It has been a rather non-dynamic weather pattern over the North Atlantic, Ireland, and the UK lately. But tonight, an unseasonably strong extratropical storm is forecast to bring quite an intense windstorm, moving in from the Bay of Biscay across the English Channel towards the North Sea. Severe winds are expected to hit northwest France first, then also southern England, and Benelux Monday night and reach the North Sea on Tuesday.

After severe weather over western Europe through late June, the weather pattern has stabilized and the weather has been rather cool for the summer period. Through early this week, the Atlantic depression is about to bring unsettled weather conditions for parts of France, England, Belgium, and across the English Channel.

The surface extratropical storm will gain strength over the Bay of Biscay this Monday, reaching its mature stage once it nears southwestern England tonight. The center of the low will be gradually moving east-northeast across southern England, ejecting into the western North Sea, and gradually dissipate towards Wednesday.

The recent deep Atlantic storm and windstorm into western Europe hit Ireland and UK with major waves on May 20th. 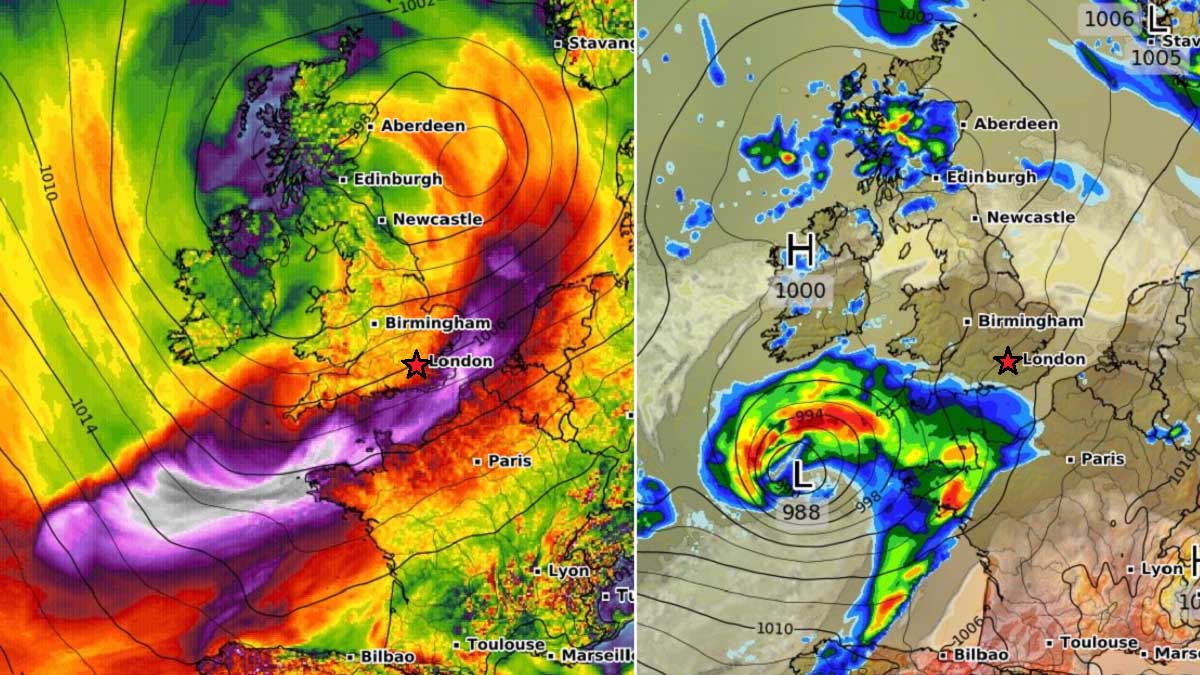 A serious windstorm threat is expected to worsen as Monday night approaches. First starting over northwestern France – Brittany region, then gradually spread across the English Channel, affecting both southern England and the coastal areas of northern France and Belgium towards Tuesday morning. Arriving on the coast of the Netherlands on Tuesday afternoon.

Attached below is the ICON-EU weather model guidance for the wind speed, precipitation, and wind gusts along the well-defined frontal system moving across western Europe over the next 48 hours, from Monday afternoon through Wednesday morning. Significant rainfall will spread into southwestern England, to the north of the low’s center.

After the extratropical storm pass, general weather conditions will improve and no dangerous weather threats are expected over this portion of Europe until the next weekend.

The general weather pattern over Europe and North Atlantic through early this week indicates a large and quite deep upper trough/low emerging into western Europe. To the east of it, an establishing upper-level ridge is expanding from the Mediterranean into the Balkan peninsula.

A much stronger upper High is already established across Scandinavia and northern Russia, with already very high temperatures across the Lapland region these days. Temperature is locally reaching into low 30s across Finnish, Swedish, and Norwegian Lapland territory. 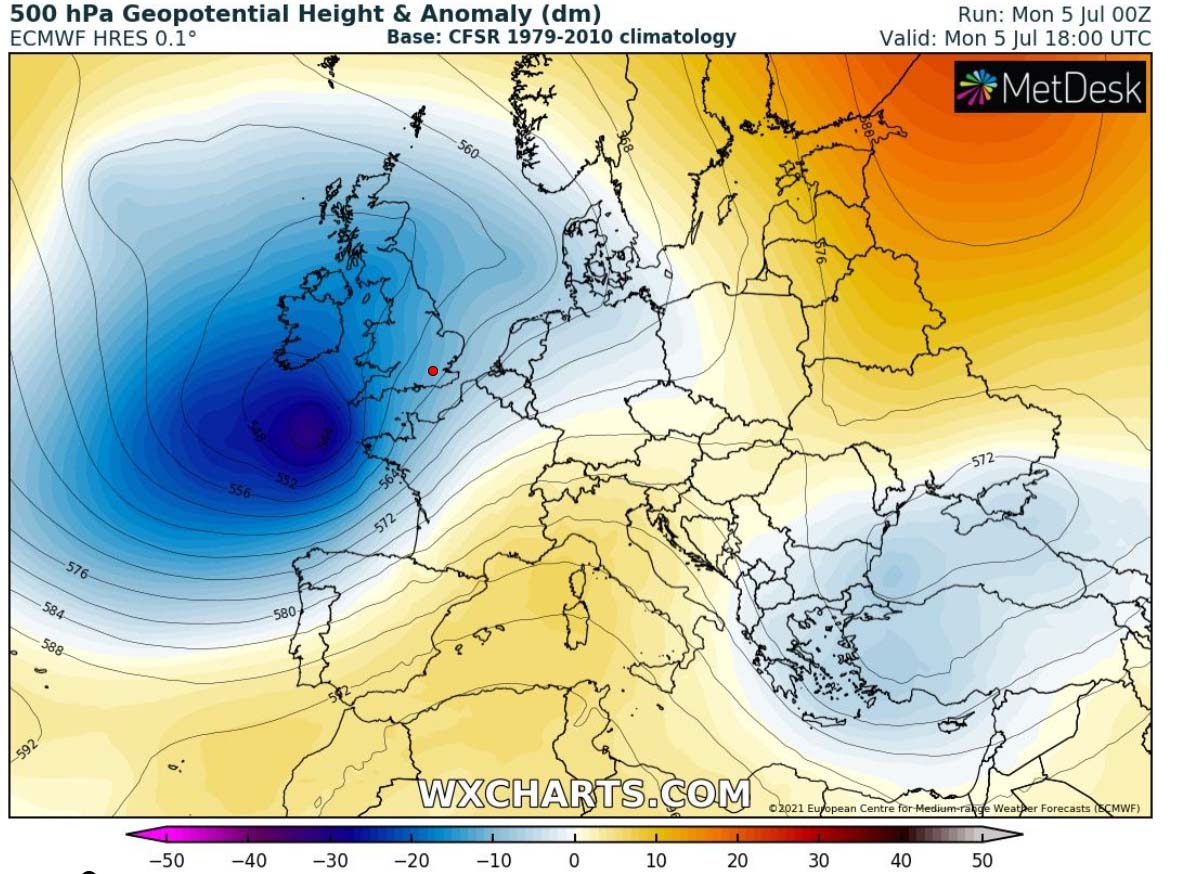 While the general pressure picture over Europe reveals a near-normal pressure across much of the continent, with two obvious large-scale features. One is the high-pressure system over northern Europe and northern Russia, while the low over the UK is pretty much the main focus point. While it travels deeper into western Europe from the North Atlantic tonight. 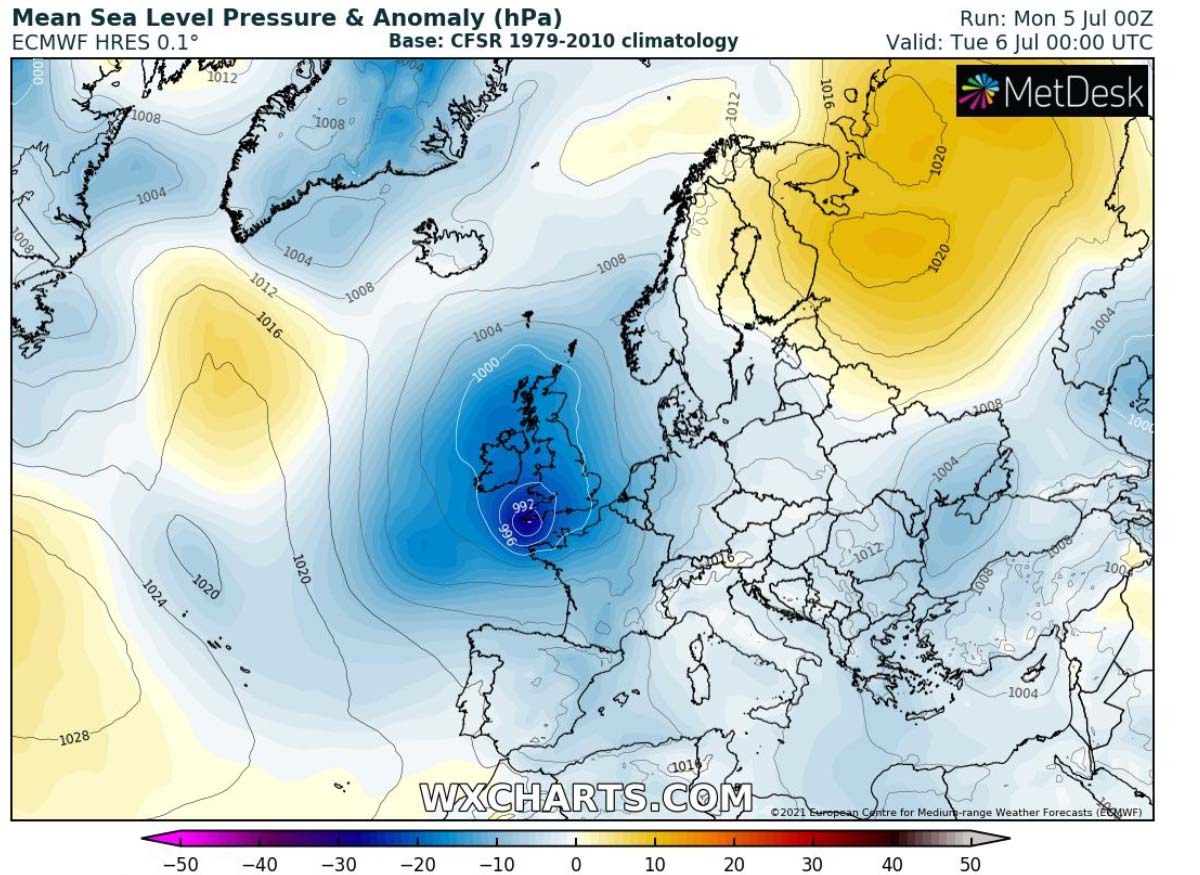 Through mid/late this week, the general pattern will develop a strengthening upper High and high-pressure system over Europe, meaning much warmer weather is likely to re-develop for some parts of the continent. A potentially significant heatwave is expected – we will hve more details later today.

ATLANTIC EXTRATROPICAL STORM FORMS OVER THE BAY OF BISCAY

In response to the deep trough entering western Europe, a surface low began forming Sunday night. It is now gaining strength while gradually drifting northeast with the general southwesterly flow. A comma cloud is developing to the north of the center low, resulting in increased precipitation that will gradually spread towards southwestern England through Monday night.

There are actually two lows visible on this satellite image, the main one and a much smaller one further southwest, with an occluded front and showery weather in cooler maritime air mass in the wake of the main extratropical storm. 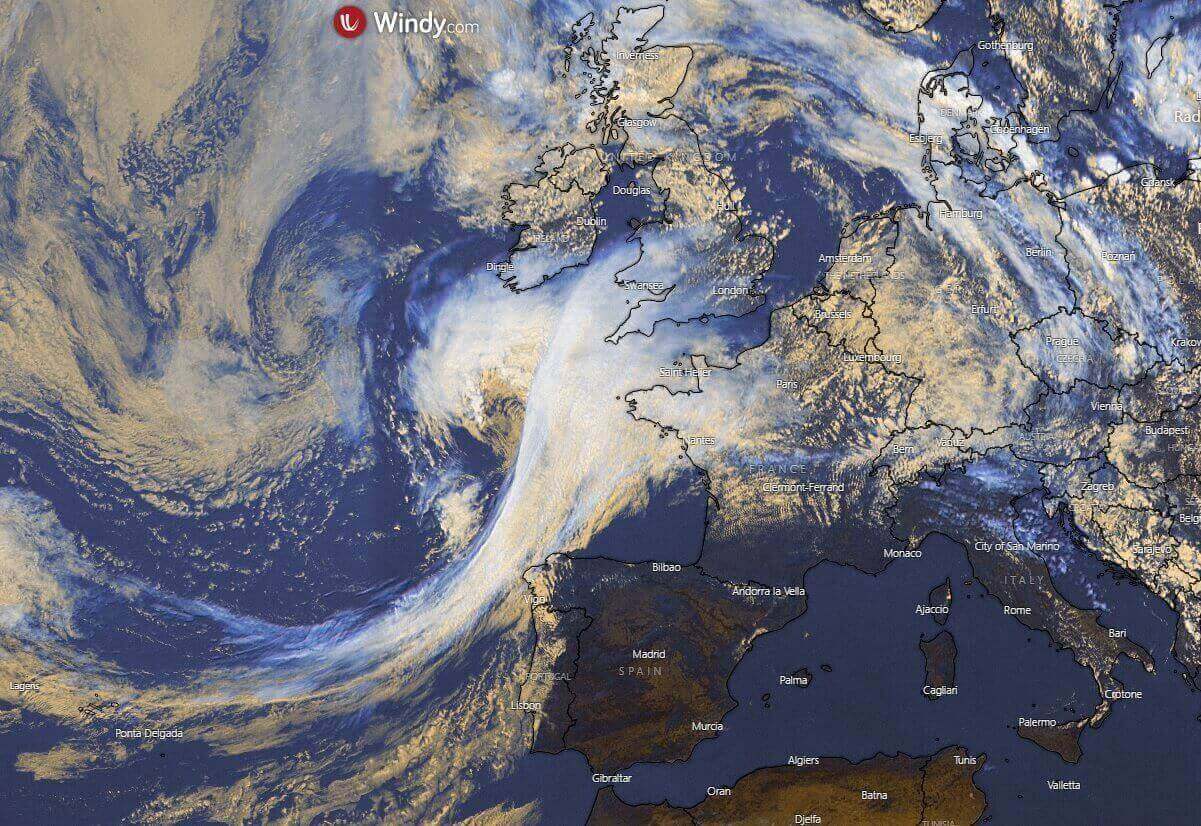 As of Monday morning, 06 UTC, the extratropical storm centered somehow in the middle of the Bay of Biscay had a central pressure of 999 mbar. Traveling northeast to the north of the large Azoric High further south. The low is expected to deepen to around 990 mbar tonight as its peak intensity will be reached. 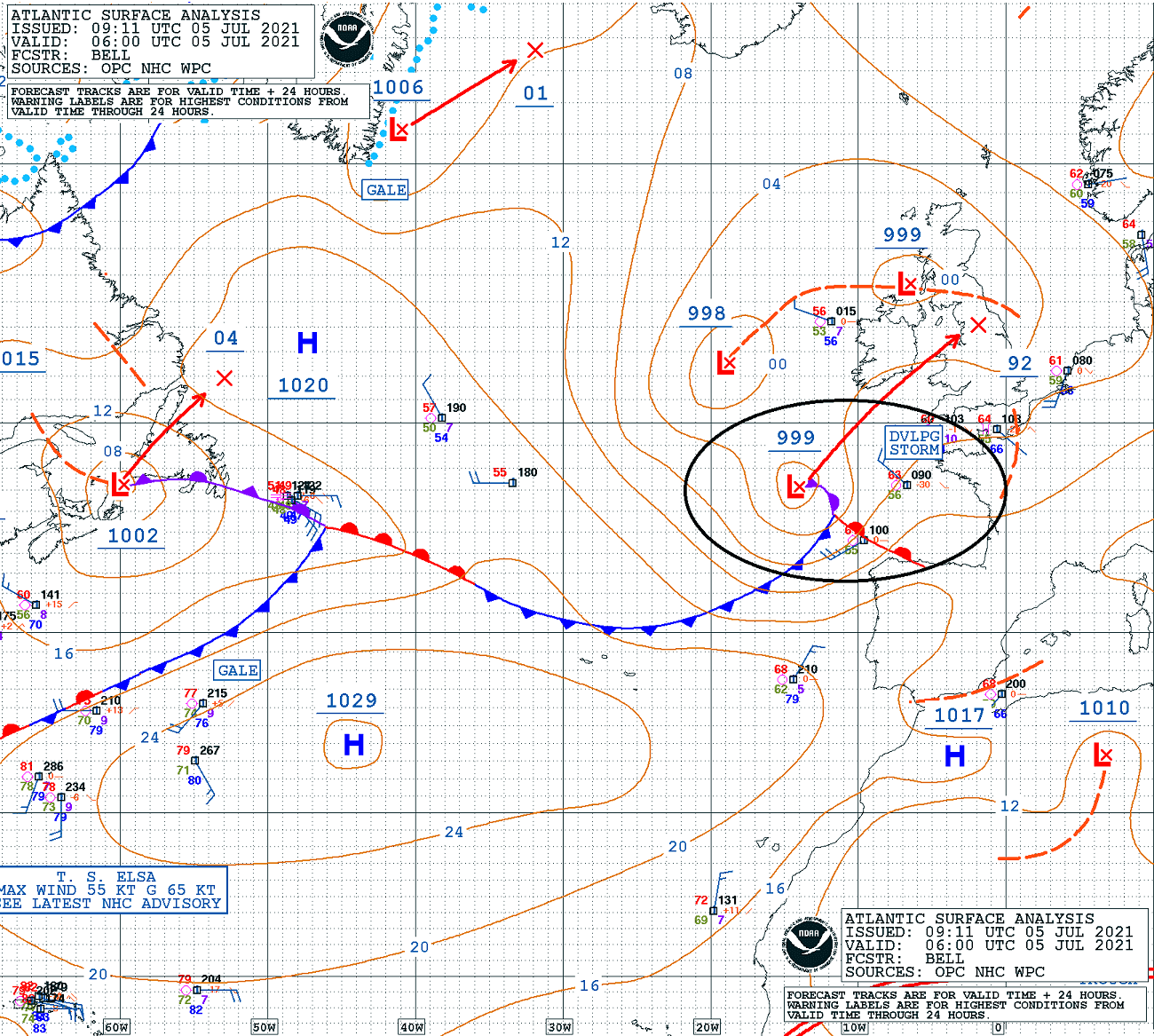 A pretty impressive appearance of a developed extratropical storm can be seen from the water vapor satellite image, emerging over the Bay of Biscay. A textbook development of a surface depression is underway, with an expected strongly organizing frontal system into the Monday evening hours and overnight to Tuesday. 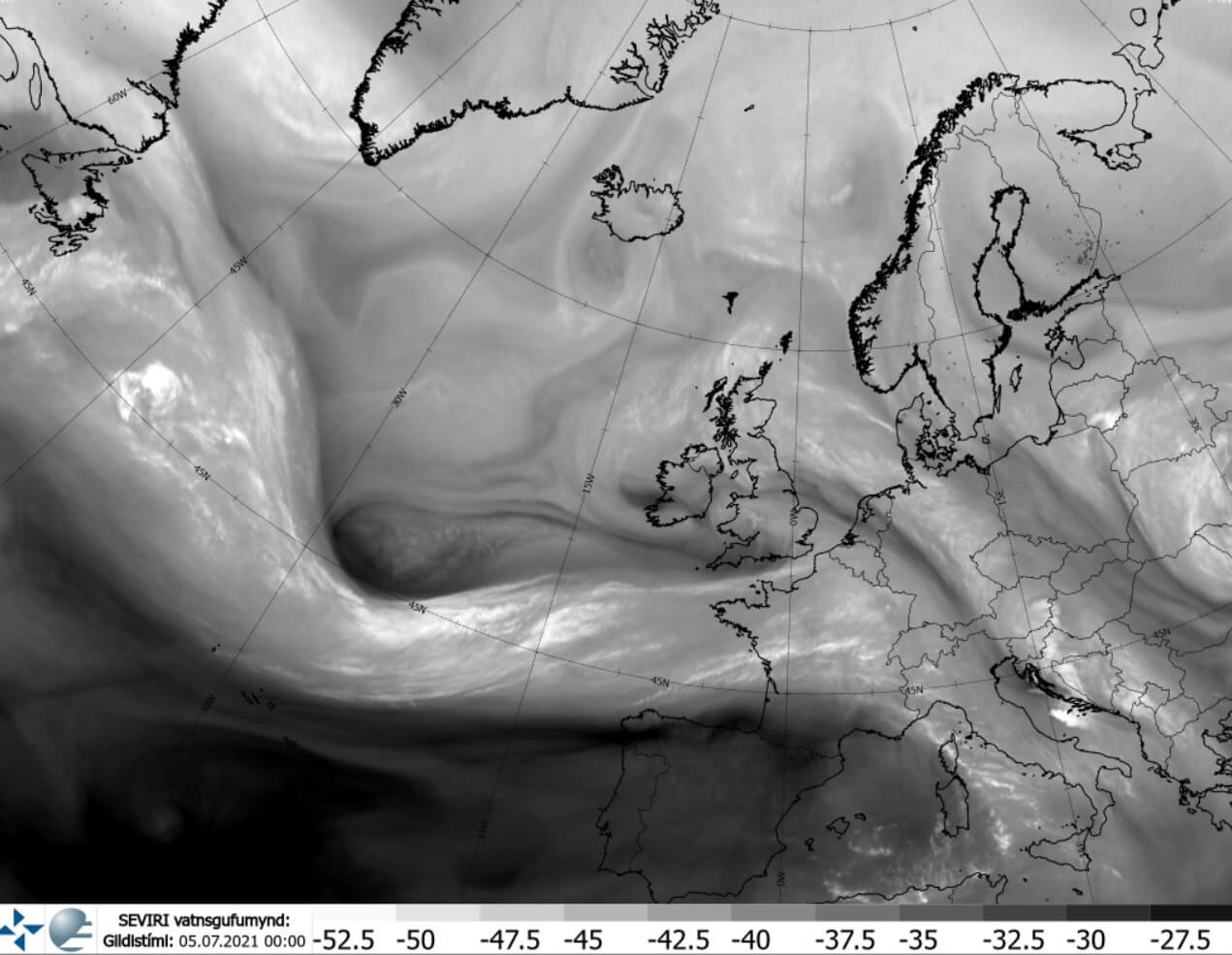 A strong jet stream can also be noticed around the deepening trough to its south. A great connection of the air masses from western Europe across the Atlantic into eastern Canada.

Through Monday afternoon/evening hours, the extratropical storm will continue deepening the central pressure and strengthening its wind field. Likely already approaching low 990s by the late afternoon hours. While the overall pressure gradient also increases towards western France into the evening. 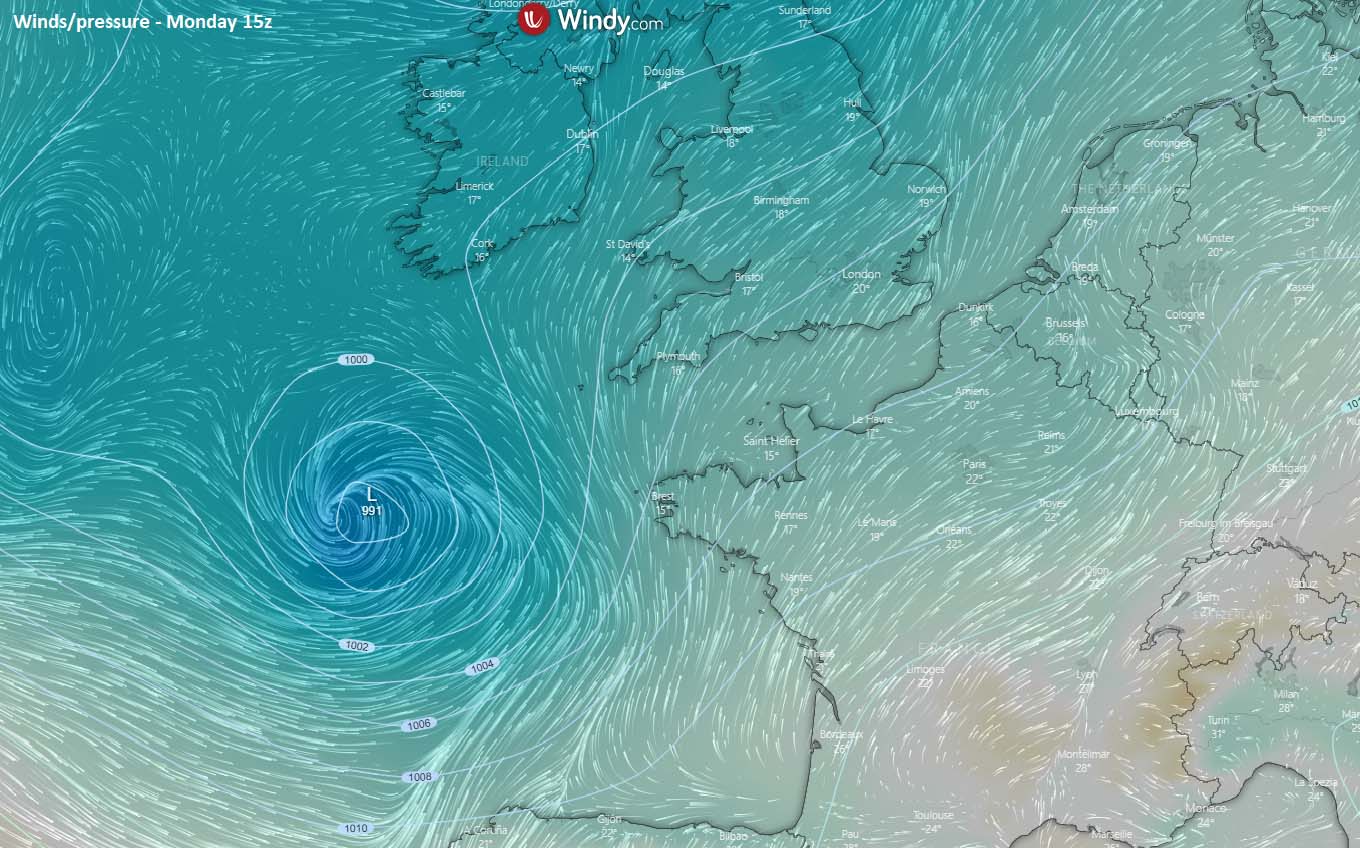 The mature stage and therefore peak intensity of the extratropical storm is expected Monday night, while the center of the low reaches southwestern England. The attached chart also hints at the general wind pattern, affecting both southern England, the western portions of the English Channel, and northwestern France.

The low will continue northeast overnight to Tuesday morning. 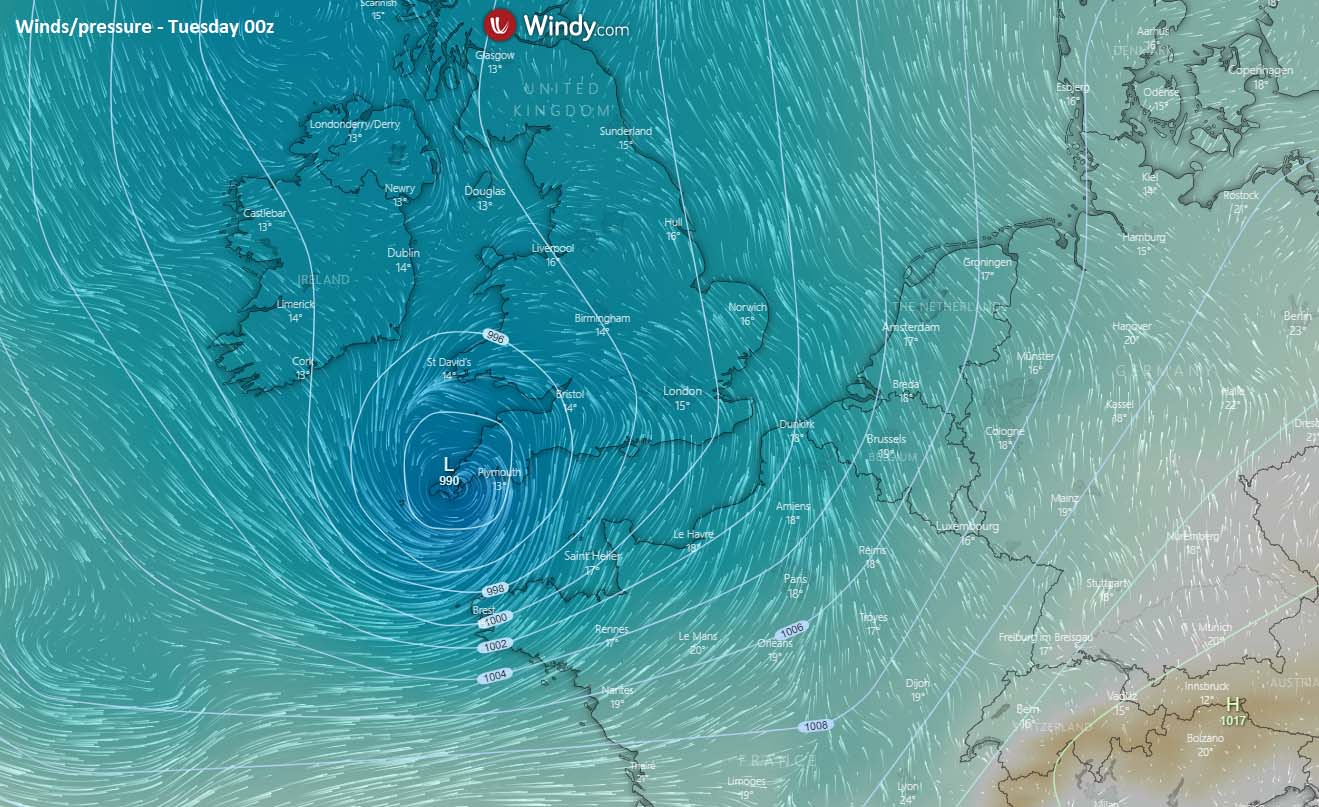 The highest winds will be severe, potentially also extremely severe, and could exceed 120 km/h (65 knots = 75 mph). The French Brittany region is especially in the right spot for the most intense wind gusts. The attached ICON-EU chart below hints at around 134 km/h peak gusts tonight.

Note, that the chart indicates the whole wind gusts swath over the next 72 hours. So it covers the full track of the extratropical storm while it travels across western Europe. 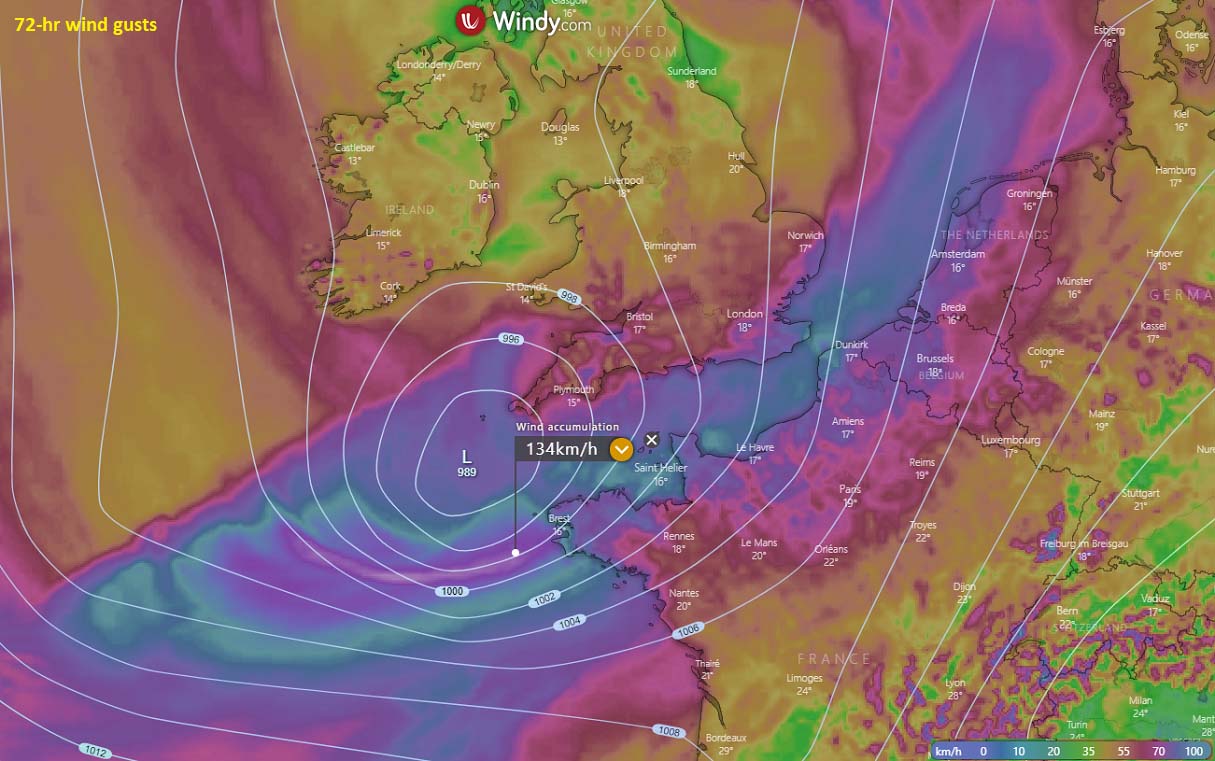 Once the low matures, its center will keep the pressure into the low 990s, while it continues northeast across south-central England on Tuesday. And finally ejecting into the North Sea on Tuesday night. The surface low should begin rising its pressure once it arrives closer or into the cooler North Sea. 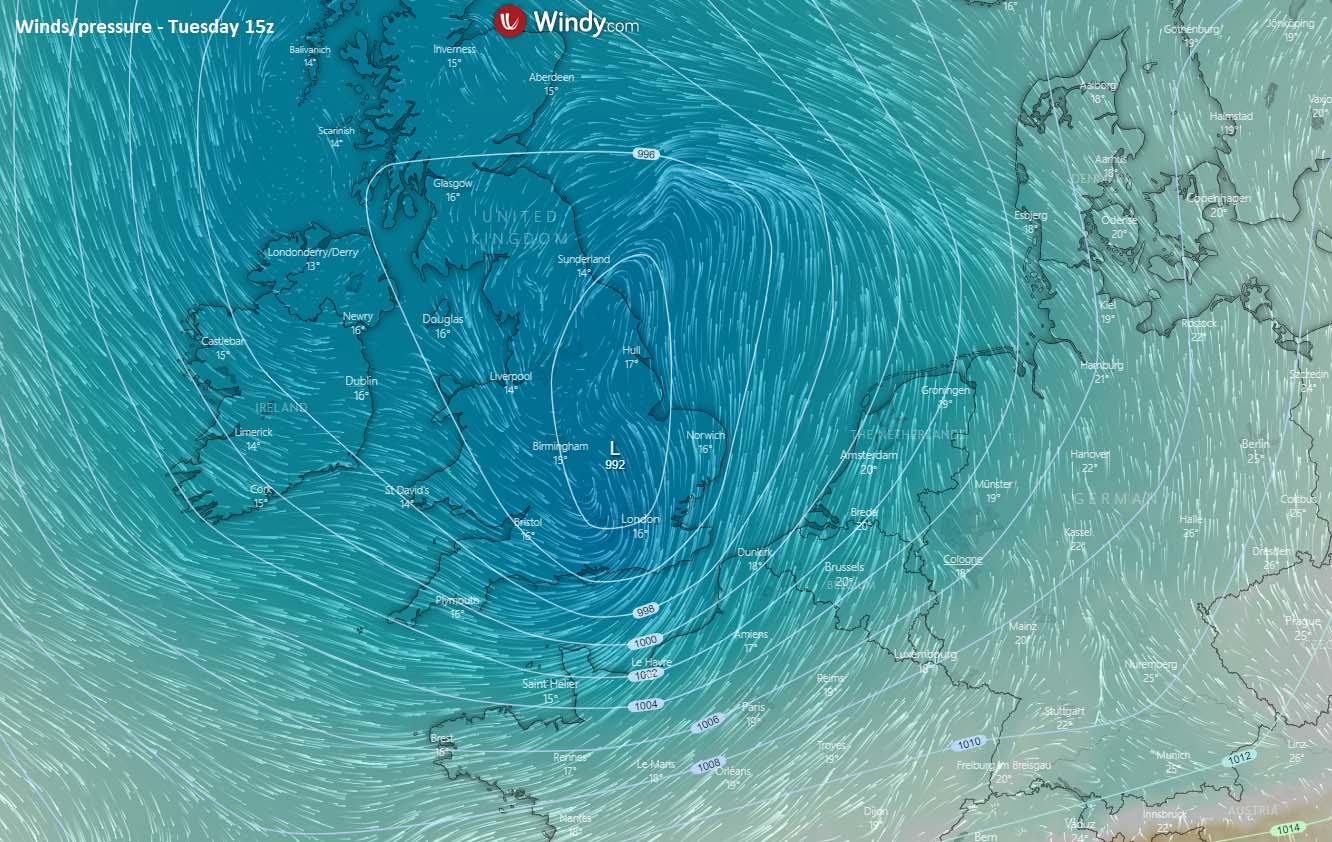 Windstorms will gradually spread across the coastal northern France, Belgium, and the coastal Netherlands through Tuesday. The peak wind gusts along the French northern coast should reach 90-110 km/h, possibly near 120 km/h in the far northeast parts where the English Channel is the narrowest.

70-90 km/h winds are likely over the extreme southerly coast of England, coastal Belgium, and the Netherlands. Severe winds should not reach Denmark as the low weakens earlier.

Normally, a large and deepening Atlantic extratropical storm and an associated windstorm also lead to significant waves. Those could generate considerably high wave heights. Likely up to 6-7 meters along the western coast of Brittany region, France.

High waves will then also spread northeast into the English Channel, reaching the southern England coast, as well as along the northern France and Belgium coastal areas. Waves will be emerging from the west-southwest directions.

Some high waves and swell are also expected along the western coast of France, while wave heights across the English Channel farther northeast should not reach significant heights, as the surface low and its wind field gradually decays into Tuesday.