The past two weeks have been very warm across parts of Europe, with locally extremely hot temperatures. Besides the scorching heat, the gradual increase in severe weather potential brought a multi-day severe thunderstorm outbreak across parts of western and central Europe. Damaging hail, winds, and flash floods were reported. Now, as we enter into the final days of June, the re-strengthening of a strong heatwave is forecast as we’re ending the first month of summer 2021.

The first significant heatwave over Europe sadly ended with a deadly tornado between Breclav and Hodonin on Thursday, June 24th, causing 4 fatalities and numerous injured people. And unfortunately also very dramatic and significant destruction to properly along its 25+ km and 200-700 meters wide path. Overturned cars, wrecked school bus, leveled houses, and wiped out forests were a result.

The general pattern over the European continent has at least mixed the air mass and washed out the huge dust cloud over southern portions of the continent. This weekend, a trough over west-southwest Europe will establish a return of strong warm advection from the deep south towards the north, therefore, rising temperatures again.

On the western edge of the strengthening ridge, severe weather potential will promote a MDT RISK for dangerous supercell storms on Monday.

After the front passage across central Europe through Thursday and Friday, cooler weather spread into western Europe behind the front. Temperatures are now staying well below the 30s, and also the potential for severe thunderstorms is significantly lower than early this week due to lack of moisture and instability.

However, the heatwave remains across the Balkan peninsula, the eastern and southeastern Europe, with temperatures above 35 °C. In the following days, at the end of June 2021, a general pattern change above Europe will establish another significant heatwave. The scorching heatwave with locally well above 35 °C will return towards the north, affecting parts of central Europe again.

Below is the animation of the temperatures in the lowest parts of the atmosphere through the final days of June 2021. It can be noticed that cooler weather remains over southwestern parts of Europe, but much hotter air mass with a strengthening heatwave re-develops towards central Europe.

The significant heatwave will also continue and even re-strengthen a bit over the Balkan peninsula and Italy, with daily peak temperatures around 40 °C on some days until the end of the month. No change in the general weather pattern is seen until the start of July 2021, so the heatwave will remain rather dry and could also gradually increase the chances for wildfires across southern parts of Europe where drought is the worst.

HEATWAVE WAS INTENSE THROUGH MID-JUNE

Our initial mid-range forecast in early June mentioned at a potentially very significant heatwave to develop over Europe into mid-June, followed by an established Omega blocking weather pattern. Temperatures were gradually pushing very high, as 30-35 °C was on daily basis. The worst-hit were the Balkan peninsula and southeast parts of Europe, with temperatures peaking even above 40 °C.

Below is the sum of the peak temperatures during this heatwave, we can see that the highest temperatures were observed over the central and southern Balkan peninsula, Italy, and far eastern and southeastern Europe. Western Russia, for example, had one of the hottest periods through mid-June. 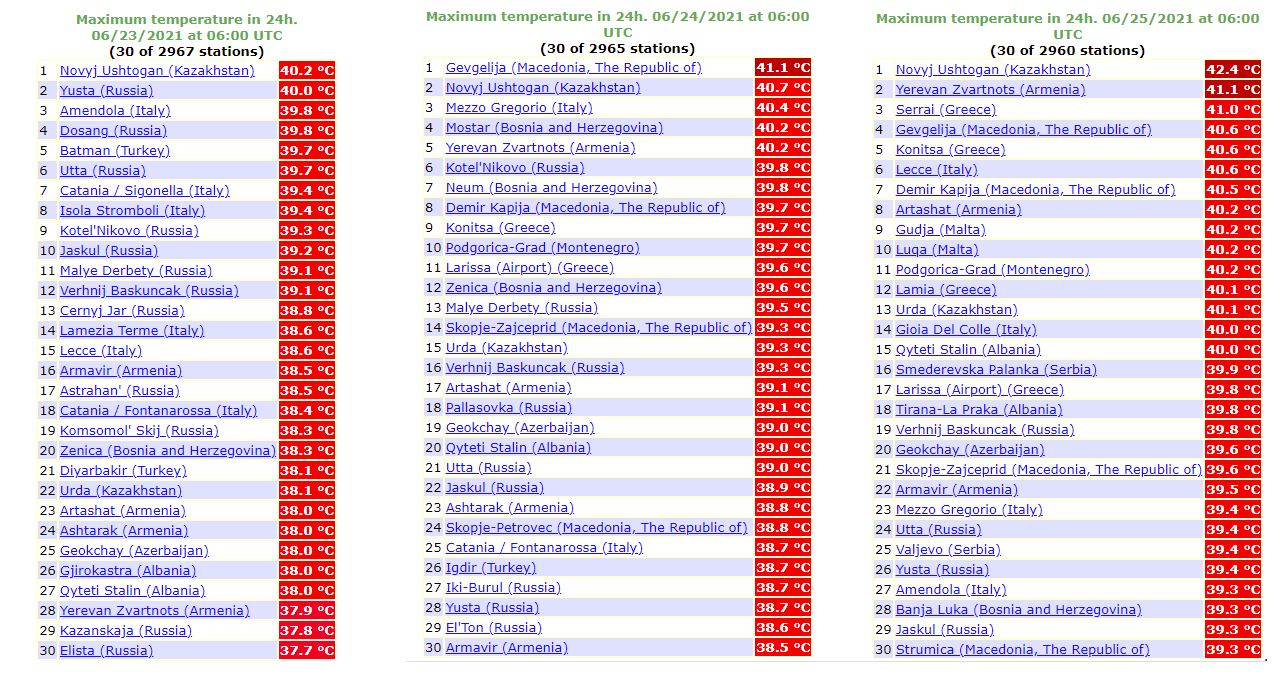 The tabular graphics above show the TOP30 weather stations with the highest temperatures over Europe from June 23rd through 25th (Wednesday – Friday this week).

While the heatwave remains over the eastern and southeastern parts of Europe, the western and large part of central Europe were finally cooling down in the past two days, thanks to the progress of the trough over the continent to the east. This brought much lower and refreshing temperatures behind the surface front, but unfortunately also a lot of severe weather with severe (giant) hail and tornadoes.

The attached chart reveals the maximum temperatures over Europe and surroundings on June 24th and 25th, with obviously lower temperatures over western and central Europe, but much warmer weather over the Balkan peninsula in particular. Hot weather is also over Iberia, but those temperatures are near-normal for the peninsula at the end of June.

Very hot weather can also be seen spread far north across eastern Europe into western Europe, with unusually hot weather for late June. Even hotter weather is seen across the Middle East, and indeed over Algeria and Tunisia, pushing unto the mid to upper 40s.

The soil has become pretty dry in some parts of Europe lately, which could soon enhance the wildfire threats if the pattern continues. But there is also another side effect of a significant heatwave.

The attached sea temperature anomaly chart below is actually very concerning. The persistent strong heat and very high temperatures are warming up the seas as well. The Mediterranean sea is already very warm, with a temperature anomaly of 3-5 °C above the long-term average across the central and especially northern parts. 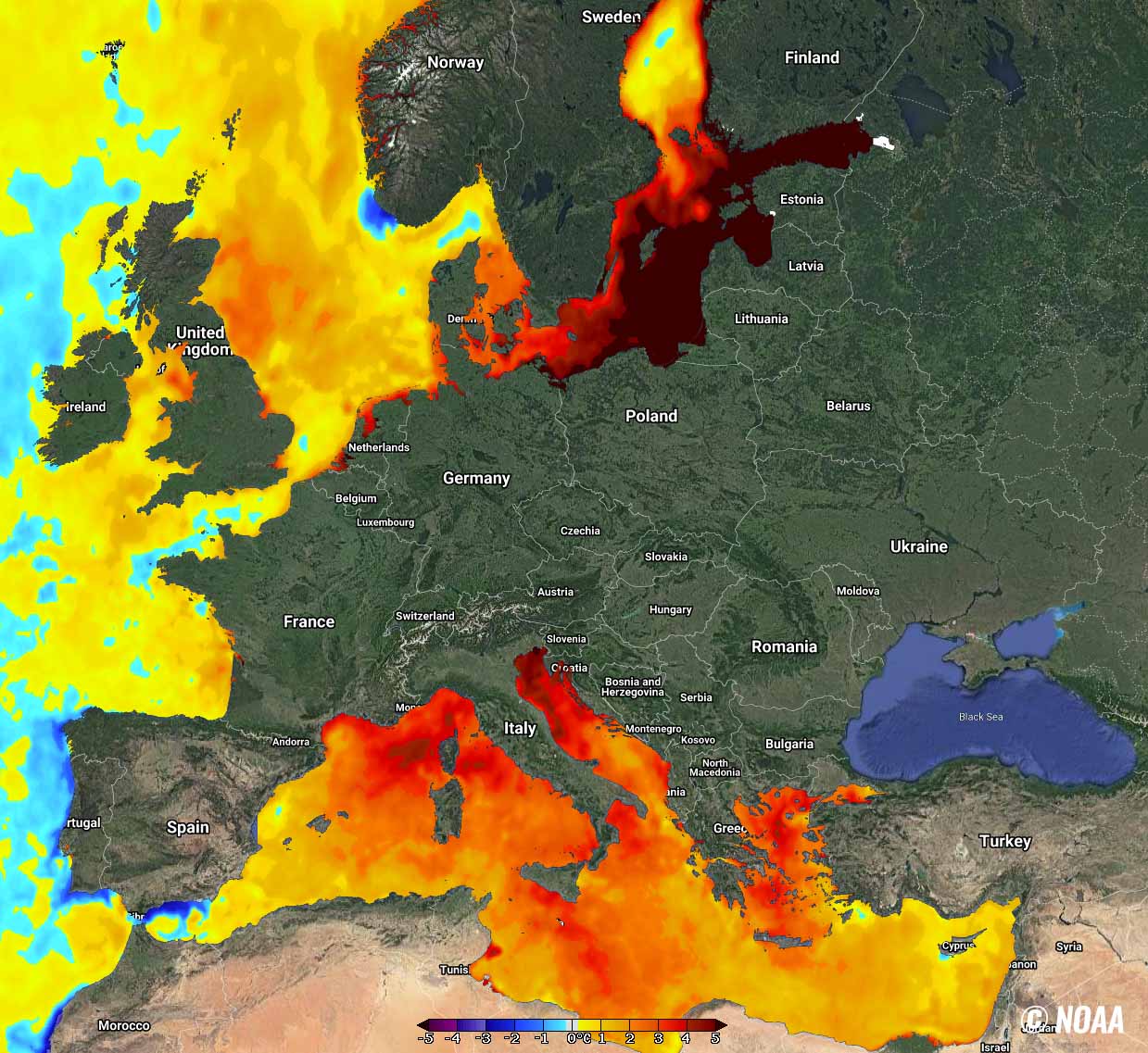 What grabs our eye’s attention is an *extreme* temperature anomaly developed over the Baltic sea. Most of the region has more than 5 °C warmer sea waters than normal for the end of June. While also the rest of the sea waters around Europe are mostly warmer.

Note that (very) warm seas are a significant source of high moisture, which reflects the highest dewpoints and higher instability at the end. In other words, this means that the next frontal systems could be fueled with much higher moisture and lead to strong thunderstorms. High instability is often the cause for giant hail in Europe.

While at the end of summer, when the seas are typically the warmest, very high dewpoints lead to extreme flooding events across eastern Iberia, southern France, the southern Alpine flank, Italy, and the western Balkan peninsula.

HEATWAVE RE-STRENGTHENS INTO THE END OF JUNE, SEVERE THUNDERSTORMS RETURN

Coming up in the following days, the general pattern over Europe is again establishing a favorable circulation for a strong warm advection from the south towards the north. Attached below is the 500 mbar chart for Monday morning, indicating a quite deep upper low over the Bay of Biscay. But a strengthening upper-level ridge ahead of it to its east. 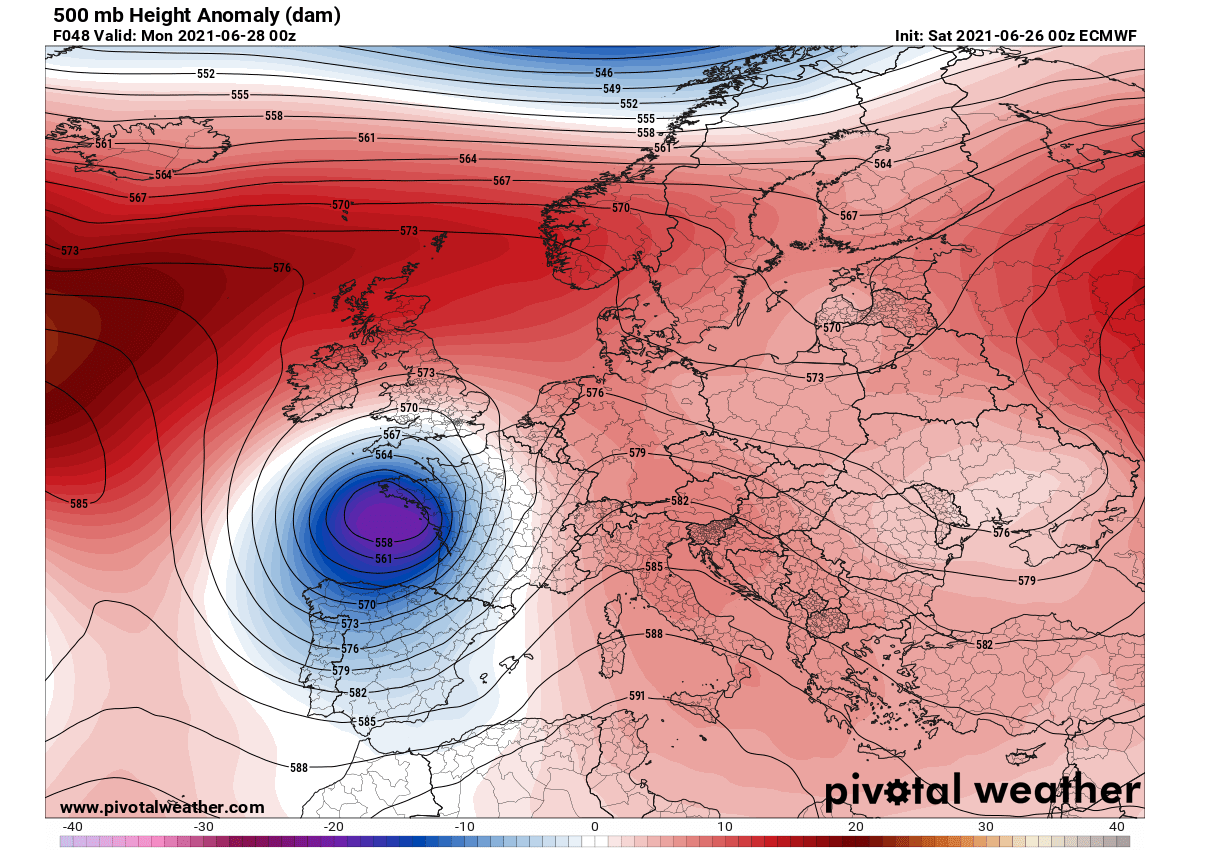 This means that a stronger warm advection will take place from the Mediterranean into the Balkan peninsula and central Europe. We can see how most of Europe has the upper-level pattern quite warmer, so more stable weather is also expected for at least a few days.

Early this coming final week of June, the only part of Europe with below-normal temperatures will be part of France and the Iberian peninsula, thanks to the upper low aloft. The rest of Europe will experience about 4-8 °C warmer weather than normal. 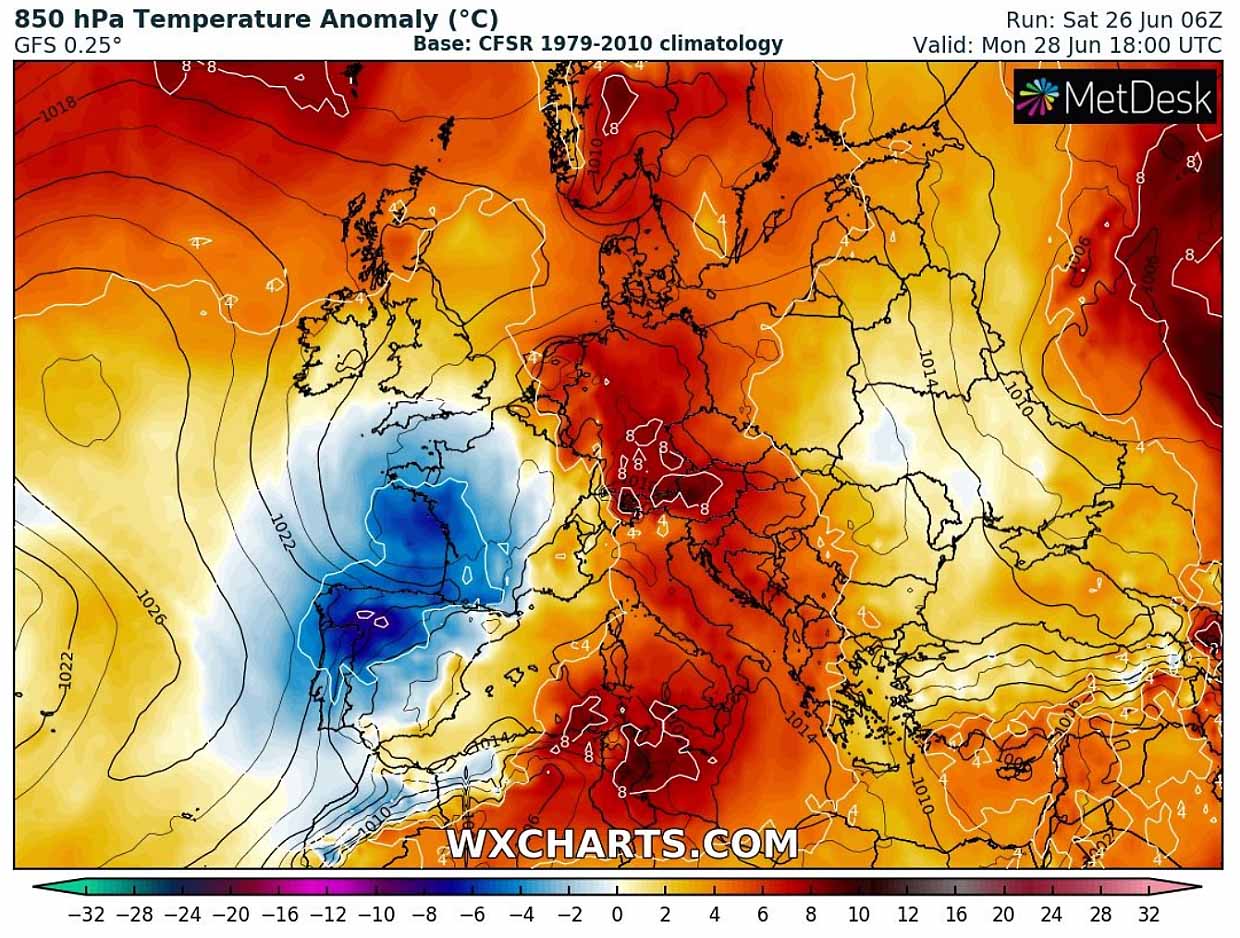 Such a weather pattern position also means that the moisture will rather a quick return to the northern side of the Alps, meaning thunderstorm chances will again increase over Benelux, Germany, Austria, and also the Czech Republic through Monday and Tuesday. Instability should quickly build up again and could lead to additional severe thunderstorms on both days.

Further south over the Mediterranean and the Balkan peninsula, a scorching heatwave will continue. The areas which are typically bringing the highest temperatures in summer are marked. There, temperatures could again approach 40 °C or even exceed the threshold in the coming days. Those include Italy and parts of the central Balkans.

As June goes into its final day through mid-week, the general weather pattern over Europe does not change much, with only minor changes. The deep upper low over France weakens but also grows bigger, so it keeps the temperatures lower over western Europe.

The upper ridge over the Mediterranean, the Balkan peninsula, and eastern Europe will remain.

Notice there is also a very powerful ridge over the North Atlantic, with a significant blocking high between the UK and Iceland. This helps the general flow from the north-northeast into the North Atlantic, the UK, and Ireland, limiting the potential for much warmer weather there for now.

Under the upper ridge, the scorching heatwave remains over the Balkan peninsula through mid-week and temperatures are expected to reach around 40 °C over southern Italy and possibly also over Serbia, North Macedonia, Greece, and western Turkey. 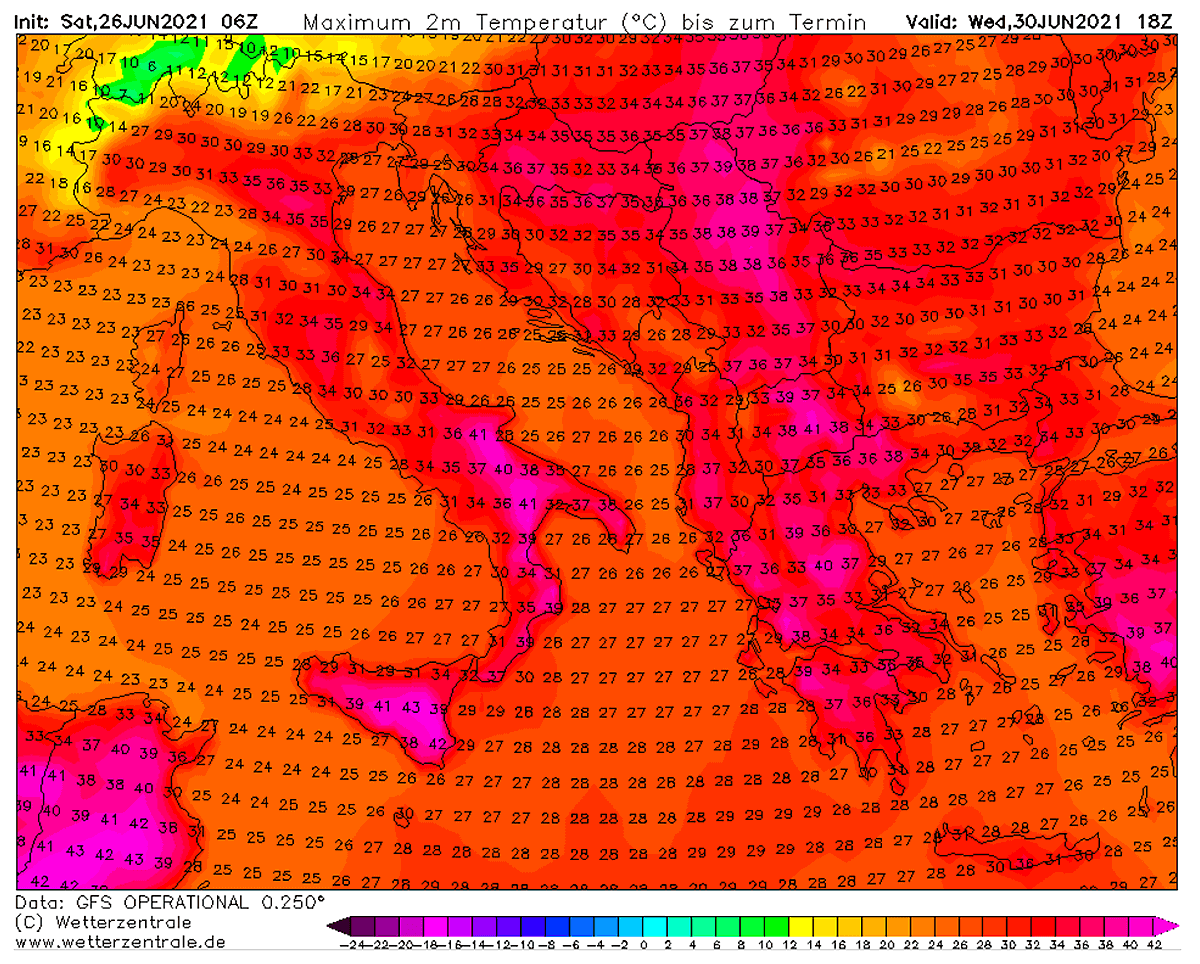 Once we are done with the first month of summer 2021, the overall pattern over the European continent might change. At least what the recent model guidance of both the GFS and ECMWF global models are hinting.

There are now hints that some, let’s say refreshing, changes could be on the menu as we enter the second month of this summer. The general weather pattern over Europe could be seeing some big changes late this next week and towards the weekend.

The very powerful North Atlantic High will be gradually expanding towards northern Europe and the Arctic region, which typically turns the flow for the European continent to the northeast. This could mean the end of this powerful June heatwave and more normal and refreshing temperatures for many. 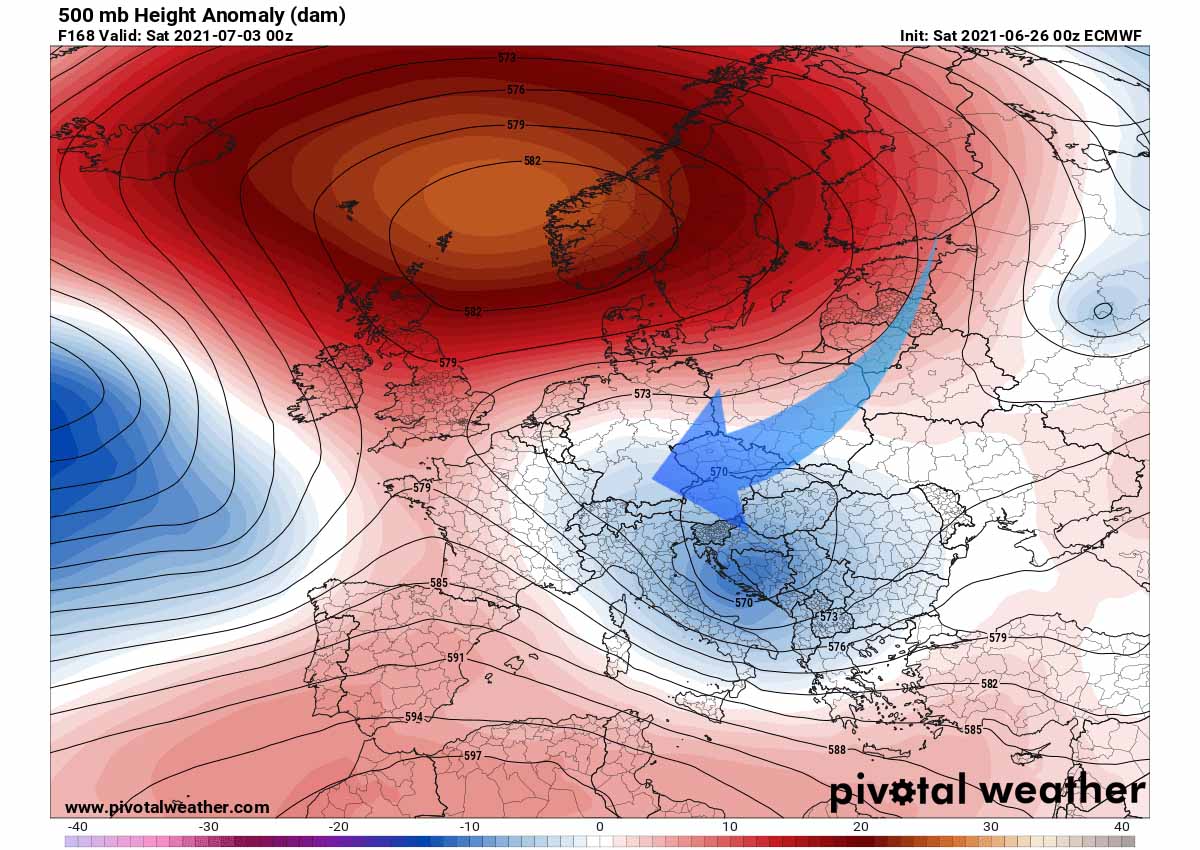 Even an increasing chance for a much-needed rainfall for the Balkan peninsula or possibly also the Mediterranean. The drought in these areas is normally an issue during the summer months, but it has worsened this year as a long-lasting period of stable pattern and lack of precipitation is not seeing an end yet.

If we take a look over the GFS Meteogram ensemble forecast chart for the Mediterranean, central Europe, and the Balkan peninsula over the next 14 days, hints are at the continuing dry weather at least until July. Attached below are ensemble forecasts for Munich, Germany (upper left), Rome, Italy (upper right), Belgrade, Serbia (bottom left), and Athens, Greece (bottom right). 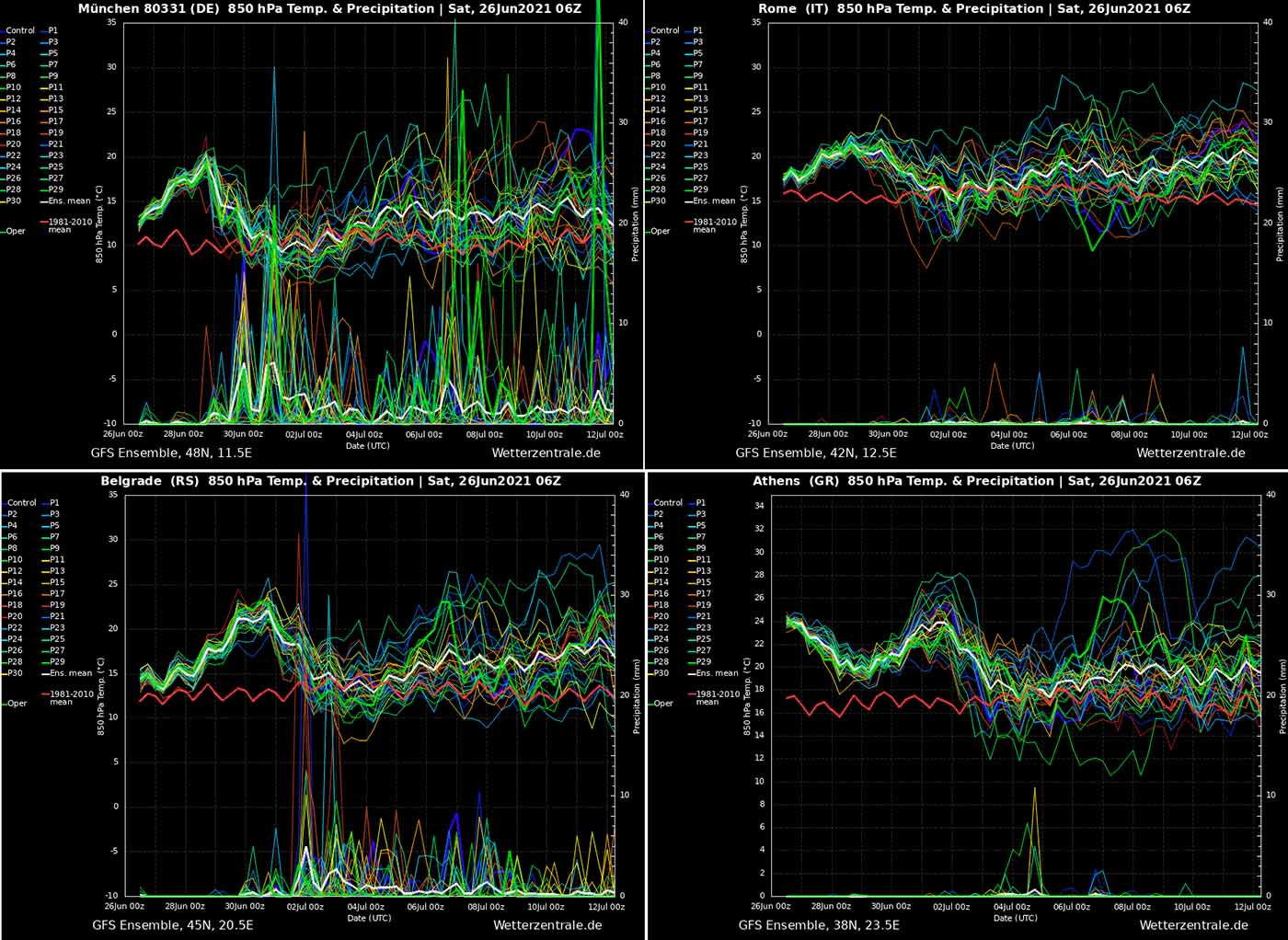 Munich chart is showing increasing chances for rainfall, as well for Belgrade. Whole Rome in central Italy and Athens both have very low to almost non-existing chances for rainfall over the next 10-14 days. All 4 Meteograms do show above-normal temperatures to continue through the last week of June, returning to about normal as of July starts.

Enrique becomes the first hurricane of season 2021, heads for the Baja California peninsula while threatening Mexico with dangerous flooding