Tropical weather across the western Pacific has ramped up lately. After a powerful typhoon Bavi last week, a new extremely dangerous super typhoon Maysak formed and is expected to pass very near Kumejima Island, Japan tonight. Okinawa will also be affected. Then, Maysak crosses the East China Sea and haad for South Korea landfall on Wednesday.

Maysak is packing maximum sustained winds of 105 knots (120 mph / 195 km/h). The minimum central pressure was around 944 mbar, based on the latest JTWC update. The system is rapidly intensifying and deepening. Its destructive force will soon hit Kumejima. 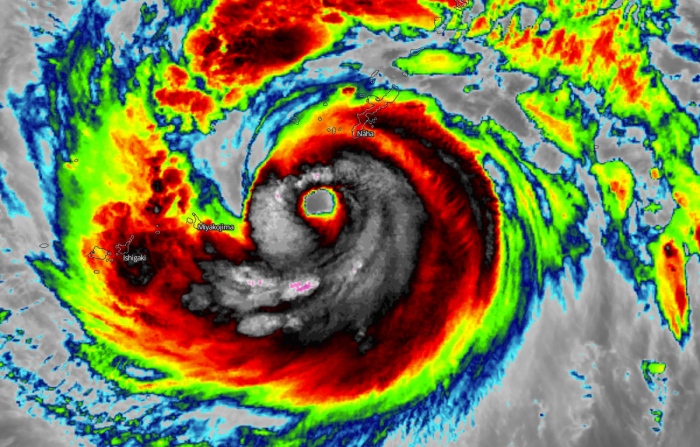 Super Typhoon Maysak is currently located just south of a small Japanese island Kumejima. Its eye will likely pass very near or directly over the island tonight. Okinawa island to its immediate east will also be significantly affected.

A large eye is visible, surrounded by very intense Cloud Density Overcast (COD). The eyewall is violent, but partly broken on the southern part. The outer bands are affecting Okinawa, while the center is moving towards Kumejima. 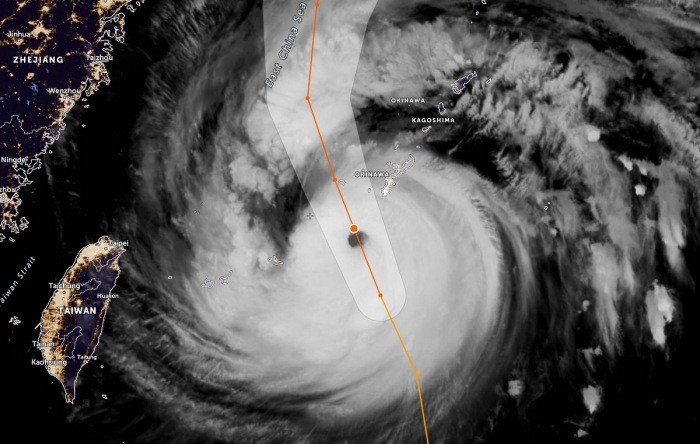 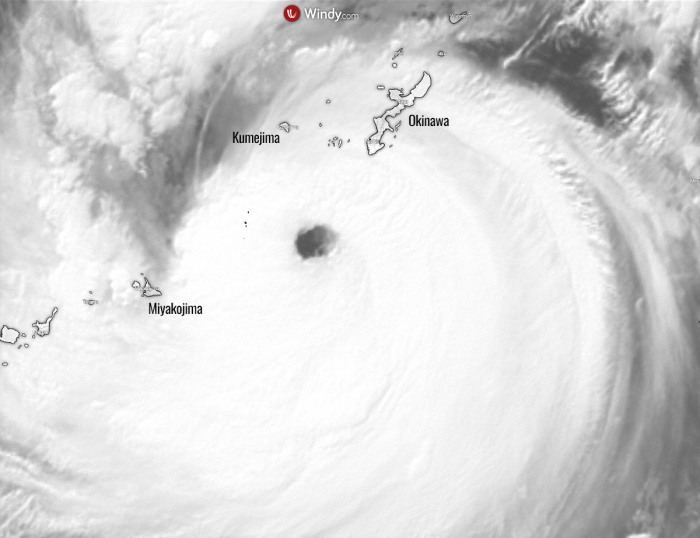 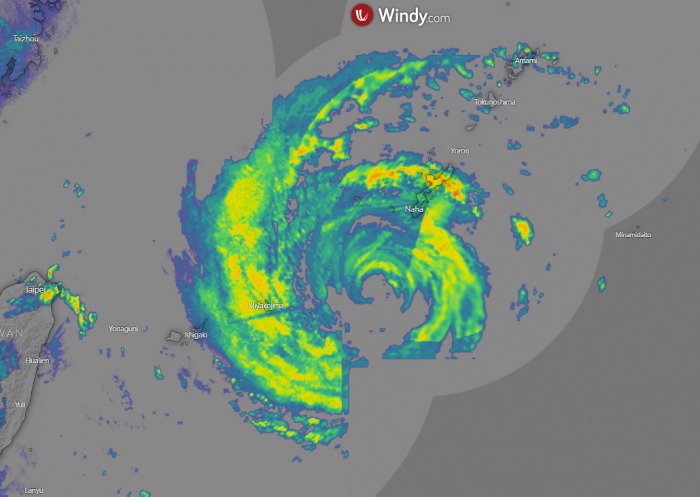 The ADT analysis is estimating that typhoon Maysak already has around 115 knots of maximum sustained winds. The central pressure is around 933 mbar. Dvorak Final T number is 6.0, while Maysak is rapidly intensifying. Especially over the last 12-24 hours.

Hot western Pacific Ocean waters are providing a lot of fuel for explosive storms. Very favorable conditions should remain for another 24 hours which should allow typhoon Maysak to intensify further.

Additionally, very warm waters of the East China Sea should remain conducive for the additional strengthening of the system after it passes over Kumejima. Maysak could become a very powerful Super typhoon and reach 120-130 knots winds on Tuesday.

Super Typhoon Maysak will be moving mostly due north across the Kumejima tonight and enter the East China Sea on Tuesday morning. Then, it will gradually take a more northeasterly track and continue just a shy west of Kyushu island, Japan.

After passing near Kyushu, Maysak will continue north-northeast towards the potentially destructive landfall in South Korea on Wednesday.

All weather models are in a very good agreement Maysak is likely to make landfall in South Korea. Given the very favorable environment along its track and expected further strengthening on Tuesday, Maysak could be devastating for the coast of Kyushu island and South Korea. 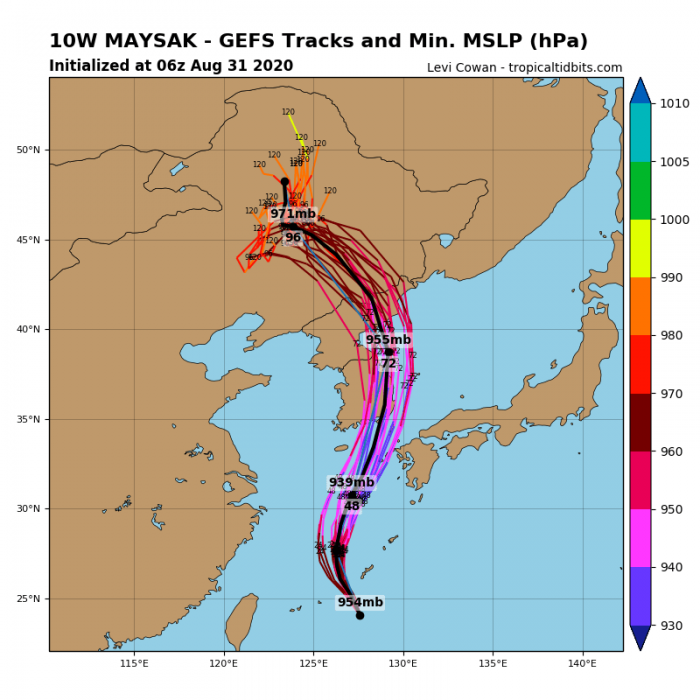 Here is the position of Maysak per HWRF model. It will be over the East China Sea on Tuesday and making landfall in South Korea on Wednesday. 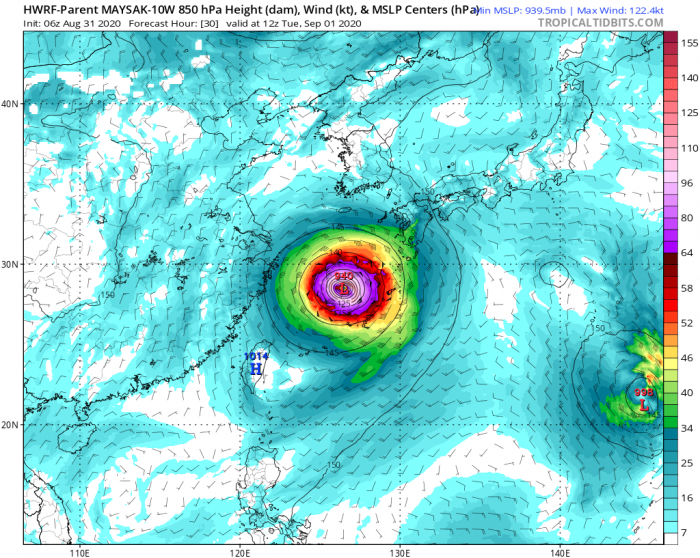 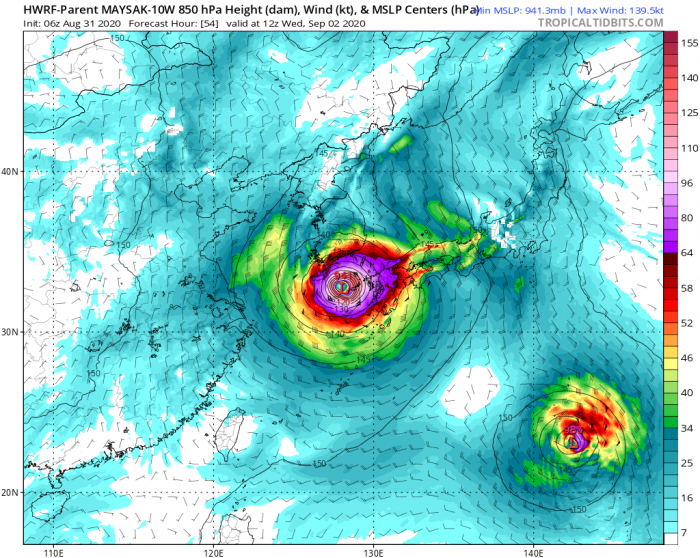 After the landfall, Maysak will remain a strong typhoon while moving across the eastern parts of South Korea and could also reach North Korea on Thursday.

With the Super Typhoon Maysak crossing the very warm East China Sea on Tuesday, its size and intensity will become even stronger. The effect on Kyushu, Kumejima, part of Okinawa, and South Korea will be significant. Winds within the eyewall will be violent! 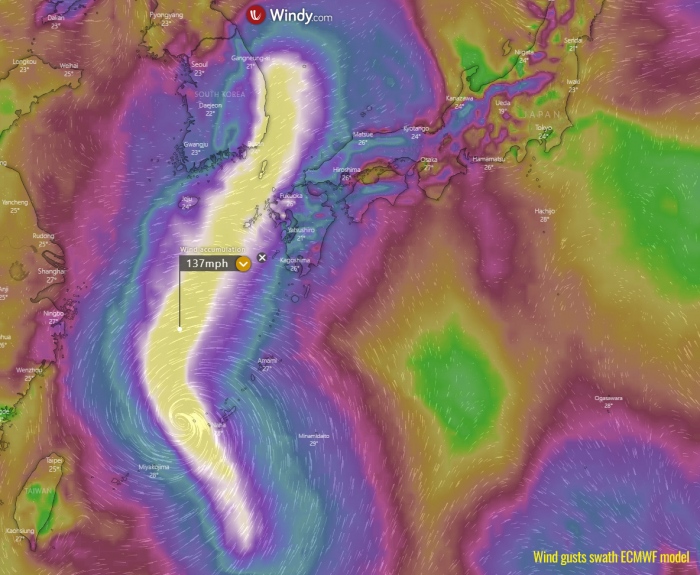 Along with the northward movement, the western coast of Kyushu island and south/east part of South Korea will be under severe winds threat. Although Maysak is expected to begin gradually weakening prior to its landfall on Wednesday, it will remain a very intense typhoon and landfall will be significant! 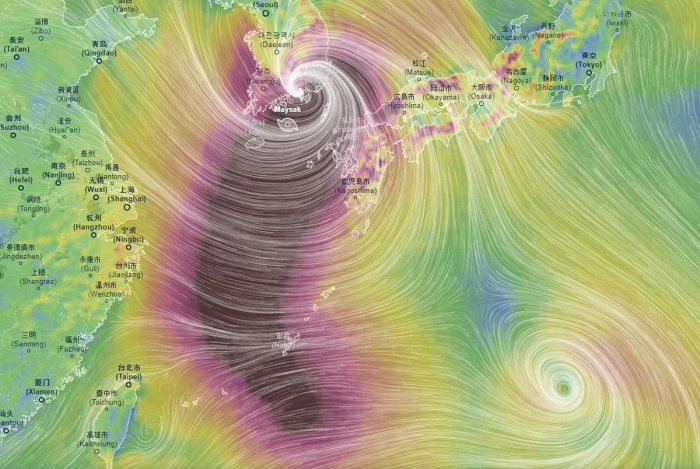 Huge amounts of rainfall are expected along Maysak’s path. Although its center will be traveling west of Okinawa, a lot of rain in expected there. Kumejima will receive 200-300 mm in rainfall over the 3 days. Flooding will be significant. 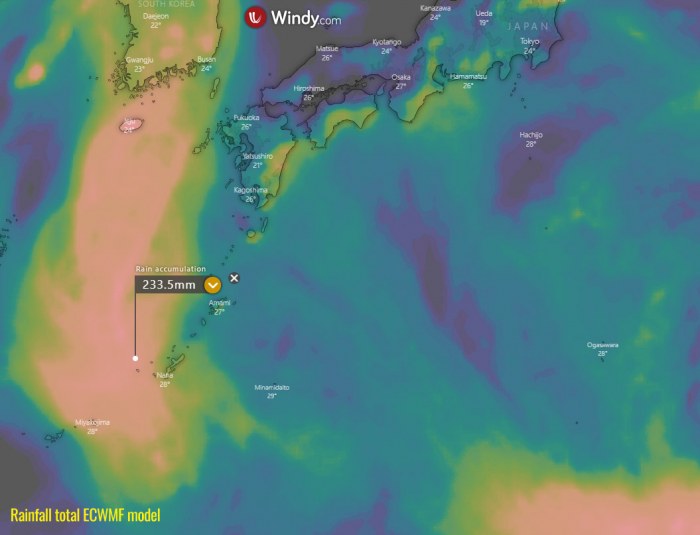 The highest amount (300-400 mm) of rainfall is likely to be expected over the East China Sea, however. Away from any land areas. But with Maysak’s approach to western Kyushu, Jeju island and South Korea, widespread rainfall threat and flooding develops there as well.

We are monitoring the further development of this extremely dangerous typhoon Maysak – stay tuned for additional updates on Tuesday!