Currently, there is a Super Typhoon Maysak ongoing over the East China Sea, on its way north towards its strike on western Kyushu island and South Korea. Another, potential a violent typhoon is expected to form and head for Japan this weekend. A tropical storm Haishen develops north of the Marianas and could become the strongest Earth’s typhoon of the 2020 Pacific season.

According to the latest weather models, Haishen could become an extremely powerful typhoon over the next days and strike western Japan on Monday next week.

The long-term model forecasts suggest that the forthcoming typhoon Haishen could then continue towards the Korean Peninsula as well. Just shortly after the landfall of typhoon Maysak coming up this week. Haishen could worsen the flooding conditions over South Korea if its track will go for a landfall where Maysak will strike.

A large part of the Western Pacific is extremely warm. That is exactly where the new typhoon will track. The sea waters are literally boiling hot! Sea surface temperatures of 30-31 °C are spread along southern Japan, over the Marianas and the Philippine Sea.

The sea waters are very much above the normal long-term average through early September. Nearly 3 degrees Celsius warmer. This means the oceanic conditions are beyond exceptional. It is quite likely that these conditions will help the Haishen to become a violent typhoon and turn towards Japan. 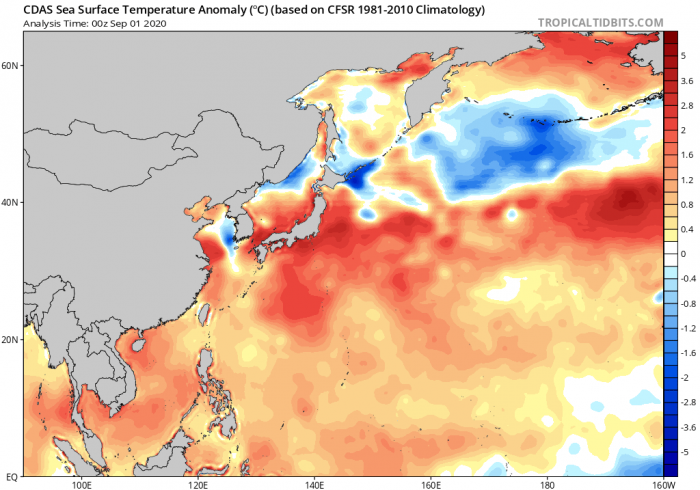 Haishen will be tracking over these extremely favorable oceanic conditions through its whole lifecycle. After the weekend, the system finally nears Japan’s Kyushu Island. It is important to note the conditions between forecast hours 48 and 96 are above 150. Such Ocean Heat Content (OHC) values often contribute to a very rapid intensification of tropical systems. 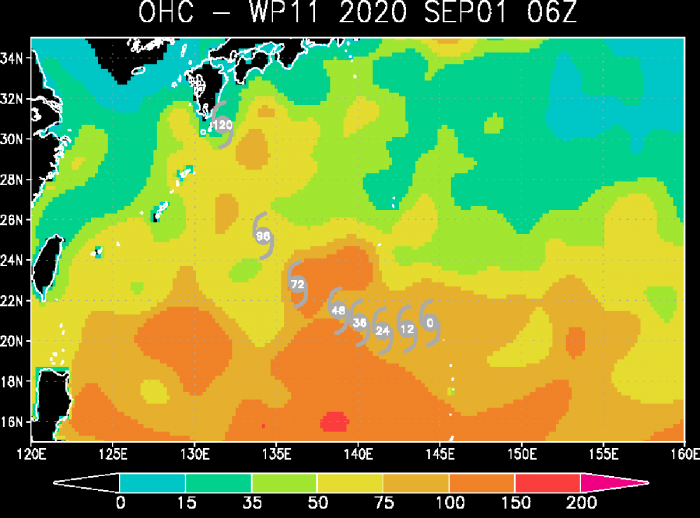 We could be seeing Heishen’s extreme deepening and strengthening through Thursday and Friday. The potential is definitely there the system becomes a powerful Category 4 system. Eventually, it might even become the Category 5 equivalent storm!

Haishen is forecast to track west-southwest over the next 24 hours, while gradually organizing and strengthening. Then, a more west-northwest track establishes and the system enters those hot ocean waters. Explosive development into a powerful typhoon is likely. 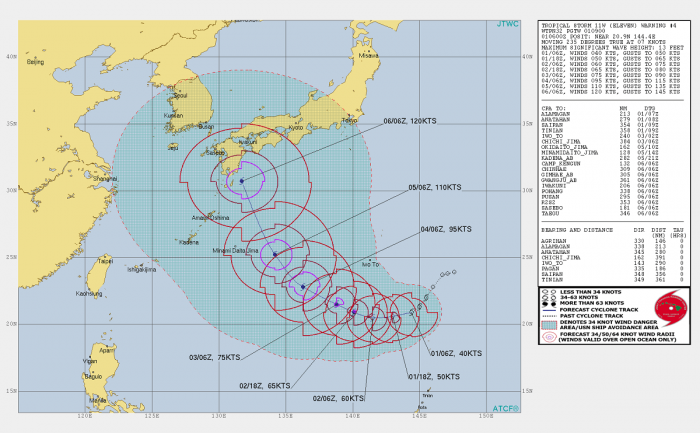 The overall very low deep-layer shear will have no effect on the system’s further strengthening. So a very rapid intensification is expected around Thursday, Sept 3rd, and continue into the weekend. The JTWC forecast suggests, Haishen will become a violent typhoon and head towards Japan.

Most of the weather models in the ensemble forecast agree on the northwesterly track through the rest of this week, with some potential that the track shifts more to the west or even east. However, the majority of the ensemble model tracks are hinting that Haishen will be moving straight towards Kyushu Island. 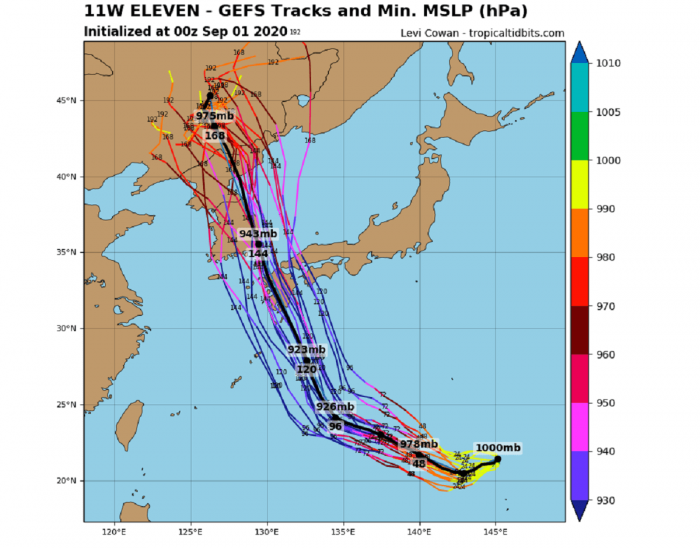 What the weather models are simulating is a real concern. The paths and the potential landfall of both, the ongoing typhoon Maysak and developing Haishen, could strike Kyushu island (Japan) and South Korea. Just days apart.

An extremely dangerous situation is therefore developing as the region might be severely hit by violent winds and flooding. Attached are the wind swath comparison charts by ECMWF and GFS models. 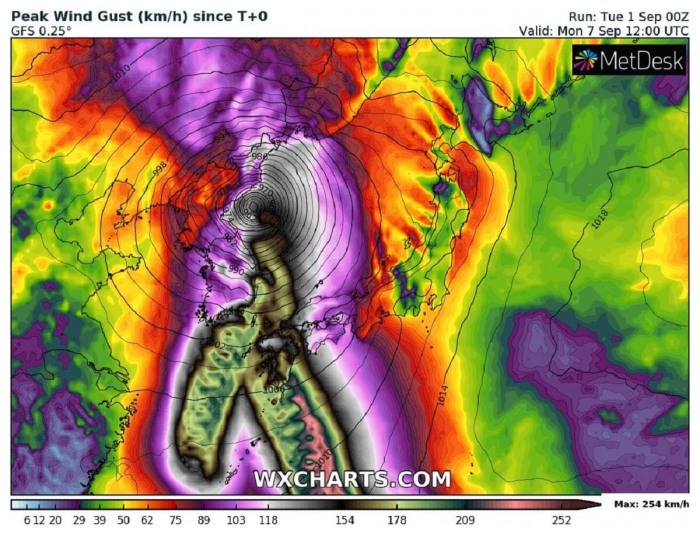 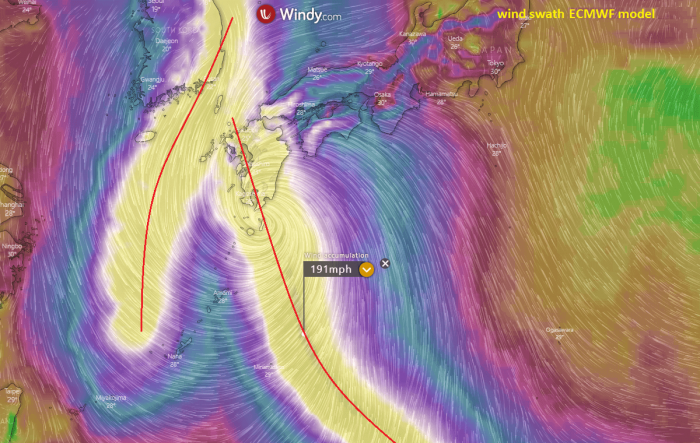 On the attached map by Ventusky, we can see that the whole region will be affected by both typhoons, Maysak and Haishen. A significant amount of rainfall is likely to be expected across Kyushu island, and across the Korean peninsula. The amount of rain is indeed very hard to forecast, as the exact tracks of Haishen are still uncertain. 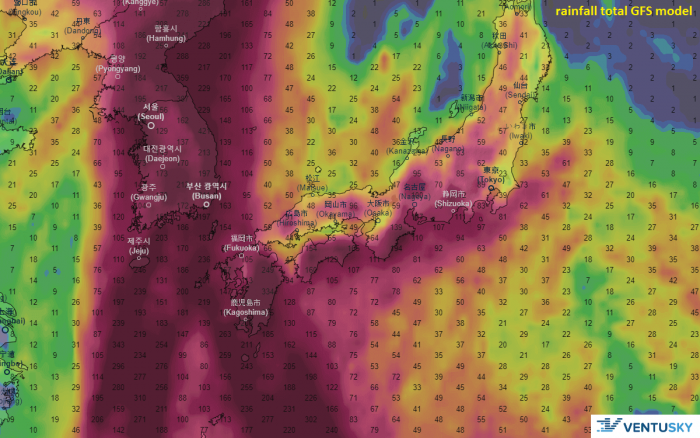 The storm could track across Kyushu, but might also turn further east or even west and head for its first landfall in South Korea. Nevertheless, the amount of rain will be extreme. Potentially 300-500 mm in many areas, leading to dangerous flooding threats. 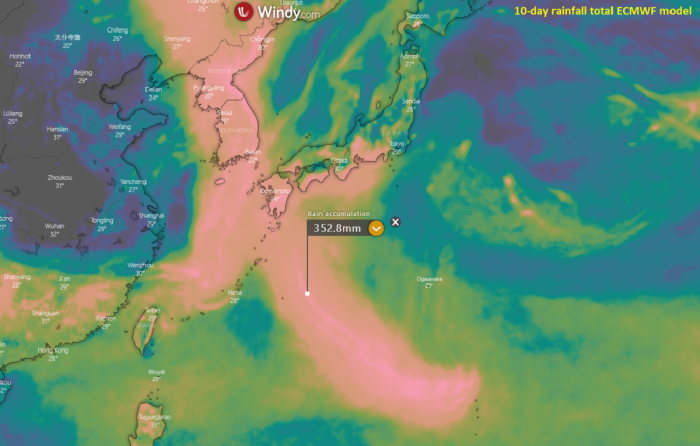