Meteorological summer has come to an end, with the global weather patterns slowly going into autumn mode. This year they will be influenced by the developing La Nina ENSO phase in the tropical Pacific ocean. The latest fall forecast models show this global influence, extending it into the upcoming winter.

The strengthening of La Nina is the key-feature in weather development for at least the next 6 months. We have already discussed this negative ENSO phase impact back in May, with a lot of info on what exactly is the ENSO and how it impacts weather.

But to simplify, ENSO is short for “El Niño Southern Oscillation”. It is a region of ocean in the tropical Pacific, which alternates between warm and cold phases. The tropical trade winds (the easterly winds that circle the Earth near the equator) usually initiate or stop a certain phase, as they mix the ocean surfacve. ENSO has a major impact on the tropical convection patterns and the complex interaction of the ocean-atmosphere system, through which the ENSO influence is distributed globally.

The image below shows all the ENSO regions. The main regions are 3 and 4. They cover the large part of the tropical Pacific. Most calculations and diagnosis is based on a combination of both the 3 and 4 areas, which is why we call the main region “ENSO 3.4” 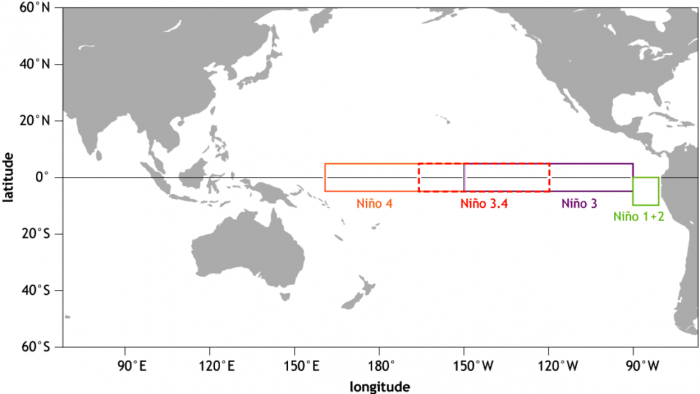 Each ENSO phase has a different influence on the tropical weather and circulation and thus impacting the weather worldwide differently. A specific phase (warm/cold) usually develops around late summer and autumn, and can last until next summer, or even up to two years! 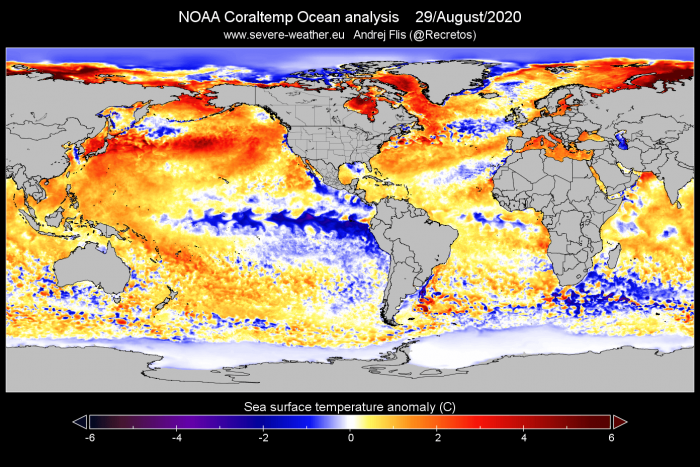 We produced a high-resolution animation, showing the cooling of the tropical Pacific by the easterly winds, and the development of the La Nina. You can exactly see how the easterly winds mixed and cooled the upper ocean levels, from May to September. These winds can amplify or modify the ocean surface currents, creating the upwelling effect, as the cold waters rise to the surface.

The graph by BoM Australia shows the analysis and fall forecast for the ENSO 3.4 region. We can see the main cooling began in Summer and should continue all the way into late Autumn. The La Nina phase will continue all the way through winter 2020/2021, expected to start to weaken into Spring 2021. 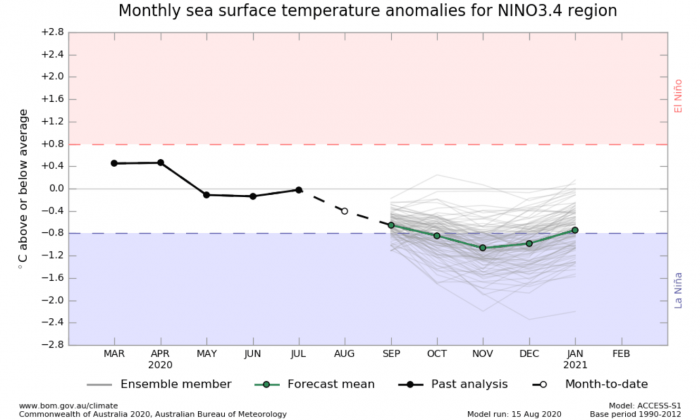 There have already been a few fall/winter seasons with an active La Nina phase. We combined all of 7 them in the past 25 years, to see how the average pattern looked like. This will be important to compare to the model forecasts below in the article.

The two features that stand out are the North Atlantic pattern and the South Pacific pattern. In the North Atlantic, we see a high-pressure system extending from the ocean into eastern Canada and the United States. Above it, we have a lower pressure area extending from Iceland, across Greenland into northern Canada and Alaska. Also notable is the strong high-pressure anomaly around Scandinavia, extending north into the Arctic circle and east into Russia.

In the South Pacific, we can also see a very similar pattern. A low-pressure area off the coast of Antarctica, and a high-pressure system in the subtropics, between Australia and South America. 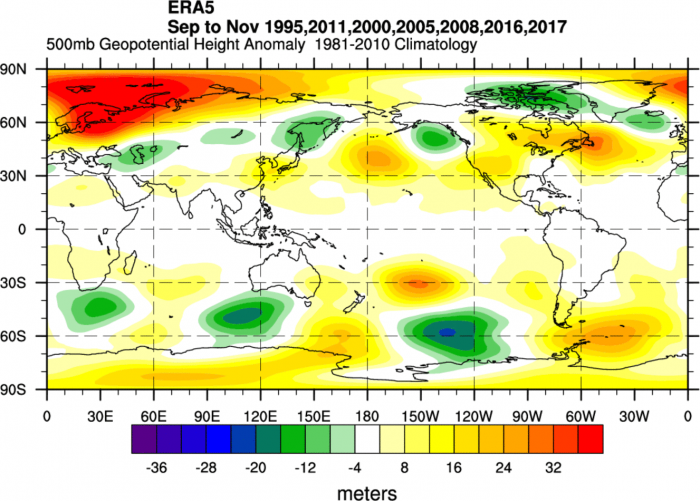 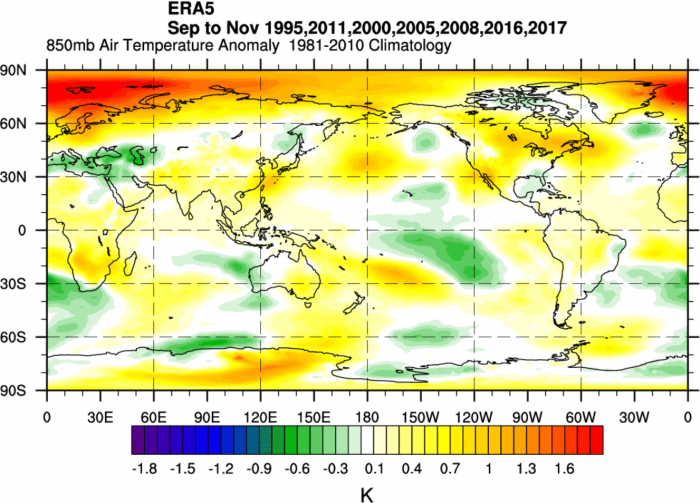 Precipitation patterns are similar to the temperature anomalies. We can see a quite drier than normal situation over most of the United States, while Canada is mostly above-average wet. In Europe, the mainlands are drier than normal, but we have more unsettled weather and more rainfall in northwestern and northern Europe. Also wetter is the Mediterranean region. 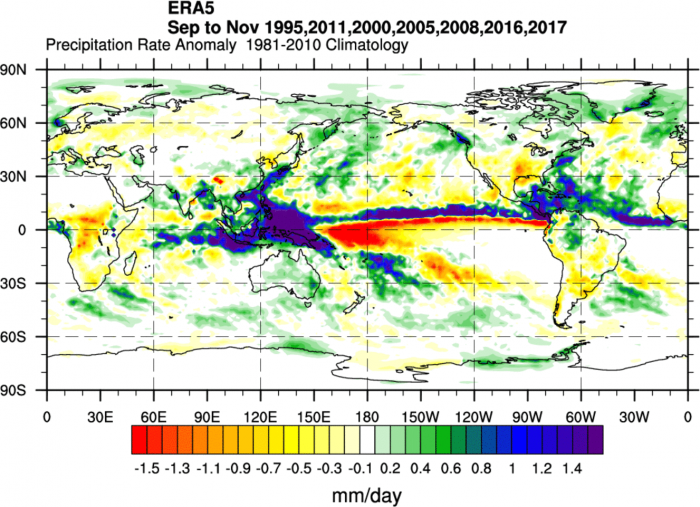 We decided to focus on the 3 main (or most used) seasonal models. The ECMWF and UKMO from Europe, and the CFSv2 from the United States. Graphics are from the Copernicus Climate EU project and the CPC/NCEP.

All these forecasts are an average picture over the course of 3 months (September-October-November) and show the general prevailing weather patterns. Even if the models would be completely accurate, it does not mean that such weather conditions would last for 3 months straight. It only shows/implies how the weather patterns might look 40-60% of the time.

The ECMWF model is most often referred to as the most reliable one. It can really depend on the situation and individual seasons, but generally, the ECMWF model is at the top of the chart as far as reliability goes. But no long-range/seasonal forecast can ever be deemed reliable. We are only looking at trends and how the weather patterns might evolve over the entire continents or the planet.

Right from the start, we can see that the pattern fall forecast has La Nina written all over it. Just like on the historic image above, we have the same pressure patterns in the North Atlantic and the South Pacific. A high-pressure system in the North Atlantic and Eastern Canada, extending over North America. At the same time, we have a lower pressure area from Iceland over Greenland into northern Canada and Alaska. 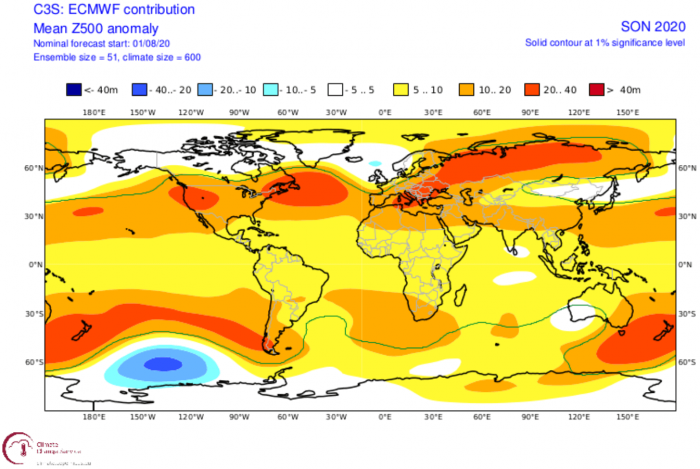 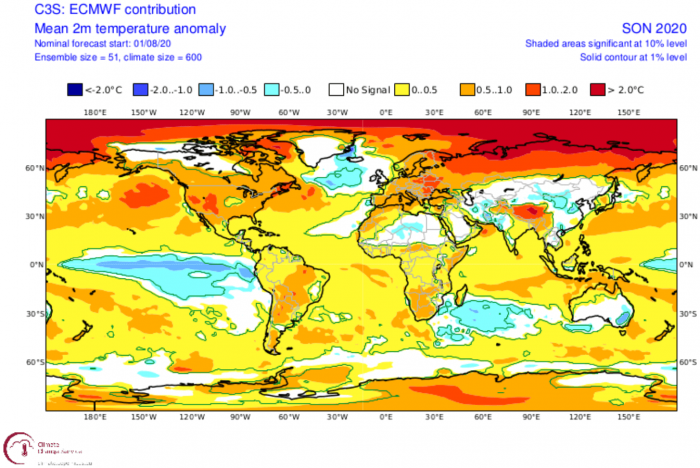 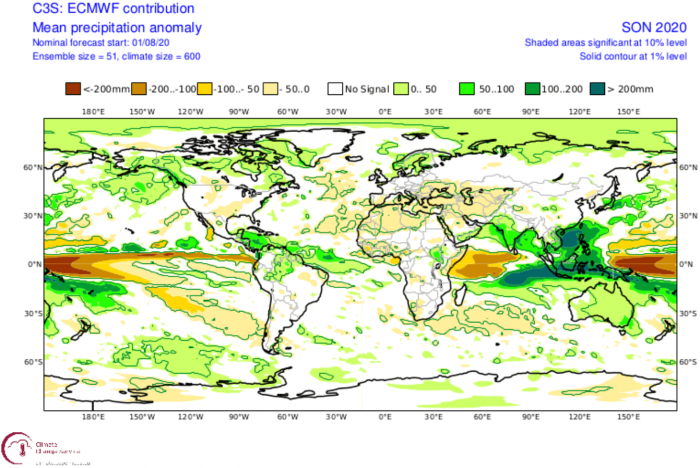 Our second model of choice is the UKMO model, from the United Kingdom Met-Office. This has also been a good performer last winter, so we include it in our standard “suite” of model forecasts. 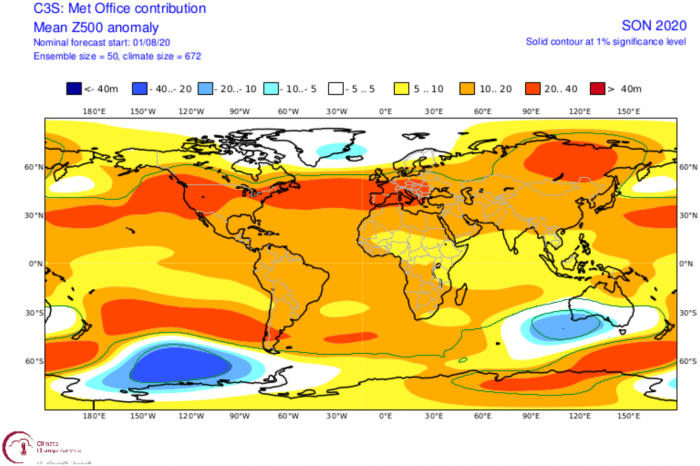 A similar pressure pattern gives a similar temperature result. Most of North America and Europe is warmer than normal. Just like in the ECMWF fall forecast, the UKMO model also has unusually high temperatures over Siberia and the Arctic Circle. 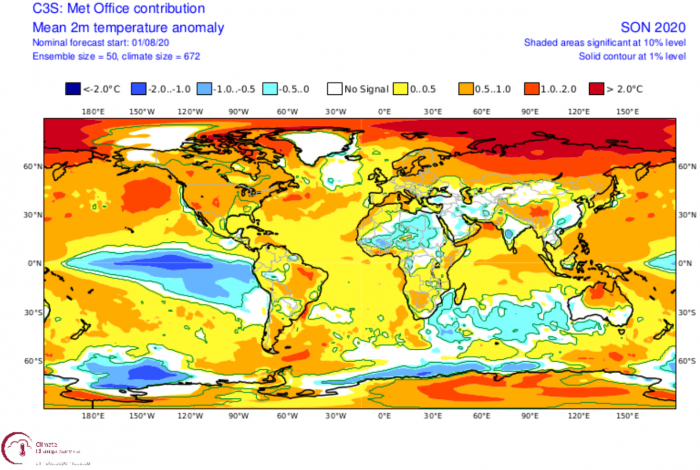 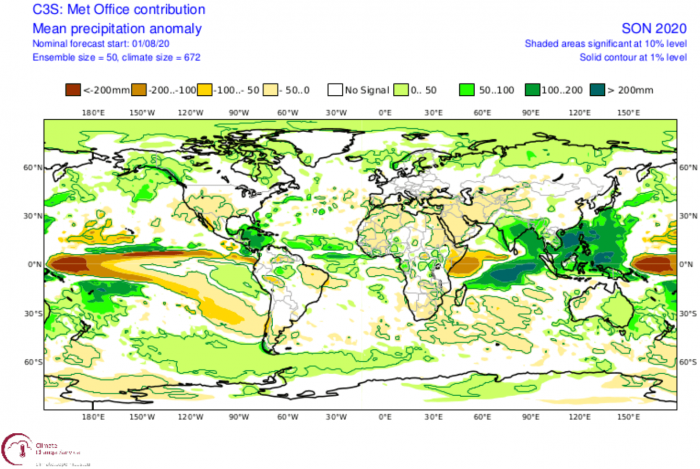 As a counterbalance, we decided to always use the main North American long-range model, the CFS version 2 model from the NOAA/NCEP in the United States.

The pressure pattern is yet again unusually similar to the historical analysis and the other two models. The higher pressure from North America over the Atlantic and over Russia. A low-pressure system in the North Atlantic, over Greenland, and into northern Canada.

The temperature forecast is somewhat different, as there is no large scale above normal temperatures over the eastern United States and Europe. This could mean more dynamic weather to create a normal average, as the La Nina autumns tend to go warmer in these parts, with the exception of southeastern United States.

Normal to drier conditions are forecast for the United States, while Canada and northern Europe experience wetter conditions due to the jet stream positioning. This is completely in line with the other two model forecasts.

Reading images and descriptions can be somewhat confusing. So to summarize, here is what the fall forecast for 2020 is offering:

Europe is expected to have warmer than average temperatures over most of the continent. The exception could be the southern or southeastern regions. This, however, does not mean that there will be no cold fronts and colder days. It just implies that frequent cold fronts and colder air mass will not be prevalent over the continent.
Normal to drier conditions are expected over the mainland. The British Isles and Scandinavia could have more unsettled autumn, as the jet stream positions over these regions, bringing more stormy weather.

North America looks similar to Europe, with the drier and warmer conditions on the southern half over the United States, and wetter than normal conditions over Canada, under the jet stream. The forecasts are concerning for the western half of the United States, where drought conditions are supported, which enables the spread of wildfires.
As the high pressure system builds in the North Pacific during Fall, the chances increase for colder than normal temperatures in the central and southern United States.

Of course, most people want to finally hear some information about Winter 2020/2021. It is still too early to go into winter details. But we can simply extend the historic analysis from La Nina autumns, to see how the upcoming winters looked like.

The pressure pattern and the temperature anomalies were a bit different than last winter. The most obvious sign of a La Nina dominant winter is the high pressure in the North Pacific. This corresponds to the lower pressure over Canada. That promotes the building of a ridge in the Atlantic, creating a lower pressure tendency over Europe. This is a classical “wave-train” pattern. Temperatures also correspond to that, with the most wildcard being Europe. 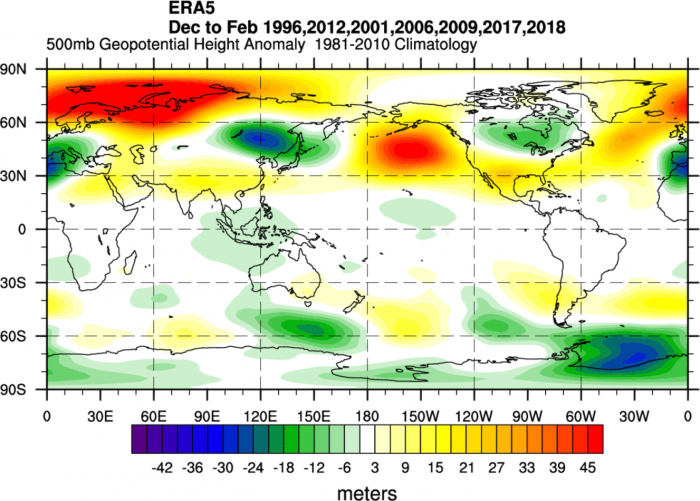 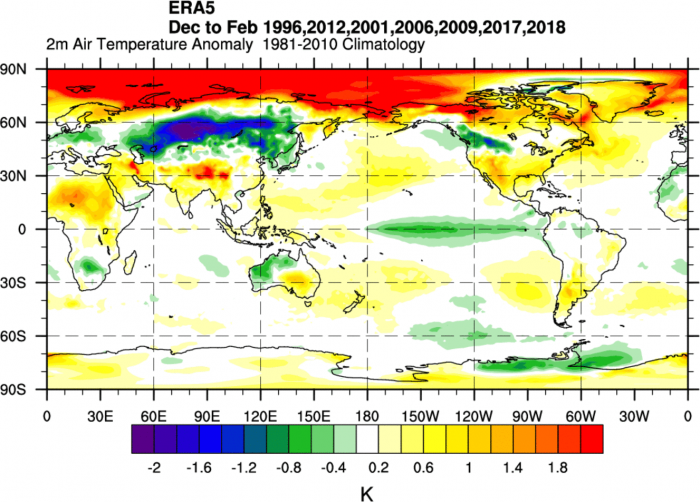 The quick look at the CFSv2 model trends reveals the exact same wave train, with the big temperature difference over Europe. That is simply because of the positioning of the European low-pressure area in this wave train. A simple movement of a few hundred to thousand kilometers north-south can create an entirely different temperature picture. That is why Europe is the biggest wildcard in this wave train pattern. North America is fairly fixed since it is heavily influenced by La Nina and the Pacific pattern. Europe, on the other hand, is more difficult since much more is at play here, including the stratospheric Polar Vortex and its role in the North Atlantic Oscillation (NAO) pattern.

We will release a more in-depth look at the Winter 2020/2021 forecast later in the month, so stay tuned for future updates.