The Typhoon In-Fa has rapidly intensified into a Category 3 tropical cyclone, and peaked on Thursday. It now heads for a destructive impact on the Miyako and Ishigaki Islands, Japan. Then, it continues towards potentially catastrophic flooding impact in China on Sunday, including the city of Shanghai. But there is already a new tropical wave that could significantly impact the weather during the ongoing Olympic Games 2021 in Tokyo on Monday.

*** Just in: UPDATE: Nearly 200 million people are under the impact of the catastrophic floods as Typhoon In-fa heads towards Shanghai, China. Tropical Storm Nepartak turns towards Japan

Typhoon In-fa was first known as a Tropical Storm Fabian, designated by the meteorological office in the Philippines, then In-Fa was used by JTWC. Gradually gaining strength while moving west-northwest towards the Okinawa Islands, Japan first, exploding into a Category 3 typhoon and peaked on Thursday. 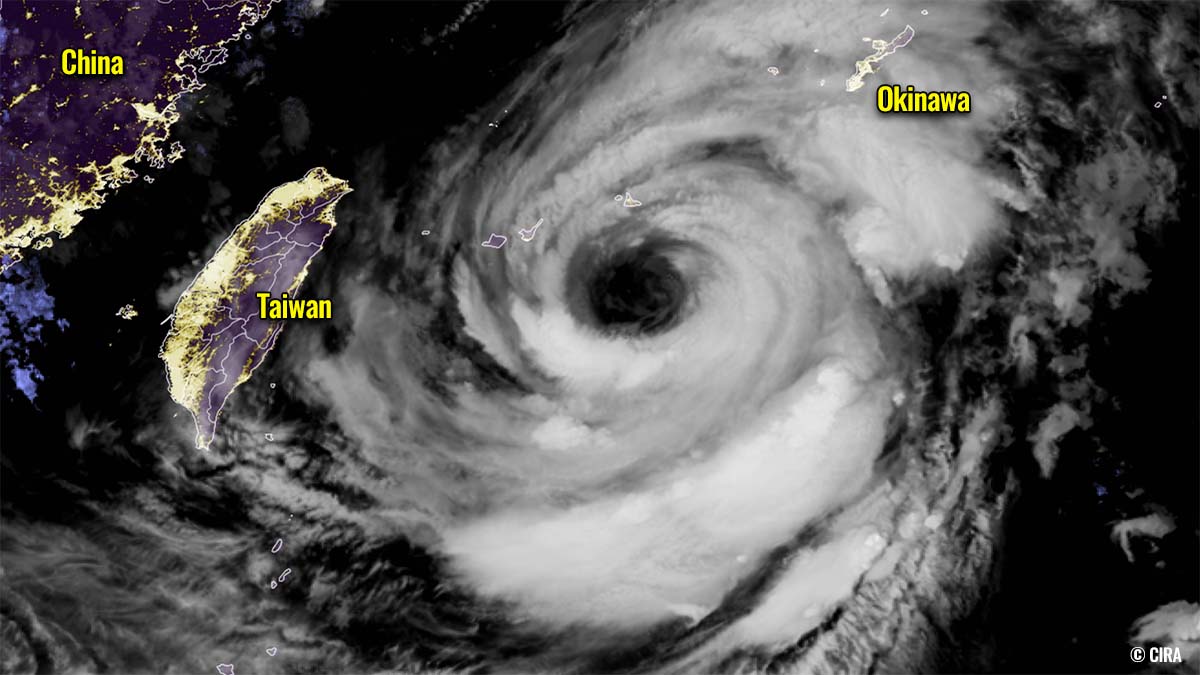 Typhoon In-Fa is the 7th tropical cyclone of the 2021 Pacific typhoon season and the 3rd typhoon of the Western Pacific season, after Category 5 Surigae (mid-April) and Category 1 typhoon Champi (late June). The system has formed within pretty favorable weather conditions, under the MJO wave over the Pacific Basin lately and extremely warm seas.

In-Fa now has a very large eye and will first graze across the Japanese islands Miyako and Ishigaki this Friday. Emergency warnings for exceptional heavy rain, storm surge, and landslide warnings are in effect, issued by Japan meteorological office.

After passing over Miyako and Ishigaki Islands, typhoon In-Fa then turns towards the potentially catastrophic flooding impact to China. The country’s biggest city, Shanghai (population of 26 million) could be in its path as well, impacted by both damaging winds and significant rainfall with floods on Sunday.

Here is a radar animation of both the Japan and Taiwan radar networks, indicating an impressive structure of the typhoon In-Fa eyewall while slowly approaching the Miyako and Ishigaki Islands from Thursday to Friday morning.

Today, Friday, July 23rd, the Olympic Games 2021 starts in Tokyo, Japan. While Typhoon In-Fa doesn’t have a direct impact on the weather in that part of Japan yet, there is a very large tropical wave to the south of the country right now. Becoming a concerning threat that it churns another typhoon that may impact Japan’s main islands Honshu, including the capital Tokyo on Monday.

The sea surface across the western Pacific Ocean is extremely warm, even hot temperatures are being observed in some places this summer. In particular, a large part of the Philippine Sea and the South China Sea has sea surface water temperatures of 30 to nearly 32 °C (86-88 °F).

These hot waters were supportive of healthy moist fuel for the deep convective storms that lead to the rapid strengthening of typhoon In-Fa on Tuesday.

When we have the oceanic conditions this warm, sea waters become strongly supportive of an explosive intensification for any tropical cyclone that travels onto them. The convective processes in thunderstorms significantly profit from the very warm seas beneath and help to strengthen the tropical storm. 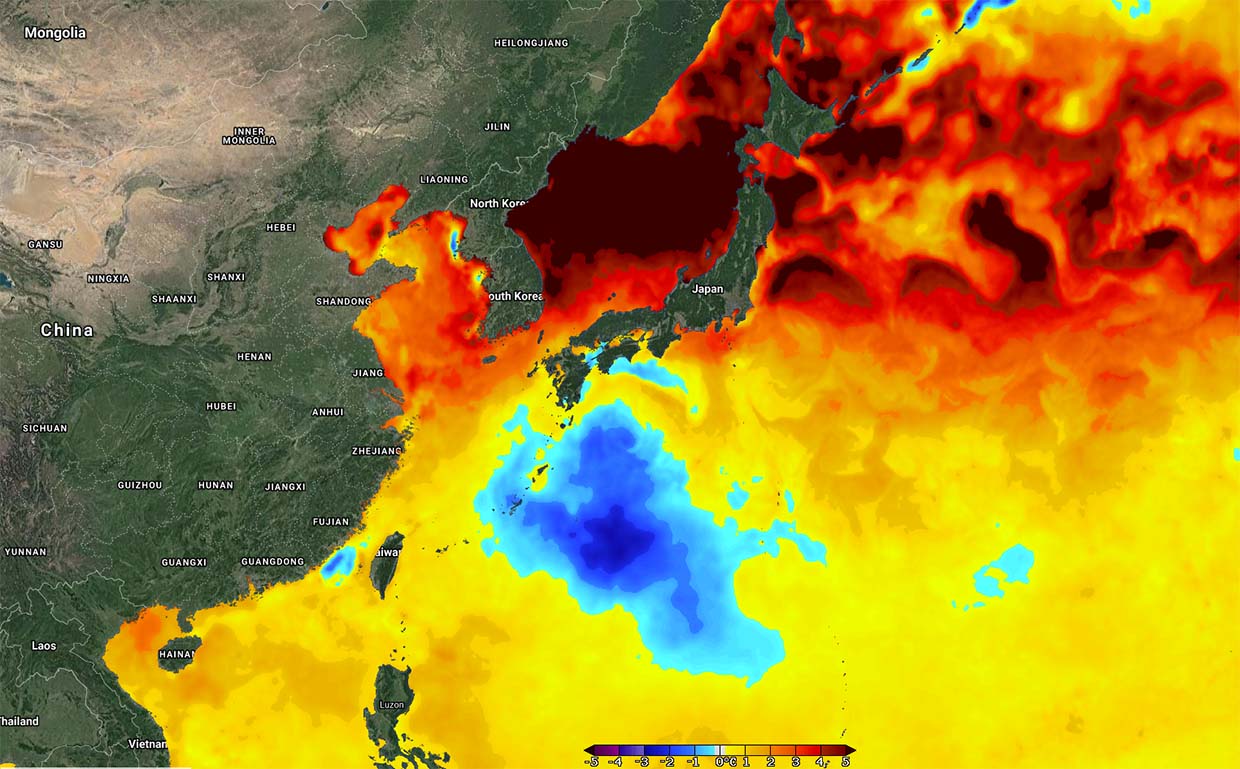 The Typhoon In-Fa has moved into these conditions on Tuesday and its intensity has ramped up significantly and brought it to a Category 3 strength by Wednesday.

The sea surface waters of the Philippine Sea are much warmer than normal, about 1-2 °C above. Being also much warmer further west across the South China Sea and towards the Indian Sea. The highest sea surface temperature anomalies are spread around Japan and across the Northwest Pacific.

And also, while the Olympic Games 2021 are ongoing in Japan, the seas around the country are very warm. Around 3-5 °C above normal are observed in most of the Sea of Japan. While basically most of the western Pacific remains with well above-average sea waters.

Since very warm seas are needed to support vigorous thunderstorms with tropical cyclone evolution, they also coincided with another tropical ingredient this week, a Madden-Julian Oscillation (MJO). MJO is a wave that travels the Earth from west to east around the equator and has a significant effect on tropical activity around the world.

Madden-Julian Oscillation is known as the largest and the most dominant source of short-term variability in the tropical region. It is an eastward-moving wave of showers and thunderstorms that circles the entire planet along the equator in about 30 to 60 days.

A significant increase in the MJO intensity has recently been observed over the Western Pacific, leading to the formation of Typhoon In-Fa.

The MJO has two parts, one side has the wet phase and the other side has a dry phase. This means that there is enhanced convection with a lot of rainfall on one side and reduced activity (more stable) and drier weather on the other side. This horizontal movement (west to east) of the air masses is referred to as the Velocity Potential (VP) in the tropics.

The chart below, provided by Michael J. Ventrice, Ph.D. is showing the MJO with filtered *VP200 anomalies for the current state and the week ahead forecast. The blue colors mean more favorable conditions for tropical cyclone development, while the red colors are representative of a less favorable state for tropical cyclogenesis.

We can easily see how deep and intense the wet part of the MJO wave is over the Western Pacific, this is a very significant signal of the upward motion over the Western Pacific right now. That is why Typhoon In-Fa has all the support it needs for its maintaining and strengthening. Both the hot sea waters and upper-level support are there.

And the remaining favorable part of the MJO with very warm seas around Japan will soon lead to another dangerous tropical disturbance that could turn towards Tokyo where the ongoing Olympic Games 2021 are happening right now.

On the opposite side of the wave, strongly positive anomalies (warmer colors) can be observed over the Atlantic. This is the main reason why the tropical activity is completely shut down after a record-breaking start of the Atlantic Hurricane Season this year.

The chart above also hints that these conditions will not improve much at least for another week, but then changes are likely coming up towards early August.

Note: VP200 above means a Velocity Potential (VP). This is an indicator of the large-scale divergent flow in the upper levels over the tropical region. The negative VP anomalies (shaded in blue tint in the diagram) are closely related to the divergent outflow from enhanced convective regions.

The animated infrared satellite imagery and scans from the Japanese radar network indicate a very large 50-60 miles round eye with extensive spiral banding. While the eye was much smaller on Wednesday, an eyewall replacement cycle (EWRC) has been completed on early Thursday and the inner eyewall was replaced with the outer ring we are seeing as a large eye now.

By Friday (today), typhoon In-Fa will pass south of Okinawa, across the Miyako and Ishigaki Islands. The eye of the cyclone is so large that both islands will see a significant impact with heavy rains, flooding, and severe damaging winds.

The maximum wind gusts could reach up to 200 km/h in some areas affected by the eyewall storms. 100-200+ mm is possible until Saturday, leading to damaging floods and landslides.

Overall, Typhoon In-Fa is slowly weakening but remains a very powerful tropical cyclone. The initial intensity is 85 knots based on the satellite estimates by Advanced Dvorak Technique (ADT). While the upper-level analysis indicates that still, favorable conditions are in place, with low vertical wind shear and moderate radial outflow ventilation aloft. 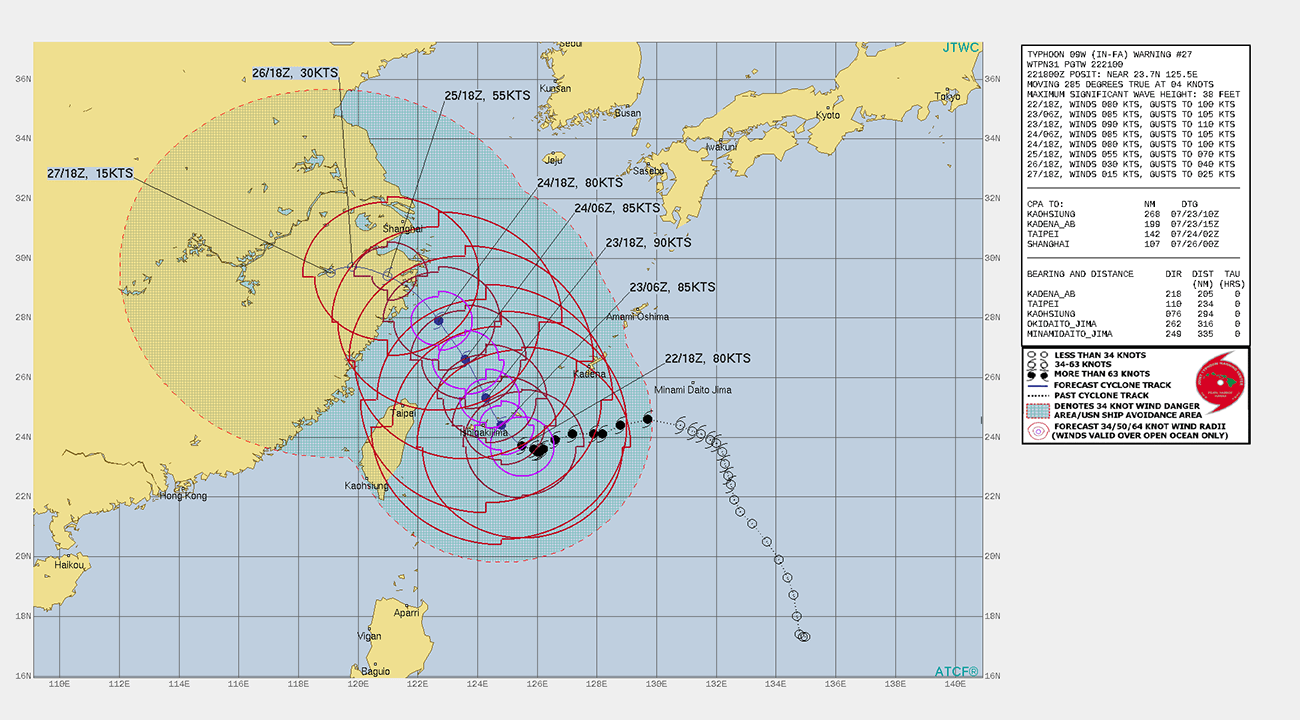 While the typhoon In-Fa turns northwest and missed Taiwan, it continues towards China where a potentially very significant and life-threatening impact could occur on Sunday. A swath of exceptional amounts of rain seems to develop when In-Fa will be on its approach to the China coast on Saturday and Sunday.

Some places could see even more than 1000 mm of rain. Deadly flooding threat is expected where these rainfall sums will occur! The city of Shanghai could also be under extreme rainfall threat. 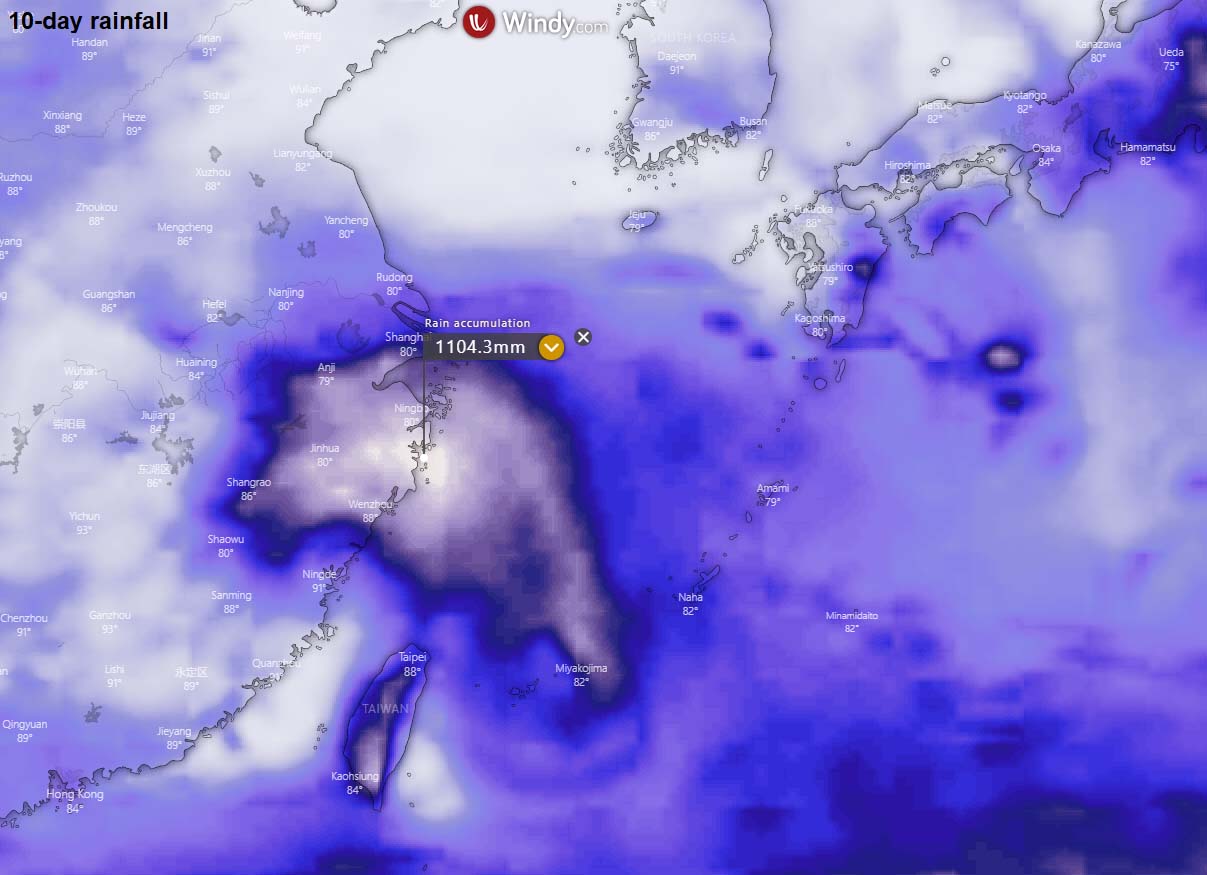 But Taiwan will not be spared either. The main concern on the island is extreme rainfall and significant flooding. Rain is, however, needed for a large part of Taiwan which is experiencing its worst drought in some 50 years.

Some high-resolution weather models hint at about 400-800 mm of rain possible until the end of the upcoming weekend. Such an amount of rain could lead to catastrophic flash flooding and mudslides in the mountainous terrain of Taiwan.

The exact point of landfall in China is still uncertain at this moment, but the typhoon should continue northwest after it crosses Miyako and Ishigaki Islands this Friday. The attached chart below indicates the swath of maximum wind gusts along the potential track of Typhoon In-Fa, with 160-200 km/h coming as close as the China coast to the south of Shangai on Sunday.

A combination of severe, potentially destructive winds, very heavy and excessive rainfall could be catastrophic for the areas where landfall will occur. Huge amounts of rain, storm surge, and winds could lead to life-threatening and deadly flooding in densely populated areas.

TROPICAL IMPACT COULD DEVELOP FOR THE OLYMPIC GAMES 2021 ON MONDAY

Like the global pandemic hasn’t done enough damage in many aspects of our economic and public environment, it is also impacting this year’s Olympic Games in Tokyo, Japan. Sadly, the activities are done without public attendance in 2021. And to make it even worse, there are now chances increasing for the tropical threat in the coming days.

To the south of Japan, a large area of tropical activity is seen on the satellite imagery. If we compare it with the ongoing Typhoon In-Fa further west (or with the size of Japan), it is a great concern. Weather model guidance has recently risen chances that this wave churns another tropical cyclone or even a typhoon, moving north towards Japan’s main island. 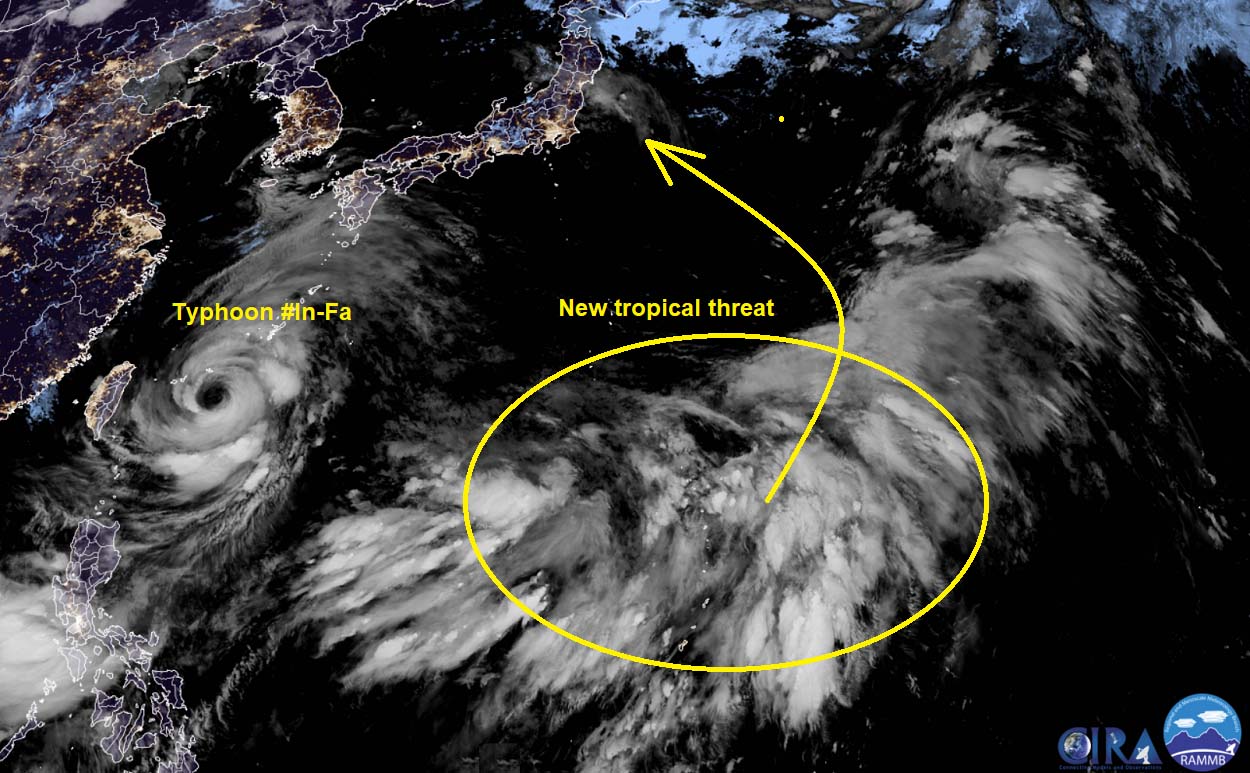 As the activity within this tropical wave hasn’t organized into a tropical disturbance yet, the potential track remains uncertain. Although the general model consensus trend suggests that the swath of rain and winds would turn towards the capital Tokyo where Olympic Games are underway.

The attached rainfall chart below indicates the forecast amount of rain over the next 10 days. Showing a huge swath of rain across the Northern Mariana Islands, with another focus of significant rainfall amount over central Japan and Tokyo.

About 200-300 mm of rainfall could be possible around the area of the Olympic Games until the end of July. But these amounts could vary a lot since a lot of details are yet to be defined when the tropical disturbance finally forms tonight or on Saturday.

The Peak wind gusts map below also hints at one of the scenarios of the new tropical cyclone coming up from this wave towards Japan on Monday. Turning west with the steering flow, thanks to the upper High farther north. Definitely not a good option for the Olympic Games area if this verifies. 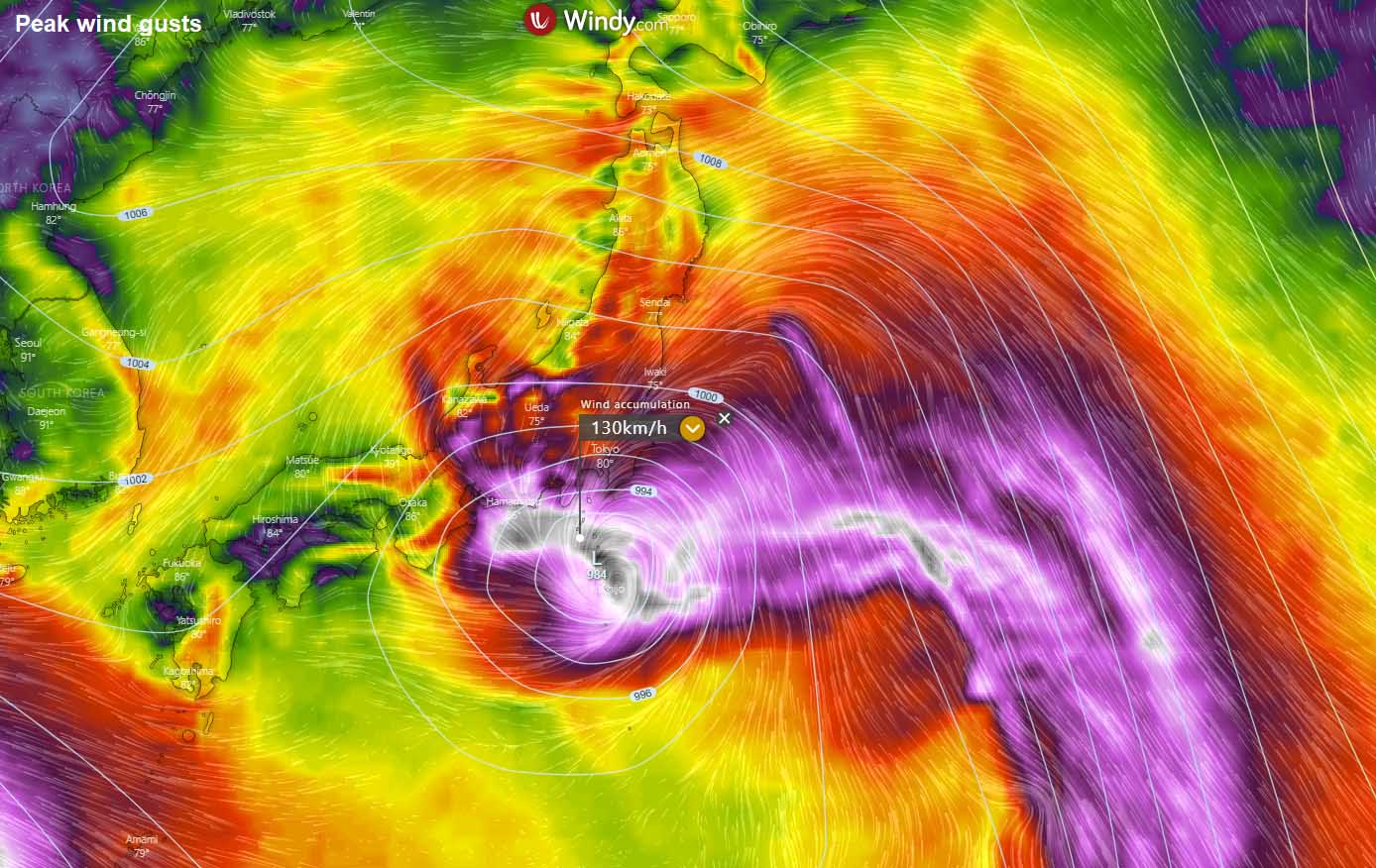 Winds could be severe and bring damage to some parts of Honshu, while 200-300 mm of rain could lead to flooding in places.

We are closely monitoring the evolution of this new wave that may impact the weather forecast for the Olympic Games 2021 in the coming days. Stay tuned!