After a quiet period of tropical cyclone activity over the Western Pacific, the general conditions are now strongly supportive of tropical development. Under a deep MJO wave, a Severe Tropical Storm In-Fa (known as Fabian in the Philippines) is strengthening while moving towards Japan’s Ryukyu Islands. It is soon expected to become an intense typhoon and severely impact Miyako and Ishigaki Islands, including Taiwan late this week.

UPDATE: Shanghai, China in big trouble by monster typhoon In-fa on Sunday, while the Olympic Games in Japan are under tropical threat on Monday

Storm In-Fa is officially the 7th tropical storm of the 2021 Pacific typhoon season and will be the third typhoon after Category 5 Surigae (mid-April) and Category 1 typhoon Champi (lat June).

Thanks to the pretty favorable conditions under the MJO over the Pacific Basin lately, it has helped the storm to intensify since its birth in the Philippine Sea last week. The Japan Meteorological Agency (JMA) has already issued wave and sea warnings on the southern portion of the Ryukyu ahead of the incoming tropical storm. 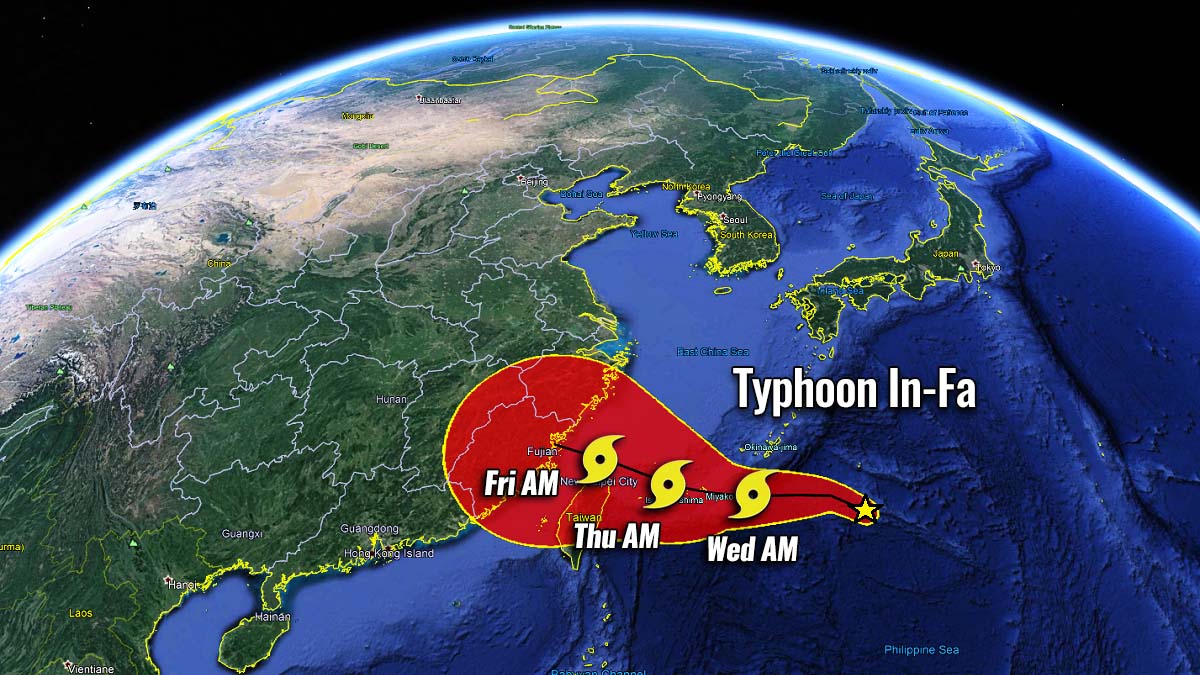 Based on the recent satellite and objective analysis, Tropical Storm In-Fa will begin intensifying at a faster rate as it continues westward over the next two days. It is very likely it will soon be upgraded into typhoon strength. Microwave satellite scans are hinting that the system could build up an inner core later this Tuesday.

Its initial intensity as of Tuesday morning (local time) is set at 55 knots of the maximum sustained winds and around 978 mbar minimum central pressure. The system continues gradually strengthening while its center is still very slowly moving towards the west-northwest with a forward speed of only 3-5 knots.

The last intense tropical cyclone in the western Pacific Basin was a record-breaking Category 5 Typhoon Surigae in April this year. It peaks at an exceptional wind intensity of 165 knots and a minimum central pressure of 888 mbar.

The sea surface temperatures across the western Pacific Ocean are extremely warm, even hot in places this summer. A large portion of the Philippine Sea and the South China Sea is very hot with sea surface water temperatures 30 to nearly 32 °C (86-88 °F) in some spots. This is *extremely* supportive of healthy fuel for the deep convective storms.

When the oceanic conditions are this warm, they become strongly supportive of an explosive intensification for any tropical cyclone that its convective storms would profit from these hot seas beneath. This is also a sign that when Typhoon In-Fa moves into these conditions farther west, its intensity could ramp up quite significantly. The same that actually happened with the Super Typhoon Surigae we have discussed earlier.

The sea surface waters of the Philippine Sea are much warmer than the long-term average, about 1 to nearly 2 °C above normal. Strongly anomalous sea temperature often leads to the explosive development of deep storms, that develop well-organized tropical cyclones. The Sea of Japan is also very warm, around 3-5 °C above normal in most of the area.

But as we can see from the attached sea temperature anomaly chart above, most of the western Pacific remains with well above-average sea waters. Sea waters are also warm further west across the South China Sea and towards the Indian Sea. The highest sea surface temperature anomalies are observed around Japan and across the Northwest Pacific.

These very warm seas again coincide with another tropical factor that has a huge effect on tropical cyclone activity worldwide. It is known as the MJO – The Madden-Julian Oscillation.

WHAT IS THE MJO WAVE?

MJO is known as the largest and the most dominant source of short-term variability in the tropical region. It is an eastward-moving wave of thunderstorms that circles the entire planet on the equator in about 30 to 60 days. And the intensity of the MJO wave has recently significantly increased over the Western Pacific and lead to the formation of Typhoon In-Fa. 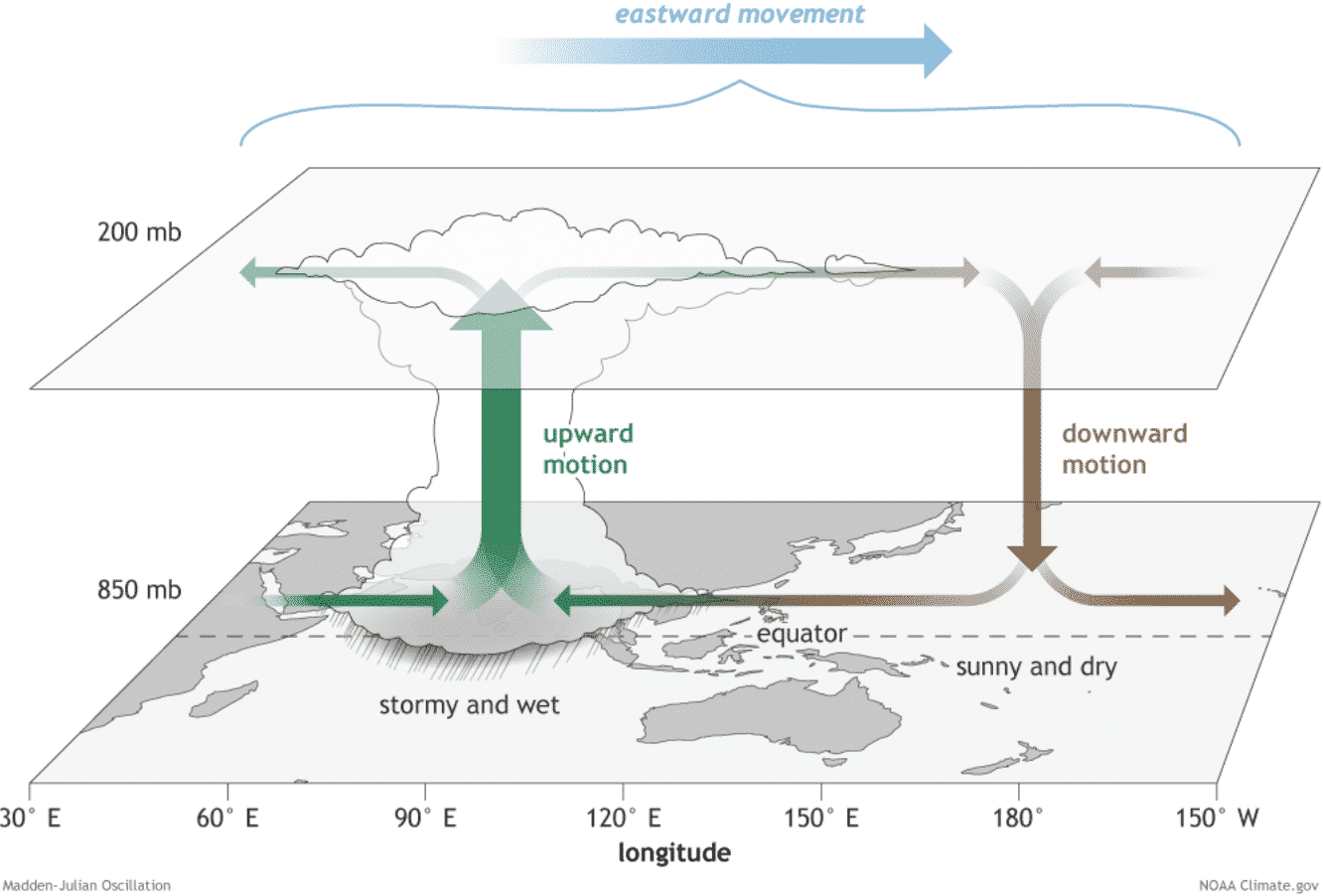 The chart below, provided by Michael J. Ventrice, Ph.D. represents the MJO with filtered *VP200 anomalies for the current state and one week ahead forecast. The blue colors (cold) mean more favorable conditions for tropical cyclone development, while the red colors (warm) are representative of a less favorable state for tropical cyclogenesis. 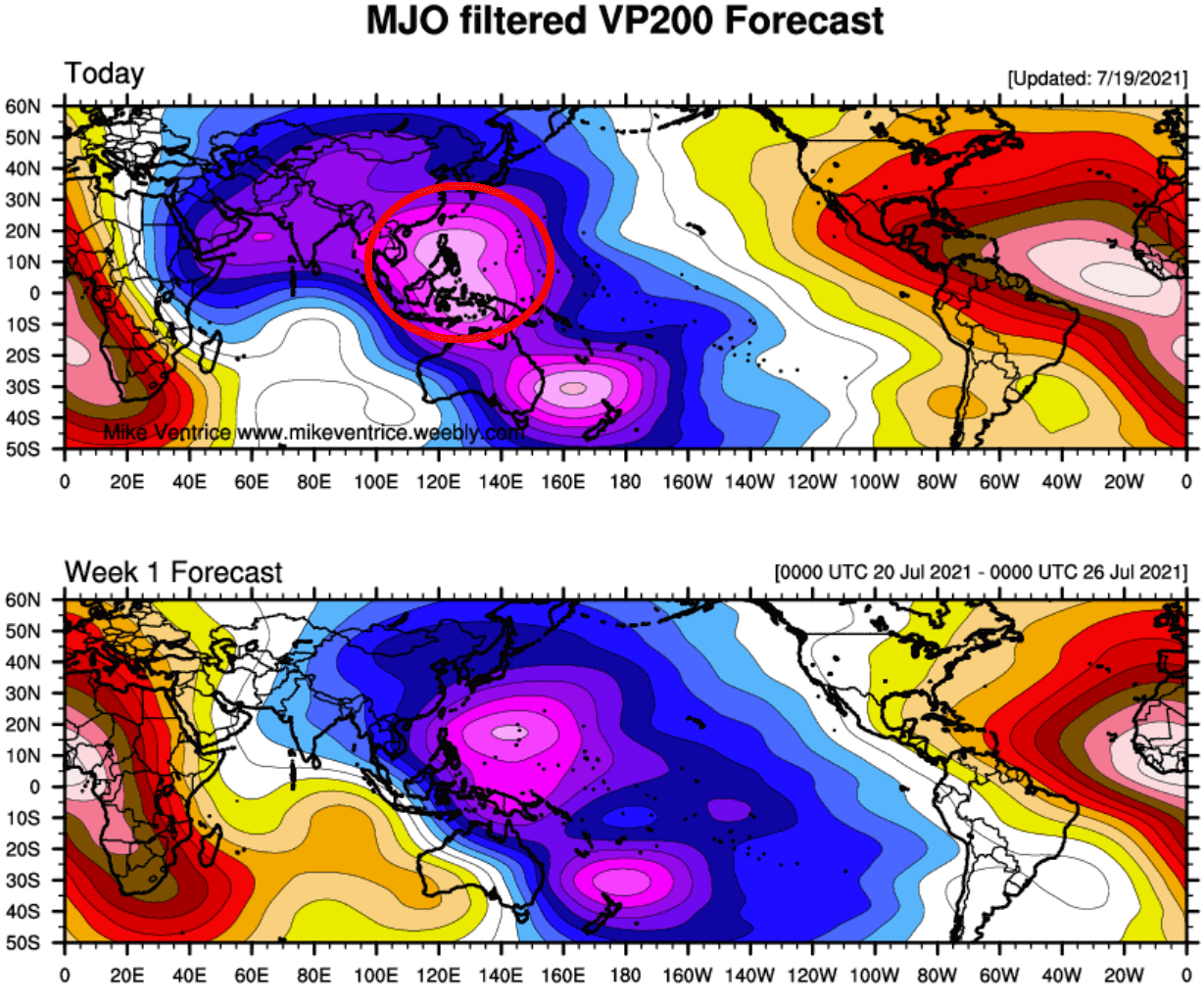 While on the contrary side, strongly positive anomalies (warmer colors) are seen over the Atlantic – that is why the tropical activity in this part completely shut down over the last two weeks. And the chart also tells us that conditions will not improve at least for another week, possibly two.

And while sea surface temperature and the MJO would be good enough, another factor for the development and especially the intensification rate of the tropical cyclones is the Ocean Heat Content (OHC). It takes into account the depth of the sea, and how warm the water layers are deeper below the sea surface. Basically, it tells us how much energy the ocean could provide upwards into convective systems.

The recent OHC chart for the Western Pacific hints at a large pool of very high available oceanic heat energy to the west of the current cyclone position. While the upcoming 24-36 hours are moderately supportive of further strengthening, once the system arrives closer to the Ryukyu Islands on Wednesday, the explosive development of typhoons might occur. 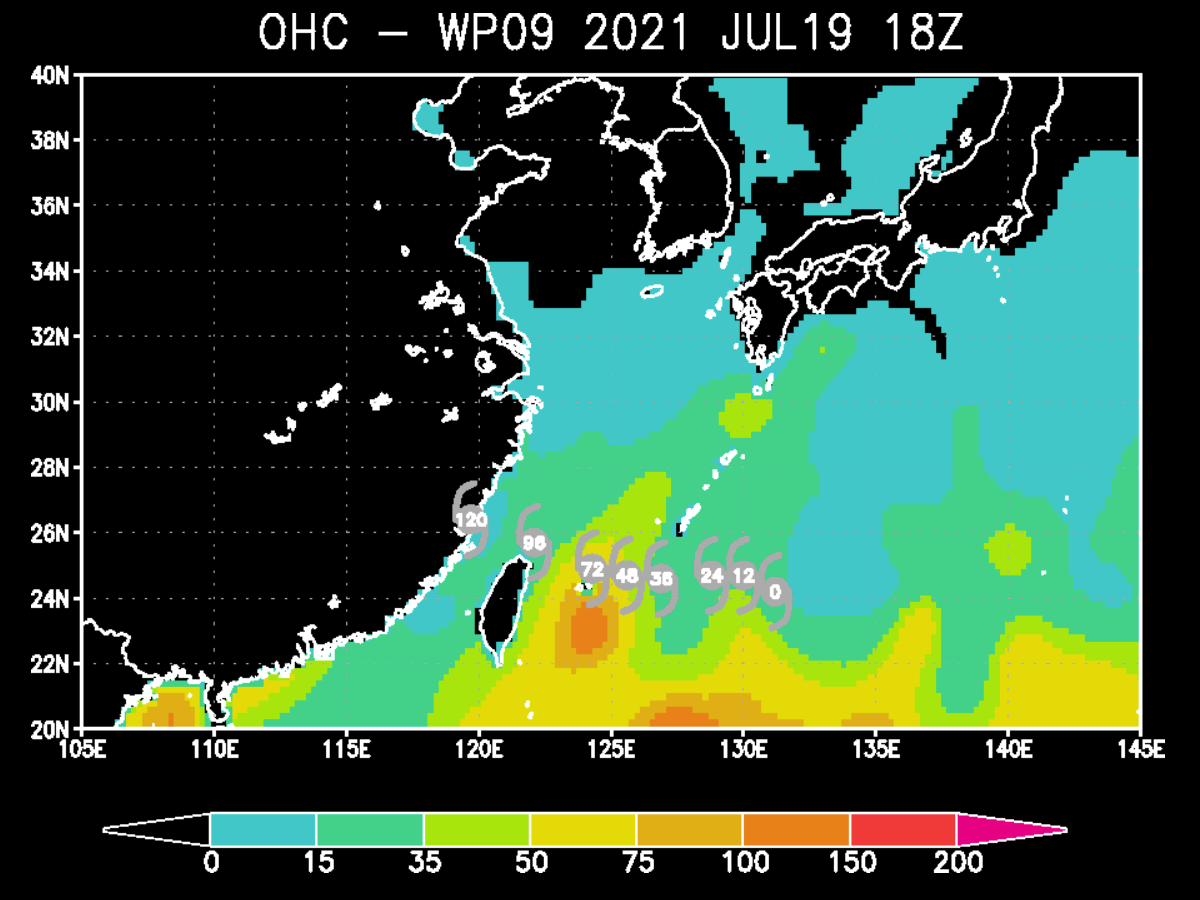 OHC values above 100 are often indicative of the high potential for rapid intensification for the tropical system when it moves into such conditions. The warmer layer of deep oceanic waters is spread to the east of Taiwan, while typhoon In-Fa will travel on its northern edge.

The deep and warm sea waters typically provide a very favorable environment and tropical systems are fueled by these warm layers, as deep convective storms draw energy from hot water beneath. Long story short; this means that the thicker the warm layers are, the more fuel/energy is there available to feed the (tropical) convective storms.

TYPHOON IN-FA WILL GRAZE TOWARDS RYUKJU ISLANDS AND TAIWAN

A Tropical Storm In-Fa has maintained good organization on Monday and its core remains strong. Its slow movement is churning up deeper cooler waters and also limiting intensification for now. But the system remains and should emerge into better conditions further west, with low wind shear and very high sea surface temperatures of 30-31 °C present along its future track.

This Tuesday morning, the visible satellite imagery indicates that In-Fa’s core is even better organized, while the drier air to the west and south is gradually closing, so the system should continue gaining additional strength as it tracks westward towards Miyako Islands in two days.

The animated multispectral satellite animation depicts that substantial dry air entrainment is still wrapping into the western semicircle of the deepening low, which is somehow limiting its more rapid strengthening. But there is also a lot of convective activity southeast of the system’s core that may help to push deeper moisture towards the center of the low this Tuesday. 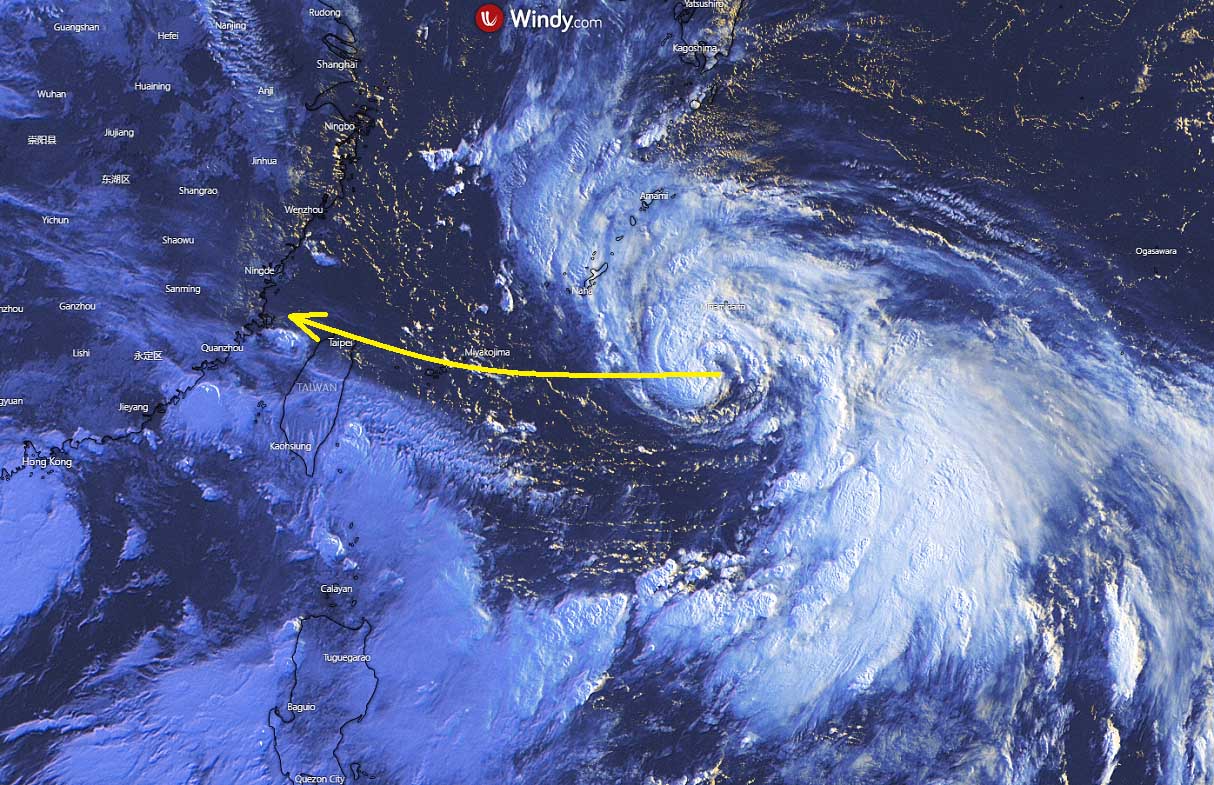 According to the weather model and official forecasts by JMA and JTWC, Typhoon In-Fa could reach the area between Japan and Taiwan by Wednesday morning, July 21st, likely as a typhoon of a Category 1 or even two.

Typhoon In-Fa will likely be closest to north Taiwan through Wednesday night into Thursday, July 22nd. 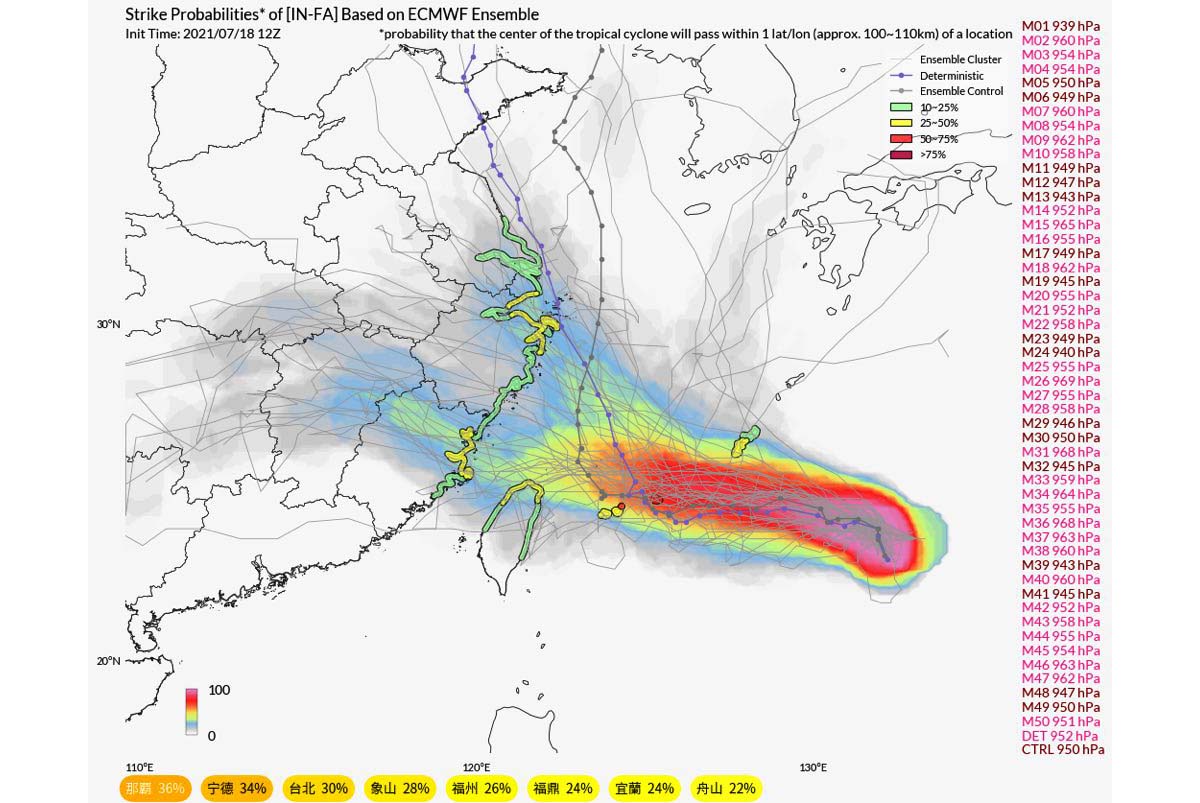 But the time distance is still 3 days in advance, so how close and how intense typhoon In-Fa might be is still rather uncertain for now. But the impact on northern Taiwan could become a serious threat, including the capital Taipeh City.

A tremendous amount of rainfall is forecast along the typhoon In-Fa track, affecting southern Ryukyu islands and at least the northern half of Taiwan. 400 to nearly 800 mm of rainfall will be possible over the next 5 days. Such an extreme amount of rain in this relatively short period will lead to catastrophic flooding in some areas! 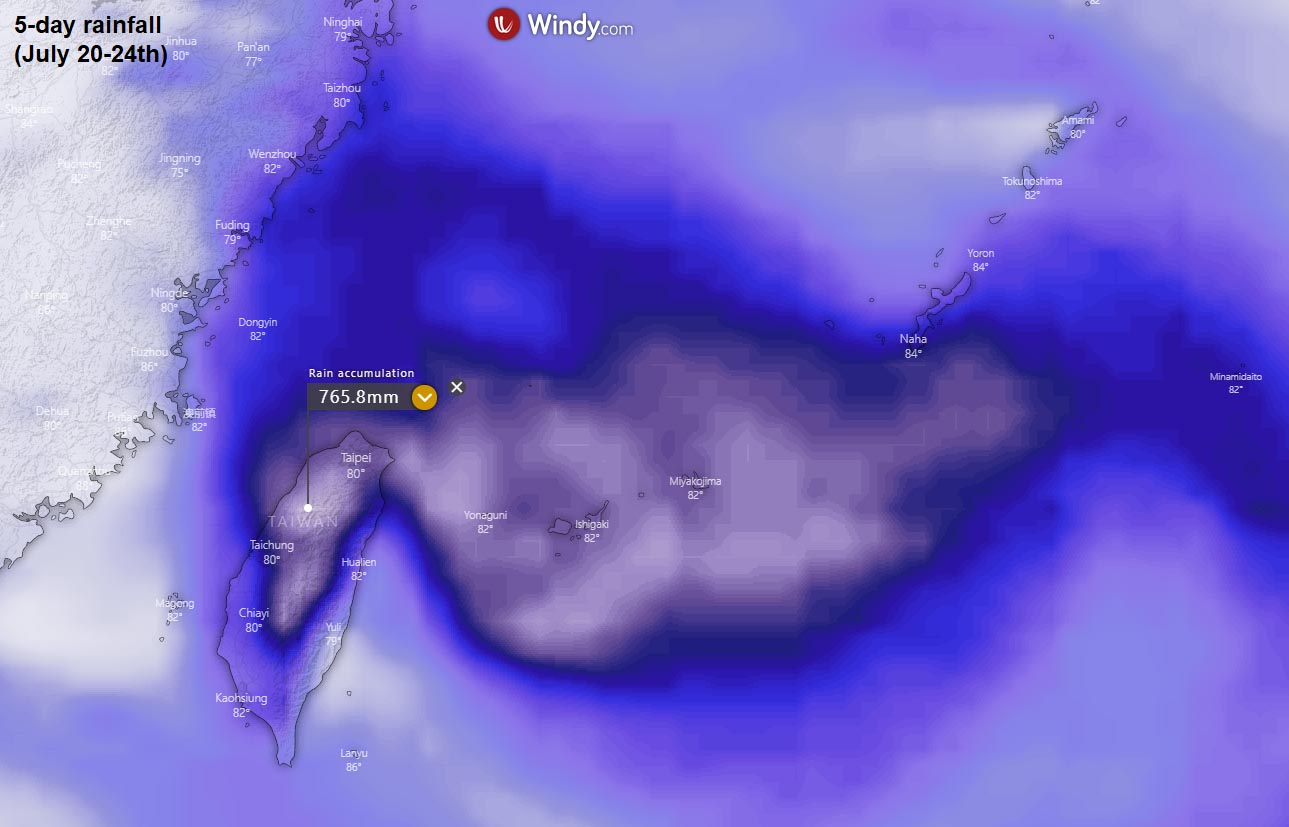 Depending on the exact intensity and system organization over the next two days, Typhoon In-Fa could veer well off north of Taiwan and miss the country, passing through Okinawa and failing to disrupt Taiwan’s weather to any significant degree. How intense the winds will be while crossing the southern Ryukyu Islands strongly depends on the interaction of In-Fa with the healthy sea waters around the islands.

If more explosive strengthening occurs, In-Fa might become a Category 2 (or even 3) typhoon when it crosses the area, and winds, together with major storm surges, would be destructive for the Miyako and Ishigaki Islands. 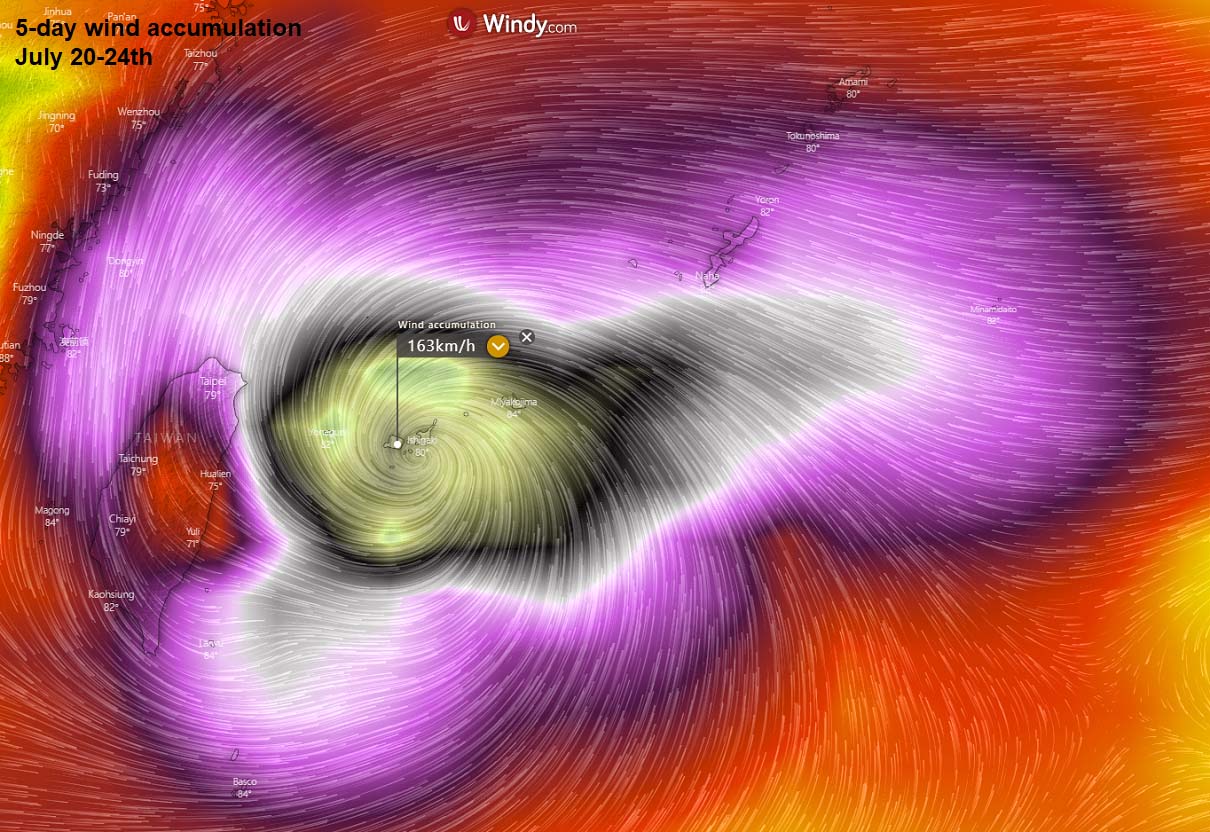 In-Fa will then continue moving in a generally westerly direction toward China late this week. If it remains at a typhoon strength until it makes landfall in China it would become this year’s first typhoon there. Attached below is the best track with conus area of the potential spread of the track up to the weekend. 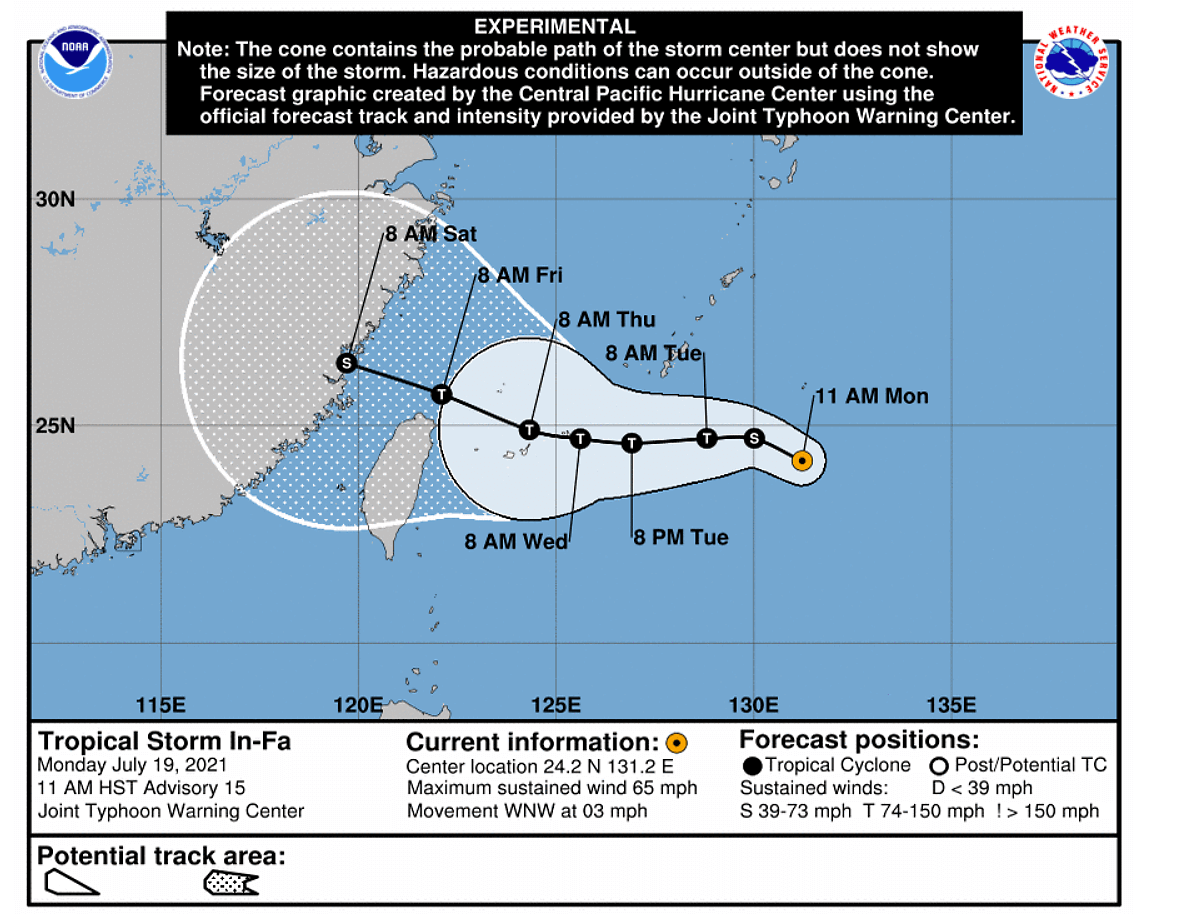