The extremely active Atlantic hurricane season continues. A Tropical Storm Paulette has formed in the central Atlantic today while two more systems are likely to form this week – a Tropical storms Rene and Sally. Then, only 3 storm names are left for the 2020 season.

Now, three tropical waves are traveling across the Eastern Atlantic and western Africa. The westernmost wave has already organized into a Tropical Storm Paulette.

The second wave – a former tropical depression Eighteen, has been upgraded to a Tropical Storm Rene today.

Another wave is located over western Africa and is expected to emerge into the tropical Atlantic soon. It is likely to become a tropical depression/storm as well. The next reserved storm name is Sally. 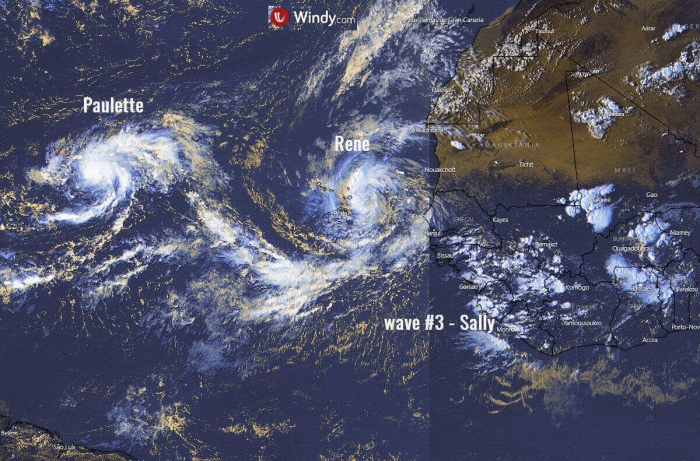 Paulette is the earliest 16th named storm of any Atlantic season by 10 days. The previous record was Philippe, which formed on Sept 17th, 2005.

Both infrared and visible satellite channels are indicating that Paulette is already a quite well-organized storm. An obvious cyclonic shape of the tropical wave is seen. 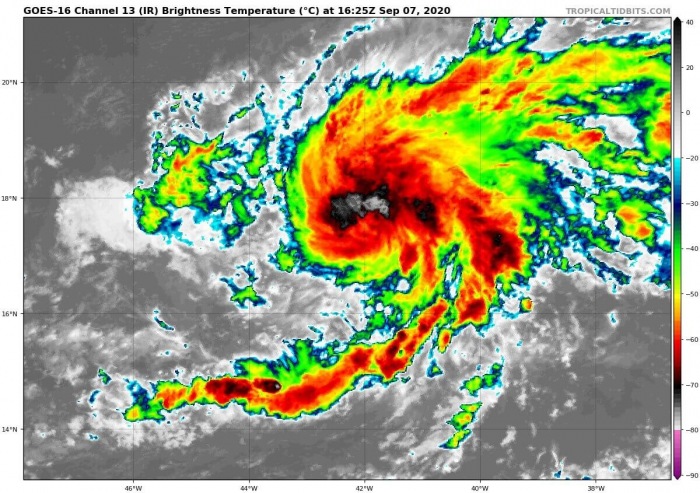 Being located in the favorable warm central Atlantic, further development and maintaining storms is expected. The convection is increasing in both coverage and organization today. 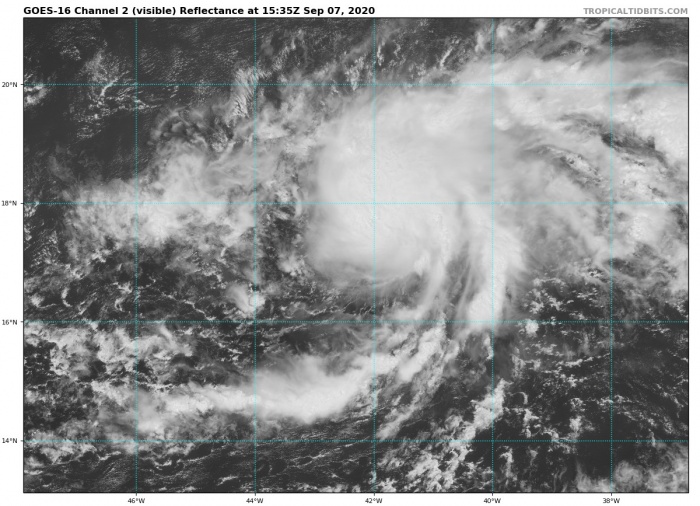 The National Hurricane Center (NHC) forecast is suggesting Paulette will be moving generally northwest over the next couple of days. For now, upgrade into hurricane strength is not expected. 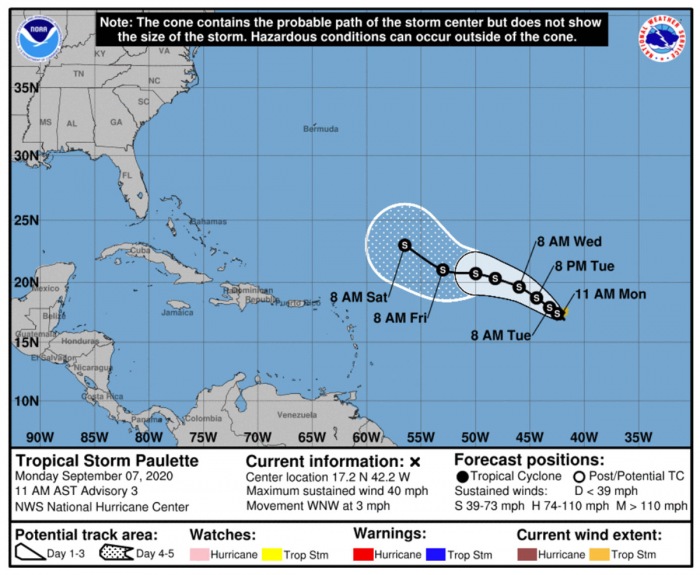 The intensity model forecast suggests Paulette will remain at a tropical-storm-force in the coming days. The steering flow should turn it away from any land areas. 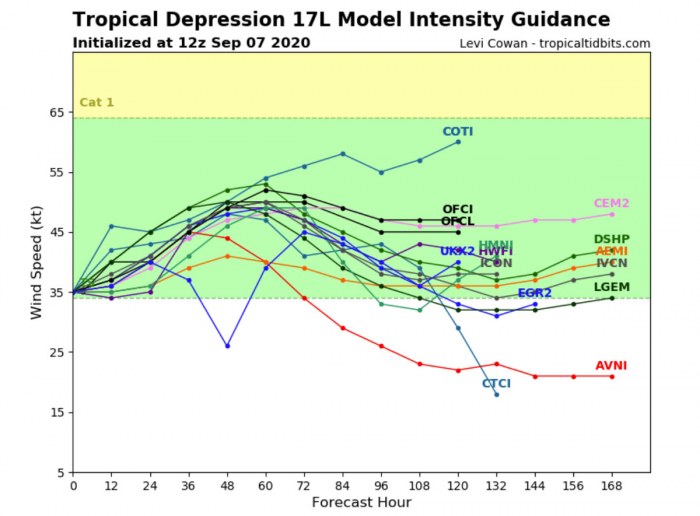 The second system, already visible on the satellite imagery and weather models, is the tropical storm, Rene. The initial tropical wave has ejected off western Africa on Sunday and is now organizing.

The system is now nearing tropical storm strength with satellite imagery indicating banding features gradually organizing on the west side of the circulation.

Rene will likely strengthen during the next few days as it remains in conducive environmental conditions of low wind shear, relatively warm waters, and a moist airmass. After the system moves away from Cape Verde, it will continue strengthening and likely become a hurricane before the weekend. 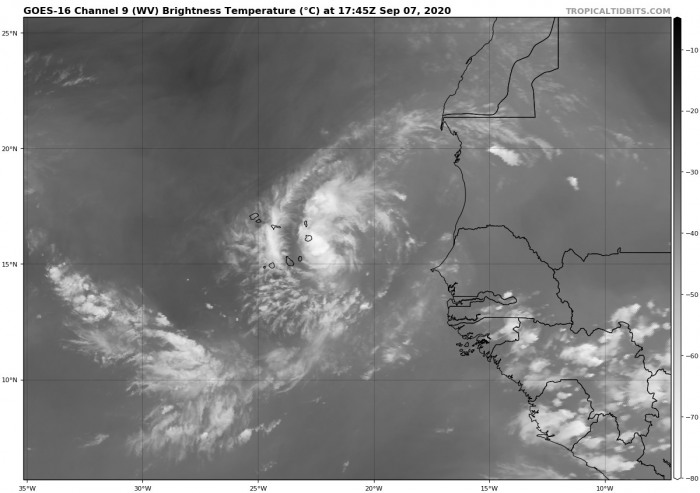 The National Hurricane Center (NHC) is fecasting Rene will maintain its Tropical storm force in the coming days. Then, Rene will be moving generally west-northwest this week. It has the potential to become a hurricane on Thursday until the next weekend. 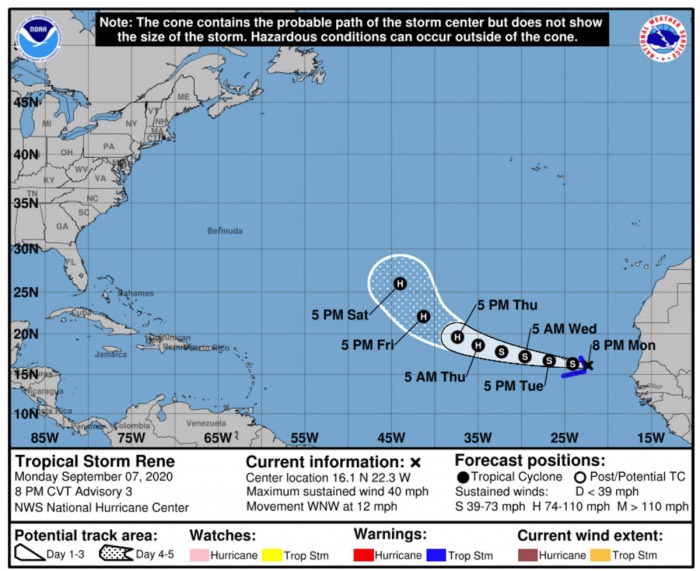 The depression eighteen strengthened into a tropical storm today. Tropical storm conditions are expected to spread over portions of the Cabo Verde Islands. A Tropical Storm Warning is in effect for those islands.

Cabo Verde is a group of islands approximately 650 km (400 miles) west of the west coast of Africa. Torrential rainfall with flash floods and some tropical-storm-force winds are possible over the isles. 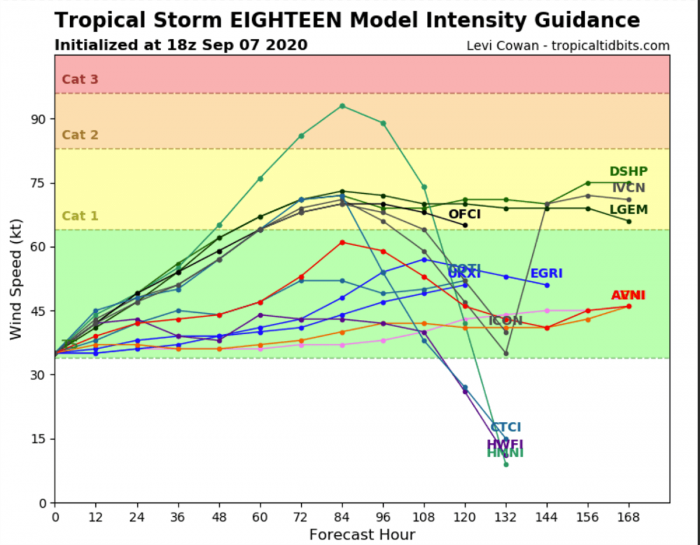 A tropical wave currently over West Africa is expected to emerge into the Eastern tropical Atlantic. The gradual development of the system is expected, and a tropical depression or storm Sally will likely form later this week.

The NHC is forecasting that there is a 50 % chance of tropical depression forming over the next 5 days.

Attached is the GFS model forecast for the Precipitable water (PWAT) across the Tropical Atlantic. All three tropical waves are very well seen:

Paulette and Rene will set records for “P” and “R” letters of named storms. Potential is there that Sally could form later this week.

Then, only 3 storm names are left for the 2020 season. If all names are used, the Greek alphabet starting with “Alpha” will be used.

That has happened only once until now – in the 2005 hurricane season. 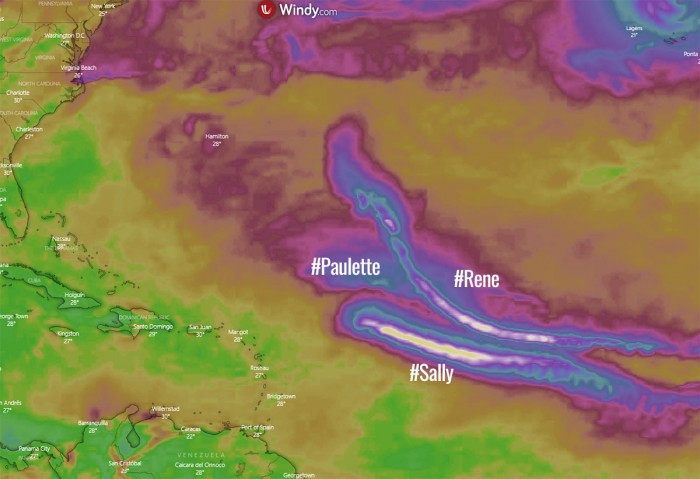 Both global models, ECMWF and GFS, are hinting all the three tropical systems Paulette, Rene and Sally could be simultaneously ongoing over the central Atlantic later this week. The most aggressive is the ECMWF model, having a train of tropical storms. 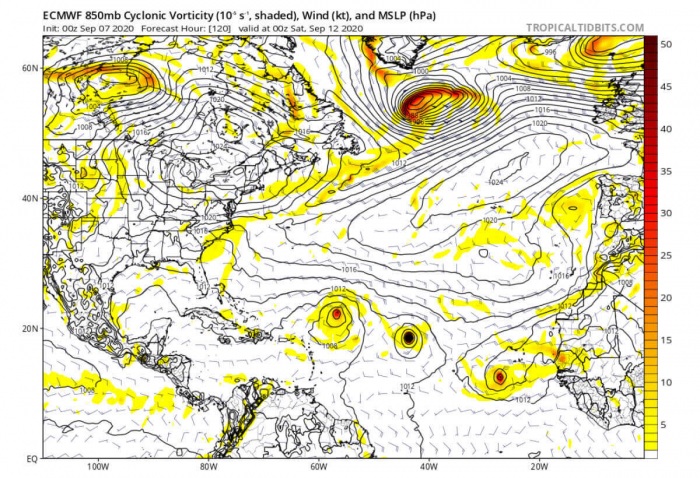 Slightly less robust is the GFS model, however. This model has Rene quite strong, while Paulette and Sally would be weaker systems. Also, they are not on the same line. 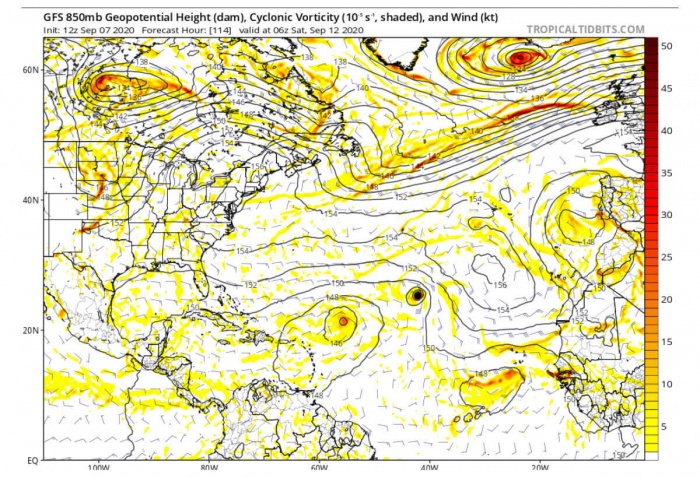 Conditions have to be closely monitored for the potential three tropical storms forming in the next couple of days.

What’s next in the Atlantic?

The Atlantic hurricane season 2020 is setting record by record with numerous storms forming. The tropical Atlantic has continued to be much above average also over the past several weeks.

Conditions are prime to support additional tropical development. The statistical peak of the hurricane season is coming this week – Sept 10th. 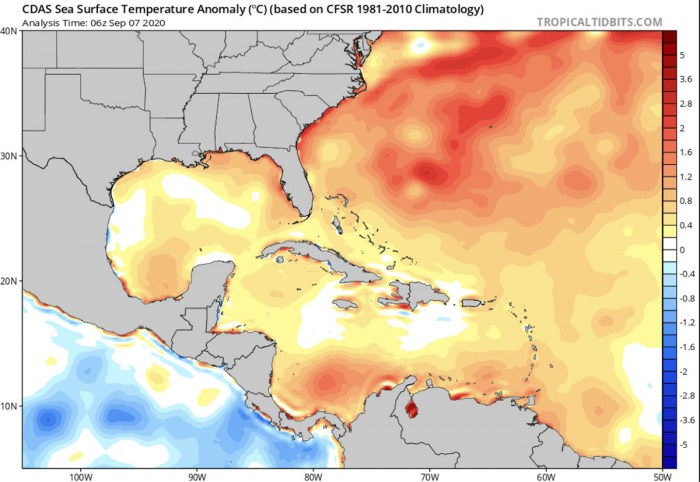 The Atlantic has already produced 4 (four) named tropical systems this September so far: Nana, Omar, Paulette and Rene. This ties 2020 with years 1980, 1988 and 2011 for the most Atlantic named storm formations in the first 7 days of September on record.

The Atlantic hurricane season normally lasts from June through November when hurricanes usually form in the Atlantic Ocean. For now, there were 16 named storms already, out of 10 which is the long-term average. The strongest storm this year was hurricane Laura which made landfall in Louisiana.

Precisely, 10.1 named storms occur each season, with an average of 5.9 of these storms becoming hurricanes. Around 2.5 of these hurricanes reach a Category 3 or greater intensity. Therefore, becoming Major hurricanes.

The most active season until now was the hurricane season 2005. An impressive 28 tropical cyclones formed in that year, of which 15 of them became hurricanes as well. 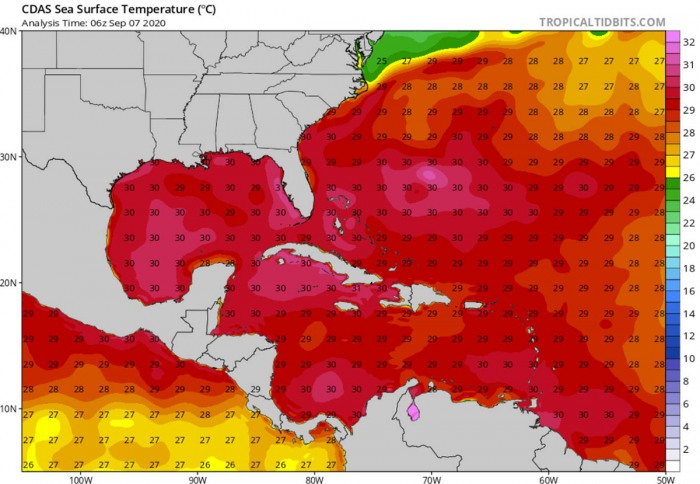 Long-range climate models through September and October suggest that ocean waters across most of the Atlantic Basin, the Caribbean, and the Gulf of Mexico will remain much warmer than average. Therefore, the peak of the hurricane season this fall will likely continue to be very busy!

*WEEKLY FORECAST* Deep Atlantic lows push an extreme warmth over Europe… but could the pattern finally change and cool down for Christmas?

«Next Post Severe Weather Outlook / Forecast for Europe – Sept 7th, 2020
The cold outbreak is spreading across the US. Santa Ana winds increasing across the West Coast Previous Post»