A monstrous and extremely dangerous hurricane Laura landfall is underway. Officially, Laura has made landfall as a 150 mph hurricane, just shy of a Category 5 strength. The eye came ashore directly into the town of Cameron, just south of Lake Charles. Catastrophic, unsurvivable storm surge, extremely intense winds, and flooding are occurring in portions of southern Louisiana.

Major hurricane Laura has tied with the Last Island (1856) hurricane. Both systems had the landfall with 150 mph (130 knots) maximum sustained winds. 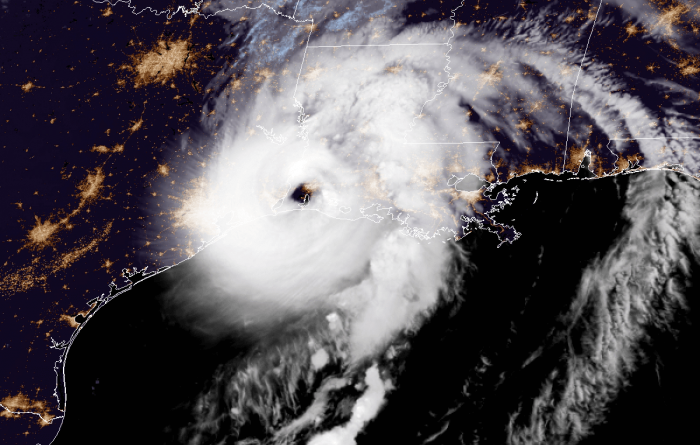 Although having breaks in the data, the weather station at the Lake Charles airport reported wind gusts of 132 mph at 1:53 am local time. That is 115 knots or 212 km/h. The most intense winds were likely missed due to missing data earlier. Sustained winds of almost 100 mph – that is a Category 2 strength. The peak was likely *much* higher! 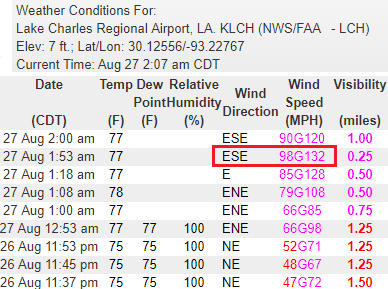 The previous recorded wind gust was 128 mph at 1:18 am. Some more than 30 min in between these measurements, so the main data inside core of the eyewall is unfortunately missing.

A classic, symmetrical signature of Laura on satellites indicates the system is going into history books. A well-defined eye surrounded by very deep convection, supporting violent winds within the inner eyewall. There is little evidence of shear with the upper-level outflow ventilation almost perfectly defined. 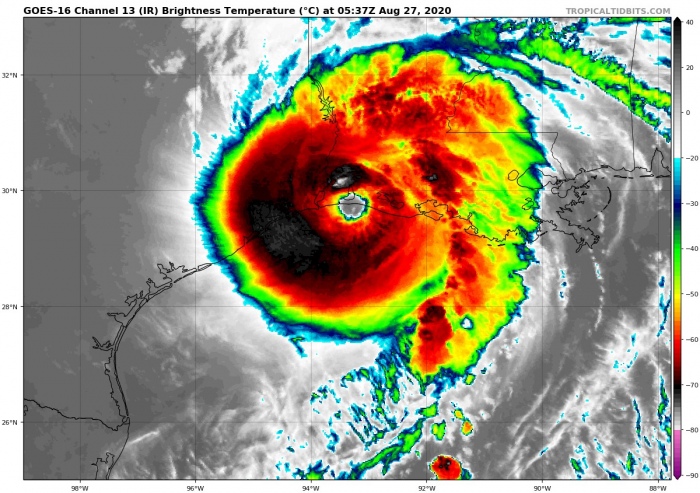 There is an upper wave visible to the northwest of Laura, over North Texas and Oklahoma. This means the system will not hold a straight northward trajectory before curving northeast over the next 24 hours. Laura will rapidly weaken while moving across Louisiana this morning but will remain a powerful hurricane. 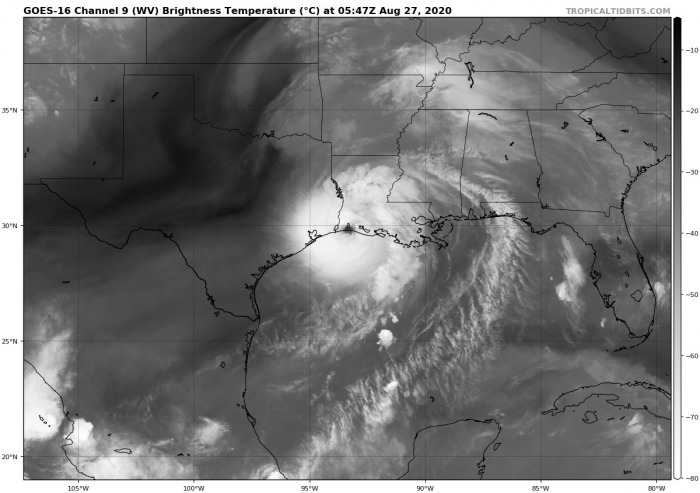 Spectacular Infrared satellite animation of Laura prior to landfall tonight:

The NOAA Hurricane Hunters data prior to landfall has revealed Laura has a solid high-end Category 4 strength, with 150 mph sustained winds per NHC Advisory. That is just 6 mph below the 156 mph threshold for Category 5 strength. The minimum central pressure was between 938 and 941 mbar at the time of landfall. 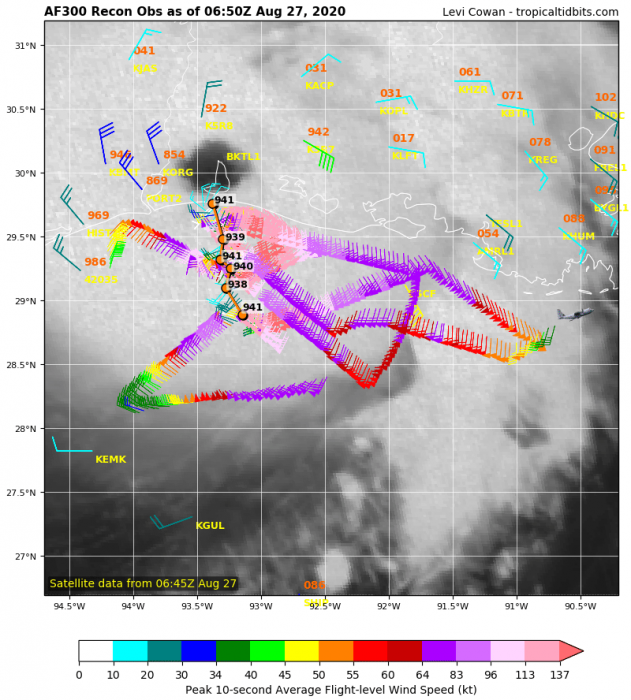 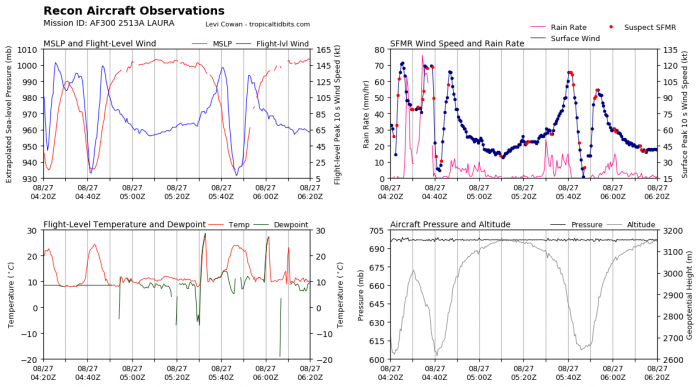 The most impressive dropsonde observation came out from the eastern eyewall – 152 knots of sustained winds just above the surface! That is 175 mph mean wind! 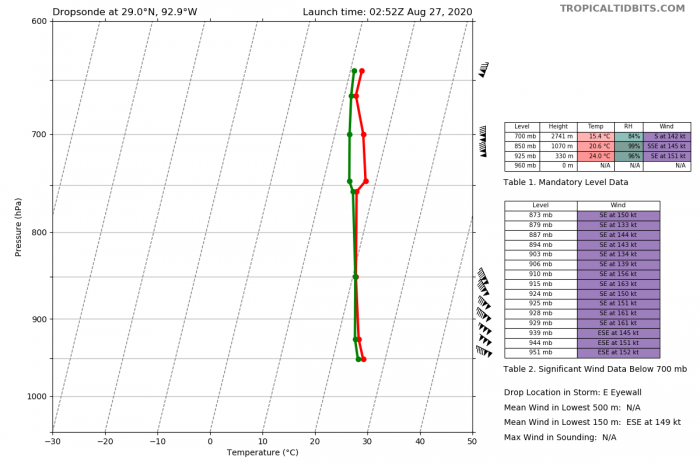 However, NOAA NHC has officially held the 150 mph sustained winds until the landfall of Laura. This puts the system at high-end Category 4 strength.

Eye is getting closer. Really strong gusts now. Power is out pic.twitter.com/D6AJo3LRwc

Radar imagery even showed up Eddie vortex signature (marked in red) across Sulphur during the eye passage. These vortices (tornadoes) at the edge of the inner eyewall can bring even more extreme winds than the eyewall itself. 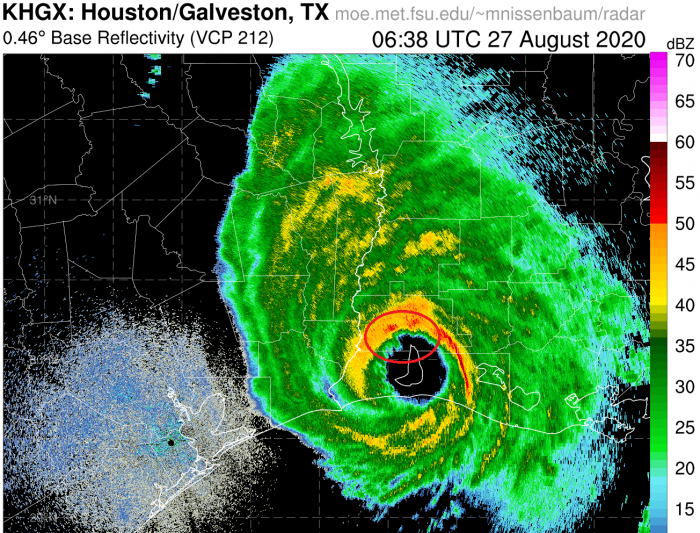 Please refer to the initial forecast discussion for further movement and impact of Laura after landfall: