An unprecedented event is underway across the United States this September. While a record-breaking heatwave is shattering record along the West Coast, and unusually intense cold outbreak is bringing snow and cold into the Great Plains and the Rockies. The outbreak will also develop intense Santa Ana winds, which could significantly worsen the ongoing destructive wildfires in California!

Record, more than 2 million acres have already burned in California, and things are likely to get worst. A cold outbreak coming from Canada will develop an intense Santa Ana wind event and help to reduce humidities to fuel the ongoing wildfires.

Intense cold outbreak spreading across the US

An unusually intense cold outbreak continues spreading south across the continental US on Tuesday. Cold air mass has already spread into Colorado and Nebraska, reaching Kansas on Tuesday morning. 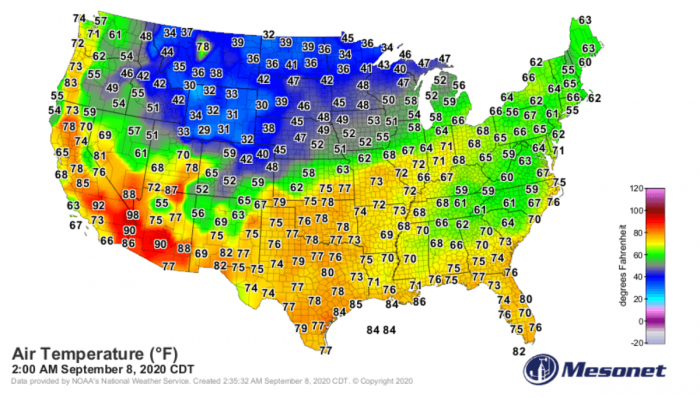 Extremely cold early September air mass is already spreading across the central and High Plains on Tuesday. 25-30 °C colder air mass than normal is maximized over Colorado, Wyoming, and the Rockies. 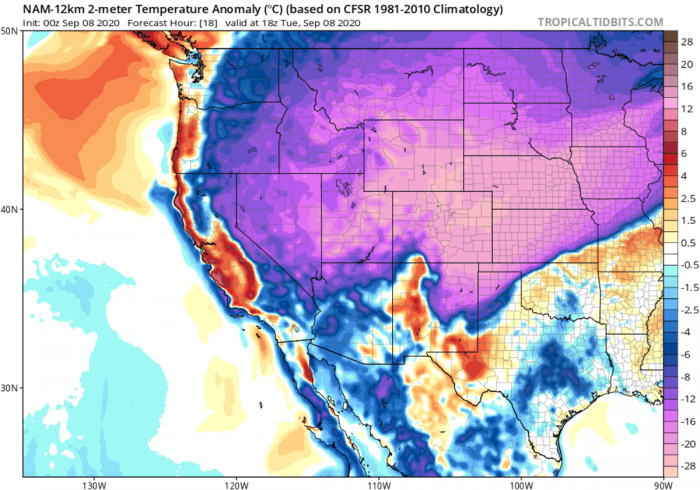 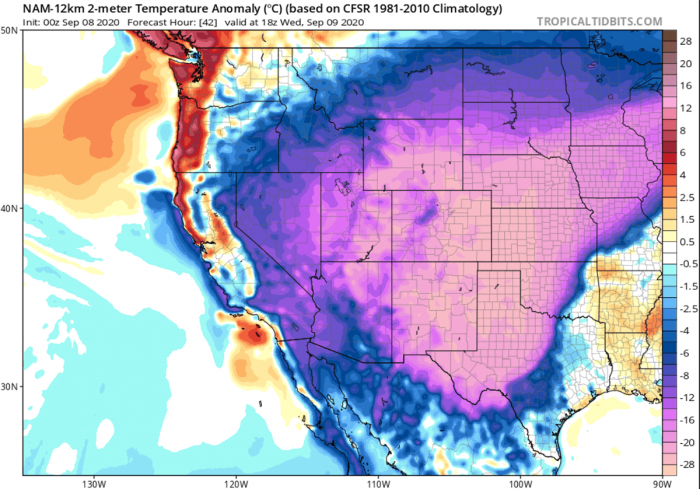 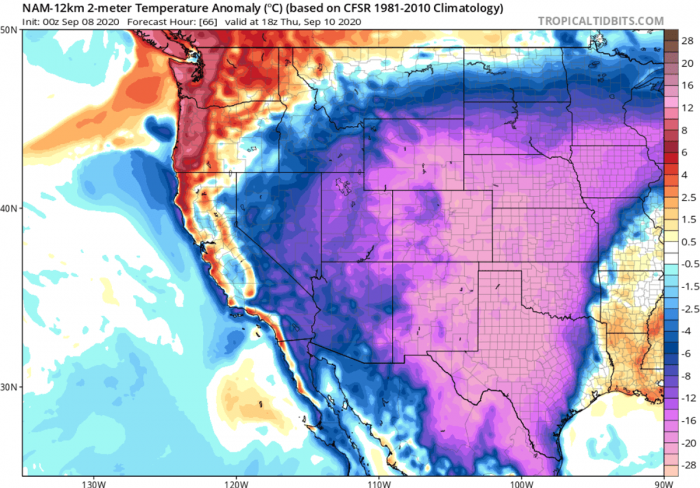 Heavy rainfall/snow are forecast along the front

As typically with such cold outbreaks coming south from Canada, a strong high-pressure system develops over the Northern US Plains. Increasing winds push high moisture and therefore heavy precipitation towards the Rockies, gradually spreading south.

The air mass is very cold, so snowfall is developing over Wyoming and into Colorado on Tuesday. 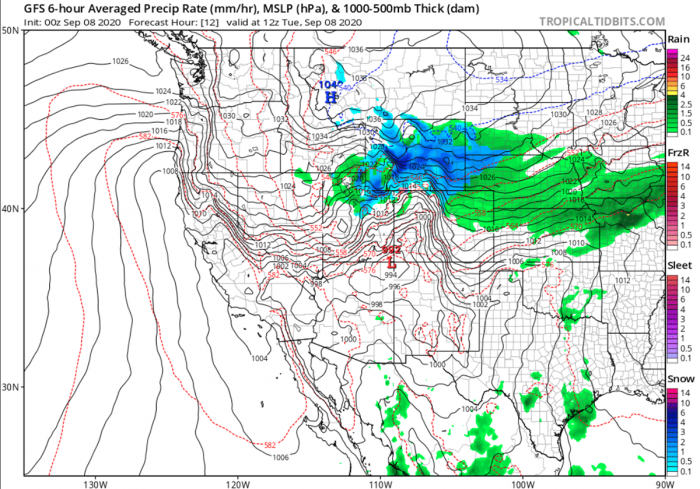 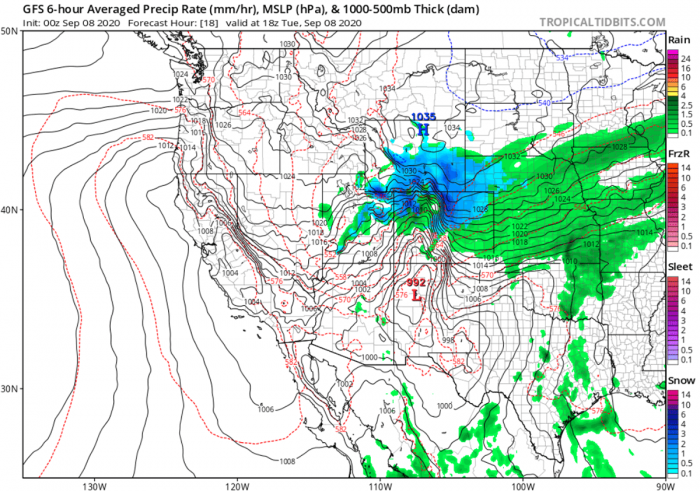 With the progress of the cold outbreak further south, snowfall is also expected along the foothills of the slopes and possibly even into the eastern Colorado plains on Tuesday night.

Particularly heavy snowfall could occur across the southern Colorado foothills and mountains from late Tuesday into Tuesday night at times. 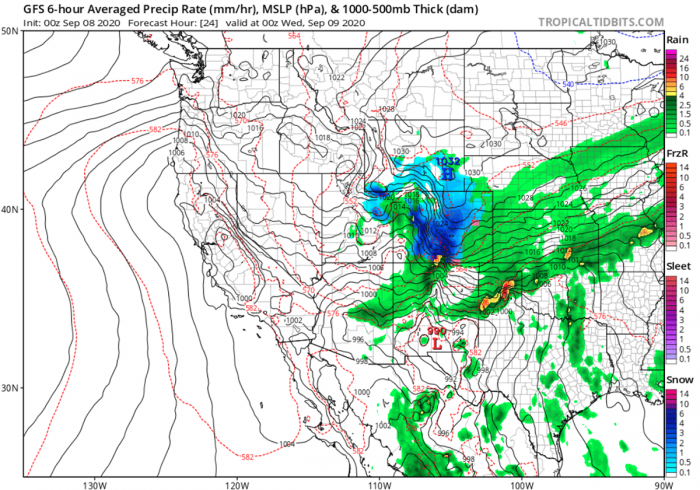 Ahead of the front, a combination of upper-level forcing and lift should also introduce heavy rainfall across the Panhandles into Oklahoma and southern Kansas. A strengthening pressure gradient will result in strong winds, thus significantly lowering the windchills as well. 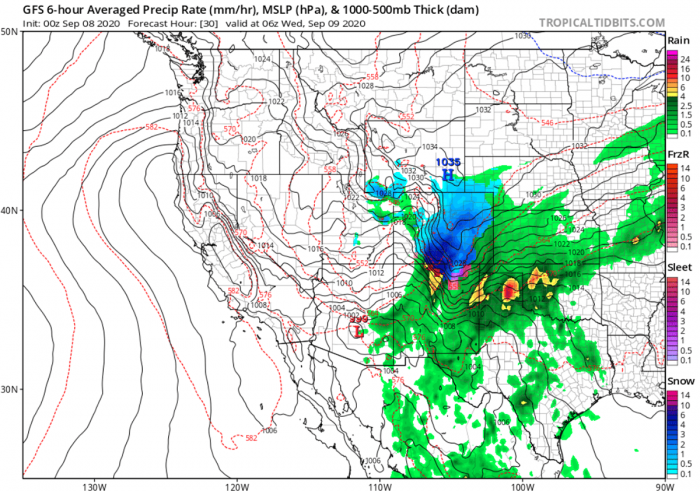 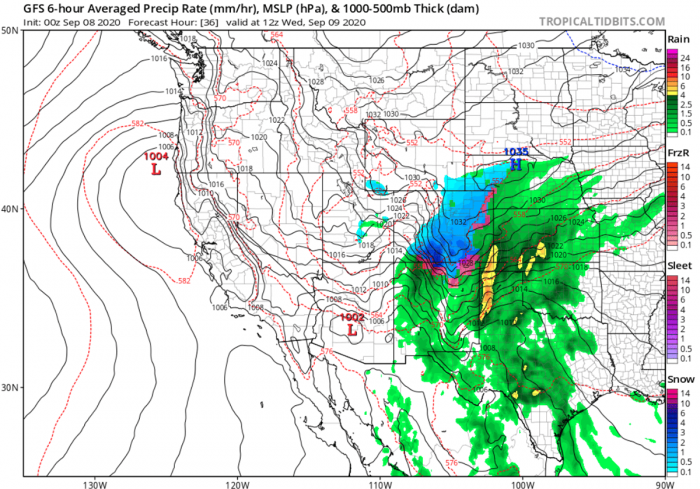 Attached is the animation of the 2m temperature anomaly, snow forecast, and a developing significant Santa Ana wind event across California along with the intense cold outbreak across the United States. Maps by NAM model, source: TropicalTidbits / Wxcharts.

As the cold outbreak matures to the east of the Great Basin, the surface high-pressure ridge will support downslope flow across the Rockies towards the West Coast on Tuesday.

Winds will likely be intensifying and spreading into lower elevations (California) after dark and into Wednesday. 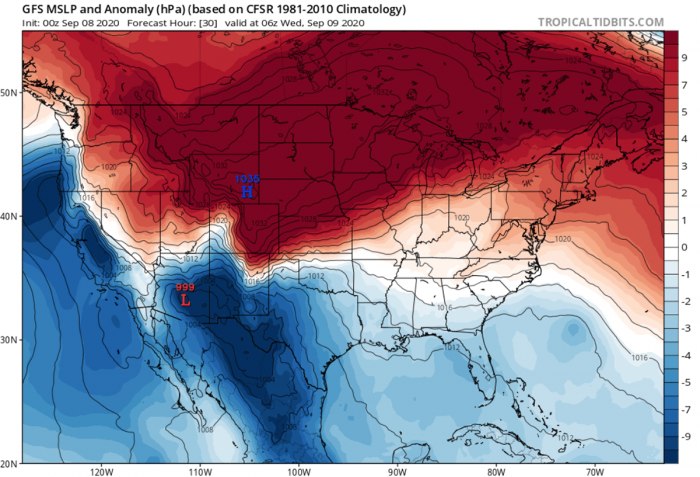 It also results in strong offshore winds from the Pacific Northwest into California. A significant wind event – Santa Ana wind event – will develop.

Gusty Sundowner winds across southern Santa Barbara county and gusty northerly winds in the Los Angeles and Ventura county mountains (especially near the Interstate 5 corridor) will likely bring critical Red Flag fire weather conditions to these areas. The critically dry fuels will result in a greater threat of fire ignitions as well as rapid-fire growth. 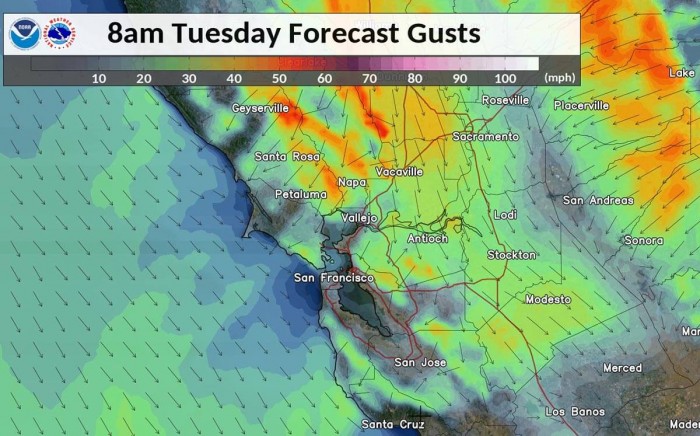 Wind gusts of 50-60 mph are possible in parts of Washington and Oregon through Tuesday and California on Wednesday. These strong Santa Ana winds, particularly below passes and canyons may rapidly spread existing wildfires in California and lead to critical fire threats. 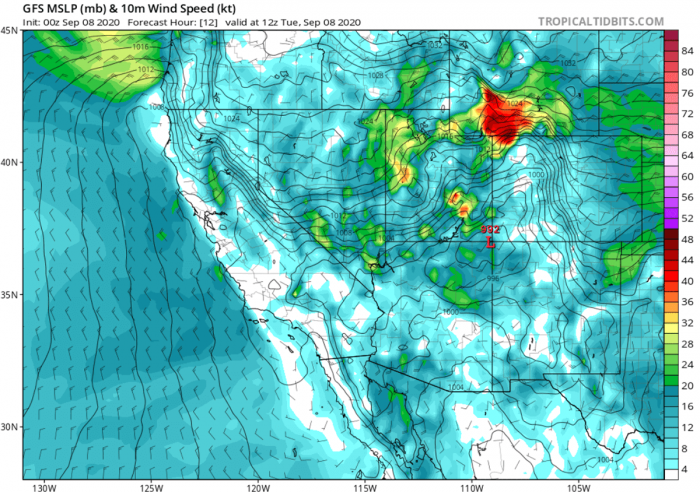 Surface winds could reach up to 60 mph on Tuesday night into Wednesday. And in addition, very low (sub 10 % Rh) humidity values will develop in higher elevations during the day.

While only very poor recoveries overnight through Wednesday (should stay below 15 % Rh). These conditions will support rapid fire spread, and extreme fire behavior may also occur with any large fires. 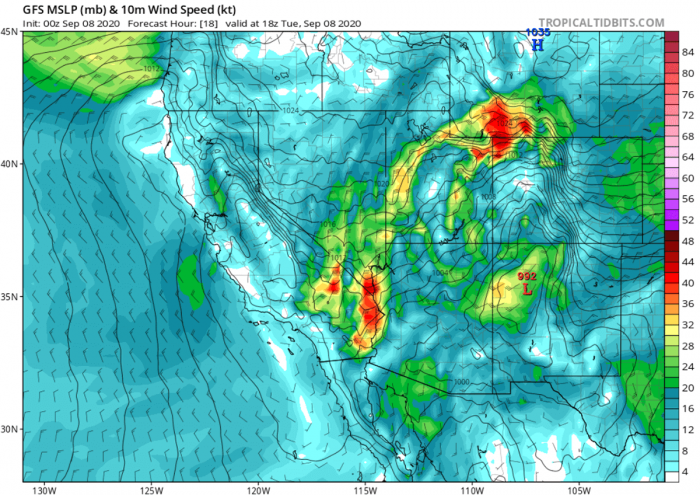 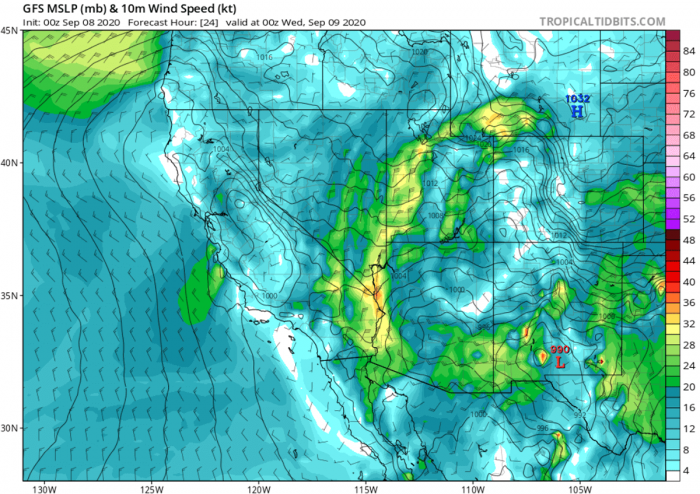 When winds are reaching 50 to 60 mph, power lines are very vulnerable to being blown over and sparking can occur. And therefore starting fires in the wild.

Extreme fire risk is expected to continue in the coming days this week, thanks to increased Santa Ana winds and extremely low humidity. A red flag warning is in effect through Wednesday morning, likely to be extended further. The National Weather Service is forecasting wind gusts of up to 65 mph.

California ‘fire season’ is the most pronounced in the fall months. Santa Ana winds combined with dried-out vegetation increase wildfires threat at its minimum of the low soil moisture. This is why a dry season typically develops at the end of summer.

The ongoing record-breaking heatwave across California brought temperatures into the 42-45 °C (above 110F) range and very low humidities (below 10 % Rh) for the Labor Day weekend.

The Woodland Hills, California hit unprecedented peak temperatures of +49.4 °C (121F), settings a new all-time record. This was the hottest temperature on record in Los Angeles County, according to the National Weather Service.

Death Valley set its new September record on Saturday, after reaching +51.7 °C (125F)! This was just 0.5 °C (1F) off the all-time September high for the whole US, which was recorded in Mecca, California back in Sept 1950. 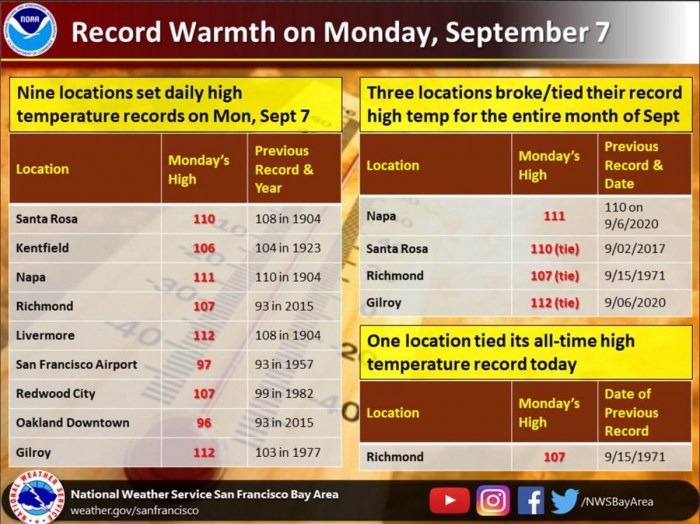 Downtown Oakland set a new record high-temperature Monday of +35.6 °C (96F). This broke the previous record of 93F, set in 1957. Other cities that set Sept. 7 records include and Santa Rosa.

The Labor Day weekend was the hottest for more than 50 years across California!

The extreme record-breaking heatwave and dry season brought an additional explosion of wildfires across the western US. One of the fires is named as ‘Creek Fire’, which generated an exceptional pyrocumulonimbus cloud, taken from the flight nearby. Notice the overshooting tops and explosive updrafts!

Due to the Creek Fire burning out of control, the authorities evacuated the entire town of Auberry on Monday. A mountain community of 2.500 in central California.

The U.S. Forest Service decided to close all eight national forests in the southern half of the state of California.

Two of the three largest and destructive fires in California history are burning in the San Francisco Bay Area. More than 14.000 firefighters are battling those fires.

The wildfire situation throughout California is dangerous and must be taken seriously. Existing fires are displaying extreme fire behavior, new fire starts are likely, weather conditions are worsening, and we simply do not have enough resources to fully fight and contain every fire said Mr. Randy Moore, regional forester for the Forest Service’s Pacific Southwest Region.

The smoke cloud has been spread across much of California extending also into Nevada, Utah, and Colorado. Attached are the NASA MODIS satellite views of the smoke cloud through Sunday and Monday.

The prevailing westerly winds on Sunday have extended the smoke cloud into northern Nevada, reaching Utah and Idaho as well. 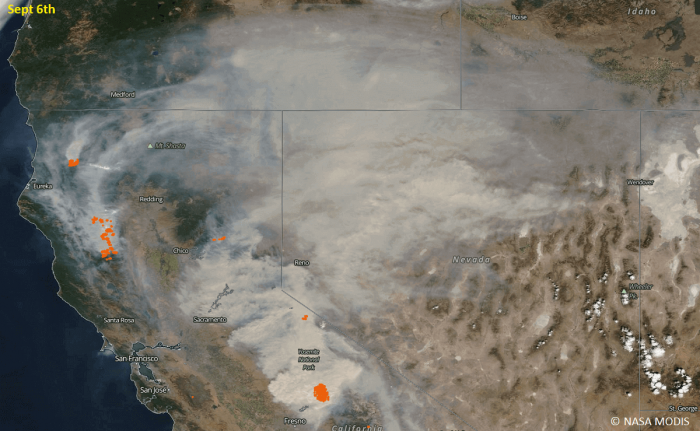 On Monday, the approaching Canadian upper trough has turned the winds to become more northwesterly. Therefore, the smoke cloud from the large fires in northern and central California is spread towards the southeast. Reaching southern Nevada and Arizona. 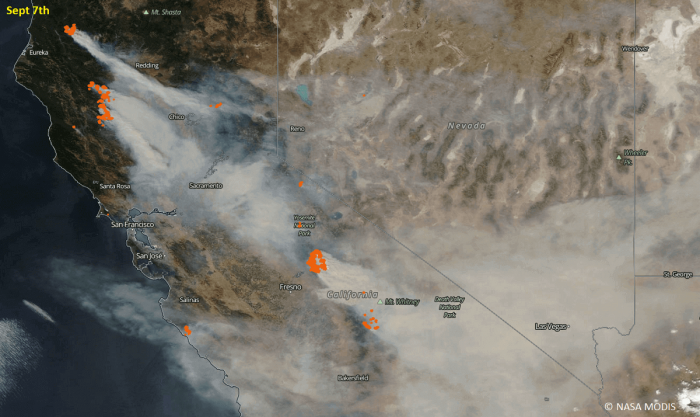 Another exceptional wildfire, named as ‘Cameron Peak Fire’ is ongoing, uncontrolled in Colorado. More than 90.000 acres have burned so far. Its smoke cloud has been visible from space on Monday. 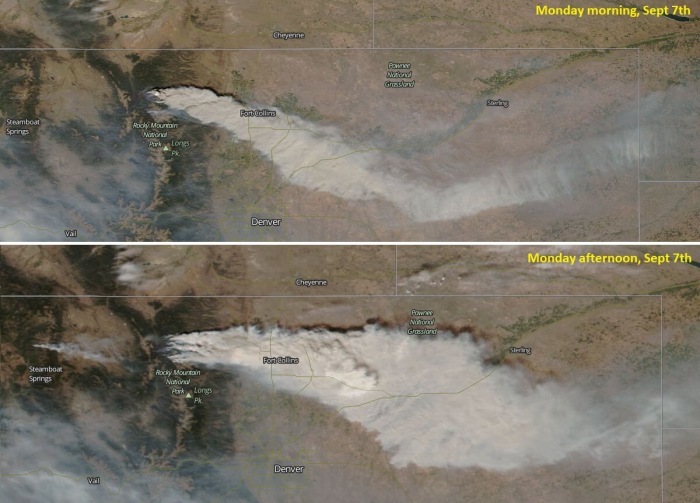 What is another remarkable event with the fire, is the arrival of the snowfall and cold outbreak. It will continue snowing over the Cameron Peak Fire until Thursday. 20-30 cm (6-12 inches) is likely to be expected across the burning area.

Thankfully, the snow coming over the fire area will be very helpful. And should help to limit the fire spread.

The Cameron Peak Fire began burning almost a month ago, on August 13th, and has escalated particularly over the Labor Day weekend.

What are Santa Ana winds?

The Santa Ana winds are katabatic winds, meaning they are flowing downhill from the higher altitudes towards the sea level. They originate from high-pressure air masses over the Great Basin and the upper Mojave Desert. While the low-pressure system is located just off the coast over the Pacific.

The pressure difference between these features results in the air mass flowing from high pressure in the Great Basin to a low-pressure center off the coast. Therefore, it creates an accelerating/channeling flow through the mountain passes to the lower coastal elevations.

Santa Ana winds are most common through the autumn and winter months, from October through March, but they can occur anytime from September into June. Santa Ana winds are known for the hot, dry weather that they bring in autumn into California.

Given their original, coming from the elevated areas into to lowlands, their downslope nature translates into very low humidity. Thus, this wind event often results in the lowest relative humidities of the year to coastal Southern California.

While the Santa Anas are downslope, katabatic winds, they are not Foehn winds. Foehn winds result from precipitation on the windward side of a mountain range which releases latent heat into the atmosphere which is then warmer on the leeward side.

A katabatic wind (named from the Greek word meaning ‘descending’) is a drainage wind. It carries high-density air from a higher elevation down a slope under the force of gravity.

The air has already been dried by orographic lift before reaching the Great Basin. The upper-level subsidence also helps in additional warming which causes the relative humidity to fall below 10 percent Rh.

The end result is a strong, warm, and very dry wind blowing out of the bottom of the mountain passes into the valleys and coastal plain. A katabatic wind originates from the radiational cooling of air atop a plateau, a mountain, glacier, or a hill.

Stay alert for extremely dangerous conditions as Santa Ana winds could worsen the ongoing wildfires. And tune in to your local National Weather Service office for the latest updates and warning messages.