June 1st marks the start of the hurricane season for the Atlantic basin. As every year, there will be 21 storm names in use for the events that meet certain criteria and finally being named as a tropical depression, storm, or hurricane if they strengthen further. Hurricane season 2021 storm names list starts with Ana and ends with Wanda.

Storms are given a name to help communication between forecasters and for public awareness. Using different and specific names during the hurricane season also helps forecasters to track and supplying information on multiple storms that could be ongoing simultaneously. 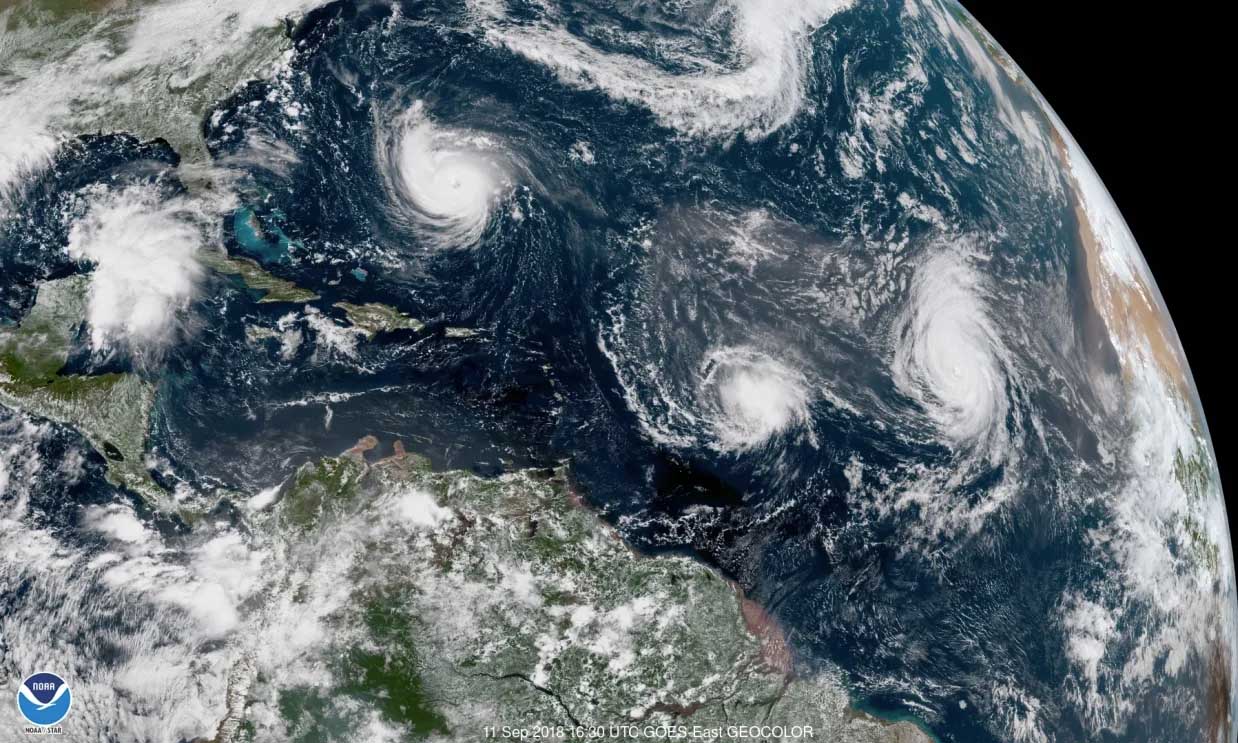 Above: Several tropical cyclones simultaneously ongoing in the Atlantic basin

Everyone surely remembers the rough hurricane season last year, as it produced an unprecedented 30 named storms in total. Before that, the most active Atlantic hurricane season was 2005, which brought Katrina, Rita, Wilma, and other devastating hurricanes.

The Atlantic basin covers the area which includes the entire Atlantic Ocean, the Gulf of Mexico, and also the Caribbean Sea. The recent weeks have shown that the Atlantic Ocean water temperature is already much warmer than normal.

This also includes the temperatures in the region known as MDR – Main Development Region (tropical area between Africa and the Caribbean Sea) where tropical cyclone formations usually occur. As warm ocean waters are the main source of fuel for tropical cyclones, this is surely an important factor to be aware of again this year’s hurricane season coming up.

In our first forecast discussion several weeks ago, we were discussing the various forecasting sources hinting at yet another very active hurricane season in 2021, with an above-average number of tropical storms and hurricanes likely.

As we noted, there is also another quite concerning part of the forecast for the hurricane season this year. Forecasters are giving a very high, near 70 % chance of a major hurricane landfall along the U.S. coastline. Note, that a typical season has about a 50/50 probability of the U.S. mainland being impacted by a major hurricane.

Please refer to the link below to read further details on the forecast for this year:

Let’s focus on some background on how storms get designated names and the science behind them.

The international committee of the World Meteorological Organization (WMO) has designated 21 storm names that are being reserved for the Atlantic hurricane season 2021. The 2021 list with all the storm names can be seen below, starting with Ana and ending with Wanda. 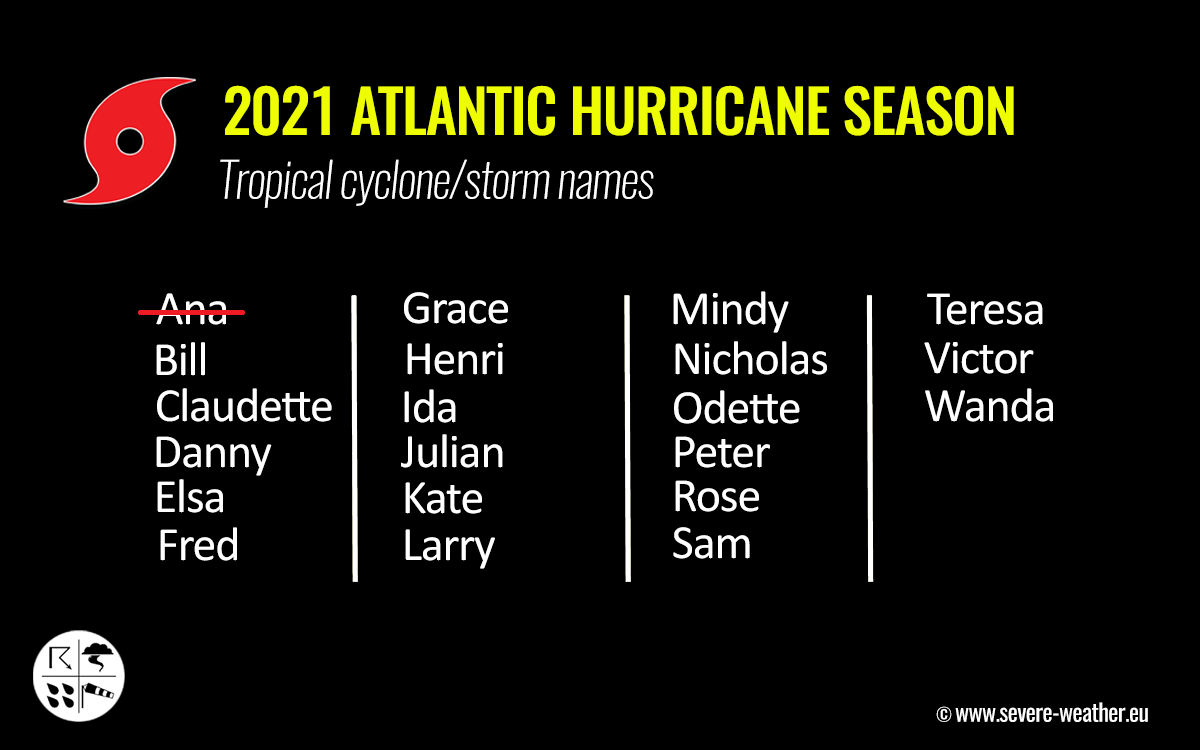 There is also one important change in the tropical cyclone naming from now on. A list of alternative names for tropical cyclones will be used instead of Greek Alphabet letters that were in use until 2020. According to the World Meteorological Organization, their members decided to abandon the usage of the Greek Alphabet as it created an unnecessary distraction from the communication of potential hazardous storms.

So, has your name appeared this year? If not, maybe it will make the cut for the hurricane season next here. These are the reserved 21 tropical cyclone names for 2022 across the Atlantic Basin: Alex, Colin, Bonnie, Danielle, Earl, Fiona, Gaston, Hermine, Ian, Julia, Karl, Lisa, Martin, Nicole, Owen, Paula, Richard, Tobias, Shary, Virginie, and Walter.

For the better tracking of the severe weather events in the tropical regions around the world, a rotating list of names is used. These lists repeat every six years. For example, the list of designated storm storms during the hurricane season 2021 will again be used in 2027. Male and female names are alternated in the list.

Above: Tropical Cyclone names for the Atlantic from 2021 to 2026

Across the Atlantic Basin, there are 21 names listed for the upcoming years. These storm names are reserved to be used for tropical cyclone formations. The same number of storms was indeed also designated in 2020, but given the so active and record-breaking hurricane season, the list was already used by Sept 18th with the letter ‘W’ being used for the Tropical Storm Wilfred in the Eastern Atlantic. and it did continue with 9 more Greek Alphabets.

Note: If hurricanes develop historic proportions, or they become particularly deadly or costly to life and property, their names are retired. Retired names for the recent hurricane season, if any indeed occurs, will always be announced by the World Meteorological Organization (WMO) in the spring months. The retired name is then replaced by another one.

The naming of the tropical cyclones is used for one main reason – to help in the quick identification of storms in warning messages.

Systems having a certain name are presumed to be much easier to remember than numbers and other more technical terms that could be used for their identification among meteorological offices and the public.

It is also easier for the general media to report on tropical systems forming, so the warning messages with storm names are straightforward information for anyone.

Above: Pronunciations of Tropical Cyclone names from 2021 to 2026

This, in the end, increases public awareness which is the most important thing when it comes to particularly dangerous weather events.

The advantages of the storm names are quite important in exchanging detailed information about the ongoing systems between various users, including coastal bases, and ships traveling at the sea, and indeed also between the various meteorological offices (e.g. Storm Prediction Center who focused on convective outlooks across the U.S. and the National Hurricane Center.

To have the most information out of a storm naming system, NOAA meteorologists decided to create a list of names that are arranged alphabetically.

Therefore, a storm with a name that begins with the letter ‘A’, as Tropical Storm Ana in 2021, would be the first storm to occur in the year. The last letter is ‘W’, therefore Wanda for the hurricane season 2021. 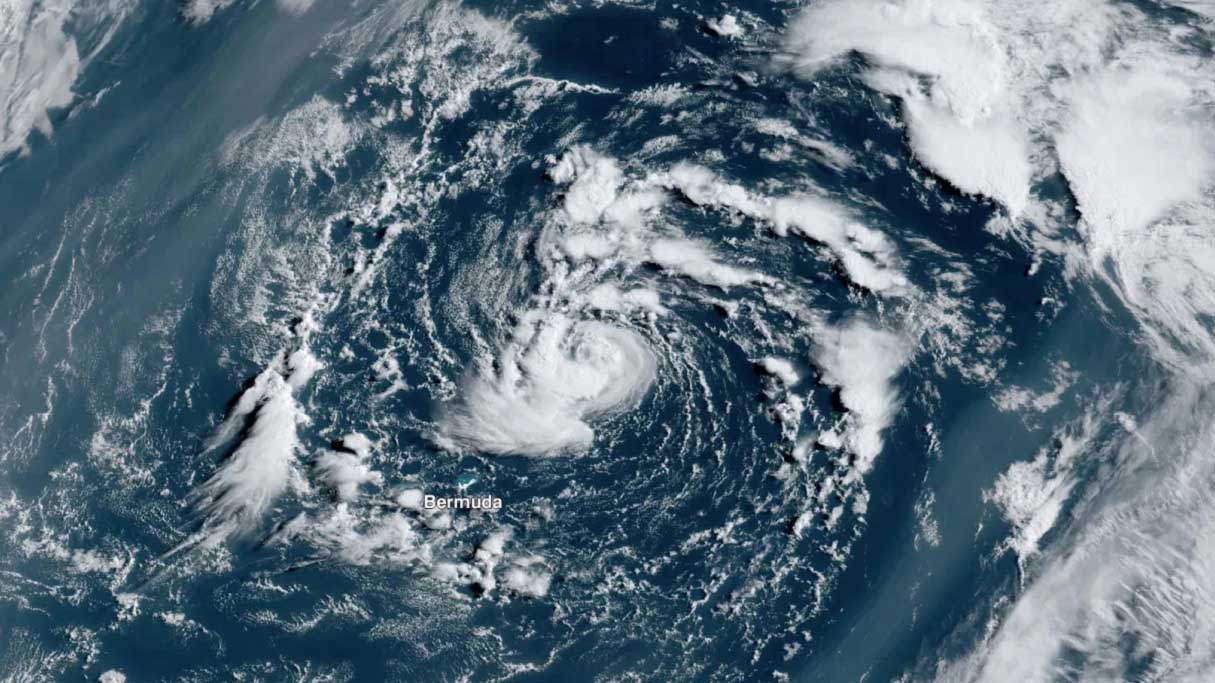 Above: Tropical Storm Ana developing east of Bermuda, May 22nd, 2021

The list of storm names always covers only 21 letters of the alphabet. The letters Q, U, X, Y, and Z are not in use, since it is difficult to find six suitable names every season. As indeed, for the instantly recognizable straight-to-the-point events, names have to be easy to read, write, and remember.

The Atlantic tropical cyclone events have been named from lists originated by the National Hurricane Center, started in 1953. Nowadays, the names are maintained and updated by an international committee of the World Meteorological Organization (WMO).

If a tropical storm or a hurricane reaches a significant strength that brings a deadly or costly impact, the list gets some changes as such storm is being retired. A new name is then used, replacing the retired designated storm name from the list.

One of the main reasons to use different names is also the fact it would be inappropriate for reasons of sensitivity since that retired storm brought significant damage and loss of life with its landfall. 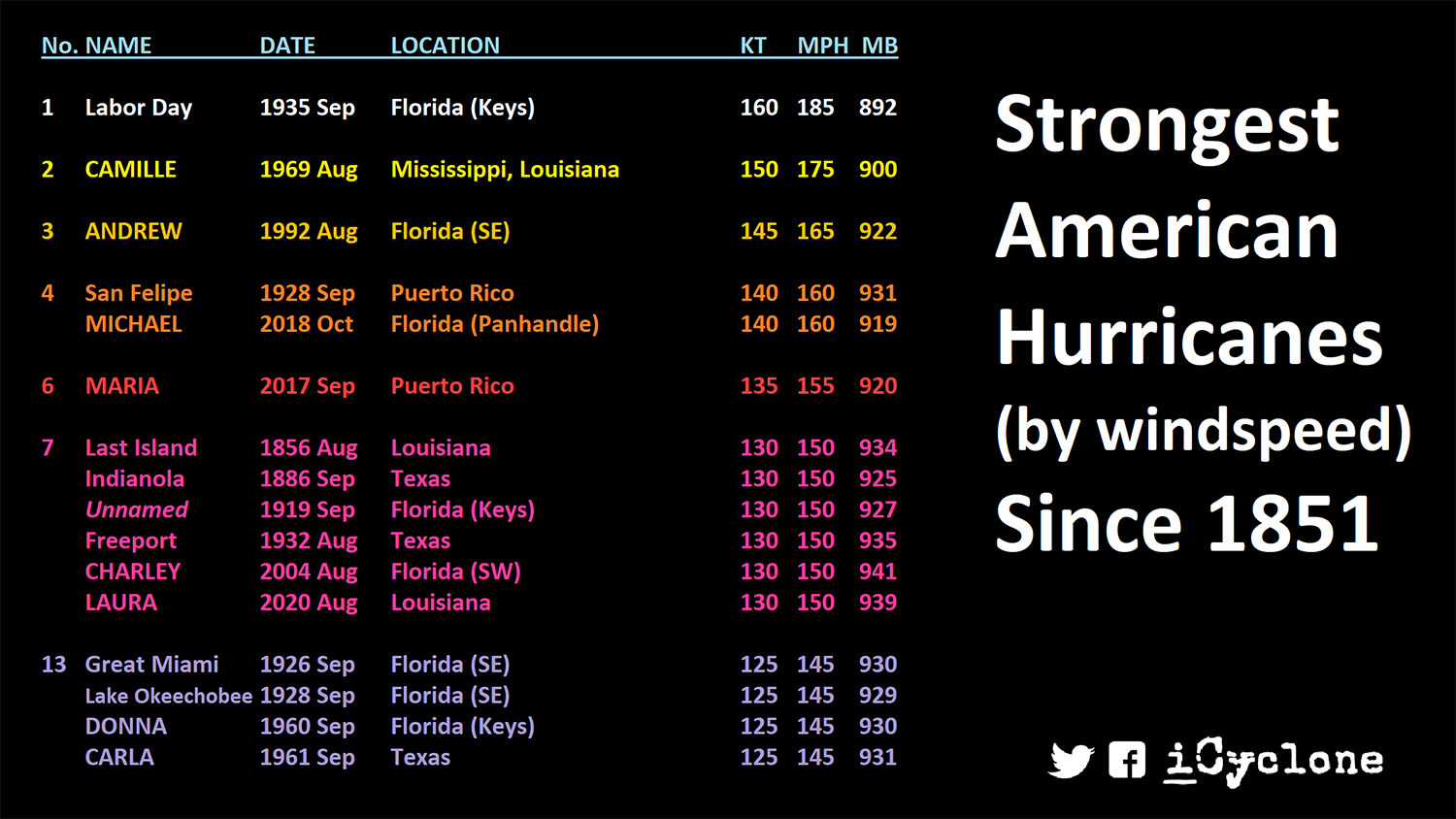 Above: The strongest U.S. mainland hurricanes (by wind speed). Graphics made by hurricane chaser Josh Morgermann aka iCyclone

These are the infamous storm names that have brought particularly severe damage and a large number of casualties: 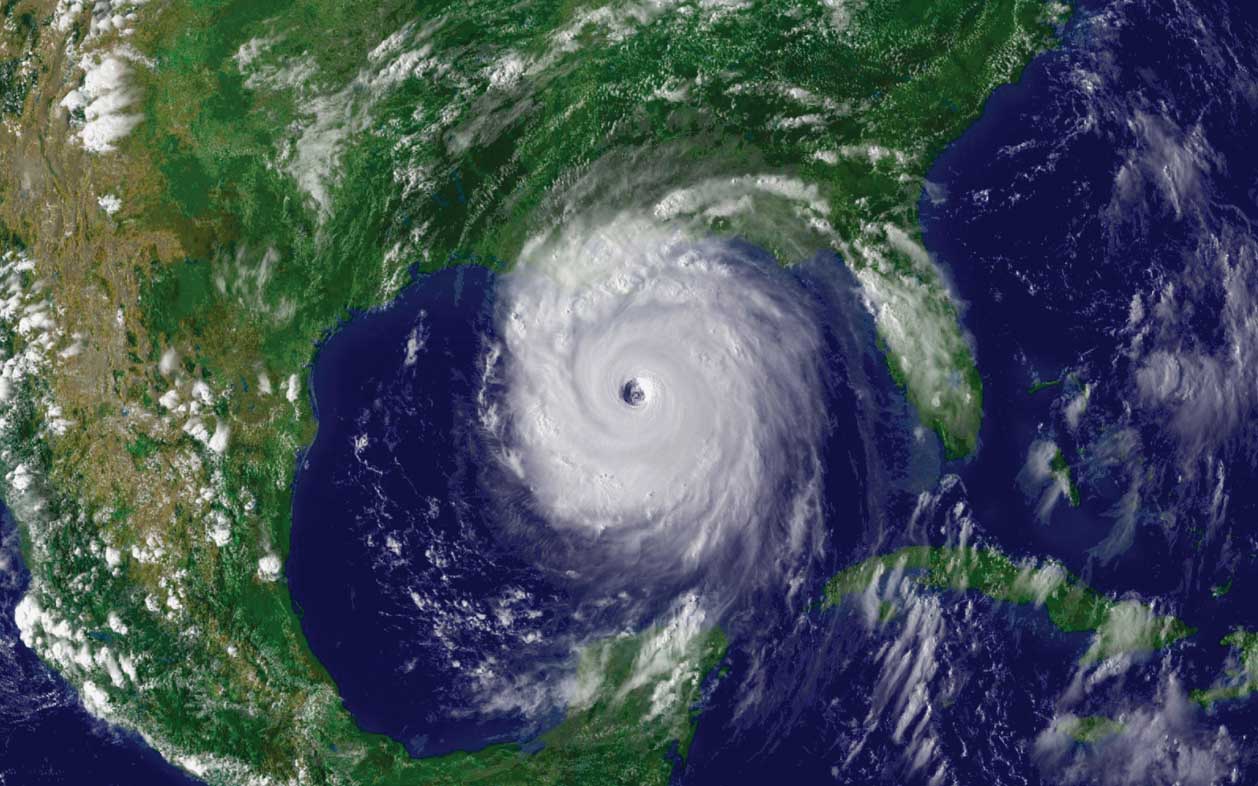 Above: Hurricane Katrina intensifying in the Gulf of Mexico, August 28th, 2005.

Katrina, for example, was replaced with Katia when the list cycled back in 2011.

So far, 93 storm names have been retired and replaced by new names set by the World Meteorological Organization (WMO) since 1954. The latest were hurricane Laura, hurricane Eta and hurricane Iota from the hurricane season 2020. 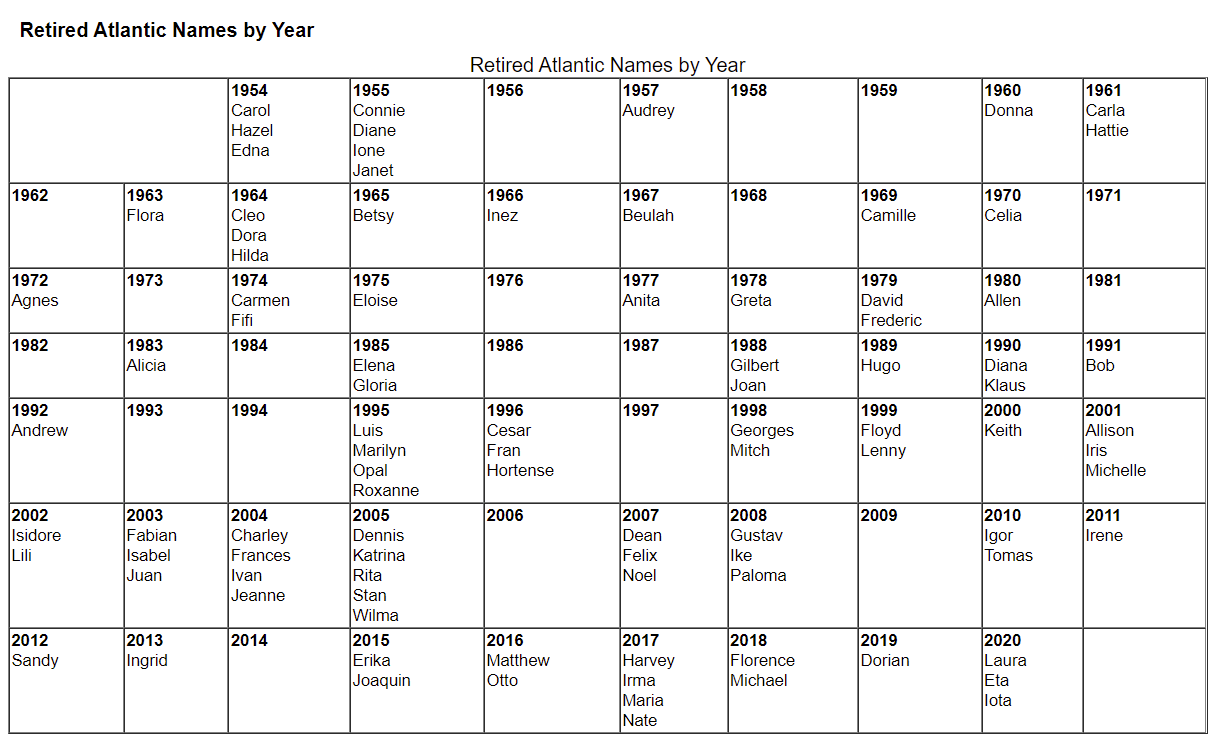 Above: Retired hurricanes over the Atlantic Basin since 1954

Until 2020, there was a Greek Alphabet naming of the storms in use. But the WMO decided to discontinue the usage of the Greek Alphabet for various reasons, one of them being that there can be too much focus on the use of Greek alphabet names and not the actual impacts from the storm.

So from now on, the use of the so-called Alternate Name List follows. This new list gets in use when more than 21 named tropical cyclones occur in the Atlantic basin in one hurricane season.

WHO decided that the same goes also for the tropical cyclones in the eastern North Pacific basin, if more than 24 named storms occur. 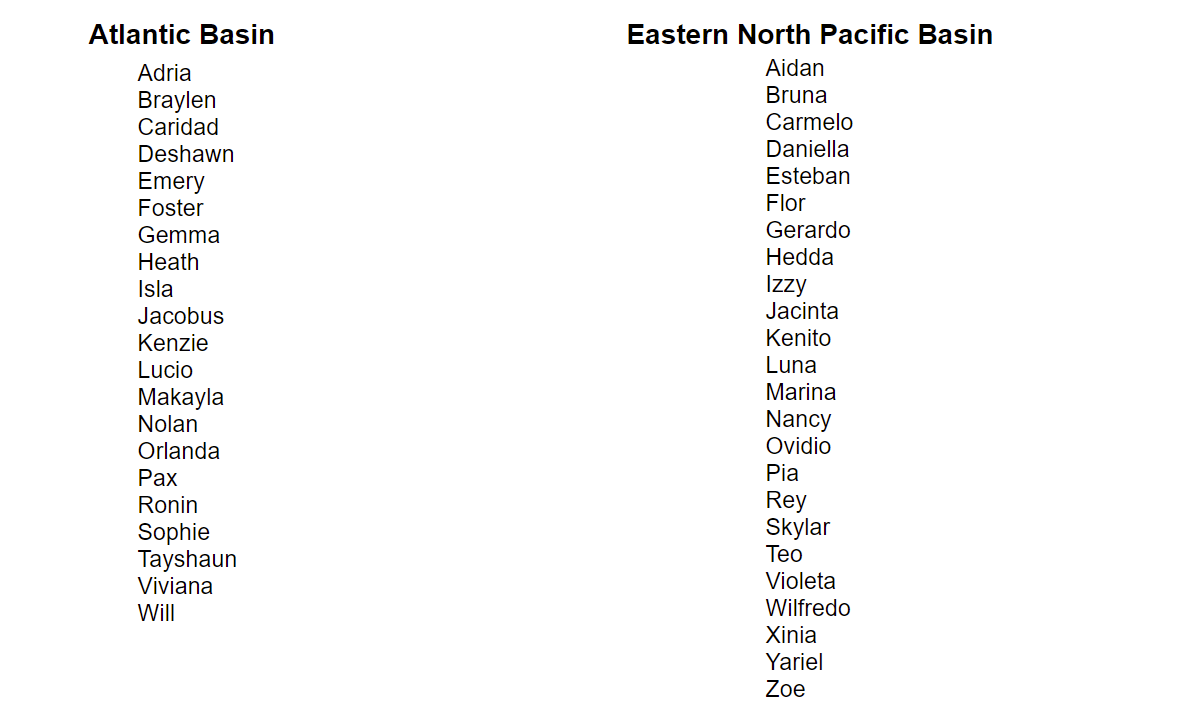 Our team experts will be actively monitoring the tropical region activity worldwide, including the Atlantic Basin tropical cyclones that are likely to affect both the United States and Europe again this year.

Stay tuned for further follow-up posts, forecast discussions, and nowcasting during the coming weeks and throughout the entire Atlantic hurricane season 2021.