After a quite spectacular Supermoon – Blood Moon celestial on May 26th, parts of the Earth are now expecting the first solar eclipse of 2021. And it will be a rare one! An Annular Solar eclipse, known as the Ring of Fire will happen on June 10th. What is it and where are the best places to watch it?

On June 10th, the moon comes into Earth’s elliptical orbit, resulting in what is known as the Solar Eclipse. But as the moon will be too far from the Earth to completely cover over the sun, something rare will happen – a bright ring will surround the new moon silhouette at the peak time of the solar eclipse. 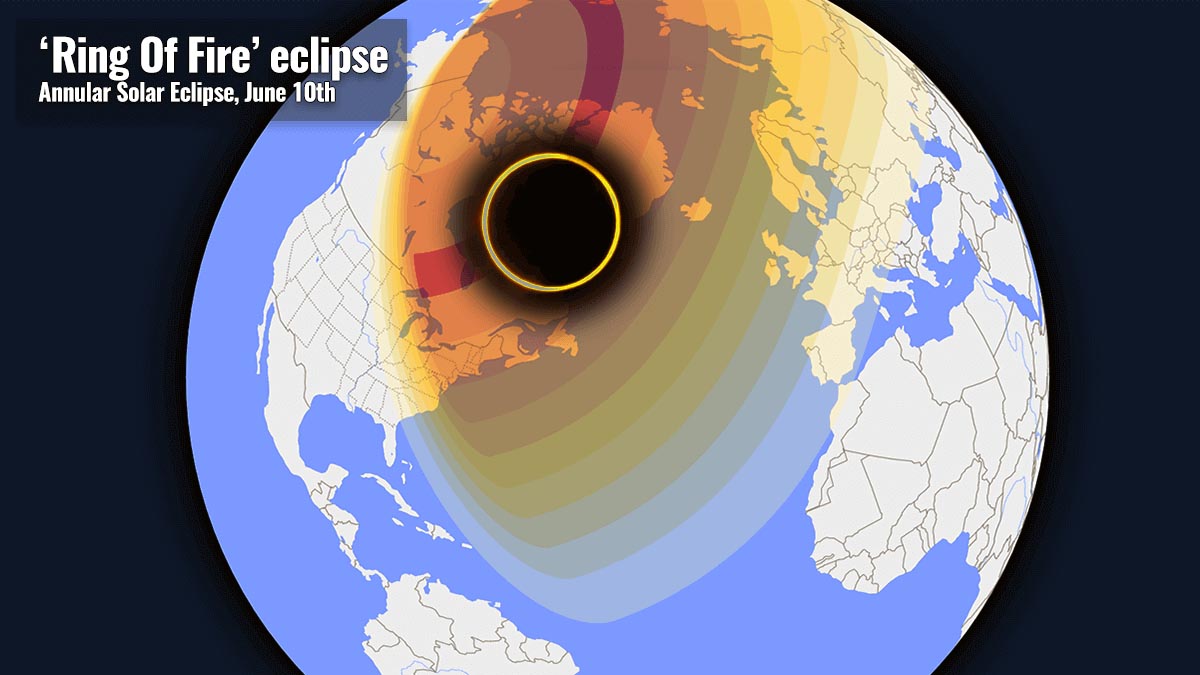 It is the outer rim of the sun. This occurrence is best known as the Ring Of Fire eclipse.

The annular eclipse will start at sunrise over the northern part of Lake Superior (Ontario, Canada). It continues across the Arctic region (Greenland) across the North Pole through midday and ends up over northeast Siberia at sunset. 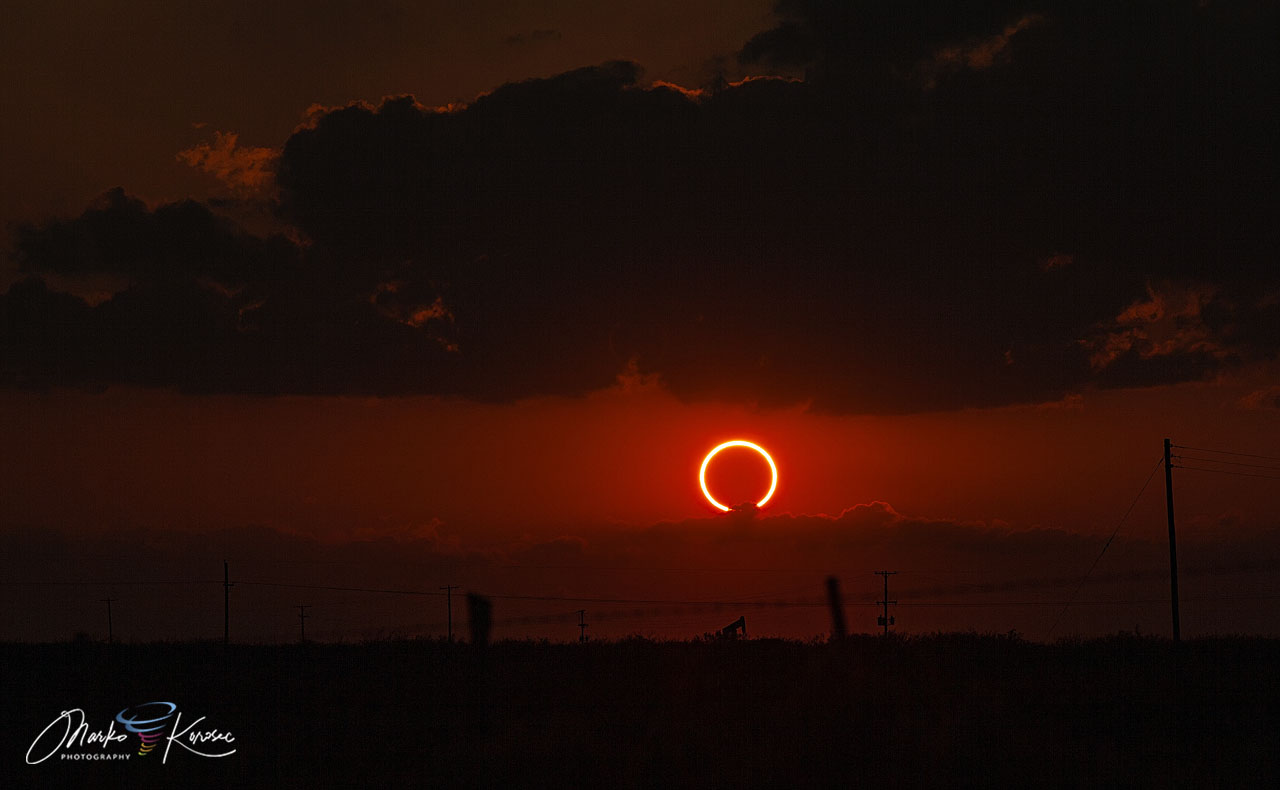 Above: A Ring Of Fire solar eclipse in Texas, May 20th, 2012. Photo by Marko Korosec

The middle eclipse or the Ring Of Fire stage of the eclipse will last almost 4 minutes, 3 minutes, and 51 seconds precisely.

These kinds of eclipses are counted as partial but are a very dramatic celestial show with the annulus ring of bright light appearing in the sky. Many who had seen it, can tell you it is a spectacular event to experience.

Note: The Solar eclipse, partial (annular) or total, could cause you eye damage if would watch it with the unaided eye. ALWAYS use eye protection to watch any kind of solar eclipses. While the Lunar Eclipse can be watched without any danger.

WHAT IS THE SOLAR ECLIPSE?

A solar eclipse happens when the Moon crosses between the Sun and the Earth. The Moon partially or completely blocks the Sun’s light to the viewers on part of the Earth’s surface, casting a shadow.

So, a total solar eclipse is when the Moon, the Sun, and the Earth all line up such that the moon completely blocks out the sun to viewers on part of Earth’s surface. Below is the schematic diagram, so it is easier to imagine how the solar eclipse occurs. 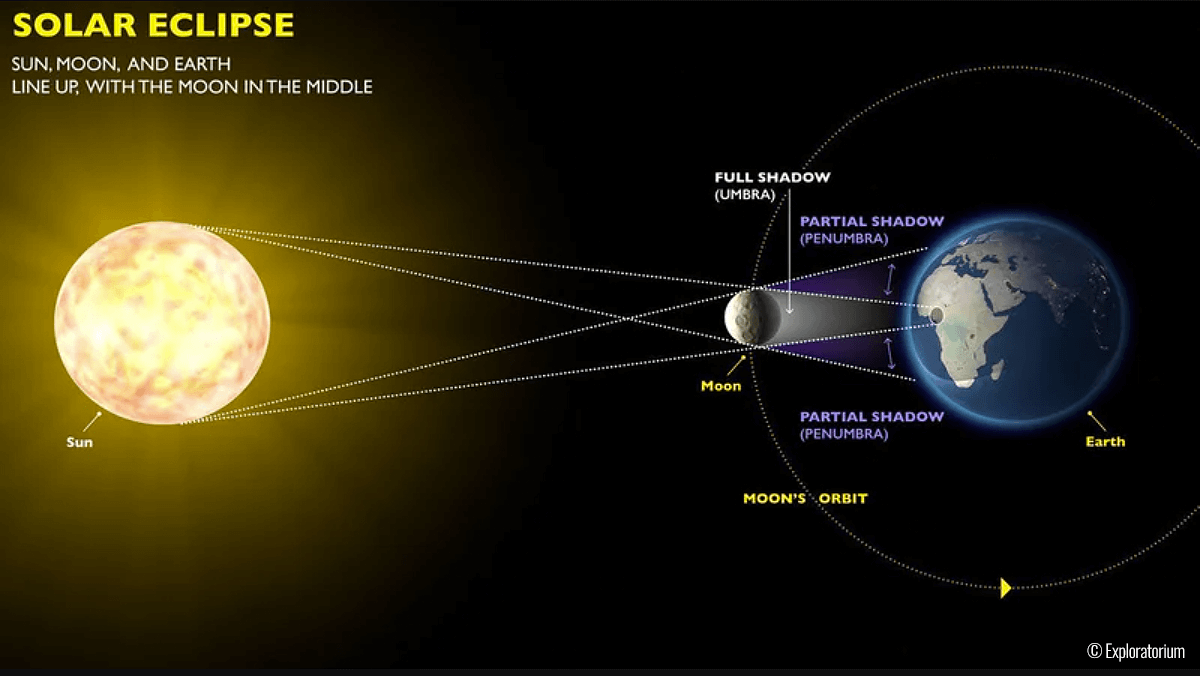 Actually, we, the residents of Earth are quite lucky to be able to see total solar eclipses. As we can see from the diagram above, a lot of factors are needed to align together that an eclipse happens. The moon needs to be just the right size and distance from Earth, that its shadow cast appears on the surface. 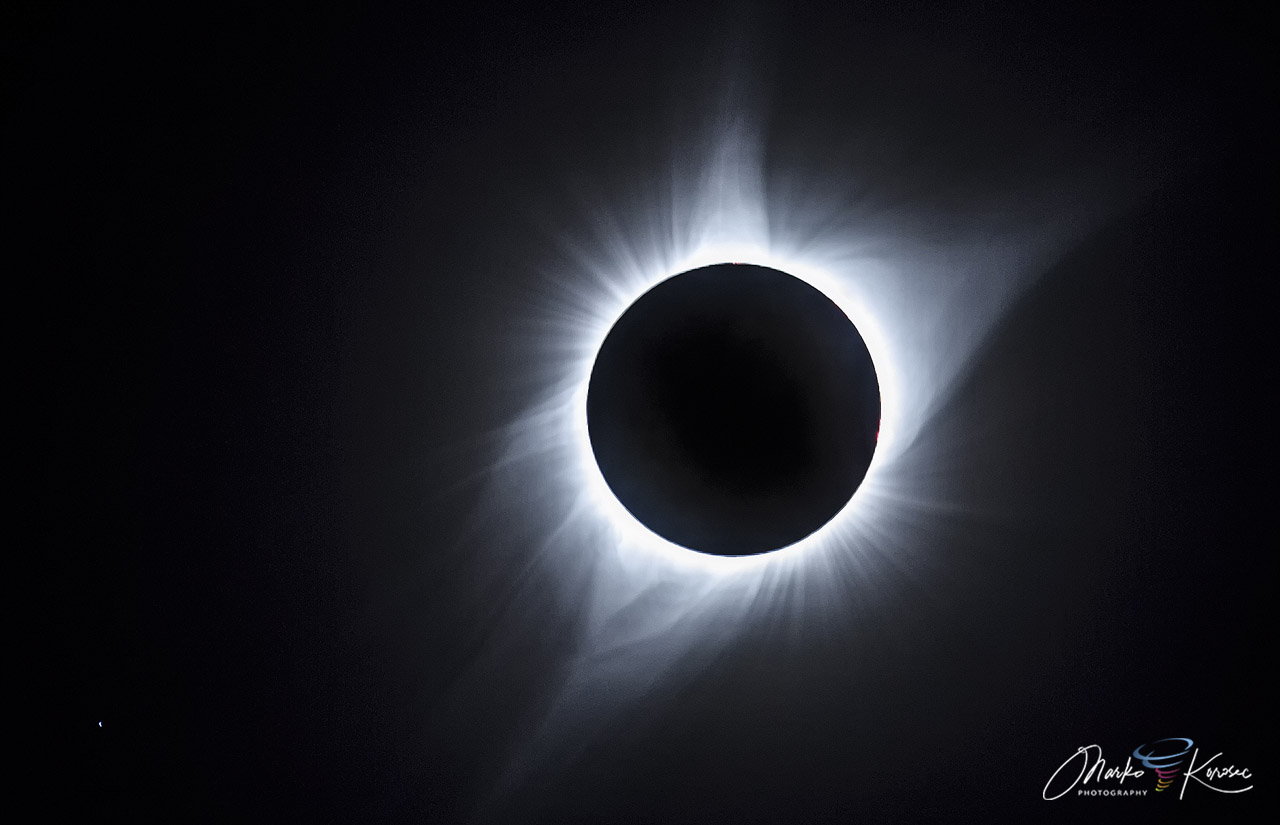 Above: A total solar eclipse in Wyoming on August 21st, 2017. Photo by Marko Korosec

This difference comes as the Moon doesn’t orbit the Earth in a perfect circle. Instead, it travels in an elliptic orbit that brings the Moon closer to and farther from Earth in its orbit at times. 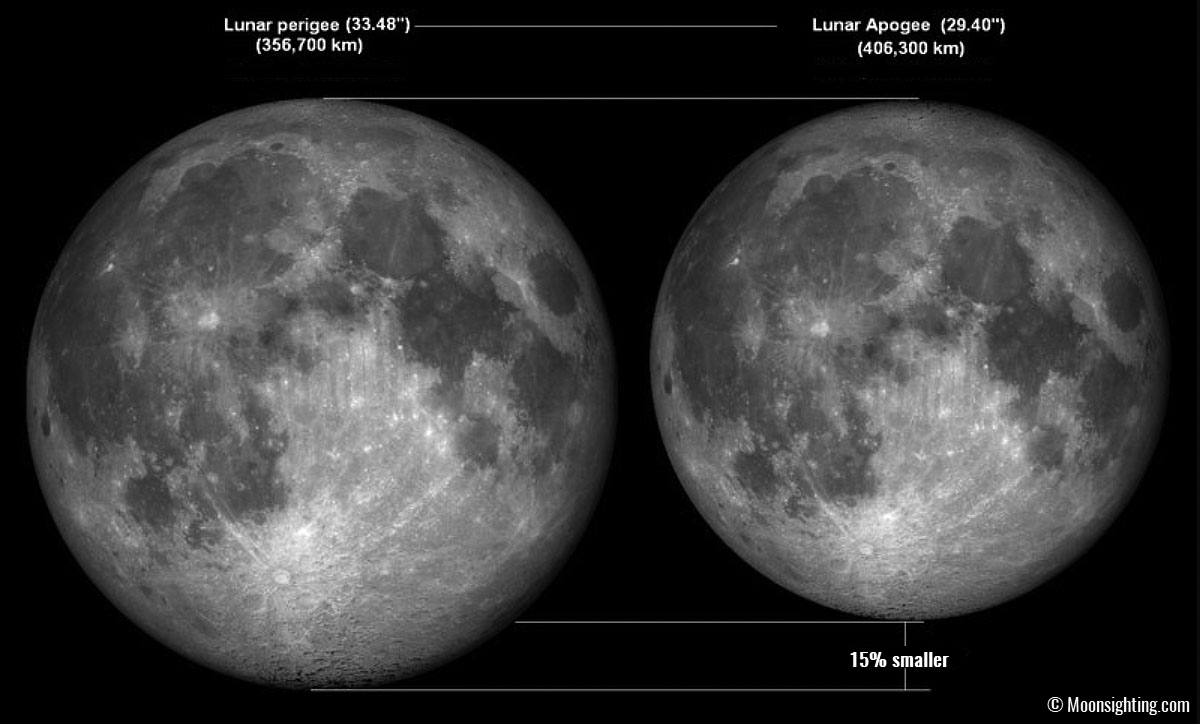 Note: The Total Solar Eclipses are strongly localized and short-term events, thanks to the geometry of eclipses. The Moon’s shadow is therefore pretty narrow when it reaches the Earth’s surface. This means that areas where the total or annular eclipse is visible, are also very small.

The Moon’s umbral shadow is at most 165 miles (267 km) across on the Earth with the totality lasting up to about 7.5 minutes, with the shadow sweeping rapidly from west to east. So the patch of fast-moving darkness across Earth’s surface brings the swath of totality only for people observing within this narrow band.

While people outside the path of totality will only see a partial eclipse, as the moon covers only a portion of the Sun. 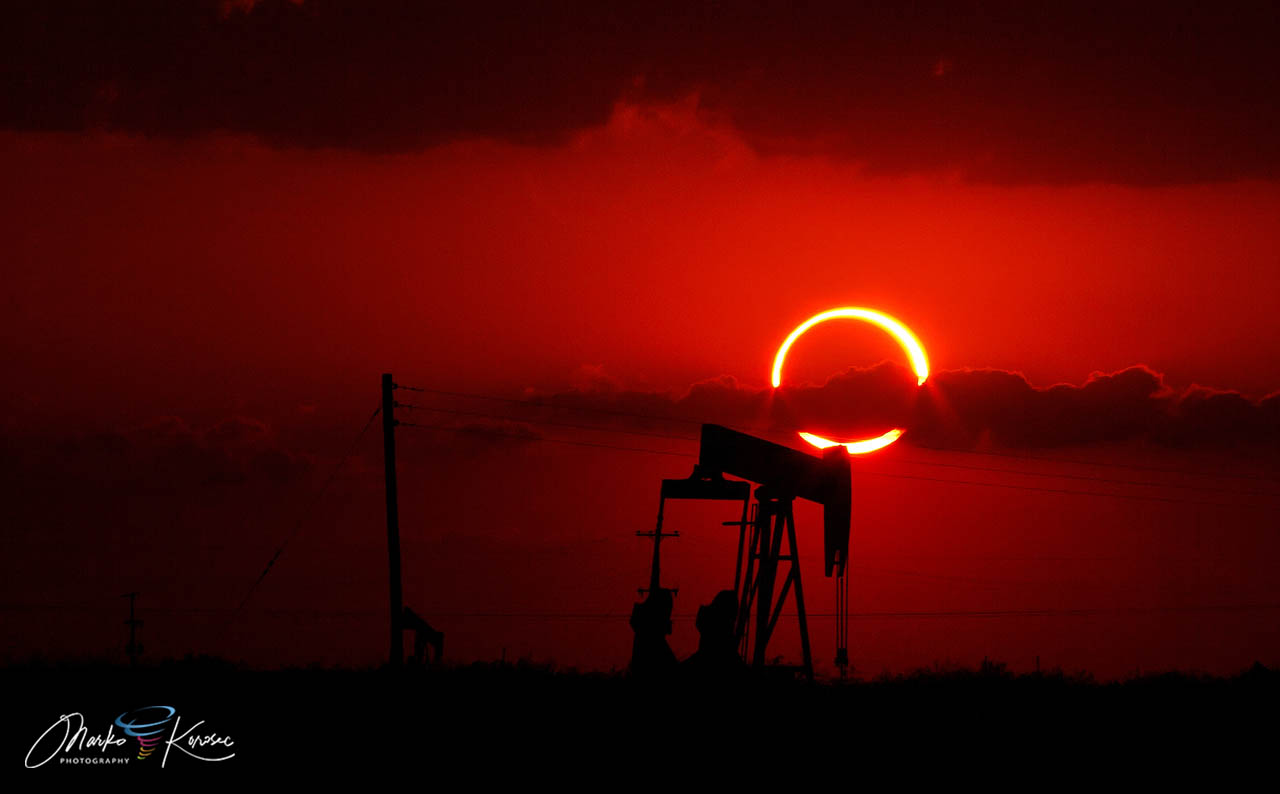 Above: A Ring Of Fire solar eclipse in Texas, May 20th, 2012. Photo by Marko Korosec

But for us living in this century, there is indeed nothing to worry about. We will be able to see quite a few more over the next years and decades.

BUT WHAT IS THE RING OF FIRE – AN ANNULAR SOLAR ECLIPSE?

As we could read above, the moon is traveling around the Earth in an elliptic orbit. If the alignment of the Sun, Moon, and Earth occurs when the moon is farthest away from the Earth’s surface, it does not cover the Sun’s disk completely. It appears smaller, so it is unable to entirely block the Sun.

This celestial event is known as a very dramatic Ring Of Fire – Annual Solar Eclipse. A stunning annulus – ring appears around the Moon. Since this is not a total eclipse, the edges of the Sun can still be visible around the Moon as a glowing halo.

The Annular eclipses are actually very similar to the total eclipses when the Moon, Earth, and Sun are aligned. In both events, the moon moves directly in front of the Sun as viewed from Earth.

But when the Ring Of Fire eclipse happens, a total eclipse does not happen as the Moon does not completely block out the visible disk of the Sun. When it travels farther away from Earth, we see a tiny ring or an annulus around the Moon.

While partial or annular eclipses are stunning to see, it is only during the brief moments (normally a matter of a few minutes) of a total eclipse that the sun disappears from the daytime sky. And the midday turns into dusk or early night. 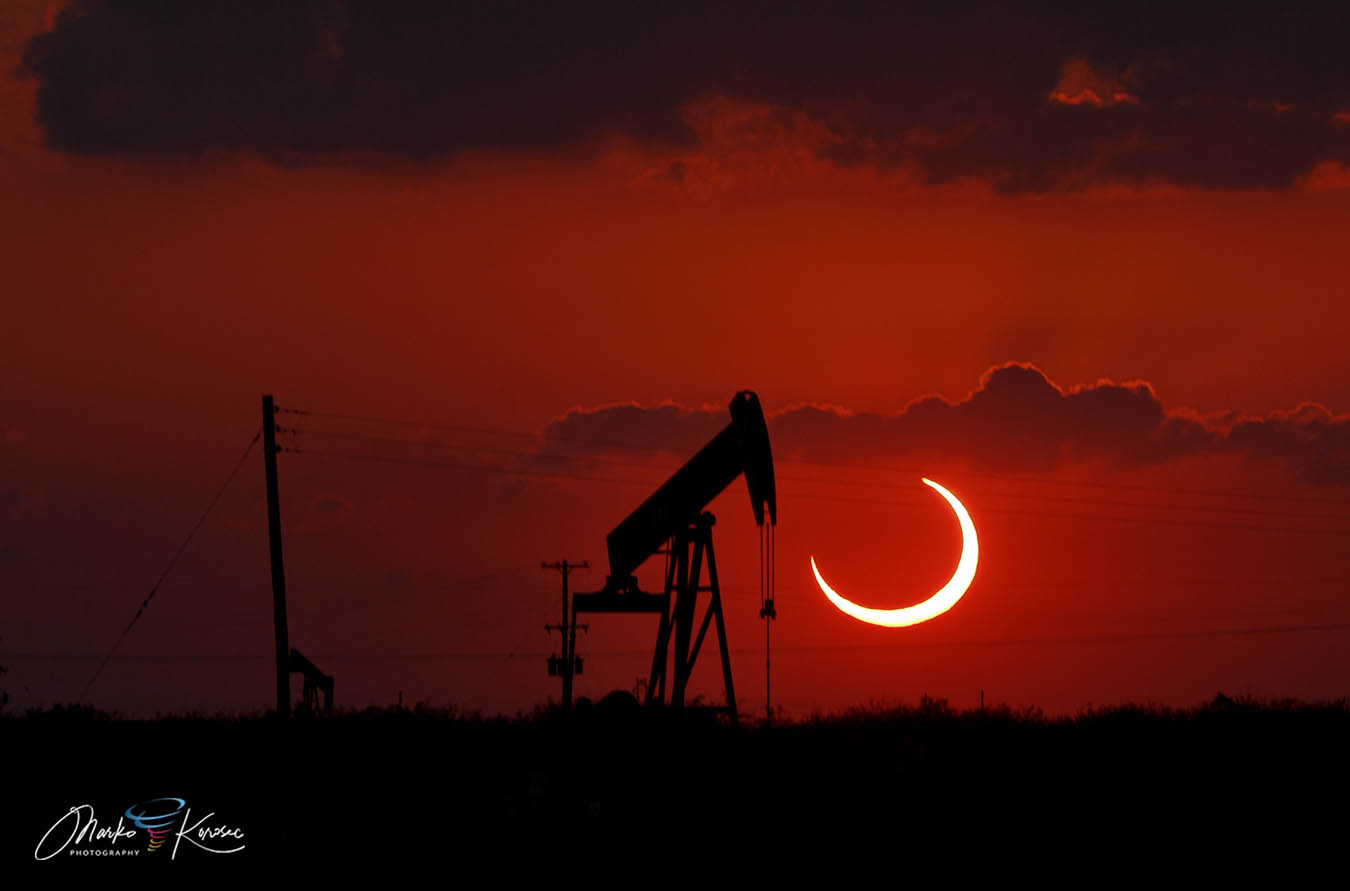 Above: Partial Solar Eclipse during sunset in Texas, May 20th, 2012. Photo by Marko Korosec

WHERE TO WATCH THE RING OF FIRE ECLIPSE 2021?

This time, the annular solar eclipse – Ring Of Fire – is viewable from parts of Canada, the Hudson Bay, Greenland, across the Polar Region including the North Pole, and parts of northeast Russia (Siberia). The full eclipse lasts about 1 hour and 40 minutes.

From any of these areas along the swath of annular solar eclipse, the annular Ring Of Fire stage of the eclipse lasts a maximum of 3 minutes and 51 seconds. 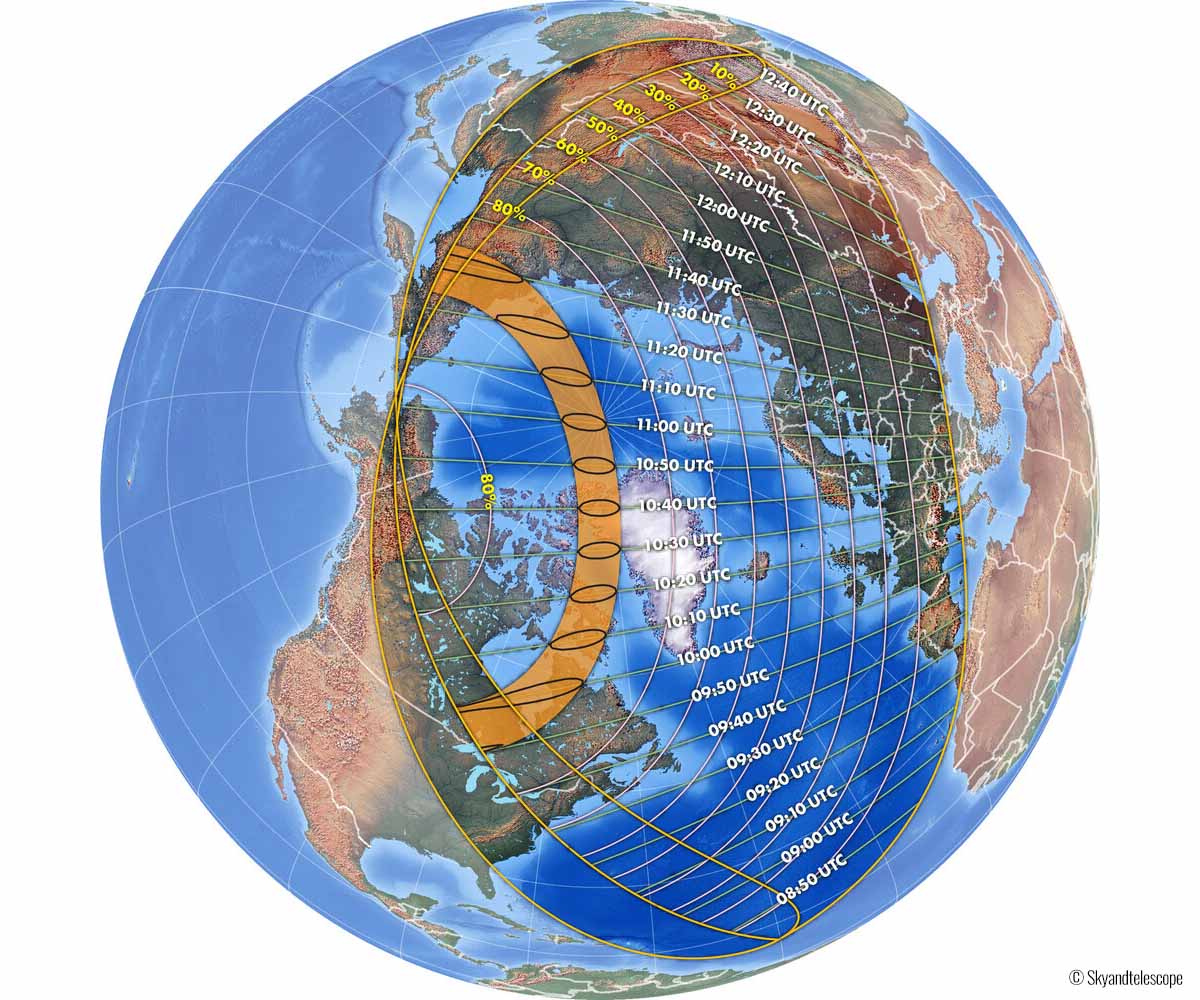 Skywatchers and stargazers in North America, the North Atlantic, a large part of Europe, Asia, and the Arctic will be able to observe the celestial event as a partial solar eclipse. The closer you are to the swath of totality, the larger part of the Sun’s disk will be covered by the Moon.

ECLIPSE AT SUNRISE IN NORTH AMERICA

Although not many could see the perfect Ring Of Fire this time, it will be quite a dramatic sunrise show over the Mid-Atlantic, the Great Lakes, and the Northeast United States.

A deeper eclipse will remain in view for about an hour after sunrise. For example from New York City, the eclipse magnitude will reach 80%, which means that the moon will cover 80 percent of the Sun’s disk. 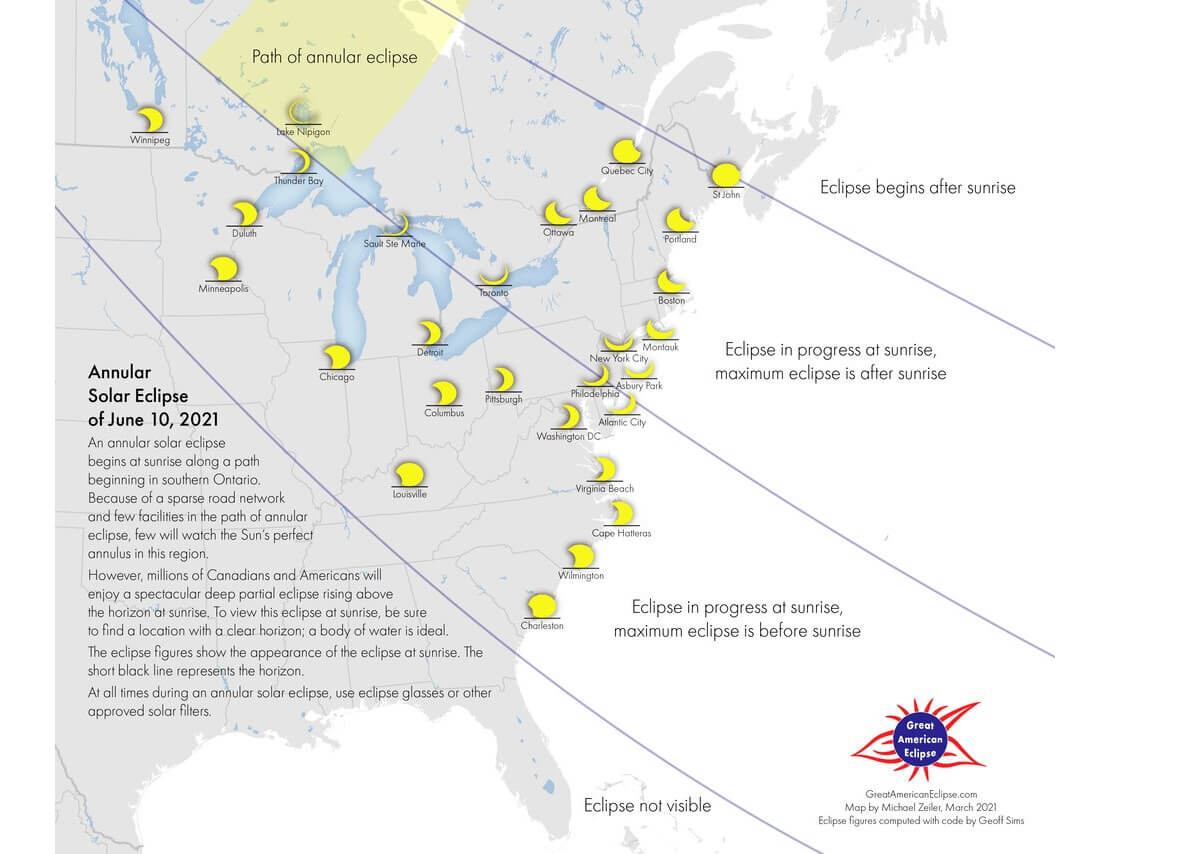 Above: Eclipse viewing area in the United States, June 10th, 2021

The eclipse will not be visible from the areas west of eastern South Dakota, central Iowa, southern Illinois, or central Georgia.

PARTIAL ECLIPSE ACROSS EUROPE AND ASIA

Most of Europe will be able to observe the partial eclipse from start to finish, as it will take place higher in the sky through the late morning into midday hours. The full eclipse will last for about 2 hours and a half across northern Europe, and only about a good hour in central Europe.

The farther north you live in Europe, the deep the partial eclipse will be. Tromso, Norway will have 51% of the Sun covered, while Oslo will have it 30% covered. Glasgow, Scotland will experience 32% coverage. And Thorshavn, Faroe Islands about 46%.

The biggest part of the Sun’s disk obscured by the Moon will be over Iceland. The capital Reykjavik will have it 60.5% covered, so almost two-thirds. 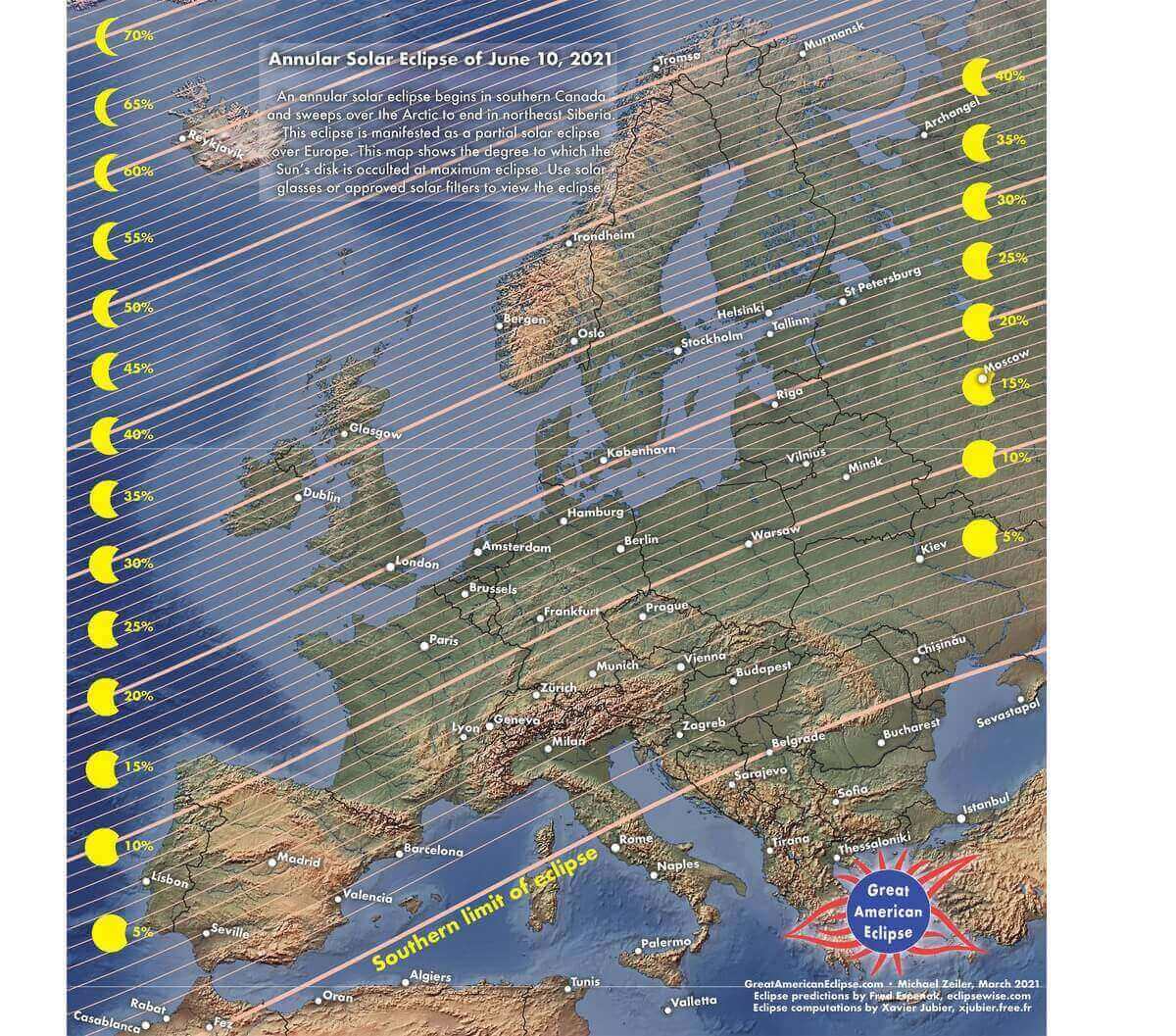 For instance, Venice (Italy) will only see about 2.2% of the Sun covered. Madrid, Spain will see a 5% coverage, Warsaw, Poland about 10% of the eclipse, similar in Frankfurt, Germany. The eclipse will not be visible across the southern Mediterranean, southern Balkan peninsula, and Turkey.

A partial solar eclipse will also be visible from Asia through the mid to late afternoon on June 10th. Most of Siberia (Russia) will experience 50-90% of the Sun’s disk covered. The swath of total, however, spreads across the far northeast Siberia during sunset time. 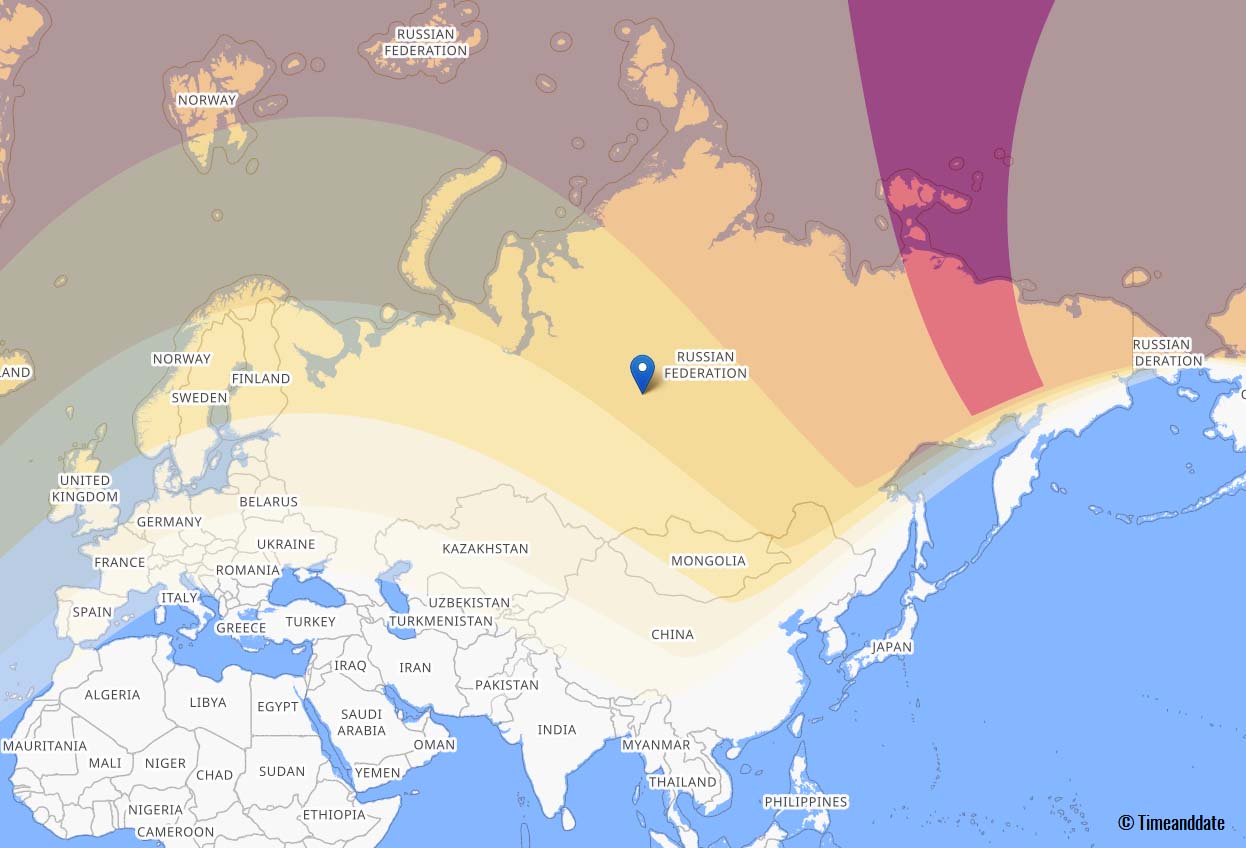 For example in Beijing, China, the Moon will eclipse the Sun about 12 minutes before sunset, so the celestial show will be rather of a short breathe there. And the maximum eclipse magnitude will only be about 8% when the Sun goes down.

HOW TO OBSERVE SOLAR ECLIPSE SAFELY

If you live in the part of this year’s eclipse, buy solar glasses or solar filters to place on the end of the lens if you plan to photograph the eclipse.

Always, ALWAYS, use solar filters when observing the Sun. No matter it is a normal day, partial, annular, or total solar eclipse. The solar filters must not have any scratches, punctures, torn, or otherwise damage. If you find those, discard them and buy a new one. No exception.

If observing the eclipse with your children, always supervise them while using solar filters. A wrong moment could damage the eyes permanently.

If you normally wear glasses, put your eclipse glasses on over them, or hold your handheld filter in front of them. 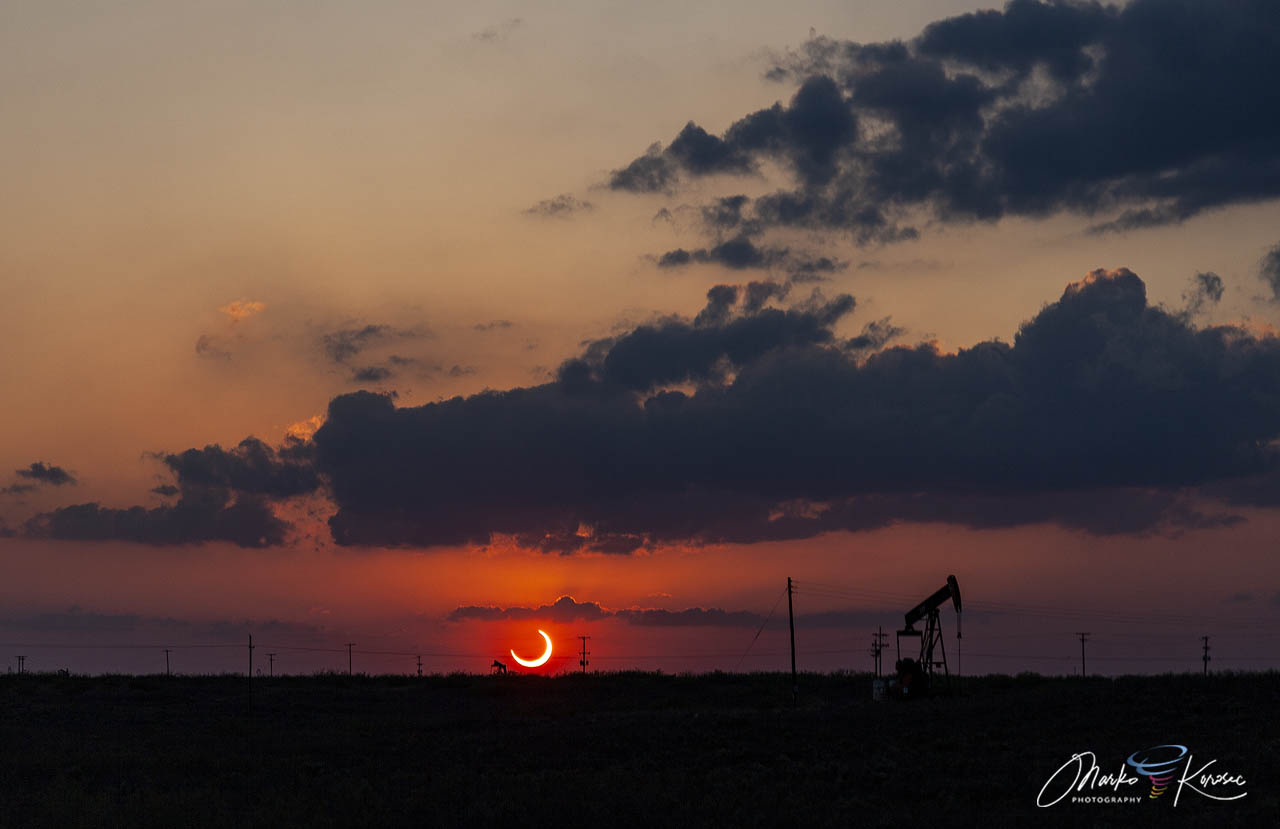 Above: Partial Solar Eclipse in Texas, May 20th, 2012. Photo by Marko Korosec

Also, do not look at the uneclipsed or partially eclipsed sun through an unfiltered camera, telescope, binoculars, or another optical device. And do not look at the sun through a camera, a telescope, binoculars, or any other optical device while using your eclipse glasses or handheld solar viewer. The concentrated solar rays could damage the filter and could cause serious injury to your eyes.

If you do not feel confident enough, ask for some advice from an astronomer before using a solar filter with a camera, telescope, or binoculars. The solar filters must be attached to the front of any telescope, or camera lens.