Hurricane Laura is now undergoing a rapid intensification, devastating landfall is expected along the Gulf Coast. The maximum sustained winds have increased to 90 knots (105 mph) this morning, Aug 26th. The central pressure has dropped to near 980 mbar. The estimated intensity is based on the recent NOAA Hurricane Hunters flight into Laura, indicating a solid intensification.

National Hurricane Center is forecasting Laura to peak at around 105 knots (120 mph = 195 km/h) of maximum sustained winds. What is particularly concerning is the peak intensity expected in the final hours prior to landfall. Damage could be catastrophic. 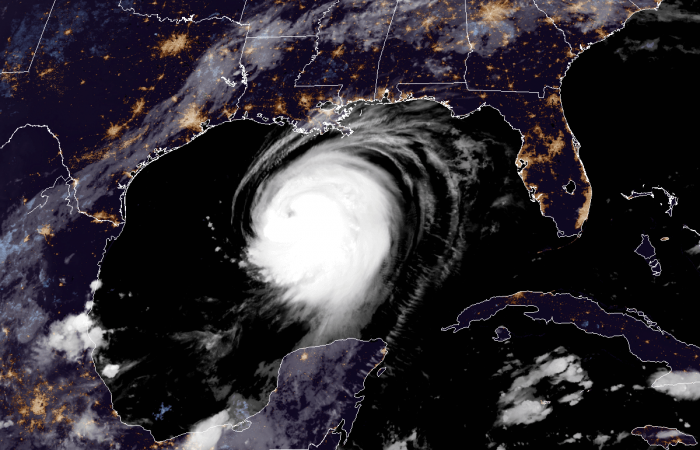 Geocolor satellite image. Graphics: NOAA CIRA
NOAA Hurricane Hunters are scanning Laura with several aircraft over the past days. Lately, near 980 mbar has been measured in the center. Laura continues rapidly deepening. 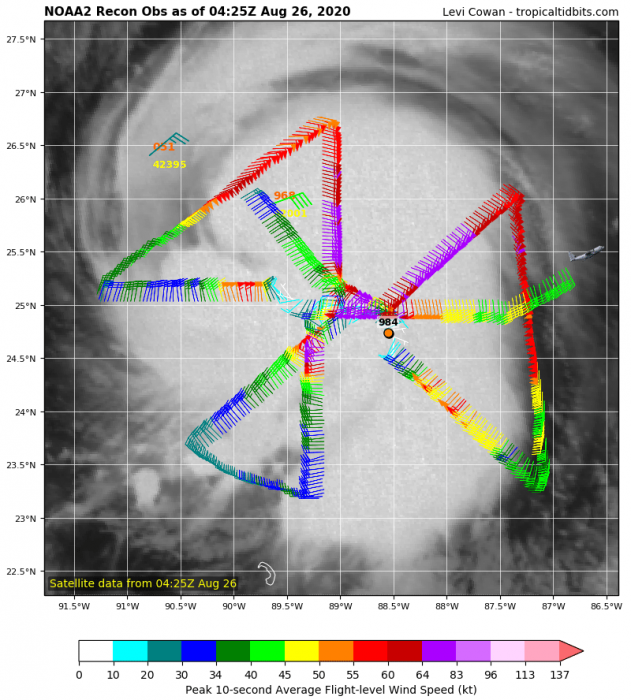 The strengthening is also very well-visible with the satellite imagery. Laura’s cloud pattern is becoming better-organized with a banding feature over the eastern half of the system. The central dense overcast (COD) with cloud tops even below -80 °C. The upper-level outflow ventilation is impressive, improving also over the northwestern quadrant. 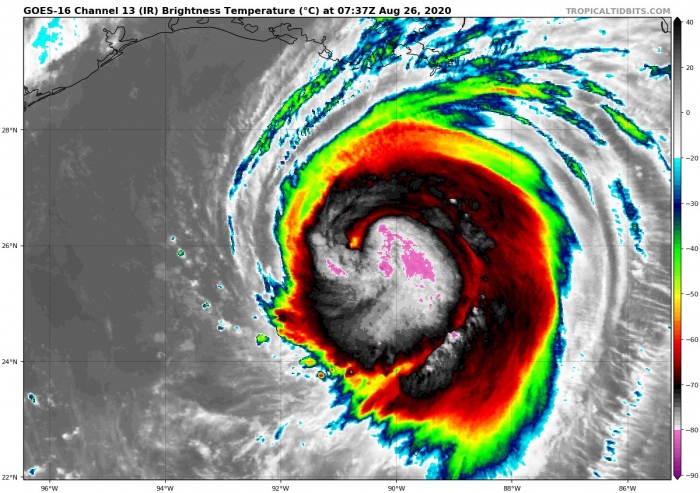 The sea temperatures of the Gulf are extremely warm this year. Attached is the high-resolution map of the upper-levels of the water. We can see the western portions of the Gulf have 31-32 °C. That is around 2 degrees Celsius higher than normal. Such sea temperatures are a healthy fuel for explosive storms.

Notice also slightly cooler water to the east – those are mixed layers in the wake of hurricane Marco. 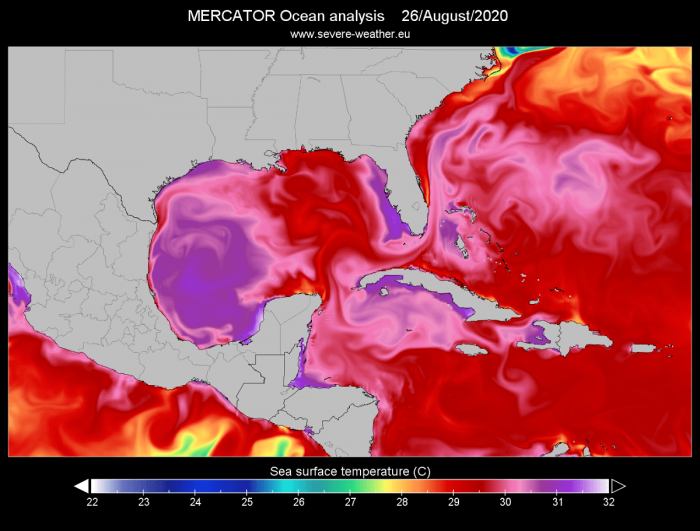 Hurricane Laura is now curving slightly more towards the northwest and is expected to reach a major hurricane strength today. It remains increasingly likely that Laura will make landfall as a powerful, strong Category 3 hurricane. The latest NHC track is hinting the landfall could be very near the state border of Louisiana and Texas. South of Beaumont and Lake Charles. 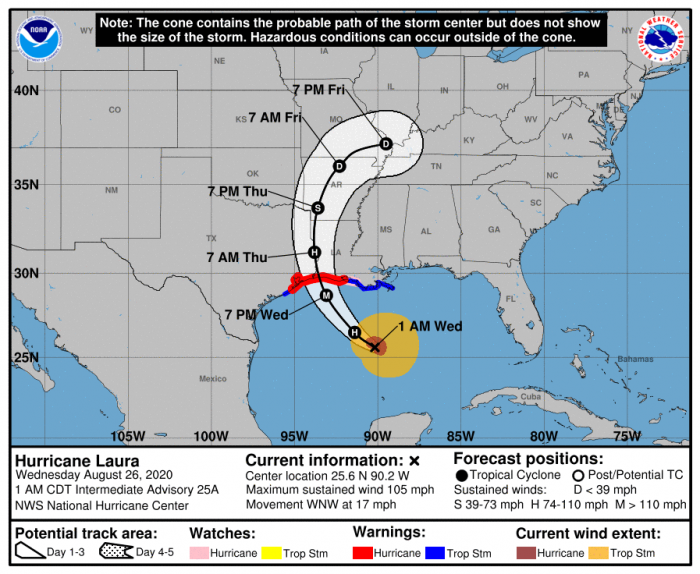 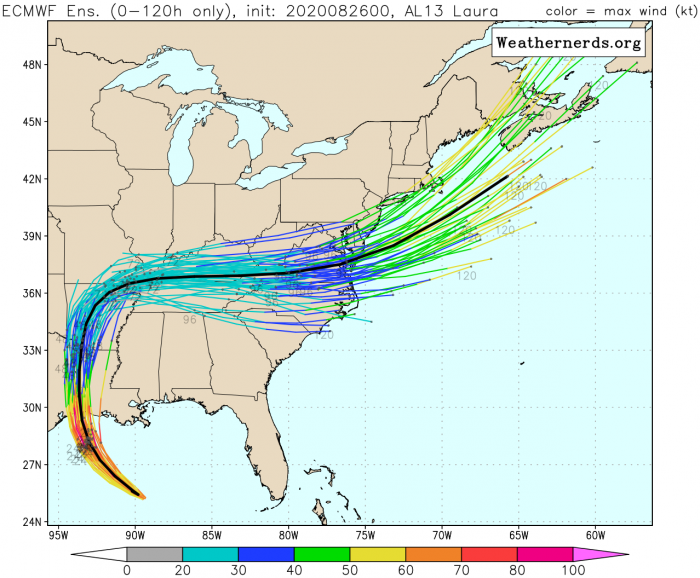 After the landfall, Laura is expected to weaken while traveling north and then east across the United States. Models are hinting a potential re-intensification after the system ejects the East coast next week. An intense extratropical storm seems possible along the northeast US and northwestern Atlantic. 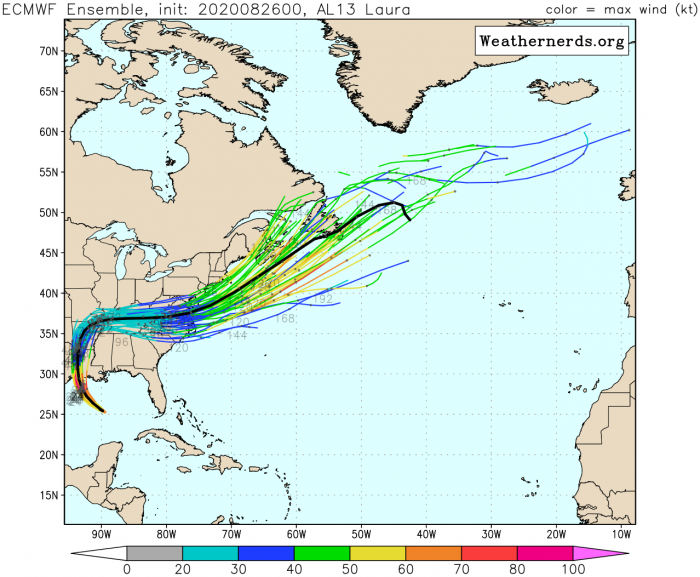 Very high-resolution models, e.g. HRRR, are now picking up Laura. The simulated IR brightness temperatures (read as infrared satellite image) indicate Laura will be a very large and powerful system later today and tonight. The large eye is expected, surrounded by violent winds in the eyewall. 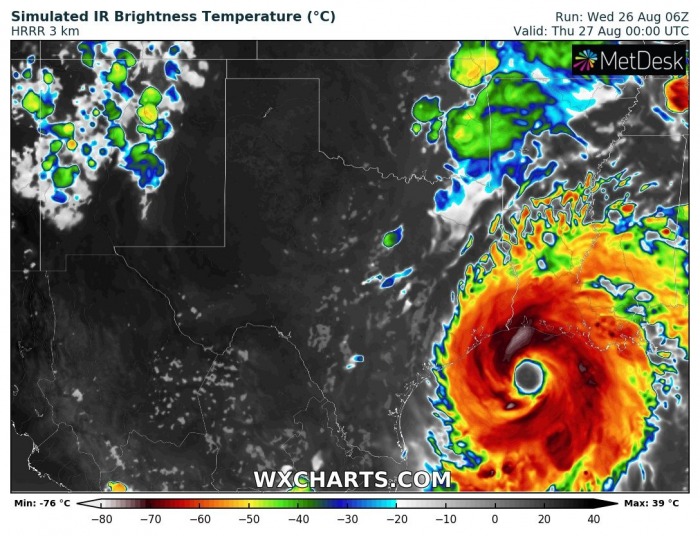 Destructive hurricane-force winds are expected through Wednesday night from San Luis Pass, Texas, to west of Morgan City, Louisiana. The strongest winds associated with Laura’s eyewall will occur somewhere within this area. 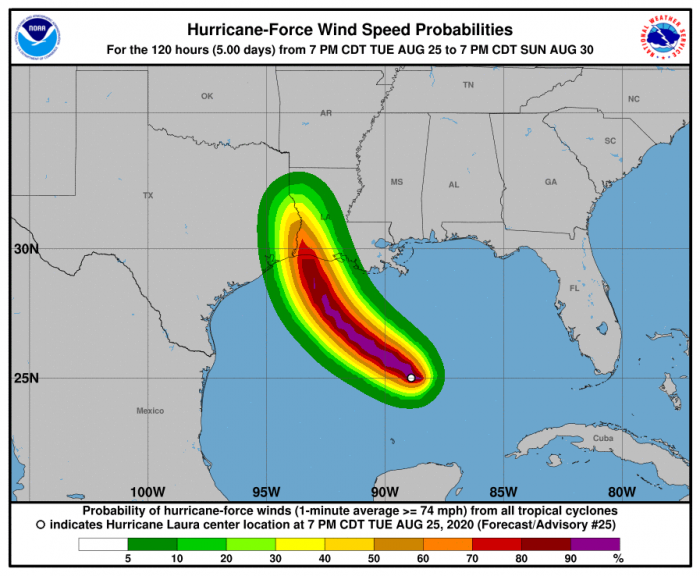 Laura will likely weaken quite rapidly after the landfall. However, dangerous hurricane-force winds and flooding are still expected to spread well inland over extreme western Louisiana and eastern Texas on Thursday morning.

Based on the NOAA NHC forecasters, “There is a danger of life-threatening storm surge with large and dangerous waves producing potentially catastrophic damage from San Luis Pass, Texas, to the Mouth of the Mississippi River, including areas inside the Port Arthur Hurricane Flood Protection system. This surge could penetrate up to 30 miles inland from the immediate coastline in southwestern Louisiana and far southeastern Texas.” 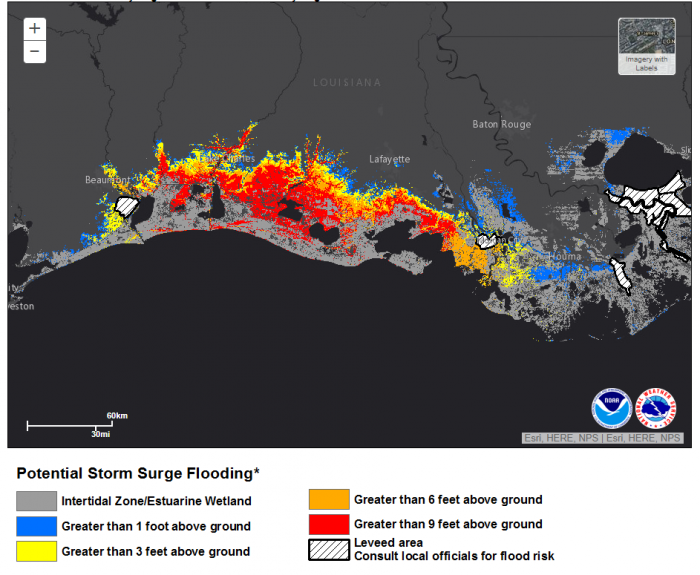 A significant rainfall threat will develop along the track of hurricane Laura during and after the landfall. Locally 10 to 15 inches (250-400 mm) is expected, possibly even more. Rainfall and therefore flooding potential will also be a concern along Laura’s track further north across western Louisiana, eastern Texas, and Arkansas.

Stay tuned for further updates as Major hurricane strength emerges. And stay alert for extremely dangerous, life-threatening conditions developing on Wednesday. If you live along the Gulf Coast, be hurricane prepared!