Here is a recap post of the extremely powerful Category 5 Tropical Cyclone #Harold over Vanuatu. The system has peaked at 165 mph (145 knots) and 912 mbar at 12 UTC today, Apr 6th. One-third of Vanuatu population has been affected, severe wind damage and flooding has been reported. Harold’s behavior now indicates that the inner eyewall is collapsing due to the system’s interaction with the islands to its west. While it remains in extremely favorable very hot sea waters, Harold may organize an eyewall again before it heads towards the Fiji archipelago and Tonga.

The latest satellite imagery is indicating Harold is losing its strength, the eyewall is collapsing which is perfectly visible as it has a trochoidal wobbling. The CDO (Central Dense Overcast) is getting warmer, indicating the system is undergoing a land-induced EWRC (Harold’s main inflow region is feeding from the west, passing through the islands and across the cold wake of the cyclone): 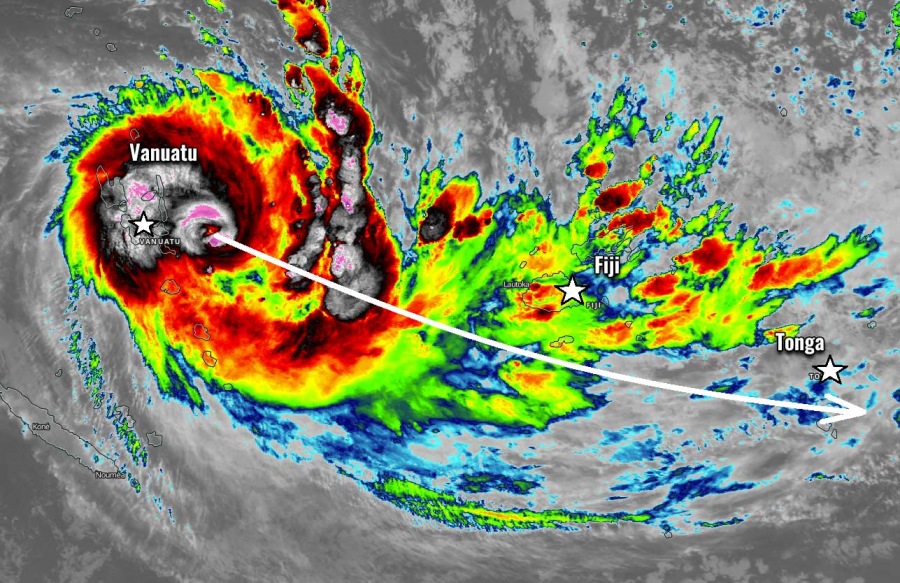 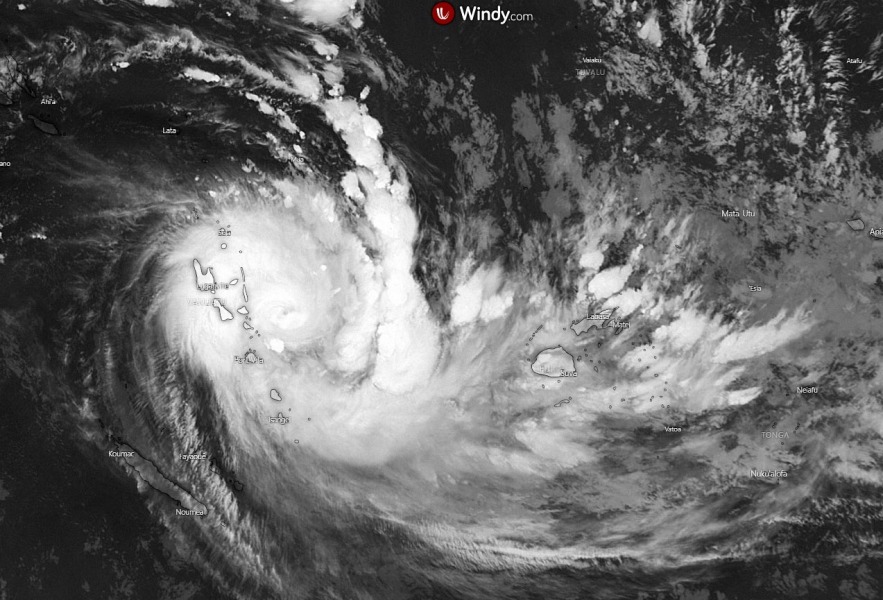 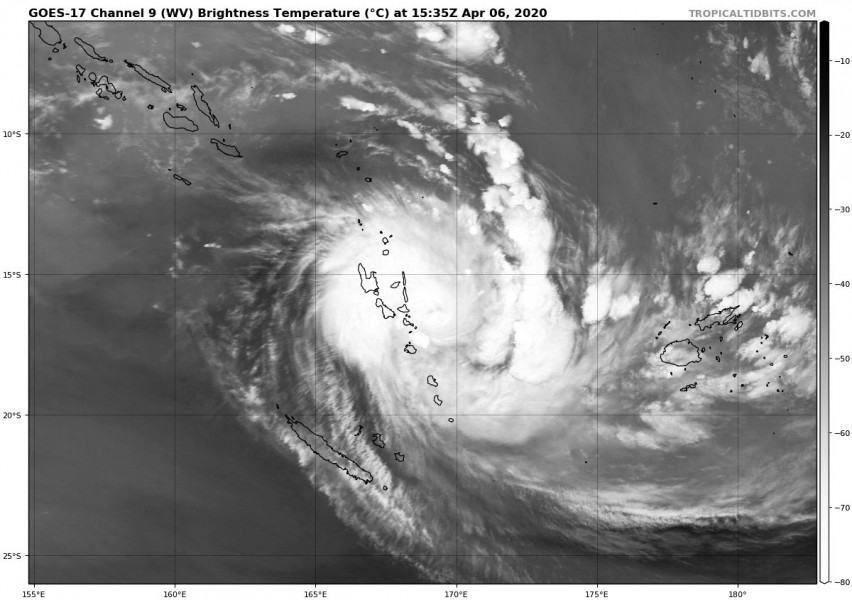 Satellite imagery is showing trochoidal wobbling, also a lopsided and warming CDO which indicates that #Harold is undergoing a land-induced EWRC. After said cycle finishes, the intensity may level off and gradually decrease. This storm is truly amazing! #CycloneHarold pic.twitter.com/C5KVZosPvV

3 phases of Severe Tropical Cyclone #Harold — it rapidly intensified, re-intensified, and then did so again, each unfortunately finishing stronger than the previous (and an eerie face in the eye at the end of the second phase when approaching #Vanuatu) pic.twitter.com/BTh2KkcSrv

Stunning view at the first and the final light today – a spectacular stadium effect is seen on the western eyewall while Harold was just about to make landfall on Espiritu Santo island (upper image). And a very similar effect on the final light as well – we can also see the hub cloud in the eye. 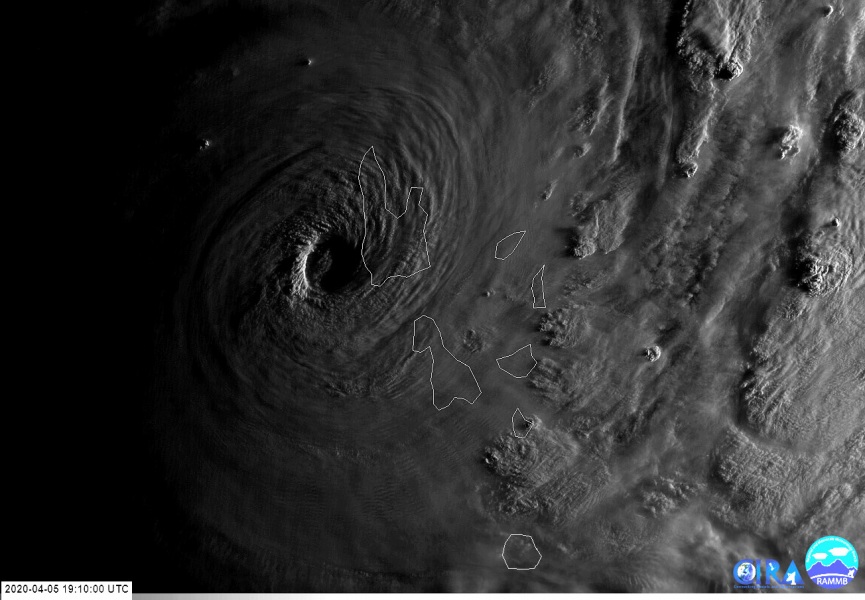 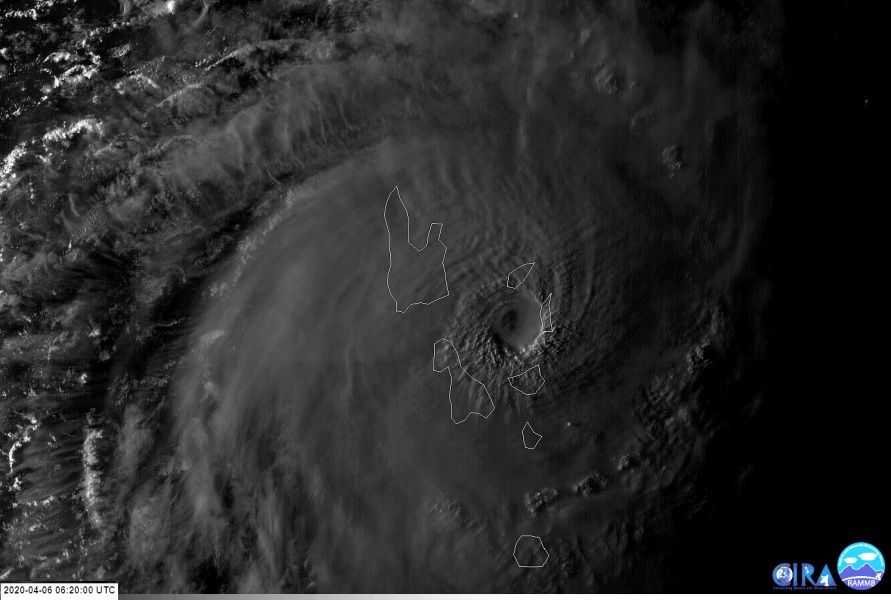 Harold has peaked around 12 UTC today, Apr 6th. As it can be seen on the Advanced Dvorak Technique (ADT) analysis, the raw T numbers are going down due to the EWRC and likely eyewall collapsing.

Vanuatu has a population of around 300.000 people, one-third of those have been affected by Harold. The relatively slow-moving system made a significant and locally destructive wind and flooding damage. Here are some reports of wind destruction – collapsed buildings from the main street of Luganville on Espiritu Santo island. The second image indicates rough seas pushing the ship ashore:

#CycloneHarold #Vanuatu #TCHarold #Santo First images coming in from main street of #Luganville on Espiritu Santo island which is experiencing the full force of Harold. pic.twitter.com/ltcVijAyxZ

#CycloneHarold #TCHarold #Vanuatu Dangerous seas this morning a precursor to the arrival of Harold on #EkenIsland . Credit Ryry Titus pic.twitter.com/62p6pidbCr

Harold’s future track remains on previous thinking and should be moving southeast while gradually weakening, but will remain a very powerful tropical system. It is likely it will remain a Category 4 while passing near southern Fiji archipelago on Wednesday and Tonga 23-48 hours later. The deep-layer shear will remain very low for two more days, while the system remains in a still very favorable ocean heat (see the attached OHC map). This should support further deep convective activity and Harold’s severe intensity, nevertheless.

NOAA's database only has four other Cat. 5 TC's near northern #Vanuatu since 1988, the last one being Pam five years ago. pic.twitter.com/OBvoarFMNN