Here is a short morning update on the very dynamic pattern over the North Atlantic today; we have a decaying deep cyclone, passing over the UK and Ireland while an explosive cyclogenesis is underway further west – an exceptional rate of rapid intensification is seen, pressure drop was 46 mbar since yesterday morning! Both systems are creating a pretty impressive satellite presentation, we are facing two cyclones side by side – twins. The rapidly developing cyclone will result in extremely deep central pressure tonight, violent hurricane-force winds and monster 15-18 meter waves!

Today’s 06 UTC surface analysis, Feb 13th, reveals the two cyclones over the North Atlantic. They were connected to each other with the surface front in between. The western system maintains the extremely rapid intensification with a central pressure already at 950 mbar, located northeast of the Newfoundland. It is expected to deepen for another 25 mbar until Thursday morning (06 UTC, Feb 14th), likely sliding below 935 mbar! The eastern cyclone over the UK and Ireland is gradually weakening, moving east. Below are the past 36 hours analysis data in 6-hour intervals. 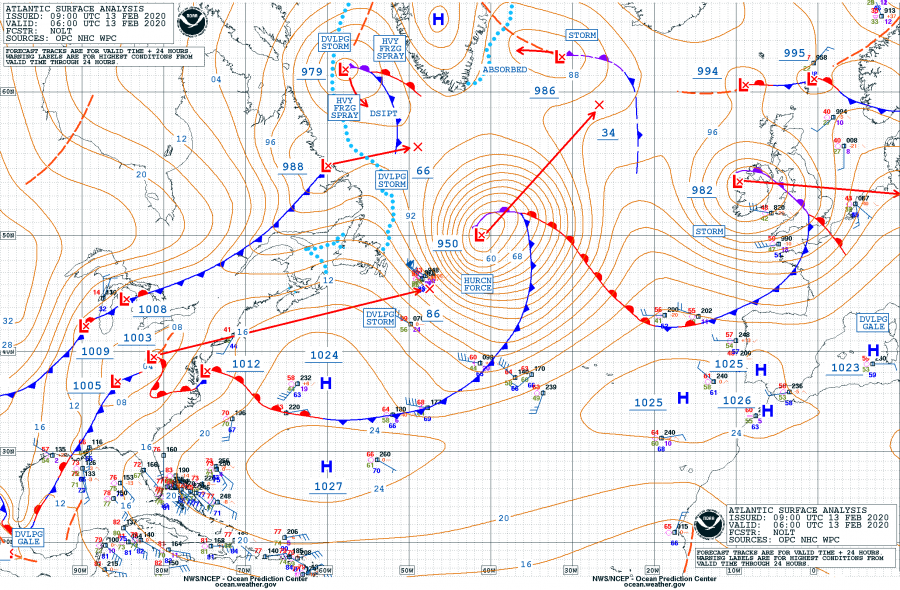 Cyclone #1 – the western system over the Northwest Atlantic. We can see the pressure falls are even faster now, with an incredible 43 mbar change during the past 24 hours (00-00 UTC interval)!

Cyclone #2 – the eastern system moving across the UK and Ireland. Its pressure is gradually rising as cyclone is weakening while moving east.

Attached are satellite images in various channels – notice the textbook structure of the rapidly intensifying cyclone on the left, with well-defined dry conveyor belt (dry intrusion) wrapping into the core. While the system over western Europe looks like a ‘donut’ on water vapor imagery. the dry belt (dark band) almost completely closed off the cyclone’s core. 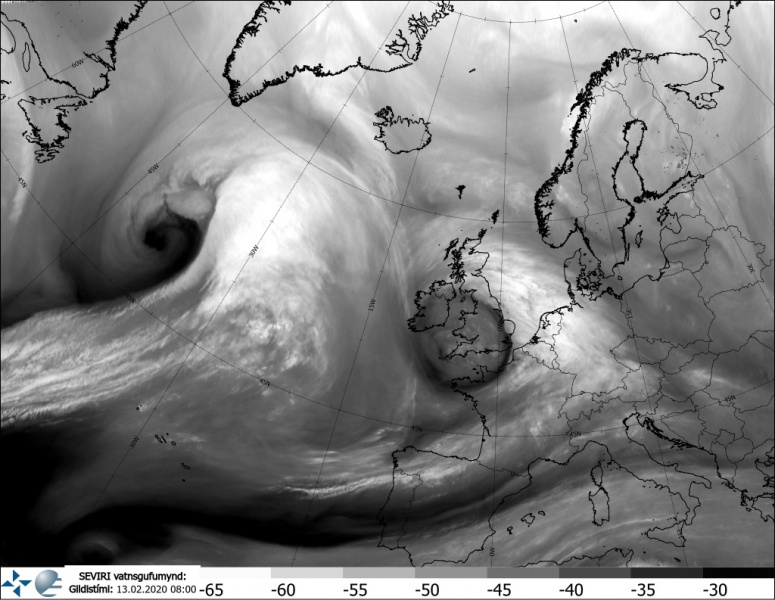 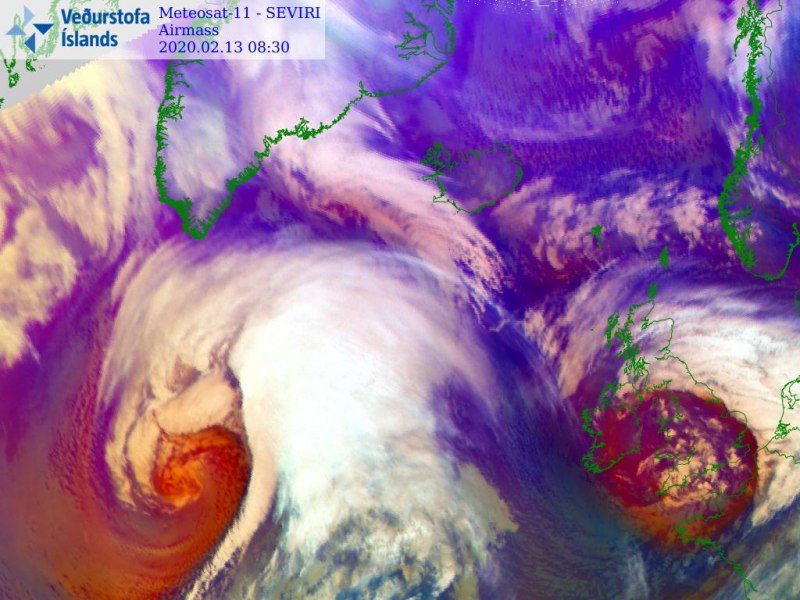 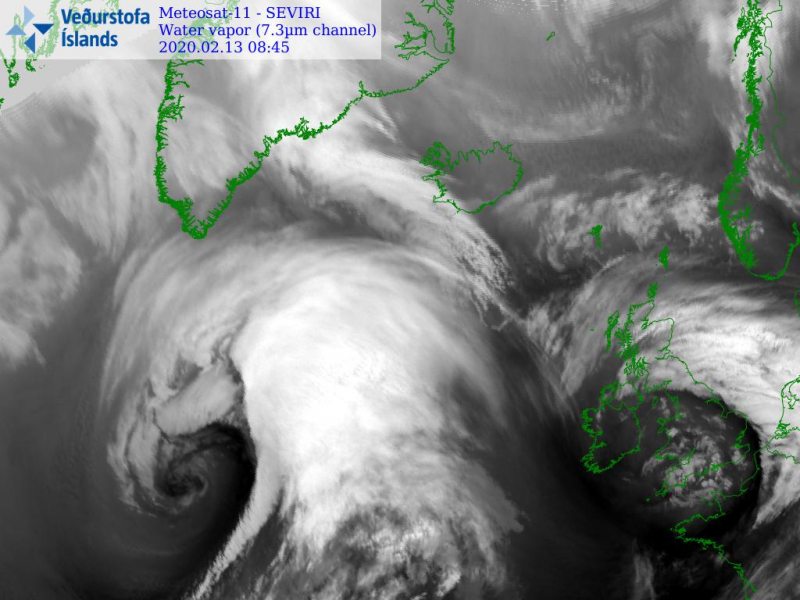 Close-up with of the western cylcone through the airmass satellite channel: 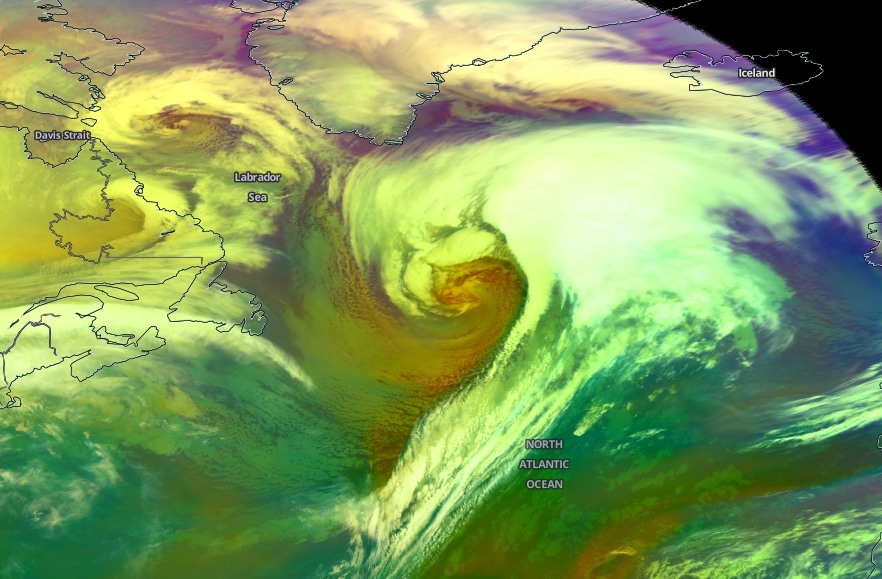 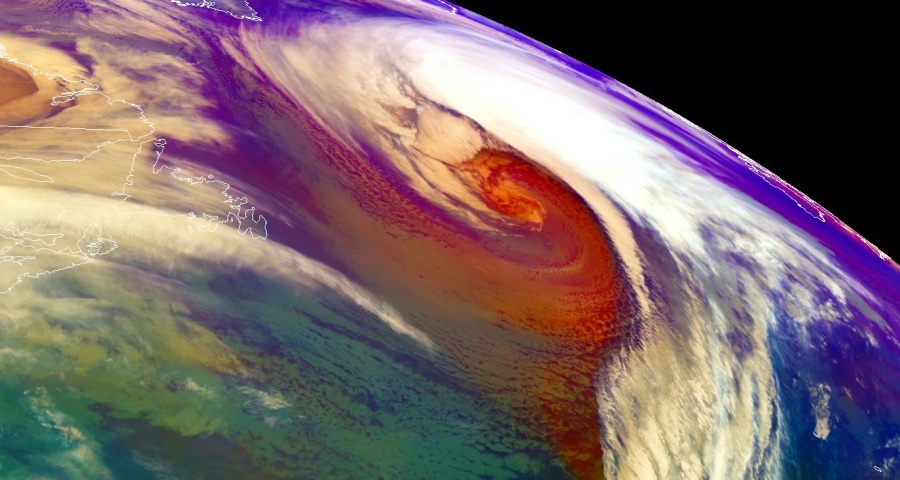 The future behavior of the system is more or less on track with the previous thinking, the cyclone over UK & Ireland will weaken today while the explosive development of the bomb cyclone will continue for another 12-18 hours, resulting in violent hurricane-force windstorm over the North Atlantic. See the primary forecast discussion:

See also – previous update on the explosive cyclogenesis across the Northwest Atlantic: