Yes, you’ve read it right. No overhype or impossible feature. After seeing so many impressive deep cyclones / extra-tropical systems this winter (on both North Pacific and North Atlantic), there is a room for more! Correlated with the ongoing North Atlantic Oscillation and Arctic Oscillation near-record values, the weather is going into extremes! What we are seeing on the weather models through the remainder of this week is beyond exceptional – an incredibly large, extremely deep and violent systems, with central pressure potentially even shooting towards the lowest pressure readings ever observed, will be possible in the North Atlantic, 915-920 mbar (Saturday’s windstorm/cyclone #Dennis we will talk about a bit later). First, while there is currently deep cyclone moving into UK and Ireland tonight, a new one is already forming near Newfoundland – it is expected to extremely rapidly deepen from 980 to 930 mbar in the next 36 hours. A proper so-called explosive cyclogenesis – bombogenesis – a ‘bomb’ cyclone. It will become a dominant feature for the North Atlantic tomorrow. Violent broad wind field with hurricane-force winds and 50-60 ft (15-18 meters) are expected!

This morning, Feb 12th 06 UTC, surface pressure and fronts analysis over the North Atlantic revealed an already rapidly intensifying frontal system, centered south of Newfoundland. The central pressure was 996 mbar, it is expected to deepen to around 950 mbar until Thursday morning (approx. 45 mbar in 24 hours period). Then, it continues further northeast and deepens for another 20 mbar until the evening hours, into 930-935 mbar range. That’d be near 65 mbar pressure drop in 36 hours period! 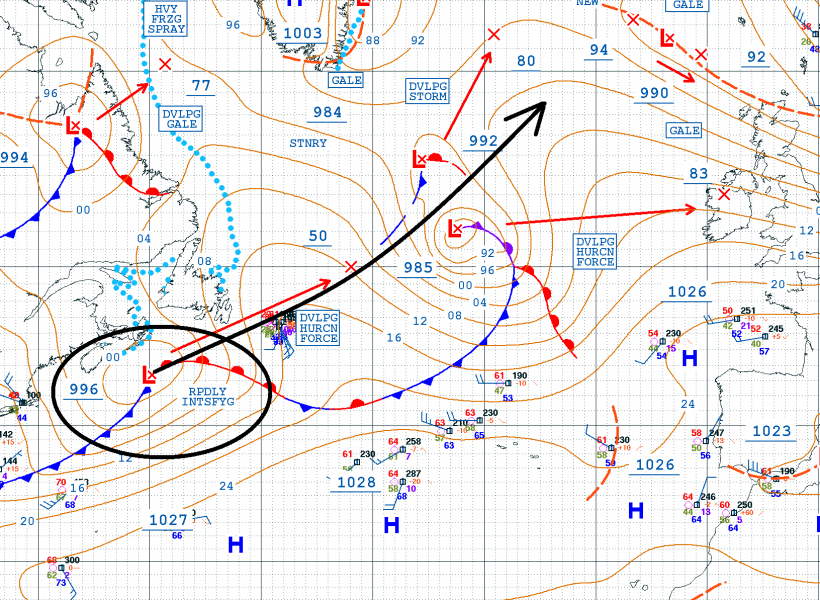 Visible satellite image across the North Atlantic reveals an interesting picture, two frontal systems to grab our attention. The ongoing mature deep cyclone moving towards western Europe, while there is a much larger and deepening cyclone forming in the Northwest Atlantic, exploding beneath a deep upper wave ejecting eastern Canada. This system is soon taking a so-called ‘bombogenesis’ (‘bomb’ cyclone) phase, taking the extremely rapid intensification of its wind field and pressure falls. While bomb cyclones mean one needs 24 mbar pressure drop in 24 hours period, our featured system will likely be deepening for more than 40-50 mbar per 24-hour period after this afternoon. 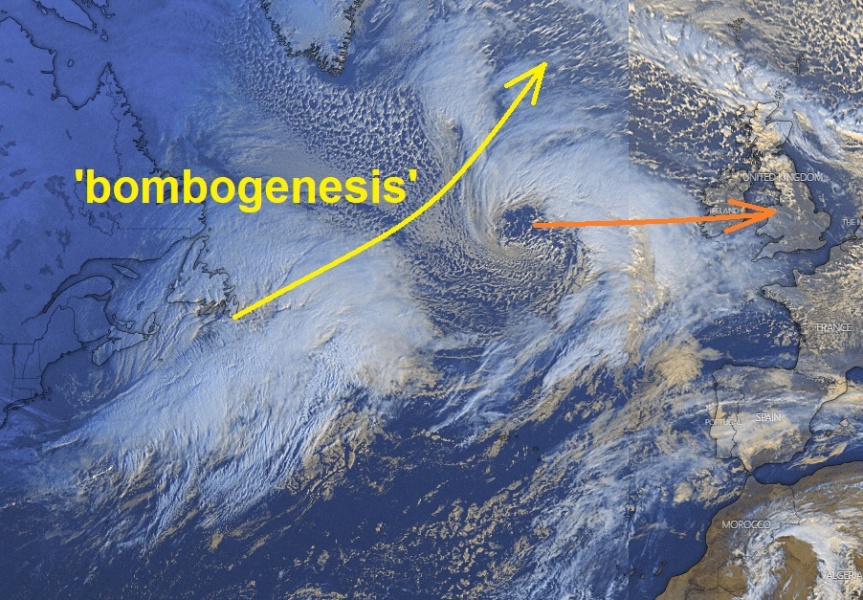 The wave ejecting from eastern Canada will be responsible for rapid surface cyclogenesis from the Northwest into North Atlantic, as it significantly deepens soon after entering the Atlantic ocean. The upper wave will become extremely deep on Friday. The associated surface low will produce violent, hurricane-force winds with likely peak gusts above 200 km/h. Models are hinting a sting-jet. 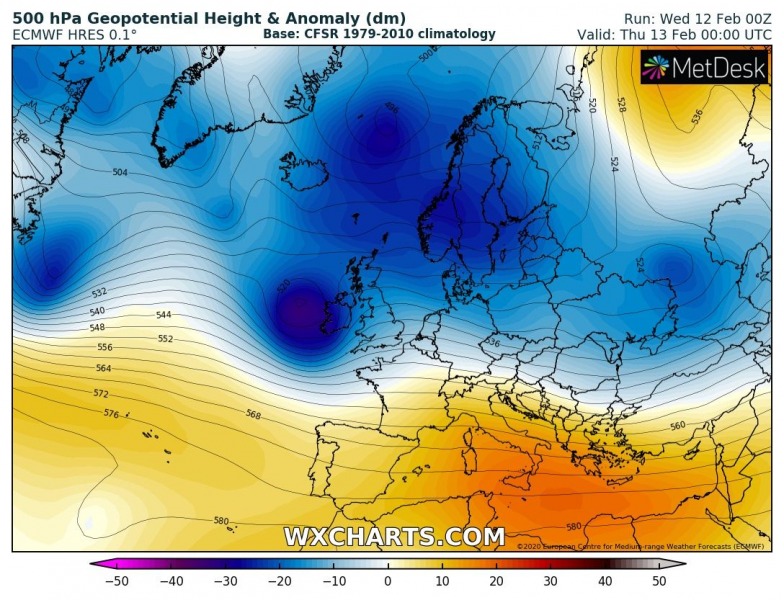 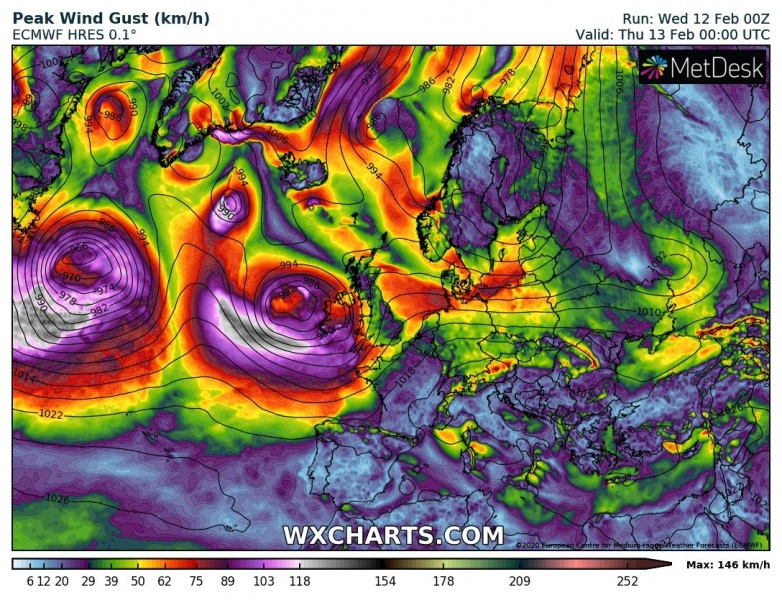 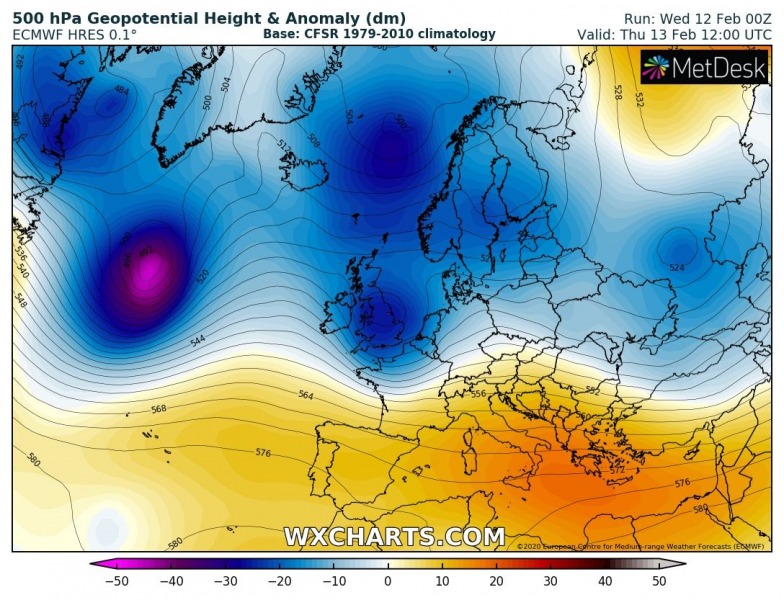 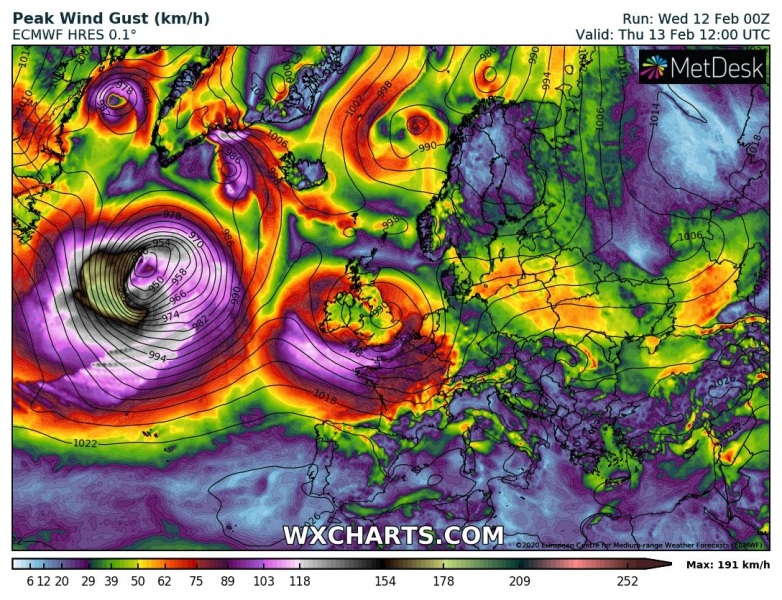 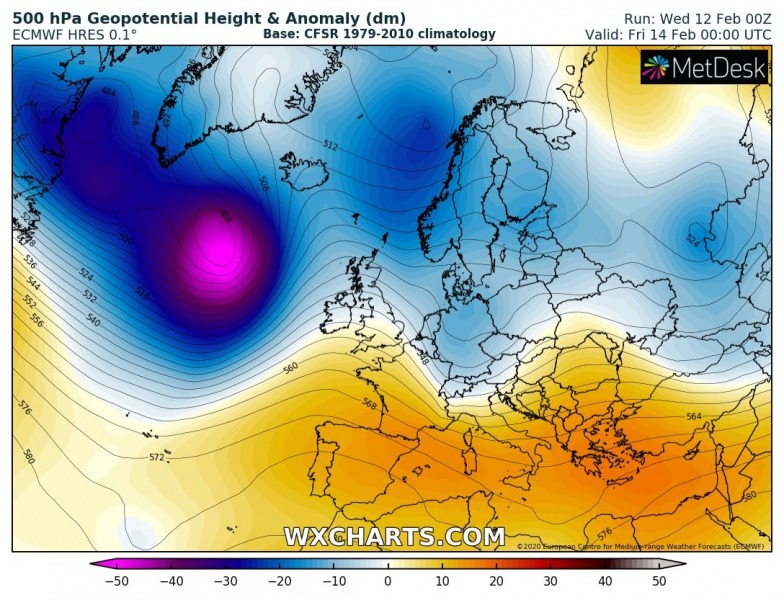 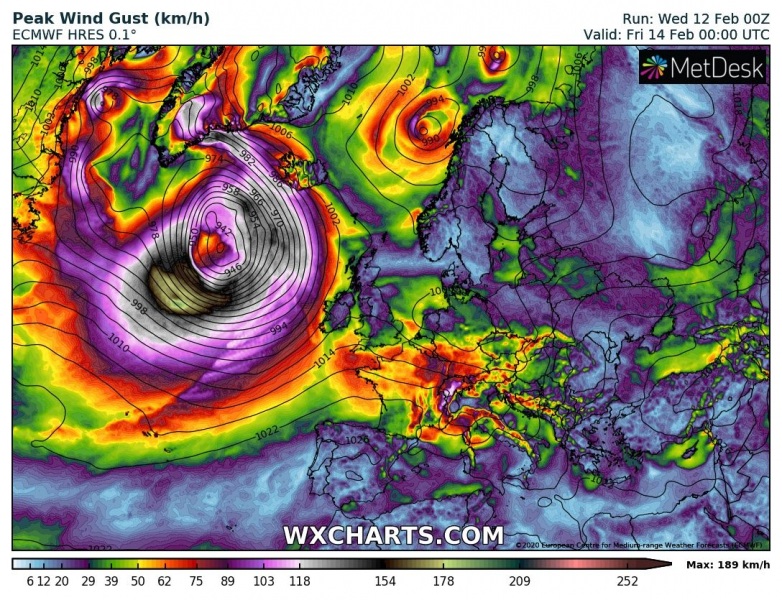 Here are the GFS model simulated IR satellite maps, indicating the system will be remarkably large and organized. We will likely see an exceptional satellite presentation from Thursday afternoon to Friday morning! Notice there will also be another deep cyclone, centered over the Labrador Sea. 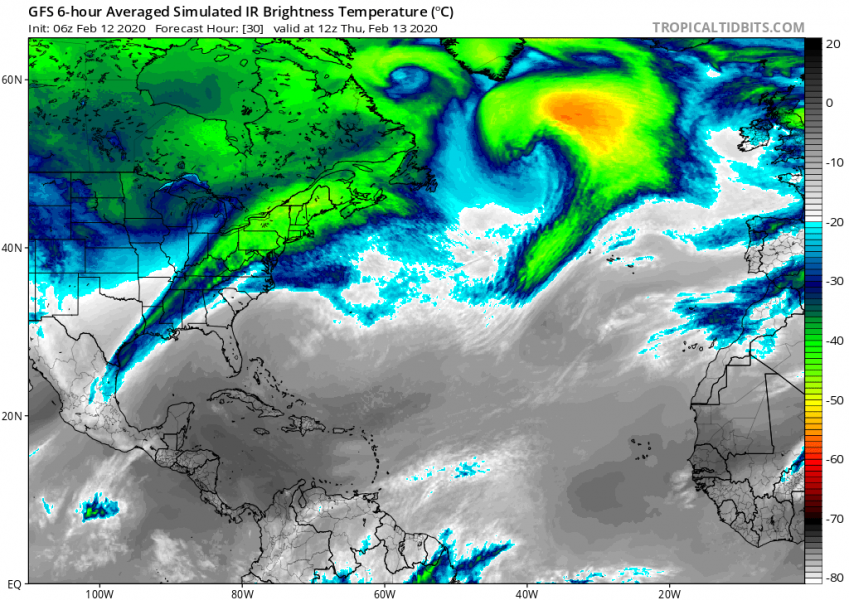 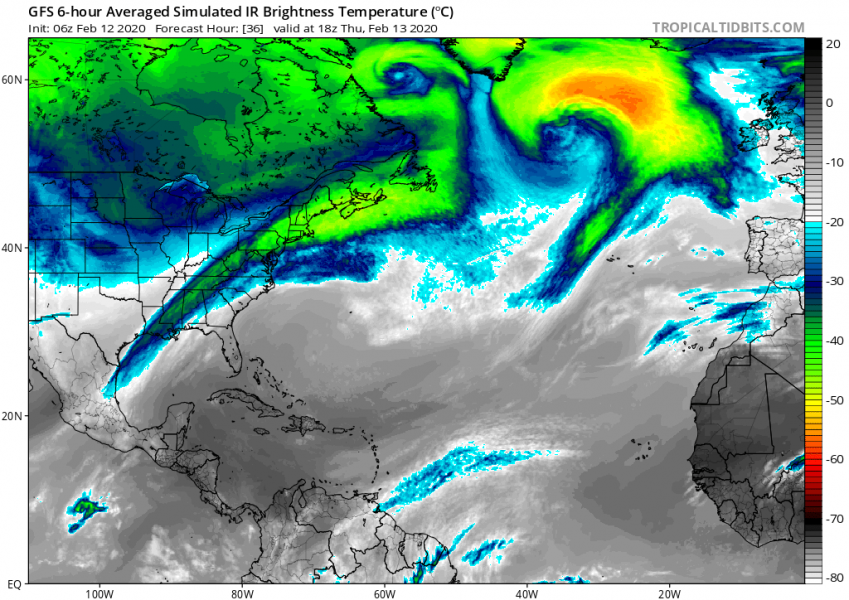 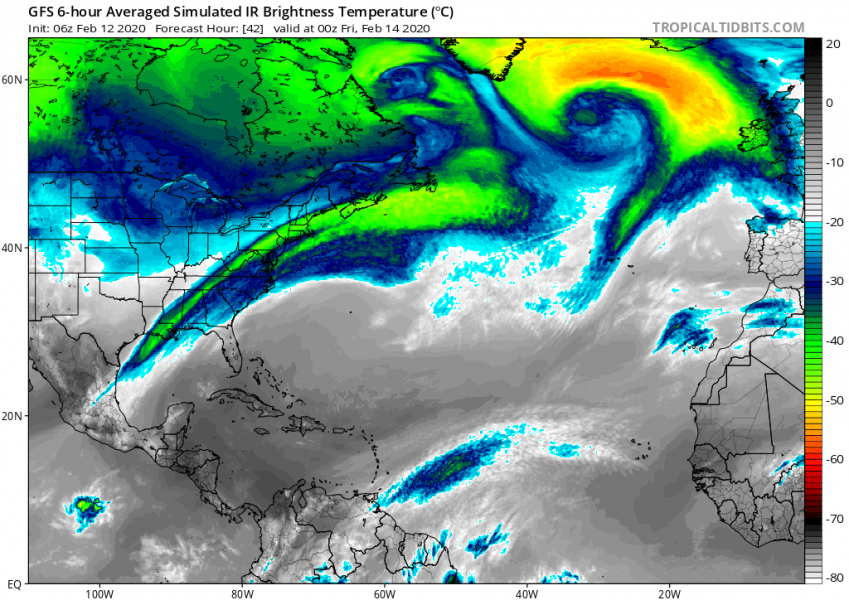 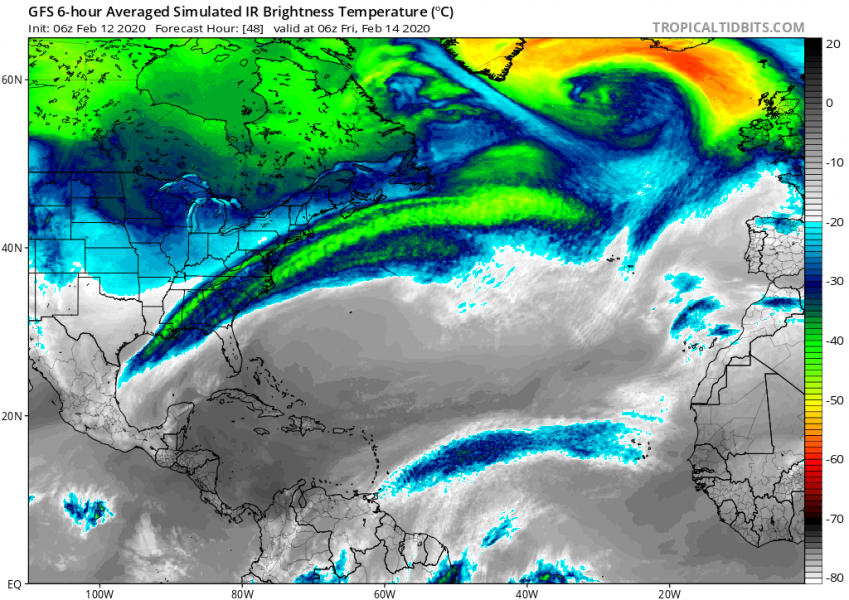 The system will be rapidly intensifying from this afternoon through tonight and until tomorrow (Thursday) evening, significantly expanding in size. We can see there will actually be twins (twin-cyclones) present tonight (a combination of the UK & Ireland cyclone with the bombogenesis further west), while the system remarkably intensifies through late morning tomorrow. Pressure will likely approach 945 mbar around midday, continue deepening into 935 mbar range overnight to Friday. On Friday, the system’s center will already be in the far North Atlantic with a violent windstorm introducing hurricane-force winds across Iceland. 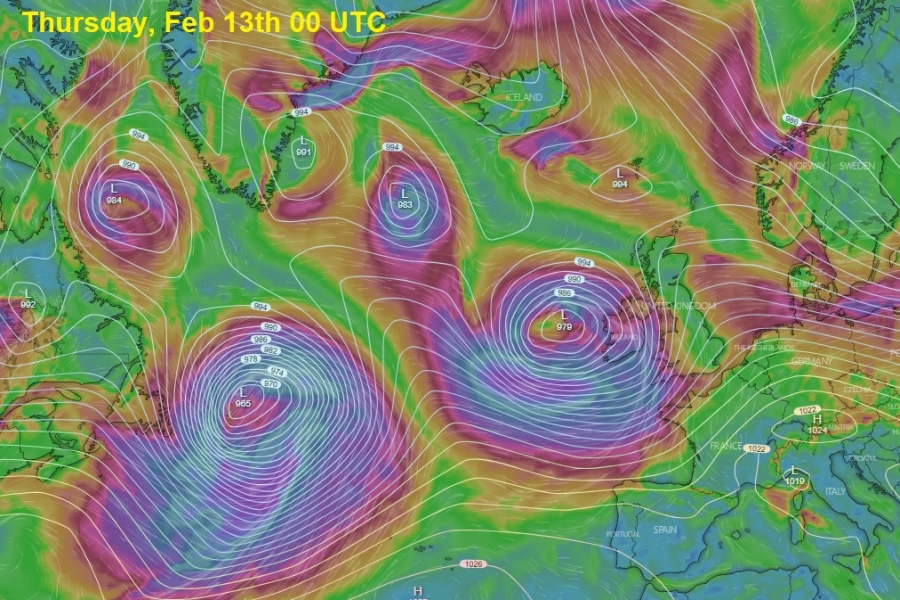 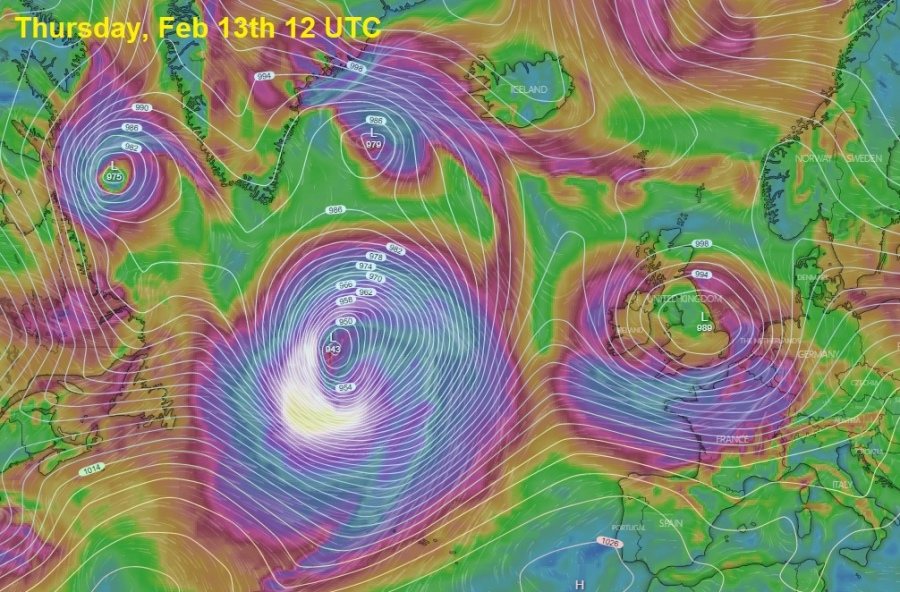 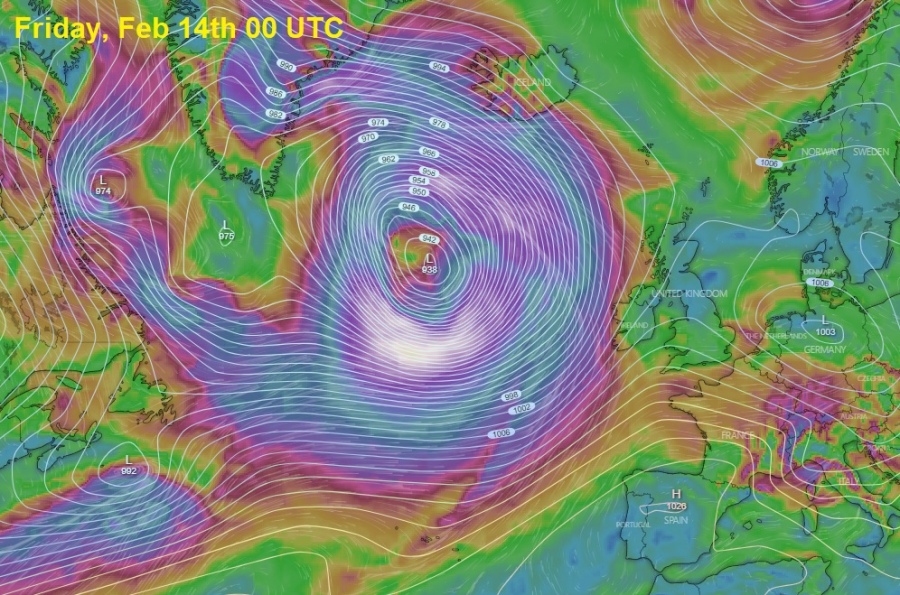 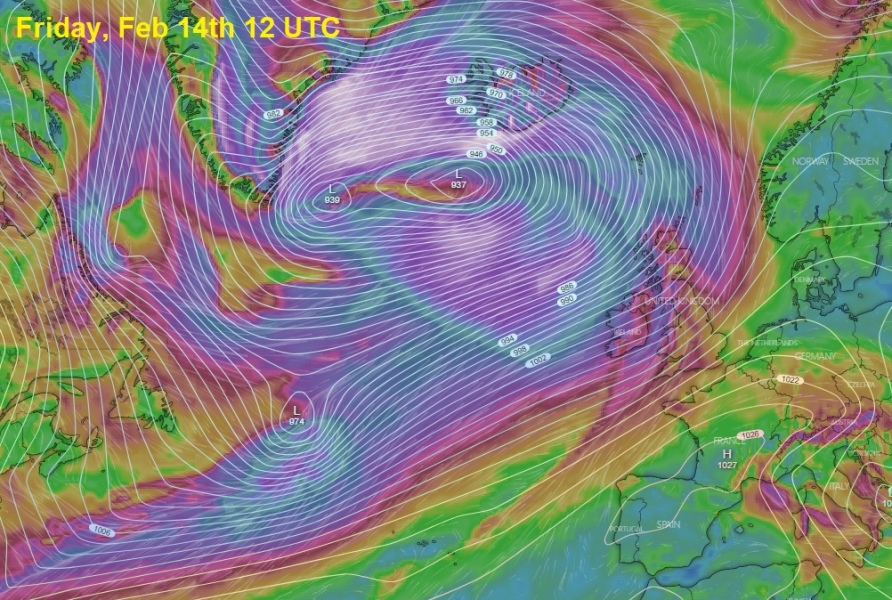 Here is the overall wind accumulation across the North Atlantic, based on the ECMWF model. Exceptional hurricane-force winds will develop across a very broad area. Fortunately, this wind maximum will remain over the open waters of North Atlantic. But also notice extreme winds over Iceland and east-southeast Greenland. 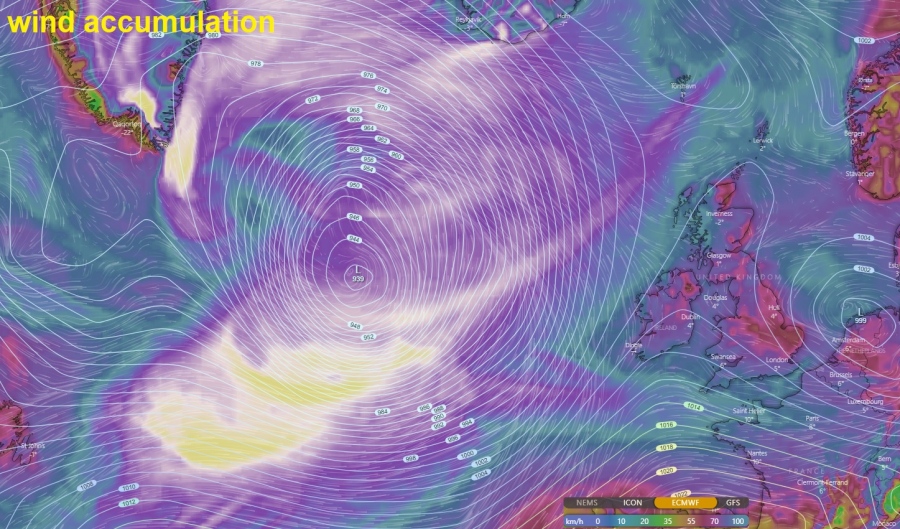 Another very important feature of interest resulting in disrupting marine traffic across the North Atlantic will be exceptionally high sea waves, as a very powerful, violent winds develop over a broad area and produce monster waves. Models are hinting those could be 15-18 meters (= 50-60 feet) high, gradually spreading across the North Atlantic. Despite smaller, but still major waves will also push towards UK, Ireland and Faroe Islands! 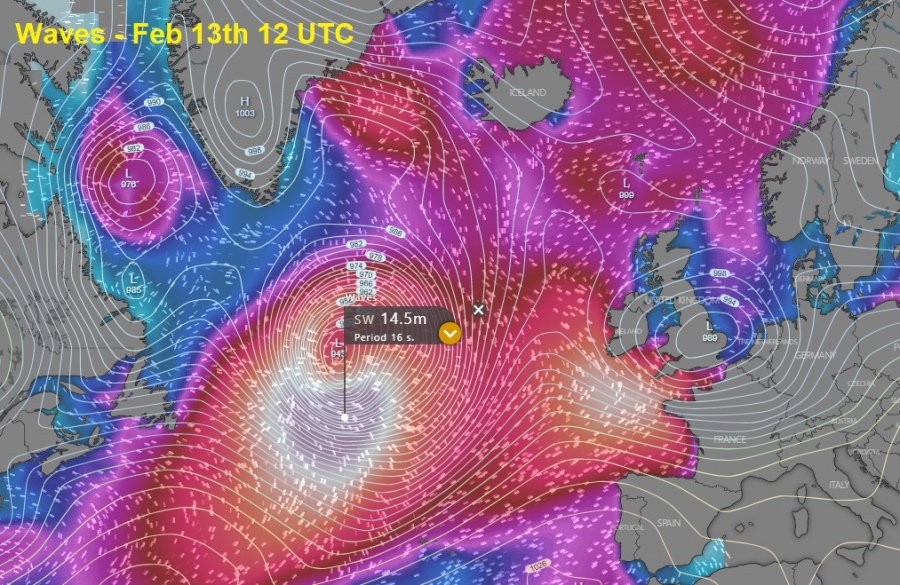 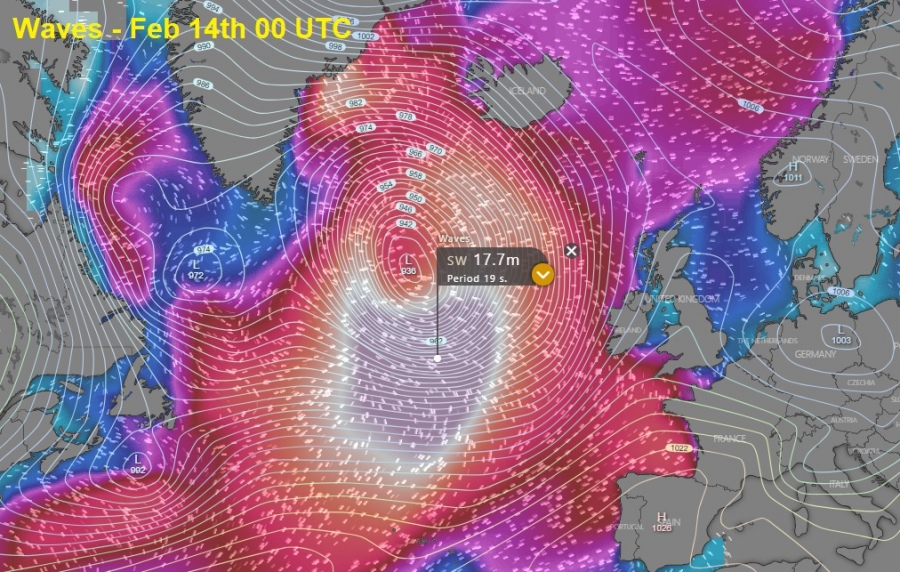 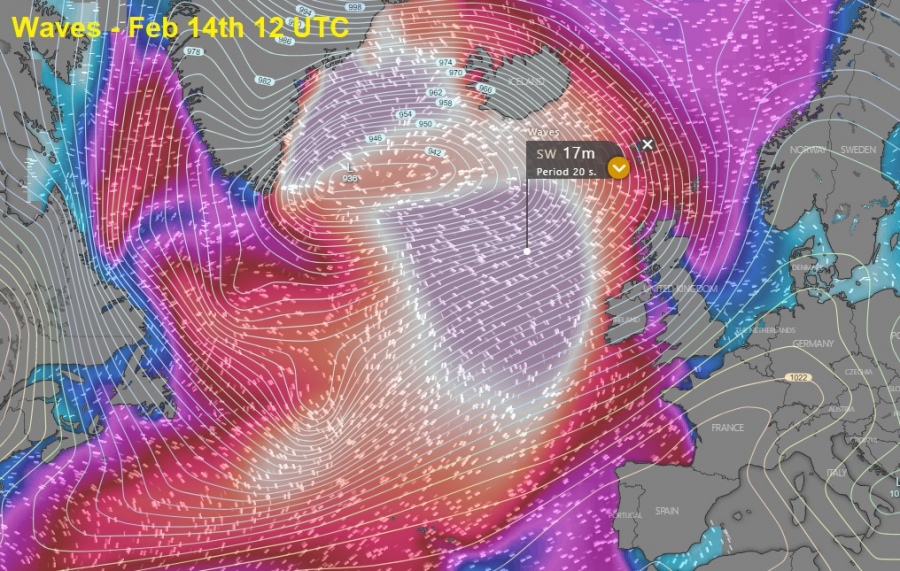 This is an overview of the violent extra-tropical cyclone developing the North Atlantic, more details on its effects on the land areas will be added later – stay tuned!