As expected, the Northwest and North Atlantic are creating a spectacular show tonight. A very impressive satellite presentation is seen on the explosive cyclogenesis near the Newfoundland this evening, the system has deepened for a remarkable 39 mbar in the past 24 hours – much more than a threshold for rapid intensification/bombogenesis cyclone (-24 mbar / 24 hours). Additionally, both North Atlantic and Pacific are very active at the same time, both having a tandem of twins! Don’t miss the North Pacific tandem of twins (see the link at the bottom).

Today’s 18 UTC surface analysis, Feb 12th, reveals the two cyclones over the North Atlantic were both quite deep. They were connected to each other with the surface front in between. The western one was in an extremely rapid intensification with a central pressure of 970 mbar, located just east of the Newfoundland. While the eastern cyclone has matured and had a central pressure of 976 mbar, moving into the UK and Ireland. Below are the past 24 hours analysis in 6-hour intervals. 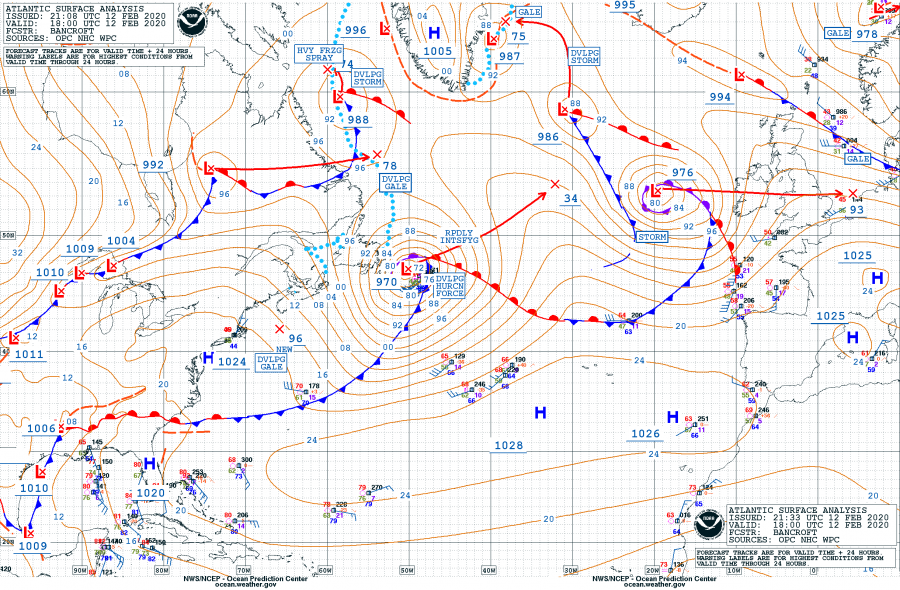 Cyclone #1 – the western system over the Northwest Atlantic. We can see the pressure drop was an incredible 39 mbar during the past 24 hours!

Cyclone #2 – the eastern of the twin, moving into western Europe (UK and Ireland) tonight. Its pressure has dropped for 22 mbar during the past 24 hours.

Thhe satellite presentation of both is very impressive! Attached is the visible satellite channel over the North Atlantic, we can nicely see the eastern cyclone is maturing while the western one is rapidly organizing, expanding and strengthening. It will become *very* large tomorrow.

Here are the close-up satellite images for the western, rapidly deepening cyclone. This is a textbook example of the explosive development of an extra-tropical cyclone: 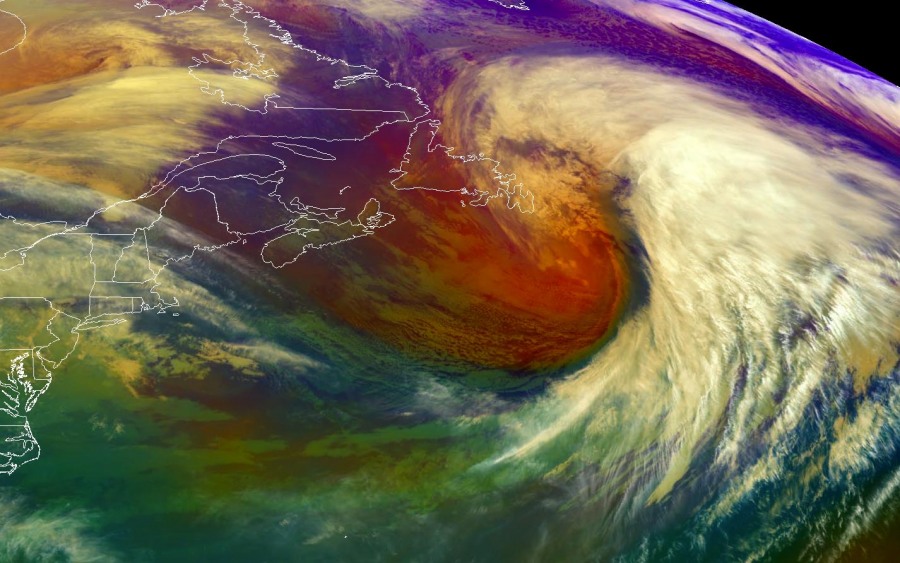 The impressive system over the Northwest Atlantic will remain in extremely rapid intensification phase overnight and most of tomorrow, expected to deepen for another 30-35 mbar over the next 24 hours, reaching around 935 mbar by the late afternoon hours (Thursday, Feb 13th). The eastern of the twins will cross the UK and England overnight and through the morning hours, deliver severe winds and strong cold front across Ireland, England, Wales, and northern France.

Meanwhile, there are also twins – two deep cyclone ongoing in the North Pacific:

Read more about the developing North Atlantic storms and the ongoing cyclone towards UK and Ireland: