We are again experiencing very cold nights and mornings this week, as widespread cold outbreak swept through a large part of our continent on Sunday and Monday. It’s been cold and locally frosty morning today, but we have two more very cold nights ahead over a large part of Europe. Possibly even three nights across the Balkans where the cold pool will remain until Friday. With the lack of winds and stronger thermal inversion in the lowlands over the next few days, there is a *HIGH RISK* for damaging frost to vegetation and blossoming trees.

With the clearing skies and weakening winds last night, many stations across Germany were reporting very cold temperatures, 3-6 °C below zero this morning. Even around -8 °C in parts of southern Germany and northern Austria. Down to -6 °C in central France and northern Spain. 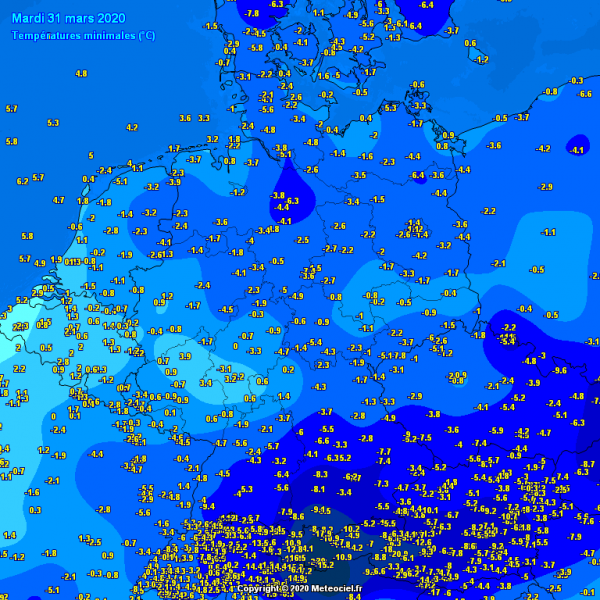 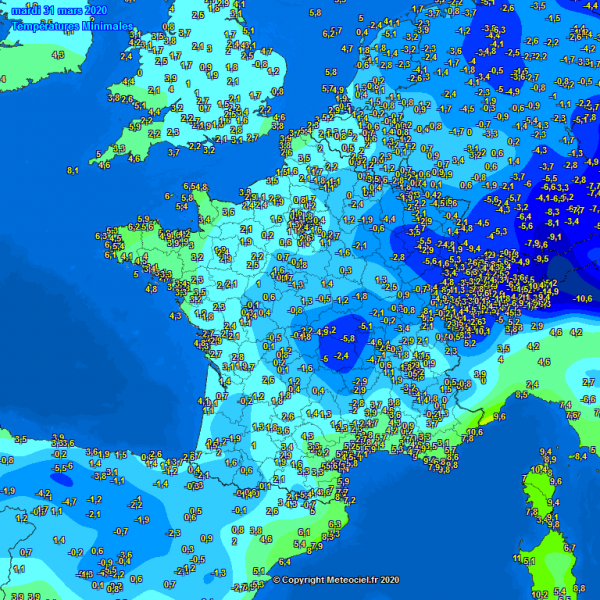 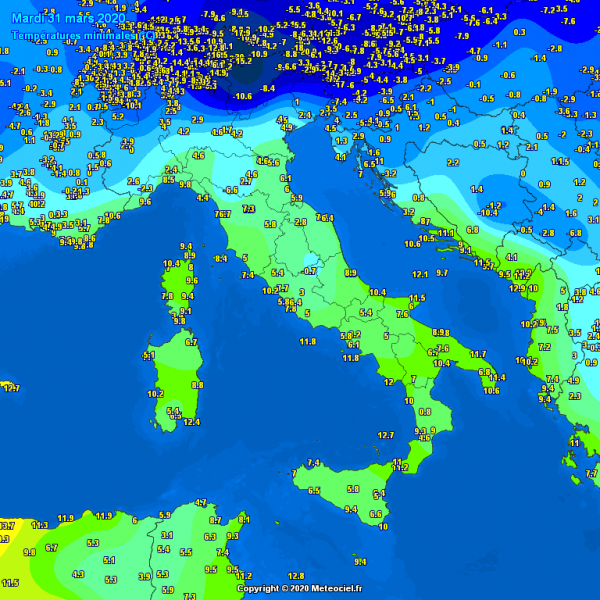 Through mid this week, the upper ridge over western Europe and North Atlantic is weakening, but its associated surface high-pressure system is expanded towards central Europe and the Balkans, so the overall wind field beneath the system is weakening. The high-pressure system should maintain until Friday, although gradually weakening. This usually means the daily temperature amplitudes will be stronger. In other words, morning temperatures are likely to push lower than over the last few nights when winds and clouds were limiting the overnight cooling. 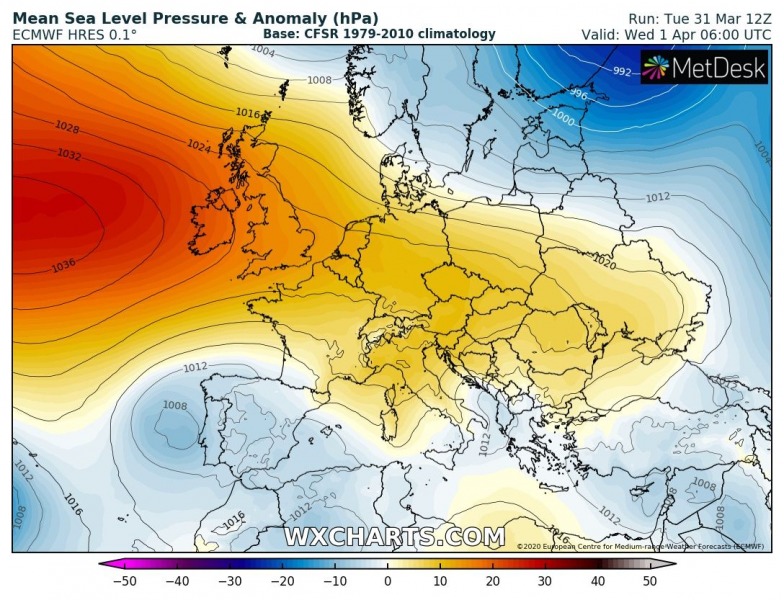 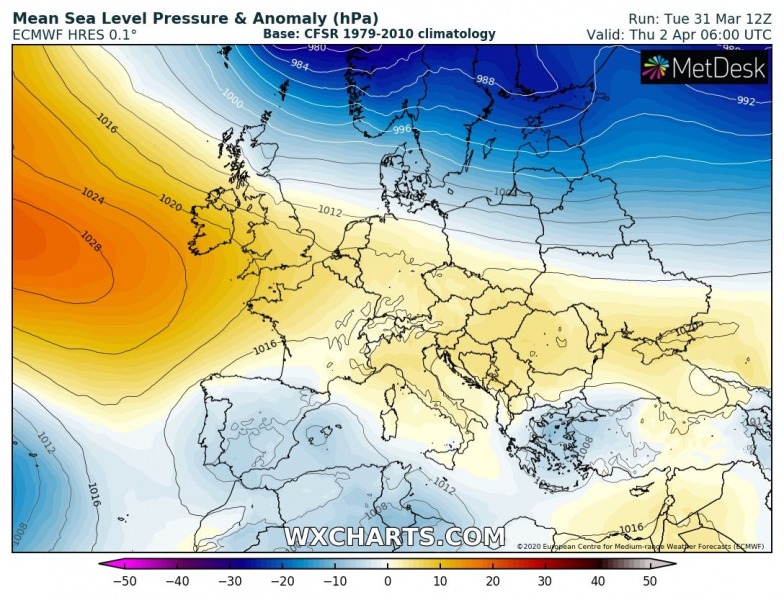 The 2m temperature anomaly will be EXTREME through Tuesday/Wednesday and Wednesday/Thursday nights, with temperatures roughly 8-14 °C colder than normal for early April. This is indeed very dangerous for the crops and all vegetation as temperatures will be well below freezing. 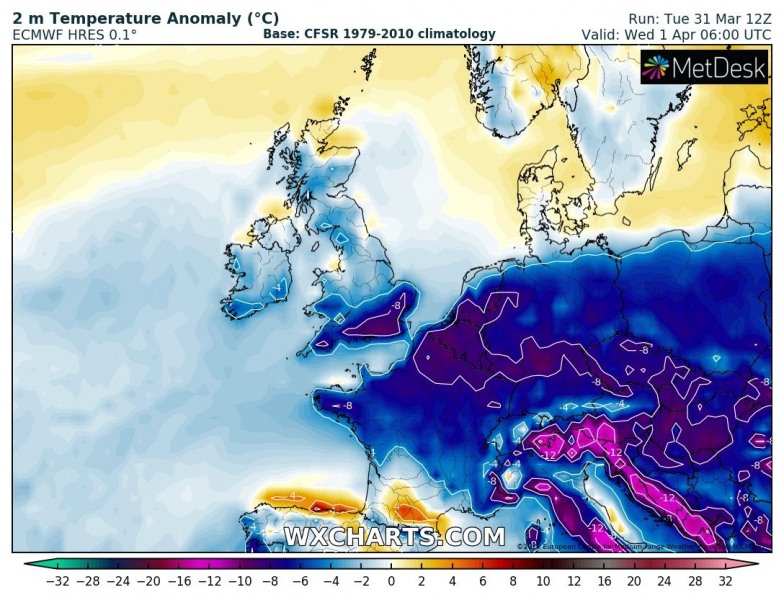 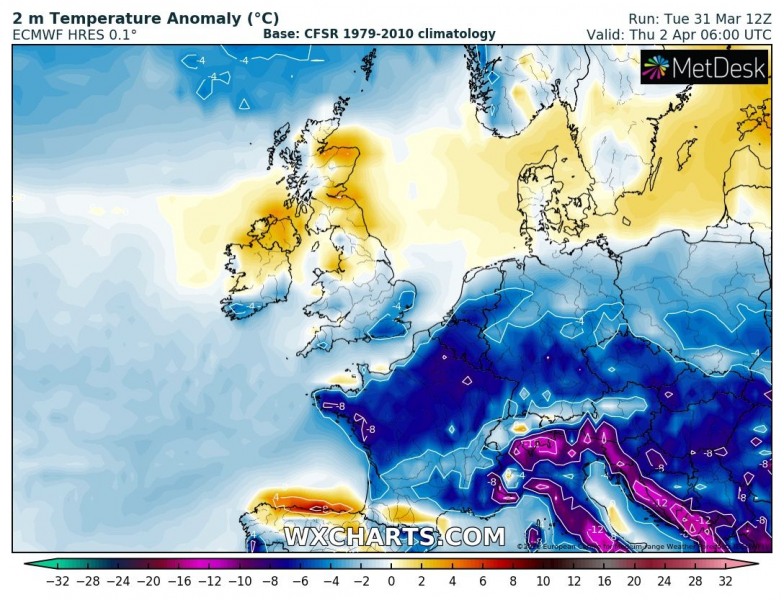 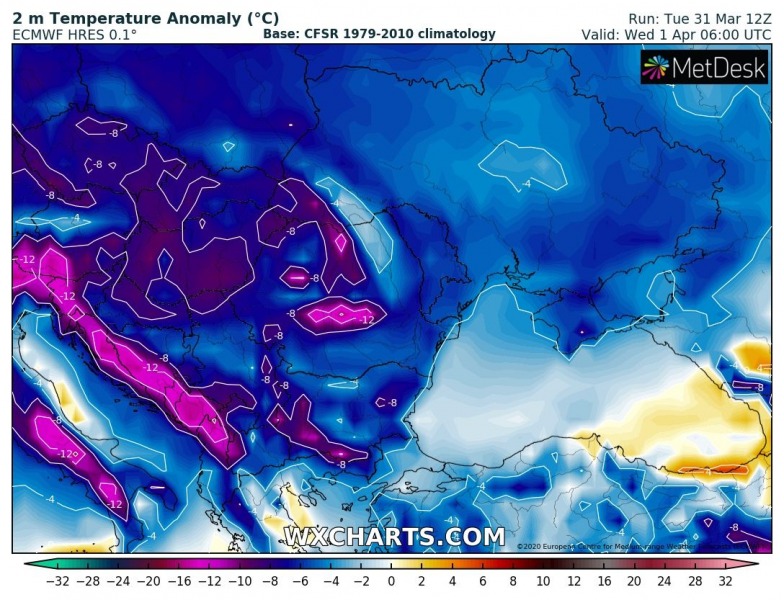 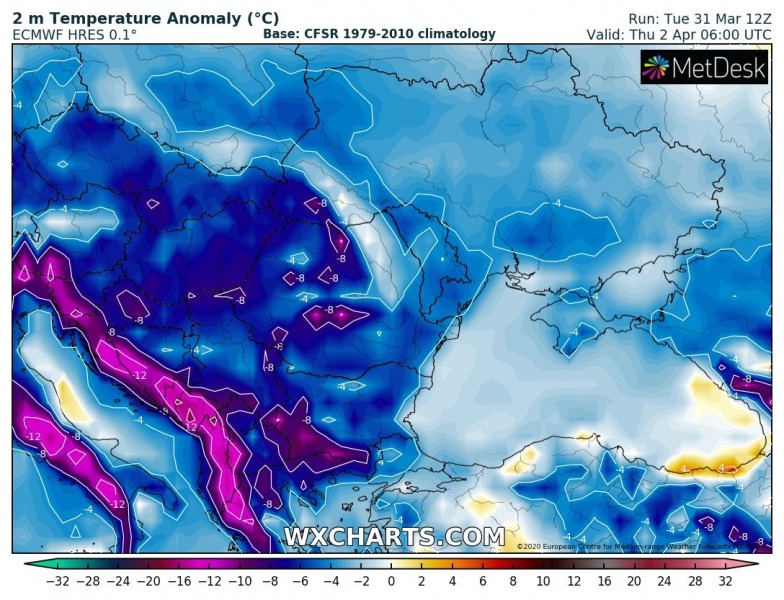 The next two nights and mornings (Wednesday, April 1st and Thursday, Apr 2nd) will be very cold. We can expect the minimum temperatures to push well below zero in many areas again. Including France, Benelux, Germany, southern England, Czechia, Slovakia, Poland, Slovenia, Hungary and much of the Balkan peninsula. Including North Macedonia and Greece. Also parts of Italy. These southernmost countries are prone to a destructive morning frost, as vegetation and blossoming trees are way ahead of the average dates (around 3-4 weeks in some areas). Attached are minimum temperatures until Friday: 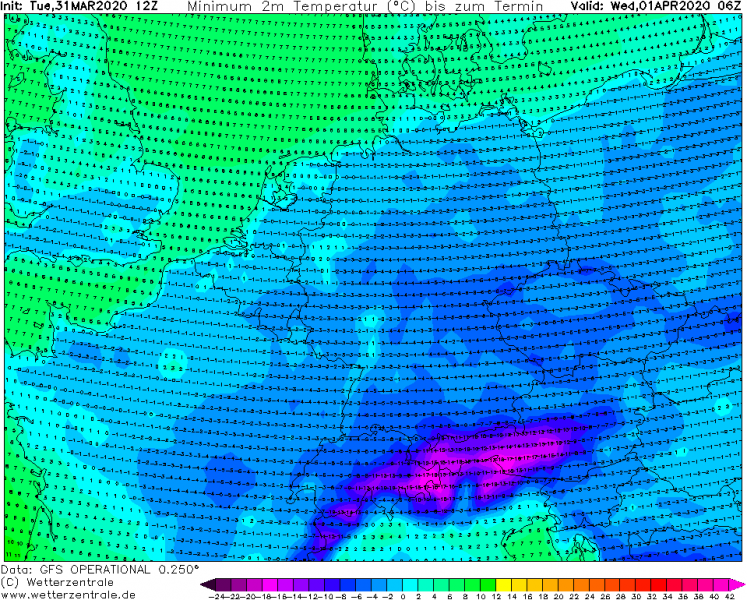 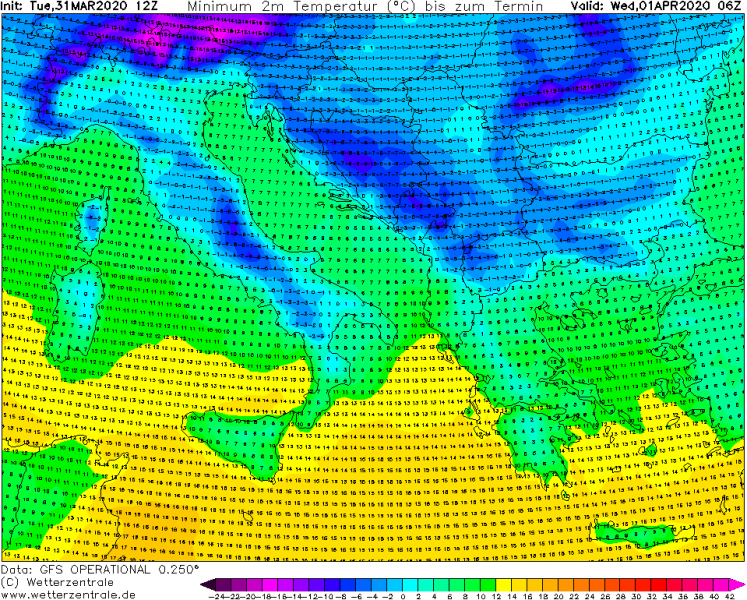 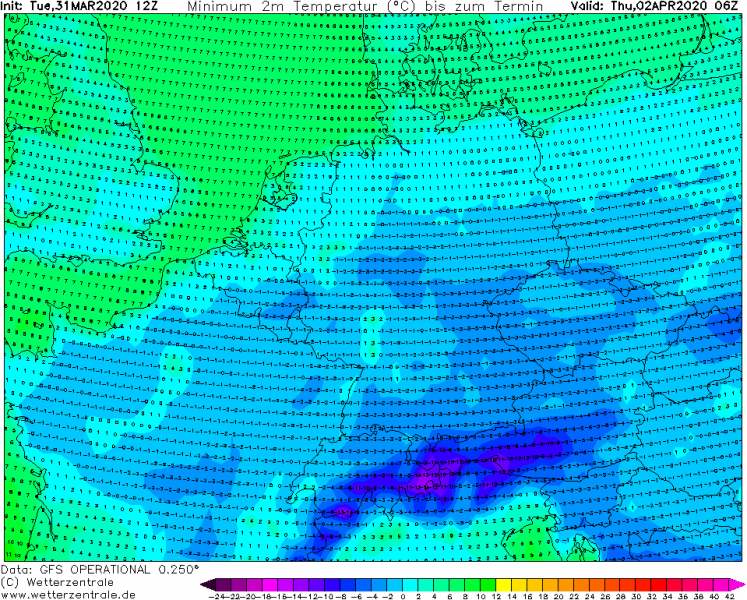 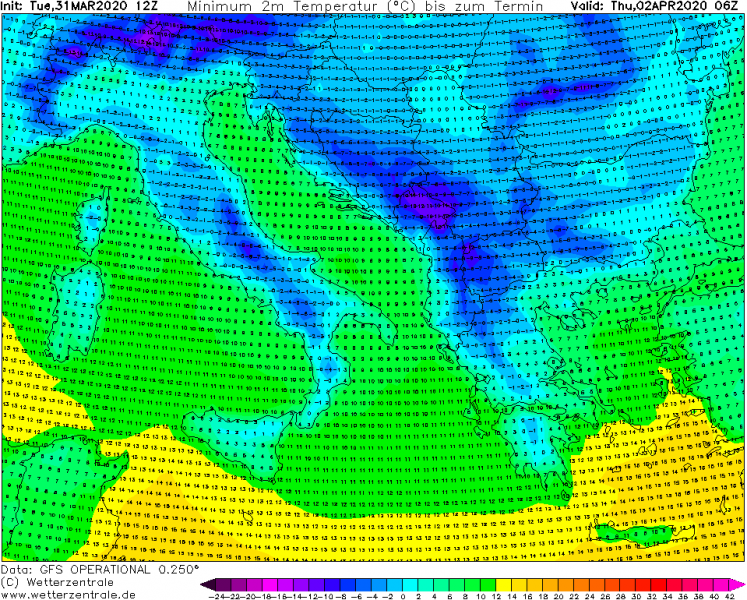 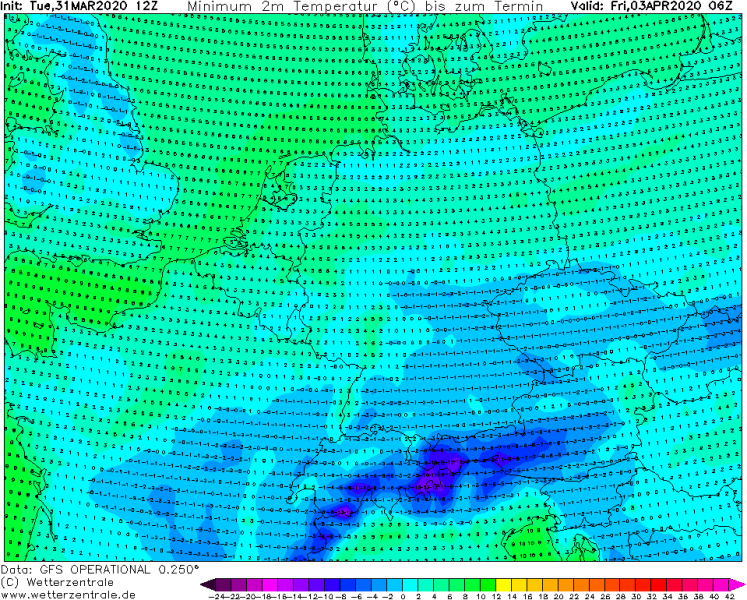 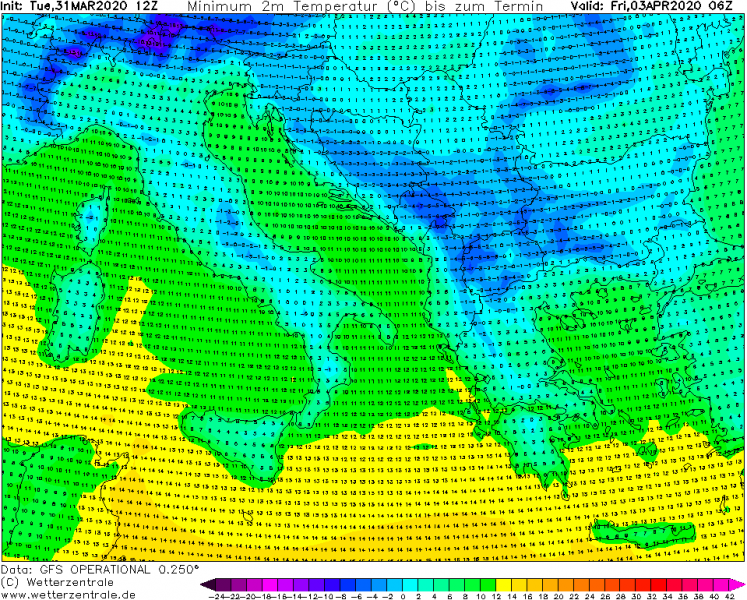 Stay alert for damaging frost in your area until Friday. Over the weekend, much warmer air mass spreads across Europe from the west – spring weather returns.

See also – the previous discussions about the cold outbreak: