#COVID-19 *update*: Significant decline in global air traffic continues – the number of flights at the end of March is more than 60% lower than normal

As we discussed a week ago, there is an obvious substantial decline in global air traffic, followed by the restrictions and national lockdowns during the Coronavirus / COVID-19 pandemic outbreak around the world. Many countries and airlines have shut down the airports, tens of thousand flights were canceled. At the end of March 2020, there has been more than a 60% drop in the global air traffic compared to last month or March 2019. Such an amount of grounded flights will undoubtedly have a positive effect on the climate, e.g. temperature difference and indeed air pollution. 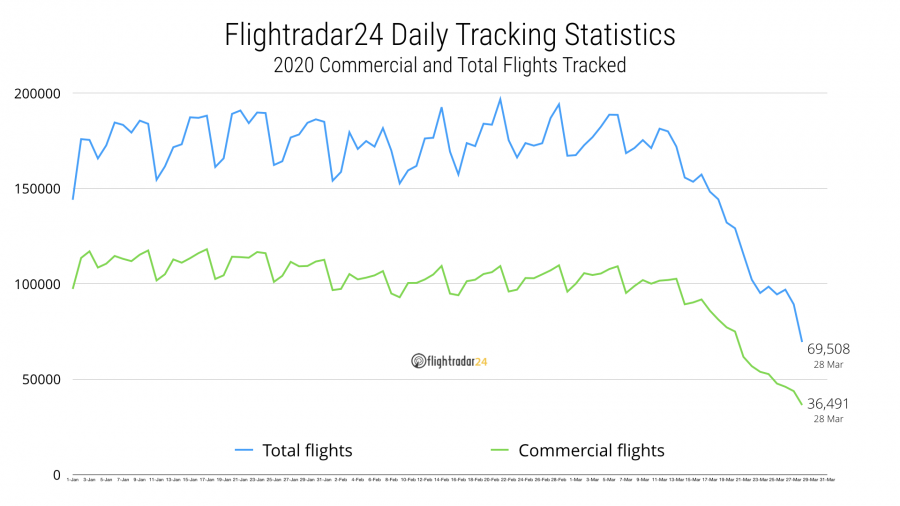 Another impressive comparison is the number of flights between the last few years, from 2016 to 2020. We can see the air traffic is increasing each year, but with less than 70.000 daily flights lately, that’s a remarkable and sharp drop compared to the average of 160-180.000 flights in the past years: 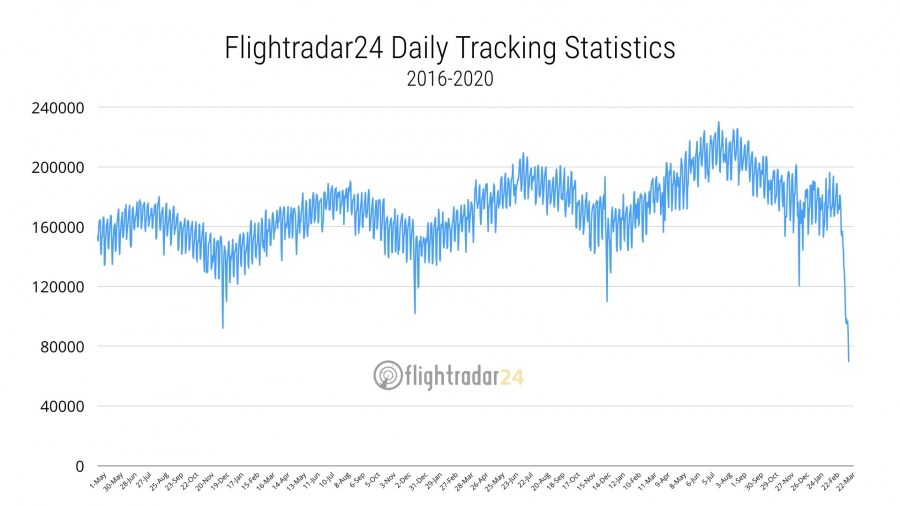 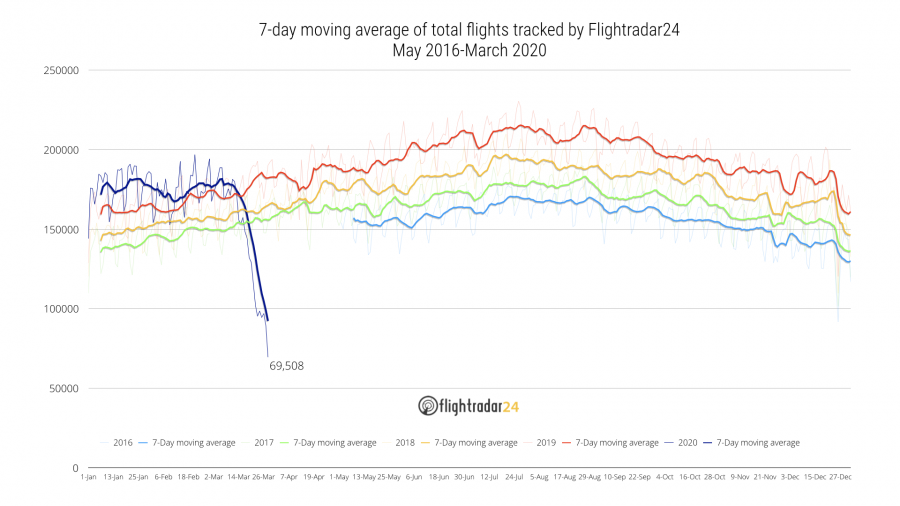 Numerous airliners are closing their routes, which has become very obvious on the flight coverage maps compared to earlier this month or last year. Attached are maps over Europe, the United States, and South America:

There are many more special flight operating, precisely the flights delivering medical supplies and equipment in various countries around the world:

The @AerLingus A330 is now on its way back to @DublinAirport from Beijing with medical equipment. https://t.co/CkUoUHPH3e pic.twitter.com/fegJ557Tdo

A Boeing 767 from SkyTaxi is en route from Warsaw to Shanghai in order to collect medical equipment for Polandhttps://t.co/kbOcL9xeql pic.twitter.com/Use6ZRxJ7M

Here is a pretty remarkable gesture a Hungarian pilot made on March 27th – a perfect time to express appreciation for healthcare professionals fighting COVID-19 in Hungary:

⛑👍 Yesterday, one pilot took to the skies above Hungary to express appreciation for healthcare professionals fighting COVID-19.

Many grounded flights and parked airplanes:

A look at just a few of the 40+ planes parked at O’Hare as airlines dramatically scale back operations. @WGNNews @flightradar24 #avgeek pic.twitter.com/4JxIFv03Gf

Thai Airways aircraft are parked on the tarmac at Suvarnabhumi Airport in Bangkok (BKK) on March 25, 2020 after the airline suspended international flights due to the Covid-19 coronavirus. (AFP photo) pic.twitter.com/lTiNbtTxgS

Jets parked! cargo flights, reality of what we read about https://t.co/o5fUB2JjCD

Given the fact the COVID-19 pandemic outbreak is far from over yet, we can expect the number of flights through the month of April will continue to decline. We will keep you updated with new data again later in April, as this is historic on a global scale!

Meanwhile, see how the significant decline started in mid March:

See also – COVID-19 outbreak and nationalwide restrictions are already having an effect on the air pollution (NO2), e.g. Italy and China:

… and global CO2 levels as well:

A much colder air mass is now spreading across Europe - cold outbreak will intensify across east-central Europe through Monday and Tuesday
← Previous
First days of April 2020 with very cold and frosty mornings in many areas - *HIGH RISK* for damaging frost
Next →
Comments are closed.