Like there is not enough stress along with the ongoing COVID-19 virus outbreak this spring, strong cold outbreak across Europe and now the significantly PM10 polluted air making things even worse! Today, the existing pattern over Europe has resulted in extremely high values of Particulate Matter (#PM10) air pollutants across the southern half of Europe. Very high values of PM10 aerosols are expected to advect across much of central and reaching also western Europe this weekend.

Animation of dust transport across east and south Europe these days:

It’s known that big cities, where inversion layers are often resulting in higher concentrations of PM2.5 and PM10 particles trapped in the valleys, have a higher risk of worsening the respiratory diseases. Studies have shown that longer exposure to air pollution like PM2.5 or PM10 leads to a lower ability to fight off lung infections with those patients who are having chronic lung and heart conditions. We have also seen that with the ongoing COVID-19 virus, these patients are at the highest risk for serious health issues if they also suffer the pre-existing chronic lung and heart conditions.

Despite reports of cleaner air due to a strong decrease in transports, a long-tradition of pollution may have intensified the coronavirus disease (COVID-19) in certain areas, the European Public Health Alliance (EPHA) warned on Monday. Experts are still examining the correlation, but are considering the hypothesis that some conditions can make the effects of the virus worse. For instance, doctors are linking hypertension, diabetes and respiratory diseases (all possibly caused by air pollution) to the higher mortality rate for COVID-19. Air pollution leads to about 400,000 early deaths annually. One of the most affected areas is the Po Valley in Northern Italy, where COVID-19’s outbreak was detected in February.

Source: People Living In Polluted Cities May Be At Higher Risk From COVID-19

Read more: Is there a correlation between Pm10 and coronavirus? A study says yes.

Today, a lot of weather stations across south-central Europe and the Balkans have recorded extremely high values of PM10 particles. Normally, the values of 20-30 µm can be observed, many European countries have a warning when values exceed 50 µm. But today even more than 5-10 times higher than normal values have been observed in some regions. Here is an example from the capital of Slovenia – the city of Ljubljana: 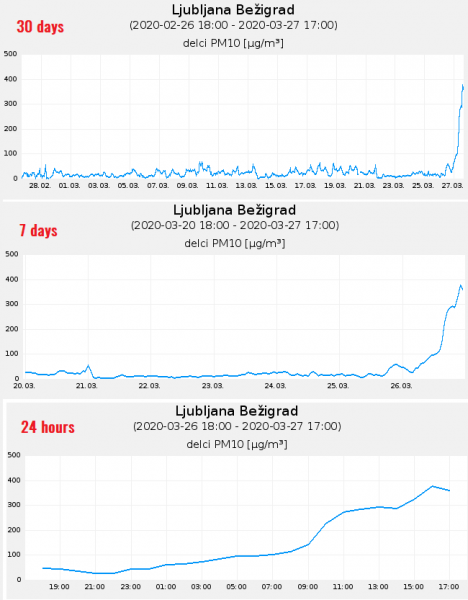 Here are some other reports of enhanced PM10 values from Italy, Germany and Poland:

The ongoing weather pattern over Europe – the extensive upper-level ridge across the northern half of Europe and large upper low over the Mediterranean – has lead to air mass advection from the east into central Europe and also west-northwest. 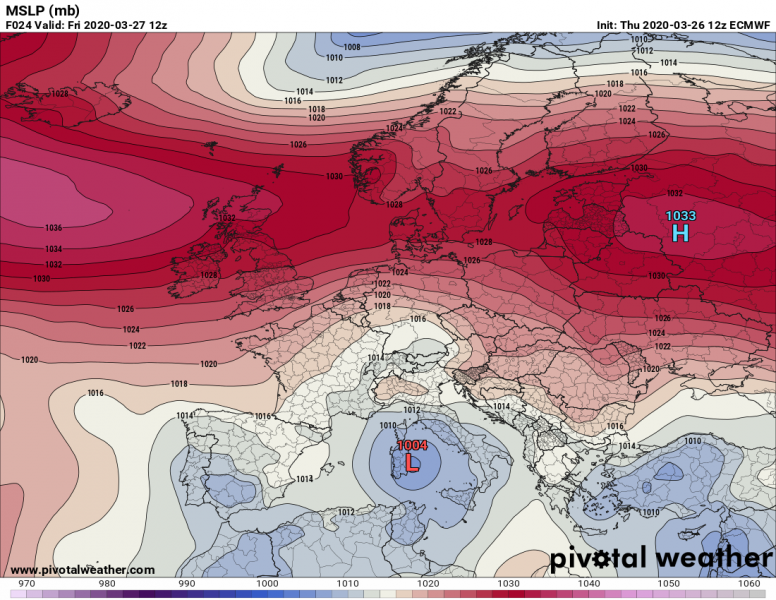 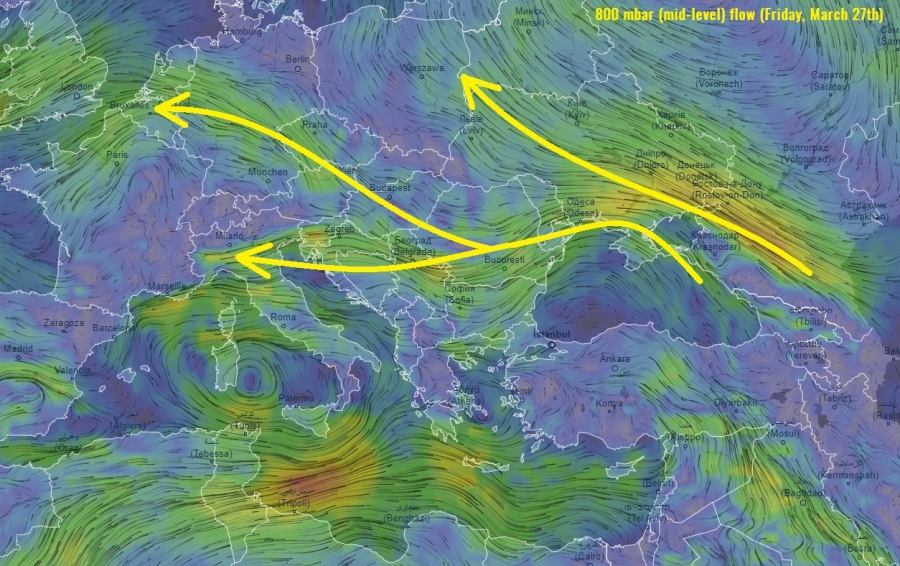 This pattern is now delivering very high values of PM10 particles from the Caspian Sea (and the Karakorum desert to its east) far west across the Balkan peninsula and central Europe. Such flow will remain over Europe until Sunday, so very high values are also expected to spread further north and west into Germany, reaching Benelux and France as well. The highest values are likely to remain over the Balkans and central Europe, including Italy. With the likelyhood of another Arctic outbreak after Sunday, the northerly flow will finally clear the air from north to south and flush away the highly polluted air behind the surface cold front. High values of PM10 should, however, remain across the Mediterranean and southern Balkans after Tuesday. Attached are the PM10 particles forecast maps through the next 4 days: 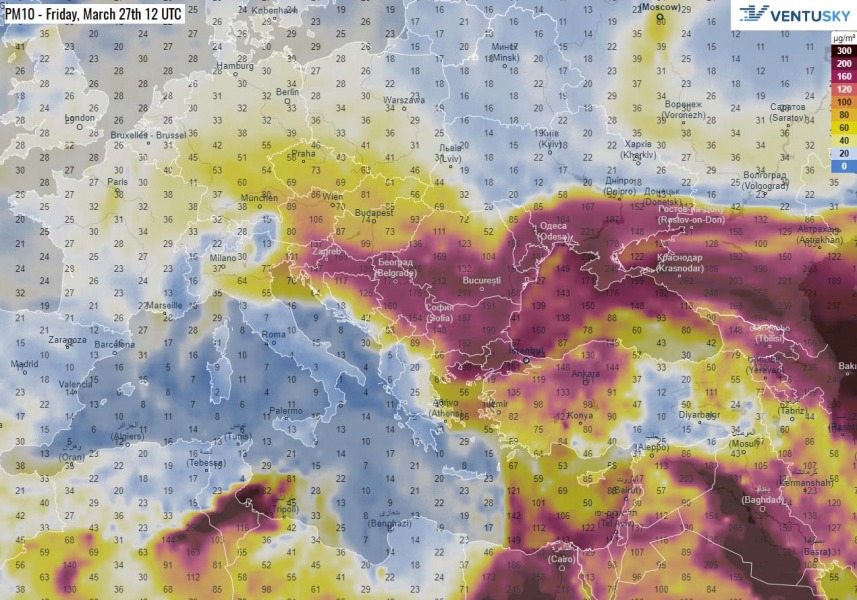 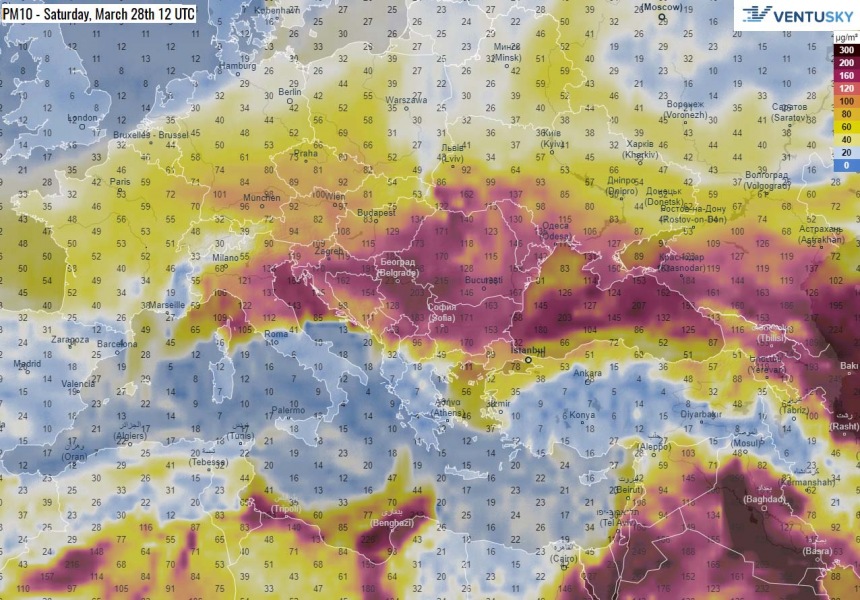 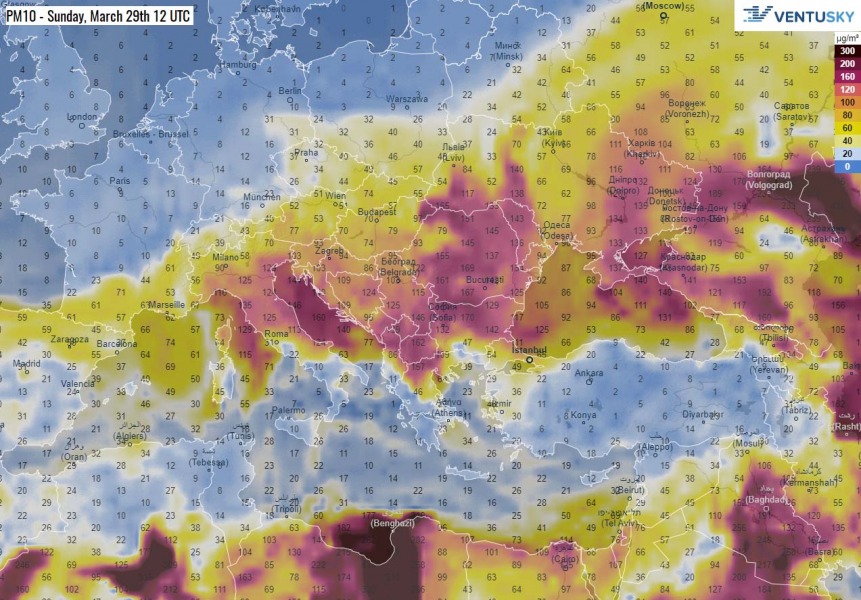 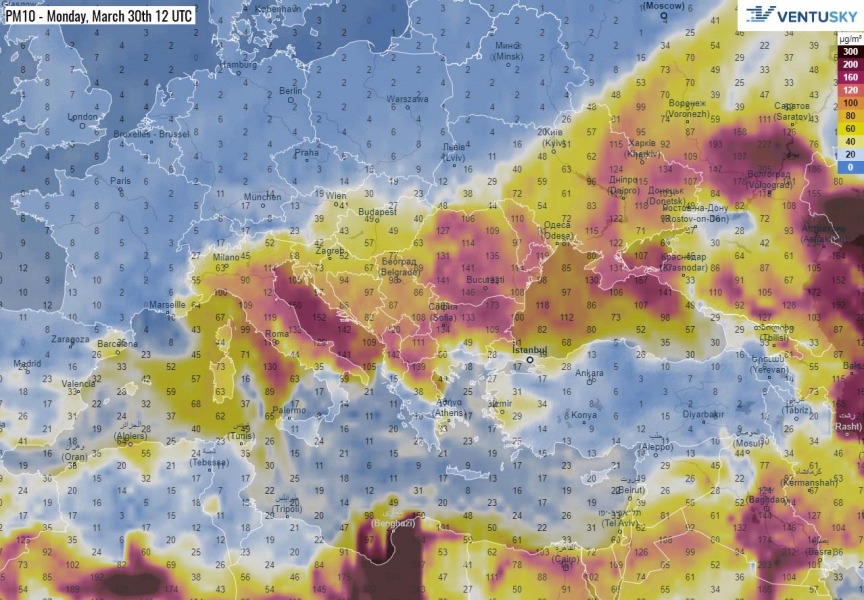 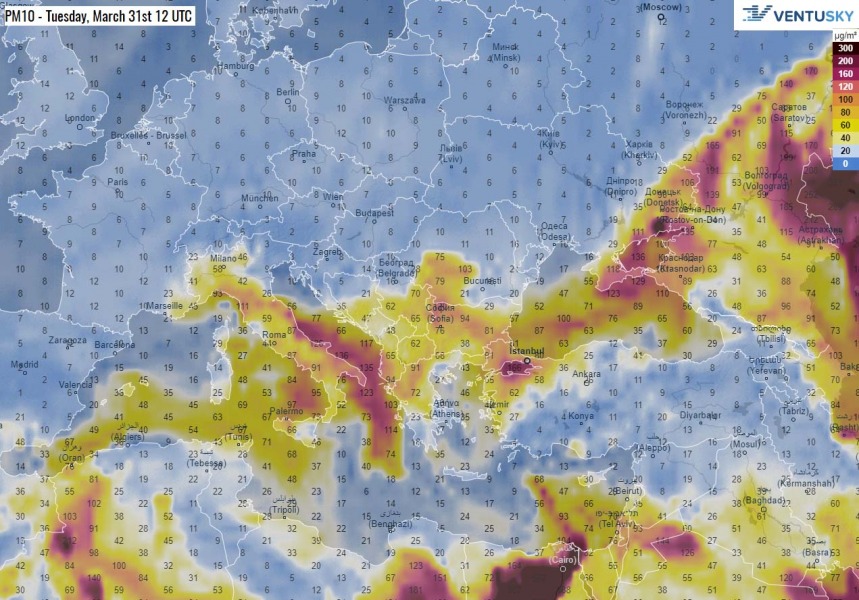 There is a lot of dust particles in the air across the southern half of Europe today, due to the favorable pattern advecting it from the south and east. #PM10 (particulate matter) values are extremely high! Here is a "Dust Optical Depth" forecast for this weekend. Source: AEMET pic.twitter.com/vLDR0Zw390

Note: Besides gaseous pollutants, the atmosphere can also be polluted by particles. These particles (either in suspension, fluid or in solid-state), have a divergent composition and size and are sometimes called aerosols. They are often cataloged as ‘floating dust’, but are best known as particulate matter (PM). This floating dust is most often categorized based on their aerodynamic diameter. The aerodynamic diameter of a dust particle is the diameter of a sphere-shaped particle that shows the same behavior in the atmosphere as a dust particle (which does not necessarily have a sphere shape). In the framework of air quality problems, particulate matter is the most important. Particulate matter such as PM10, PM2.5, PM1, and PM0.1 is defined as the fraction of particles with an aerodynamic diameter smaller than respectively 10, 2.5, 1 and 0.1 µm (for your information: 1 µm = 1 millionth of a meter or 1 thousandth of a millimeter). In comparison, the average diameter of a human hair equals 50-70 µm.