It has been very calm weather over the European continent over the past few weeks, thanks to a persistent blocking of high-pressure systems. Now at least western Europe will enter a more dynamic pattern, as several deep North Atlantic depressions will form over the next 10 days. The first is rapidly developing south of Greenland now, pushing major sea waves towards Ireland and Scotland on Thursday until Friday.

A large trough has emerged south from Greenland into the North Atlantic. In response to a very cold air mass advection, explosive surface cyclogenesis – extratropical storm – is underway south of Greenland, moving east. It will travel between Iceland and the UK on Thursday and Friday. 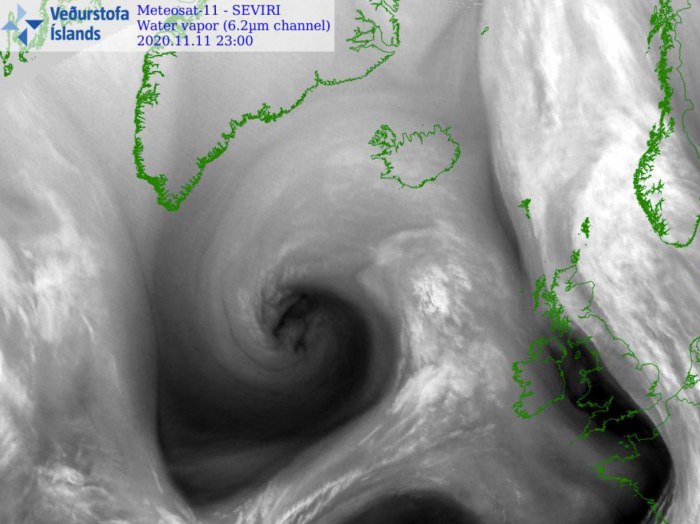 On Thursday, the system will become a rather large North Atlantic depression with the central pressure peaking around 955 mbar. It will develop a broad channel of severe to extremely severe winds and release significant waves towards Ireland and the UK over the next two days.

Below is an impressive visible satellite image of a rapidly developing system today, Wednesday. A broad channel of Arctic air mass is advecting from the Labrador Sea into the North Atlantic, helping the rather explosive development of the low.

A textbook appearance is visible on the satellite images. 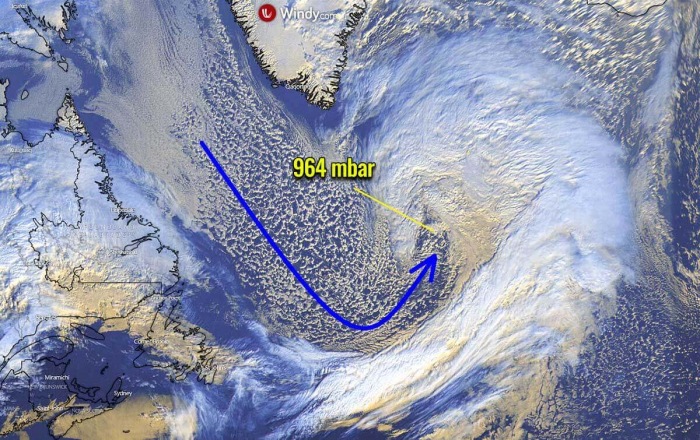 The center of the circulation is located to the south-southeast of Greenland. We can also see the cold maritime air mass is spreading towards the depression. 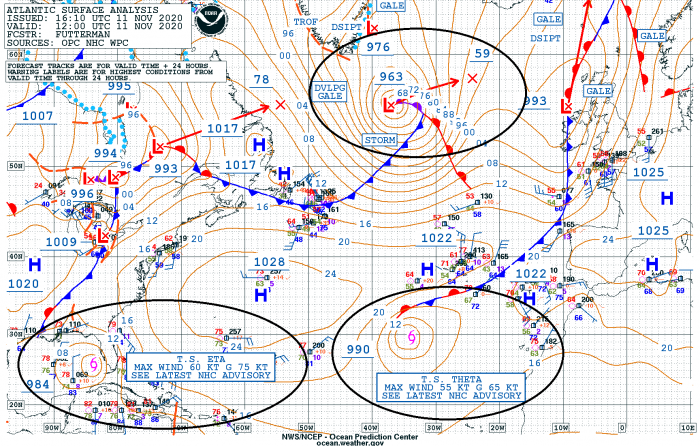 The extratropical storm is marked. While we can also see both tropical systems further south – a Tropical Storm Eta in the Gulf of Mexico and the Tropical Storm Theta south of the Azores.

Here are details for the mean sea-level pressure of the developing depression:

The central surface pressure of this core has deepened from 989 mbar to 963 mbar since Tuesday 12 UTC. That is a 26 mbar pressure drop during the past 24 hours which is beyond the threshold for explosive cyclogenesis of rapid intensification of a surface low.

RAPID DEVELOPMENT OF THE STORM

The rapid intensification process is still underway and additional strengthening is expected through Wednesday night into early Thursday. The central pressure will deepen for another 10 mbar.

By early afternoon on Thursday (12 UTC), the central pressure is forecast to reach near 955 mbar. A strong windstorm will develop to the immediate south-southwest of the cyclone’s core, also releasing major waves. 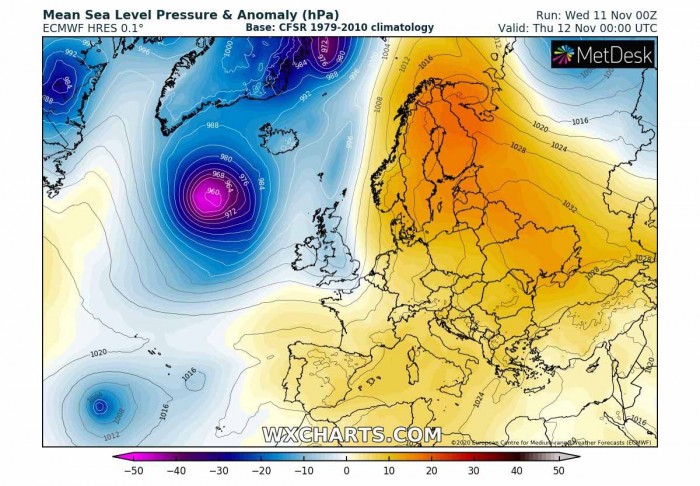 There will be a pressure difference of more than 75 mbar between the cyclone’s core and the upper ridge and the surface high-pressure system over the European continent.

A strong wind field will develop, gradually spreading east to the immediate south of the core. Notice also there is a Tropical Storm Theta south of the Azores visible. 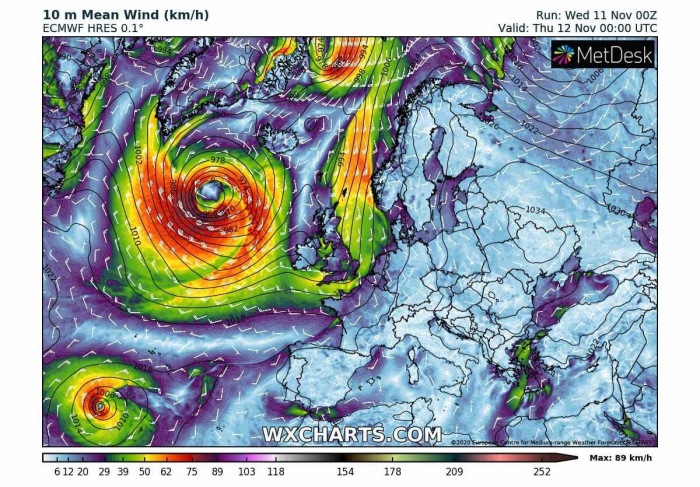 The low will continue east through Thursday and should be south of Iceland by Friday morning. Its central pressure should remain below 960 mbar, so the wind field will maintain its intensity until Thursday evening. Then, it is expected to begin gradually weakening into Friday morning. 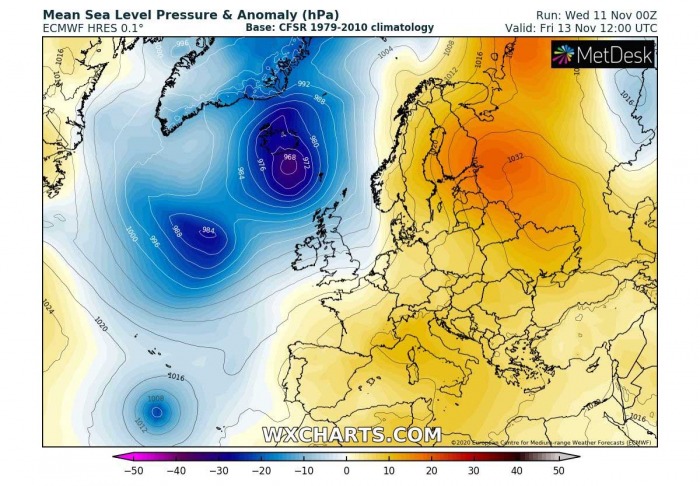 The wind field, however, will be quite broad, so the winds will be severe. The main cold front with severe winds is forecast to reach Ireland and western Scotland by Thursday afternoon.

But as the low will be progressing more towards the north-northeast, the strongest winds will not spread too far east over the UK. 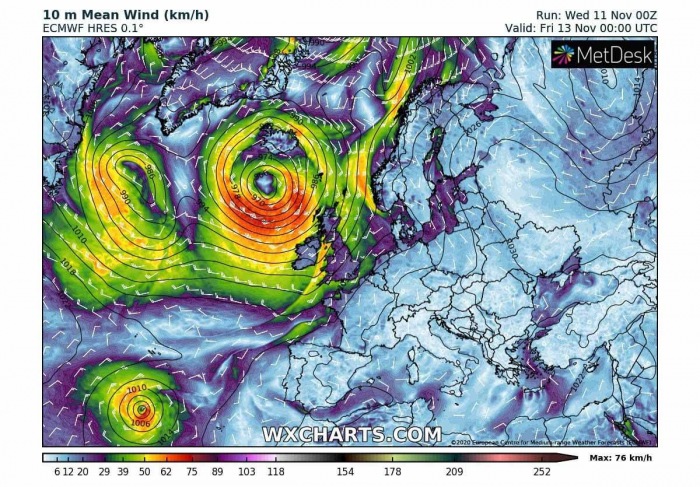 But they will spread across the Faroe Islands on Friday, also becoming severe across southern Iceland. Peak gusts are likely to reach above 120 km/h in some places.

And looking over the accumulated wind gusts (swath), we can see a very large area will be affected by violent, even hurricane-force winds. Thanks to the European strong high-pressure system, the strongest winds will remain over the open North Atlantic. 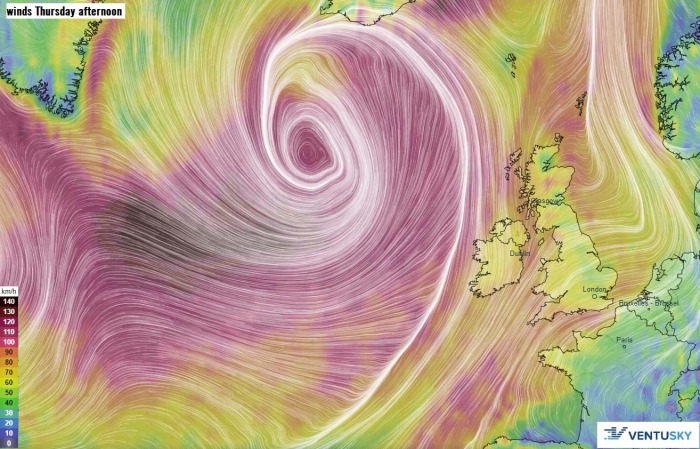 Significant wave heights are expected to develop due to the explosive nature of this North Atlantic extratropical storm, which results in a broad wind field. 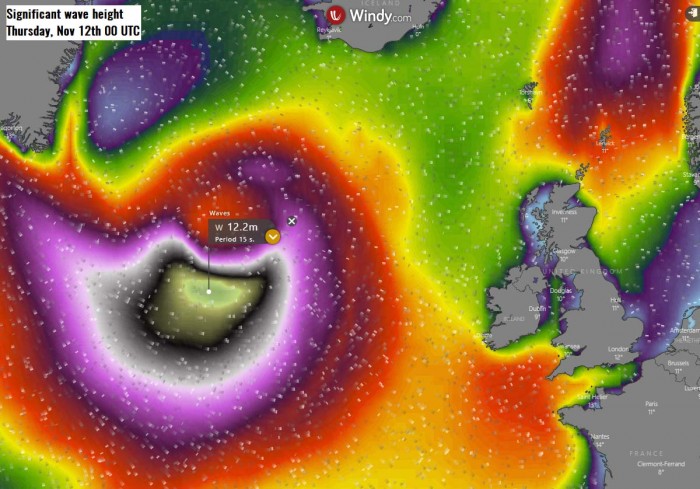 Major waves will develop with a height of 11-12 meters (35-40 feet) likely to the south of the low’s center on Thursday. 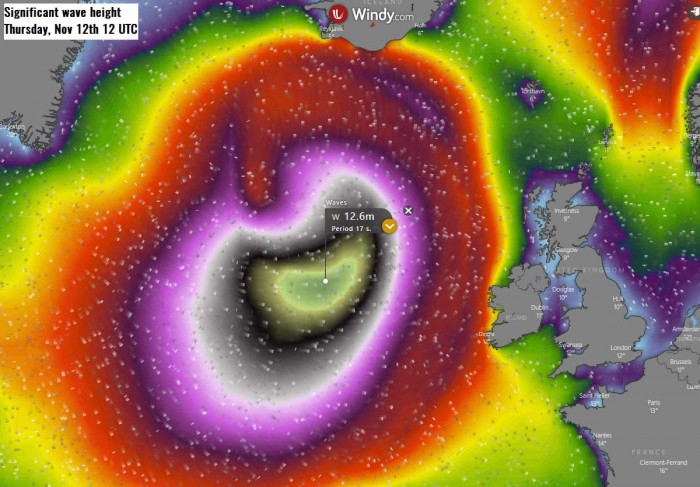 These major waves will be gradually moving towards the east, reaching Ireland and the UK on Thursday night into Friday morning. The highest waves could reach around 10 meters (32-34 feet) when they reach the coastal areas of western Ireland, western Northern Ireland, and western Scotland. 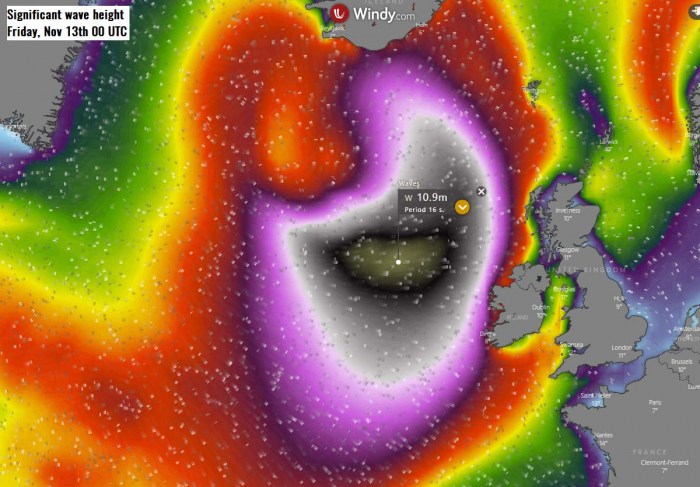 With the system weakening its strength and diminishing winds, waves will gradually become lower on Friday. But should still remain around 8-9 meters (25-30 feet) while moving towards the Faroe Islands. 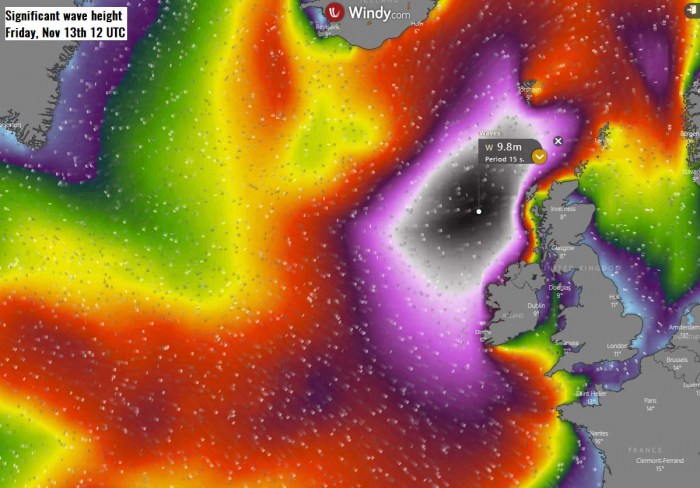 There have been a few strong North Atlantic systems already this fall. One was actually in late August, moving into Ireland and Scotland on Aug 25th.

Strong Atlantic storm pushes a windstorm into Ireland and the UK, Aug 25th

And then, there was so far the strongest North Atlantic extratropical storm of this fall, occurred on Oct 28th. The system was actually originating from the ex-hurricane Epsilon, which combined with another North Atlantic low and exploded into a monster storm.

The North Atlantic low becomes the most intense extratropical storm of the fall season so far, massive waves spreading towards Ireland and the UK, Oct 28th 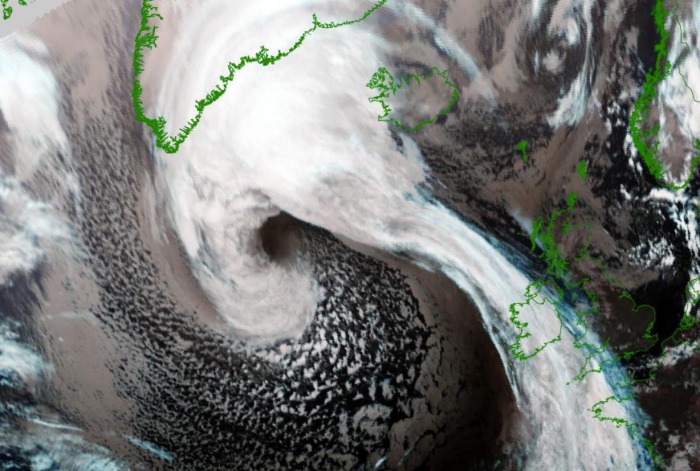 The system released a massive windstorm and major waves towards western Europe over the last days of October. Its central pressure peaked around 940 mbar!

Currently, there is a Tropical Storm Theta ongoing south of the Azores. Initially, it was born as a Subtropical storm about 1000 miles southwest of the islands on Monday night.

Theta is the 29h named storm of the already extremely active 2020 Atlantic hurricane season. The season is so active, that there is now use of the Greek alphabet for naming the storms. 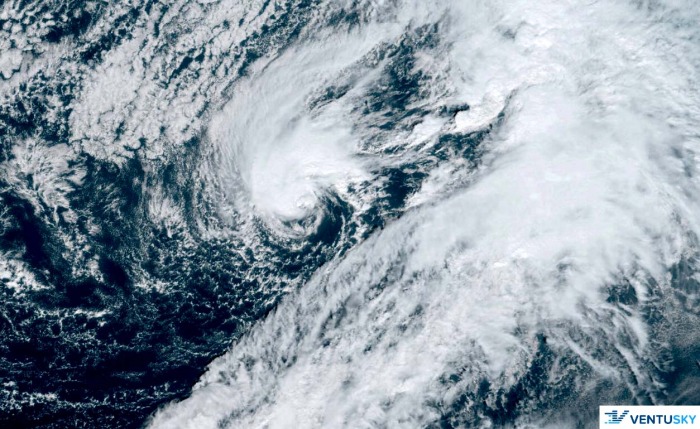 Tropical Storm Theta is expected to slowly drift east-northeast over the next few days, tracking between the Azores and the Canary Islands.

There are some model hints that it also turns towards Portugal early next week as a post-tropical storm, being embedded in the frontal system moving in from the west.