A rapid intensification of Hurricane Epsilon is underway this Wednesday and further strengthening is likely. Epsilon has become a major hurricane while approaching Bermuda this evening. Epsilon will transition into a powerful extratropical storm and turn towards North Atlantic late this week. And it could reach Europe by Tuesday.

The center of hurricane Epsilon was about 300 miles to the east-southeast of the island while a spectacular satellite presentation is seen today.

A Tropical Storm Warning has been issued for Bermuda. Tropical-storm-force winds are possible from Wednesday night into Thursday afternoon hours.

Epsilon has been upgraded to a hurricane last night and became the 10th hurricane of the 2020 Atlantic hurricane season to date. The rate of intensification was quite high, as sustained winds have increased from 60 to 110 mph over the 24-hour period.

Epsilon is now a major, Category 3 hurricane, packing 100 knots (115 mph) winds. It is the 4th major hurricane of 2020 Atlantic hurricane season after Laura, Teddy and Delta.

Below is an exceptional water vapor satellite image on Wednesday afternoon, provided by Tropical Tidbits. 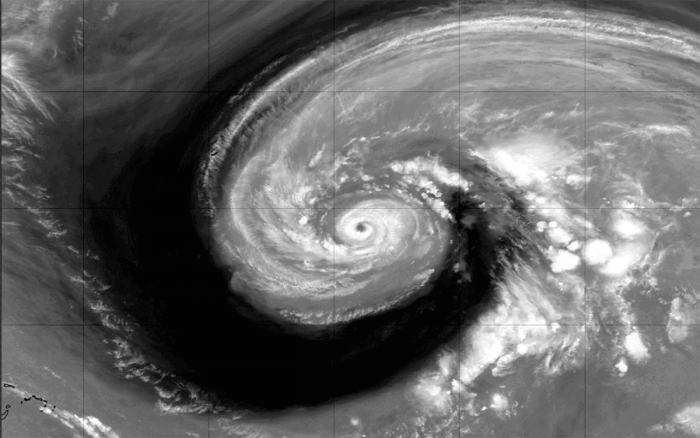 Epsilon is the strongest Atlantic hurricane this far north (29.4 °N) this late in the calendar year (end of October) since hurricane Wilma (2005). It is already a record-breaker, becoming the earliest 26th Atlantic named storm on record, beating out the storm that formed on November 22nd, 2005. 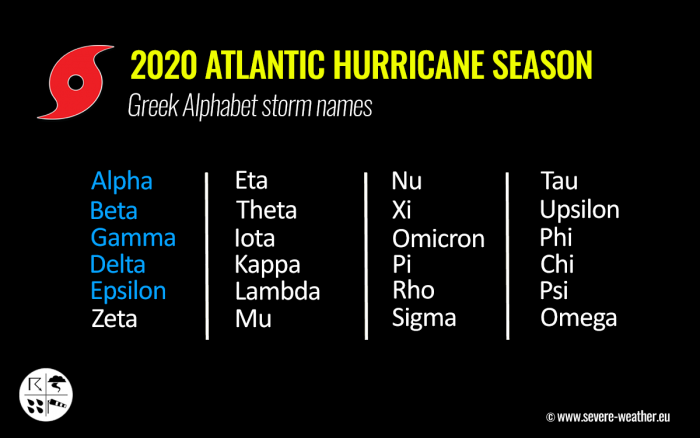 It is only the second time in recorded history, the Atlantic Basin has seen a storm named Epsilon. In 2005, Epsilon formed at the end of November and was at a hurricane strength between December 2nd and 7th – the longest-lived December hurricane on record.

According to the National Hurricane Center (NHC), “Tropical storm conditions are expected on Bermuda beginning later today and continuing intermittently through late Thursday when Epsilon is forecast to make its closest approach east of the island.”

Dangerous surf and rip currents are likely occurring along the coasts of Bermuda, the Bahamas, the Greater Antilles, and the Leeward Islands. These conditions are also expected to spread to portions of the East Coast of the United States and Atlantic Canada over the next couple of days.

Over the next few days, Epsilon will be gradually turning towards the northeast while moving across the Northwest Atlantic and transition into an extratropical storm. The system will be caught up in the jet stream and continue strengthening into a very powerful North Atlantic storm over the weekend and approach Europe early next week.

The remnant of Epsilon will act like a typical North Atlantic storm, originating from the tropical storm or hurricane earlier. The full-power strength could reach Iceland, Faroe Islands, Ireland and the United Kingdom early next week, potentially around Tuesday.

We have created a high-resolution animation of 10-meter winds across the North Atlantic, starting from today until the early next week. The ongoing hurricane Epsilon can be seen near Bermuda, transitioning into a very powerful and large extratropical storm while moving into the North Atlantic and Europe.

Satellite presentation is beyond exceptional with a textbook closed and compact Cloud Density Overcast (COD) around the eye. Epsilon has an intense eyewall. 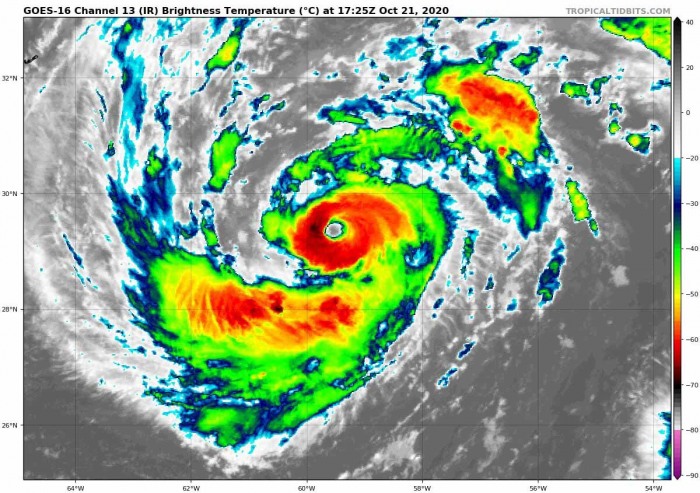 Hurricane Epsilon has become quite a large system, with a spectacular and textbook outflow pattern to its east and north. Notice a tiny dot on the below geocolor satellite scan by NASA, those are Bermuda. Epsilon will pass to the east of the island and the worst hurricane-force winds will not hit Bermuda. 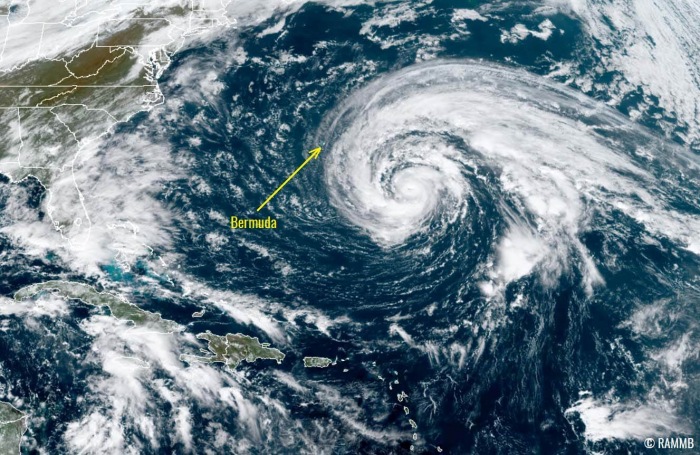 The latest, 12 UTC advisory, update suggested the sustained winds are already near 80 knots (90 mph), while the minimum central pressure was around 972 mbar. But the NOAA hurricane hunters have found the winds much more intense and the pressure deeper. 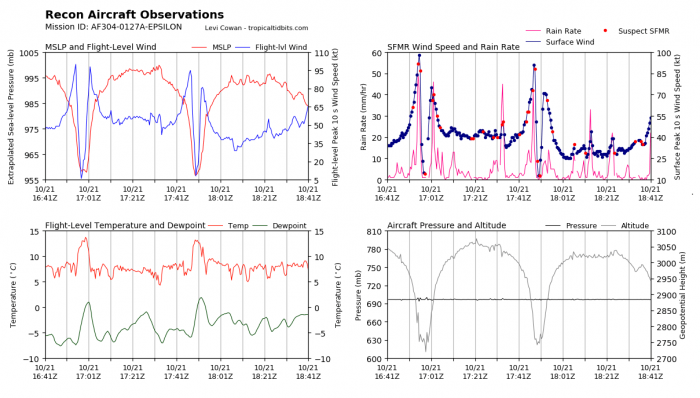 As we can see from the chart above, the two eye and eyewall penetrations with the aircraft indicate that pressure is already below 960 mbar. The dropsonde observation found 956 mbar during the latest pass. While the sustained winds were around 95 knots (110 mph).

This brough hurricane Epsilon to a high-end Category 2 strength on Saffir-Simpson Hurricane Wind Scale this afternoon. And both the hurricane hunters and satellite data suggest that the rapid intensification will continue.

Epsilon has become a major (Category 3 or greater) hurricane this evening. 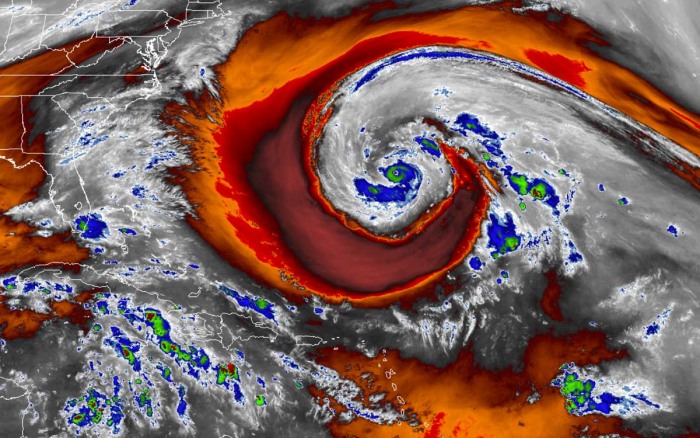 Dvorak estimates analysis (ADT) is giving near 85 knots (97 mph) of sustained winds lately, with the central pressure of around 968 mbar. The final Dvorak T number is currently around 5.0. This is slightly lower than the hurricane hunters’ scan lately.

50-knots wind radii is now expanding 50-80 miles around the eye, while hurricane-force 64-knot winds are expanding across the 20-40 miles radii in all four quadrants. The wind field is quite symmetrical through the hurricane. 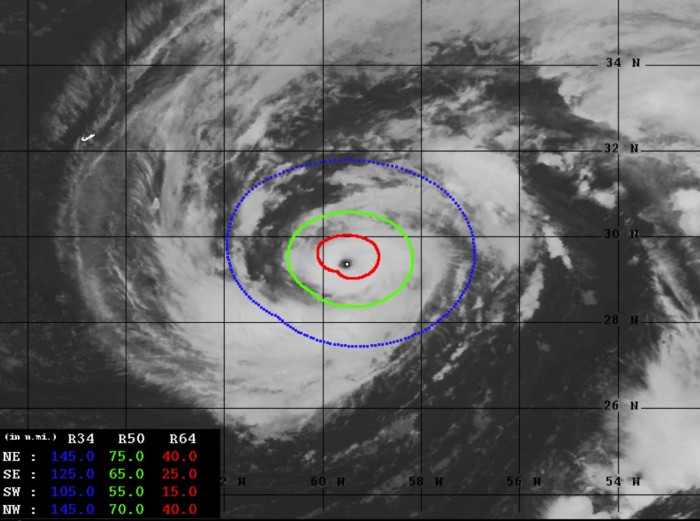 EPSILON TRACKS NEAR BERMUDA, THEN TURNS TOWARDS EUROPE

Based on the latest data, there are high probabilities that Epsilon could continue strengthening further tonight and maintain a major hurricane strength until the Thursday morning, while having the closest approach to Bermuda. On Thursday, conditions will become less favorable so Epsilon will begin a weakening trend. 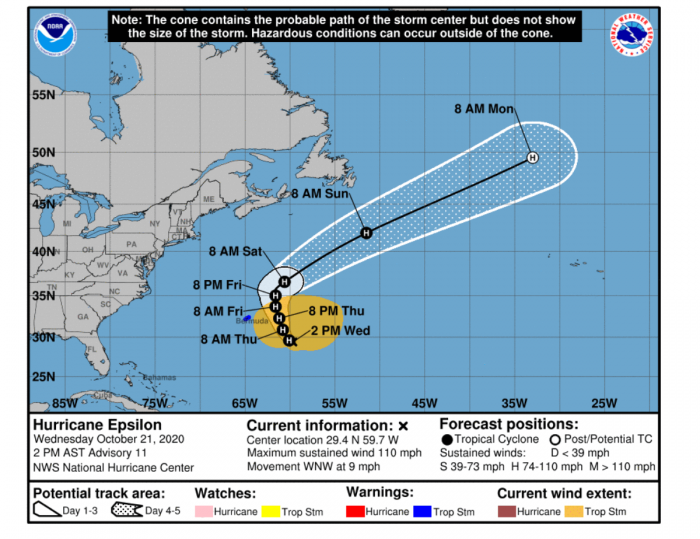 Hurricane Epsilon will transition into an extratropical storm over the weekend while turning its trajectory towards Europe. The computer weather models forecast guidance suggests the pressure in the system could reach extremely low levels as it moves over the open waters of the North Atlantic, possibly below 940 mbar. 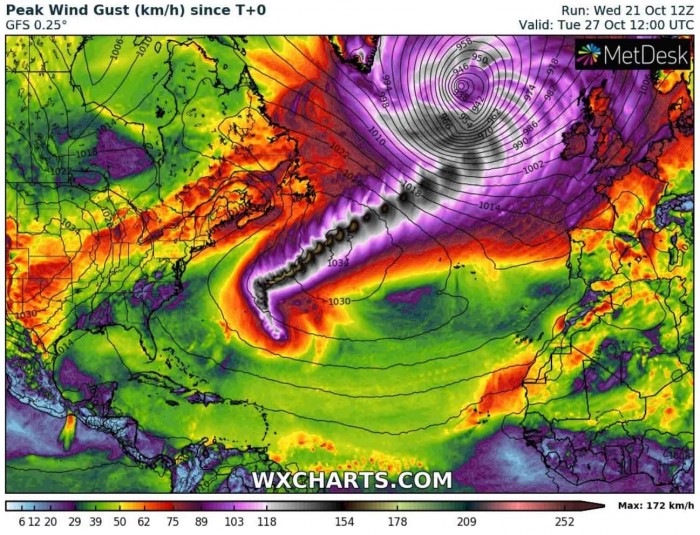 While the exact track of an extratropical storm Epsilon is still rather uncertain, models are in fairly good agreement it will be a powerful storm. As it often happens with such North Atlantic storms with the tropical origin, the potential is there for a violent windstorm. 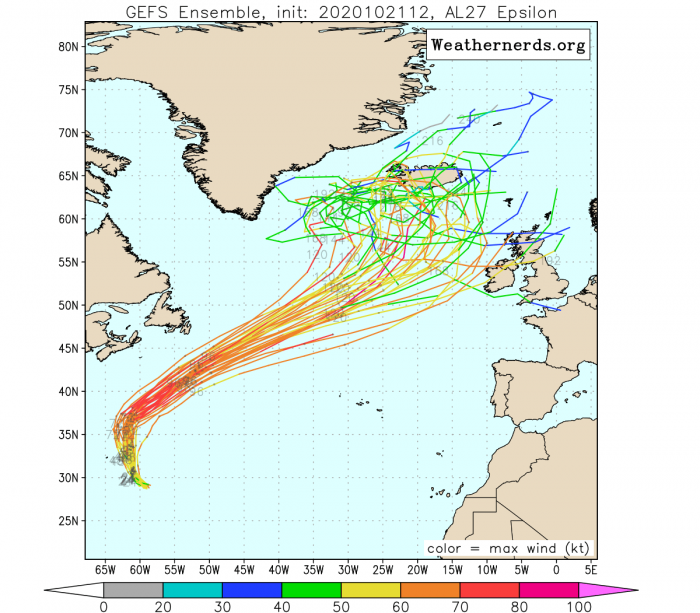 The evolution of the extratropical transition with Epsilon will be closely monitored over the coming days, we will keep you posted with updates. Chances are definitely increasing for a dangerous North Atlantic storm to develop, heading towards west-northwest Europe after the coming weekend.

RIP CURRENTS FOR THE EAST COAST AND FLORIDA

While Epsilon is far from the East Coast of the United States, it will also generate high swells and rough surf towards the East Coast. But there is another risk for the Atlantic coast this week – the coastal flooding and an increased rip current threat for the coasts of South Carolina, Georgia, and eastern Florida.

A strong high-pressure system forms across the eastern contiguous United States, leading to northeasterly onshore wind over the southeastern Atlantic coast this week. The large difference in surface pressure between this high-pressure system and an area of lower pressure to its south will strengthen the winds towards the coastal areas. 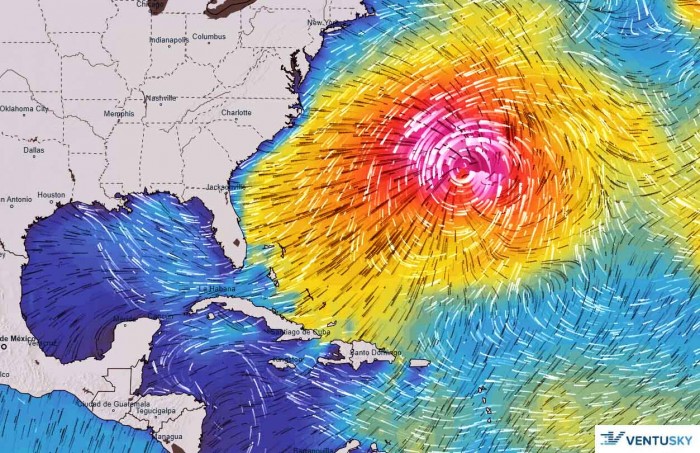 These winds will combine with high tides which should result in rising sea levels quite significantly for much of the Florida coast. Therefore, likely also leading to coastal flooding.

Coastal flooding has already been reported in the Florida Keys since Monday.

These conditions are expected to persist until the weekend when pressure difference vanishes and weakens the onshore winds. Coastal waters will then return to near-normal levels.

With the typical October occurrence, more westerly prevailing winds are forecast to develop across the central and eastern United States. This tends to keep any potential tropical systems away from the western parts of the Gulf of Mexico.

Such steering winds and circulations more likely lead to the formation of the tropical systems over the Caribbean, moving towards the Bahamas and Florida, and further along the East Coast of the United States.

And late October has a history of some powerful hurricanes, originating from the Caribbean region and moving towards the United States, e.g. Sandy (2012), Wilma (2005), or Mitch (1998).

The below map, based on the NHC past data, is showing where Atlantic named storms have formed over the second half of October (Oct 14th to 27th) during the satellite era (since 1966). It is an obvious fact that all the major hurricanes (Category 3 or greater) have formed in the central or western Caribbean Sea region. 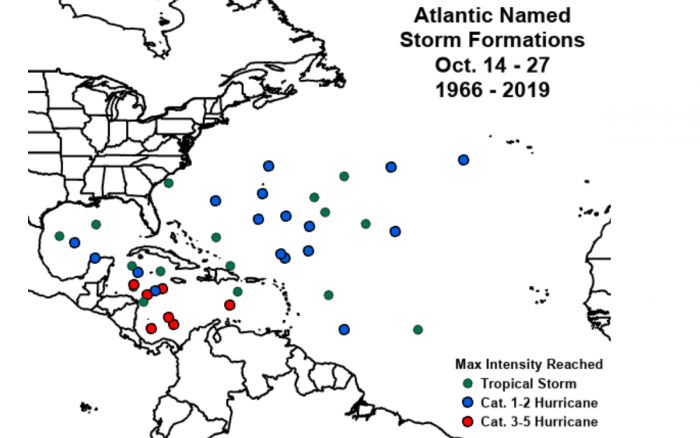 In 2020, the Western Caribbean region greatly fit into the statistics, as both Tropical Storm Gamma and Hurricane Delta originated in the Caribbean.

The average trajectory of the tropical systems tracks in October is towards the north and northeast. This puts Florida at risk of landfall if storms organize. Actually, the month of October is the statistical peak of tropical storm landfalls in Florida.

So a typical October brings storm tracks closer to land, from the western Caribbean Sea to the eastern Gulf of Mexico, Florida, and also the East Coast of the United States.

With the hurricane Epsilon now active, there is only one name left to align with the existing record of 6 Greek alphabets used in 2005. Tropical Storm Zeta was the last storm name that was designated by the National Hurricane Center in 2005, the only year using the Greek alphabet prior to the 2020 Atlantic hurricane season.

Based on the current statistics, the Atlantic hurricane season 2020 is only two named tropical storms away from the record of 28 named storms in 2005. For example, the 2005 season had eight (8) additional storms forming in October itself and a few more later, even past the official end of the season.

With potentially a few more storms forming in become the October is over and indeed in November, we are definitely aiming towards Nu or Xi storm names. That is halfway through the Greek Alphabet names.