After an unusually weak Ozone Hole last year, we have a beast of an Ozone Hole in 2020. The strong and cold stratospheric polar vortex has helped to power the ozone destruction process, keeping the ozone hole large and alive at high strength far into November.

Ozone is the protective layer in the atmosphere, that shields us from dangerous ultraviolet radiation. In the late 20th century, human emissions of chemical substances called halocarbons adversely affected the number of ozone molecules in the atmosphere. It resulted in the creation of dramatic annual ozone reduction over the Antarctic region. 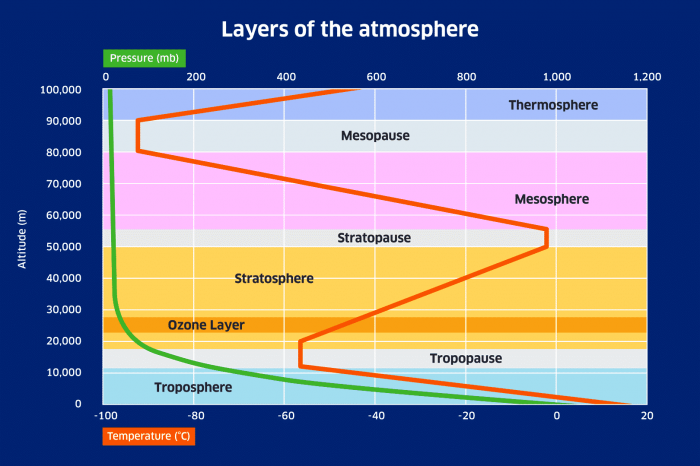 We produced a high-resolution video of the Ozone Hole spinning over the South Pole. We can see very impressive motion dynamics, which nicely show just how fluid the atmosphere really is.

But why is the ozone layer destroyed every year? If we want to destroy ozone and create and grow the ozone hole, we need two main ingredients: cold temperatures and sunlight. Cold temperature enables the stratospheric clouds to form. As long as it remains dark, nothing happens with these clouds.

When south polar spring arrives (Aug-Sept), UV radiation from the Sun reaches the Antarctic Circle and reacts with the stratospheric clouds. It starts a photochemical reaction of chlorine release and thus destroying the ozone in the process.

The theoretical threshold for stratospheric clouds to form is below -78°C (-108.4°F). The image below from NASA shows the minimum temperatures over the wide Antarctic circle at 50mb level (~19km altitude). The current minimum temperature is still at the threshold for polar stratospheric clouds (PSC) to form. That means it is cold enough to sustain the ozone destruction process. 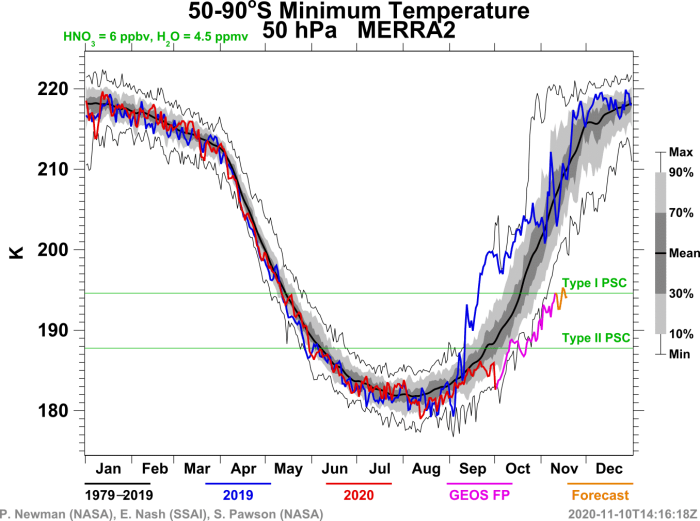 The Copernicus-ECMWF analysis of the south Polar stratosphere shows the current minimum temperatures compared to the past recent years. Just like on the previous image from NASA, we can see that the minimum temperatures are currently at record cold levels for this time of year.

Looking at the actual temperature analysis at the 50mb level, we can see the still powerful core of cold air over Antarctica. A large area of temperatures below -75°C is still present over the South Pole. 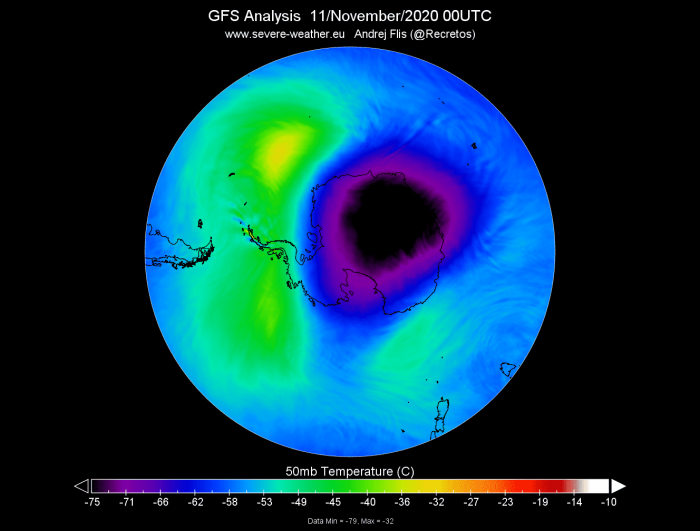 The average 50mb (19km) temperature over the South Polar Circle is much colder than normal for this time of year, running over 20°C colder than the long term average. 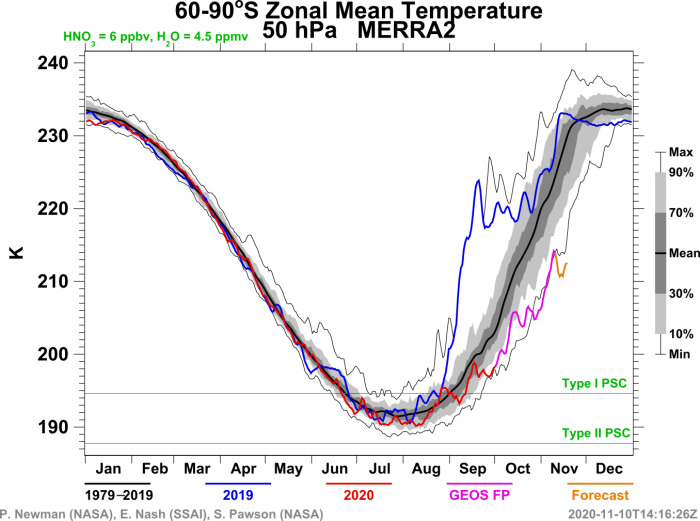 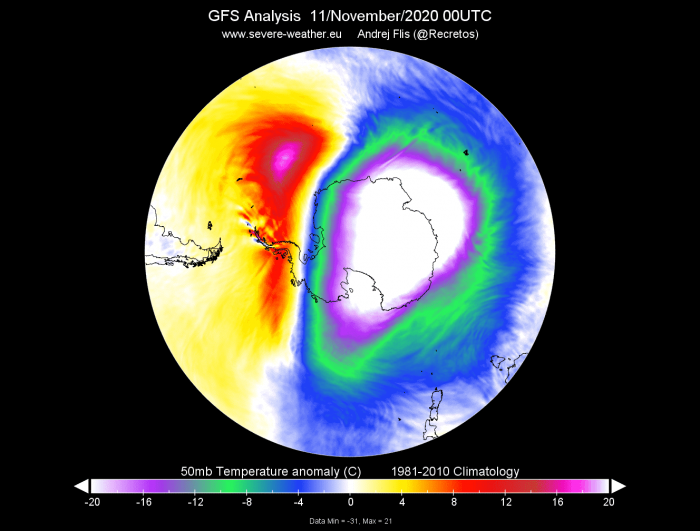 Comparing 2020 and 2019, we can see the unusual temperature deviation on the graph below for 2020. last year, this stratospheric level was running warmer than normal, just coming out of a sudden stratospheric warming event (SSW). 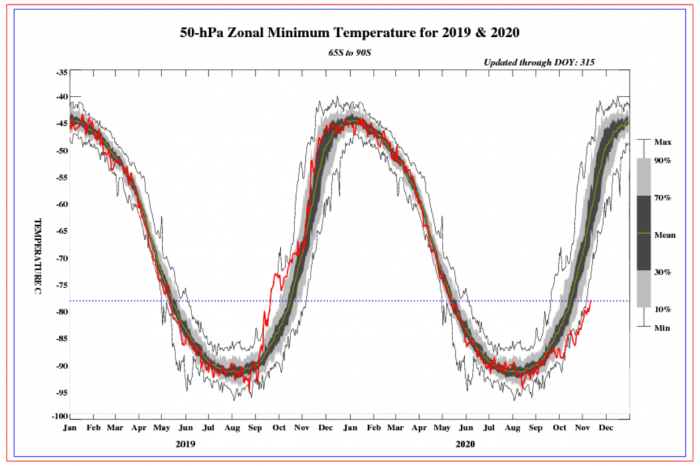 Looking at the stratosphere temperature anomaly for last year, we can see a completely different picture. The stratospheric warming event was an unusually strong one for the Southern Hemisphere. Temperatures in the stratosphere over Antarctica were pushed over 40°C above normal. This has had a strong impact on the ozone layer, as there were less stratospheric clouds and less ozone destruction. This event single-handedly stopped the growth of the ozone hole last year, keeping it smallest in at least the past 30 years. 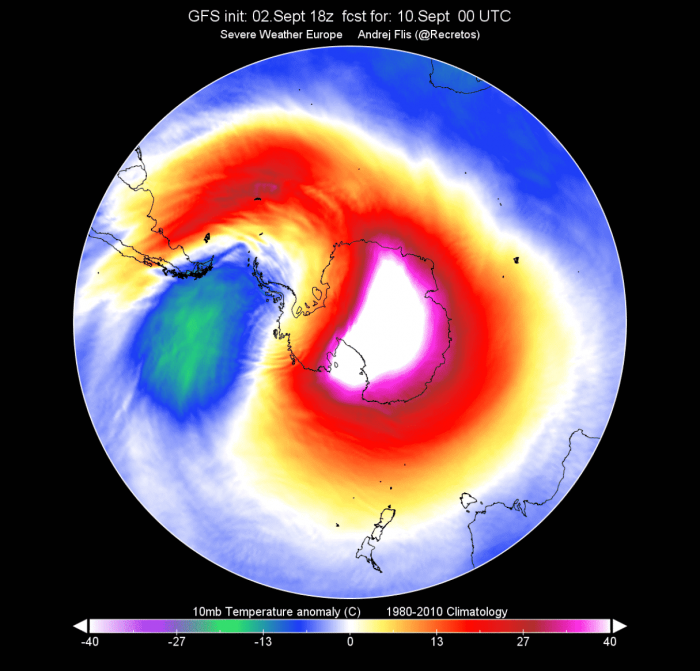 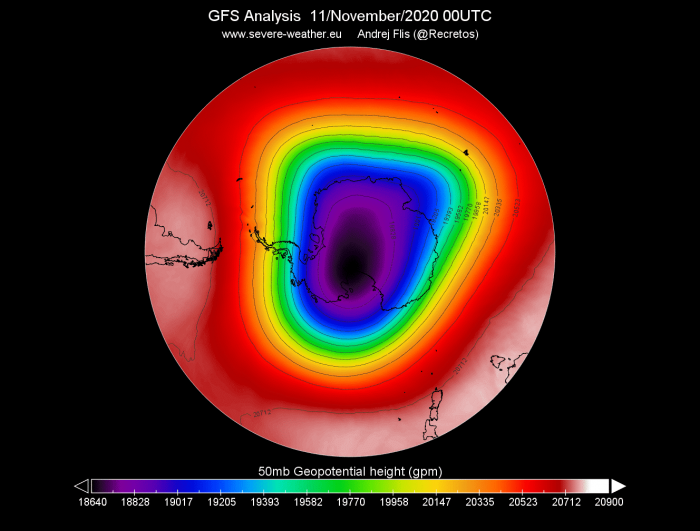 Geopotential height tells us at what altitude can we find a certain pressure, like 50mb in this case. In the image above, we can see that the 50mb level can be found between 18500-20000 meters over the South Pole. Lower altitude of a certain pressure level indicates lower pressure values and colder air at that altitude and area. 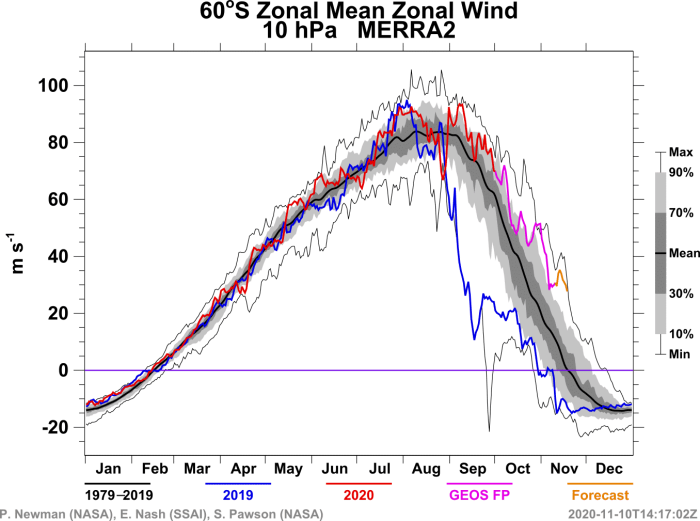 The reason the ozone hole is more circular in shape is that the main ozone destruction process happens inside the cold-core of the polar vortex. The polar vortex spins around like a large cyclonic area, usually having a very clean circular shape in nature over the Southern Hemisphere.

Now we know how the ozone is destroyed and how the ozone hole forms. The current analysis below shows the ozone values in the atmosphere over the Southern Hemisphere and reveals the huge ozone deficit over Antarctica. Usually, ozone values below 220 Dobson Units (DU) are used to determine the size of the Ozone Hole. 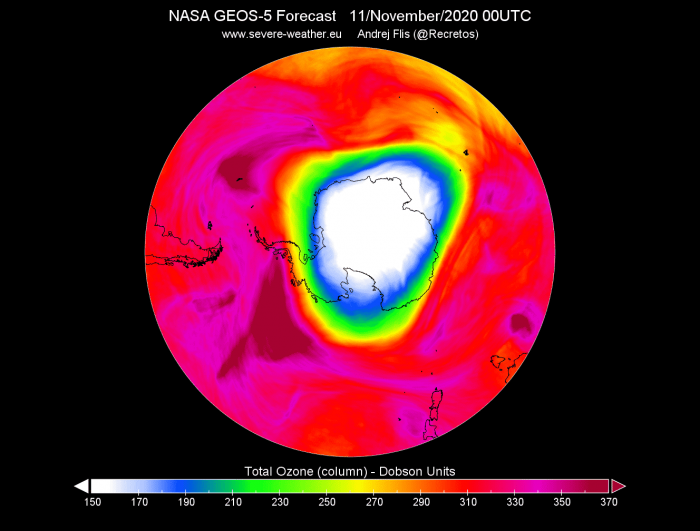 The image below shows the ozone hole area analysis by Copernicus-ECMWF. We can see that this year the ozone hole is very large and very persistent, keeping its size at stable levels into November, when in fact it should already be reducing. The current area of the ozone hole is more than twice the size of the continental United States.

At peak strength, the ozone hole can reach an area larger than North America (24million+ square kilometers). The purple line on the graph above, shows the values for last year, 2019. We can see just how small the ozone hole was, compared to now in 2020. It was severely weakened and limited by the stratospheric warming we mentioned earlier.

The ozone hole is usually largest in September/October. That is because of the most potent combination of high UV radiation and low temperatures. Towards the end of the year, the south polar stratosphere slowly warms as it goes towards summer. It is not cold enough anymore to destroy ozone, despite the abundant UV radiation.

Below we have a direct comparison of ozone values over the south pole on November 8th in 2019 (first image) and 2020 (second image). Yellow-orange colors mean more ozone and blue-violet colors mean less ozone. It is very obvious just how much larger and deeper the ozone hole is this year. 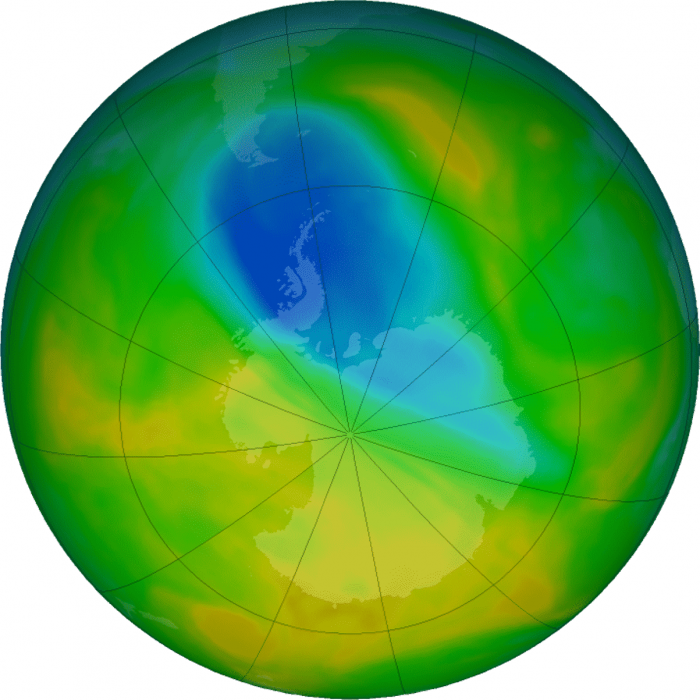 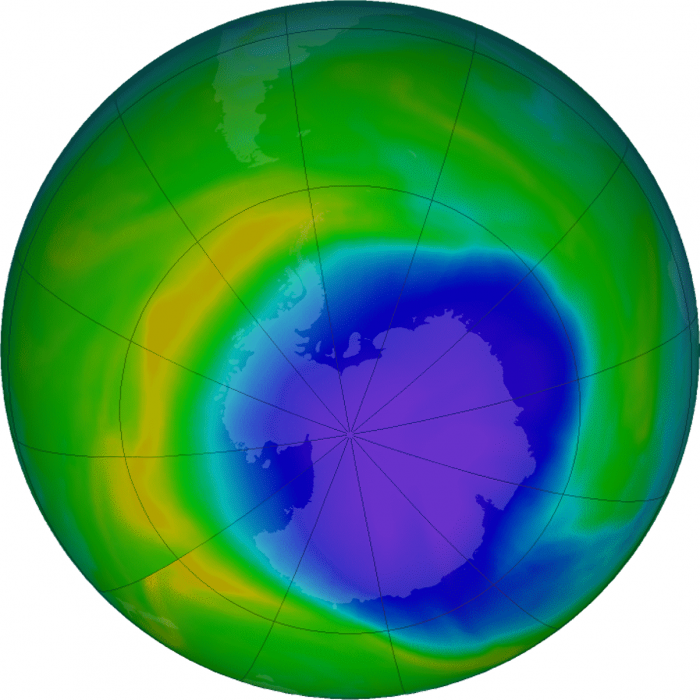 Looking at the minimum values of ozone over the South Pole, we can see unusually low ozone values compared to the last 17 years. This is a stark contrast to last year (purple line). The ozone hole this year has the lowest amount of core ozone for any Novmeber in known records. That is also seen in the second image by NASA, which shows the entire ozone hole record since it first showed signs of appearance in the late 1970s.

The ozone forecast by the NASA GEOS-5 model system shows that the ozone hole will persist into late November at similar strength. Tho it is showing slow recovery of ozone in its core, it will maintain a larger than the normal area for this time of year. 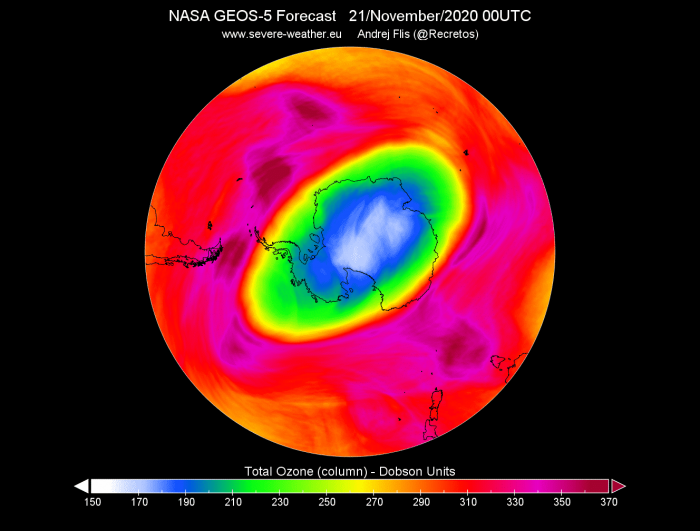 We will soon release our final Winter 2020/2021 model forecast, where the north polar stratosphere and the Polar vortex will also play a pivotal role, so stay check back regularly to Severe Weather Europe.