The active pattern over the northern Mediterranean and the Alpine region, which is expected to bring torrential rainfall and major floods, will also bring major snowfall to higher elevations in the Alps.

Total snowfall across the Alps in the next 5 days. ICON-EU model guidance. Map: Wxcharts.eu.

Snowfall first develops across the northwestern Alps on Saturday as northerly winds cause stau effect and snowfall to 1200-1600 m elevation, while Scirocco winds advect much warmer airmass along the southern flanks of the Alps in NW-N Italy and the snow limit remains above about 2400 m. This pattern remains in place also on Sunday and much of Monday, producing significant snowfall across western, northwestern and central Alps, but much less across the southern and eastern Alps. The peculiar pattern is caused by two successive surface lows over the NW Mediterranean: the first virtually stalls over the Balearic Islands on Saturday and Sunday, followed by rapid development of a new, deep surface cyclone over the western Mediterranean late on Sunday and Monday.

By Tuesday the thickest snow layer, locally likely well over 100 cm thick, is expected at higher elevations of western and central Alps. Snow will reach much lower in the northern Alps and even the Alpine foreland, possibly down to 1200-1400 m, maybe even lower. Warm, moist air advection in the southern Alps will push the snow limit much higher, likely well above 2000 m. The higher snow limit will also translate into rainfall higher up: extreme amounts, even up to 300-500 mm are expected, resulting in major flooding. 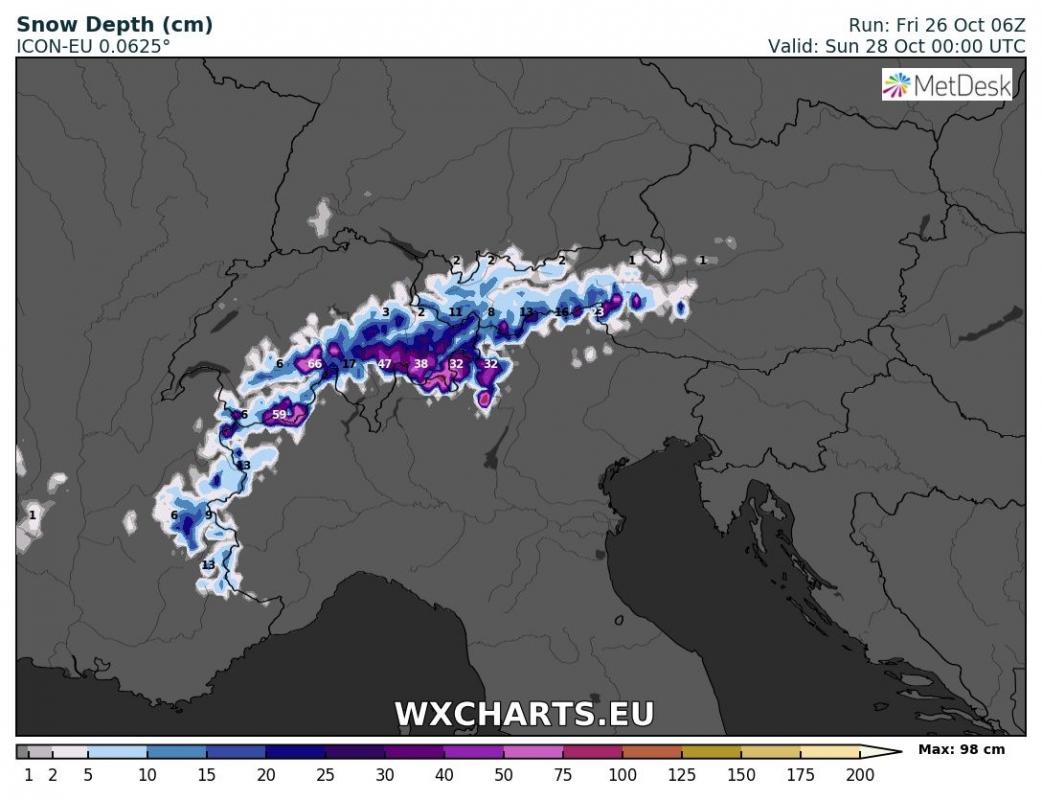 Total snow depth across the Alps in the by early on Monday. ICON-EU model guidance. Map: Wxcharts.eu. 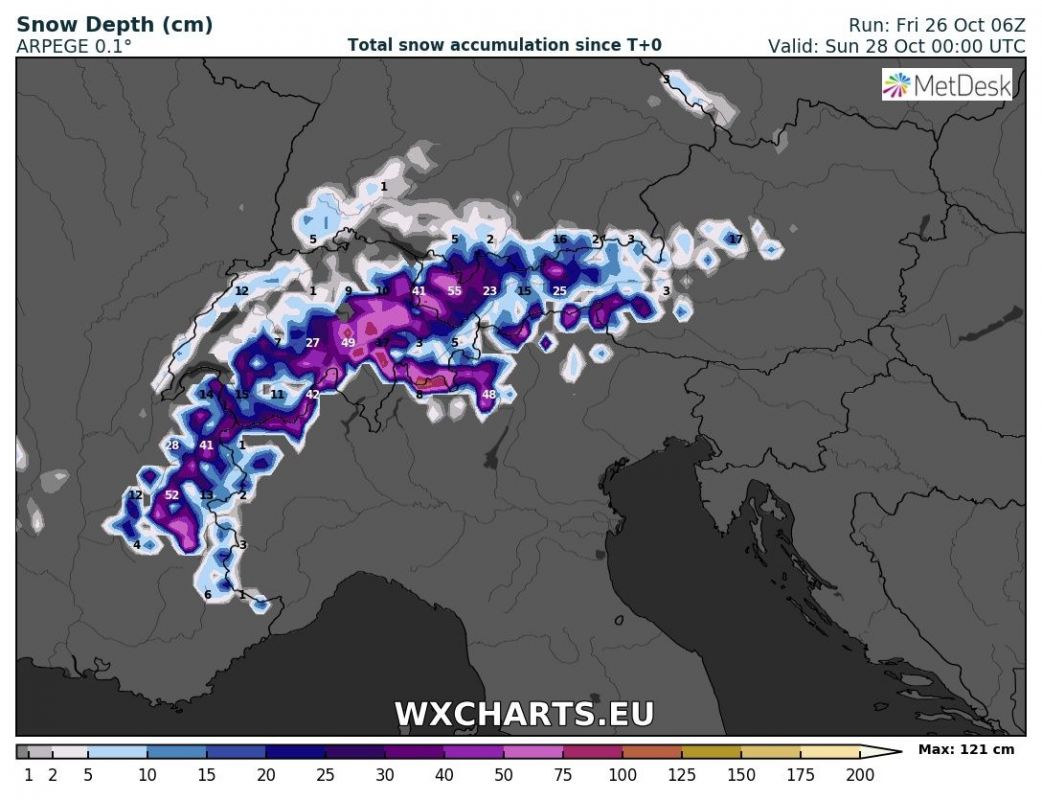 Total snow depth across the Alps in the by early on Monday. ARPEGE model guidance. Map: Wxcharts.eu. 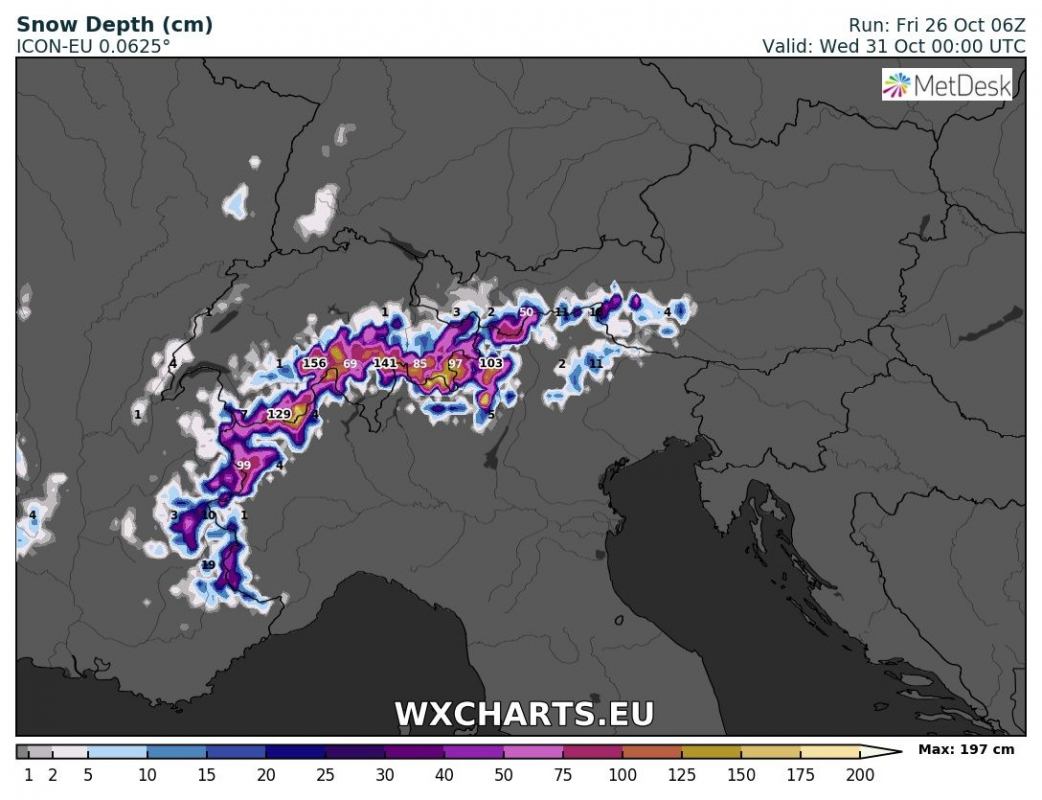 Total snow depth across the Alps in the by early on Wednesday. ICON-EU model guidance. Map: Wxcharts.eu. 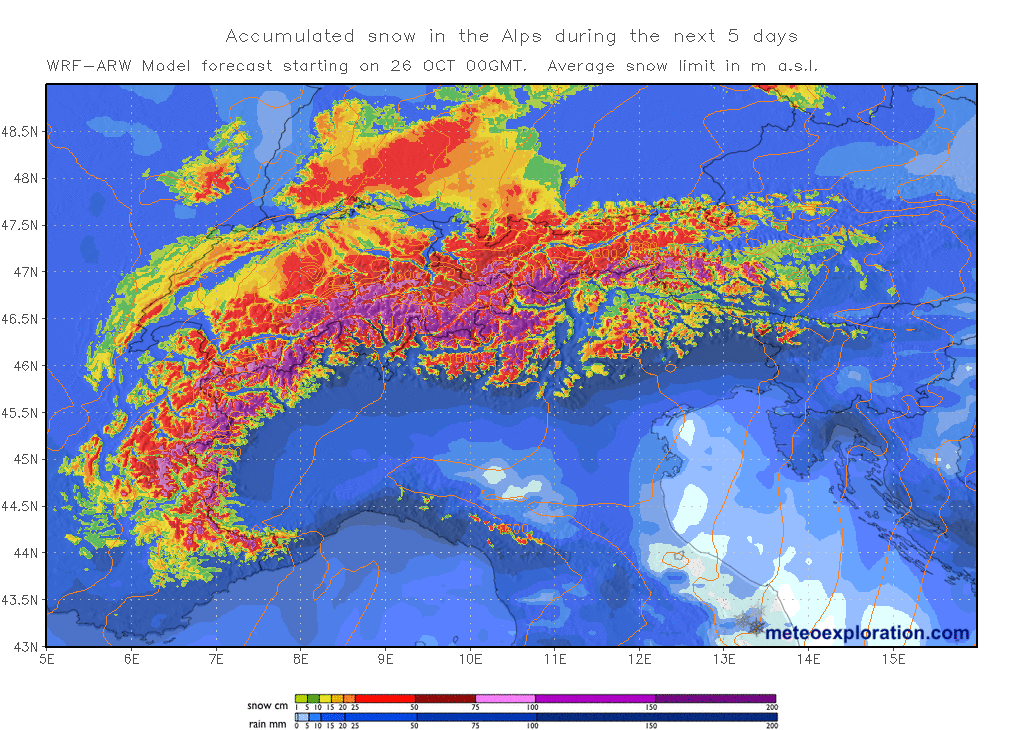 Total snowfall across the Alps over the next 5 days. Map: Meteoexploration.

Other results of the ongoing weather pattern over Europe: