A very active weather pattern is in place across the southern half of Europe. It supports very dynamic weather, with some regions receiving severe weather threats, including torrential rainfall, severe winds, severe thunderstorms and major rainfall.

It will result in all these events:

A very dynamic weather pattern is in place over the southern half of Europe: dominated by a large trough / upper low over southwestern Europe and a strengthening ridge over far eastern Europe. A strong baroclinic zone has established in between, over central and northern Mediterranean. 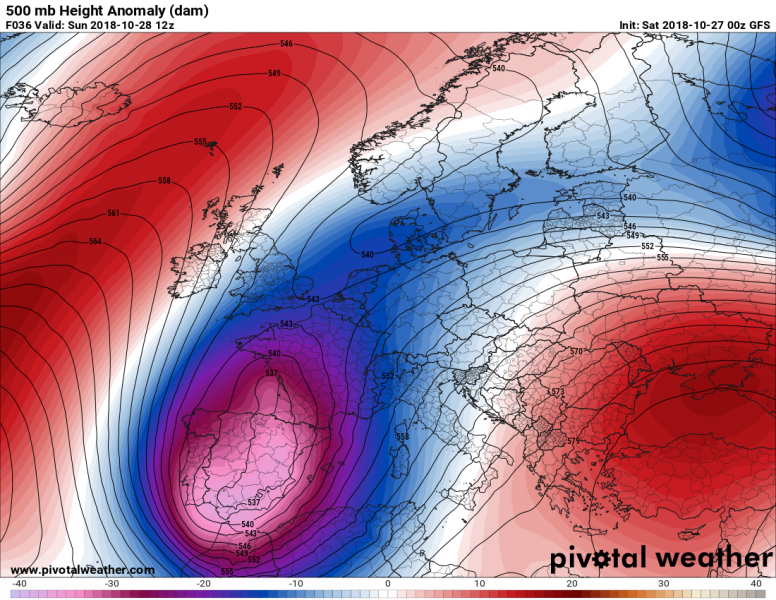 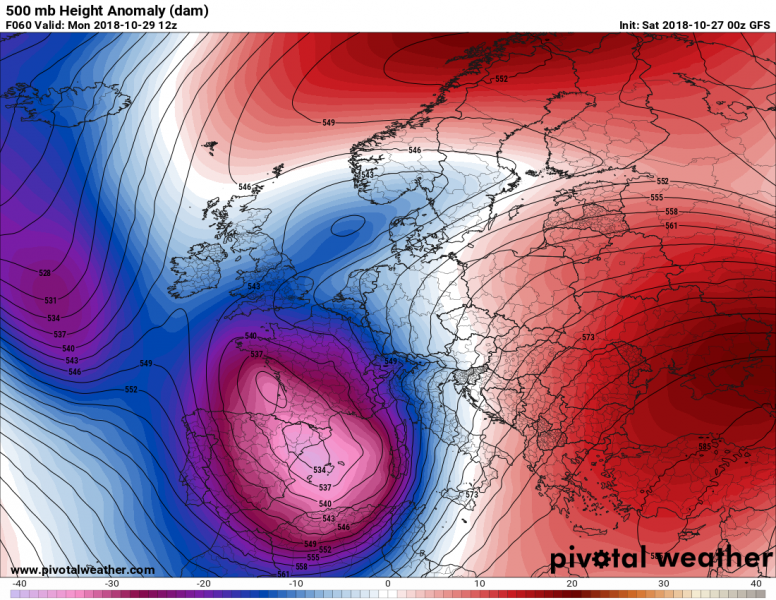 Under the large trough / cutoff upper low, a series of surface lows will develop. Two consecutive deep surface lows form in quick succession. A surface low develops over the extreme western Mediterranean and southeastern Spain by late on Saturday, reaching MSLP of about 092 mbar, moving northeast towards southern France by late on Sunday. A new surface low forms over the coast of Algeria by early on Monday and rapidly deepens and moves north towards the Ligurian sea by early on Monday, deepening to perhaps even below 990 mbar. It then ejects into central Europe, further deepening to possibly below 980 mbar. 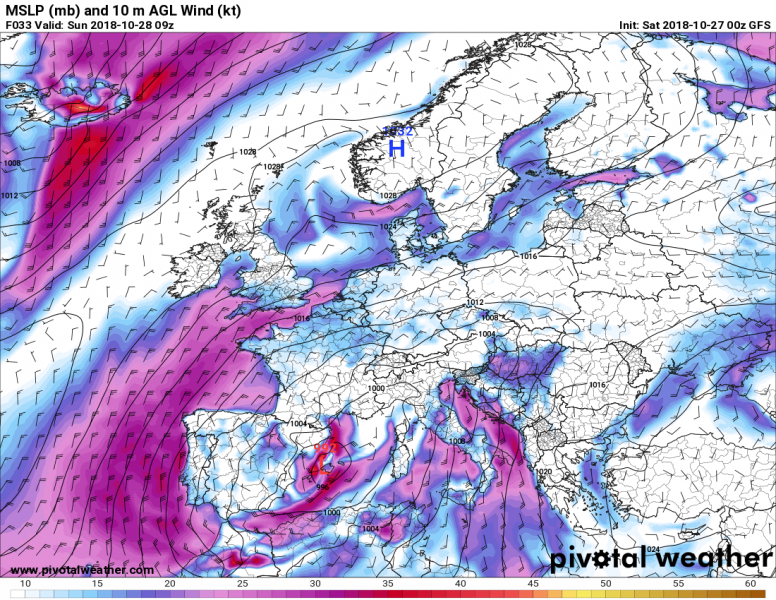 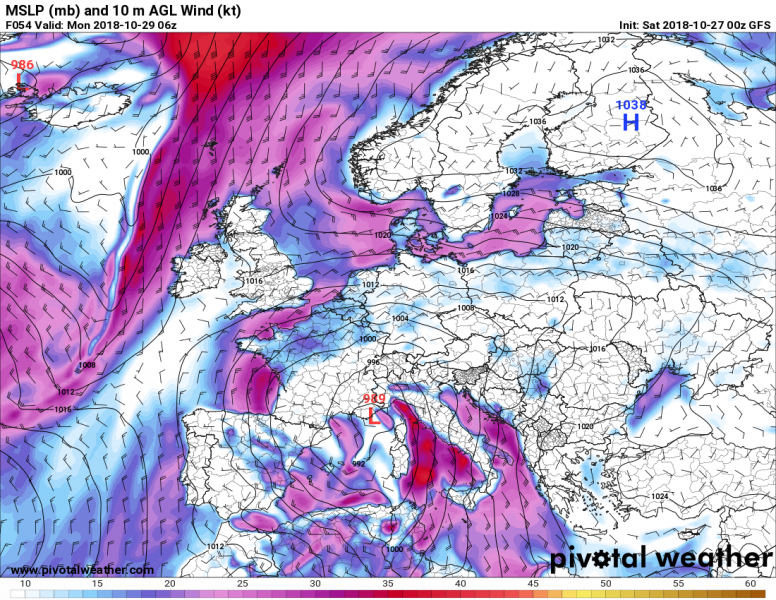 Successive surface lows over the Mediterranean between Saturday and Monday. Maps: Pivotal Weather.

Torrential rainfall and floods over the Alpine / northern Mediterranean region

In response to the deep surface lows, strong southerly and southeasterly Ostro and Scirocco winds will develop over central and northern Mediterranean (Ligurian, Tyrrhenian, Ionian and Adriatic seas). These winds will advect warm and very moist air towards the Alpine region. Convective and orographic rainfall will combine, producing locally over 300-500 mm of rainfall over the southern Alps, parts of the Apennines and the Dinarides by late on Monday. Major flooding is expected.

Heavy snowfall in the Alps at higher elevations

In addition, strong snowfall is expected at higher elevations along the southern and central Alps, caused by strong southerly winds advecting very moist airmass. On the other hand, in the northern sector of surface lows / upper lows, northerly winds will produce stau effect snowfall over western and northern Alps, with the snow limit much lower than on the southern side of the Alps.

The deep trough/upper low will be rounded by a strong jetstreak, with 60-80 kt southwesterly to southerly 500 mbar level winds overspreading the central and northern Mediterranean. They will combine with very strong surface southerlies and southeasterlies, producing an intensely sheared environment. Additionally, moderate to strong instability with 1000-3000 J/kg MLCAPE will build up across the region. The environment will be supportive for severe thunderstorms along frontal boundaries, low level/surace convergence zones and areas of intense upslope flow / orographic lift. The main threat with these storms will be torrential rainfall, in particular in areas where persistent convective lines with training cells will develop (Liguria, northern Adriatic region). Additionally, as strong low level shear will also be in place, tornado threat will be very significantly enhanced. 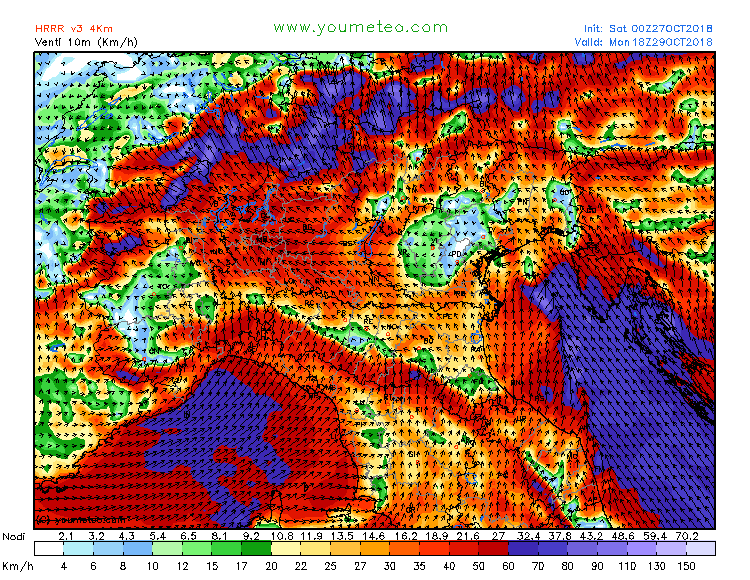 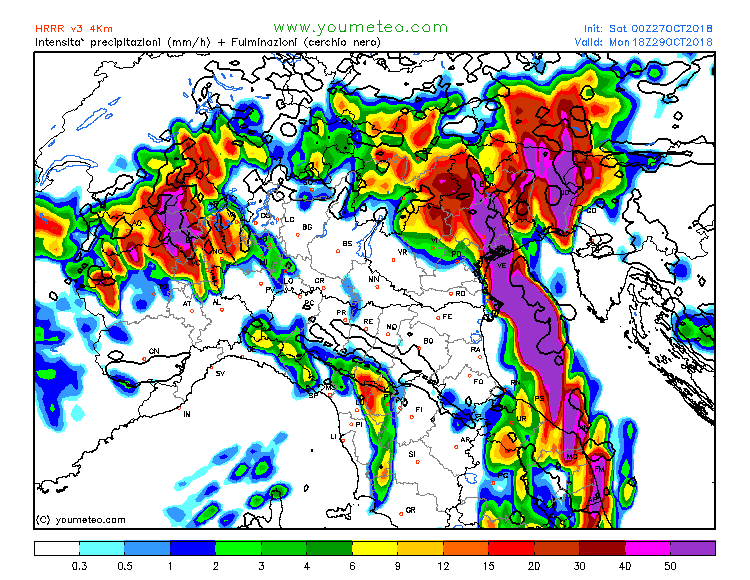 Surface winds and rainfall rate along the cold front over the northern Mediterranean / Adriatic late on Monday. Map: Youmeteo.com HRRR. 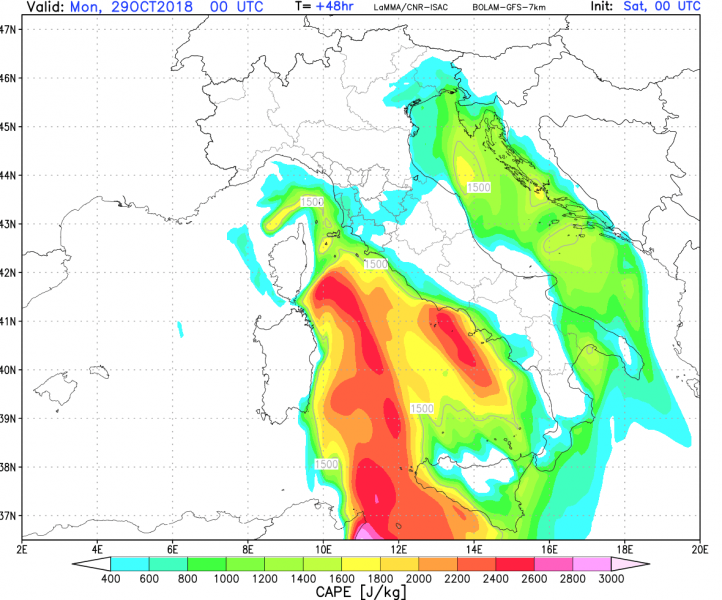 CAPE across the Mediterranean early on Monday. Map: Consorzio LaMMA.

Intense windstorm and major waves in parts of the Mediterranean

Scirroco winds will reach severe threshold across parts of the Tyrrhenian sea and in particular across the Adriatic sea. Gusts up to 90-120 km/h are expected. Additionally, strong Mistral is expected over the NW Mediterranean and the Balearic Islands on Sunday. 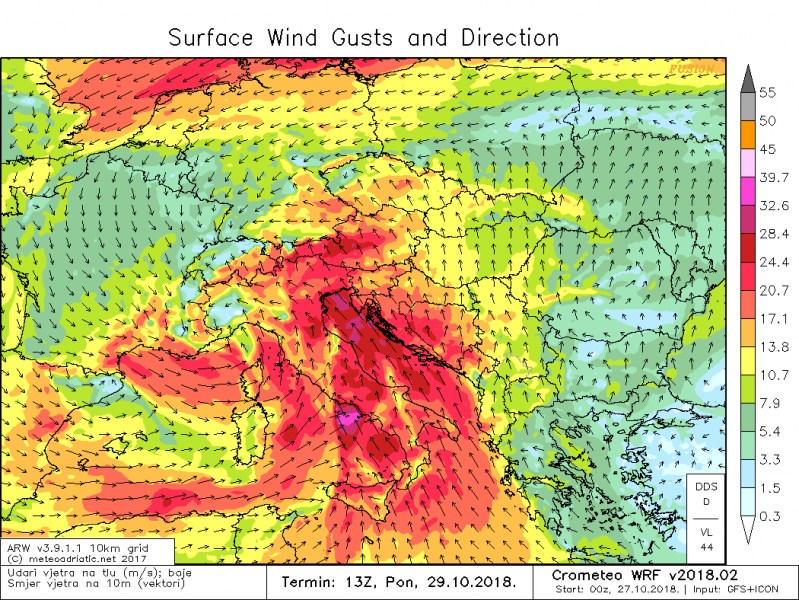 Large waves with 4-6 m significant height are expected across parts of the western Mediterranean, the Tyrrhenian and Adriatic sea on Sunday and Monday. 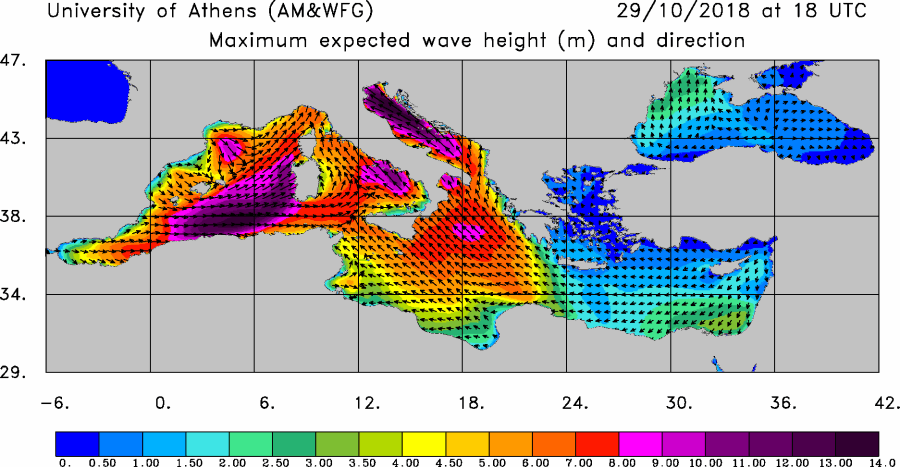 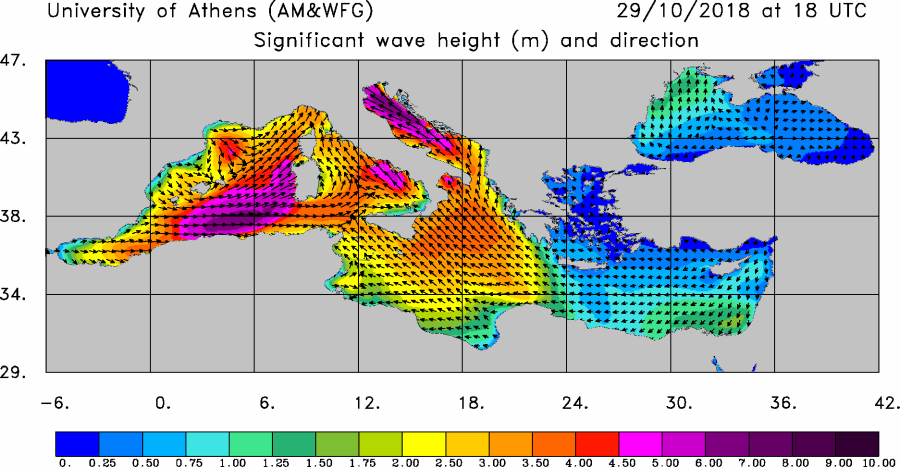 Maximum and significant wave height across the Mediterranean late on Monday. Maps: University of Athens (AM&WFG).

Saharan dust pushed into the Mediterranean

The strong southerly winds will also advect major amounts of dust from Sahara / northern Africa. While significant dust advection is expected throughout the weekend and early next week, a major dust load is expected to move into the central Mediterranean on Monday. 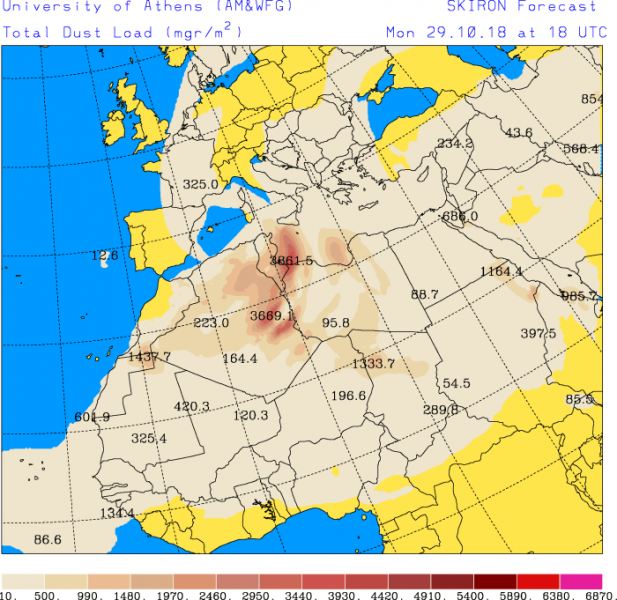 See details on individual parts/aspects of the setup: