A major, magnitude 6.8 earthquake hit the Ionian sea, just off the western coast of Greece at 22:54 UTC last night, October 25/26. The event caused major ground shaking on islands in the Ionian sea and mainland Greece. It was felt as far away as central Italy and northern Bosnia and Herzegovina.. We take a look at first details and how this earthquake compares to other historic earthquakes in Greece. 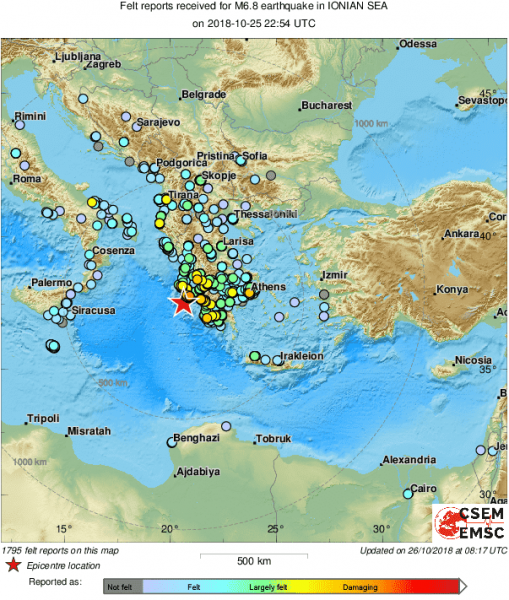 Intensity map, based on reports received by the EMSC. Map: EMSC.

The earthquake epicenter was located approximately 38 km southwest of Zakynthos island in the Ionian sea. Preliminary data suggests a moderately deep hypocenter at 10-17 km depth. We have received numerous reports from Zakynthos island and western Greece, describing strong ground shaking, rattling of windows and furniture, but rather limited damage. Many report three earthquakes: a preceding magnitude 5.0 event at 22:22:54 UTC, followed by the main shock (Mw 6.8) at 22:54:51 and a magnitude 5.2 aftershock at 23:09:21. Another 5.0 aftershock happened at 01:06:04 and a 5.1 at 5:48:37.

Also minor tsunami was recorded, with a wave height of about 10 cm.

How does this earthquake compare to others in the region? Let us take a look.

As big as they get in Greece?

On August 12, 1956 the Dodecanese Islands were hit by a magnitude 7.7 earthquake. It produced violent (maximum intensity IX) ground shaking, 53 casualties and a large tsunami. It was followed 13 minutes later by a magnitude 7.2 shock near Santorini Island. A magnitude 7.9 earthquake hit the same general area as yesterday on February 4, 1867, destroying 8000 homes and producing a major tsunami.

Epicenters of last night’s earthquake and the two largest recorded earthquakes in Greece.

The largest known earthquake in Greece is the 365 Crete [megathrust] earthquake. It happened on July 21, 365 at sunrise. It ruptured several hundred kilometers of the Hellenic subduction zone, reaching magnitude above 8.5! The earthquake produce extreme (intensity XI) ground shaking. It destroyed virtually all towns on Crete island. It also produced a very large tsunami, which hit much of the Mediterranean: in particular coasts of Libya and Egypt. In the Nile delta ships were carried 3 km inland by the tsunami. The number of casualties is unknown, vertainly many thousands. The entire western part of Crete uplifted by up to 9 m. You can actually see traces of this enormous earthquake in the landscape even almost two thousand years later: the wave cut notch along the rocky coast is meters above the current sea level, uplifted by the earthquake. 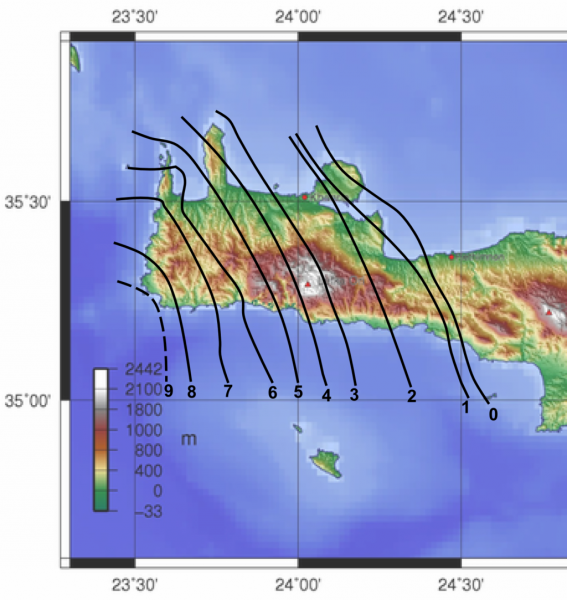 Surface uplift on western Crete during the 365 Crete earthquake. Contours modified after Flemming 1978, quoted in Stiros 2010.