Europe will be facing a significant pattern chance this weekend. A strong ridge dominates the north Atlantic and western Europe while an outbreak of cold airmass is moving across the southern Balkan peninsula and Black sea today. The pattern flips tomorrow when the Atlantic ridge collapses and an Arctic outbreak develops across the western Europe and pushes south into Iberian peninsula, western Mediterranean and northwest Africa. Ahead of this Arctic trough, a strong warm advection pushes across the Balkans and eastern Europe, while in between a dangerous flooding event establishes across the northern Mediterranean region.

The pattern change starts with a weakening of the north Atlantic ridge as a strong trough enters from the Arctic region. To the east, the very deep trough in place across the ESE Europe ejects into SW Russia while ridging strengthens over the Mediterranean. Very cold weather finally crosses Turkey and enters the Middle East, while much warmer airmass returns into central Europe again.

The pattern flip is getting into its second stage as the trough over the western and northern Europe significantly deepens and accelerates an Arctic front across western Europe towards the south. The very cold airmass rapidly advects across UK, France and towards the Iberian peninsula. Ahead of the trough, the ridge moves towards Balkan peninsula and strong warm advection begins there.

The deep trough moves over the Iberian peninsula, deepens and also bring some significant snowfall into parts of N Spain and Pyrenees. Very cold Arctic airmass continues spreading across the Iberian peninsula and enters the western Mediterranean and NW Africa as well. The upper ridge over Balkan peninsula strengthens, with very warm airmass in place there. In between, heavy orographic and convective rainfall establishes over the northern Mediterranean region and the Alps.

The pattern remains very similar to the day before. The deep trough over SW Europe transforms into a large and deep upper / cold core low. Very cold Arctic airmass continues spreading into Morocco and Algeria, bringing snowfall into the mountainous terrain. Extreme warmth with afternoon temperatures in mid/upper 20s (!!) persists over the central Balkans. Intense rainfall event with high risk for flooding persists over the southern Alpine flank. 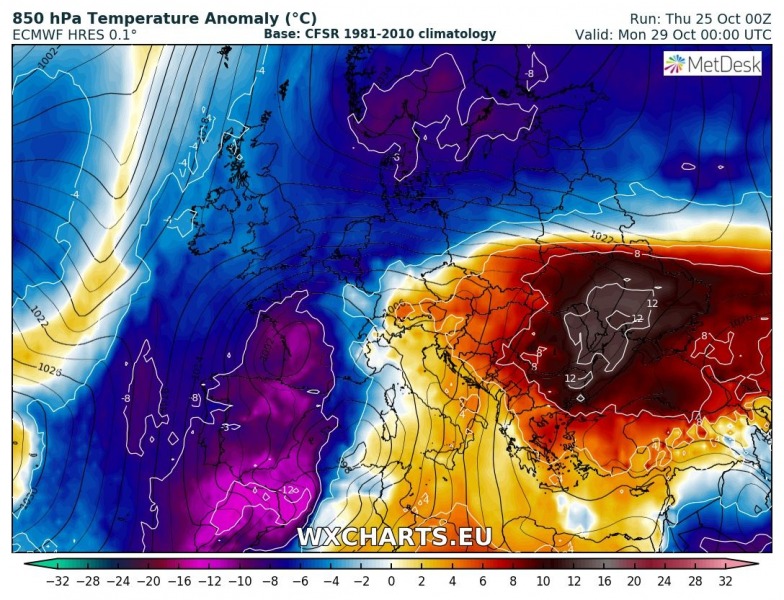 Please refer to the mesoscale dicsussion regarding the dangerous excessive rainfall and flooding threat across the northern Mediterranean here:

The deep trough over the SW Europe strengthens further on Tuesday, expanding towards the north as well. This will maintain very cold weather across the Iberian peninsula and NW Africa, as well as strong persisting southerlies towards the northern Mediterranean. To the east, the ridge over Balkan peninsula and eastern Europe strengthens as well. In addition, a strong ridge also develop over the far northern Europe. A very sharp and large temperature difference will form between western and eastern Europe, where eastern Europe will likely experience daily average temperatures 10-12 °C above normal for the last days of October.

Similar pattern is likely to continue into the early November with ridging across the east/northeast Europe and deep troughs over the west and southwest Europe. The result will be unusually warm weather across the east-central Europe as well as parts of Mediterranean and Balkan peninsula.

We are closely monitoring the evolution of the pattern change and will keep you updated – stay tuned!