We are currently experiencing an unusually strong cold outbreak over a large part of Europe. But it appears likely we will be facing a second heatwave into our continent soon. Extreme heat is expected across southern Balkans and Turkey this weekend. Maximum afternoon temperatures will reach 35-40 °C over Greece and Turkey from Friday to Tuesday!

Soon after the existing deep trough over the northern and eastern Europe diminishes, an upper ridge intensifies over the south and southeast Europe. An upper low placed to the west of the ridge will introduce a good source of warm air mass advection from north Africa into the Mediterranean and further north and east into south Balkans and Turkey. 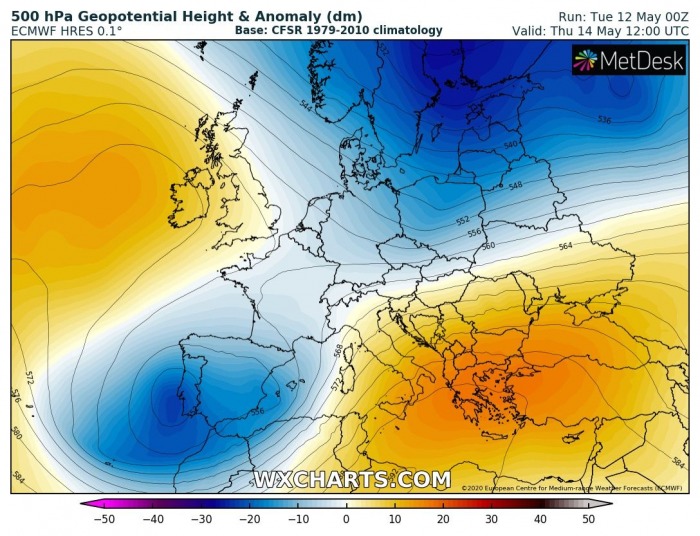 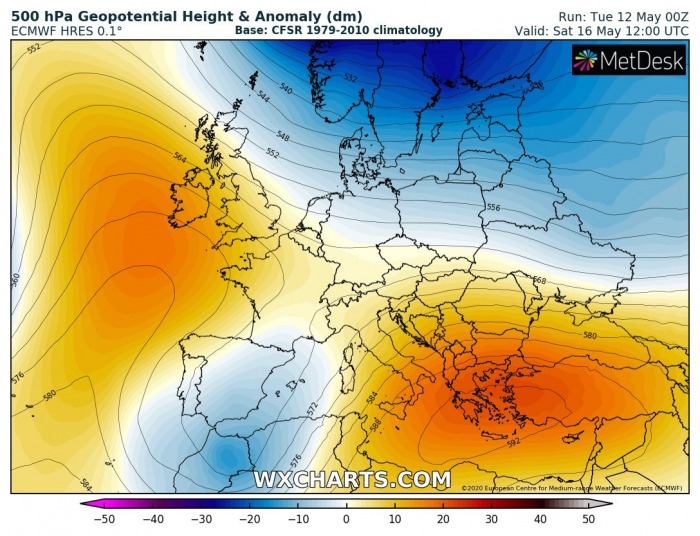 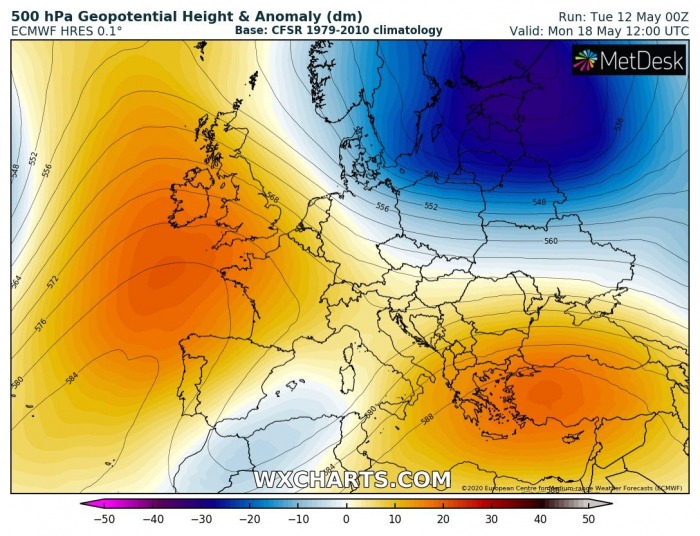 Here is impressive imagery of 850 mbar (approx. 1500 meter above sea level) temperature anomalies over Europe this weekend into early next week. A huge cold pool associated with the latest cold outbreak over east-central Europe, while extremely warm air mass advection takes place over southeast parts of the continent. 12-16 °C warmer weather than normal develops under the upper ridge. 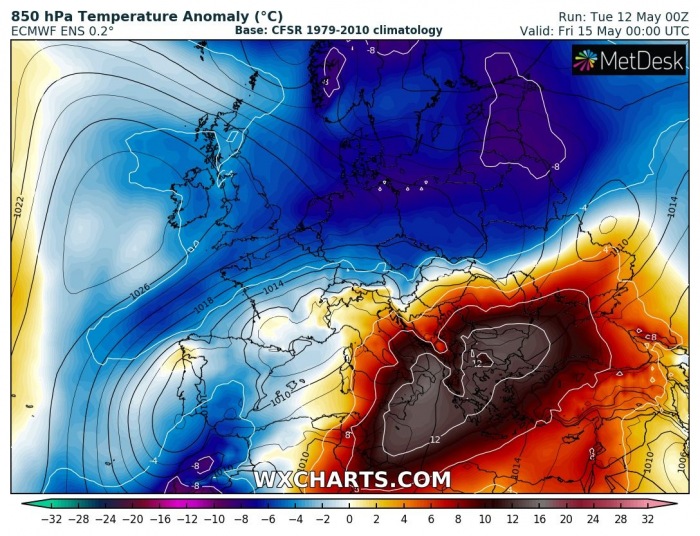 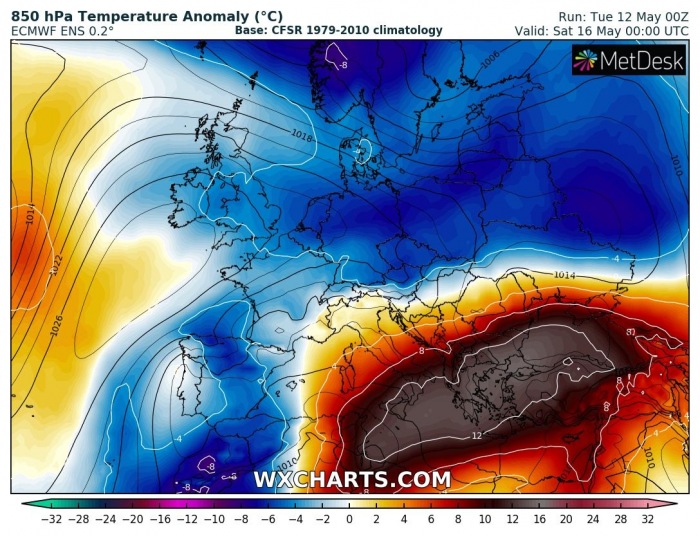 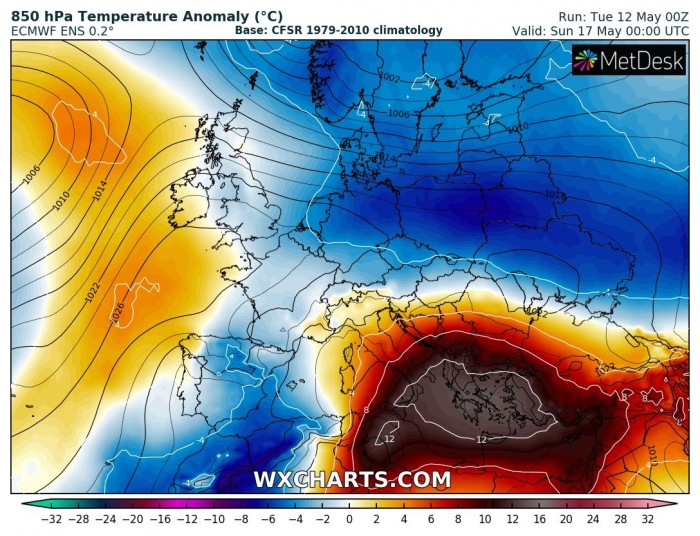 The 2-meter temperature anomaly is also very extreme! While a large part of Europe should see colder weather until the end of this week, a strong heat spreads over south-southeast Europe. The daily temperatures will be more than 15 °C warmer than normal in some parts! That’s quite remarkable to say at least, leading into extreme heat close to 40 °C locally! 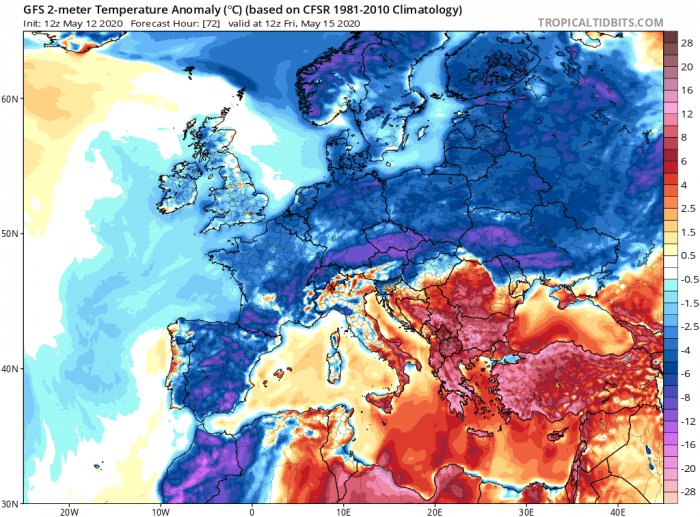 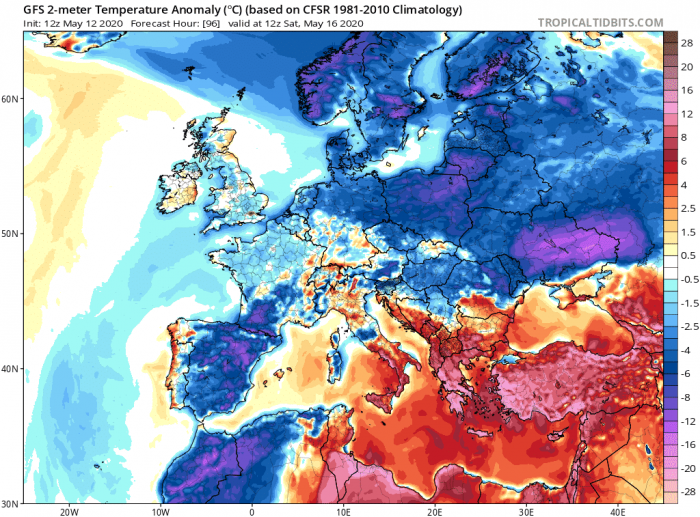 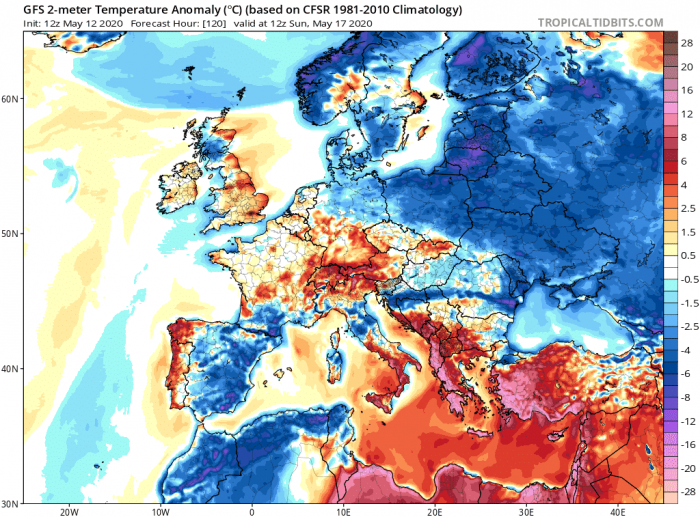 Extreme heat above 35 °C over the weekend

Italy and the Balkans

The heatwave first develops over Italy & southern Balkans on Thursday and Friday. It will likely bring low to mid-30s over south Italy, Serbia, Romania, and Bulgaria, as well as North Macedonia and Albania. Further south over Greece, temperatures are likely to reach the upper 30s on Friday. Some cooling mixes the heat down over central Balkans during the weekend, but heat intensifies to the south. It seems that peak afternoon temperatures will remain in the 35-40 °C over Greece from Friday to Monday: 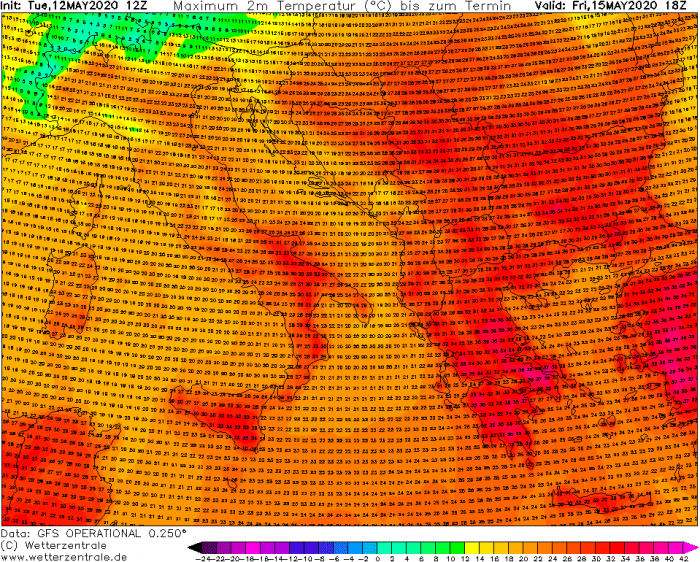 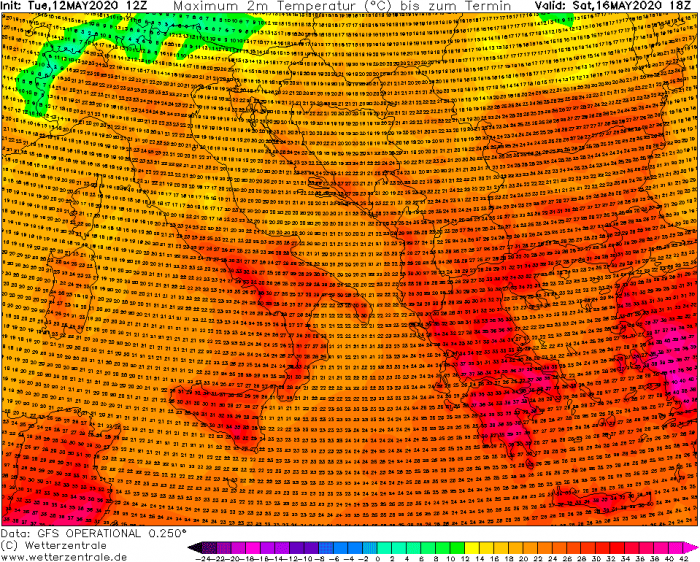 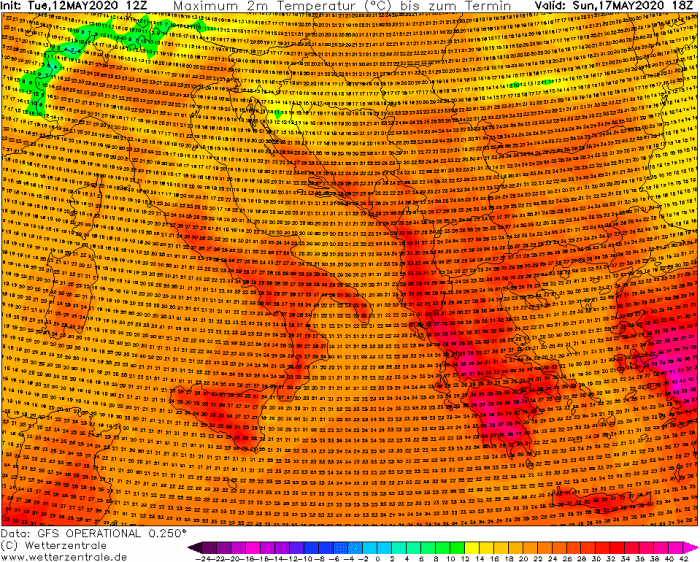 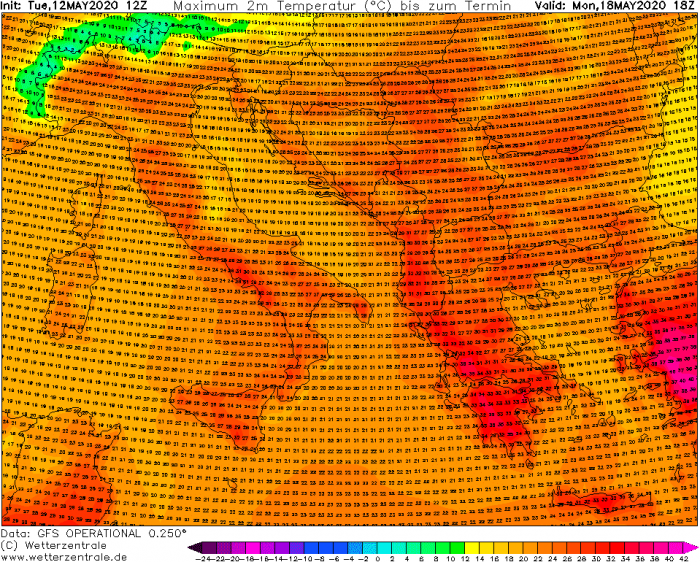 The peak afternoon temperatures across Turkey over the weekend into early next week. The heat intensifies on Friday which should already bring temperatures into the mid to upper 30s across the south and west parts of the country. Over the weekend, heat becomes even more extreme. There is a potential that afternoon temperatures could even climb into low 40s °C! Depends on the local winds, the downslope winds could result in the very dry air mass. Therefore supporting the high heat to develop. Models suggest the heatwave should extend into early/mid next week and gradually diminish then after. 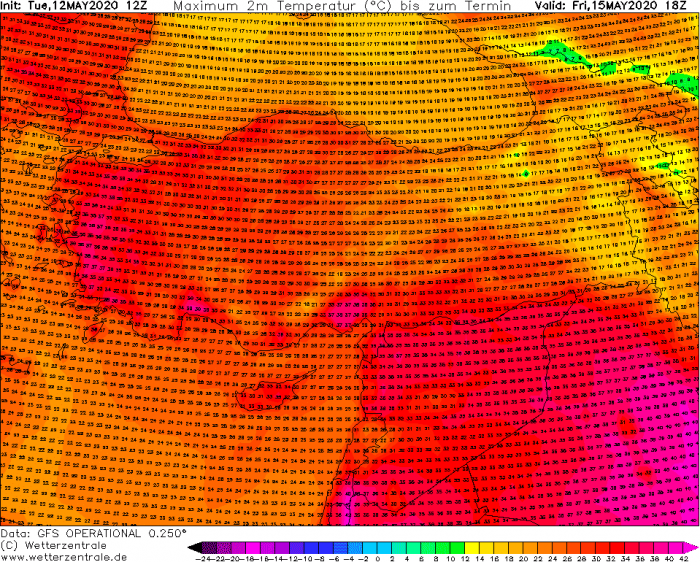 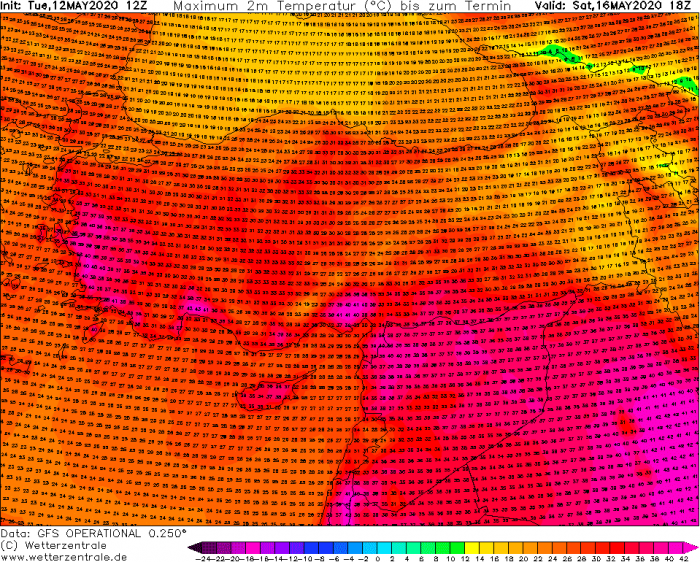 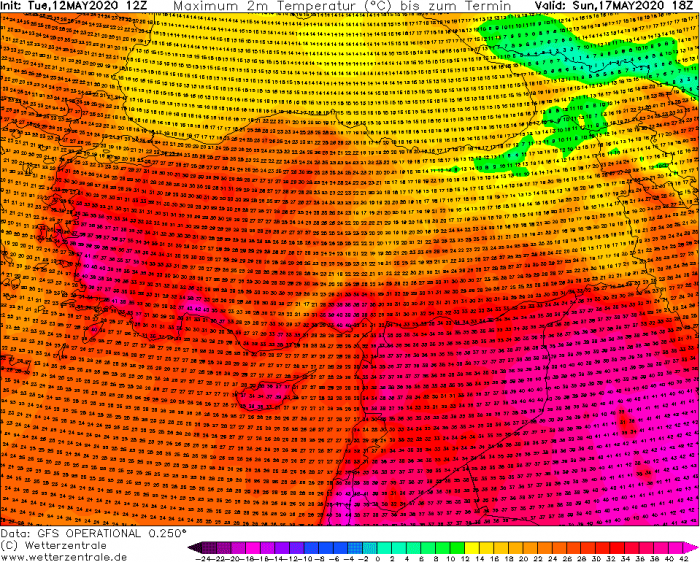 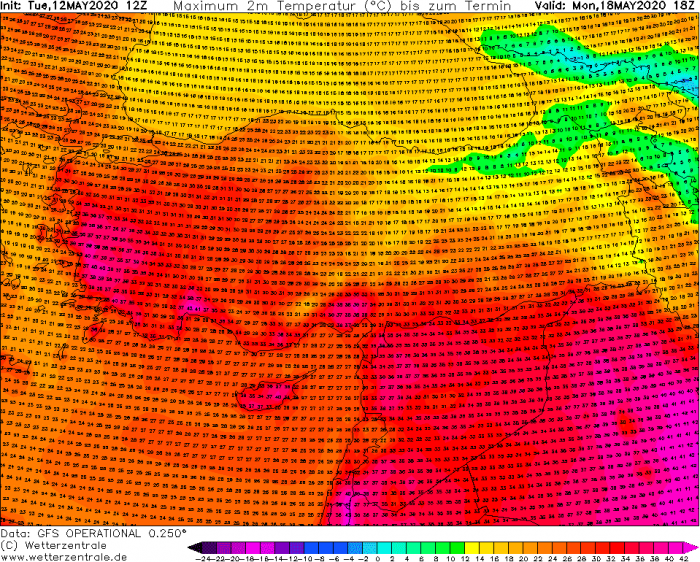