In parts of the Northern Hemisphere, the period from May 10th and 15th is often believed to bring a brief spell of colder weather in many years through the past centuries. These are often reports of a marked cold snap over the days of the Ice Saints (May 11-13th). It seems that we will face an intense Arctic outbreak right for the Ice Saints days this year. The foreseen pattern will bring significantly colder air mass across a large part of Europe.

The three Ice Saints are St. Mamertus (or, in some countries, St. Boniface of Tarsus), St. Pancras, and St. Servatius. They are so named because their feast days fall on the days of May 11th, May 12th, and May 13th respectively.

The establishing pattern during the second half of this week will develop a quite strong upper-level ridge over the North Atlantic and Greenland, with a deep long-wave trough to its east – over northern Europe (Scandinavia), digging south through Sunday. The upper trough strengthens and expands through early next week over the north-northeast Europe, providing strong meridional northerly flow against the North Atlantic ridge. 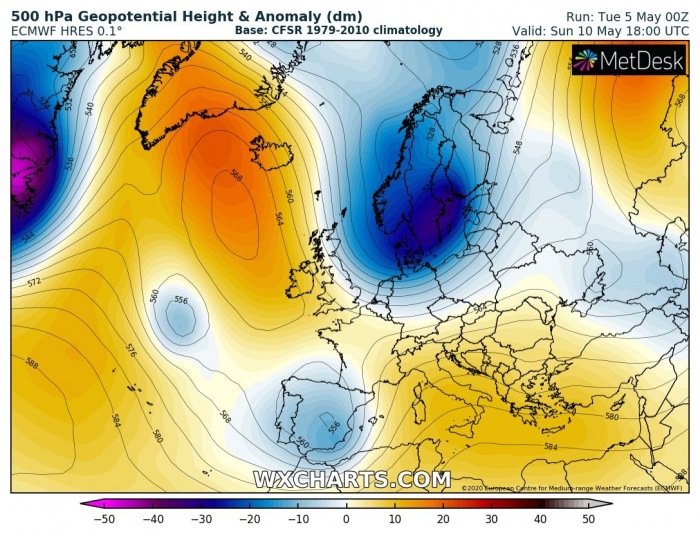 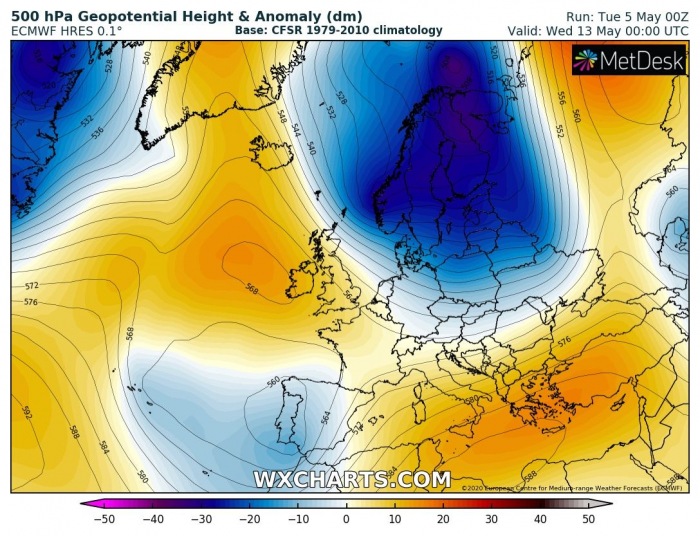 The very impressive temperature anomaly of this Arctic outbreak is perfectly visible on the 850 mbar (approximately 1500 m ASL) level, being trapped between high-pressure system over the North Atlantic and surface cyclone over Scandinavia. This establishes a textbook advection of very cold air mass from the Arctic region! The cold pool blasts across the northern half of Europe through late Sunday, becoming particularly extreme on Monday and Tuesday. With an establishing surface high-pressure system over western Europe on Tuesday, cold pool continues deep south into the northern Mediterranean and the Balkans on late Tuesday and Wednesday. 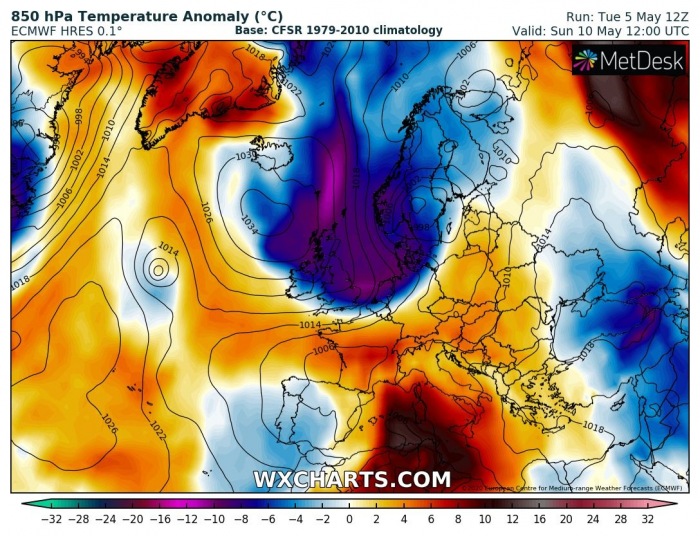 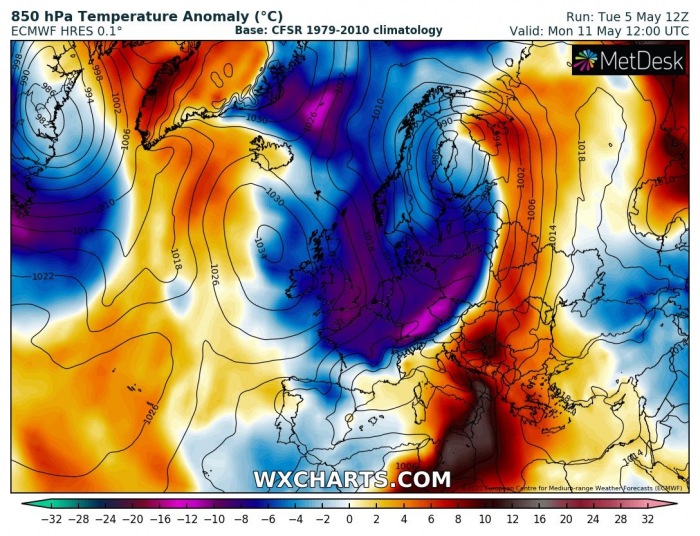 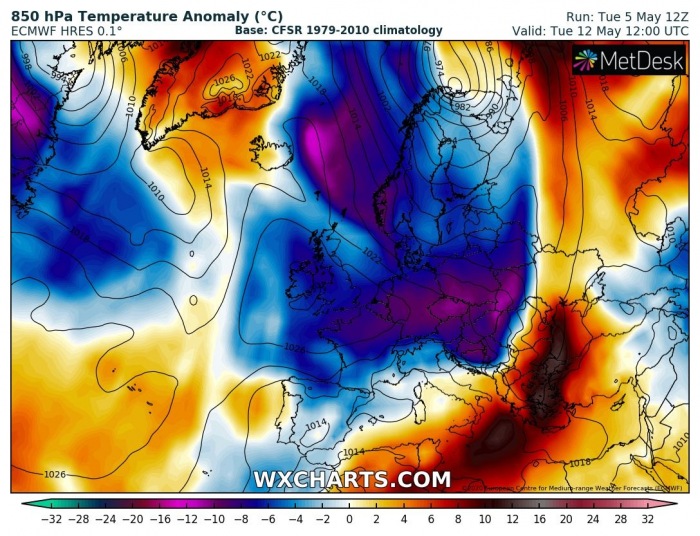 Looking over the 2m temperature anomalies, we can see a much colder air mass spreads across northern and western Europe on Sunday, continues and intensifies on Monday when it reached central and eastern Europe as well. *much* colder weather will spread towards the Alps late Monday into Tuesday, with very cold wind chills for early May! On Tuesday morning, temperatures will be even more than 12 °C colder than the long-term average for this period. Surely well-aligned with the famous Ice Saints from 11th to 13th of May! 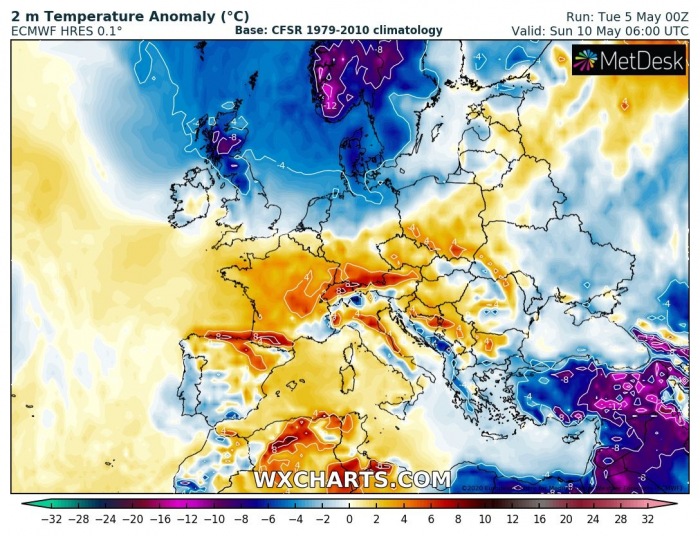 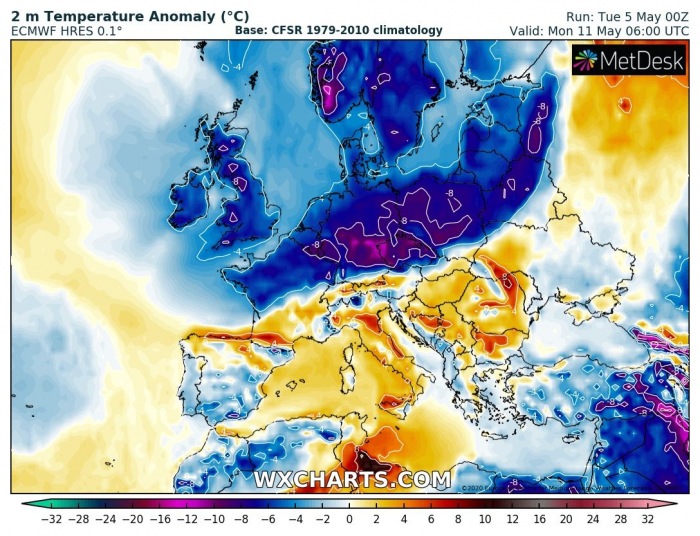 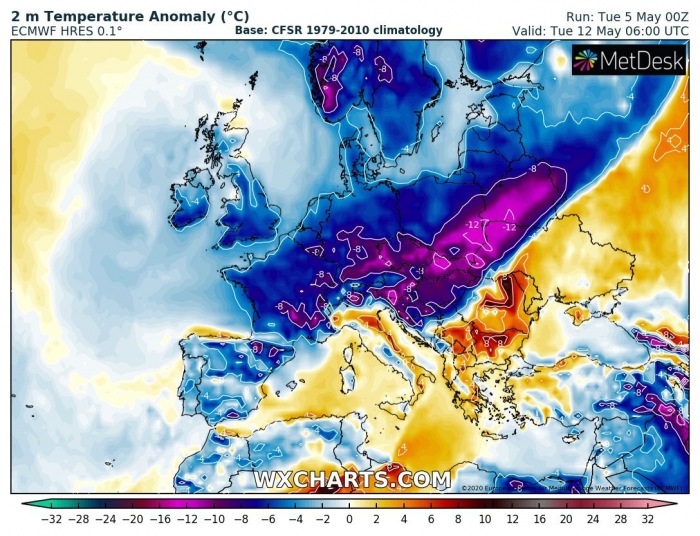 Actually, there is also some snowfall potential developing with this significant cold blast. Attached are GFS model probability maps through Monday and early Tuesday. There is 50-75% of falling snow across the southern Scandinavia, the Baltic region, and also into parts of Germany, Czechia, Slovakia, and Poland on Monday. Overnight to Tuesday, when cold blast pushes further south, snowfall could also occur across eastern Europe, e.g. Ukraine and northern Romania. 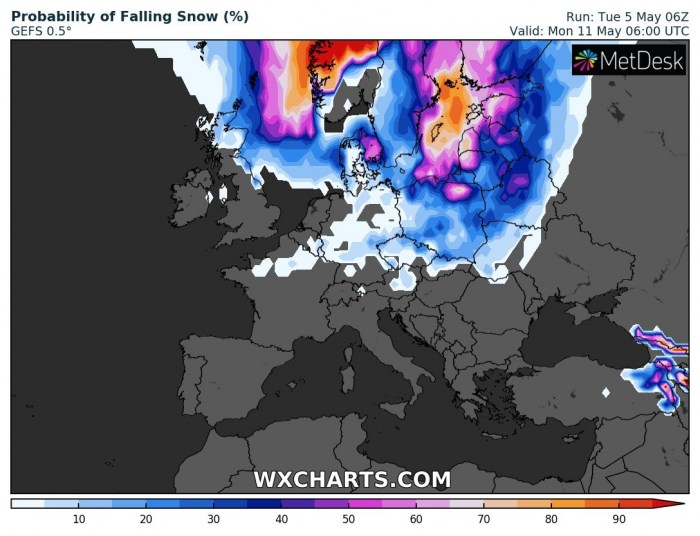 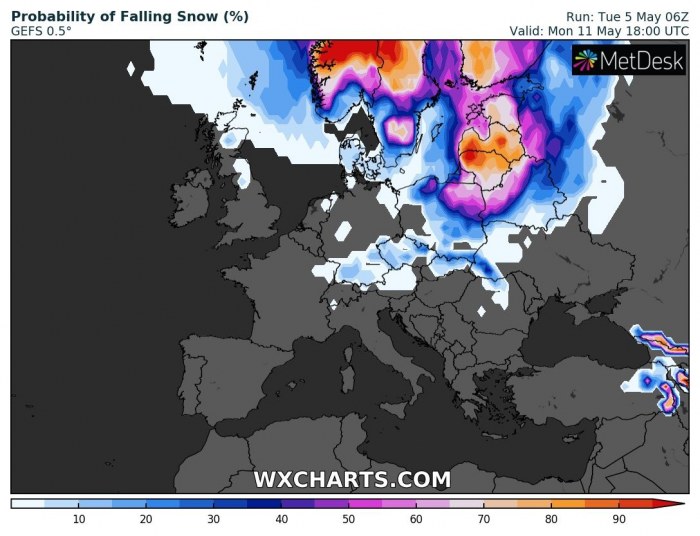 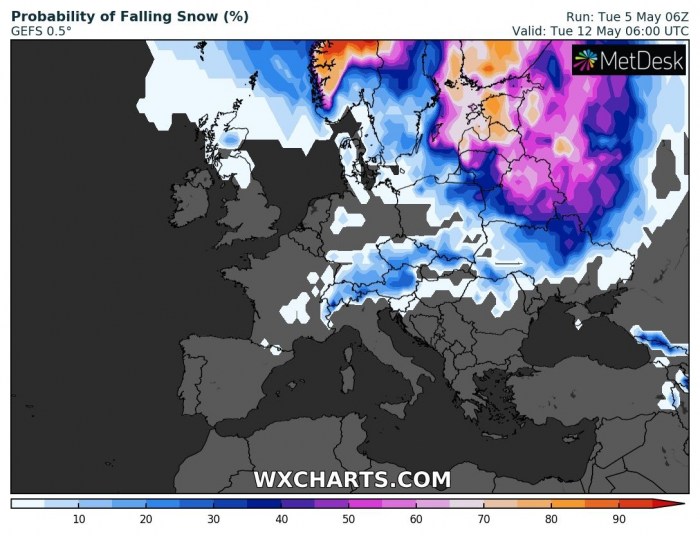 Undoubtedly there is a high potential for mornings frost in some of the lowlands, which could be once again destructive for the crops! We are closely monitoring the pattern evolution and will be posting more updates in the coming days – stay tuned!