We can see the strong wave-1 pattern on the forecast below, and it might be the strongest wave-1 pattern attack in the 40-year record for this time of year! This truly is turning into an exceptional event, being this powerful this early in the season. 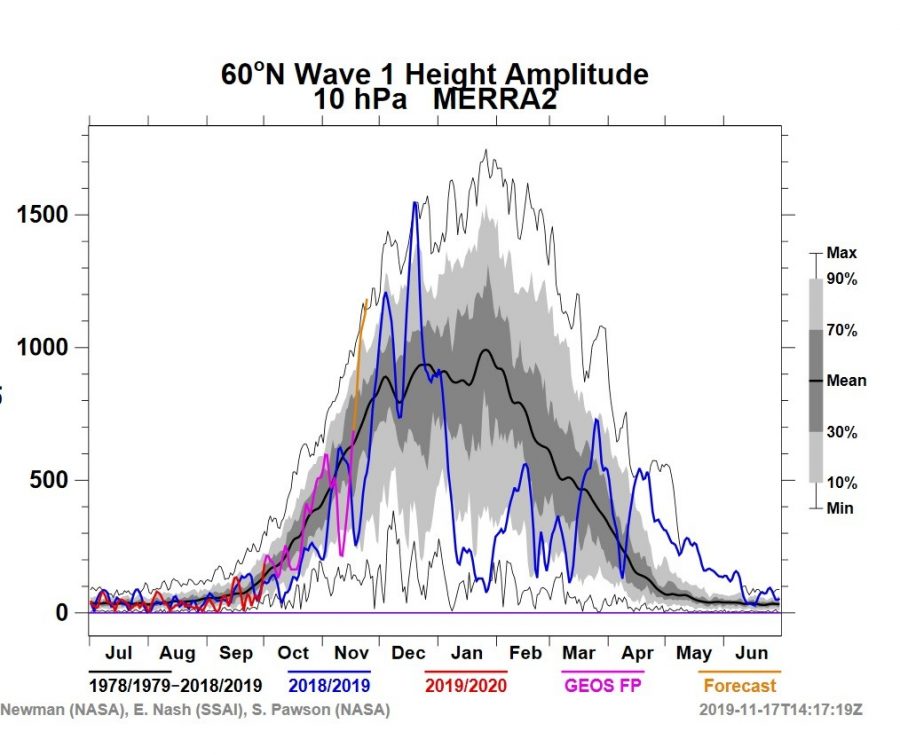 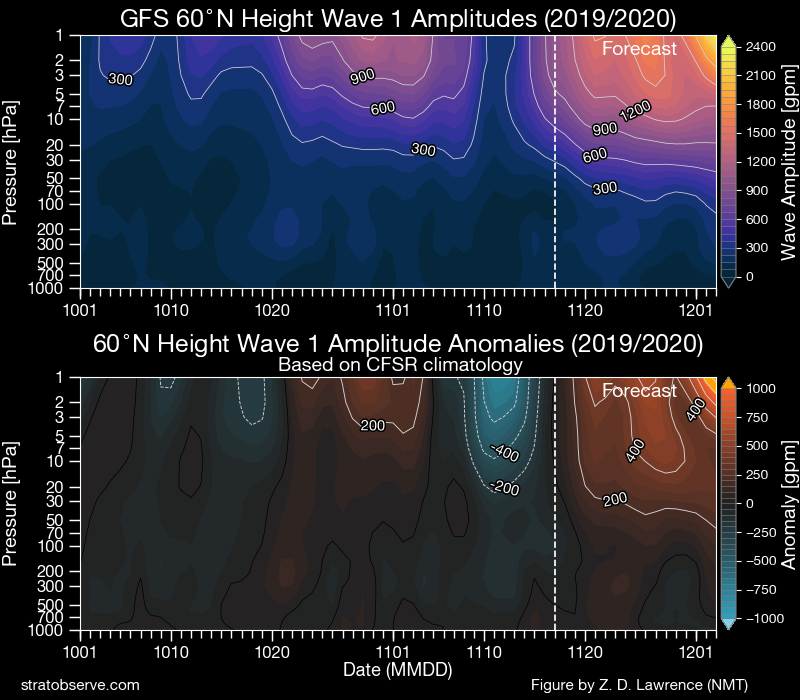 Currently, the polar vortex is under a wave-2 pattern attack, which is slowly receding, making way for the record-strong wave-1 pattern to take over. The number of the wave tells us how many “highs” are pressing against the polar vortex (low). On the images below we can see the current ongoing wave-1/2 pattern weakening the polar vortex. We can also see the brief warming phase-1 by the 25th. 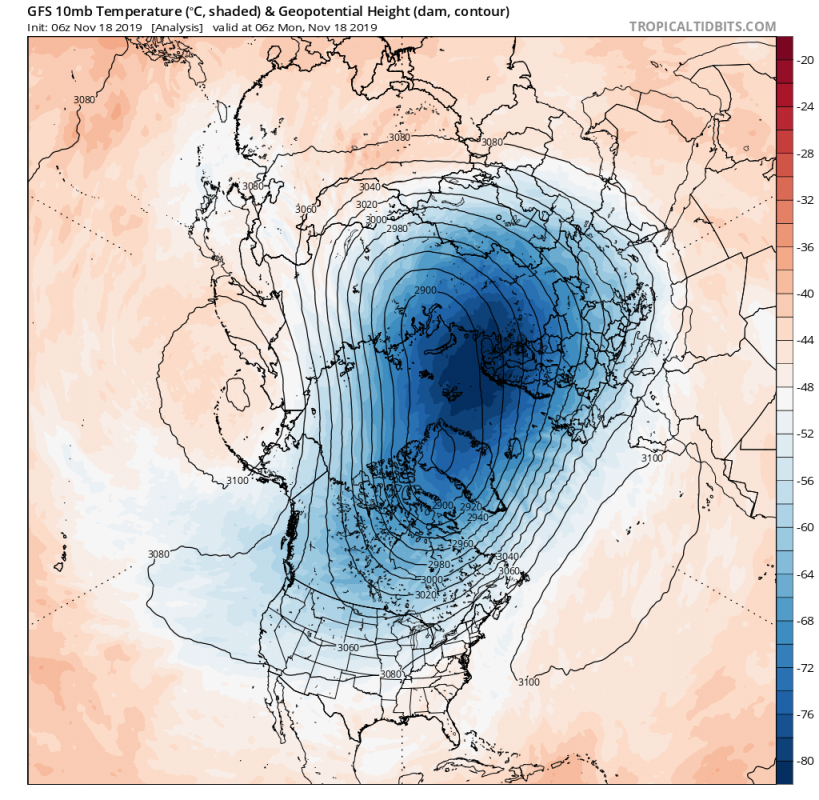 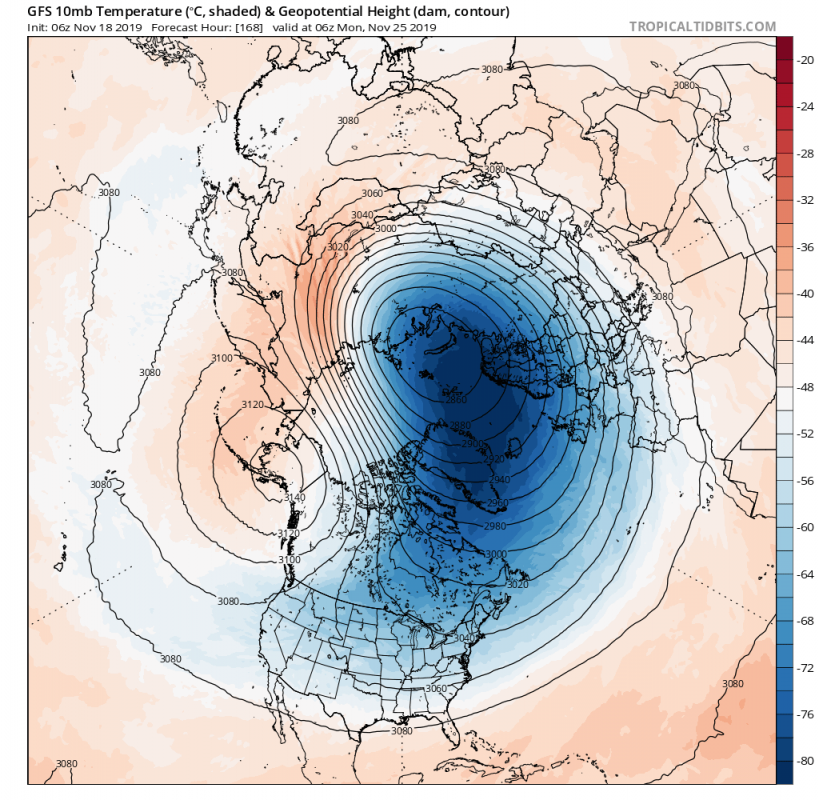 The 16-day ensemble forecast shows the strength of the polar night jet, weakening over time, taking a brief break around November 22nd. We can see that there are now ensemble members starting to show the reversal of the stratospheric jet stream, which would qualify this warming event as an official Sudden Stratospheric Warming (SSW) event. 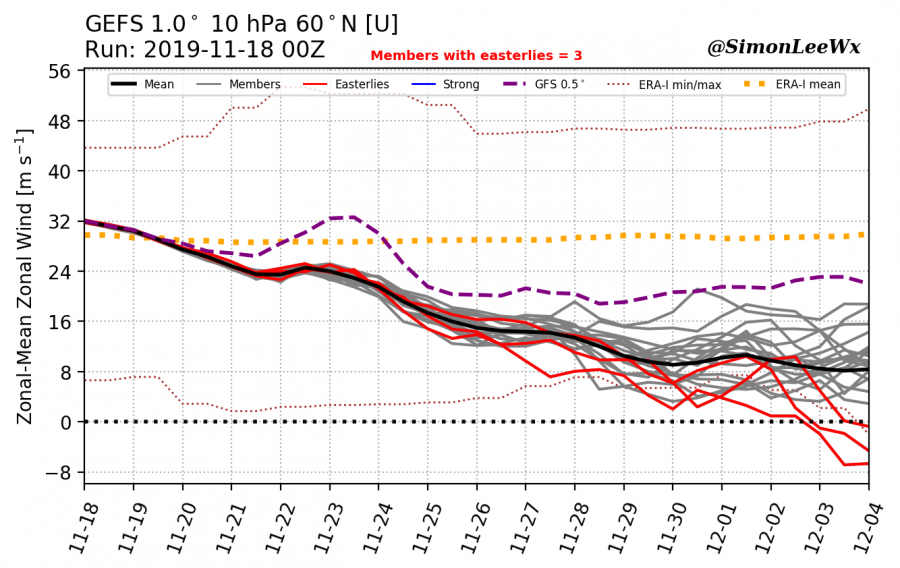 By November 22nd, the wave 2 pattern will weaken. We will see a shift into a more wave-1 pattern look, where we have one dominant “high” pressing onto the polar vortex. By November 30th, a new warming phase-2 will start over Asia. It is forecast to escalate very fast, emerging much stronger than the previous phase. We forecasted additional warming phases, over one week ago. The wave 1 pattern will strengthen, combined with the sharp rise in temperatures over Asia, and will slowly but steadily “eat” the vortex around its edges. Instead of a strengthening vortex, we will see a weakening vortex, which is not common for this time of year. A wave-2 pattern should slowly start to emerge again. 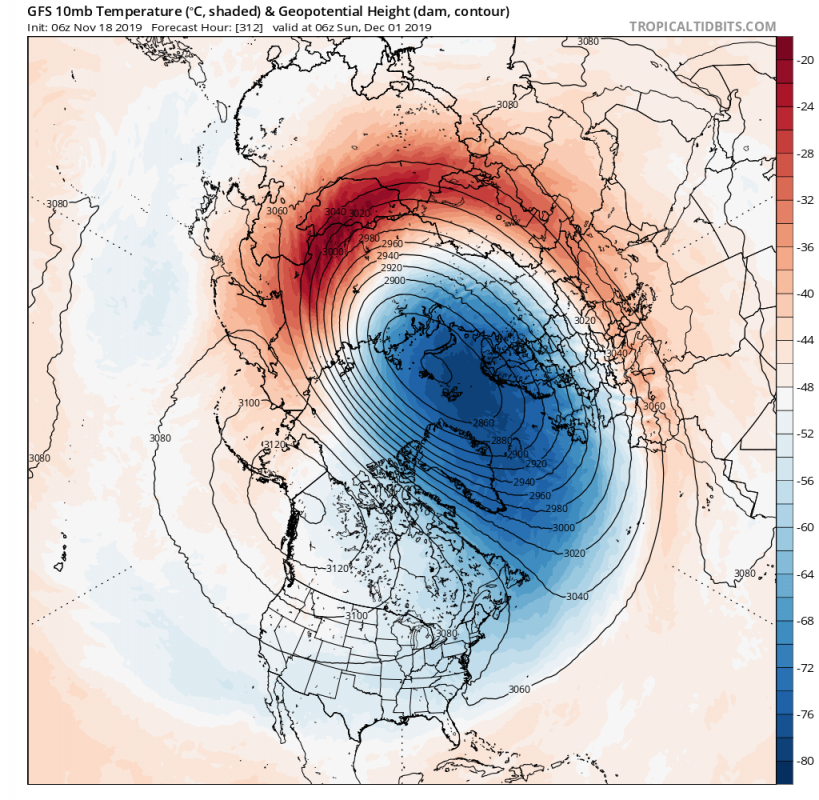 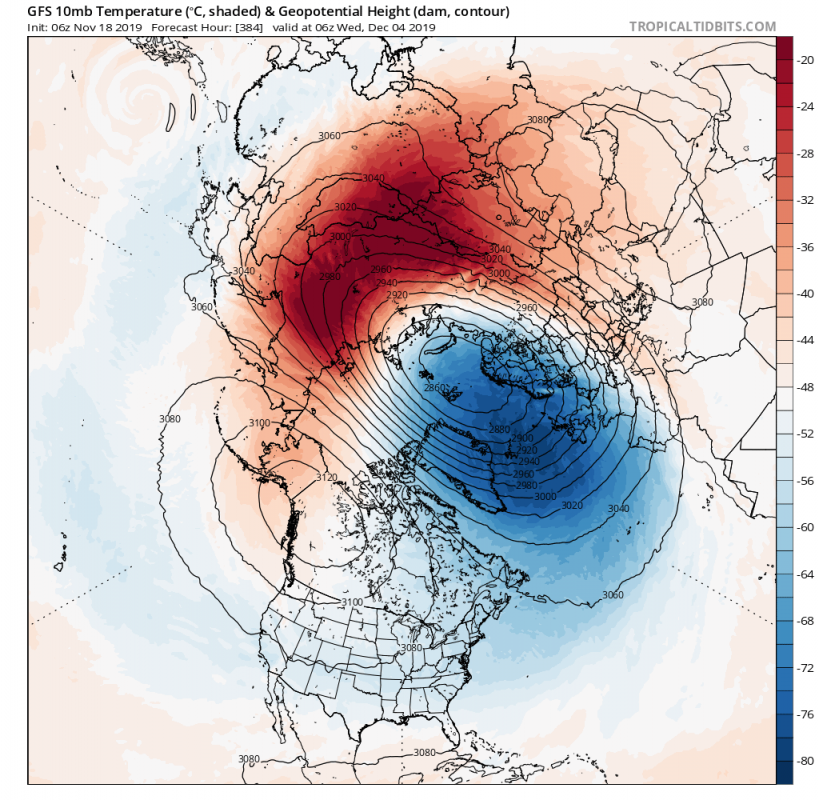 The warming in the stratosphere usually comes from the top down. Energy from the lower levels near the ground is deflected upwards and reaches the top of the stratosphere. It is then amplified, releasing the thermal energy, warming the upper stratospheric layers and slowly propagating downwards, embedding and weakening the polar vortex in the process. We can see in the images below, that temperatures higher in the stratosphere are actually forecast to be in the positive values, which is way above normal! 1mb level is around 45km altitude, while 5mb level is around 34km altitude. 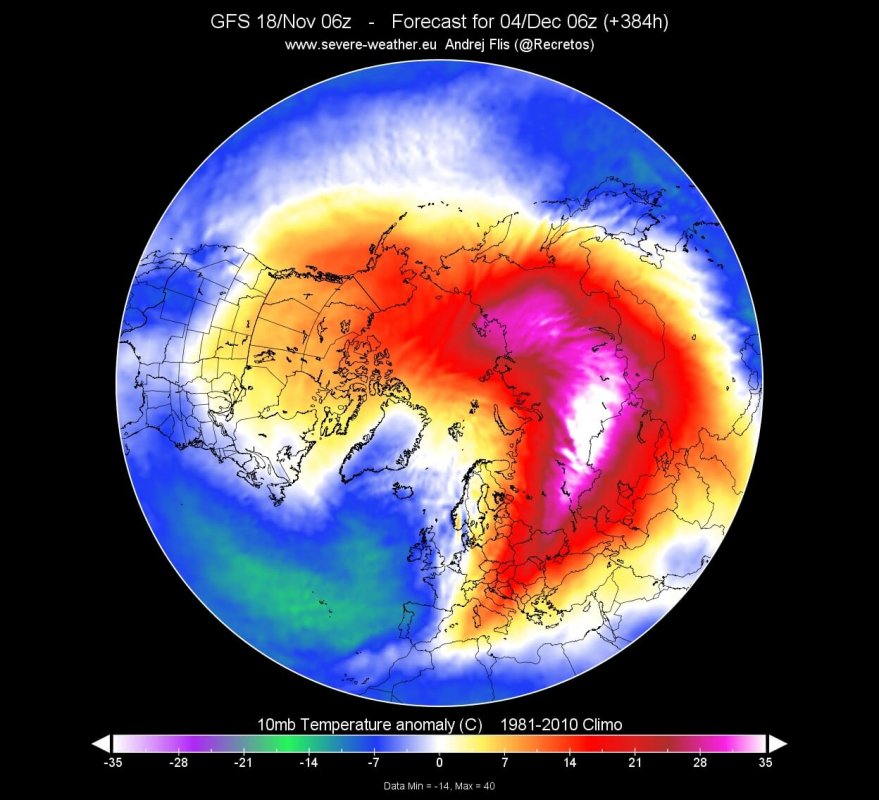 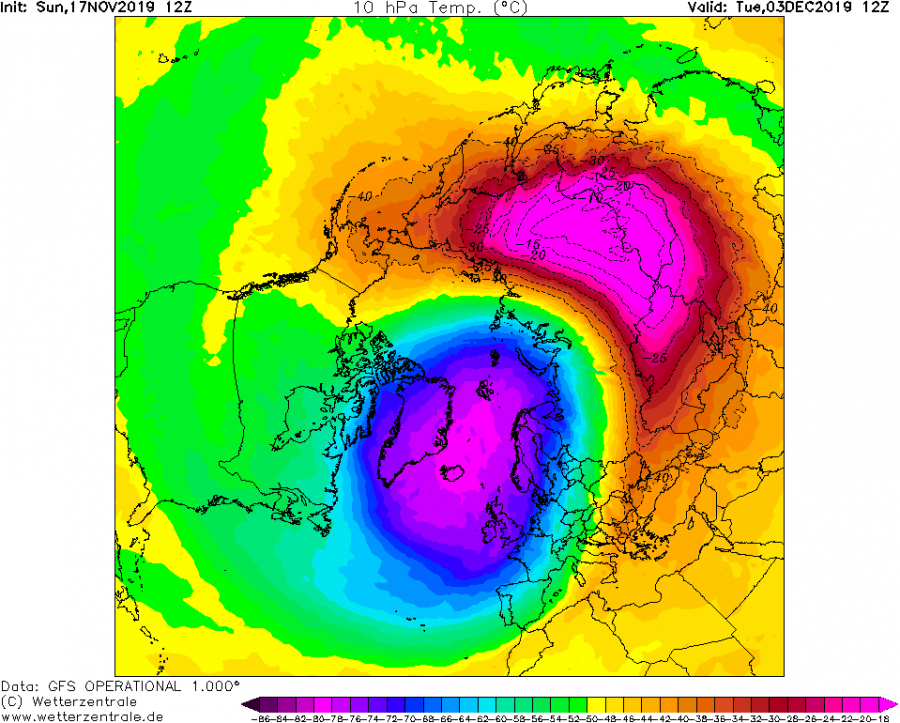