November model calculations are done, and they are usually regarded as the final forecast for winter. December is already a winter month, so November forecasts will determine long-range model winners and losers when we will look back in spring.

We decided to focus on the main 4 models from around the world or at least the most used ones. Graphics are from the Copernicus Climate EU project. All these forecasts are an average picture over 3 months (Dec-Jan-Feb) and show the general prevailing weather pattern. Even if the models would be completely accurate, it does not mean that such weather conditions would last for 3 months straight. There can still be cold fronts and snowfall in between such milder patterns in the mid-latitudes. The difference is that instead of the usual 10-20 snow days, for example, you only get 3-6 snow days (as an example). So the models don’t suggest what the weather will be like for 3 months straight, but just how it might look 40-60% of the time.

We always want to know how the pressure forecasts look like. That tells us a lot about the overall global circulation and weather patterns.
The 500mb geopotential height forecasts are not that different from the previous month. We see a deep low stationed in the North Atlantic, surrounded by the “highs” from eastern Pacific across the Atlantic into Europe. This is a classical positive NAO pattern. This means windy and wet weather across the UK and Scandinavia and mild conditions across central/southern Europe. In the USA, we see warmer and drier conditions in the central parts and western parts, and warm and more wet in central/southern parts. But with the low being stationed the way it is, this would also mean northerly (colder) flow into eastern Canada and north-east USA. 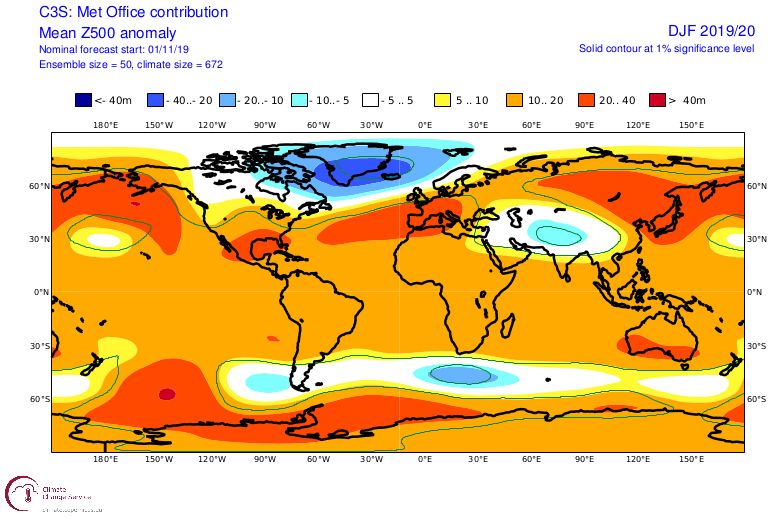 The 2-meter temperature anomaly forecast reveals the neutral zone mentioned above, in eastern Canada and the north-east USA. The rest of the continent is pretty much under milder conditions, with the exception of Canada, which is far enough north to get more cold and snow, despite positive anomalies. Europe is overall in above-average temperature, due to the strong constant high pressing up from the south, pushing up warmer air mass, and the deep low in the Atlantic is pushing the mild Atlantic air into the continent. 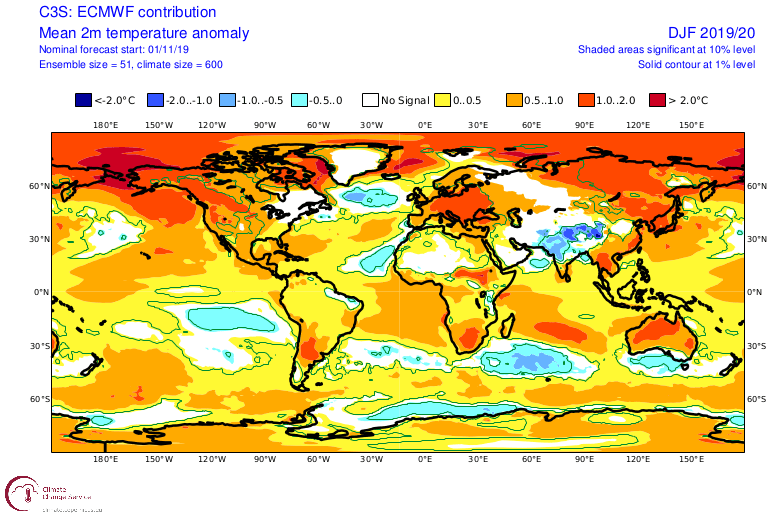 No surprises are seen on the precipitation maps. We see above-average precipitation in central/eastern parts of the USA. Also, there is a wet belt across the north Atlantic, and over northern Europe. It truly is a classical looking +NAO pattern. 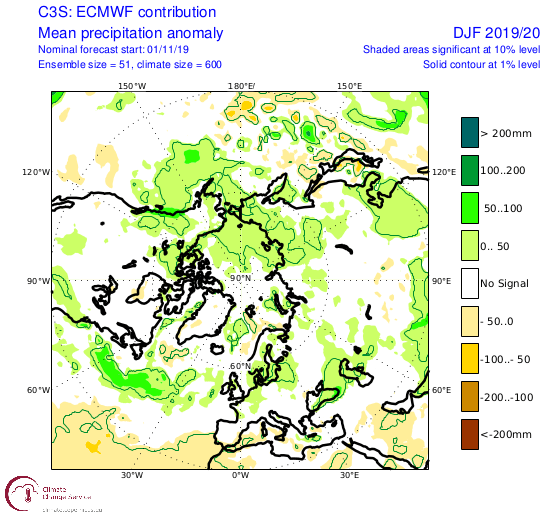 UKMO is the United Kingdom Met-Office. Just like ECMWF above, the UKMO forecast also has a +NAO pattern, perhaps even more defined. IT has a stronger North Atlantic low and positioned a bit further north. This causes a very mild weather pattern across the UK, Scandinavia and much of Europe. The exception might be the far south-east Europe, where some more northerly flow is likely. In the USA, UKMO focuses central ridging, with a possible trough in the western parts. That would indicate a possibility for some northerly flow across the north-western parts of the USA and far north-east USA, due to the North Atlantic low(s).

2-meter temperature anomaly forecast shows the neutral areas in NW and NE USA, and the warmer central parts under the ridge/higher pressure.  We also see another neutral zone in the far SE Europe, where a few northerly episodes are likely, as the area sits on the eastern side of a ridge. 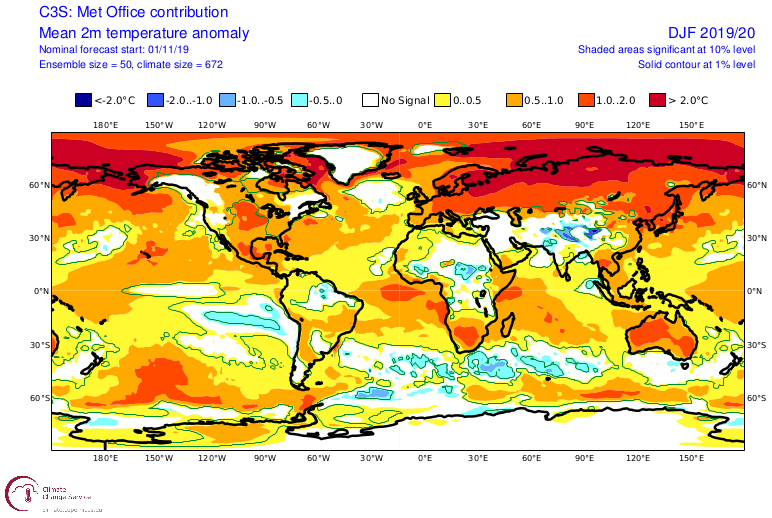 The precipitation pattern reflects the deeper low in the North Atlantic. We see a better defined North-South separation in Europe, separating the wet north from the dry south. We can see above normal values in the far SE parts, where it coincides with neutral temperatures and northerly flow. This could be an indication of perhaps decent snowfall in the area, at least the higher parts, and perhaps lower too if enough cold air mass reaches the area. In the USA some wintery conditions and snowfall are also hinted over the NW and NE parts. There we have above-average precipitation overlaying with neutral temperatures and northerly flow. 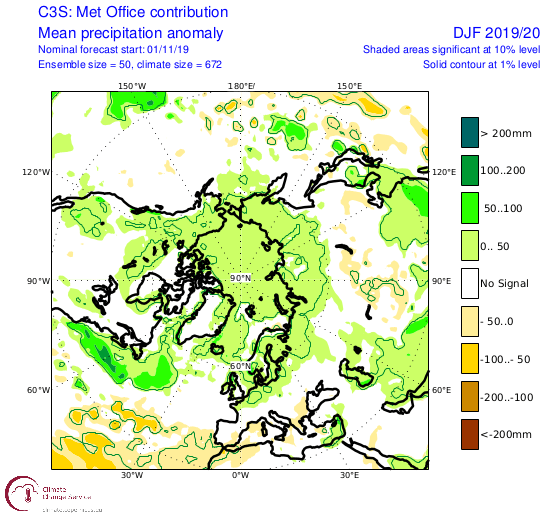 NCEP is the National Center for Environmental Prediction, stationed in the USA. Their long-range forecasts come from the CFSv2 model. It has an even more aggressive +NAO pattern than the UKMO and ECMWF above. Very deep and active low-pressure systems in the North Atlantic. That is constant west flow into northern Europe, pumping the mild Atlantic airmass into the continent. At the same time, strong high-pressure areas over Europe and east/central USA keep temperatures up and the air dry. Given the position of the low in the North Atlantic and the strong East Pacific blocking, there are increased chances for westerly/northwesterly flow in the NW and NE USA and E Canada. 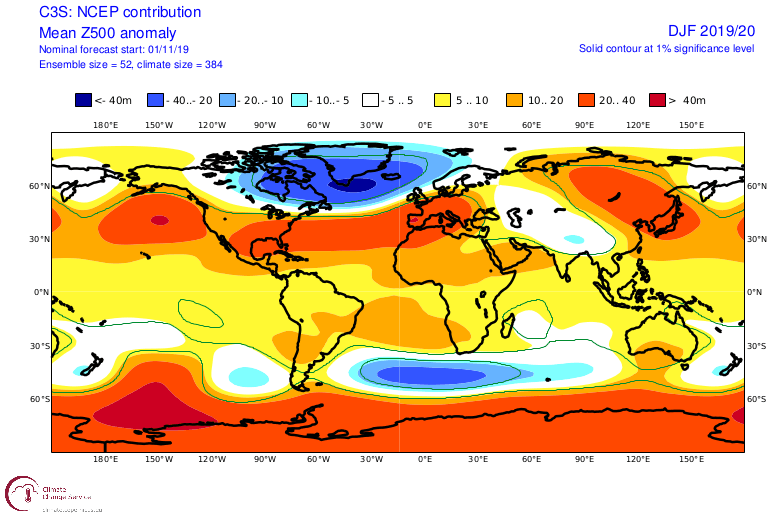 2-meter temperature anomaly forecast does show cold air in E Canada and NE USA, and neutral temperatures in the far NW USA. On the other side of the Atlantic, we have entire Eurasia under positive temperature anomalies. That is perhaps less likely since there is bound to be some northerly flow in eastern and south-east Europe, on the east side of the high-pressure area over Europe. 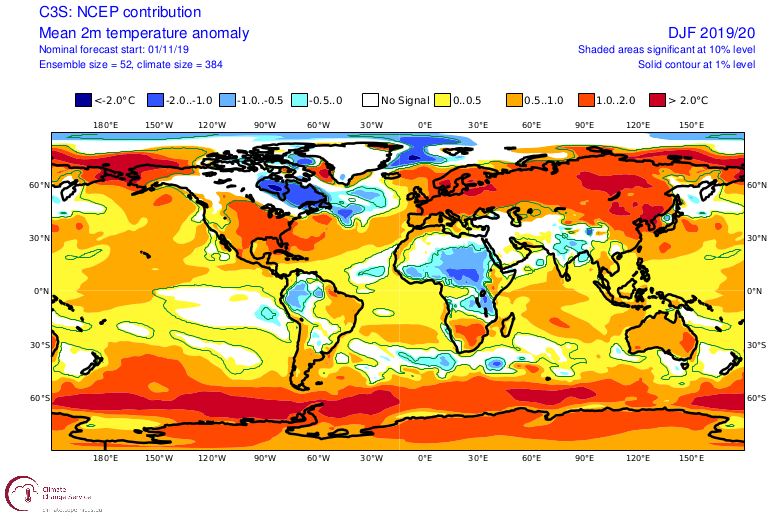 Precipitation patterns reflects the stronger low in the North Atlantic. We have clear-cut north-south, wet-dry areas over Europe and the USA. Together with the strong positive anomalies, this is a positive NAO pattern in all its might and glory. 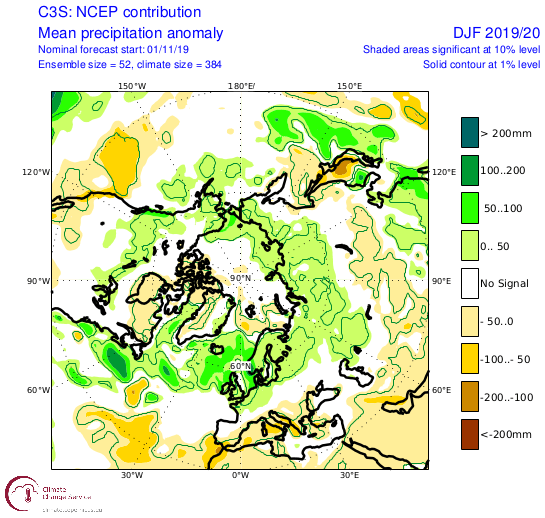 JMA is the Japan Meteorological Agency. Their forecast is similar to the other main global centers. Clean positive NAO pattern, with some norhterly flow in NE and NW USA, and mild airmass over Europe. 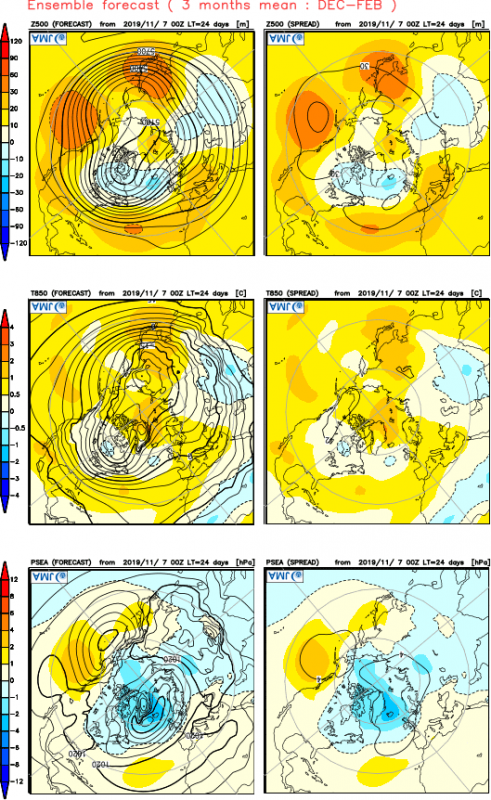 An important factor that can still change the course of this mild pattern, is of coruse a potential major stratospheric wamring. You can lere here -> what is the polar vortex and how does it influence our weather.
We are currently observing a potential major stratospheric warming developing for December, possibly initiating a collapse sequence of the polar vortex. The image below shows the forecasted warming in the stratosphere around 30km altitude.  This might have important implications for weather in late December and for the rest of the winter. The collapse of the polar vortex can have major effects on the weather patterns around the North Hemisphere. The warming propagates downward from the top of the stratosphere, and circles around the polar vortex, weakening it from the outside in. 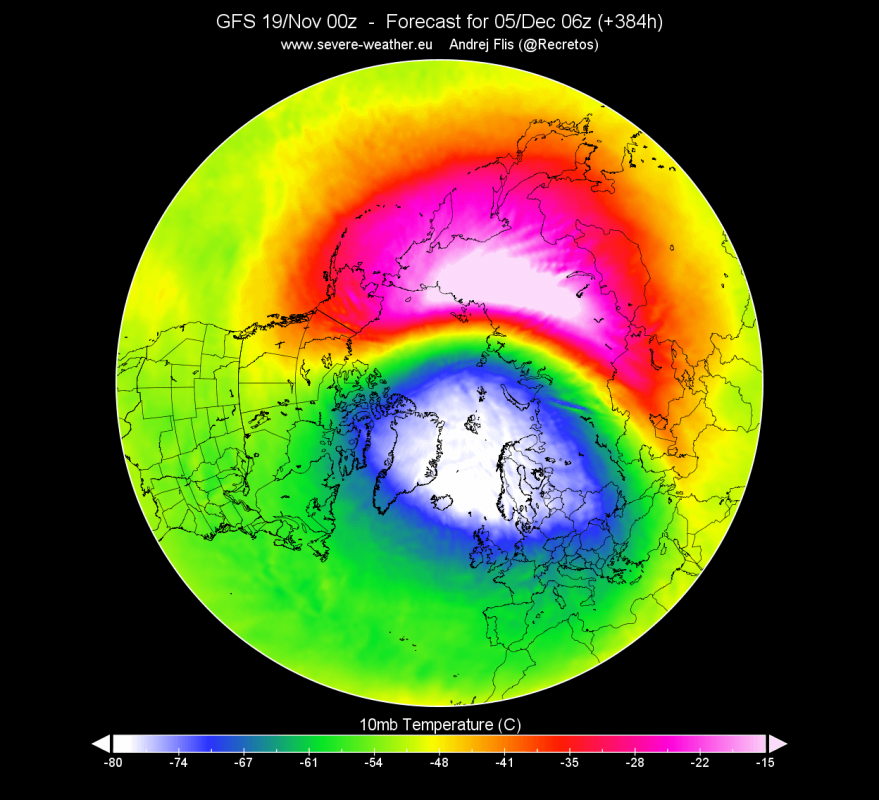 A collapsed vortex always greatly increases the chances for winter weather towards Europe and CONUS. A lot depends on how the existing pressure pattern looks when the effects from the stratosphere come crashing down on us. In some cases, the effects can be partially “deflected” and we don’t feel much of a change in our daily weather. But in most cases, the effects can have a major influence on the distribution of weather systems across the hemisphere. The graphical example below shows the average temperature anomaly 0-30 days after a major warming event. We can see the main cooling effects are across Eurasia and the United States. In this composite, there are effects of over 30 stratospheric warming events. Most such events have sent cold weather down to Europe and United States. But there were some that made no real difference, since the existing weather patterns were either too strong already, or the effects coming down from the stratosphere were too weak, to begin with. A stratospheric warming event makes no promises but can make or break the weather patterns over the Northern Hemisphere, one way or another.

What does all this means for our weather this winter?

Most forecasts are showing certain lower pressure in the North Atlantic, and higher pressure over Europe and USA, which means generally  milder winter. The forecasts are on the same trend since September, which is very rare. These forecasts are an average picture over 3 months (Dec-Jan-Feb) and show the general prevailing weather pattern. In Europe, some winter weather is still possible generally, especially if the prevailing high pressure over Europe can create a temperature inversion with fog and cold air pooling in the lowlands, creating an artificial winter. Across the Atlantic, models generally agree on potential northerly flows over NW and NE USA and E Canada, while central USA currently has lower chances for winter weather overall. These forecasts don’t mean that this how the weather will be 3-months straight, but just show the dominant pattern idea. There can still be bypassing cold fronts and snowfall in USA or Europe (during weather pattern re-adjustments), just not in the usual amounts.

We still have the stratosphere as a major factor. Long-range forecasts are generally not as good at forecasting stratospheric dynamics in detail, which means they tend to underestimate any potential sudden stratospheric warming events (SSW’s) since the final forecast is made out of many individual calculations, which have different ideas about the stratospheric development. An SSW event can have a major impact on the circulation and can cause major pattern changes in the Northern Hemisphere. So a potential SSW event is an important factor that can change the course of winter in either way across the North Hemisphere.

We will keep you updated on any important further development in furhther individual articles, as the stratospheric warming situation is just starting to unfold, with many weeks of  monitoring and observing ahead!