Yes, you’re reading that right. Today, on Dec 7th, 2020, an intense supercell storm rolled across the North Adriatic Sea and produced a tornado that hit the Port of Trieste city, Italy in the evening hours. Severe weather with large hail and damaging winds blasted across the Slovenian coast, and also the city of Trieste itself.

Hey, who put bets on a tornado formation during winter? :)

First, a supercell storm and then a tornado has formed over the Adriatic sea, rolled into the Gulf of Trieste and hit the city. Wait, a supercell and a tornado during a winter month? Isn’t there a winter now in Italy and central Europe?

Well, keep in mind it is 2020. It seems that nothing can surprise us anymore!

Here is a timelapse video animation of the event, showing a rotating storm when it is ongoing along the northwestern Istra, then grazing the Slovenian coast and rolls into the city of Trieste, Italy with a spectacular supercell structure and a tornado formation into the Port of Trieste.

Call it rare, historic, or whatever possible, the event is extremely rare! Lets us repeat… it is December 7th, a winter month and the Adriatic Sea and the city of Trieste are located in central Europe. And the area experienced an intense supercell and a tornado?

Let’s see how the event evolved and what a photographer has seen on the field.

DEEP TROUGH OVER EUROPE, WAVE OVER THE ALPS

The pattern over the European continent this week is an extension of the ongoing strong dynamics over the week when an extreme snowstorm and hit the Alpine region. Nearly 800 mm of rain has been reported from northeast Italy, with destructive flooding and landslides.

And also meters of fresh snow over the higher mountains in the region.

A large long-wave trough is dominating western, central, and southwestern Europe currently, with a very deep core centered over France and the Bay of Biscay. Southwesterly flow is maintaining warm and very moist air mass into the northern Mediterranean.

The Gulf of Trieste and the North Adriatic region and marked on the chart. 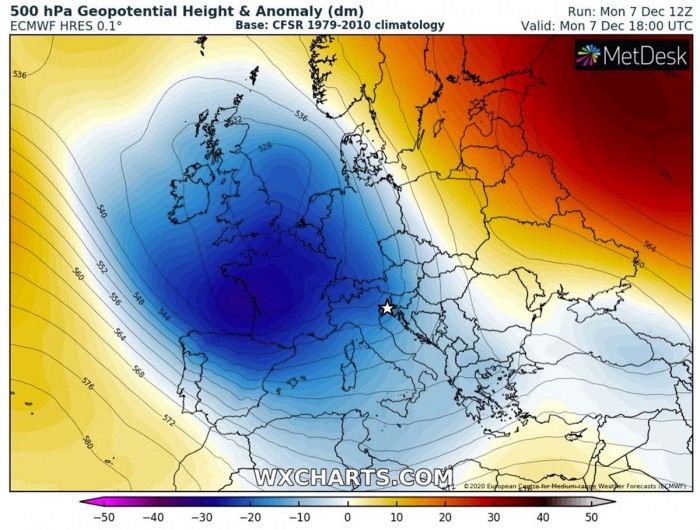 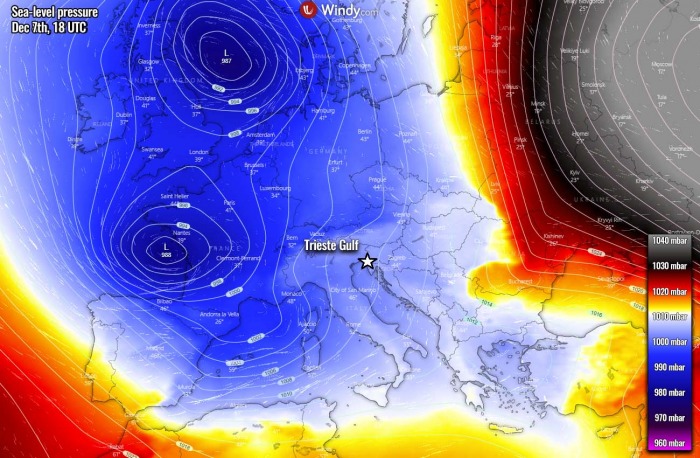 The Trieste Gulf is located on its front side, so where the warm advection is moving north from the Mediterranean region. As we can see, a large high-pressure system is also spread across western Russia, so in between, southerly flow is established. Relatively strong winds actually.

Long story short: Warm advection brings warm air and potential instability while stronger winds result in wind shear. A combination of both often delivers severe storms, including supercells. The stronger they are, the more severe and robust storms can develop.

SUPERCELL STORMS OVER THE ADRIATIC SEA

A storm chaser Marko Korosec was on the field, observing the storm from its birth over the North Adriatic Sea by early evening. At the time, the storm was located to the west of Istra, roughly in the middle between the peninsula and the delta Po valley, Italy. 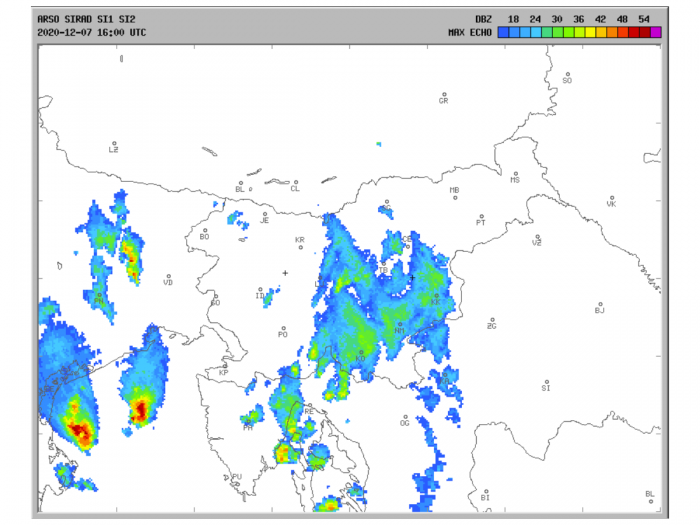 There were actually two isolated supercell storms over the area, in the beginning, another was moving north to the west of the main one. But it dissipated when moving into a less favorable environment closer to the Italian coast.

But the eastern storm did survive further and strengthening. Thanks to the southerly winds, providing enough warm air moist air ahead of it.

As we can see from the attached sounding diagram from Udine (NE Italy), there was some shallow instability present there. However, the location is way far north of the warm sea, so it did not sample the environment correctly. So the instability – CAPE, must have been quite higher further south where the storms formed. 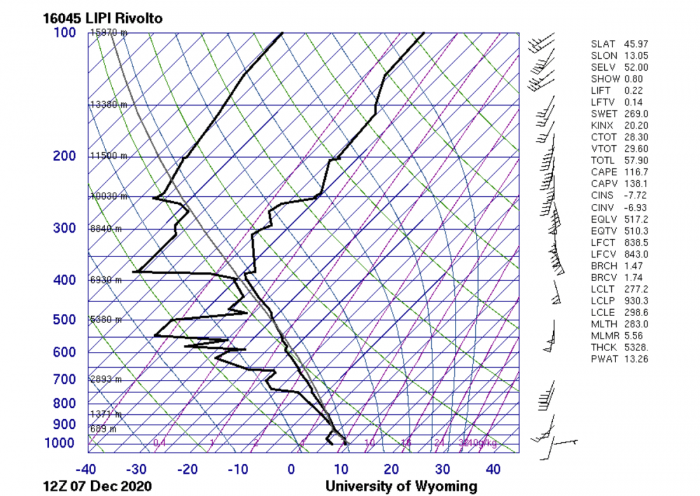 There was quite a steep temperature change with height, supporting vigorous convection, so storms were able to organize also thanks to the wind shear. Although it seems rather disturbed wind profile, keep in mind the NE Italian plains were out of best conditions as the main instability region was indeed further south over the Adriatic sea and northwestern Croatia.

Towards the 6 pm local time, the storm revealed a really impressive signature on radar, it became an HP (high-precipitation) supercell. We can see the western storm also dissipating at this time. But the front storm actually gaining strength while drifting towards northwestern Istra and the Gulf of Trieste. 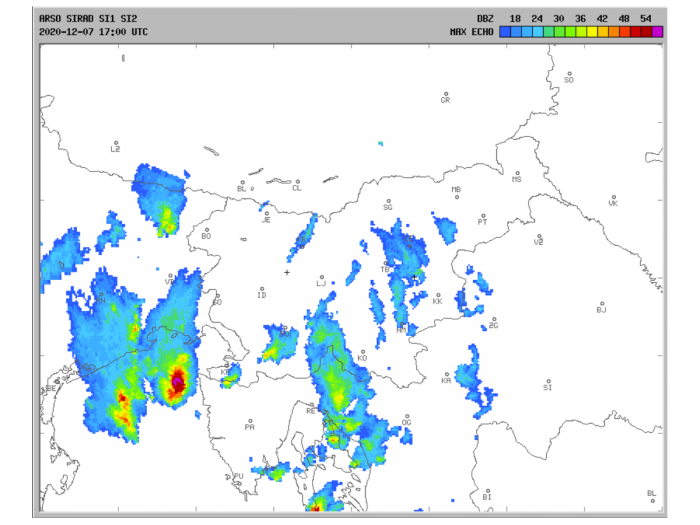 The storm structure was well visible from the coast of Istra and also from the elevated locations of southwestern Slovenia and Trieste. Here is the view of its structure, illuminated by frequent lightning activity at this stage from the radar scan above. 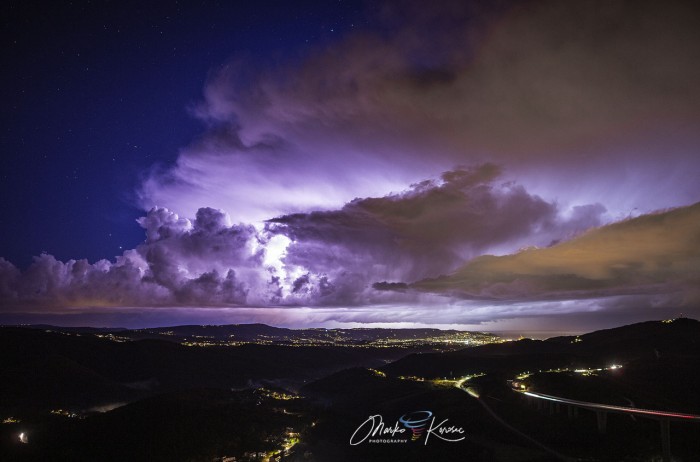 Another view with clear skies around the storm, creating a spectacular contrast between the storm’s structure and the starry skies. Notice there is also a shelf and a large wall cloud visible just above the surface. The object at the bottom is the famous viaduct Crni Kal, while the city in the back is Koper along the Slovenian coast. 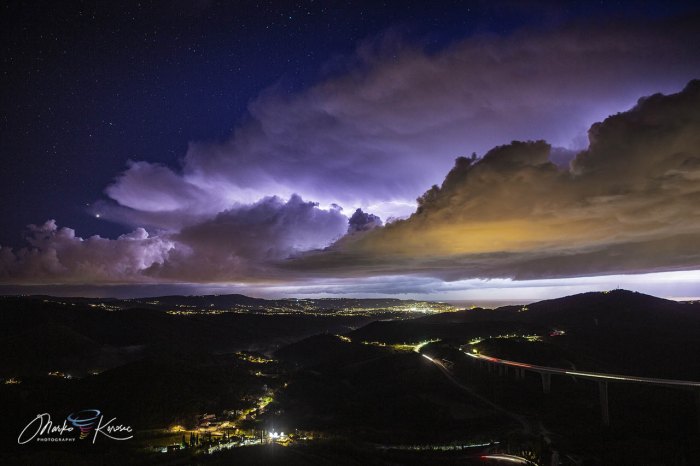 The supercell storm was associated with frequent lightning strikes, even with a lightning barrage at times. Creating a remarkable scene over the Gulf of Trieste and the Slovenian coast. 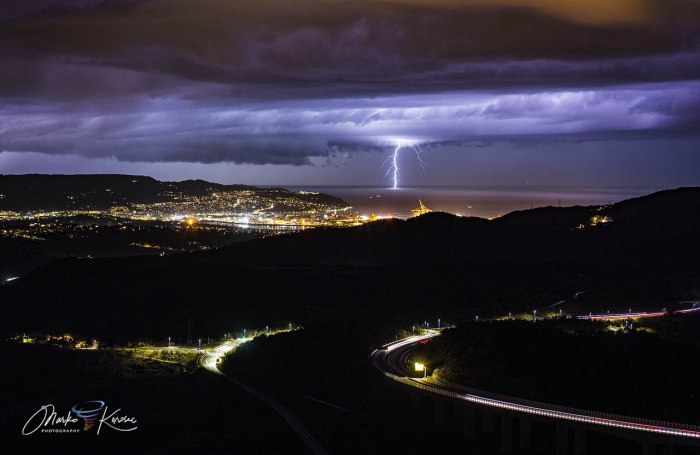 The lightning was, however, quite distant but the bolts were easily visible with the crystal clear air mass as it was very cold evening. Marko was reporting only 4 degrees Celsius temperature and downslope winds from the higher terrain towards the coast.

The storm then continued moving into the Trieste Gulf, grazing the Slovenian coast with severe damaging winds and large hail, reported from Portorož, Piran and Izola cities. The view from the satellite was quite impressive as well. The focused supercell storm is marked with an arrow. 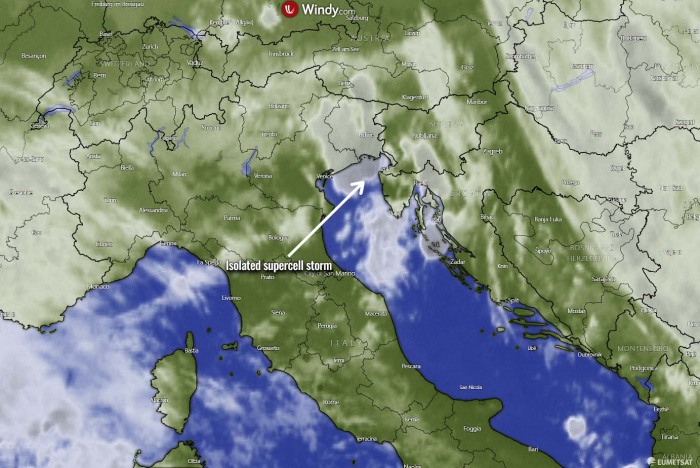 Notice there is also another storm further south along the Adriatic coast, rolling over Kornati islands and further into the Kvarner region.

Marko has then moved to another observation location, to have a better view angle towards the approaching storm. As the supercell storm was going directly to the city of Trieste, Italy. The vantage point is really great there, with a clear view of the Gulf and the city.

Attached below is the wide-angle view of the whole storm approaching. Notice a strong cloud base and the shelf/wall cloud beneath. The rotation of the storm was well visible at all stages, with occasional rotation under the wall cloud over the Adriatic Sea. Frequent lightning was helping to illuminate the storm’s structure. 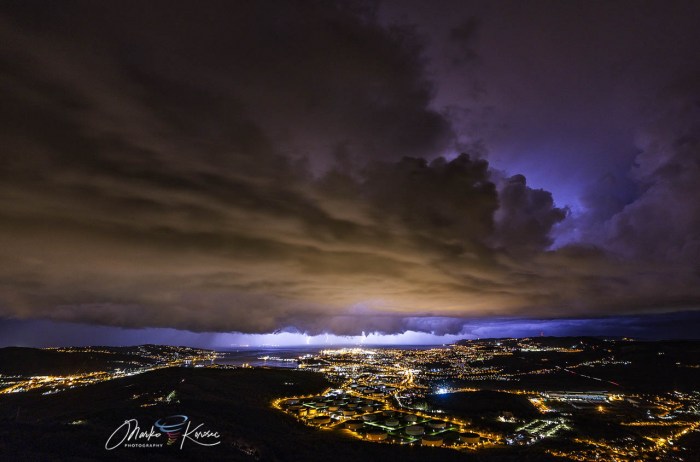 Here is now the radar scan of the storm during the time when it was blasting the Slovenian coastal cities and continued towards the city of Trieste. As we can see, the radar signature developed a very interesting shape over the area, with a kind of hook echo signature formation.

This has just confirmed the visual observations that the storm was really a fully organized supercell with a strong mesocyclone. 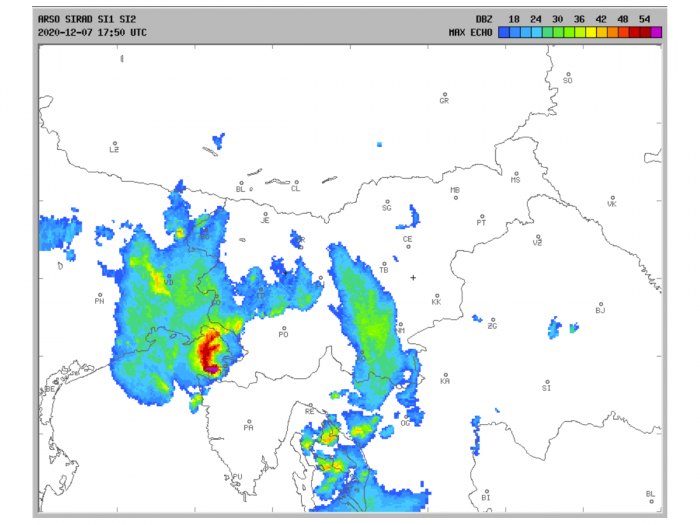 Large hail up to around 3 cm in diameter was reported from those cities affected, as well as downed trees by severe winds. The violet color on the radar scan is showing where the most intense rain, hail, and winds were ongoing at this time.

A view on the storm was getting better and better as it approached the city. As we can see from the two photographs below, the wall cloud was large and spreading towards the city. Notice deep convective towers aloft! 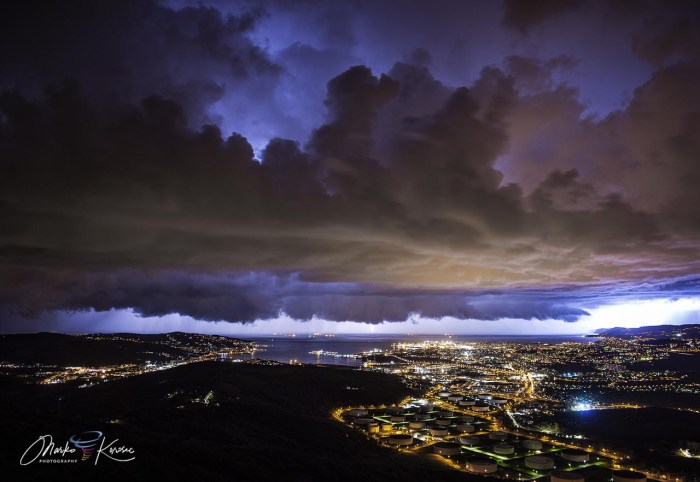 The contrast with the city lights is often spectacular when storms move over. 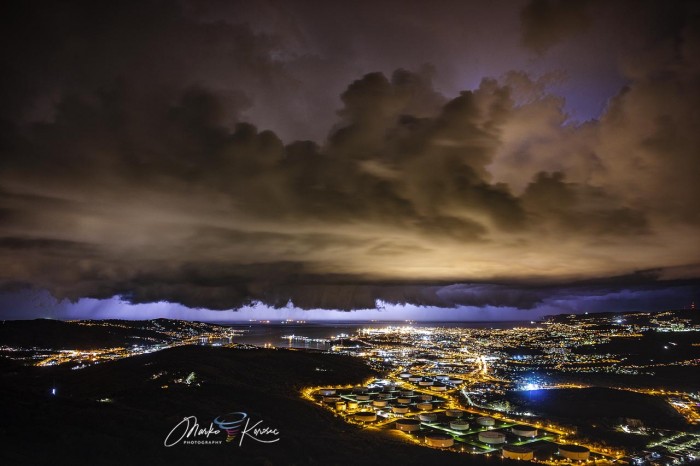 And such a scene might be typical during the summer months, not in December. As the meteorological winter has just started last week.

TORNADO FORMS AND ROLLS INTO THE PORT OF TRIESTE

And then, the rare and beyond spectacular show started! The wall cloud was very near to enter the city port and the rotation was strengthening on the left side of the wall cloud. If we see the radar posted a bit earlier, this is the time when a hook echo was scanned.

The structure of the storm was just stunning when a funnel cloud has appeared. A good eye can also catch it actually touched the sea, so we are now seeing a waterspout. Actually, it was a tornado over water – a mesocyclonic waterspout that formed with a supercell storm. 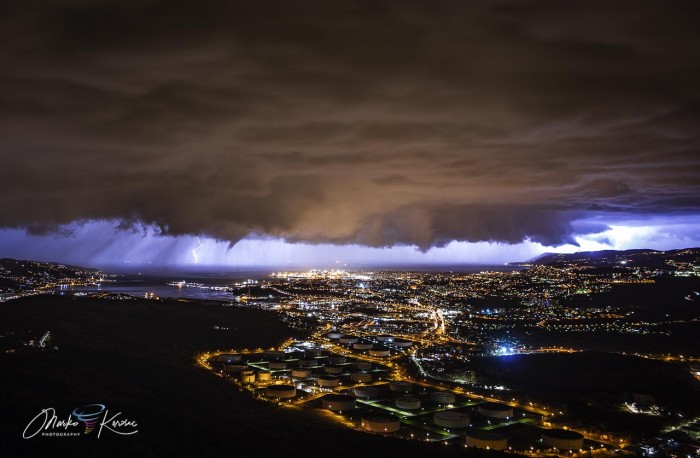 The lightning was helping to give a good contrast with it, so the tornado was greatly visible in front of the intense rain coming within the storm’s core.

Tornado then fully condensed and moved towards the Port of Trieste city. From this picture, it can be clearly visible that we have a large wall cloud, moving east and a tornado that has formed under its southwestern part. 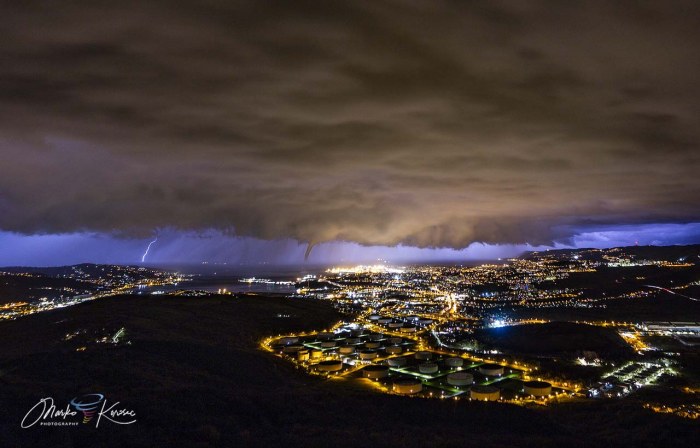 Here is a close-up view of the tornado with a better visible water spray in front of the port. Notice how low the clouds actually were with the wall cloud along. Cool temperatures during this event certainly helped the cloud bases and condensation levels to be lower than we would have seen in summer. 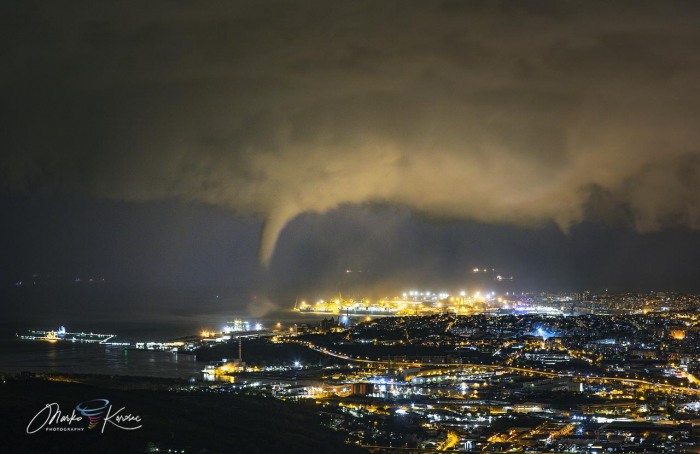 And another view of the pretty large cone while grazing into the Port of Trieste. 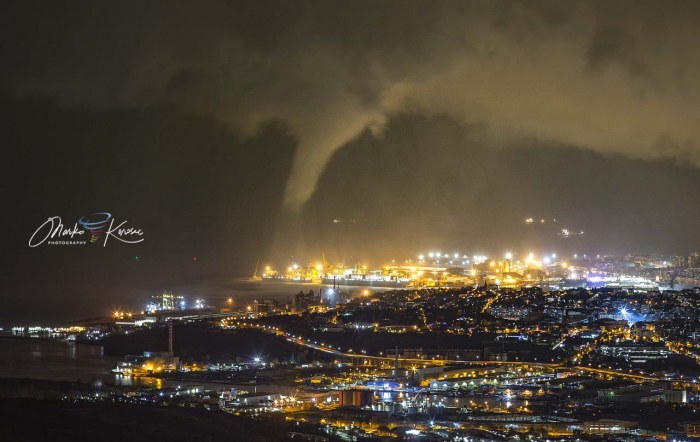 Here is now another rare sight! A tornado at night with a lightning bolt aside. Talk about a lucky shot! 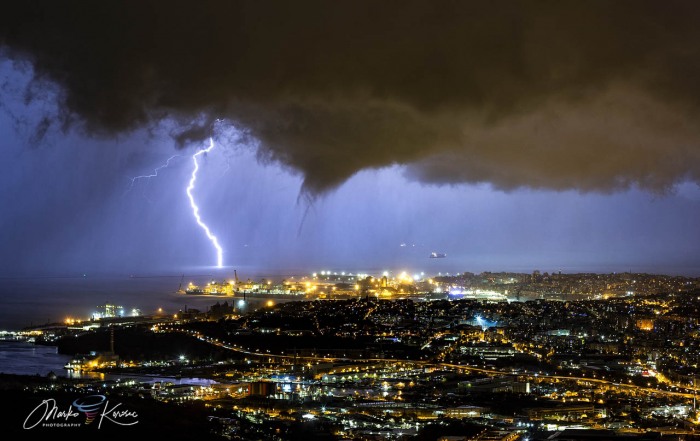 The event lasted for about 3 minutes when the funnel first appeared, quickly showed the water spray, and rolled into the Port of Trieste. It dissipated soon after coming into the city.

This was a very rare and probably a historic event for the region. To receive a supercell storm during the winter month of December is very uncommon for this part of Europe. And to top this, the storm also developed a tornado that rolled into the city of Trieste.

The supercell storm produced lots of lightning while large hail and severe winds blasted the city and also the Slovenian Coast.

Licensing and Prints of the photographs are available here: Marko Korošec website gallery.