Less than two days after an extreme rainfall and snowfall event, another heavy rain/snow event is unfolding over the northern Mediterranean region. It will bring another 100-150 mm of rain over west Croatia, west Slovenia, and northeast Italy over already completely soaked soil. Severe flooding, as well as coastal flooding along the northeast Adriatic Sea, is expected through Wednesday.

Another quite significant rain event is shaping up across the north-central Mediterranean over the next 36 hours. Although the amount of rain is not particularly extreme, the existing very high river water levels remain with soil completely soaked from the massive rain event last weekend.

The total of around 100-150 mm of rain until Wednesday evening will lead to re-emerging flooding, locally to some very significant levels.

In addition to the heavy rains, heavy snowfall will develop over the higher terrain, roughly above 1300-1500 meters above sea-level. The expected amount of precipitation in the area could bring another meter (100 cm) of fresh snow over the next 36 hours.

However, with a lack of strong warm advection with this event, the relatively colder environment will lead to snowfall quite lower over the internal, closed Alpine valley. Therefore snow can be occurring also below 1000 meters elevation there.

Here is the animation of the new system developing this Tuesday, intensifying overnight to Wednesday while gradually moving across Italy and the Adriatic Sea into western Croatia, northeast Italy, and western Slovenia:

Again, lots of rain is expected, as well as another meter of fresh snow in some areas.

NEARLY 800 MM OVER THE WEEKEND

The weekend event with a forecasted extreme amount of rain and over the Alps, especially across northeast Italy, northwest Slovenia, and southern Austria.

Weather stations in Slovenia and Austria reported to near 300 mm while peak stations in Italy have reported an outstanding 600-800 mm of total rainfall within a 72 hours period, from Friday afternoon until Monday afternoon.

At above the 2000 m elevation, the result was an extreme, 200 to 300+ cm of fresh snow with these extreme amounts of precipitation. 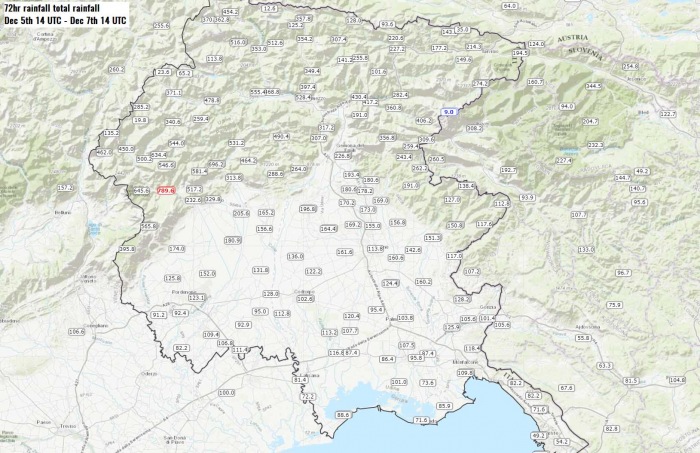 The aftermath were numerous landslides and flooding in the Alpine valleys, as well as damaging avalanches of the fresh snow.

The dominant feature of the global pattern this week is a very large and deep upper-level trough/low, centered over southern France and the northwestern Mediterranean. While strong upper ridge persists over Russia and the Azores.

We can see a large trough from the attached water vapor satellite image, with new cyclogenesis underway over the Mediterranean. A surface low is deepening again. 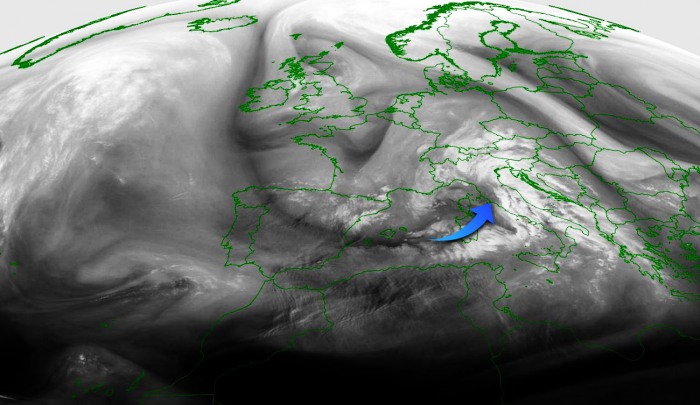 The southerly flow ahead of the low is pumping moist and warm air from the southern Mediterranean towards the Balkan peninsula and the Alps. 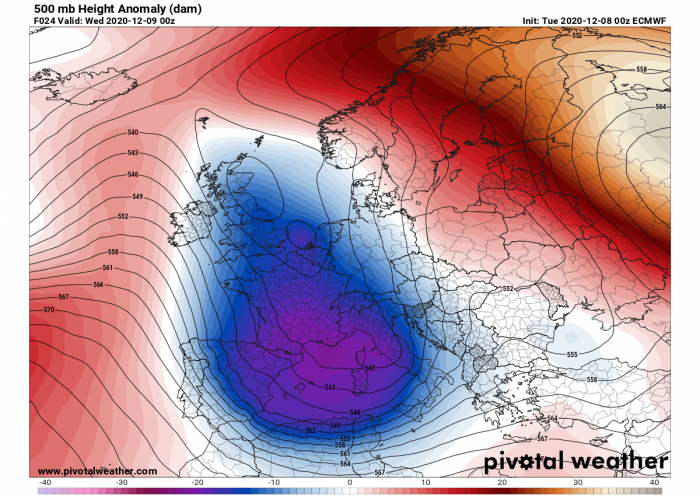 As we can see from the sea-level pressure, there is stil la broad area od low pressure over the northern Mediterranean and north Italy.

The low is placed in an ideal position for advection of moisture into the north Adriatic region and surroundings. While the central pressure is not particularly deep, it stays around 995 mbar until Tuesday evening and night hours. 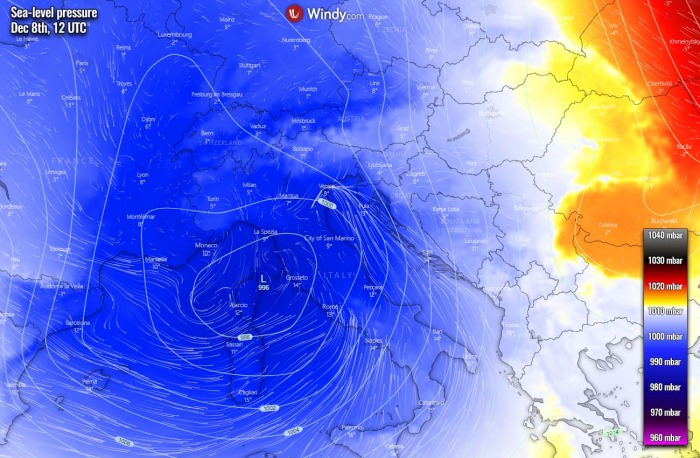 Here is the rainfall map through Tuesday evening and early night hours. Rain will be very intense across the north Adriatic region into northeast Italy and further into the area which was the worst hit the past weekend. Indeed, extreme snowfall will be ongoing above 1500 m above sea-level. 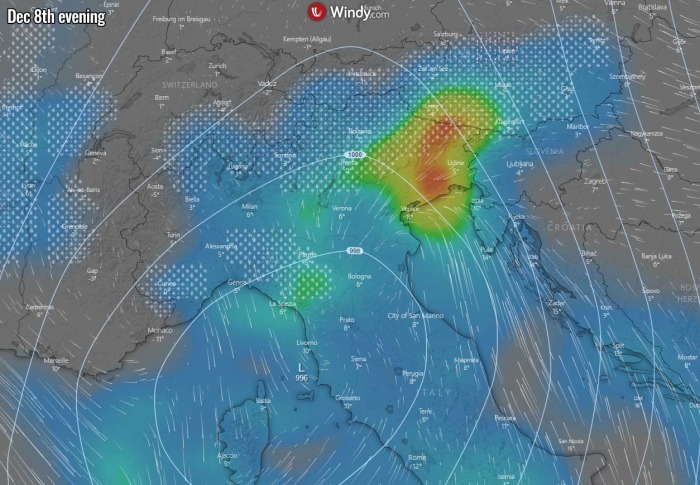 Through Tuesday night, the low’s center gradually moves towards the southeast, basically into central Italy and into the northern Adriatic Sea. The rainfall (and snowfall in the Alps) will therefore intensify. 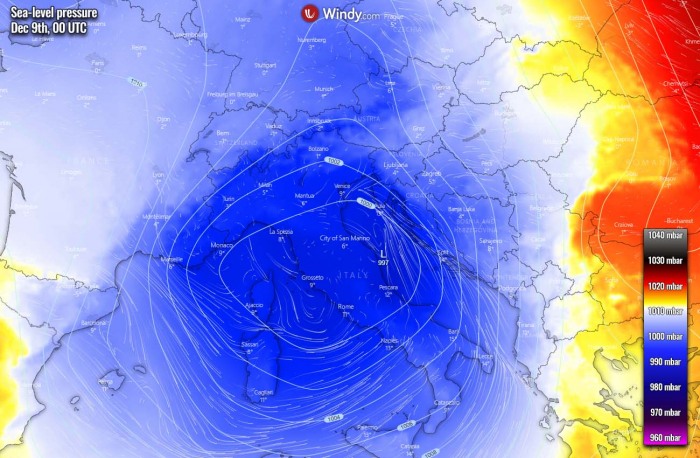 Its slow movement will result in very heavy to torrential rains at times, maintaining orographic rainfall and training cells will be possible. With even some convective lines seen by the weather models, as some instability will again develop over the still relatively warm Adriatic.

During Wednesday, the low remains quite large and over the same area, roughly centered over central Italy. However, it is gradually losing its strength as its central pressure rises to around 1000 mbar. Therefore heavy rains and the persistent southeasterly winds will gradually diminish. 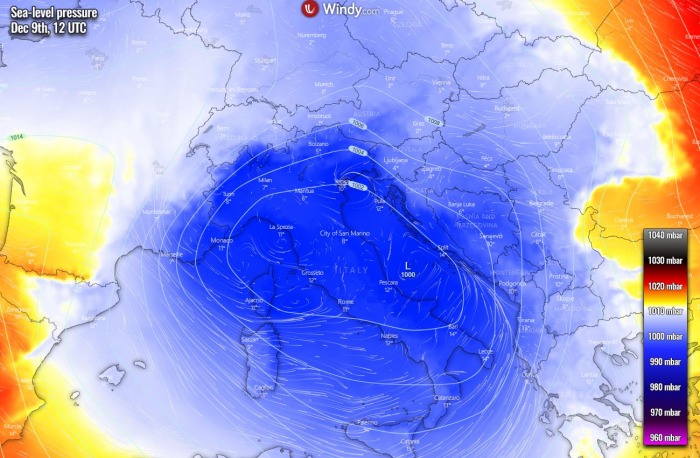 The low finally weaken by Thursday night with the continuing rising of its central pressure above 1000 mbar. Rains will finally finish over all regions. 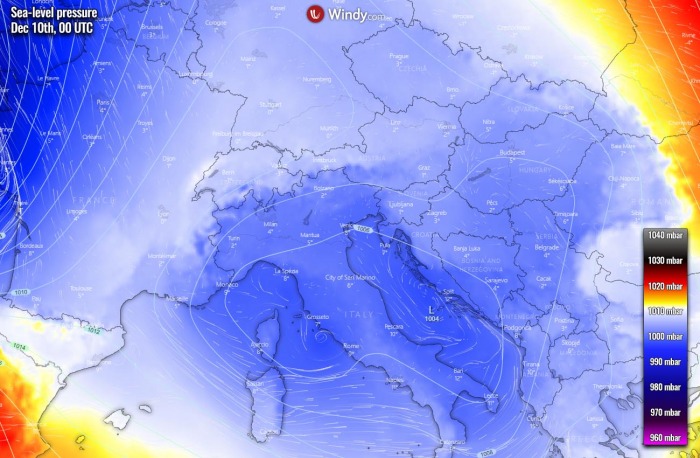 Attached are the rainfall accumulation charts according to the ICCON-EU and WRF-ARW models. Both models hint quite high rainfall sums, basically over the same areas that were lately hit.

This much rain will significantly worsen the ongoing high river water levels and lead to life-threatening flooding. 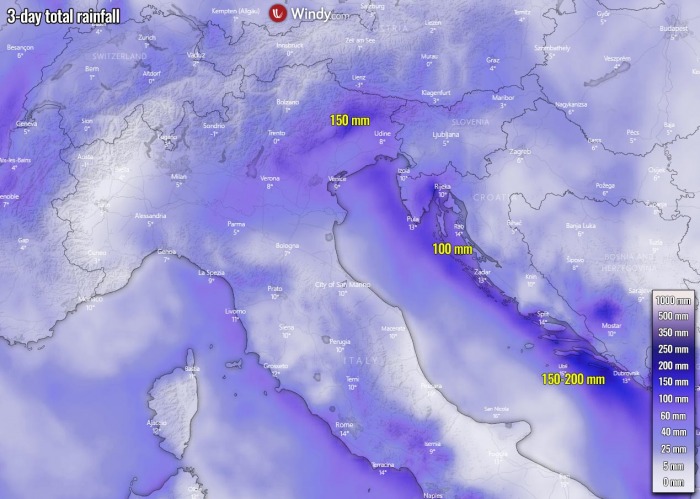 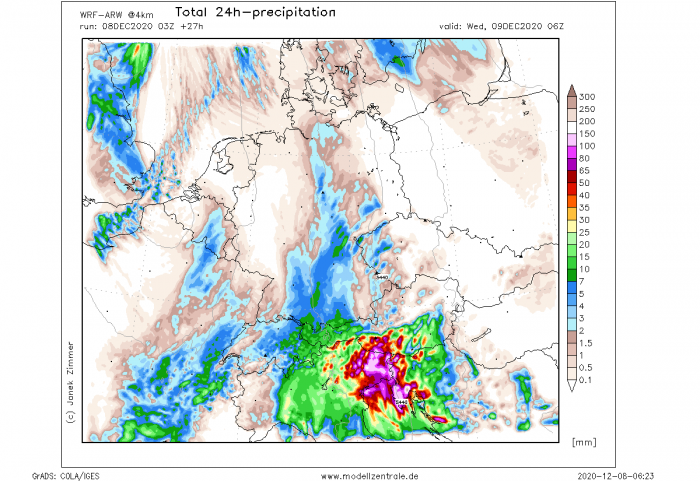 And indeed lead into a new deep pack of fresh snow for the Alps. High chances are that another 75-100 cm of snow can accumulate through Wednesday evening across northeast Italy. Around 50 cm fresh snow also across the surrounding elevated areas. 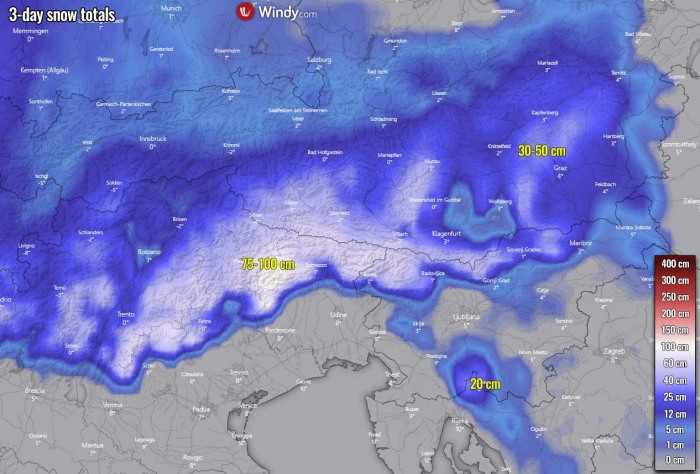 Italian, Austrian and Slovenian Meteorological Agencies have issued warnings for extreme, life-threatening excessive rain and heavy snow over the mountains. 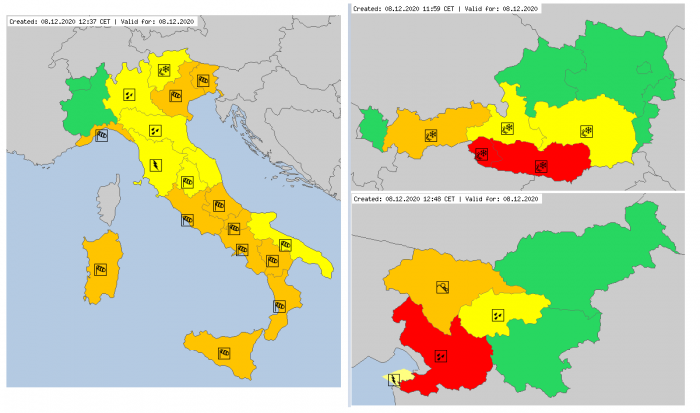 The Slovenian Agency ARSO has issued a RED ALARM also for flooding across southwestern Slovenia, where floods were already extreme over the weekend. The expected amount of rain over the region will push river water levels to near critical levels.