A major winter storm has emerged over the Alps – parts of northeast Italy, and south Austria are forecast to receive an additional extreme amount of rain and snow over the next 36 hours. A particularly dangerous situation is developing, with damaging flooding and avalanches possible over the region.

A deep trough has emerged into southwestern Europe and the western Mediterranean with a secondary surface low developing over Italy. The pattern has established a textbook excessive rainfall/snowfall event for the north Mediterranean region.

A *particularly dangerous situation* is expected to develop across the Alps on Sunday, December 6th. An extreme amount of rain and snow is expected, with local rainfall sums reaching 500+ mm. More than 300 cm of fresh snow seems increasingly likely above 1800 m elevation over these areas!

A combination of excessive rainfall, snow melting, and snowfall at higher altitudes could lead to damaging flooding and avalanches in the region!

A very deep upper trough/low has emerged into southwestern Europe while a persistent upper-level ridge is placed across western Russia and eastern Europe. In between, a powerful southerly jet stream is advecting high moisture towards the north.

A significantly warmer air mass is being pumped from the Mediterranean into Central Europe and the Alps. While at the surface, a deep secondary low is emerging over Italy.

This has introduced a textbook scenario for extreme rainfall and snowfall for the Alpine region, precisely across northeast Italy, south Austria and northwest Slovenia.

We have issued a SIG RISK (significant) and WNTR RISK (winter) for parts of northeast Italy into southern Austria and northwest Slovenia with a threat of extreme amount of rain and snow. Rainfall sums could reach more than 500 mm over a period of 36 hours between Saturday afternoon and Sunday night.

And locally, more than 300 cm of fresh snow could accumulate above 1800 m elevations over the same period.

There were also HIGH/MDT risks issued for western Slovenia, Croatia, and central Italy along the Apennines where excessive rainfall will push rainfall sums between 100 and 200 mm over the 36-hour period. 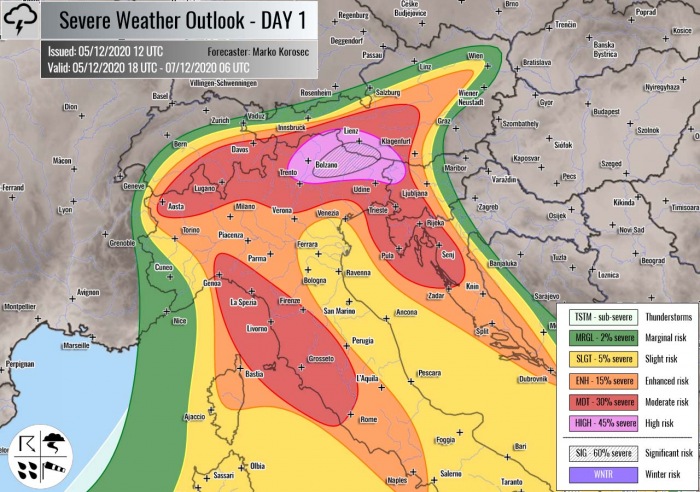 There is a VERY HIGH potential for damaging flooding and avalanche risk across the areas highlighted within SIG & HIGH risk levels.

All the available high-resolution weather models are hinting that 400-600 mm (15-25 inches) of accumulated precipitation will be possible over the northeast Italian and southern Austrian Alps from Saturday afternoon until Sunday evening.

Precipitation will fall as a very heavy snowfall over the higher elevations. Therefore, more than 300 cm (3 meters or 10 feet) of fresh snow could accumulate until Sunday night with this major winter storm being forecast. 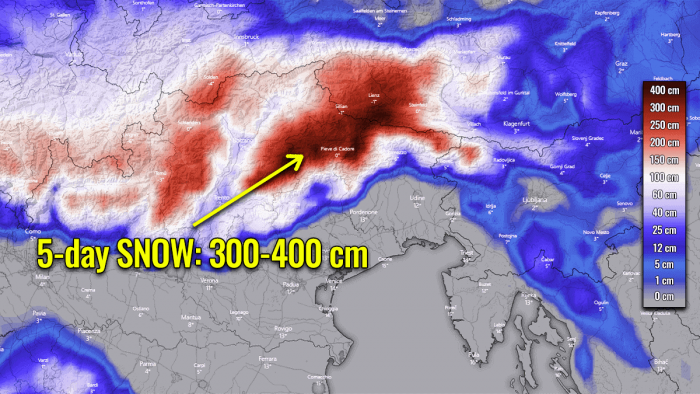 Conditions have been rapidly worsening over the northern Mediterranean and the Alps this Saturday, as both the warm advection from the Mediterranean region and the low/mid-level winds are increasing.

In other words, this means strongly enhanced orographic rainfall or snowfall for the northern Mediterranean region.

The majority of these rain and snow amounts will accumulate from Saturday afternoon until Sunday evening, as most of the precipitation will be associated with the deep secondary surface low over northern Italy over the weekend. So the amount of rain will be roughly a relatively short, 36-hour event!

Such an amount of rain will become a significant flooding threat for the lowlands along the slopes, also depending on how high the snowfall will be occurring. The higher it occurs, the more rain could accumulate as this means the warm advection will be stronger and push more moisture into the Alps.

Here is an impressive animation of the ICON-EU and ARPEGE model winter storm forecast across the Alps over the next 3 days. A major snowstorm will result in an extreme amount of snow across northeast Italy and south Austria until Monday. Major flooding and avalanches are expected on Sunday.

After more than 400 mm of rain already being reported across northeast Italy and more than 150 cm above 1800 m at some stations in the region, the situation could lead to a potentially catastrophic outcome. Flooding is already underway in some parts since Saturday afternoon!

A rapidly changing weather pattern over Europe has emerged on Thursday, December 3rd. A strong upper-level ridge and an associated surface high-pressure system were dominating the North Atlantic, while a deep Arctic trough pushed south along its eastern flank.

As it can be seen from the satellite image on Saturday, an impressive intrusion of Arctic cold and drier air mass has spread towards western and southwestern Europe. While ahead of the deep trough, a strong warm advection is underway across the eastern half of Europe. Delivering warm temperatures far north towards the Baltic region. 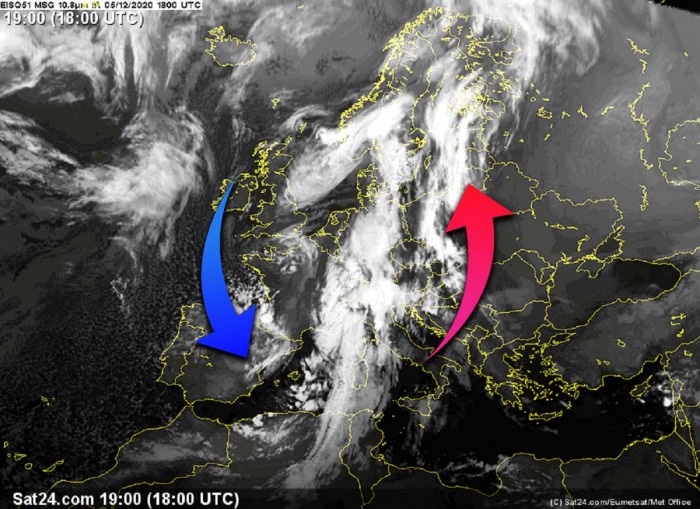 The large trough has continued moving south and significantly strengthened and deepened on Friday. It is now a dominant feature for the weather across the European continent until mid-next week.

Th upper trough has peaked on Friday, but it remains very deep also this Saturday. As it continues expanding south there is barely anything that can stop its southward progress as a strong upper-level ridge is placed to its west.

The trough is now split into two cores, one core has parked over the UK and the southern is moving across southwestern Europe, further south into the Iberian peninsula and the western Mediterranean. A very strong ridge is persisting over Russia. 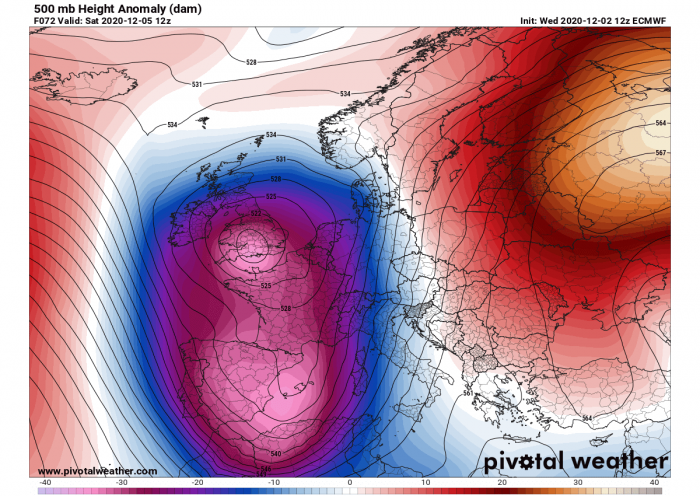 Typically this means that the warmer Mediterranean region gets a secondary low due to the advection of significantly colder air mass aloft. The surface low has formed over the northwest Mediterranean by Saturday morning, gradually drifting northeast while gaining strength and deepening through Saturday afternoon. 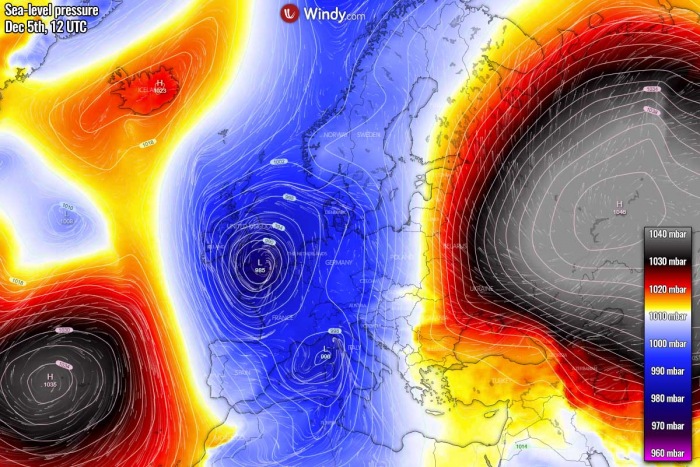 Both the upper core of the deep trough over the Iberian peninsula and the developing secondary surface low over the western Mediterranean will help the cold advection on the western side of the main trough to continue further south-southeast, reaching Morocco and Algeria as well. Very cold weather will spread over Spain and Portugal. 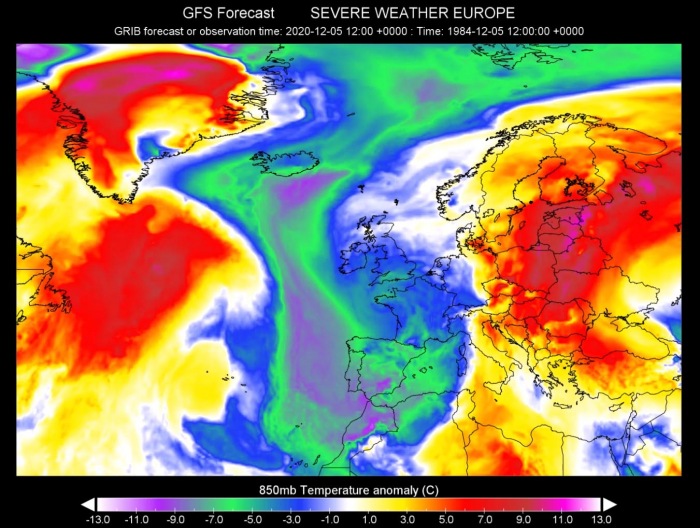 The advection of much warmer air mass continues to the east of the trough, spreading across the Balkan peninsula, eastern Europe, and the Baltic region. The warm air mass will result in the rapid melting of the accumulated snow over the northern Balkan peninsula this week.

As of tomorrow, Sunday, a large and deep trough cuts off over the Mediterranean. While it is gradually losing its strength, it remains deep and slowing down. The powerful ridge over Russia maintains its position, so further eastward progress of the trough is not expected. This is a recipe for an extremely dangerous situation for the Alpine region. 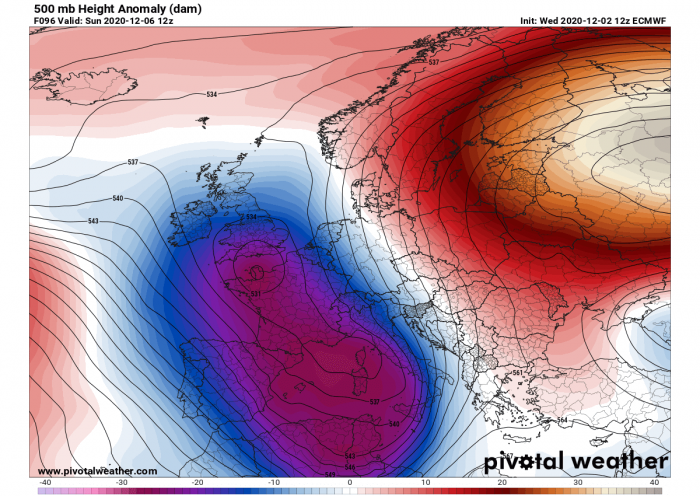 In response to a very powerful ridge over Russia, and associated surface high-pressure system strengthens there, nearly 1050 mbar will be in its center, to the north of the Caspian Sea. While a large surface depression/low over western Europe is weakening over the weekend, but the secondary low over the Mediterranean additionally strengthens on Sunday.

A Genoa low develops over the Ligurian Sea and drifts across northern Italy. 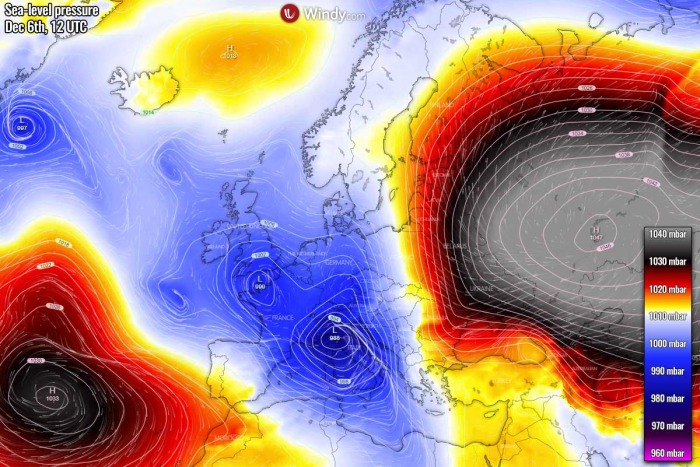 As the trough is weakening, the cold advection is also losing its strength on Sunday. It remains colder than average across the west, southwest Europe and the western Mediterranean, but not significantly cold anymore. Colder weather will also be the effect of a large pool of cool maritime air mass overspread across the region from the previous days. 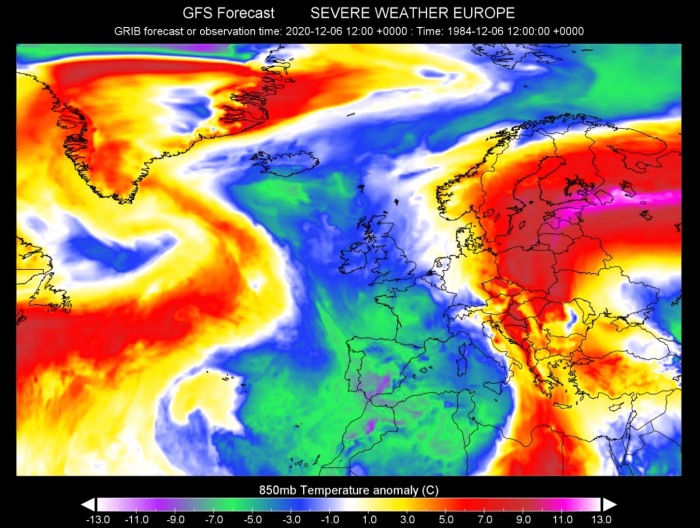 The warm advection over the Balkans, Eastern Europe, the Baltic region, and northwest Russia keeps strengthening, becoming quite extreme with more than 10-12 °C warmer air mass than normal for early December.

MAJOR SNOWSTORM OVER THE ALPS

What is likely the main and the most dangerous part of this pattern, is the potentially catastrophic outcome with a huge amount of rain and tons of snow over the Alps. The forecasted amounts of snow are so extreme in a relatively short period of time, that a *SIG/HIGH RISK* for avalanches and flooding has been issued over the weekend.

As we have discussed earlier, a rather classic pattern evolution is expected over Europe, this means a deep large upper-level trough and deep low over western Europe with a secondary surface low forming over the northern Mediterranean.

A textbook so-called ‘Genoa low’ cyclogenesis has formed over north Italy early on Saturday and will move towards the northeast through Sunday while deepening. 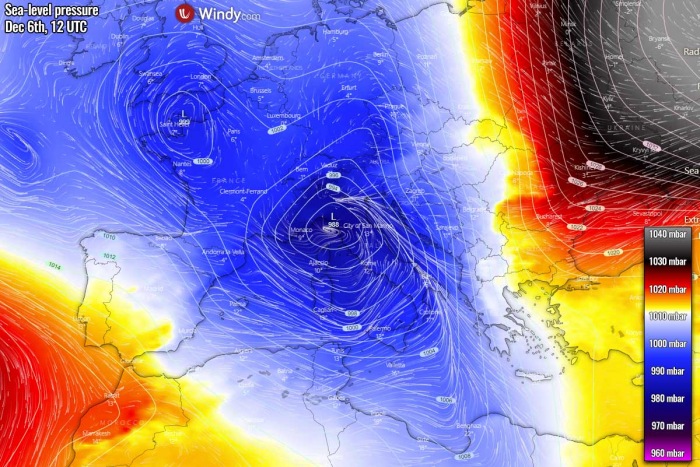 This typically means that conditions are rapidly worsening over the Alps, as both the warm advection from the Mediterranean and the wind field are increasing. In other words, this is a textbook environment for intensifying orographic rainfall or snowfall for the northern Mediterranean region.

And what is shaping up regarding the amount of precipitation this weekend, is a real concern.

Attached below is the general picture for precipitation sums over the next 3 days, so from Saturday through Monday. We can see that an additional extreme amount of precipitation is forecast for the southern Alpine flank, about 400-600 mm is forecast by the weather models.

A lot of rain is also forecast for the northern Apennines and western Balkans along with the low-level jet streak. 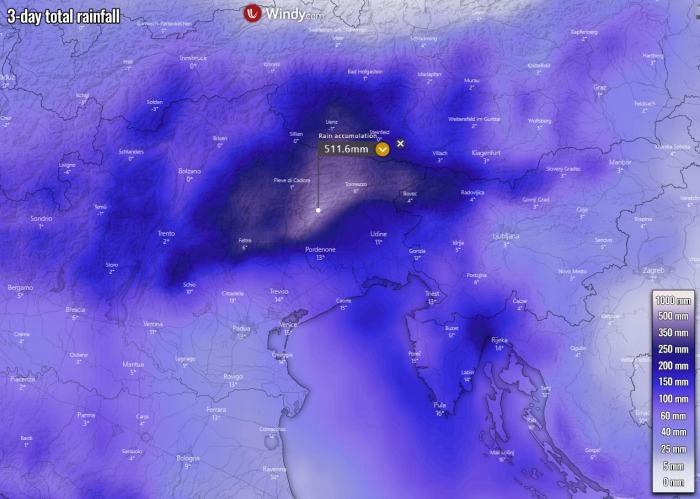 The majority of this rainfall comes from Saturday afternoon until Sunday evening, as most of the precipitation will be associated with the deep secondary Genoa surface low over northern Italy over the weekend. So the amount of rain will accumulate within a short 36-hour event!

Here is a closer look over northeast Italy where the maximum is likely to occur. ICON-EU model hints even more than 500 mm! Such an amount will worsen the ongoing severe flooding threat in the lowlands along the slopes.

As snowfall is occurring above 1500 m above sea-level, the melting of existing snow is also contributing to additional water for the rivers. 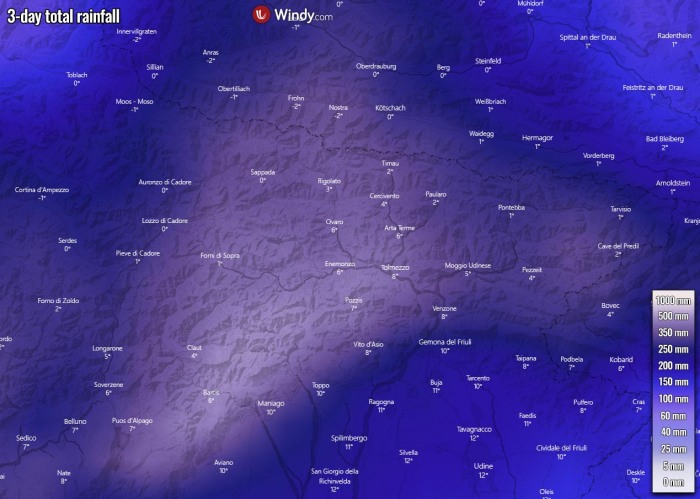 In addition to the extreme rain and flooding threat, the EXTREME amount of snow is forecast with this winter storm. The overall temperature over the Alps is resulting in a very intense snowfall above 1600-1800 m elevations and will be gradually going lower from Saturday night into Sunday with some colder air mass coming aloft.

Based on the recent reports of 100-150 cm fresh snow in the past 24 hours and the precipitation forecast above, the total amount of snow will be beyond exceptional by Sunday evening.

Both global, the GFS and ECMWF, and also the high-resolution ICON-EU weather models are forecasting a very high amount of snow. An additional 200-350 cm (12 feet) of fresh snow is forecast over northeast Italy into southern Austria. Another 100-150 cm of snow is also forecast further west over the west-central Alps. 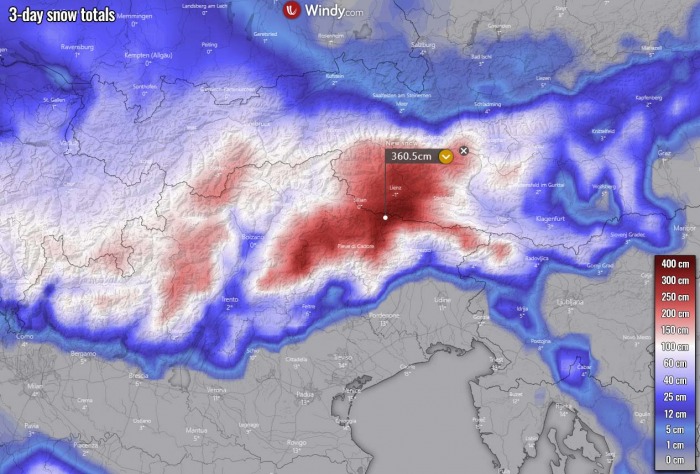 Here is a closer look over the region where peak snow amount is forecast. The ICON-EU model actually hints at the potential for more than 350 cm of snow over the next 3 days. And keep in mind, that the majority of it will fall over a period of 24-36 hours from Saturday afternoon/evening until Sunday evening. 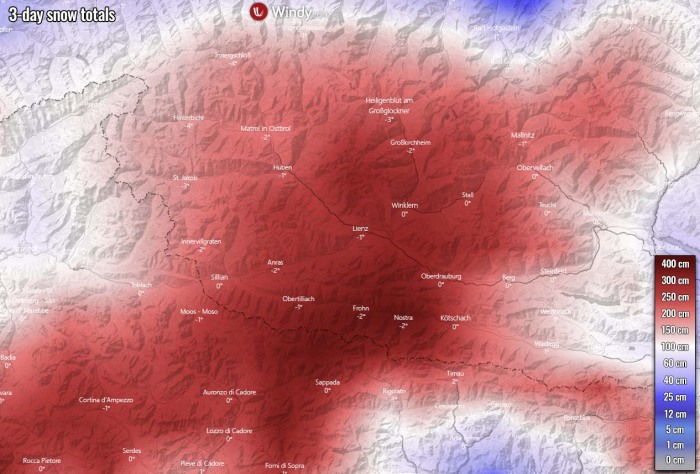 Such forecast amount with potentially an additional 500 mm of precipitation and also 300+ cm (3 meters or 10 feet) of fresh snow accumulating until Sunday evening has introduced a *SIG (significant) and HIGH RISK* for flooding and especially an extremely dangerous avalanche risk for the region.

The impact to the slopes and some Alpine valleys in the most-affected areas could be catastrophic.

As models have been hinting over the past days, a *particularly dangerous situation* is expected to develop across the Alps on Sunday, December 6th.

An extreme amount of rain and snow will result, with local rainfall sums reaching another 500+ mm over the already high 300-400 mm of rainfall totals by Saturday.

This means that more than 300 cm of fresh snow seems increasingly likely above 1800 m elevation over these areas by Sunday evening!

A combination of excessive rainfall, snow melting, and snowfall at higher altitudes could lead to damaging flooding and avalanches in the region!