We often hear the term “polar vortex” as we head closer to winter. But this season, we will talk about it earlier than expected. We recommend you read our tutorial article, on what is the polar vortex and why is it so significant for our weather?

Currently, the stratospheric polar vortex is strengthening, almost reaching near 40-year record high strength for this time of year at the 10mb (~30 km) level in the next few days. 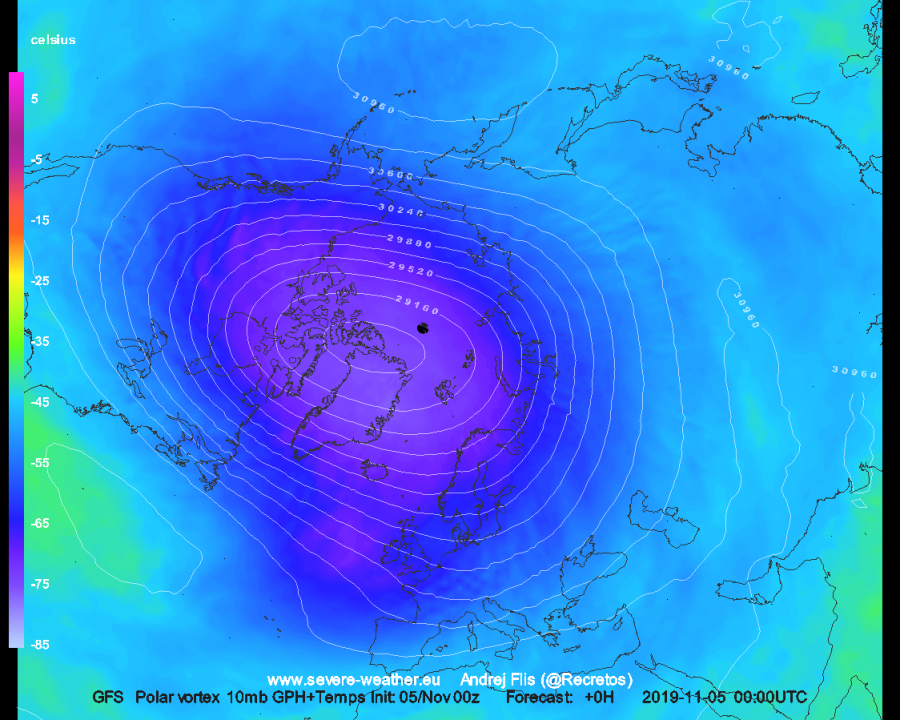 GFS temperature and height analysis of the stratospheric polar vortex. Image by: SWE

November and early December, are periods when the polar vortex undergoes maximum intensification. Days are getting shorter, the pole is cooling and the pressure is dropping. If the polar vortex intensifies during this period to high power, it is very likely that it will help to create or boost a positive NAO pattern, meaning a milder winter. That is exactly what the model forecasts are currently indicating for winter. A strong stratospheric polar vortex also increases the polar circulation in the lower levels, which can lock the cold air in the polar circle, resulting in a boring winter.

But weather is always dynamic. It goes through changes on a daily and hourly basis all around the world, interconnected on multiple levels. Sometimes we have a more dynamic and active weather pattern across the Northern Hemisphere. More dynamic global circulation patterns (higher number of strong high&low pressure systems), can exhibit a lot of energy in various forms. If the dynamics are in the right place, they can radiate/deflect some of that energy upwards into the higher levels of the atmosphere. When/if that energy reaches higher atmospheric levels (and strong enough), it can cause warming and pressure on the stratospheric polar vortex, in the form of waves. They help slowing it down, weakening it and in some cases when the disruption/warming is strong enough, we can completely destroy/displace the polar vortex, and warm up the polar stratosphere. That is called a Sudden Stratospheric Warming event (SSW). The criteria for designating such an event, is the wind reversal in the polar stratosphere, which means that the polar vortex has lost its strength, and the polar high (“anti-vortex”) is dominating. So not every warming is an SSW event, because we also need to remove the polar vortex from its frozen throne. With some time delay, as the polar vortex weakens, the pressure also usually rises on the surface over the Arctic, which means the cold polar air can move more easily down south towards Europe or USA. 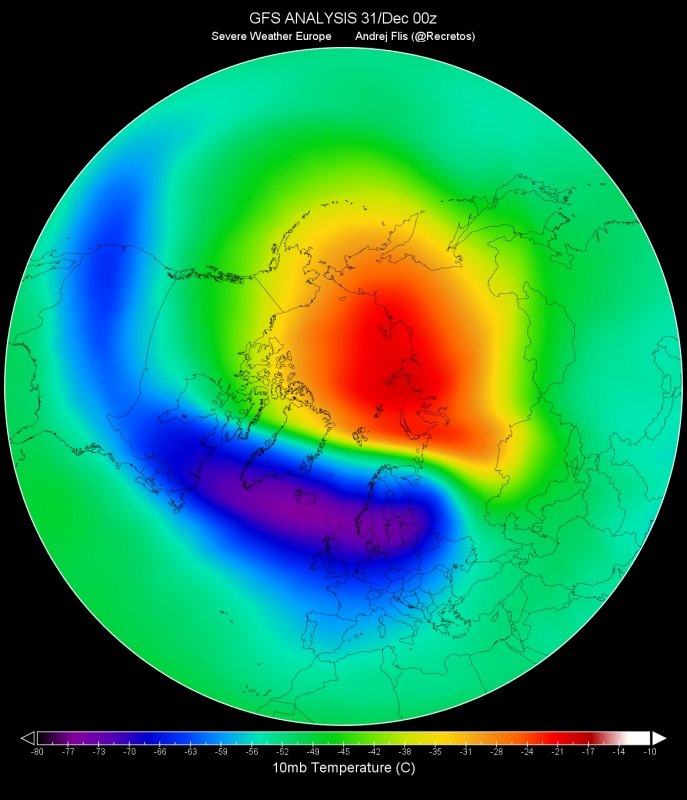 Current forecasts are indicating a first minor warming event is likely by late November. It is currently not indicated that major polar vortex disruption will take place, but the polar vortex will weaken by an impressive degree on current forecasts. We can see on the GFS forecast below, the minor warming over east Asia, and a polar high, forming in that area. We have to keep in mind, that model forecasts are much more accurate in the far end for the stratosphere, compared to the surface forecasts, where we need to look at ensemble averages. 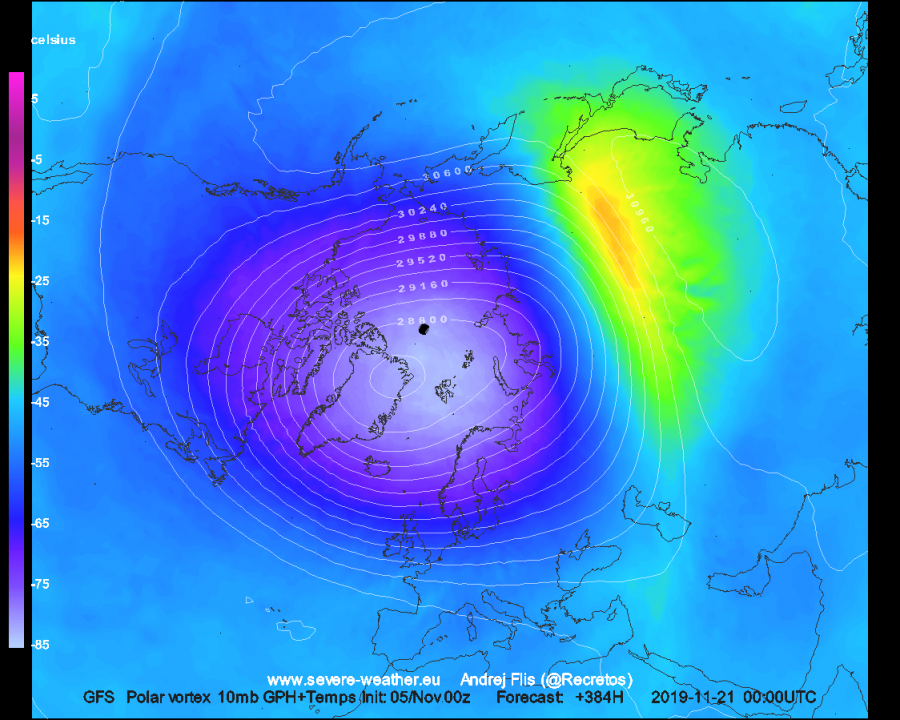 GFS model forecast of the polar vortex and the minor warming event at 10mb level. Image by: SWE

The GEFS ensemble forecast shows the forecast for the strength of the stratospheric jet stream at 30km height, also known as the polar night jet. We can see the increase in the coming days, and then the power decrease as the warming slowly starts, combined with the pressure wave in the stratosphere. When/if this polar jet reaches 0 or goes into negative values (reversal), is when a warming event is classified as an SSW. The current events are not classified as an SSW, since it takes an enormous amount of energy and effort to disrupt the polar vortex to such a degree. But these events are an important step on the way towards winter, since they keep the polar vortex from going berserk and dominating the entire winter at full power. That is, if more such minor warming events would follow. 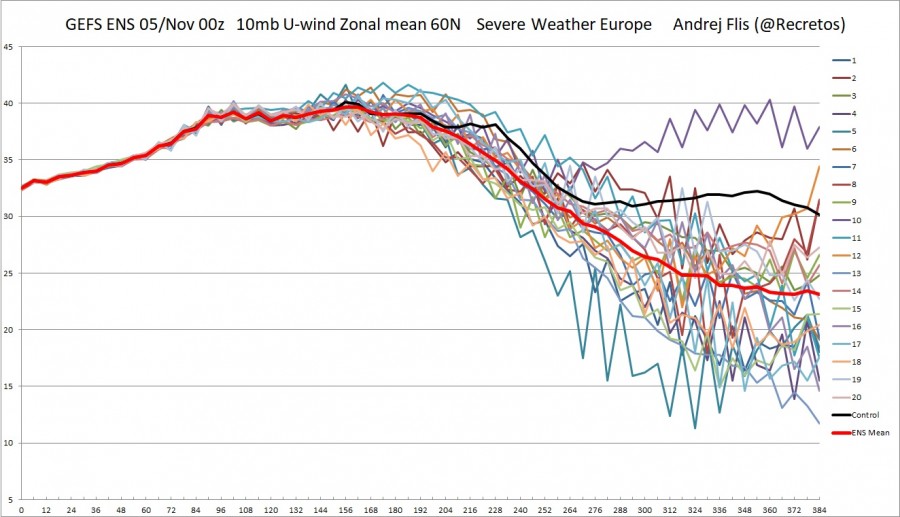 So, will more such events follow? To answer that, we must first look at what drives this first event. There were 36 SSW events in the past 60 years. We can take a few that happened in early winter, and look at the weather patterns around 30 days before these SSW events happened. We can see the surface pressure anomaly below, 20-30 days before the SSW events occured. The high pressure over Siberia and northern Europe is obvious, which helps to send energy waves upwards into the stratosphere, combined with snow cover expand across Siberia and complex terrain topography. We also see lower pressure over the North Pacific area.

Surface pressure and 500mb anomalies prior to an SSW event. Image by: NOAA/CPC

Looking at the actual pressure anomalies forecast, that is exactly the pattern that we see above. Strong positive anomalies over Eurasia, and low pressure in northern Pacific. Such configuration is good for sending pressure/energy waves upwards into the stratosphere, and putting the polar vortex under stress. If such a pattern would realize and persist for enough time, the chances increase for an SSW event before the end of the year, which would increase the chances for colder winter weather in January and February across Europe and parts of USA, opposite to the long range forecasts. The key part here, is pattern persistence. 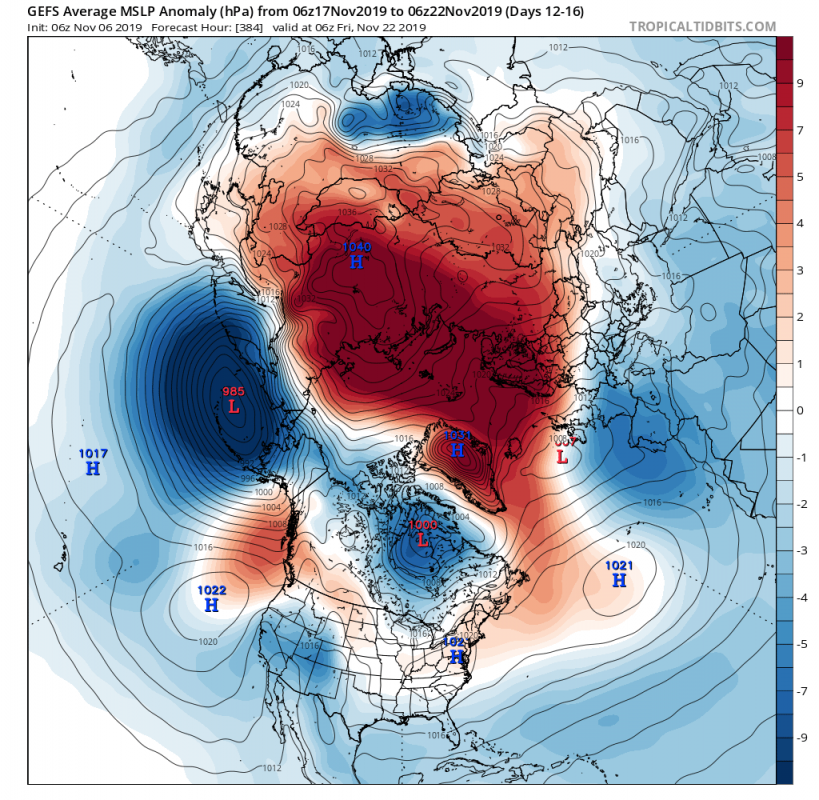 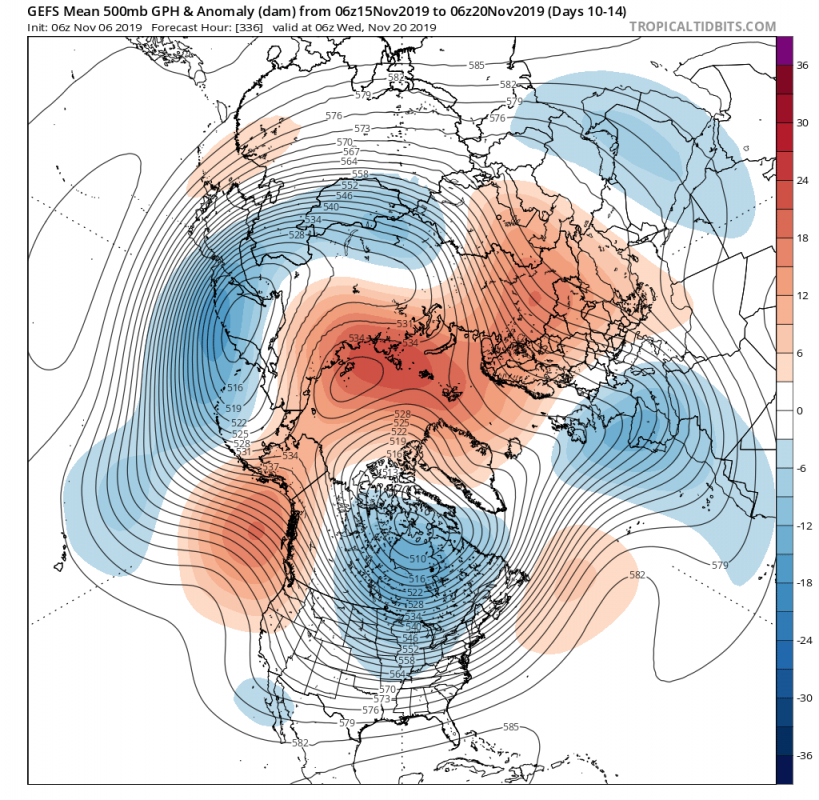 We can see the stratospheric warming on the temperature anomaly forecast from GFS at 10mb (~30-32 km), where the temperature over east Asia is forecast to rise to more than 20°C above the long term average. The GEFS is an ensemble model, so it naturally shows weaker warming in the far end of the forecast, since it is an average of 20 individual forecasts. But the signal is present and clear. 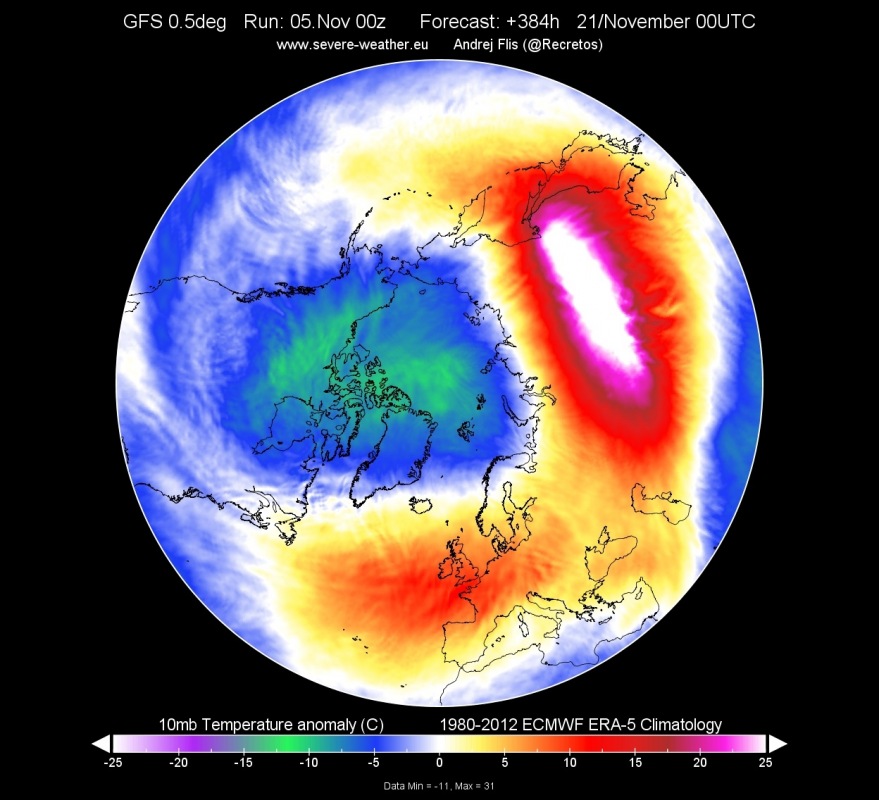 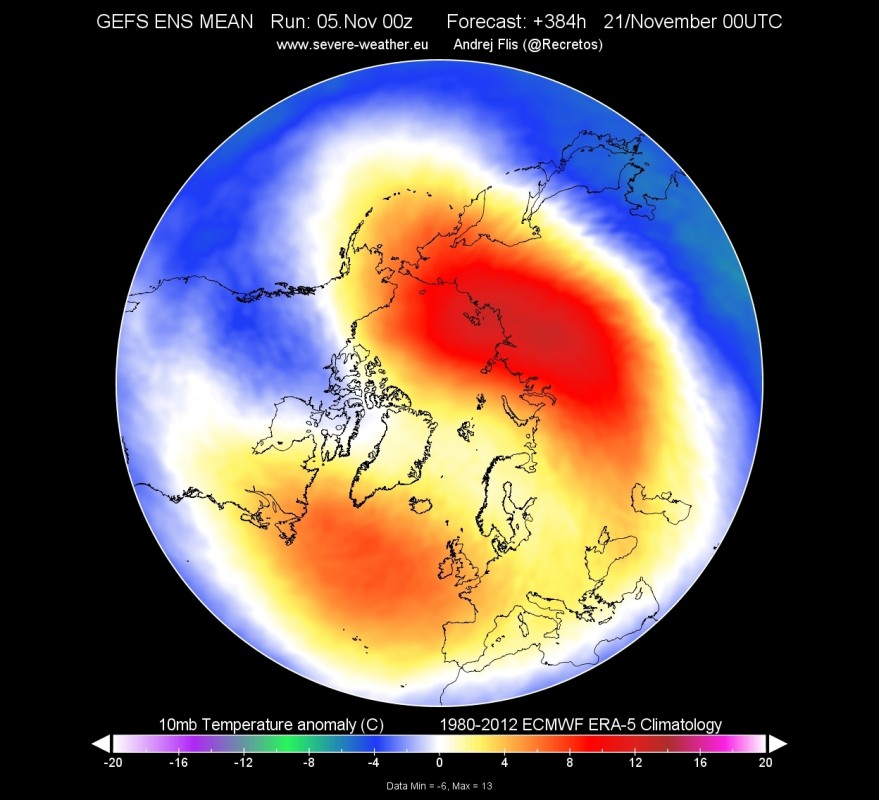 We will keep you updated, but while you wait, check out the latest long range winter forecasts, from various models around the world: