There is a major (winter) storm shaping up for the eastern United States soon after the Thanksgiving holidays. A significant cold blast will develop into the southeast states, introducing a deep surface low with a strong cold front. Winter weather is forecast to blast from the north, with dangerous blizzard conditions over the Ohio Valley and the Great Lakes. The frosty morning will be possible deep south to Florida.

The final days of November will bring a significant change in the weather pattern across the United States. A blocking pattern will develop across the western CONUS, with an upper-level ridge building into western Canada. As it typically happens with such a pattern evolution, an upper trough will form on its eastern side, sliding towards the south.

The southward progression of the trough/low usually follows the more meridional flow establishing along the eastern flank of the blocking ridge. This means that the pattern introduces a cold advection from the north towards the south. As a result, winter weather is forecast to blast across the eastern Contiguous United States early next week, including the Southeast US and the Mid-Atlantic.

The cold blast will be quite significant and is forecast to bring cold weather deep far south across the southeast United States. Therefore, morning frosts seem quite possible to develop across Alabama, Georgia, and also northern Florida through mid-next week. 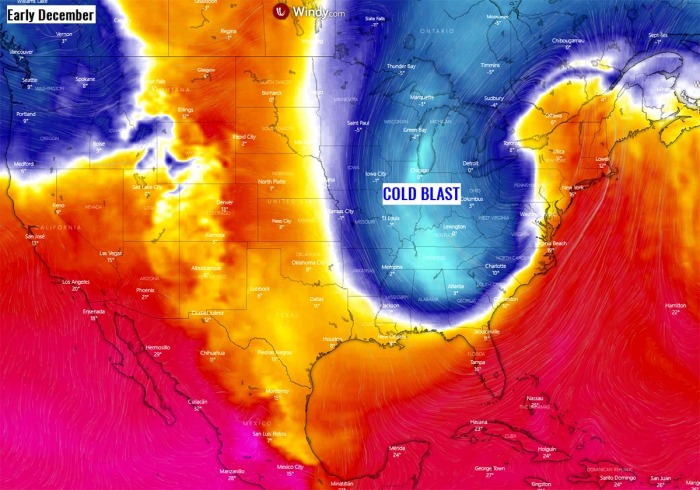 But ahead of the winter storm forecast to arrive on Monday, the Gulf will respond to the strengthening surface low over the southeastern United States at the same time. Meaning that a very moist and warm air mass advection will take place towards the Mid-Atlantic coast. This will introduce an environment conducive for a severe weather potential from Florida across Georgia into the Carolinas.

A major storm will first impact the Deep South with a deepening surface depression on Sunday. An intense storm will be gradually intensifying while drifting across the East Coast through Monday, reaching the Northeast United States on Tuesday.

The event is forecast to develop a significant winter and snowstorm over the Midwest and into the Great Lakes region on Monday into Tuesday, potentially resulting in a powerful snowstorm around the Lakes. Severe blizzard conditions are expected to strongly impact traffic and outdoor activity on Tuesday.

Further south, heavy rain with local flooding will be accompanied by the sharp cold front racing towards the Mid-Atlantic coast on Monday. A high-pressure gradient around the deep surface low will also result in strong to severe winds across the eastern third of the country.

December will therefore start with very cold days as the cold blast should bring the air mass more than 15 degrees Celsius colder than average for this period, especially across the Southeast United States including Florida.

It appears increasingly likely that bad weather conditions could cause significant travel disruptions across the eastern United States through early next week.

The change is the overall weather pattern starts over the weekend, with a surface depression beginning to organize along the central Gulf Coast on Sunday. The surface low forms in response to a shallow upper low moving east across the southern United States, crossing paths with another trough emerging south across the Midwest.

Both troughs merge together and the result is an additional advection of the mid/upper-level cold air mass along the eastern flank of the upper ridge. The ridge is strengthening across the western United States in the meantime. Basically, this develops a textbook dipole pattern across the country on Monday. 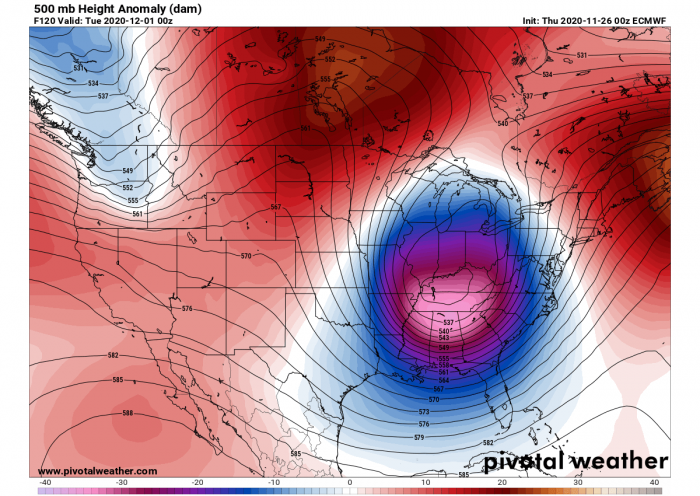 The persistent cold advection coming with the meridional flow from the north causes a significant deepening of the trough traveling across the Southeast US into the East Coast. And so will the surface low deepening further while drifting northeast from Monday through Tuesday. A strong surface high-pressure system maintains further west. 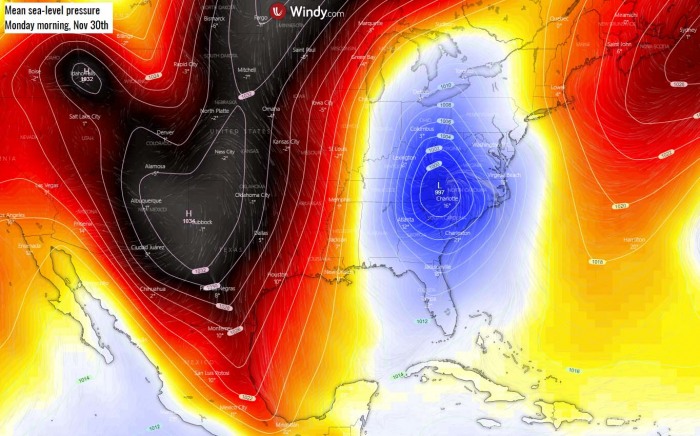 The surface low is deepening while moving northeast through Monday afternoon, likely reaching below 990 mbar in its center by the evening hours. Its forward progress will be quite fast as the low will already be over the Northeast United States on Monday night. 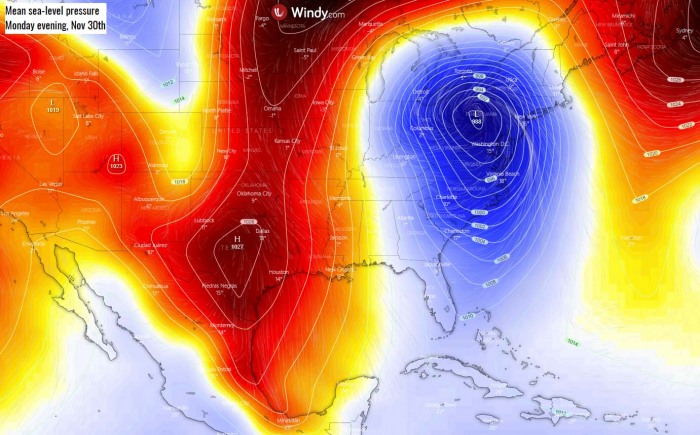 The trough and the associated surface low will mature on Tuesday, and begin losing its forward speed, even retrogrades back west a bit due to the blocking high to its north. Normally, a trough would eject northeast fast, but the pattern slows it down and weakens it by mid next week. 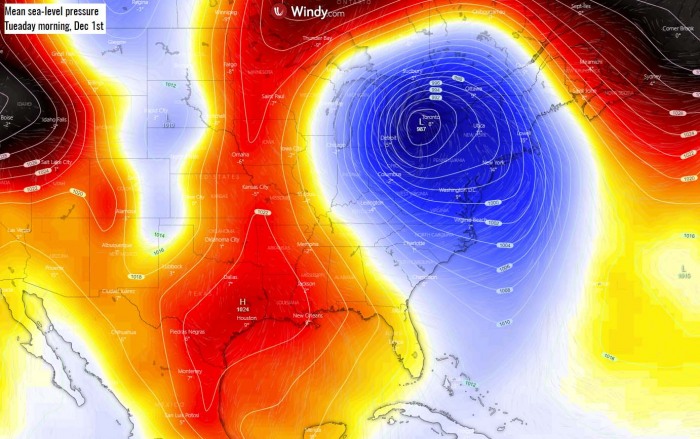 While the pressure does respond to strong to severe winds across most of the eastern third of the States, the main focus will remain on the strong surface front racing east with a much colder air mass spreading behind it.

As the low begins deepening along the Gulf Coast over southeast Texas and southern Louisiana on Sunday, the surface frontal system will also be organizing. Heavy rainfall, which will be ongoing over the region since Saturday, will intensify and gradually spread northeast into the Southeast United States through Sunday evening. 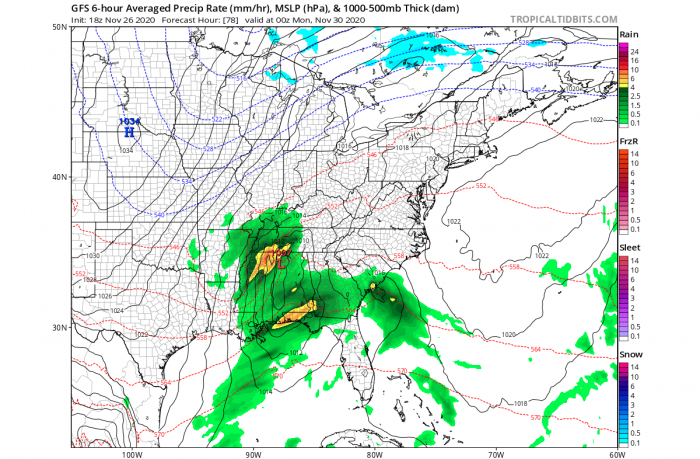 Meanwhile, the cold advection arriving from Canada will begin spreading across the southern United States as well, pushing behind the surface front down to the Gulf Coast by the Sunday evening already. We can see that the cold channel establishes a connection far north into Arctic Canada. 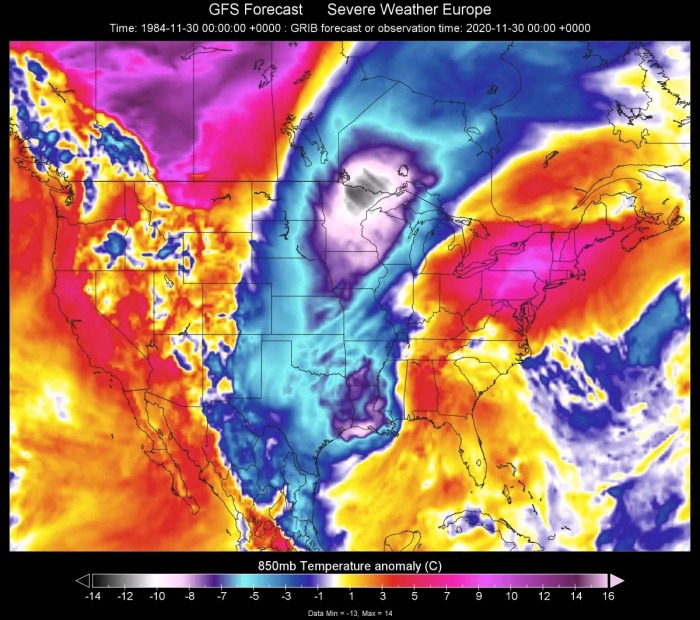 The air mass ahead of the front will still be warm, quite significantly warmer across the Northeast.

Weather conditions begin worsening by Monday, as the surface depression continues deepening and gradually accelerating its forward speed towards the northeast. By the afternoon hours, the front with potentially some severe storms, will already reach the Mid-Atlantic coast and eject into the Atlantic ocean by the evening hours.

In the meantime, the backside of the low will develop very heavy precipitation across the Ohio Valley and towards the Great Lakes. Further west across the Midwest, cold advection will already introduce heavy snow. Winter weather is the first forecast across Illinois and Indiana first, then further north into Michigan as well. 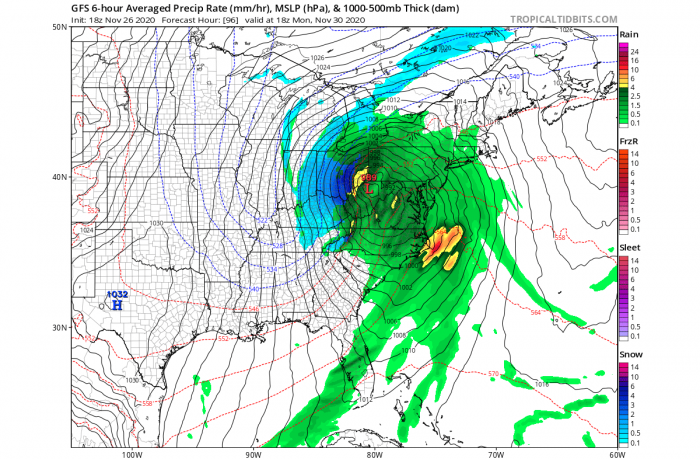 The cold advection is forecast to be very strong on Monday, as the upper cold-core low will deepen significantly. This will result in a very cold air mass to continue spreading further south. A powerful cold pool will overspread the Southeast United States until the Monday evening hours, with temperature even more than 15 °C lower than normal for the region. 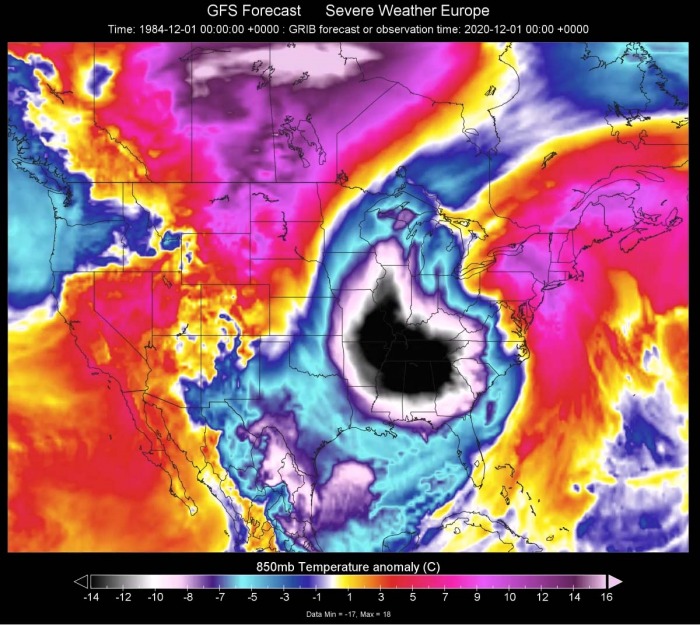 The first day of December (Tuesday) will see some bad winter weather, as snow and blizzard conditions are forecast to continue over the Great Lakes region. The tight pressure gradient will support strong to severe winds on the rear side of the surface low, so whiteout conditions and building snow drifts are likely from the Upper Ohio Valley further north-northeast into the Great Lakes. 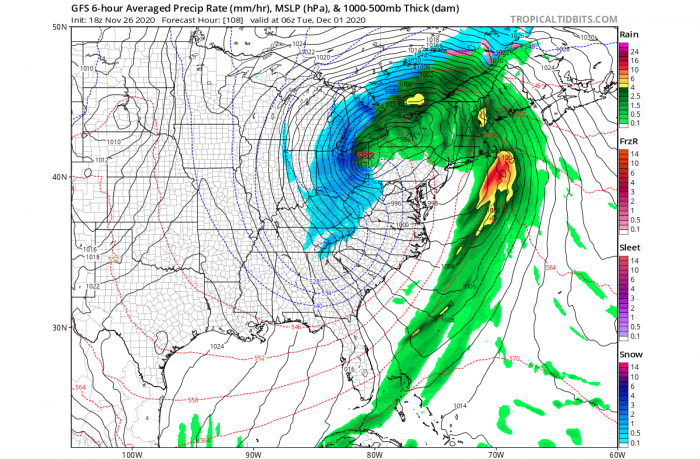 Some snow is also forecast towards the Appalachians, as moisture advection on the wake of the low should support snowfall further south as well.

Temperatures will remain much colder than average, still more than 10 °C colder within the core of the upper low. Although the cold pool will begin gradually losing its strength, Tuesday will remain very cold across the eastern United States. 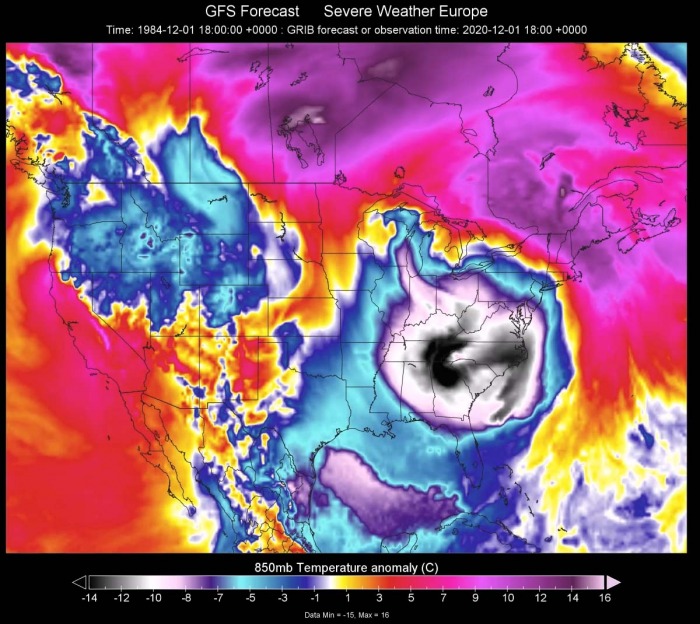 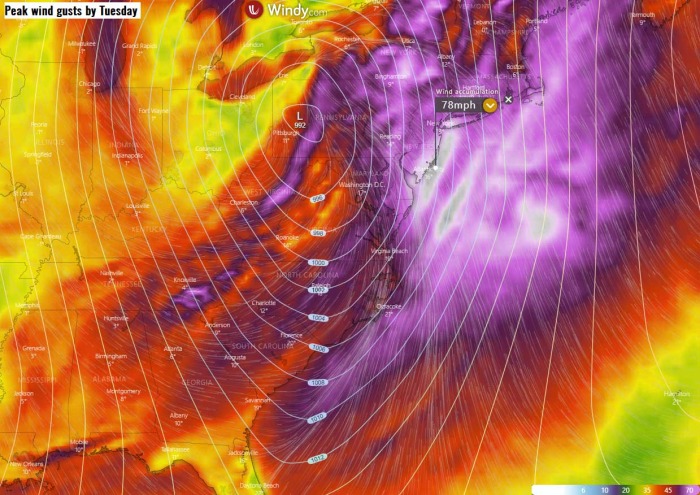 Winds will be the strongest and could cause some damage along the coasts of New Jersey, New York, Connecticut, Rhode Island, and Massachusetts. Even more than 75 mph peak gusts are possible.

Another important thing to note is the quite high potential is there, that the air mass will also bring very cold mornings on both Tuesday and Wednesday. Especially across the deep south of the Southeast United States, while the low with stronger pressure gradient will be moving away.

In other words, the departing low results in weakening winds far away from its center, allowing night temperatures to shoot very low. Tuesday will bring very cold morning across Louisiana, Mississippi, Alabama, and Georgia as well.

Temperatures will be near freezing also down to the Gulf Coast, e.g. New Orleans or along the coast of southern Mississippi and western Florida peninsula. It will be much colder further north. 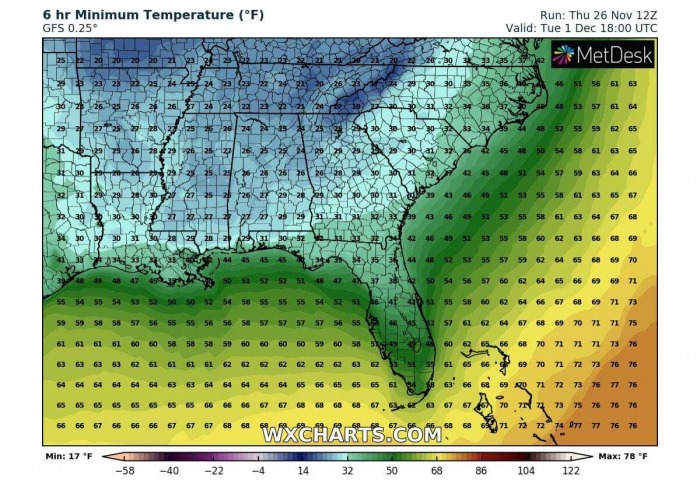 And another cold day is also expected on Wednesday, as the large cold pool will be still strong enough to introduce cold temperatures within weak winds in the morning. The temperature should again slide below zero across Mississippi, Alabama, most of Georgia and also northern Florida, and the Panhandle as well. 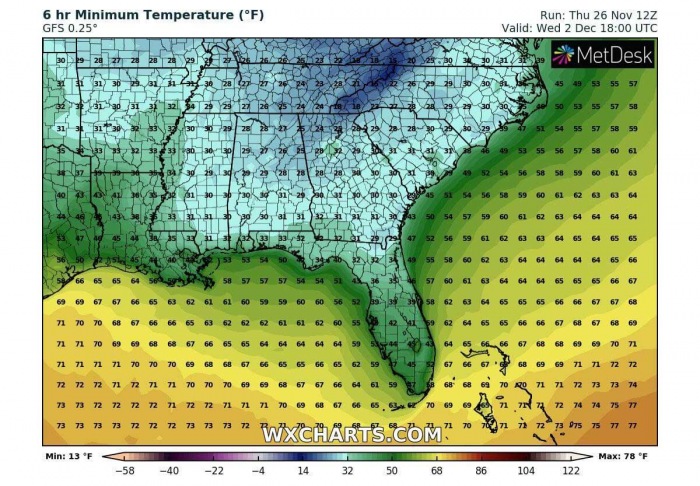 It will also be a few degrees colder across the rest of Florida, with the mid to upper 30s in central Florida.

SIGNIFICANT SNOW EVENT FOR OHIO AND THE GREAT LAKES

As mentioned above, the heavy snow blizzard event with significant winter weather is forecast for the Great Lakes region on Tuesday. As it typically happens, a deep surface low in a combination of the cold air mass introduces a dangerous blizzard and blowing snow conditions. 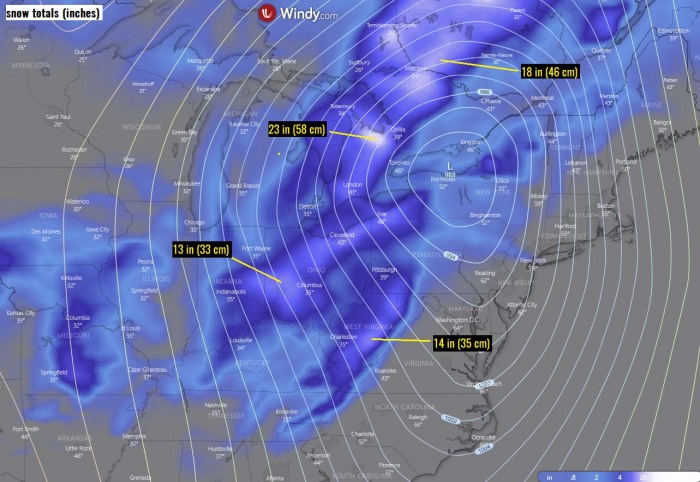 The blizzard conditions will be the worst when the pressure gradient will be the strongest. Great Lakes in particular should experience these conditions. There, whiteout conditions could last through the whole Tuesday.

According to the latest model trends, the above map indicates that the highest amount of snow will accumulate across the Ohio Valley and around the Great Lakes, as well as the Appalachians where orographic lifting normally brings a lot of snow there.

10-15 inches of snow will be possible in parts of Ohio and the Appalachians, even more, further north around the Lakes and across the International US/Canada border.

Dangerous snow blizzard conditions and winter weather are forecast to gradually improve through Tuesday night into Wednesday as the surface low and the frontal system finally weakens.

THEN, EXTREME WARMTH DEVELOPS OVER CANADA

Here is something additional that has a strong model tendency to develop/follow after this winter weather event next week. As we mentioned earlier, the main reason for the development of the significant cold outbreak in the eastern United States is the strengthening upper-level ridge further west.

What the global model guidance is lately suggesting is the development of an extremely strong ridge further north across western and central Canada by Thursday next week. 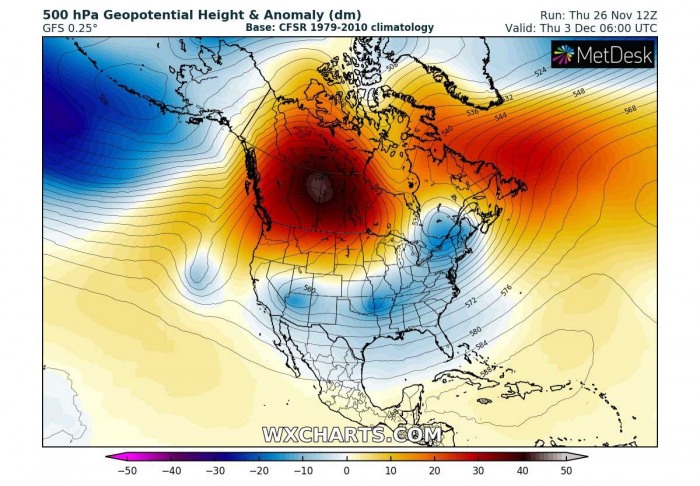 Such a blocking high-pressure system normally trends into much warmer temperatures, especially through the mid-level parts of the troposphere (e.g. 850 mbar level or approximately 1500 m above sea level elevations). While the first days of December will remain quite cold across much of the United States, it will be *much* different over Canada.

As we can see from the 850 mbar temperature anomaly image below, much of Canada, including Arctic Canada and also a large part of Alaska will experience much higher temperatures than normal for early December. 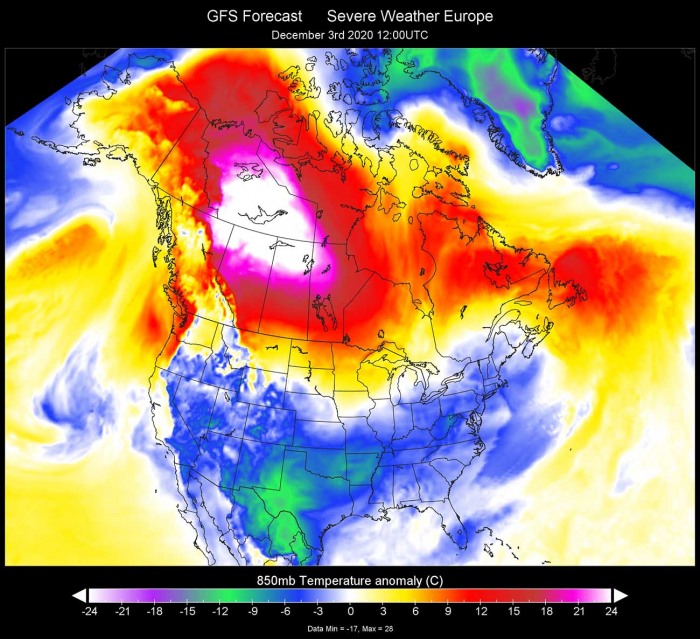 Actually, the temperature anomaly across northern Alberta, Manitoba, and Northwest Territories will be beyond exceptional. As we can see, the temperature at this 850 mbar level will be more than 25 °C warmer than the long-term average. This is very extreme for the region!

Indeed, the translation of these extremely warm mid-level temperatures to the ground levels is often not happening, as strong thermal inversions could be trapped under the upper ridge during winter months. But this time, a powerful North Pacific cyclone will occur, so a strong southwesterly flow and warm advection will be ongoing into western Canada.

Therefore, a Chinook foehn wind event could occur from the eastern slopes of the northern Rockies down into the Alberta prairies. This could bring some unusually warm days in the state!

We are closely monitoring the evolution of this significant pattern dynamic over the North American continent. Stay tuned for further updates in the coming days!