The bomb cyclone traveling along southern Greenland has peaked on late Wednesday and is now moving towards Iceland. A major windstorm introducing hurricane-force winds has formed to its south, spreading huge, near 15-meter (50 feet) sea waves towards Iceland this Thursday. A severe blizzard is also expected further inland.

A deep North Atlantic low is moving off the coast of southeast Greenland and is now approaching Iceland. It is accompanied by intense winds and significant sea waves up to 15 meters (50 feet) high.

An intense bombogenesis has been ongoing from late Tuesday to Wednesday afternoon, with the pressure drop for more than 40 mbar within the 36 hours period. The rapidly deepening central pressure and tightening pressure gradient has developed violent winds.

The system is producing extremely severe, hurricane-force winds to the south of the core, exceeding 150 km/h. And especially major waves, gradually spreading towards Iceland today (Thursday). 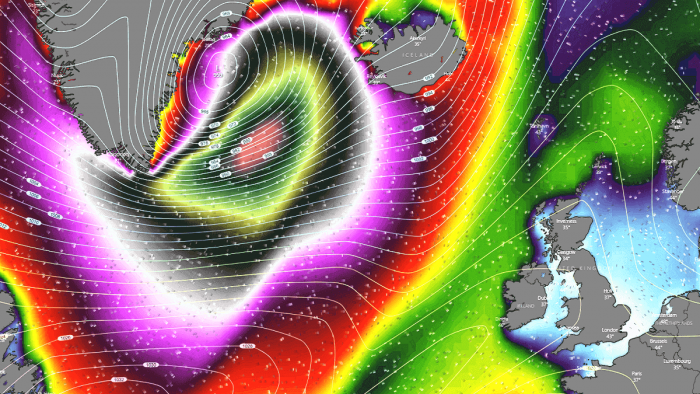 The latest weather model data confirm that major and damaging waves with heights up to 14 meters (45 feet) could reach western Iceland this evening. Those are expected to continue over the western half of Iceland through the rest of Thursday (today and tonight).

On Tuesday afternoon the center of the circulation was located over far eastern Canada, to the immediate north of Newfoundland and the Gulf of St. Lawrence. A very cold air mass was spread behind the low as a high-pressure system is building up over eastern Canada.

The satellite animation in various specters reveals a deep low moving gradually northeast along the southeast Greeland, approaching Iceland. A significant push of the convective clouds can be seen to the south of the low. There, severe, hurricane-force winds continue and favor major waves.

As of Thursday morning, the low was maintaining its central pressure around 956 mbar, located just off the coast of southeast Greenland at 06 UTC today.

Here are details for the mean sea-level pressure estimates by the NOAA. From when a depression which began over far eastern Canada on Tuesday, explosively deepened over the Labrador Sea on Wednesday and has been trailing along southeast Greenland until Thursday morning: 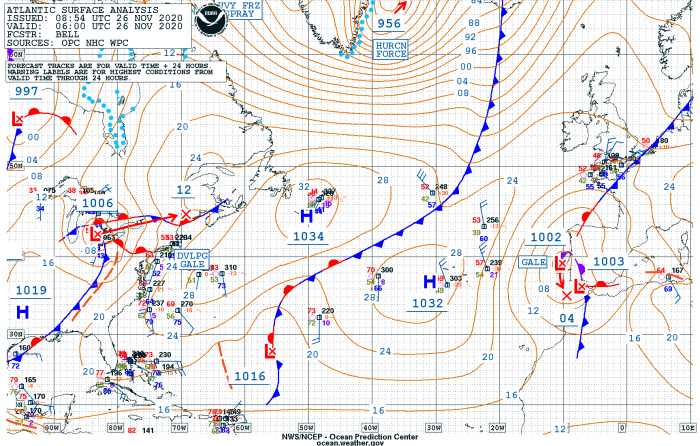 The central surface pressure of this deep low has reached 956 mbar on Wednesday afternoon, the low finishing its rapid intensification phase. The pressure change was from 982 mbar to 956 mbar over the past 24 hours by Wednesday 12 UTC.

This means that a pressure change was a 26 mbar pressure drop over the 24 hours period.

It is beyond the threshold for explosive cyclogenesis of rapid intensification* of a surface low. The pressure has then been fluctuating around its peak until Thursday morning.

There was also a very impressive 44 mbar pressure drop over the 36 hours period between Monday 18 UTC and Wednesday 06 UTC.

Rapid intensification* – The definition for a rapidly deepening low is a 24 mbar pressure drop in the past 24 hours period. This also classifies the low as a bomb cyclone or a bombogenesis.

SEVERE BLIZZARD AND STORM SURGE ALONG THE COAST OF ICELAND

The Icelandic Met Office has issued several yellow/orange warning, in effect for Faxaflói, Breiðafjörður, and Westfjords where the worst conditions are expected: 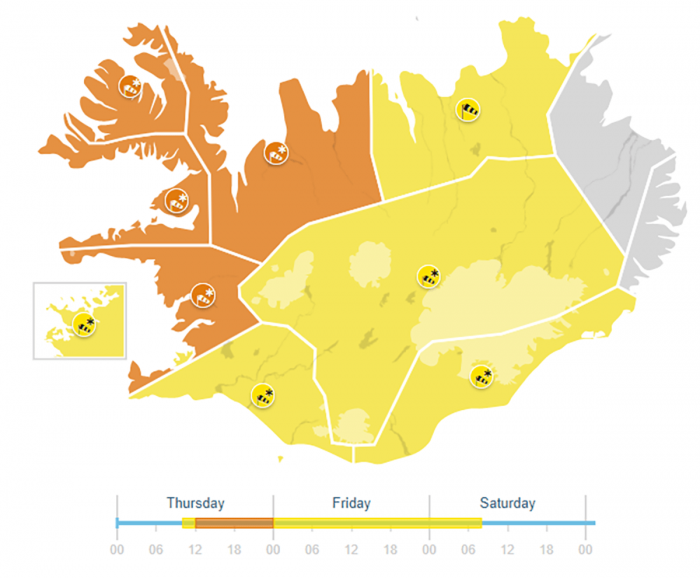 Southwest 18-25 m/s and heavy snow showers with very poor visibility at times and hazardous driving conditions. Mountain roads in the area may become impassable. Elevated sea level can be expected due to storm surge.

Southwest 15-23 m/s expected with snow showers that can result in poor visibility and hazardous driving conditions.

EXPLOSIVE DEVELOPMENT OF THE SURFACE LOW

As we can see from the surface pressure forecast tonight (Wednesday 00 UTC), the low is already moving into the Labrador Sea while it continues rapidly deepening. The central pressure should fall into the low 970s or even lower already by early morning on Wednesday. 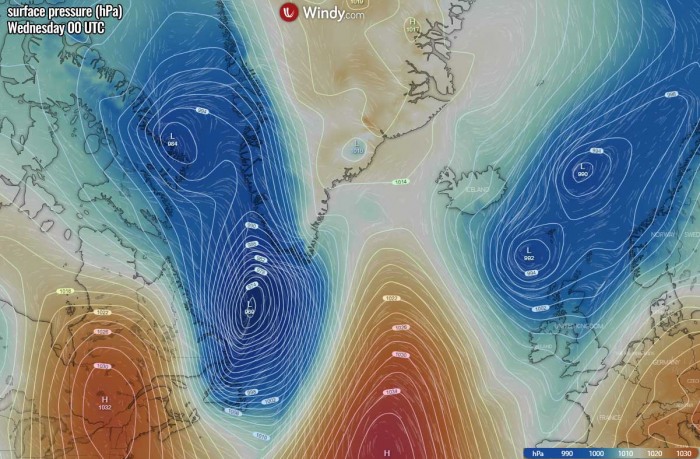 By Wednesday 12 UTC, the low will continue deepening towards the peak intensity. The central pressure will likely push into the 955 to 960 mbar range. This means that the approximate pressure drop from Tuesday morning (00 UTC) will be around 40 mbar.

The low will travel along the coast of the extreme southern tip of Greenland on Wednesday afternoon. At the same time, a strengthening upper-level ridge and surface high-pressure system will expand into the Northwestern Atlantic.

This will create a very tight pressure gradient in between, nearly 80 mbar difference between both large scale features. 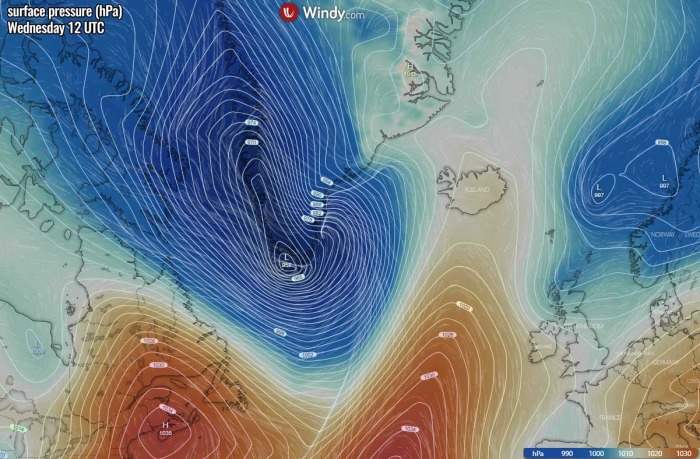 Weather models are then shifting the low further northeast along the coast of Greenland. The low peaks on Wednesday night with the central pressure near 952 mbar. The pressure gradient tightens even more to its immediate south, thanks to the strong high-pressure system remaining over the Northwest Atlantic. 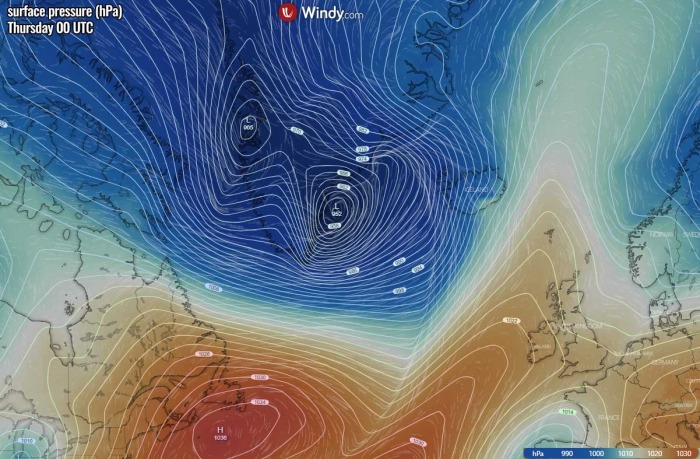 The low continue drifting northeast through Thursday, remaining just off the coast of southeast Greenland. Although the central pressure will be gradually rising, it will remain below 960 mbar until the evening hours.

An impressive tight pressure remains to its south, now spreading towards Iceland. In other words, the higher the pressure change, the stronger the winds. 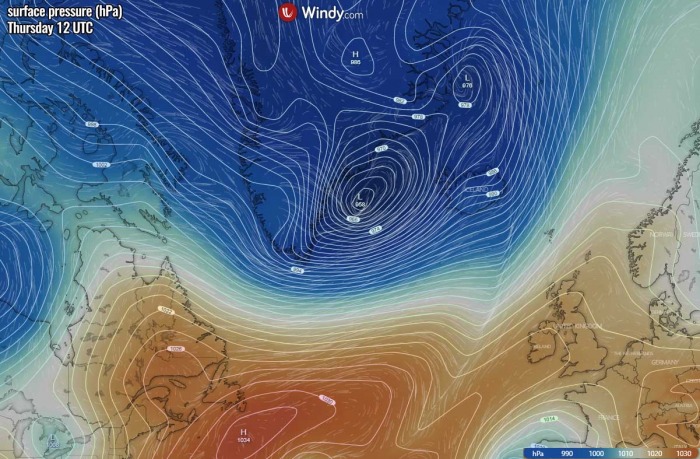 Finally on Thursday night into Friday morning, the low moves further northeast across the Denmark Strait, traveling to the north of Iceland with its center. The Denmark Strait or Greenland Strait is an oceanic strait between Greenland to its northwest and Iceland to its southeast.

While the pressure will rise into mid 960s, the strongest pressure gradient will be across Iceland on Thursday night. In addition, a textbook downslope flow will develop from the Greenland plateau with a strong pressure gradient developing along the southeast part of Greenland. This is caused by the huge temperature/pressure difference between the plateau and the coastal areas. 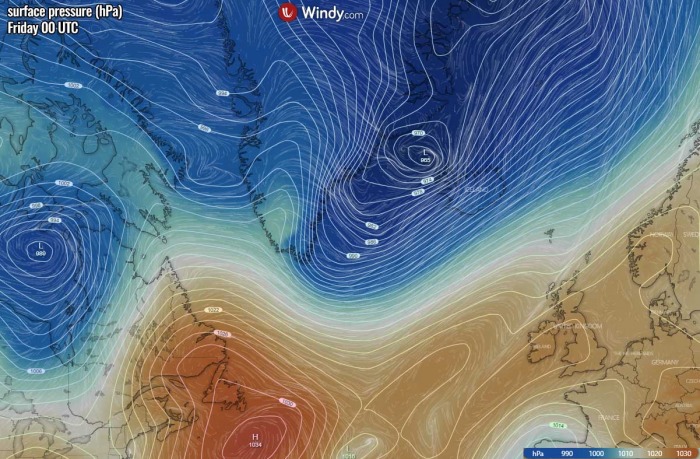 The upper ridge over Northwest Atlantic will also expand into the southern Labrador Sea in the wake of the deep trough and surface low.

SEVERE WINDSTORM AND MAJOR WAVES WILL SPREAD TOWARDS ICELAND

The tight pressure gradient around the low over the Labrador Sea will develop powerful, extremely severe winds on Wednesday. While the center of the low will be near the extreme southern tip of Greenland. Peak gusts will likely be above 150 km/h. 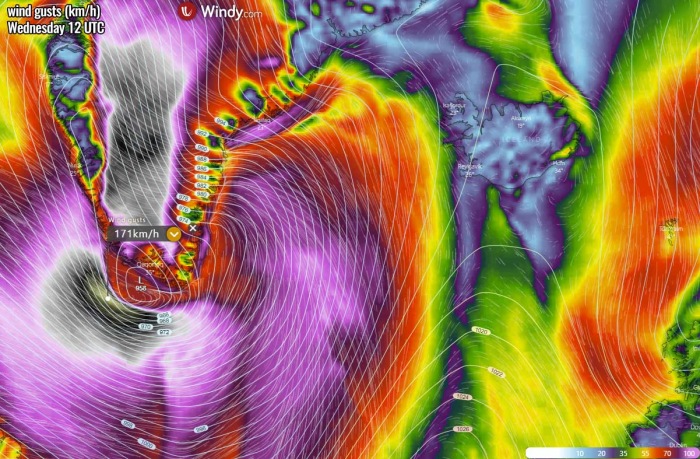 As the wind field will be intensifying and growing in size, high to major waves will also develop over the Labrador Sea on Wednesday. And will be growing much bigger with time as the low move further east-northeast. 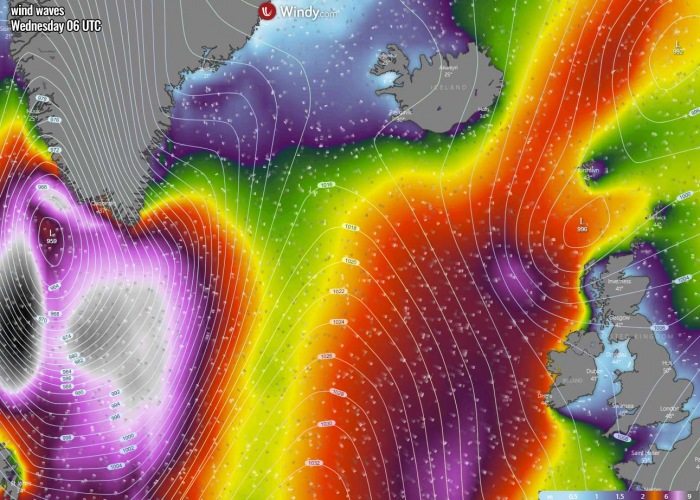 The most intense winds associated with the deep low will cross the southern tip of Greenland by Wednesday afternoon into the evening and night hours. Still remaining extremely severe, potentially peaking above 150 km/h.

Violent downslope winds will also develop along the southern mountains in the immediate west of the low’s center, as the pressure gradient will be very strong. 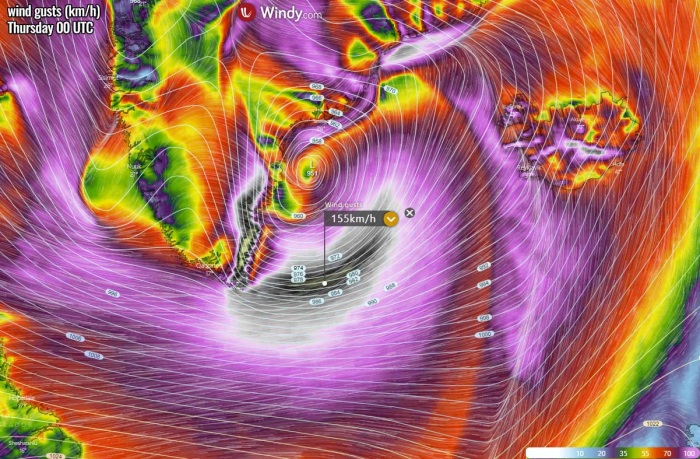 And so will be increasing the sea waves as well. Those could be higher than 12 meters (40 feet) near the southern tip of Greenland. Major waves will cover a broad area while continue spreading further east-northeast with the moving deep low along southeast Greenland. 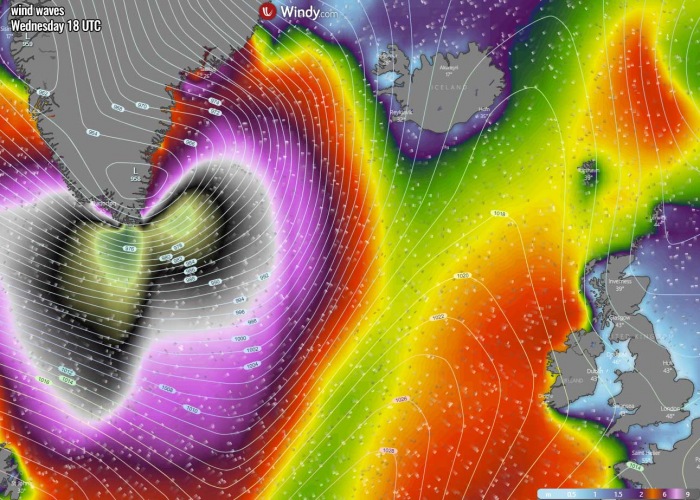 Although the surface low peaks on Wednesday evening/night, a tight pressure gradient along its southern part will remain extreme. Gusts should be 120-150 km/h through Thursday morning into early afternoon, gradually spreading towards Iceland now.

Winds will be diminishing over the southern Greeland as the pressure gradient weakens with a departing low. 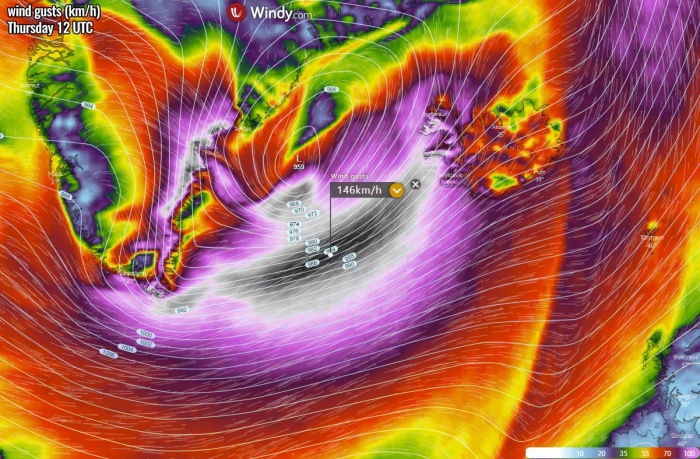 But the main concern with the position of the surface low and the extreme wind field is the dangerous sea waves. Models are in good agreement that massive waves with significant wave height (near 15 meters or 50 feet) will develop between southern Greenland and Iceland. 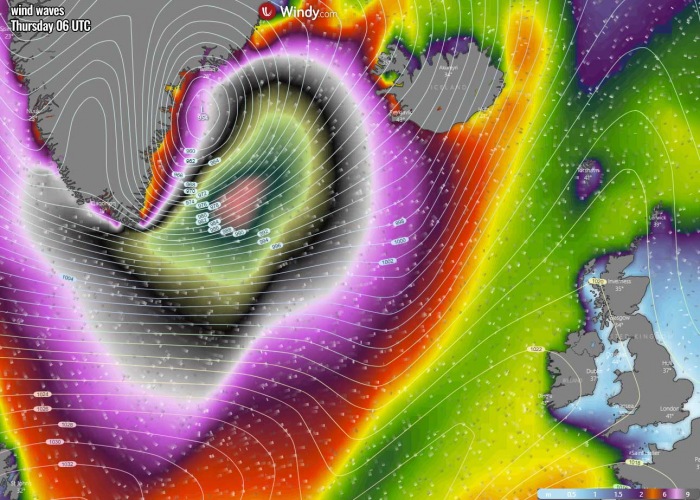 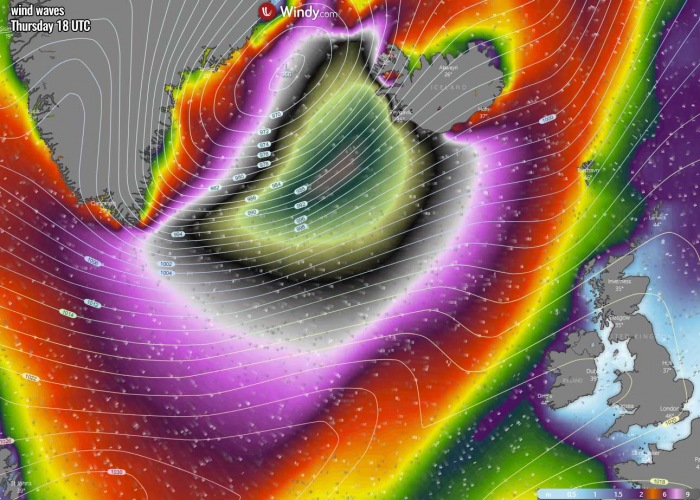 It is likely that significant wave height in excess of 12 meters will reach the coastal areas of western and southwestern Iceland by Thursday night. The Southern Peninsula and the Snæfellsnes Peninsula will be in the main zone of the highest winds and major waves as well.

Waves will gradually diminish into Friday morning as the low moves further northeast while weakening.

Driving conditions will also be significantly worsened by the ongoing frequent heavy snow showers from Thursday afternoon into Friday morning. Blizzard conditions with strongly reduced visibility are expected across most of the western half of Iceland. 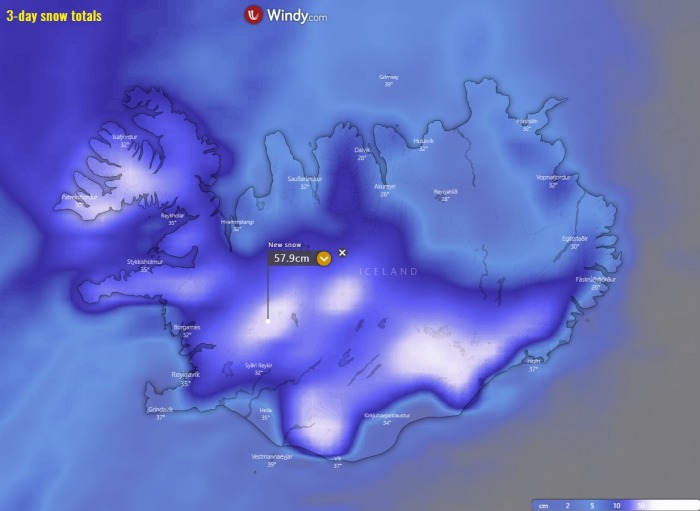