After a significant cold outbreak and record early snow in September, winter weather is spread across the Northern Plains this week. And to top this, another very powerful Arctic outbreak with extremely cold temperatures is forecast to spread across a large part of the Central Plains and Midwest over the next weekend through Tuesday next week.

Before the Arctic outbreak blasts from Canada, some winter and snowy weather with cold temperatures are forecast for the northern portions of the United States. Snow is expected to develop from Montana to Minnesota until Friday.

Through Wednesday into Wednesday night across Montana and Wyoming, and then further east through Thursday night over the Dakotas and northern Minnesota.

The northern Plains are on the edge of the large cold pool sitting over Canada, but the overall pattern does not move a lot, so the cold air mass is trapped over Montana, Dakotas, and towards the Great Lakes.

Travel disruptions are likely due to occasionally heavy snowfall.

But after this first wave of winter weather, a much more significant change is coming…

Once the short-wave over the northern United States vanished on Friday, a new deep trough emerges south from western Canada into the Northwest US. A very significant Arctic outbreak develops and pushes extremely cold temperatures into the United States. As far south as Texas!

Temperatures should locally push very low and combined with strong northerly winds, windchills will slip below 0 °F in places.

Video animation above is provided by www.wxcharts.com, www.pivotalweather.com and www.tropicaltidbits.com.

Snow is forecast to spread across the Central Plains as well. While a lot of snow is expected over Montana and the Dakotas.

The overall pattern developing over the North American continent will favor a textbook intrusion of extremely cold, Arctic air mass southward across western and central Canada into the United States.

The situation across Canada and the United States supporting this evolution develops over the weekend. A very strong upper-level ridge develops across the northern Pacific and Alaska. This is promoting a deep trough over the continent to the east of the ridge. Therefore cold air intrusion from north to south. 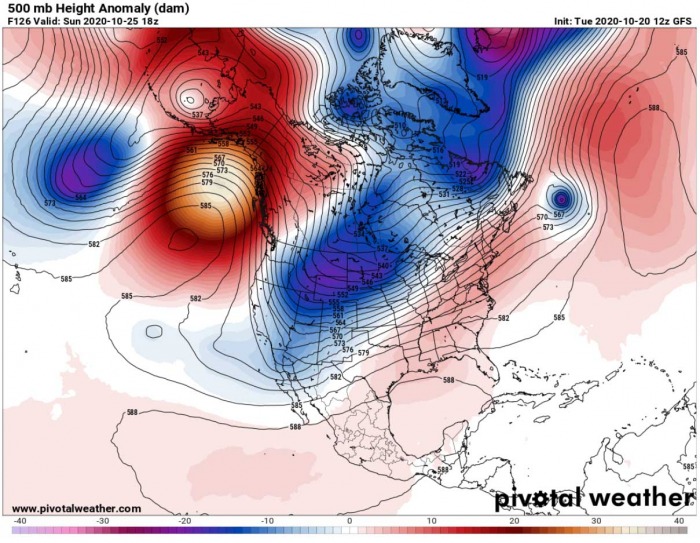 Notice also there is a small but deep closed low moving across the northwestern Atlantic – this is an extratropical low, the remnants of hurricane Epsilon approaching Bermuda this week.

As a result of a strong meridional flow across western Canada, a very significant cold air mass advection is forecast to spread towards the United States. By Sunday afternoon, the extremely cold temperatures will push into the Central Plains and into the Midwest. 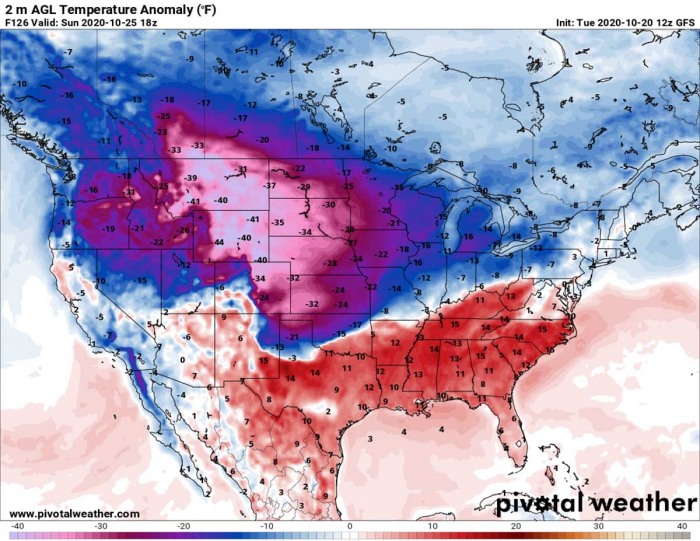 What will make this cold temperature even worse, will be the northerly winds. Wind chill* temperatures could reach mid-10s F over Kansas and Nebraska, but much lower across the northern High Plains. Higher terrain will indeed help, but 5-10 Fahrenheit below zero or even lower is fairly likely to occur on Sunday. 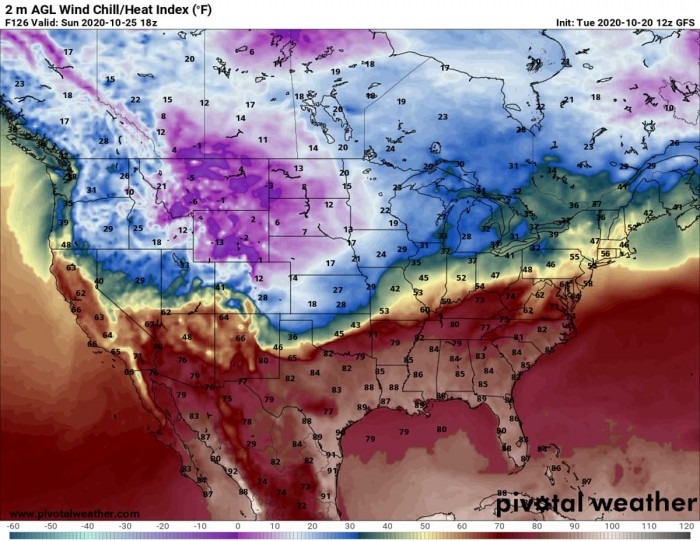 It will also be very chilly across the Midwest and the Northwest United States.

The most intense cold is expected over western Dakotas, Wyoming, and Montana. There, temperatures will be even more than 40 °F lower than usual for the end of October. This is extreme cold.

A significant cold advection extends into early next week. The pattern itself doesn’t change a lot, compared to Sunday, but the core of a deep trough strengthens over the northern United States. This establishes an additional cold blast progress further south across the Plains. 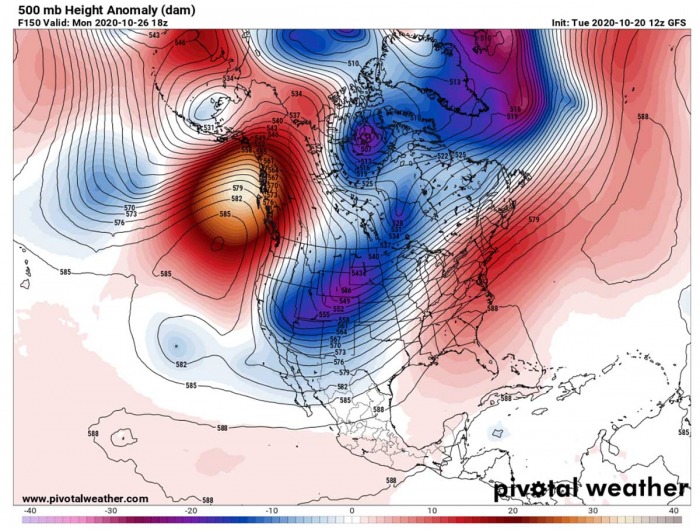 According to the GFS weather model, a surface cold front associated with the Arctic outbreak will continue surging deep south across Texas. Reaching the central parts by the late Monday morning or early afternoon hours.

The air mass behind the front will be significantly colder, potentially more than 40 °F below normal across the Panhandles and Colorado Plains where the core of the cold pool will be placed. 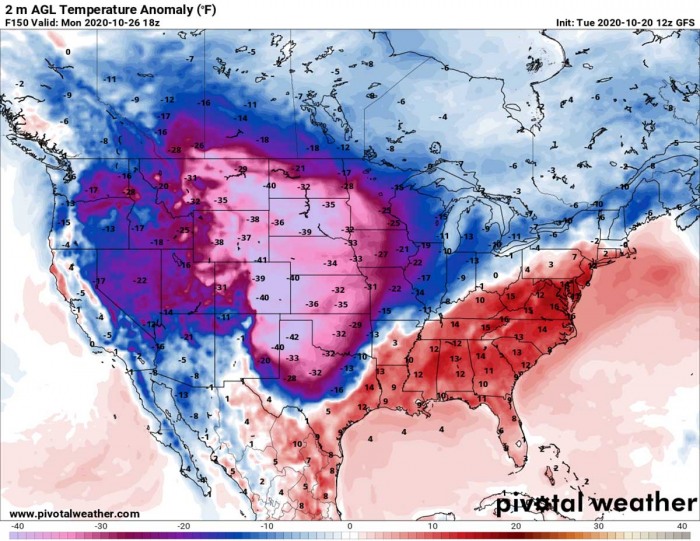 It will also remain extremely cold further north, across Nebraska, Wyoming, Montana, and South Dakota. Nearly 35 to 40 degrees Fahrenheit below average through all Monday.

And again, strong northerly winds will make things even worse. Windchill temperatures are expected to be well below zero across the High Plains and also Northern Plains. Close to 10 degrees below zero Fahrenheit in many areas. 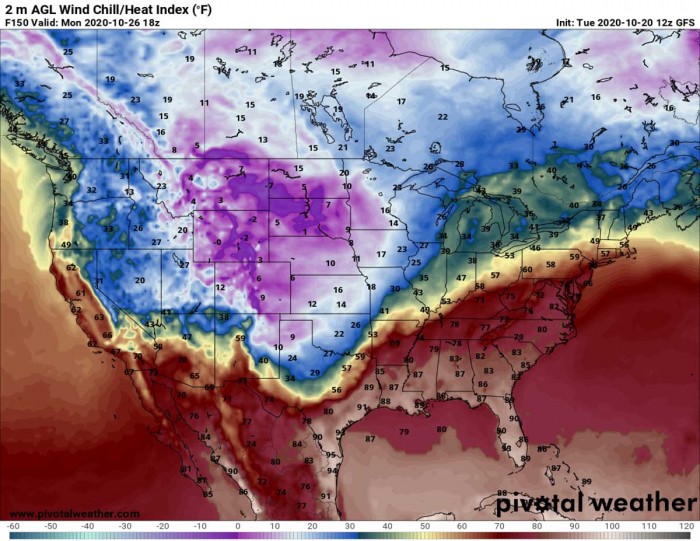 Cold wind chills are forecast to slip below zero degrees Fahrenheit all the way to southern Oklahoma and northern Texas by Monday afternoon. While deep south Texas will remain in hot summer temperatures in excess of 90 °F.

Breezy winds with the Arctic outbreak air mass advection will also bring much colder weather into the western United States. Near 20 °F below average with windchills near 15-20 °F are also forecast to spread across Nevada and Utah.

On Tuesday, the North Pacific ridge begins weakening while drifting into western Canada. In response to the change in pattern, an upper trough over the western United States moves further south. 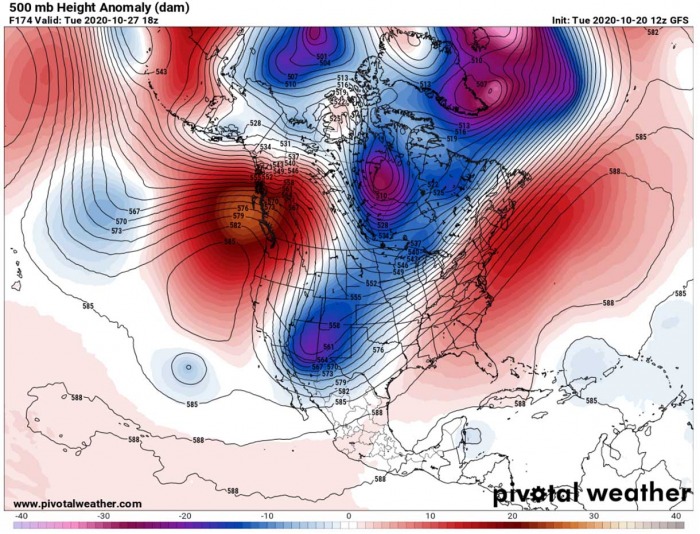 With the core of the cold outbreak moving further south, the most extreme temperatures will dig far south across the whole of Texas and the Mississipi valley as well. Reaching the western Gulf Coast by Tuesday.

Although temperatures will begin gradually improving from the north, it will remain very cold across the Plains.

The strongest cold is forecast to sit over New Mexico and Texas Panhandle on Tuesday. Temperatures as low as 45 °F below normal are forecast by the GFS model there.

This also means first frosty temperatures of the season are likely down to Texas.

Persistent northerly winds will help to maintain a very cold Tuesday. The lowest wind chill temperatures are forecast to be over Dakotas and Minessota, but southern and central Plains will not be far behind. 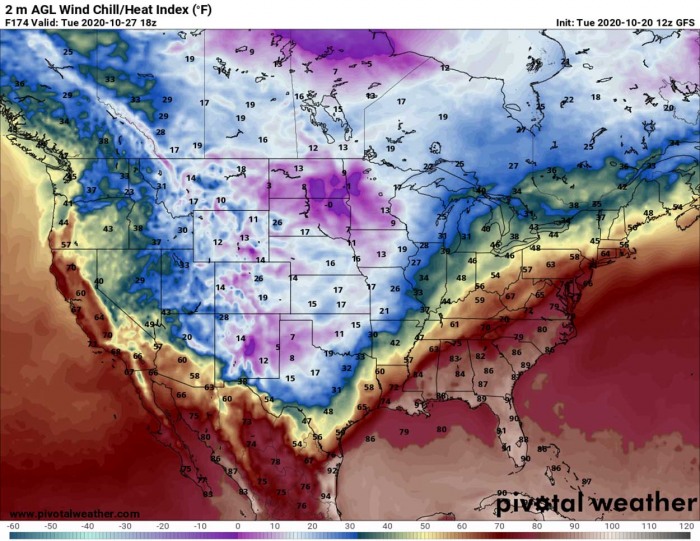 AIR MASS NEAR 50 °F BELOW AVERAGE

The most significant advection of extremely cold temperatures, however, is forecast for the northern High Plains. The ECMWF chart is showing this extremely cold air mass over Montana and western Dakotas on Monday. Near 50 °F below a long-term average for the end of October. 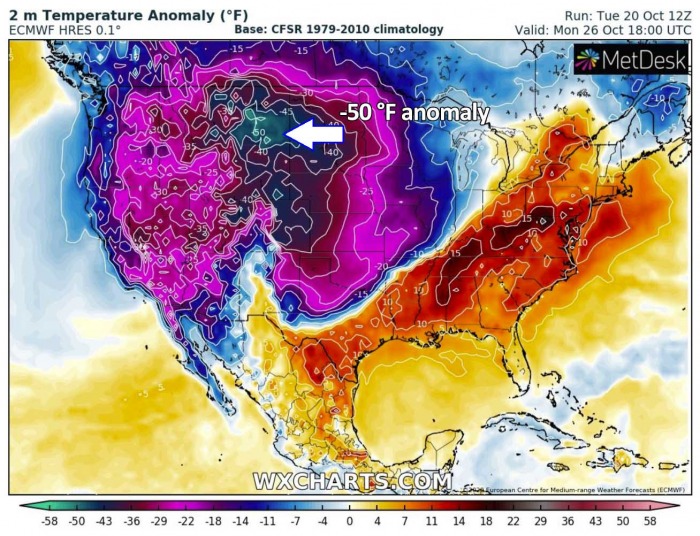 This means the daily temperatures will stay around -5 degrees Fahrenheit on Monday.

Temperatures across the Central Plains are expected to drop for nearly 35 °C (60 degrees F) between Thursday and Monday. As ahead of the coming Arctic trough, warm advection persists across Colorado and Kansas through Thursday and Friday. 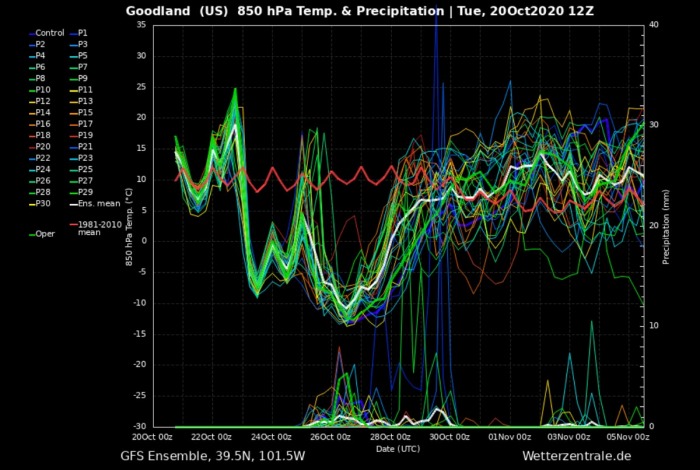 The attached GFS model Meteogram cross-section chart for Goodland (NW Kansas) above indicates a very obvious extreme temperature drop. From around 25 °C (77F) on Thursday to around -10 °C (14F) on Monday.

We can see how intense the cold pool with this Arctic outbreak is especially over the northern High Plains. This is an example of the cross-section forecast for Miles City (Montana). While the long-term average is around +6 °C at 850 mbar level, temperatures over the weekend and early next week will be much lower – around -13 °C (20 degrees Celsius lower than normal). 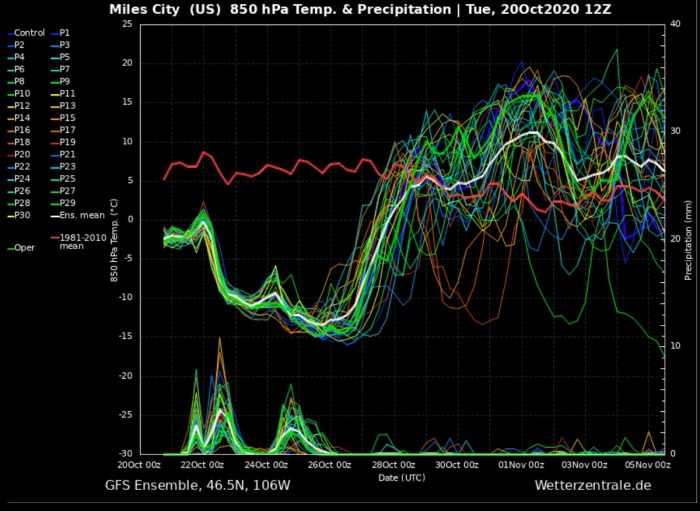 What is also impressive to see is very significant and quite rapid warming through mid-next week. As the pattern changes, temperatures return back to normal and the cold pool vanishes. Such change would introduce a rapid melting of the snow which will accumulate during the Arctic outbreak.

When the deep trough digs into the western United States, a surface low in the lee of the Rockies establishes a warm and moist advection across the Plains. This brings moisture to support snowfall along the leading Arctic front.

As the GFS model is forecasting, the very cold air mass could bring snow across parts of the Central Plains and Midwest as well.

On the contrary, here is the European ECMWF model forecast for the snow depth across the Contiguous United States by Tuesday evening. It certainly agrees with a huge amount of snow over the northern portions of the United States and also over the Rockies in Colorado. 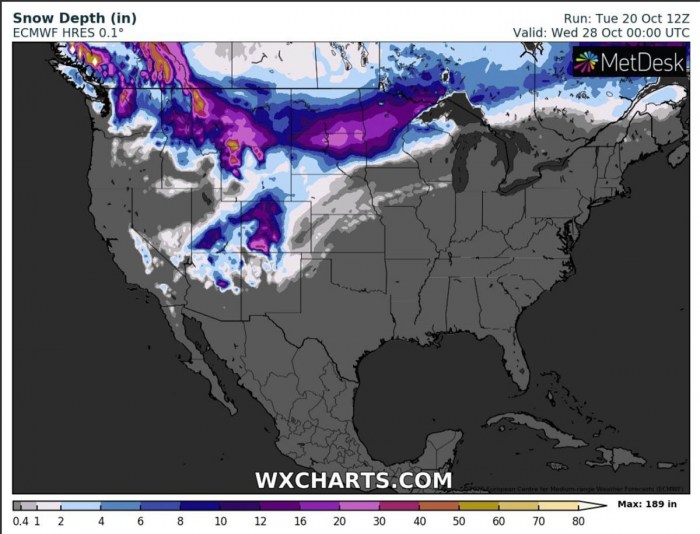 The most of snow is forecast across west-central Montana and across the Dakotas into Minessota and northern Wisconsin. Both models are in quite a good agreement the highest snow accumulation could exceed 15 inches (40 cm) or even higher locally. 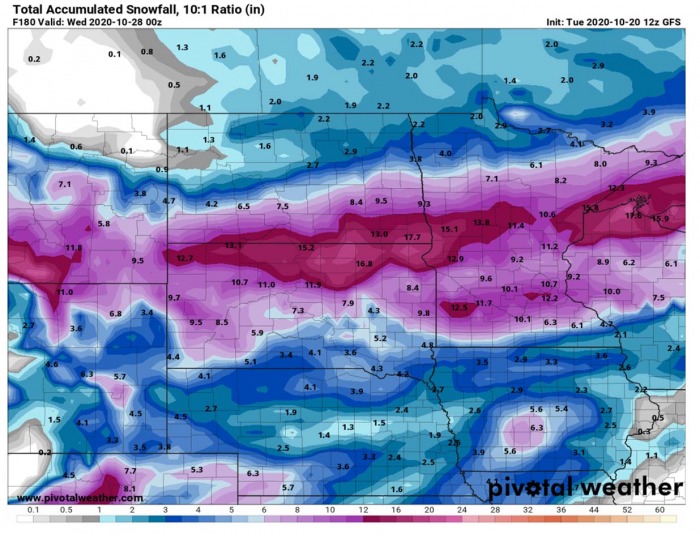 A huge amount of snow is expected in the higher terrain where the orographic effects will be maximized. Such particular areas are central Montana where 30-50 inches (1+ meter) of snow is quite likely to accumulate.

The cold advection forecast for the south should also bring snow across the eastern Colorado plains, Nebraska, most of Kansas, New Mexico, and across the Texas/Oklahoma Panhandle. Although not a particularly high amounts of snow, but a few inches could accumulate during the strongest cold advection on Monday and Tuesday. 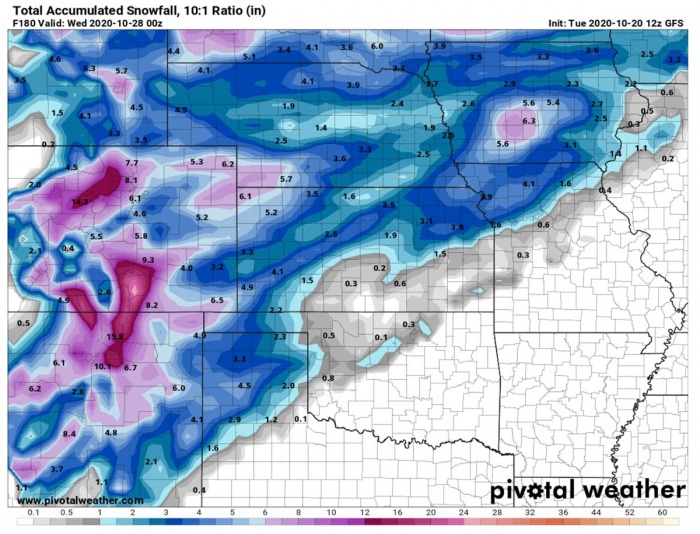 WHAT IS A COLD OR ARCTIC OUTBREAK?

Although there is no official definition set for an Arctic outbreak, this term is often used by forecasters for two reasons. One use refers to the potential record-setting or dangerous or extremely cold.

On the other hand, some forecasters use the term Arctic outbreak when a significantly colder air mass than average arrives/originates from the Arctic region.