Weather models are now on track with a frigid Arctic cold outbreak from Canada into the United States. Record cold temperatures are expected while snow will reach as far south as Texas. A damaging ice storm is possible across Oklahoma and Kansas on Tuesday.

Extreme cold is forecast to spread from the Northern Rockies into the High and Central Plains this weekend into early next week.

An early-season snowfall has already brought some snow records across the northern United States on Tuesday. A quite significant snowfall blasted across Montana, the Dakotas, and across Iowa and Minnesota.

Now, the weather pattern across Canada and the Contiguous United States will change dramatically in the coming day. An extremely cold Arctic outbreak is scheduled to enter this weekend and bring record-breaking cold temperatures for many states.

The weather will feel like it is January, not October. Temperatures are expected to be very low, nearly 40-50 degrees Fahrenheit below average!

If we remember the record-shattering Arctic outbreak in early September, this one will be even more powerful. The Arctic cold front will blast into Northern High Plains by Friday and intensify on Saturday.

Arctic air mass will continue further south across the United states, spreading into the Plains and reach Texas/Oklahoma Panhandle by Sunday. It will spread to deep south Texas on Monday.

It will be *frigid* cold across Colorado, Kansas, western Oklahoma, and West Texas early next week.

Extremely cold temperatures will also combine with a surface low on the lee side of the Rockies, pumping healthy moisture across the central United States northward. This will develop heavy snowfall and blizzard conditions along the surging cold front.

There is also a concerning potential for a damaging ice storm across the southern Plains on Tuesday.

The main airport in Twin Cities, Minnesota – St. Paul International airport has set a remarkable record, with 7.9 inches (20.1 cm) of snow on Tuesday morning. This is the earlier record Twin Cities have seen so much snow on Oct 20th and was 0.3 inches (0.8 cm) short of its highest October measurable snow amount (Oct 31st, 1991).

On average, the Twin Cities see their first measurable snowfall by early November.

Around 30.000 customers were left without power across Minnesota on Tuesday due to downed trees and power lines from heavy wet snow.

The attached 2-meter temperature anomaly forecast reveals the Arctic cold outbreak emerges into Northern Rockies on Sunday. Much colder temperatures than normal (even close to -40 °F or -28 °C) are forecast to spread across Montana and Wyoming. 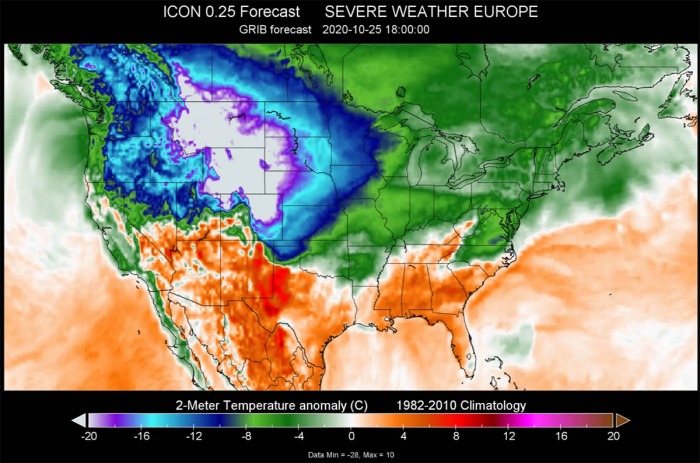 The cold front, associated with a developing Arctic outbreak, will be racing south quite fast through late Sunday and reach as far south as central Oklahoma and west Texas on Monday. 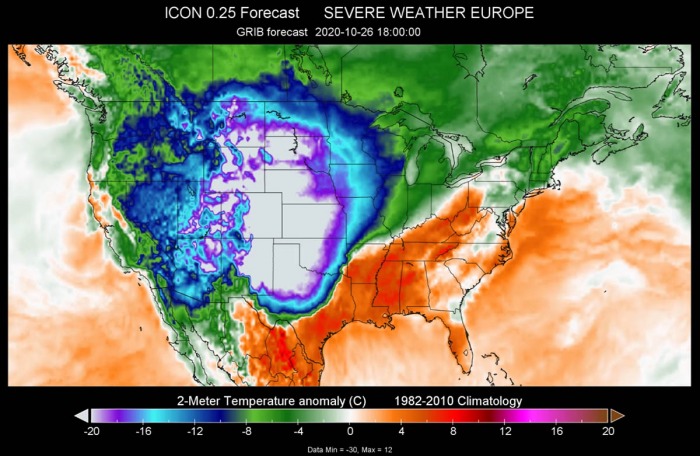 The Arctic air mass will maintain further north as well, although it will be a shy less frigid than on Sunday. The very cold air mass will also spread east across the Midwest on Monday, reaching eastern Nebraska and Kansas as well.

The morning temperatures will be extremely low.

Tuesday will bring much colder weather also across the southern Rockies and the Plains, as far south as southern United States including Arizona and New Mexico, southern Texas, and lower Mississippi valley. 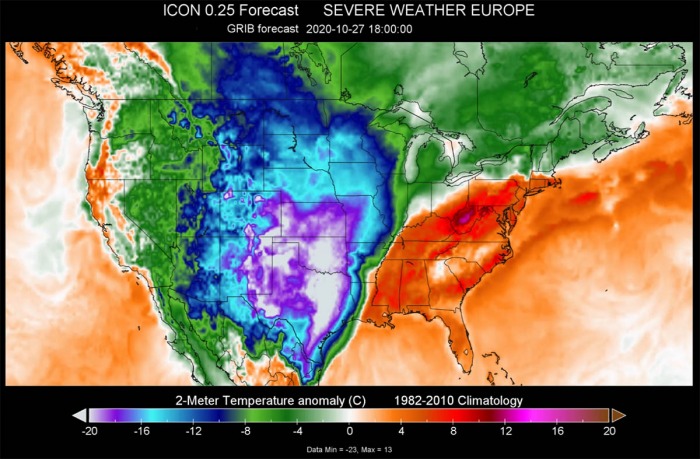 Temperatures across the region will be 35 to 40 °F (20 °C) lower than normal. The strongest anomaly over central Oklahoma, eastern Texas, and eastern New Mexico.

Through the mid-week, the record-setting cold pool loses its strength while spreading further east-southeast on Wednesday. Although weakening, it will still bring significantly colder weather also across the central United States. 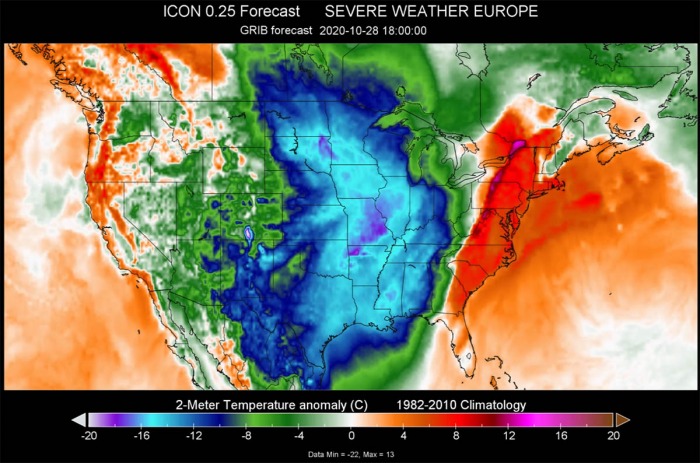 Wednesday will be around 15-20 °F (10-15 °C) colder than normal for the end of October across Missouri, Arkansas, Mississippi, Louisiana, and further east into the eastern United States. Cold weather will reach Tennessee and Alabama, also Illinois and Indiana.

The strongest cold across the Northern Rockies will be in the morning hours on Sunday. Extremely cold -10 to -20 °F (-30 °C) are forecast from northwest Wyoming into Montana and further north into Alberta (Canada). Around -5 to 5 °F is forecast across eastern Montana and the rest of Wyoming. 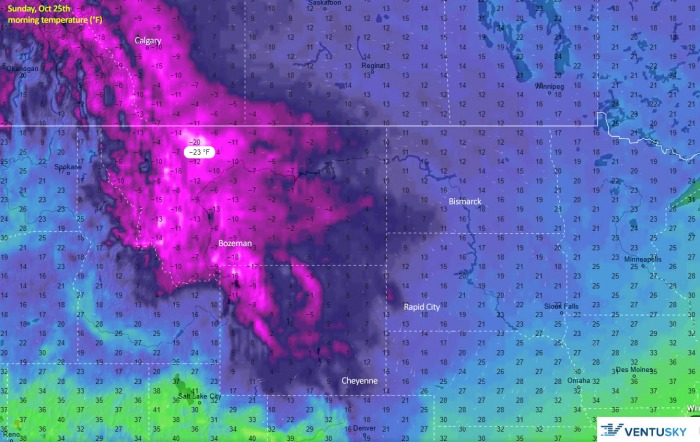 Below freezing temperatures will spread across the whole northern Plains as far south as northern Colorado, northwest Kansas, and northern Iowa.

In Montana, the city of Billings is forecast to reach its low-temperature around -2 °F (-18 °C) on Sunday, breaking its previous cold record for more than 20 degrees. Those records were set in late October 2002.

With the progress of the Arctic air mass behind the front on Monday, an extremely cold morning is likely across Wyoming and Colorado. Forecast lows could reach around -10 to -15 °F in some areas. 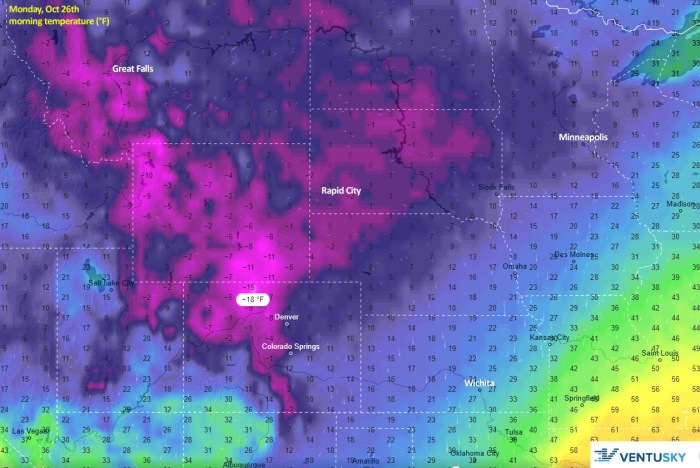 The city of Amarillo, Texas will have a remarkable change from Thursday’s upper 80s °F (near 30 °C) to chilly Friday with around 30 °F lower temperatures. But then even more intense cold arrives on Sunday into Monday.

Arctic outbreak will bring morning temperatures into the upper 10s Fahrenheit (-10 °C). That is more than 50 degrees Fahrenheit temperature drop in less than three days!

Again, a very cold morning with lows around -10 °F is forecast for Montana. Around 0 °F or slightly below across Dakotas as well.

The Arctic front slows down by late Monday, while a large cold pool spreads behind it. This brings also a very cold Tuesday morning, around -10 °F is forecast across northern Colorado. 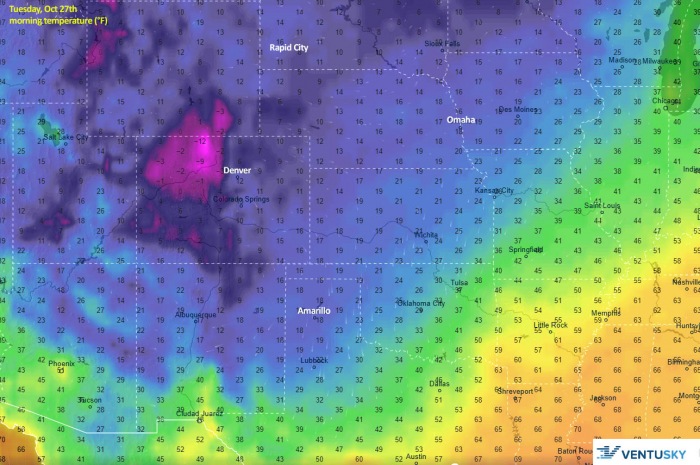 Low to mid-10s Fahrenheit is likely across Nebraska, western Kansas, and Colorado plains, also across northeast New Mexico and central Utah. A cold morning with a low in the upper 10s is likely across Texas Panhandle, as well as Iowa.

The final day of this significant Arctic outbreak seems to be expected on Wednesday. Then, the cold pool finally vanishes and temperatures will become warmer. However, Wednesday morning will still be very cold across New Mexico, the Panhlandles, Kansas, and northern Missouri. Mid 10s °F is likely. 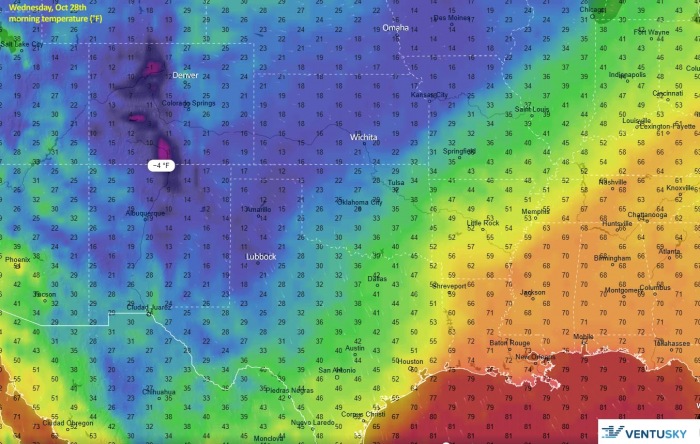 Even colder temperatures are expected in the Rockies across Colorado, below zero Fahrenheit. Freezing morning temperatures are possible as far south as west-central Texas, southern Oklahoma, and central Missouri.

Kansas City, Missouri forecast lows are expected to be around 15 °F (-9 °C) on Wednesday morning.

It will also be significantly cooler across the whole of Texas, the cold will be reaching the Gulf coast. Houston is forecast to reach a very cold morning, possibly as low as upper 30s °F (3 °C) as well.

As the weak surface low forms in the Lee of the Rockies over southeast Colorado, low-level moisture will be advecting north across the Plains. This will be prime for heavy snowfall especially across the Northern Rockies and the northern Plains.

A swath of high snowfall accumulation is expected from eastern Montana across Dakotas into Minnesota. Much more snow will accumulate across the higher terrain in central Montana and northern Wyoming. 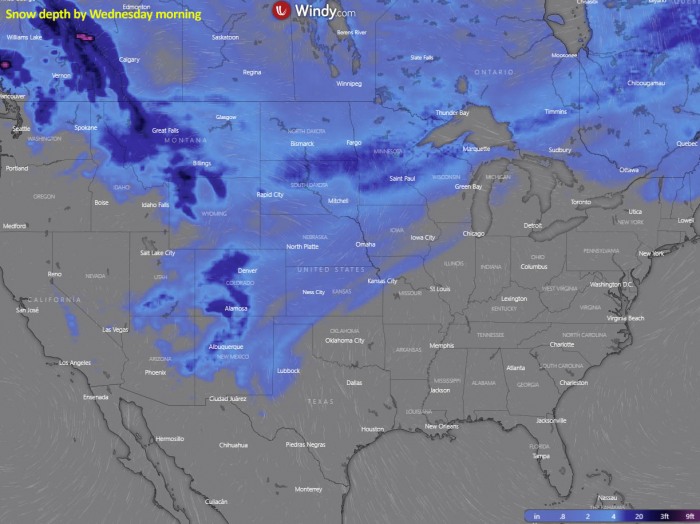 The graphics are provided by Windy.com

Additional snow amount coming with this winter storm will also set a new record for October’s total snow accumulation especially in Minnesota. The city of Minneapolis past record is ‘only’ 8.2 inches, recorded in 1991.

As of Oct 22nd, around 8 inches (20 cm) of snow has already fallen this month. Therefore, a new record amount of October’s snow aacumulation is just a matter of time.

Some other areas are also in the game to set their October snow accumulation records higher.

The Arctic air mass’ strong northeasterly flow will introduce a very intense orographic snowfall along the east-northeast facing mountain slopes/ridges in central Montana and northwestern Wyoming (Yellowstone). 20 to more than 30 inches (50-80 cm) is expected from late Friday to Monday there. 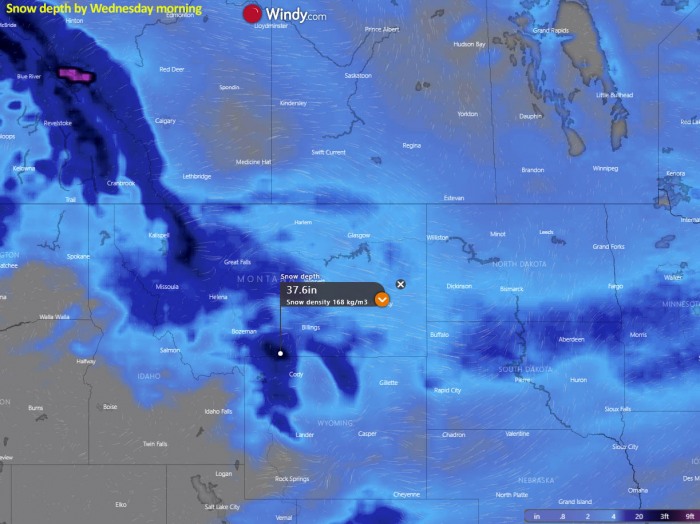 This is actually quite typical for the Northern Rockies during a similar Arctic outbreak events in the past. Heavy winter precipitation is resulting in the persistent northeasterly flow into the high mountains.

With the progress of the Arctic front across the High and Central Plains, snowfall will be occurring along the leading edge of cold air surging south on Monday. Some snow should spread across Nebraska, Kansas, Iowa, and northern Missouri.

Much more snow will accumulate over the central Rockies in Colorado, 10-20 inches (25-50 cm), or even more is locally possible, as strong orographic effects will develop. Some snow will also cover eastern Colorado. 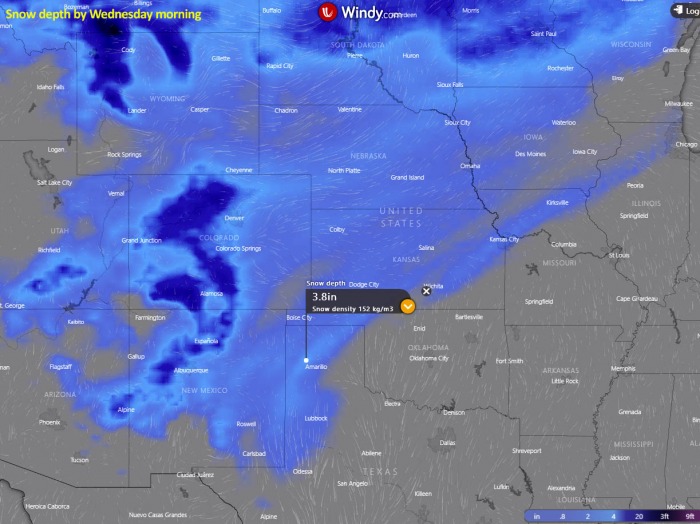 A couple inches of snow could be possible across Texas Panhandle and West Texas, including Oklahoma Panhandle. More snow is likely to accumulate further west in New Mexico, as the northeasterly winds advect moisture and result in orographic snowfall into the southern Rockies there.

Around 4 inches (10 cm) of snow accumulation is possible in Amarillo.

The earliest snow in Amarillo occurred on Oct 8th exactly 50 years ago, in the year 1970.

Besides the frigid cold days in many states, record-cold mornings, and heavy snowfall in the coming days, another dangerous event is an increasing concern lately.

What some models are forecasting, is the high potential for freezing rain in the narrow corridor across the southern Plains.

A damaging ice storm could occur along the leading Arctic front across northwest Texas, central Oklahoma into southeast Kansas and northern Missouri on Tuesday morning. Followed by some snow when temperatures finally mix to support snowflakes. 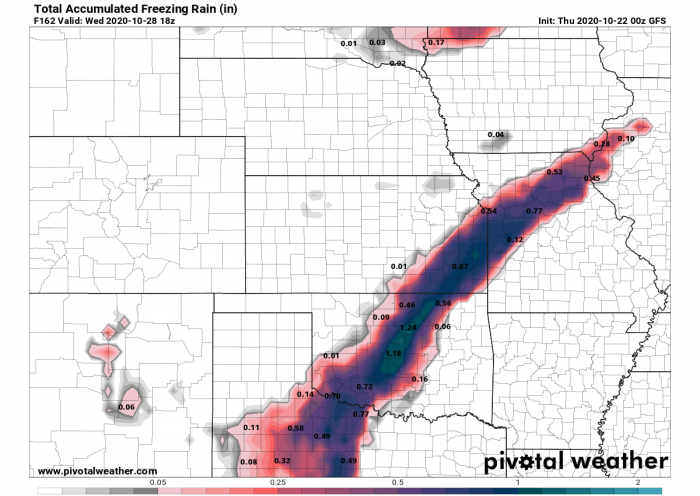 The GFS model is, for example, hinting at a very concerning amount of ice accumulation, especially across northwest Texas, central Oklahoma, and southeast Kansas.

Over an inch to inch and a half (nearly 3 cm) of ice would undoubtedly be devastating for the trees, as most of them still have leaves.

Attached below is the Skew-T (vertical cross-section sounding) diagram for central Oklahoma on Tuesday morning. What we can see marked with Fig.1 and Fig.2, is the textbook appearance for freezing rain formation: 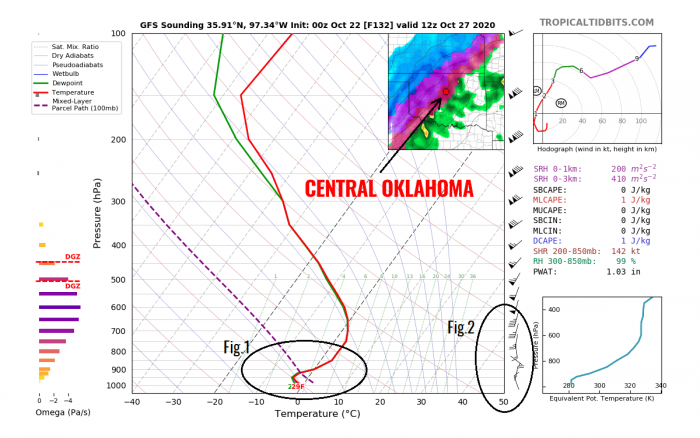 The diagram indicates that a thermal inversion could develop along the Arctic front. This means that the temperature is warmer with increasing height. Therefore, the lowest parts are experiencing freezing temperatures while it is much warmer aloft.

As an Arctic cold air mass is denser than the warmer air mass, the lowest levels are cooling a bit faster than higher levels. Especially if strong southerly winds are present ahead of the front, so the cold advection in the mid-level parts of the atmosphere is lagged behind the surface front.

As (heavy) precipitation is likely to come with cold frontal lift, the forecast scenario could bring damaging ice storm. Until the mid-level temperatures are above zero, it will be raining into the freezing temperature near the surface.

This is certainly a concern and has to be closely monitored further. Heavyweight resulting from thick ice layers would also bring hundreds of trees and powerlines down.