The first days of Fall 2020 will bring a very intense and unusually strong cold outbreak across North America. Very cold weather with nearly 65 degrees F temperature drop in 48 hours is forecast early next week! The first frost and snowfall of this fall are expected across the High Plains from Montana to Colorado.

A significant weather pattern changes are coming for the North American continent next week. The event seems like a solid winter outbreak, as a very cold airmass will blast from Canada into the United States early next week.

The cold weather arrives just days after a very got weekend across the Northern and Central Plains.

Coming up this weekend, an upper ridge delivers a record-breaking heat for the western US. And also very hot weather for the Central Plains.

The general west-northwest across the western CONUS results in dry weather, therefore resulting in significant heating across the Central and High Plains. 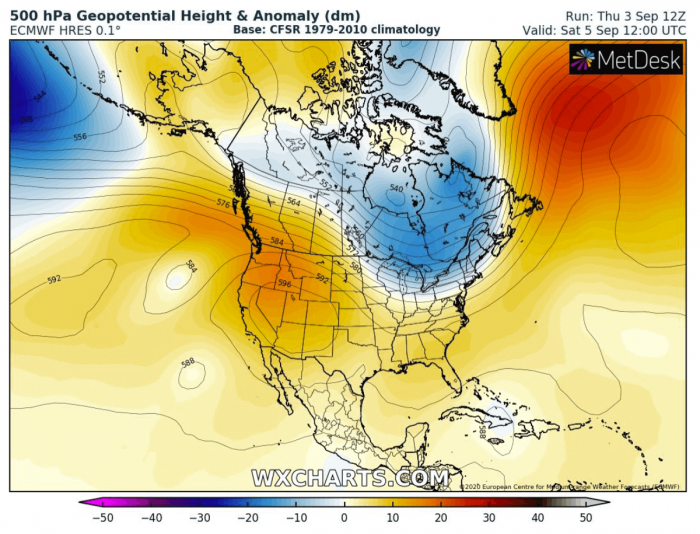 A strongly positive temperature anomaly develops over the western half of CONUS, while the colder weather sits to its east around the Great Lakes and southeast Canada.

Much above-average temperatures across the northwest US should bring very hot early fall day. The heat will be the most extreme across the southwest US, with peak values near 120F (48 °C). 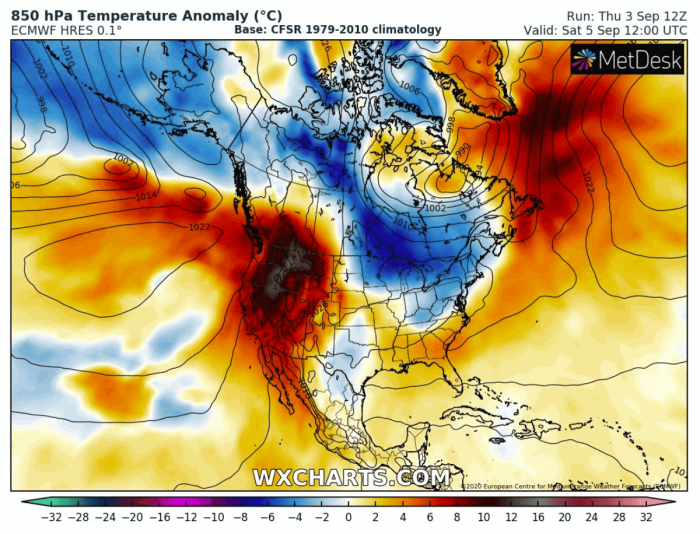 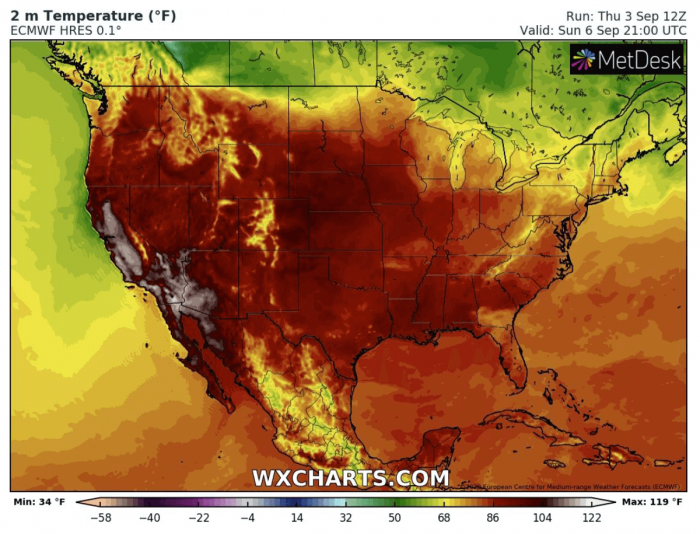 Stable and dry weather will bring very hot days across the Northern Plains on both weekend days, Saturday and Sunday. Temperatures should easily exceed 100F (38 °C) in many areas, probably even 105F (40 °C) mark in some places. 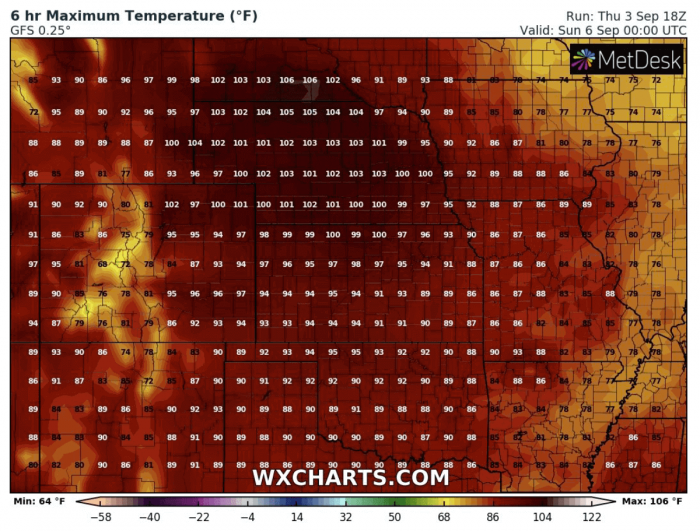 For early September, this is not unusual, but it is certainly a quite rare to experience so high temperatures. Especially over northern Nebraska and southern South Dakota. Near 100F will also be possible across eastern Wyoming.

Let’s get into some more details:

On Monday, a cold pool associated with this outbreak is spreading from Canada into the northern US. The density of the colder air mass and strong northerly winds behind the cold front will support a quite fast-moving cold blast, spreading towards the south.

Meanwhile, warm to hot weather remains over the western and southern US, also across the eastern CONUS. 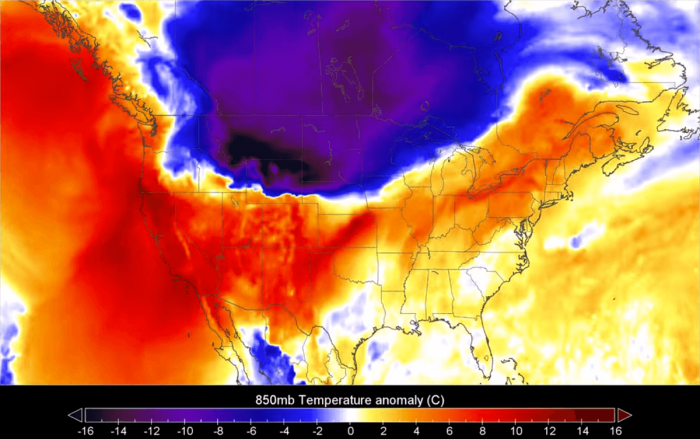 While Tuesday brings a much, much colder air mass deep far south across the Plains. Temperatures at the 850 mbar level will be even close to 20 °C lower than normal for early September.

The coldest air mass will spread across Central and High Plains, reaching the Texas Panhandle and Oklahoma as well. 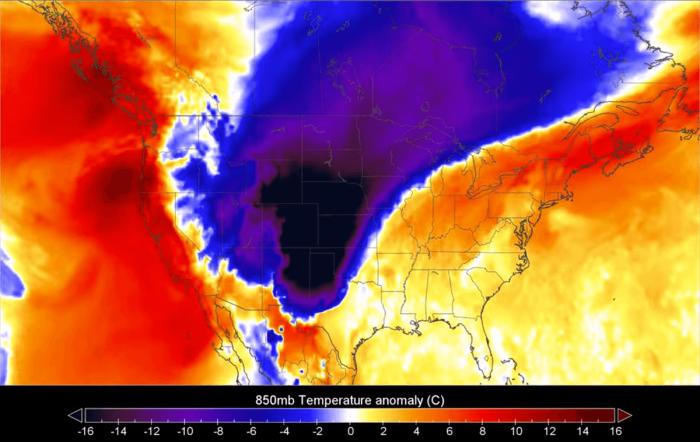 The cold outbreak has no reason to stop its progress towards the south, and it is forecast to reach northern Mexico and the Gulf on Wednesday. The coldest air mass spreads into Texas and Oklahoma.

Again strengthening the upper ridge from the northeast Pacific into the western CONUS, should return warmer weather into the northwestern parts. 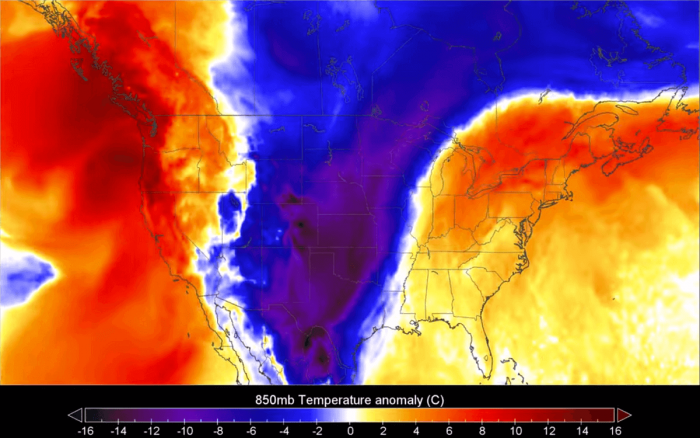 A cold air mass is forecast to gradually spread further east-southeast after Wednesday. However, the cold pool will begin weakening and losing its strength on Thursday and Friday when reaching the Mississippi valley and towards the southeast.

Extreme temperature change across the Plains

The temperature drop will be very significant to the locally extreme. Especially for the High Plains across Wyoming, western Nebraska, western Kansas, and Colorado.

On Monday, the models are forecasting a very hot day will again be expected over eastern Colorado Plains into Kansas. Locally, temperatures will reach up to 105 degrees F (around 40 °C). 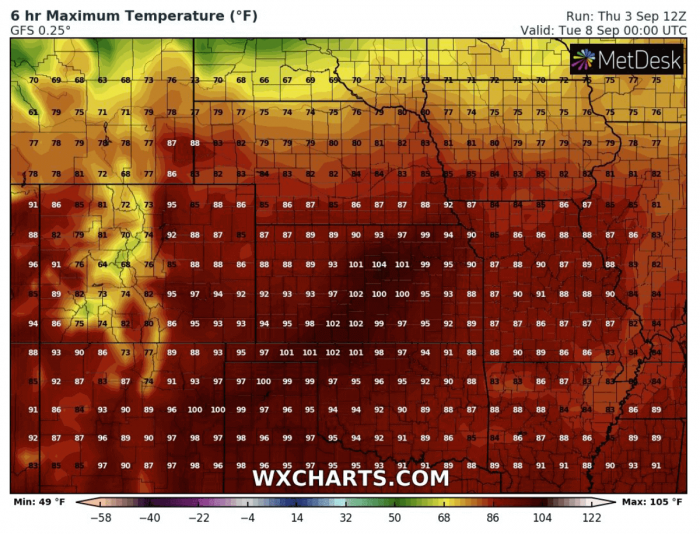 A strong cold front will be moving south overnight to Tuesday. Bringing much colder temperatures in its wake. So Tuesday morning could already bring the first frost of the Fall 2020 season. Precisely across Wyoming, Colorado, and western Nebraska.

Significantly cold temperatures are also forecast to spread over western Kansas and the rest of Nebraska state. 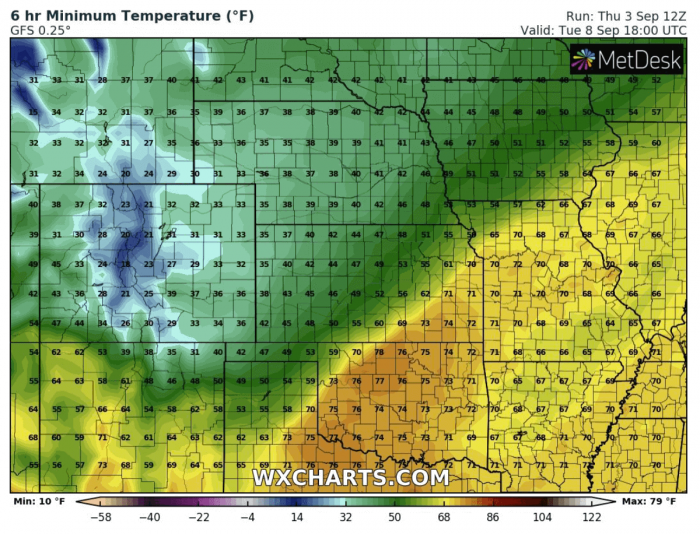 The outbreak delivers the most significant cold weather through late Tuesday into Wednesday. The morning will bring a damaging frost for Wyoming, Colorado, and northern New Mexico.

Temperatures could drop to near 20-25 °F (-3 to -6 °C) across the Colorado foothills. Some frost potential seems also across western Kansas and western Nebraska. 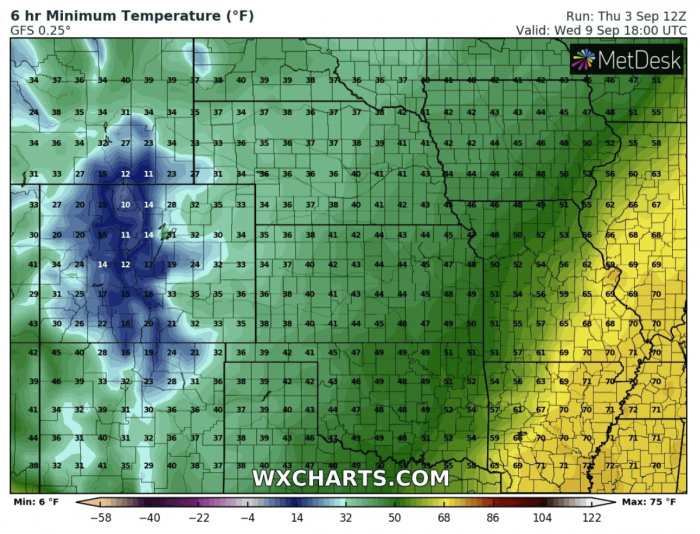 The 850 temperature change over the weekend into next week around North Platte (Nebraska) will be exceptional. The area will experience an extreme temperature drop from around 32 °C (90F) at 850 mbar level to nearly 0 °C (32F). That is around 32 degrees C (~ 60 °F) in roughly 36 hours. 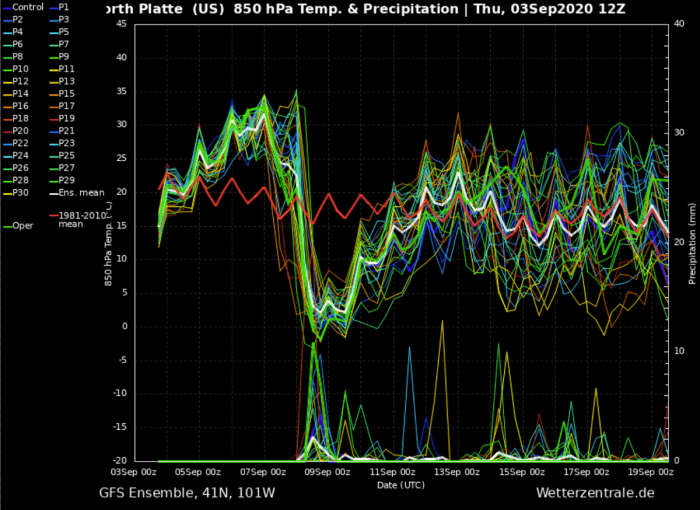 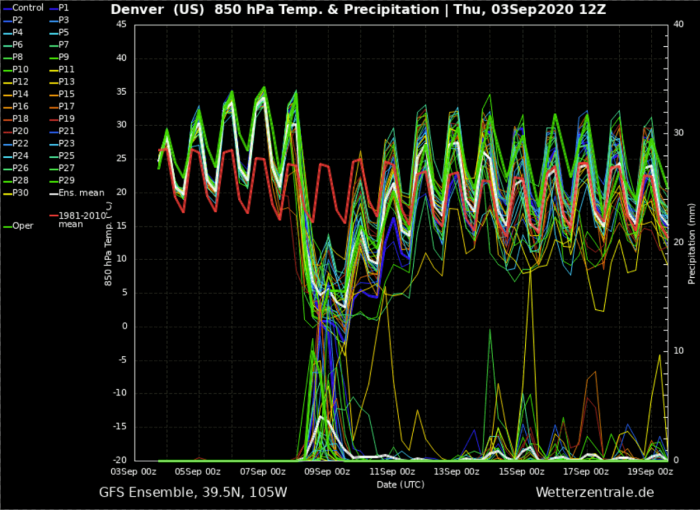 First snow of the Fall season

The event will also deliver some fresh snow with a notable accumulation across the High Plains of the northern Rockies. But snowfall (and ground accumulation) is also possible across parts of central Montana, Wyoming, western Nebraska, eastern Colorado plains, and northern New Mexico. 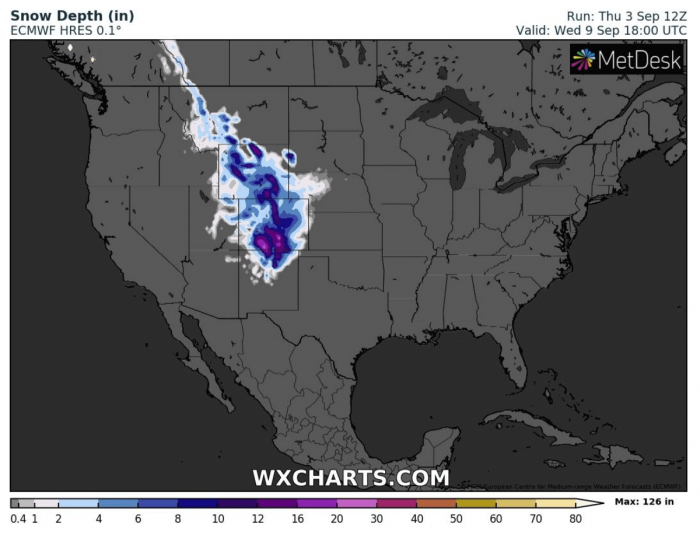 RECAP: Looks like the Fall season 2020 will soon introduce a very significant temperature change, as an intense cold outbreak spreads from Canada into the United States. The first morning frosts will be possible, as well as some fresh snow over the High Plains.