A Medicane or a cyclone with tropical characteristics is a severe weather event that forms in the Mediterranean Sea. This weekend, strongly anomalous Black Sea waters will lead to a formation of a similar event – an intense Tropical-Like Cyclone (TLC). It could impact the northern coast of the Black Sea and coastal northern Turkey with an extreme amount of rain, leading to a significant flooding threat and worsen the ongoing situation in the region.

Medicane, the Mediterranean Tropical-Like Cyclone (TLC). These are the words you will notice in the headlines sometimes. But what are they and how often do they form? Mediterranean tropical-like cyclones might be impressive to see from satellite/radar imagery but are dangerous severe weather events.

While they usually form in the Mediterranean Sea, they can also develop in the Black Sea. This will be the case over the coming weekend and the potential is increasing that we will be dealing with an intense and pretty rare August tropical-like cyclone event. 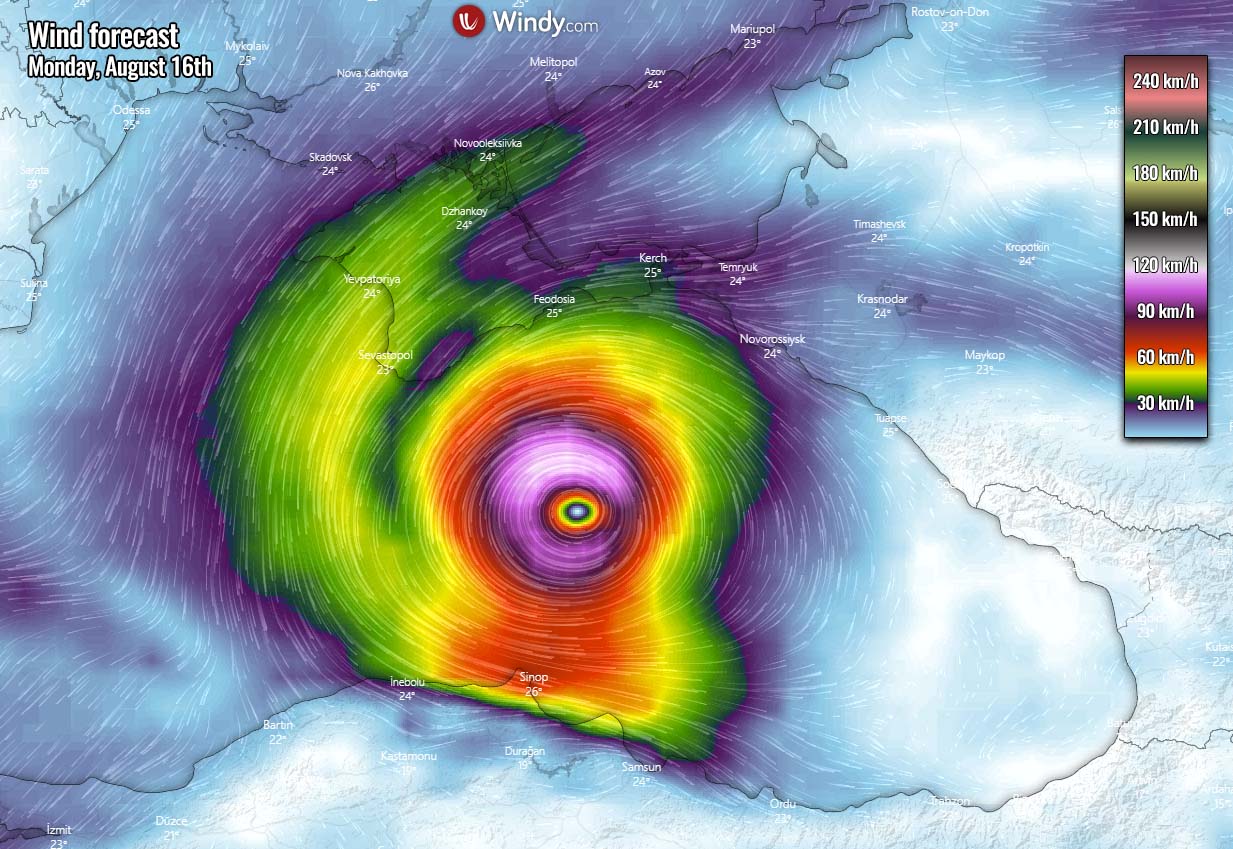 The impact of severe damaging winds and destructive flooding could be significant for both the northern and southern coast of the Black Sea. Worsening the ongoing flooding situation in northern Turkey.

Here is the WRF model solution throughout the development of the TLC. The animation includes a forecast for 10 m winds, 850, 700, and 500 mbar temperature, instability, and radar reflectivity. Forecast was kindly produced by our partners Meteo Balkans.

You can see how all three levels, 500, 700, and 850 mbar charts, clearly resemble the warm-core system with temperatures being the highest near the traveling core of the system.

WHAT IS A TROPICAL-LIKE CYCLONE (TLC) OR A MEDICANE?

Tropical-like storms or cyclones in the Mediterranean region, also known by their popular name medicane, are cyclones that attain subtropical or even tropical characteristics. They form in the Mediterranean Sea and can produce violent convective storms with severe winds and torrential rainfall impacts. 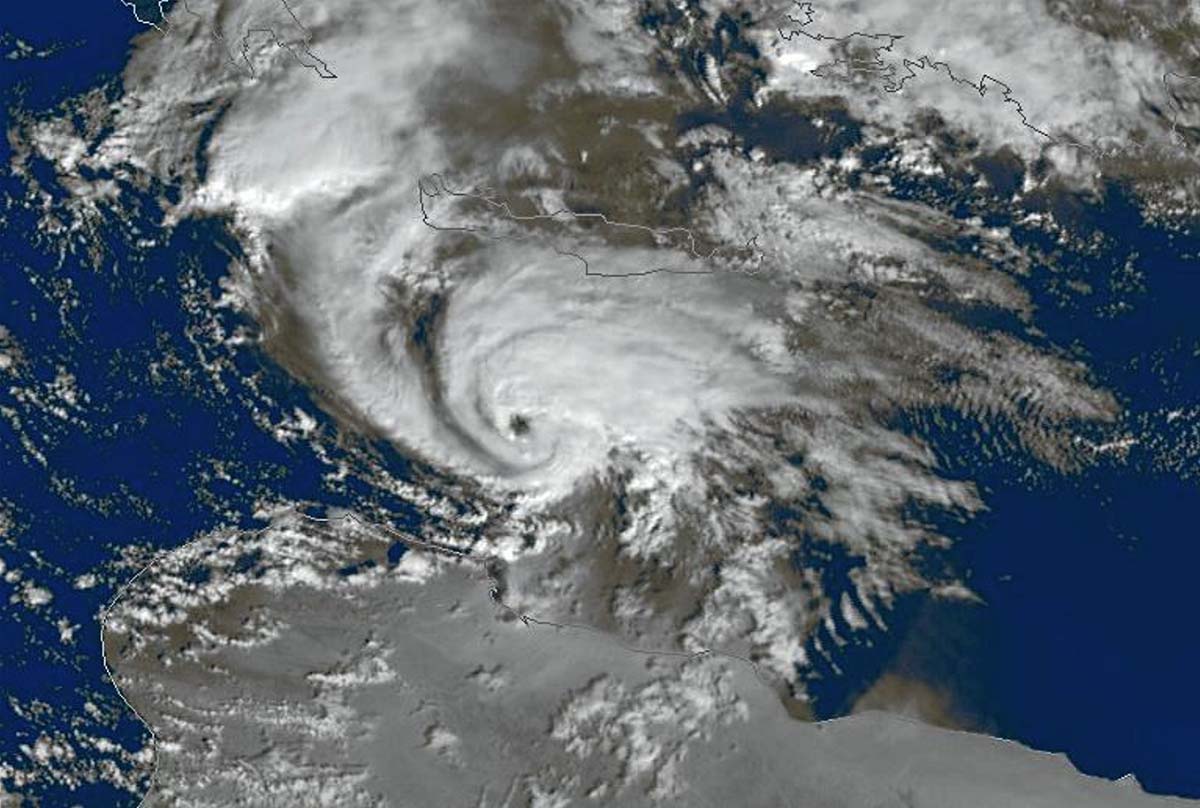 Tropical-Like Cyclone systems typically reach gale to storm force strength, however, the strongest have even reached hurricane strength. Thus they pose a very significant severe wind threat to the impacted regions they form. As they also result in torrential rainfall, they produce major floods in affected areas along the coast.

Tropical-like cyclones / medicanes are an annual occurrence, appearing on average 1-2 times each year. TLC can form throughout the year but are by far most likely to form between September and January.

Unlike tropical cyclones in the Atlantic or Pacific Ocean, the tropical-like cyclone can form with sea surface temperatures below 26 °C.

WHY AND HOW A TROPICAL-LIKE CYCLONE FORMS

Similar to the tropical cyclones, low wind shear is required by tropical-like cyclones to form in the Mediterranean Sea. There are two preferred areas of occurrence that have been statistically found in the recent decades – the Ionian sea and in the western portions of the Mediterranean Sea around the Balearic Islands.

While also the Black Sea could produce or fuel intense convective storms that begin cyclonic rotation, and that appears to be similar to tropical-like cyclones (TLC) observed in the Mediterranean – medicanes. Over the last 20 years, two of these storms reached tropical storm and subtropical storm intensity. One TLC in August 2002 and another one in September 2005. 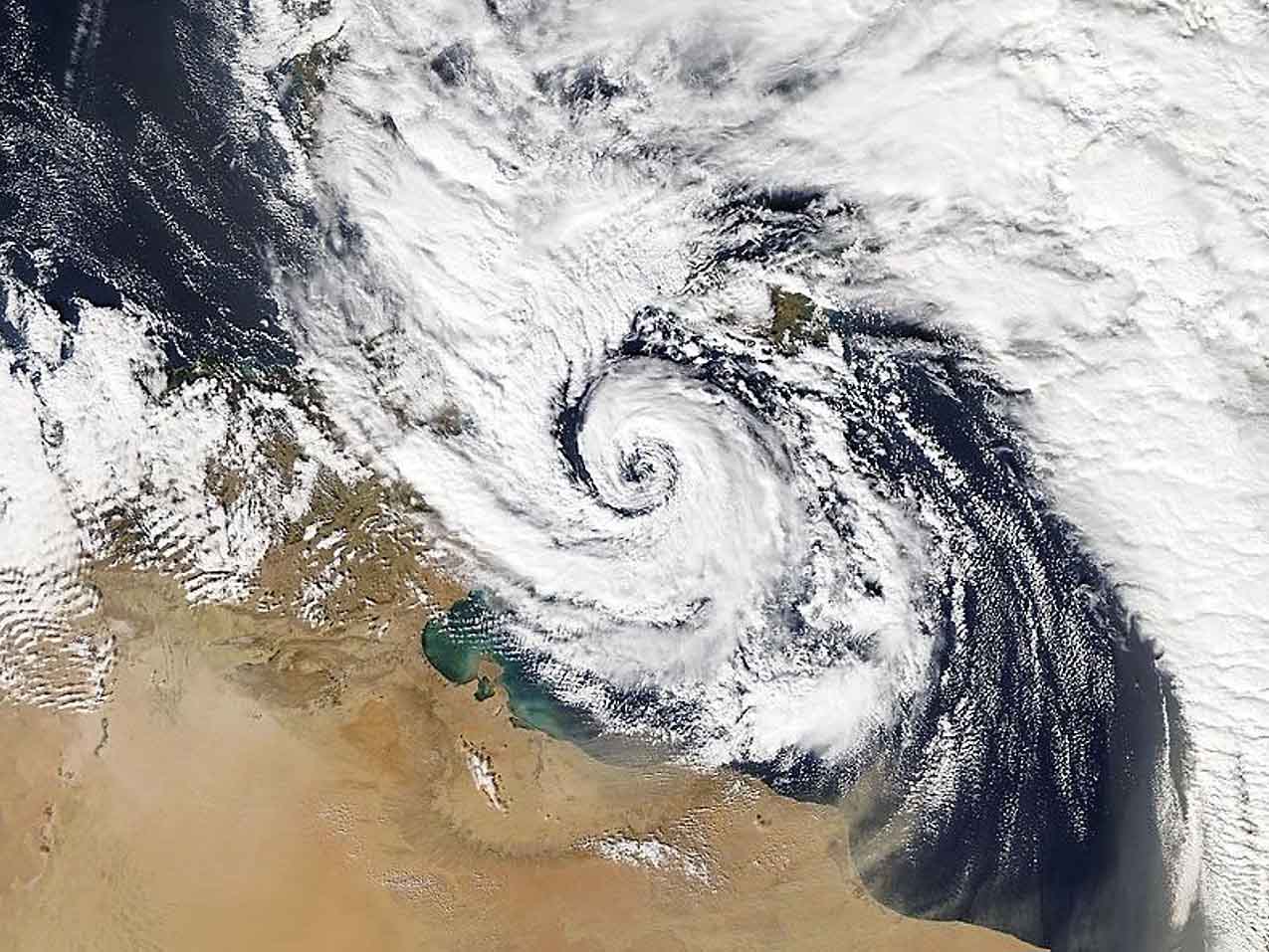 The strength and size of tropical-like cyclones are constrained by the enclosed environment of the Mediterranean sea, where the largest medicanes can reach a size of about 300 km and may approach or even reach hurricane intensity.

Mediterranean or Black Sea tropical-like cyclone events typically persist between 12 hours and 5 days and undergo three phases in their lifetime:

While the first and second phase happens over the sea, the most dangerous phase is the third one. There are a number of medicane events when the cyclones made a devastating landfall in Greece, Italy, Malta, Algeria, and Tunisia. Such examples are Zorba and Ianos recently. 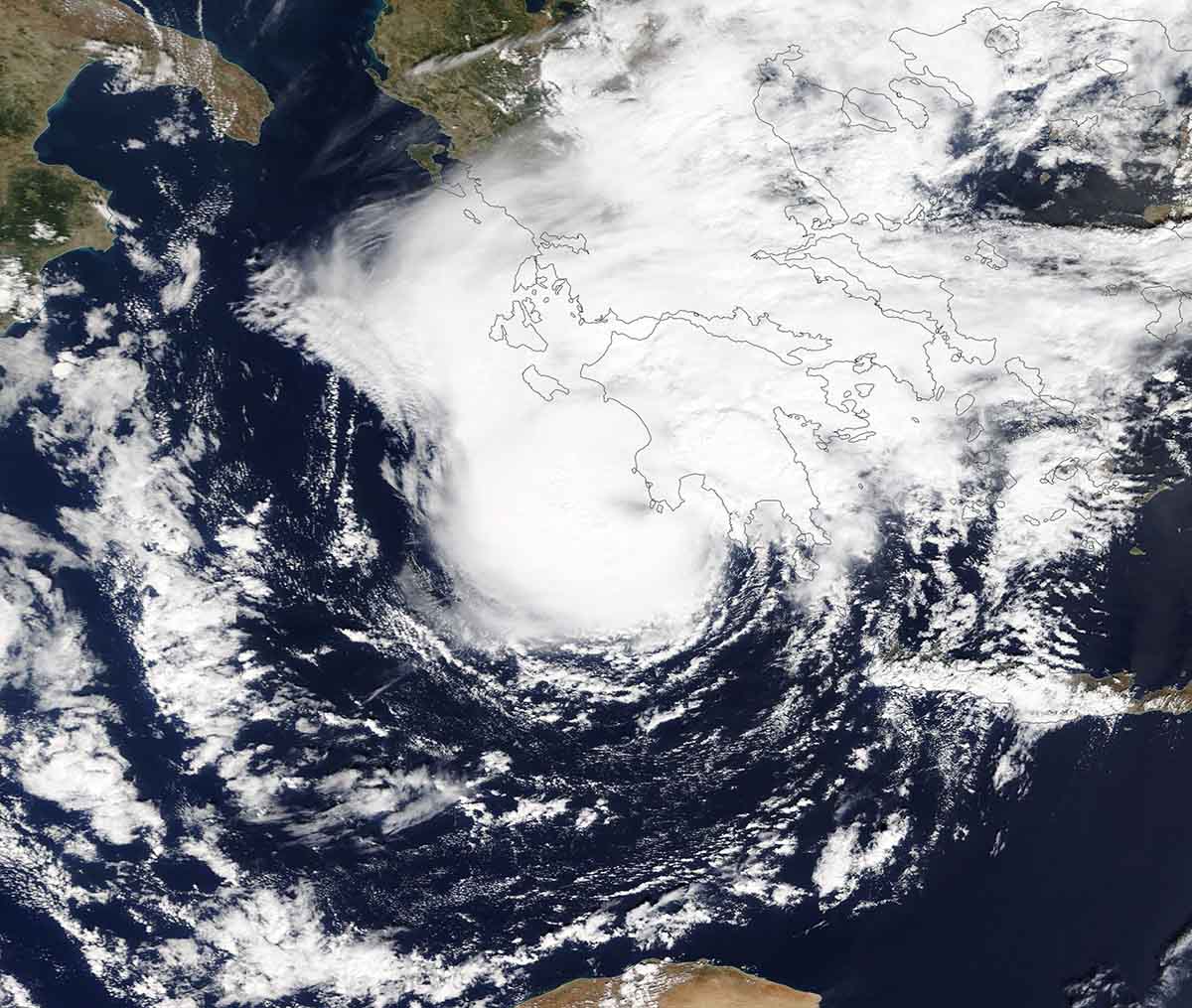 Medicanes are considered potentially dangerous due to dense population of coastal regions in the Mediterranean. The peak attainable strength of medicanes is estimated to be equivalent to a Category 1 hurricane on the Saffir-Simpson scale.

SOME OF THE STRONGEST TROPICAL-LIKE CYCLONE / MEDICANES SO FAR

While many tropical-like cyclones do not become significant systems and reach coastal areas, some do. In September 1969, a medicane over the south-central Mediterranean produced a major flooding event and left 600 people dead and 250.000 homeless in Algeria and Tunisia.

Another intense medicane happened in January 1995, known as Celeno, and developed peak wind gusts of 135 km/h.

The October 1996 medicane Cornelia formed in the Tyrrhenian sea, producing 90 km/h winds as far as 100 km from the center and made significant wind/rain damage in the Aeolian Islands. 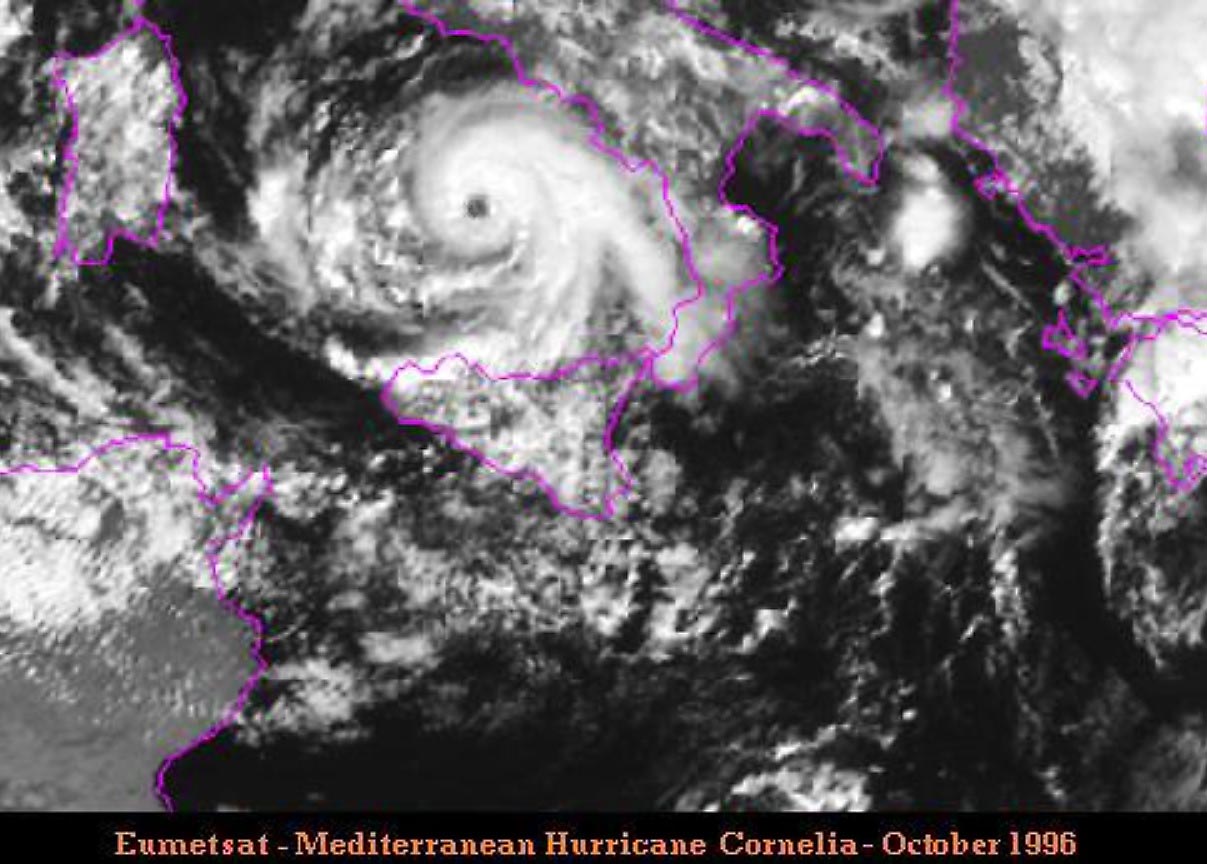 Medicane Quedresa on November 7th, 2014 made a direct hit to Malta. At the time it was well-developed with a distinct eye. Its 10-minute sustained winds reached 111 km/h and peak gusts 154 km/h. The minimum central pressure was 978 mbar.

Just recently, there were a few strong medicanes. One of them was a medicane Numa in 2017. Numa produced a hurricane-like satellite structure, including some upper-level outflow cirrus shield visible. 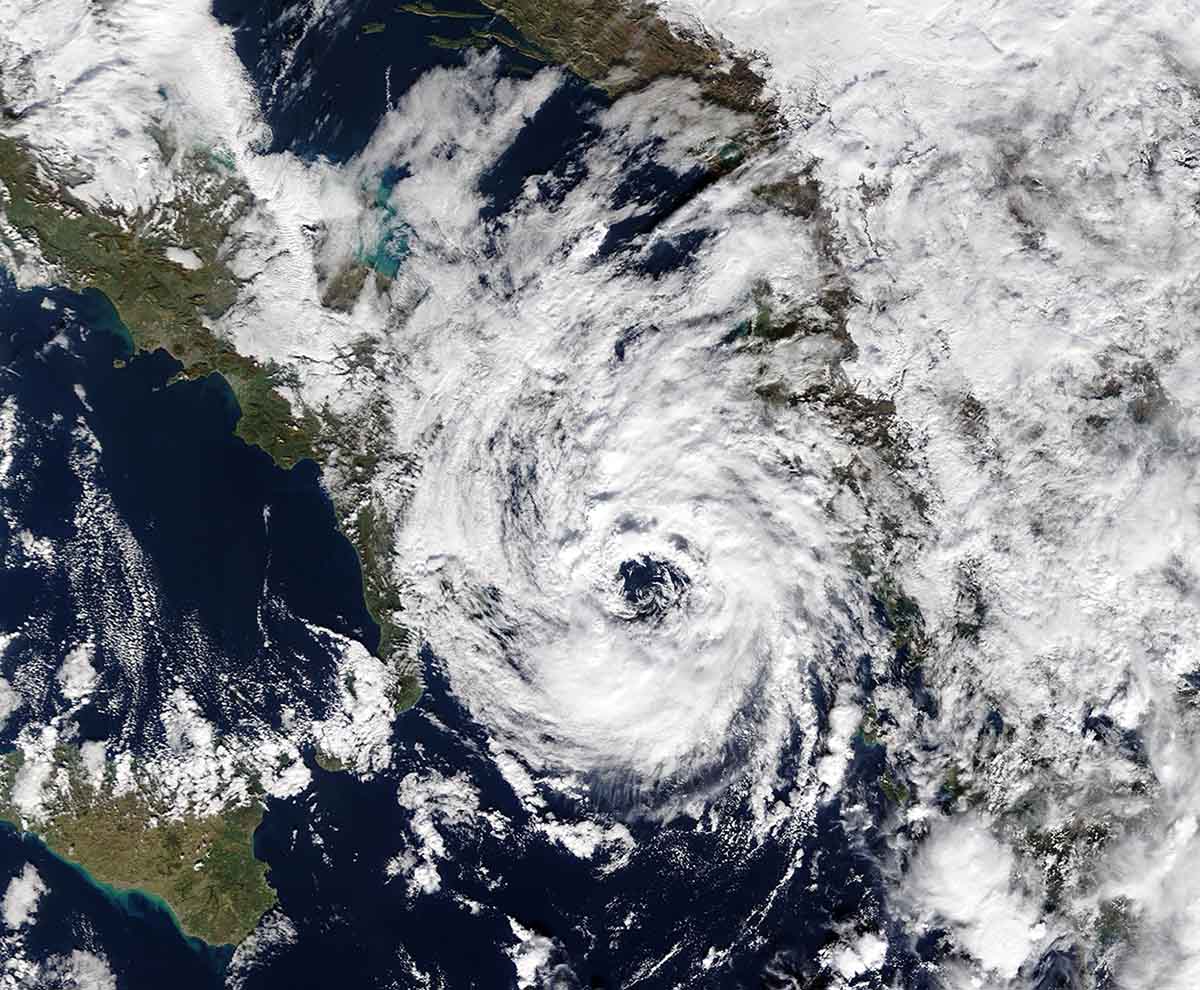 A severe medicane Zorba hit southwest Greece in September 2018, producing winds over 100 km/h, major waves and up to 1.5 m storm surge along the western Greece.

An intense Medicane Ianos that formed on September 16th last year was the first event of the 2020/21 Mediterranean medicane season. 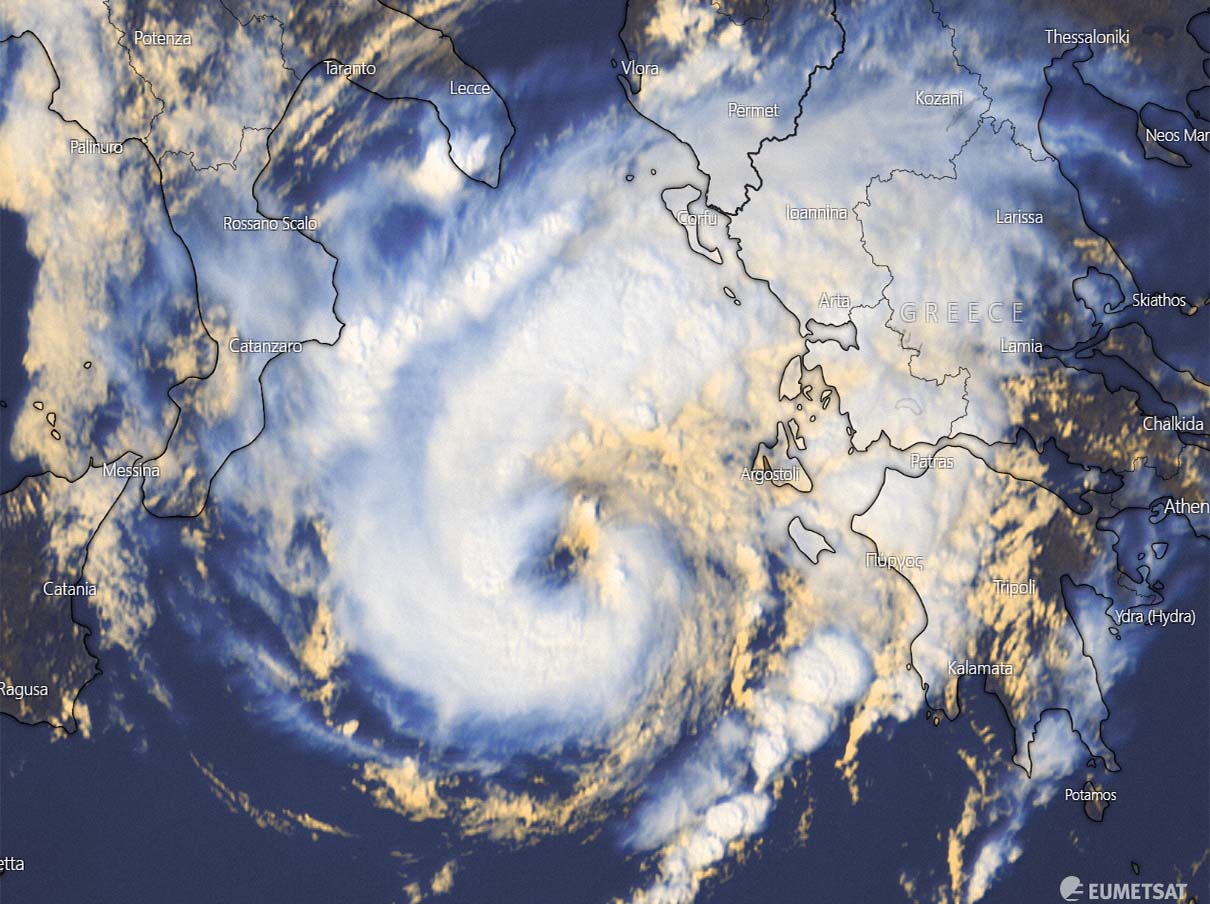 Ianos made a severe impact with fooding and damaging winds to western Greece.

TROPICAL-LIKE CYCLONES IN THE BLACK SEA

On a number of occasions, tropical-like cyclones similar to the medicanes in the Mediterranean region have also formed in the Black Sea. There are three most notable TLC events: one happening on March 21st, 2002, another one between August 7-11th, 2002, and the third one between September 25–29th, 2005.

The September 25-29th, 2005 event is particularly well-documented and investigated. So far, no known TLC formations in the Black Sea have attained hurricane strength. 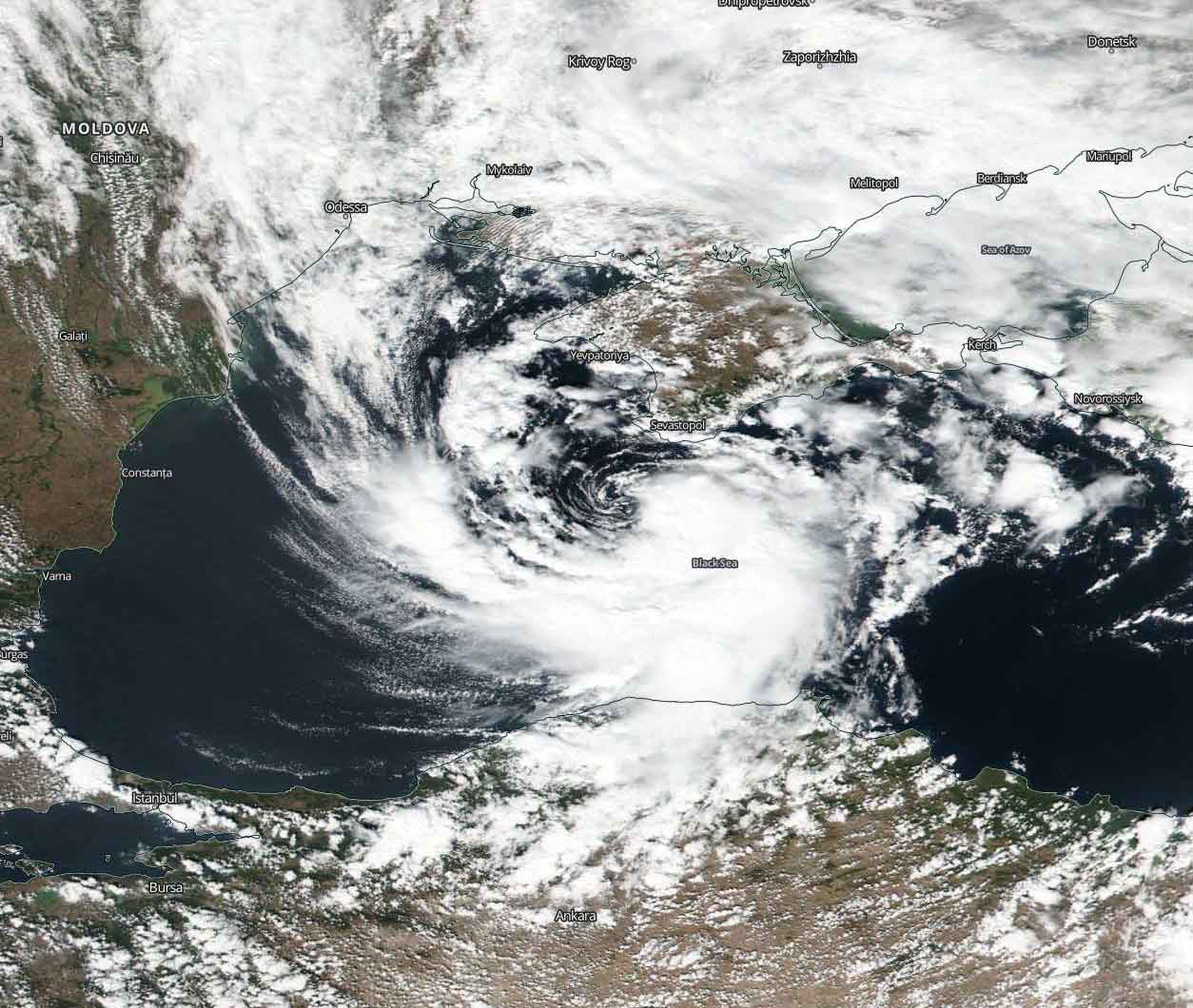 Another event occured on early September 2018 (satellite image above).

EXTREMELY ABOVE NORMAL WATERS OF THE BLACK SEA THIS SUMMER

As we discussed earlier, similar to the tropical cyclone, also the TLC formations in the Mediterranean or the Black Sea regions require very warm water temperatures. While normally a tropical-like cyclone would form even below the official threshold of 26 °C, this is not even a question this summer.

The observed surface water temperatures across the Black Sea through this month are *extremely* warm, almost hot in the far eastern portions. Basically, the whole Black Sea has a very warm water temperature, from 25 to 27 °C in the western parts and up to nearly 30 °C in the eastern side. 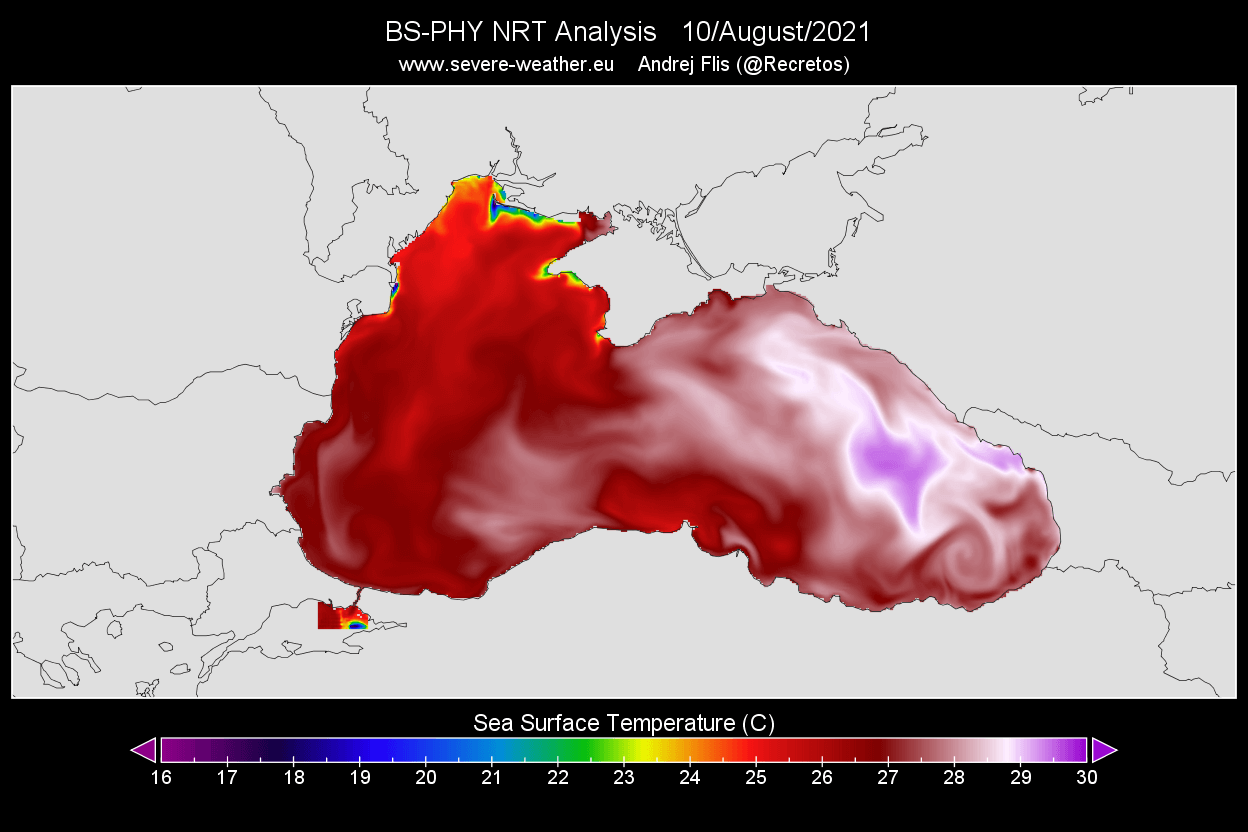 The extremely warm sea waters in the eastern portions of the Black Sea are now in focus, as an upper low has formed aloft and is expected to develop a tropical-like cyclone in this part of the Black Sea. The weather pattern in the recent weeks was mostly stable in the region, allowing intense heatwaves that were gradually warming the water.

Attached below is the sea-surface water temperature anomaly analysis from earlier this week, indicating that there is basically no part of the Black Sea having normal or below normal water temperature.

Extremely anomalous waters are present, especially in the eastern parts of the Black Sea where we are expecting a TLC to develop this weekend. Anomaly of even more than 4 °C higher than normal is observed. 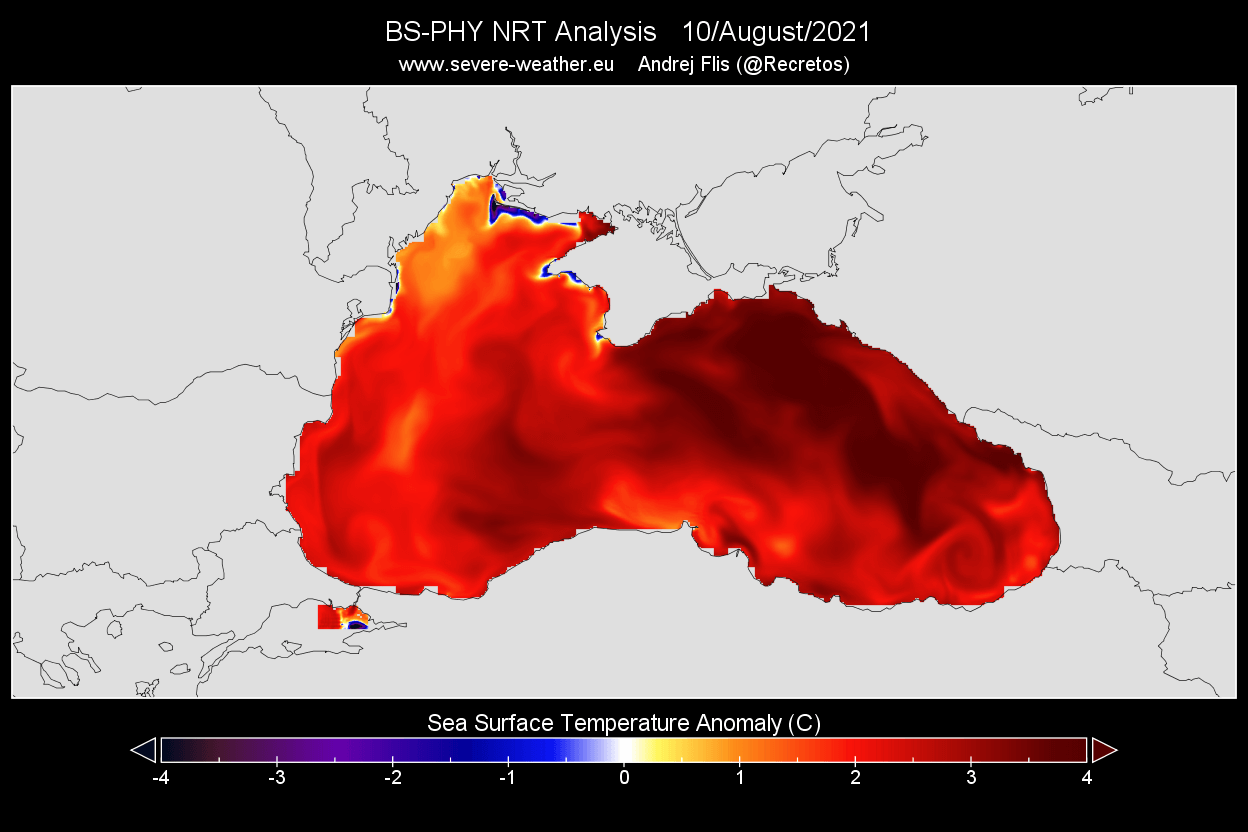 Those temperatures are more than sufficient for strong convective storms under the ongoing upper-low, which is forecast to remain over the eastern Black Sea region for a few more days. This will allow further development of the system attaining tropical characteristics.

There is a very good weather model agreement that a potentially intense tropical-like cyclone will form in the eastern Black Sea within the next two days.

Attached below is a phase diagram, showing the birth of the TLC along the northeastern coast of the Black Sea, generally moving towards the central parts and towards the potentially severe impact and landfall to the northern Turkish coast. Where exactly and how intense the TLC would be, is hard to define until the system finally forms.

We can see that the models hint at a definite symmetrical warm-core structure of the system. 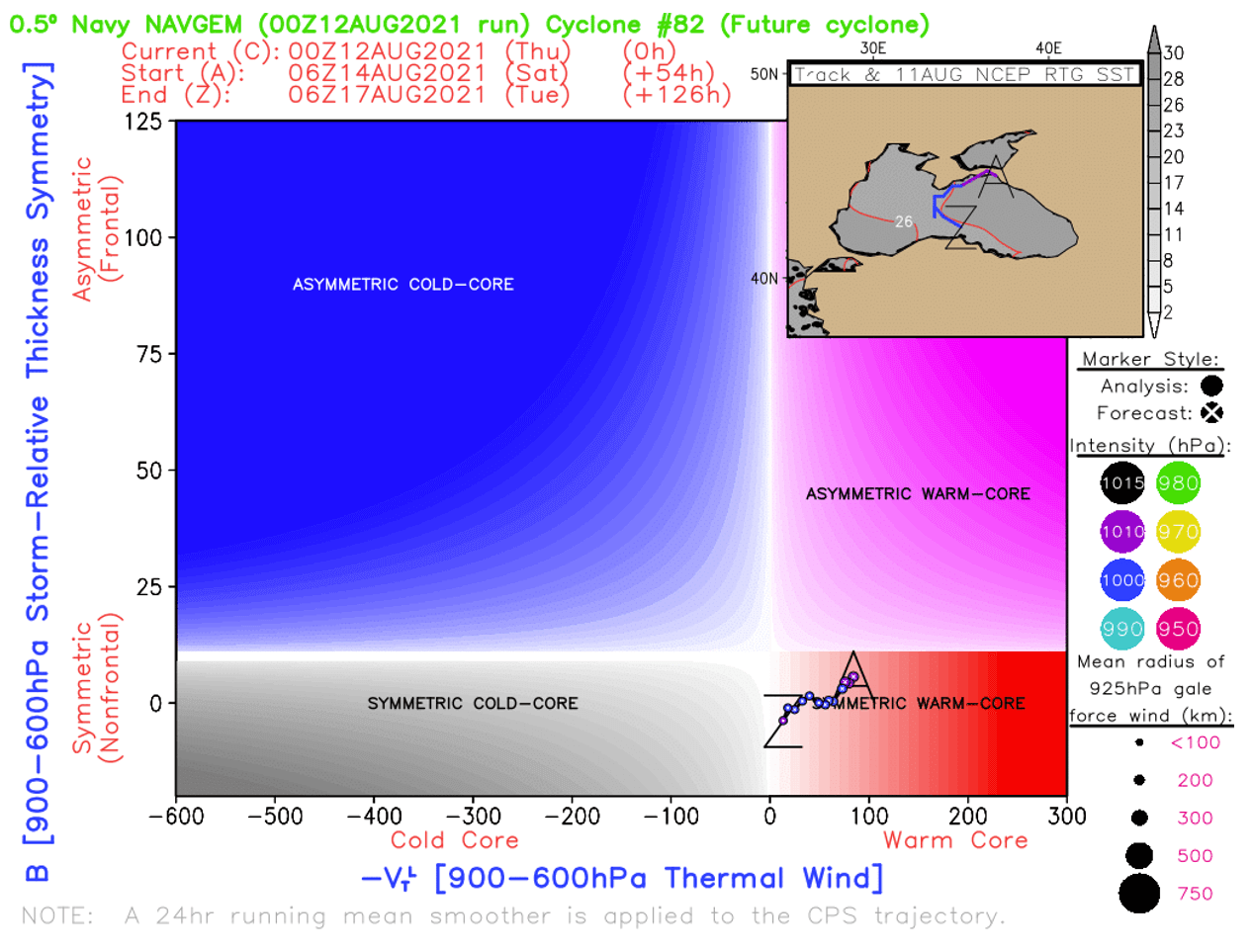 Despite the still some uncertainties regarding the intensity and the exact position of the cyclone, the general model consensus is impressively well-aligned recently. The most robust charts are normally with the high-resolution models which can better define small systems like TLCs are.

Here is the comparison of the ECMWF, GFS, and ICON-EU models. All three weather models do hint at a deep low over the Black Sea, ICON-EU being the strongest.

What is also important is that even the model agreement is good, the exact timeframe is still strongly uncertain. The faster solution is made by the ECMWF, hinting at the strong TLC formation through Saturday night. GFS model develops it on Sunday morning, while the ICON-EU model develops a powerful tropical-like cyclone by Monday morning.

Regardless of the time of occurrence and the exact position of the upcoming tropical-like cyclone, its impact could be severe for the coastal areas. High-resolution models do hint at very intense winds, approaching hurricane-force strength per the ICON-EU model.

Here is the wind gust swath forecast that could be produced by the TLC over the next five days. According to the ICON-EU model, the TLC forms along the northern coast of the Black Sea and intensifies while traveling across the central parts towards the Turkish northern coast.

This is indeed just one of the solutions as we could see from the model comparison chart earlier. But certainly, the potential for a dangerous tropical-like cyclone intense winds is in place. Once the cyclone forms, its track will be better defined. 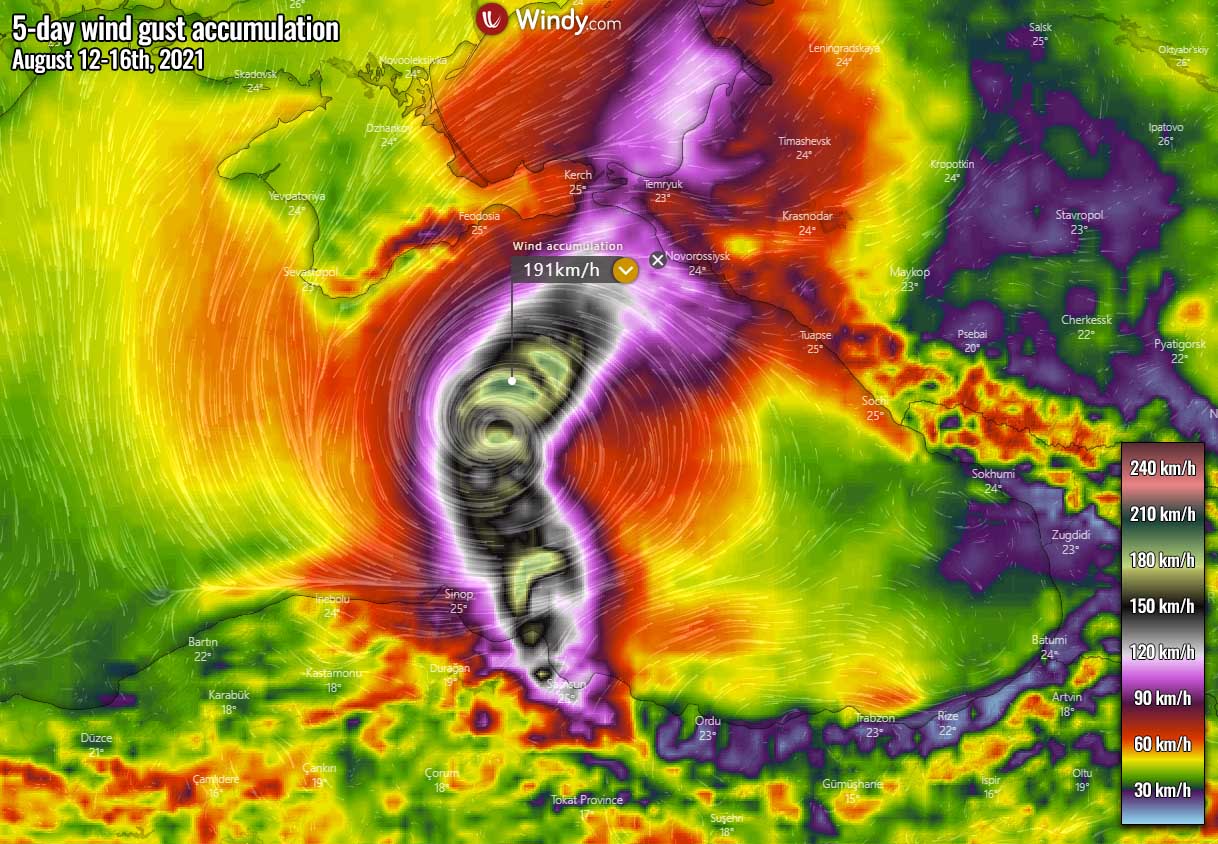 Along with the threat of severe wind, also a huge amount of rainfall is very likely to occur. How much rain and where indeed strongly depend on where the TLC would track, but intense convective storms could lead to several hundred millimeters of rain along its path. Leading to significant flooding threats.

Taking into account the general model differences in the exact path and timeframe of the TLC forecast track, the residents of both the northern and southern coast of the Black Sea should be alerted and closely monitoring the evolution of the system over the next 48 hours. 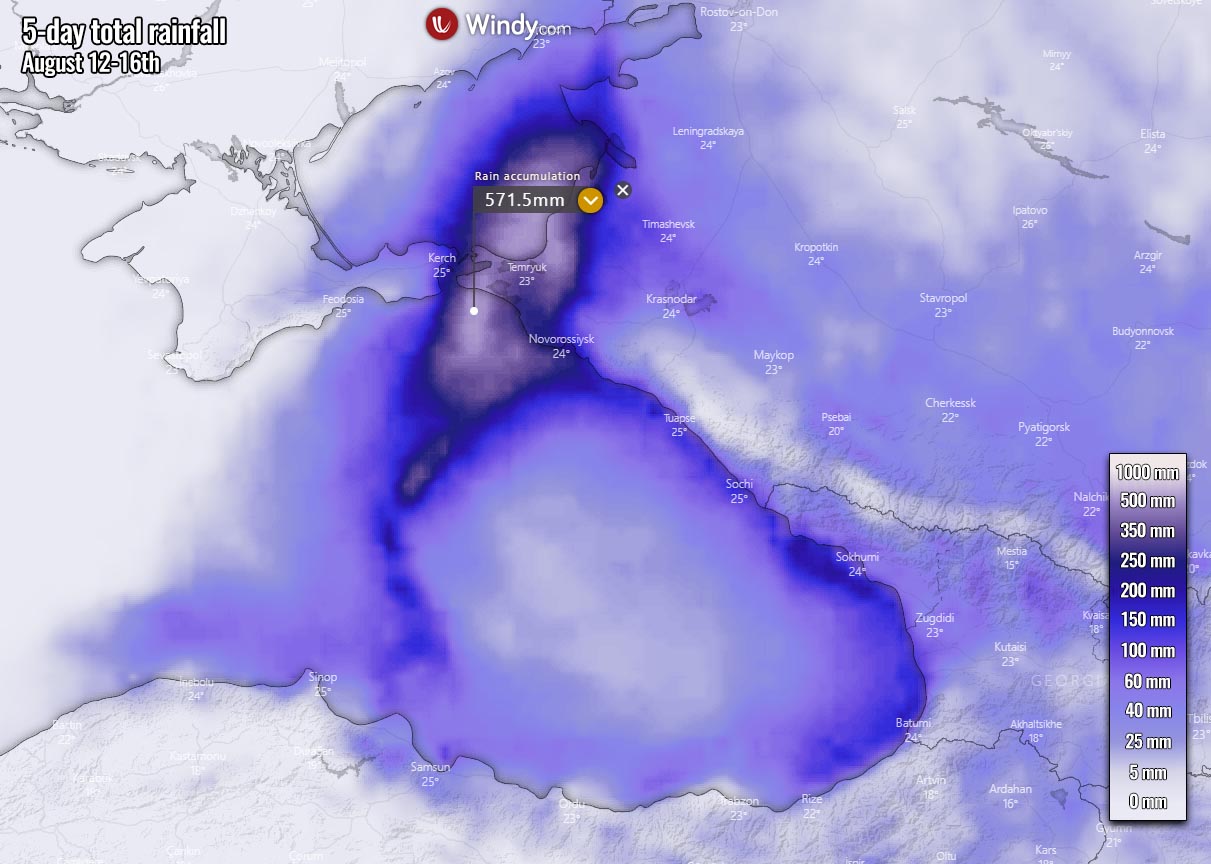 Our team is also tracking the system further and will update the forecast over the weekend when more model details and potential threats will be better defined. Stay tuned.