At least another week of below-normal and cold temperatures is expected across Europe as general patterns develop a blocking High over the North Atlantic with a strong surface high-pressure system. A cold wave with much colder weather will strengthen across a large part of the continent this week. Frosty mornings for many and quite some snow is likely across the Balkans and the Alps, but also towards the Iberia.

The winter has ended with unusually warm weather through the final days of February. It did bring a real feel of spring weather for many. But such period is usually of short breathe and not really welcomed as nature starts to wake up earlier than it should.

Through the first days of March, a more dynamic pattern has developed over the European continent, with more near-average weather, even with stormy in some parts, and indeed snow. An intense combo of two North Atlantic cyclones struck Ireland, UK, and the Faroes.

Through mid-March, the general weather pattern is changing as the North Atlantic gets into a more stable period, as the strong upper-level ridge is strengthening this week. This means an extensive high-pressure system will develop, extending also into the western half of Europe. Typically this shuts down the zonal flow and brings a colder period across the European continent.

This week, the cold wave will spread across a large part of Europe and reach all the way to southwestern parts. With the Iberian peninsula and the Mediterranean being quite below the normal in particular. Attached below is the animation of the cold air mass spreading across the continent over the next several days.

The colder period will surely bring additional days of frosty weather and cold mornings for many, but also quite some fresh snow across the Balkan peninsula countries as low-pressure develops over southeast Europe through the second half of this week.

As mentioned earlier, the general pattern across the North Atlantic and Europe is flipping this week, as a quite strong upper-level high develops over the Atlantic. With lower heights over the European continent, helping the more meridional, colder flow to spread far south. Looking over the mid-week period, we can see this pattern well-established. Cold cores over the Balkans also help to bring more moisture besides the cold. 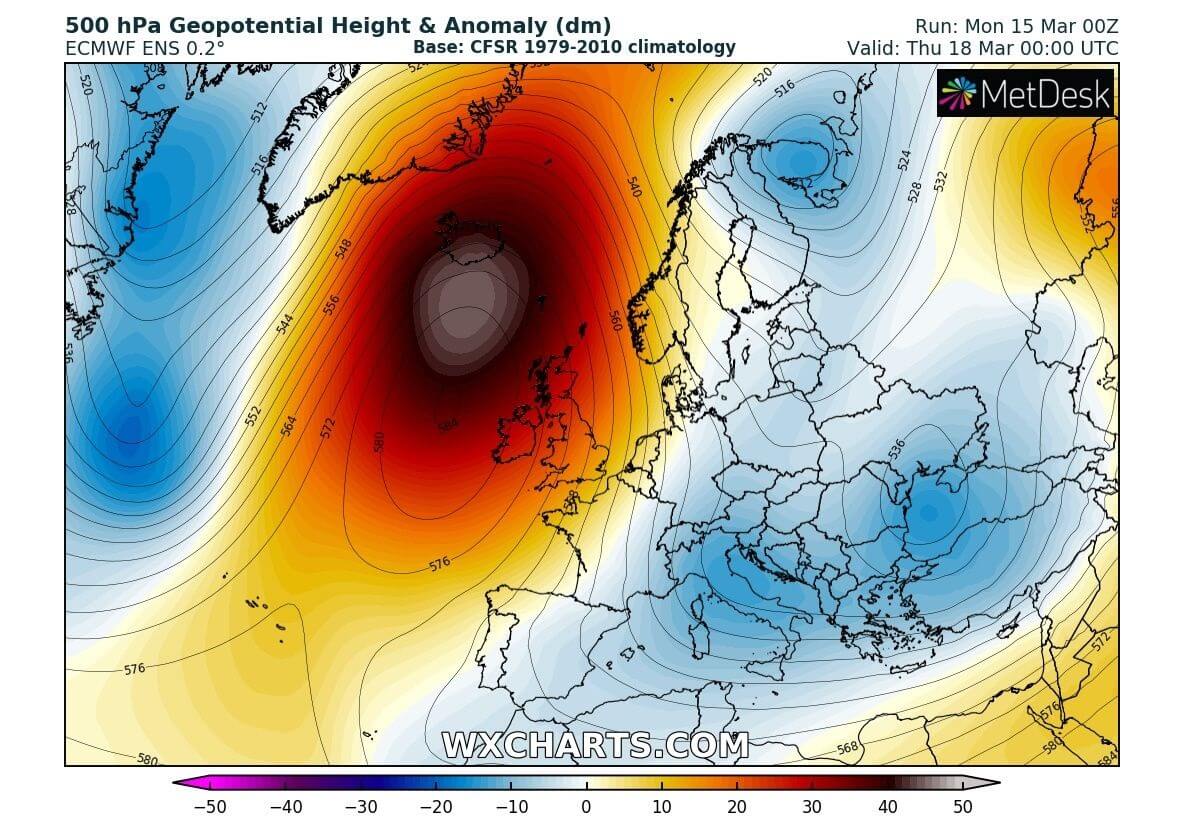 Once the North Atlantic ridge strengthens, strong surface high-pressure develops over western Europe as well. A lower surface pressure will spread across southern Balkan and the Black Sea region, establishing north-northeast flow towards the south. 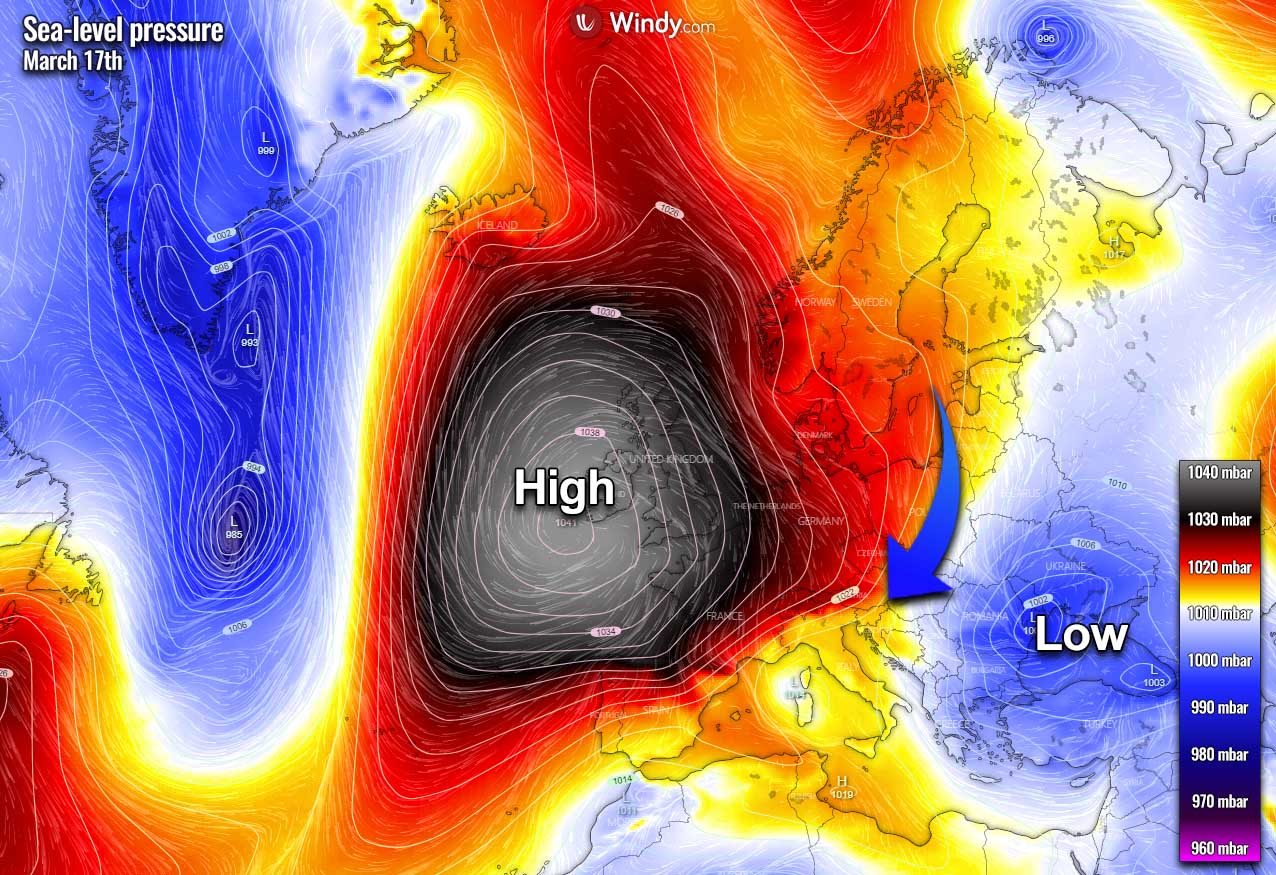 The cold will continue far south into central Europe, reaching the Mediterranean as well. And thanks to the center of the High due west of Ireland, also turning the cold wave towards the Iberian peninsula.

It seems that temperatures will be quite colder than normal for mid-March, about 6-8 °C below average in the lowest parts of the atmosphere. To the north of the surface High, powerful warm advection will spread over Iceland and Greenland, with near 15+ °C warmer than normal weather there. 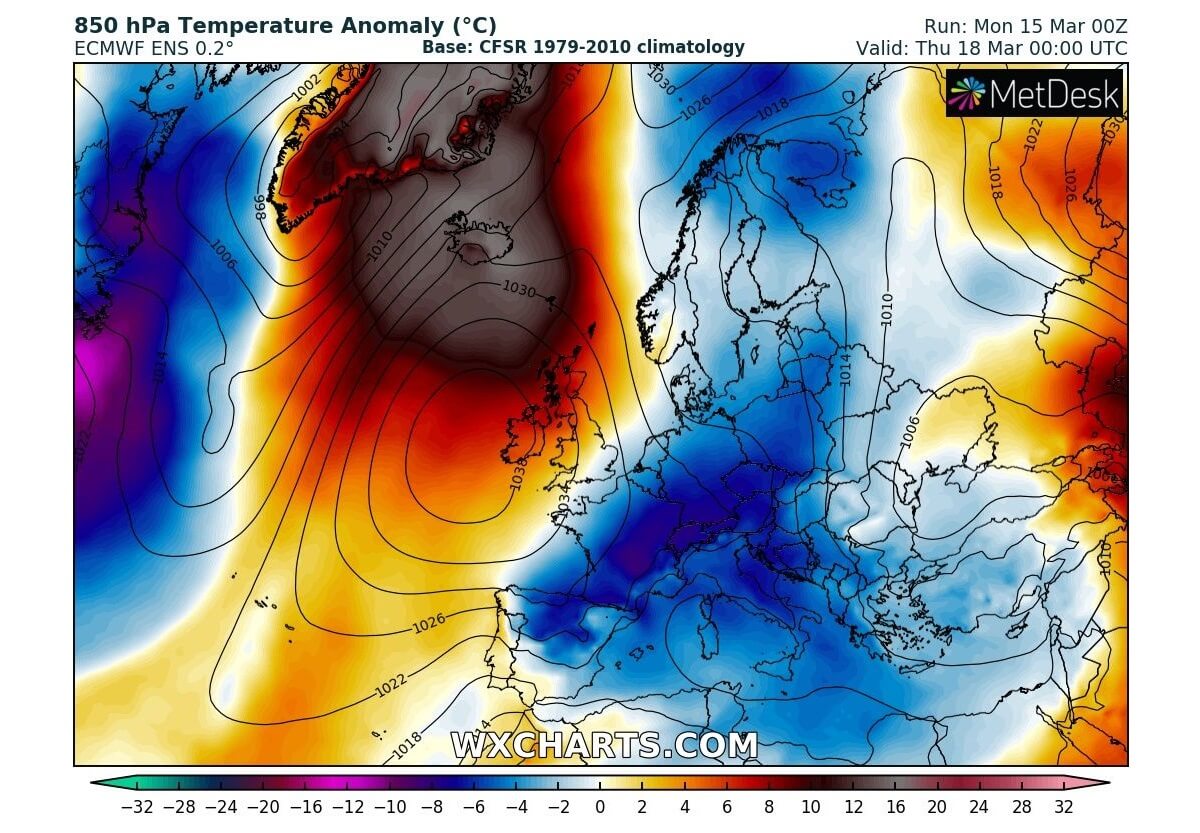 COLD STRENGTHENS FOR SOUTHWEST EUROPE OVER THE WEEKEND

Late this week into the weekend, the blocking North Atlantic pattern will somehow remain, but the upper ridge/High will become elongated. The core of the upper ridge moves over northwestern Europe, while the long-wave trough over the continent deepens towards the Mediterranean. 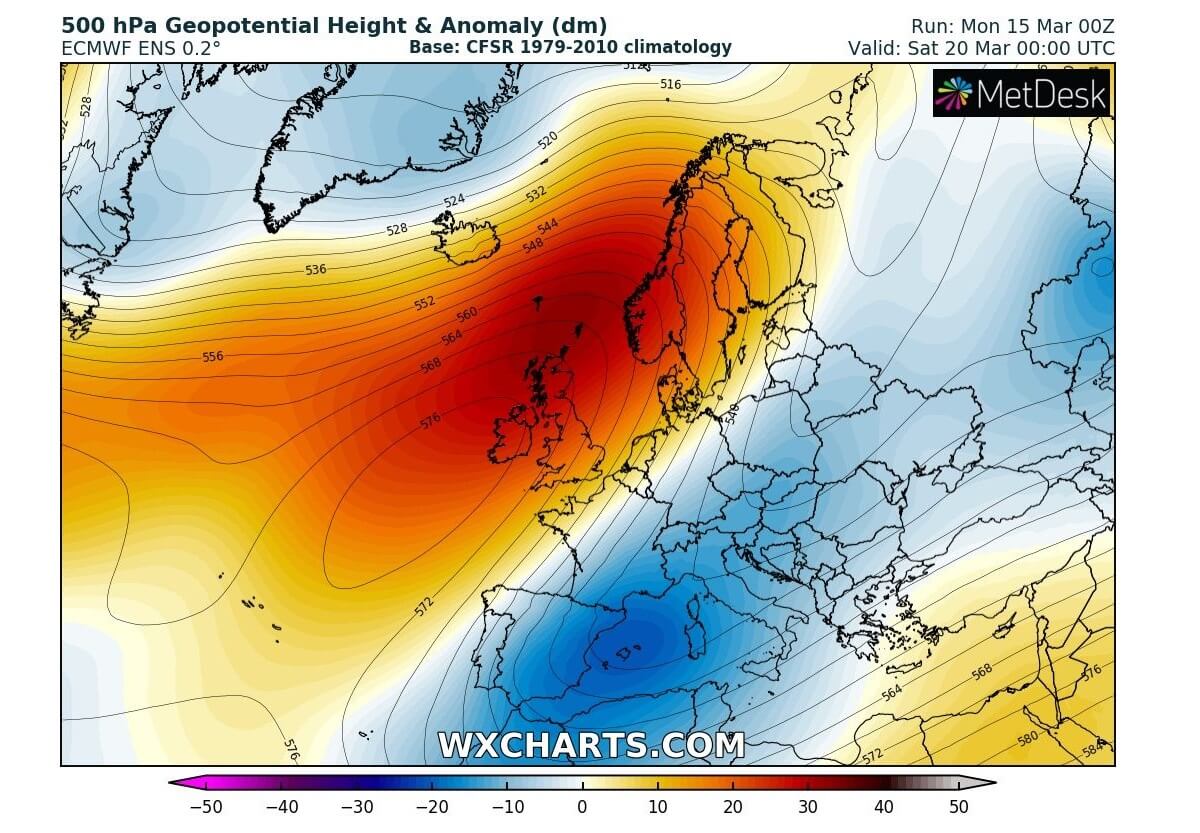 The surface high-pressure system, therefore, expands also further east and spreads across central and eastern Europe as well. It remains strong over the North Atlantic, around 1040 mbar in its center, west of Ireland. 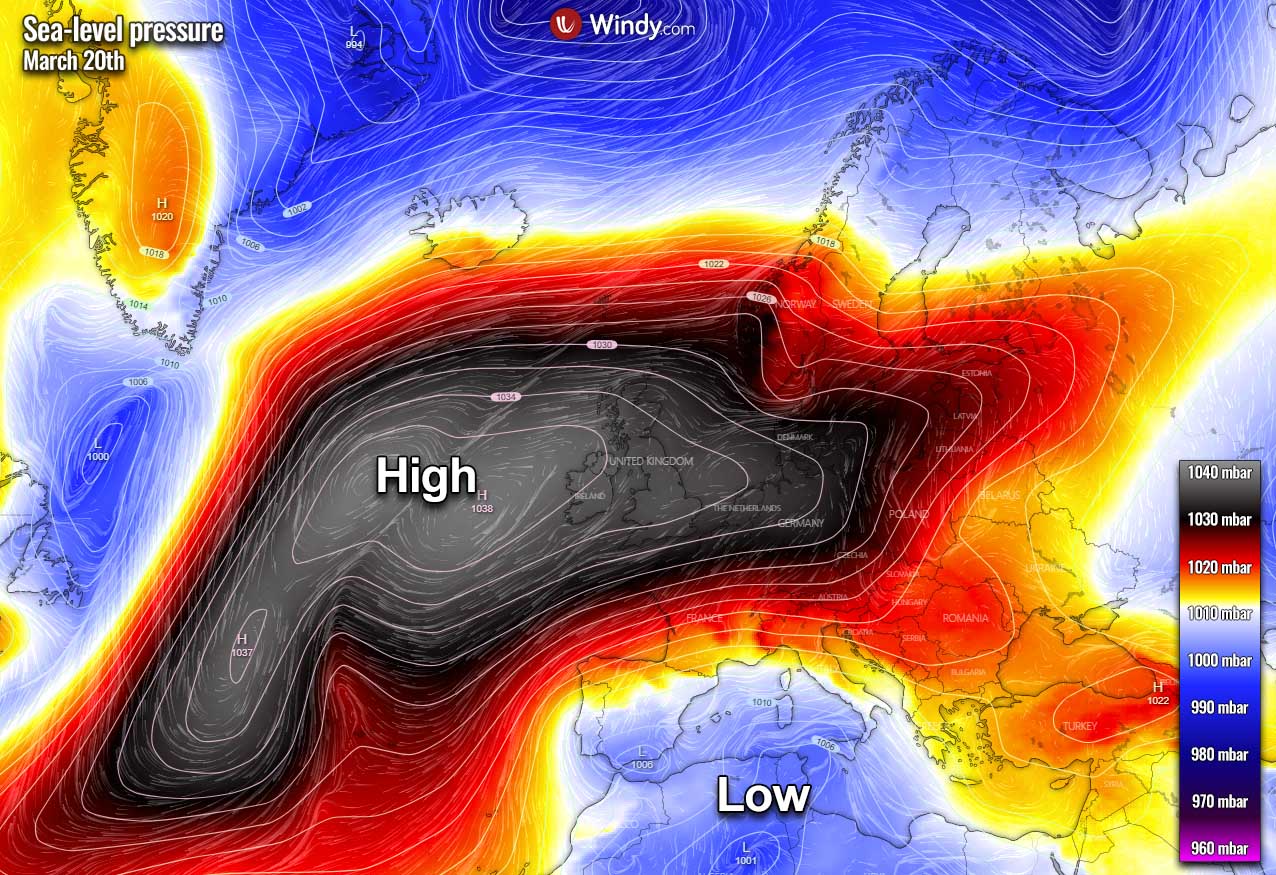 The more elongated blocking High will help the cold to maintain and even strengthen over the western Mediterranean and the Iberian peninsula. It seems that temperatures will be close to 10 °C below normal over Spain over the weekend. Quite cold for March.

As we can see from the 850 mbar temperature anomaly chart below, a large part of Europe will experience colder than normal weather late this week. With an exception of western and northern Europe, thanks to the upper High there and returning western flow along its northern flank from the Atlantic. 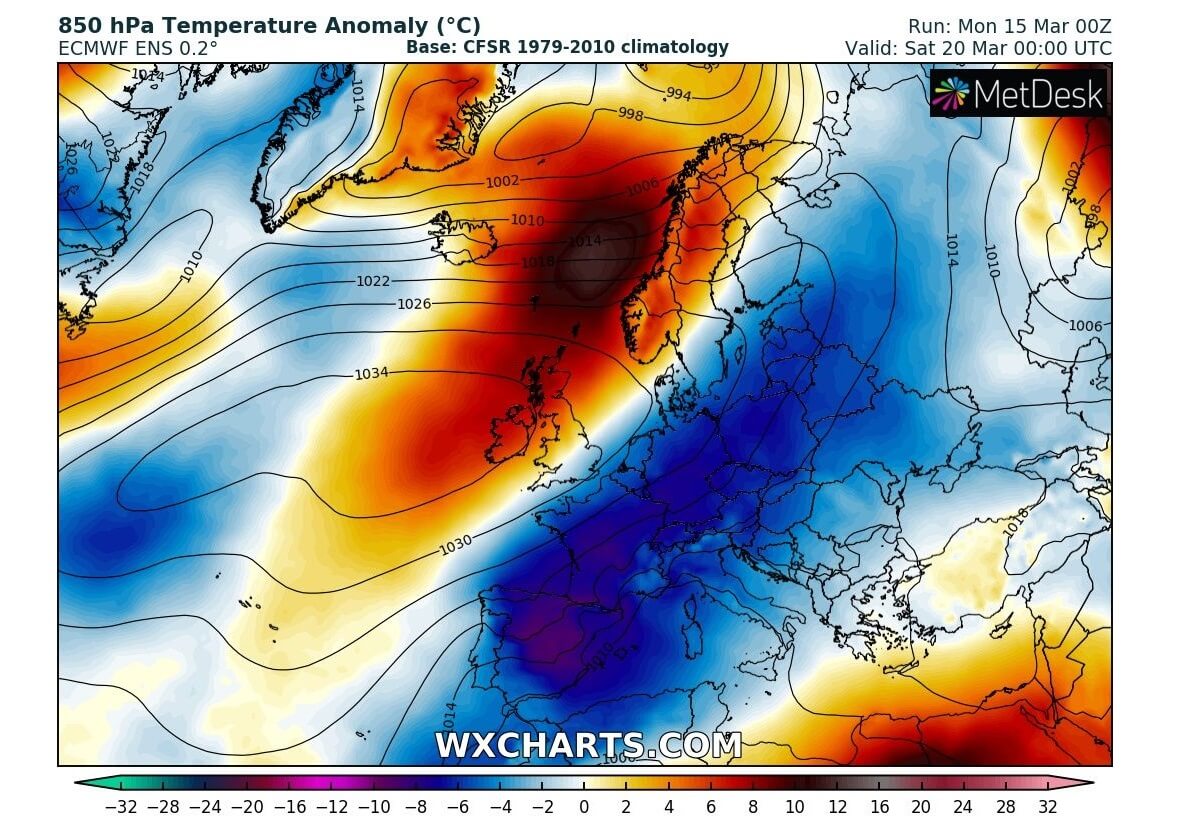 With the trough deepening into the Mediterranean, lower pressure also develops. This means precipitation and stormy weather are likely to develop over Spain and south-western the Mediterranean and Algeria/Tunisia. Also snowy over the higher elevation of Spain.

QUITE SOME SNOW OVER PYRENEES, THE ALPS, AND THE BALKANS

About 20-50 cm seems possible over the Pyrenees by the end of the week. Especially with the stronger cold advection after Thursday. Higher elevations of Spain should also see some fresh snow, possibly also southeast parts of France. 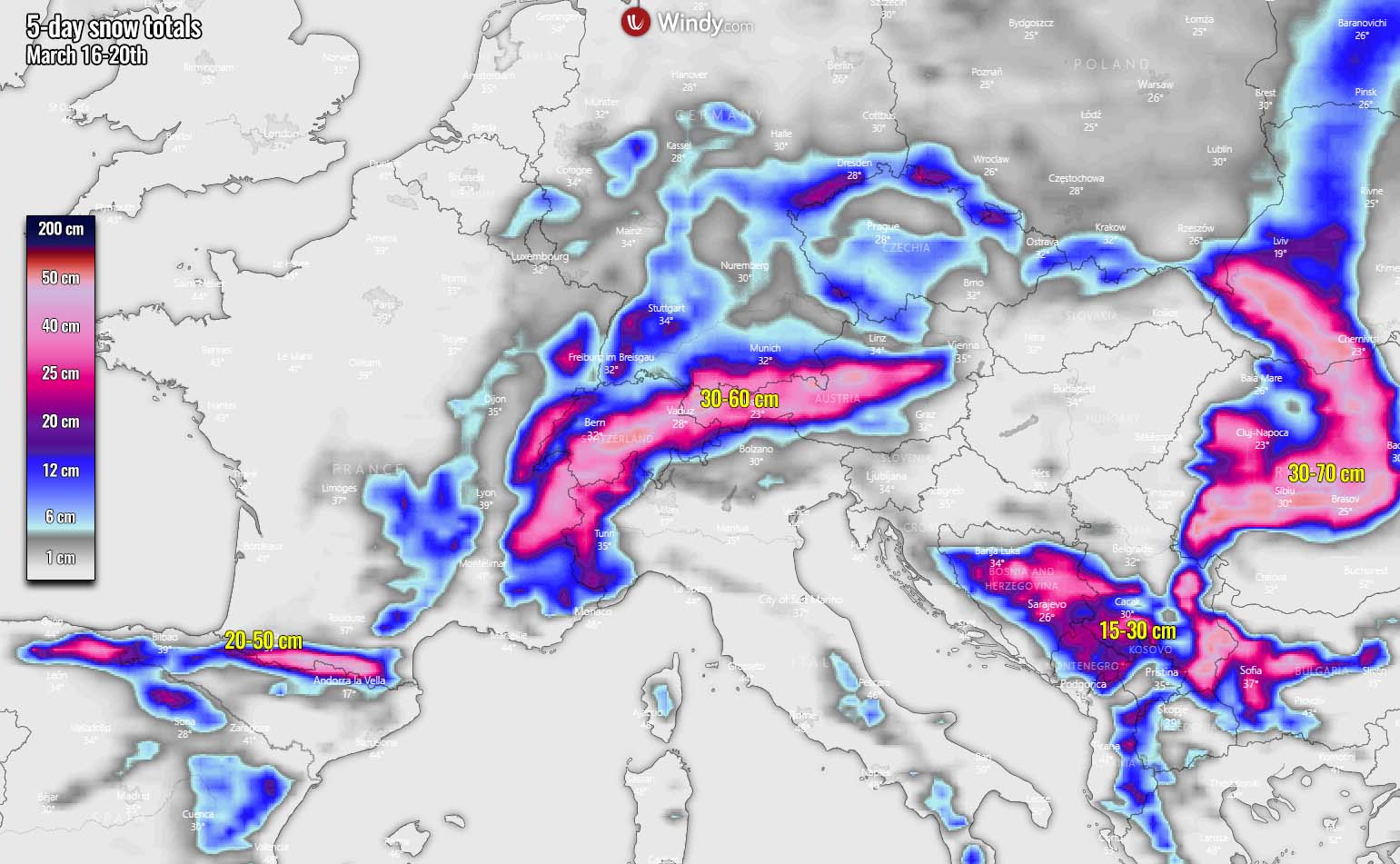 A general northerly flow over the continent usually results in orographic precipitation along the northern Alpine flank, across Switzerland and northern Austria. 30-60 cm or even more locally of fresh snow is quite reasonable to expect this week.

As discussed above, the mid-week lower pressure system and front over the eastern Balkans and the Black Sea region develop winter weather over the peninsula. The highest amounts of snow are expected across the Carpathian Mountains in Romania and western Ukraine, about 30-70 cm through Sunday.

Some snow seems also over the southern and central Balkans, including Bosnia, Montenegro, southern Serbia, and western Bulgaria.

After the weekend, the general pattern change seems to develop as the strong, elongated upper High vanishes and strong zonal flow develops over northern Europe. This typically brings frontal systems and Atlantic storms into Scandinavia, dumping a lot of precipitation over higher, mountainous Norway. 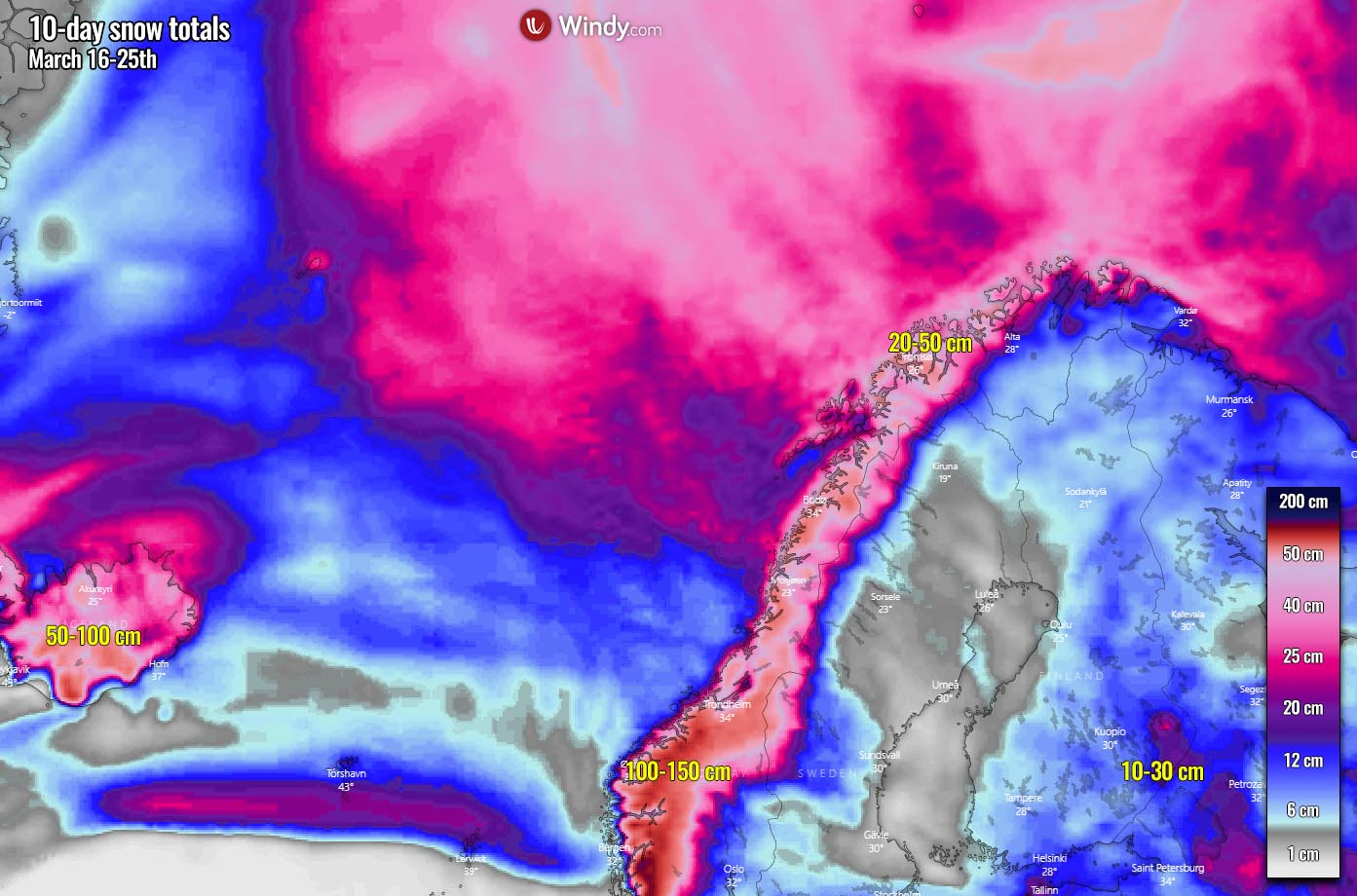 Although the chart above covers a 10-day period, it seems that a lot of snow is likely across Norway next week. Potentially even more than 100 cm in the southwestern parts. Depends on how intense the Atlantic lows will develop and spread high moisture to the peninsula.

Further trends through the remainder of March into early April:

Polar Vortex now starts to slow down, affecting the weather patterns in the coming weeks, as we head deeper into Spring

Stay tuned for further developing pattern as we turn into the next weeks. We will soon start with out traditional Severe Weather Outlooks as well. So make sure to bookmark our page, and activate the “show more” button on this article if you are reading us from the Google Discover feed.