Spring weather is already taking over the Northern Hemisphere. But the transition from winter to spring is never so simple. Currently, we are seeing a direct weather influence by the stratospheric Polar Vortex, which is in its final weeks as it is slowly shutting down, until next winter.

It takes a lot of energy to change seasons, and to no surprise, the weather is full of energy. As you will see, the same power that provided cold arctic outbreaks across the United States and Europe will now aim to further stabilize the Spring weather patterns.

POLAR CIRCULATION AND THE WEATHER

Every winter we hear a lot about the jet stream, Polar Vortex, and polar circulation. They are all part of the same system, having a direct influence on our weather.

The example image below features all in one, as it shows the temperature at around 4km altitude. It nicely outlines the main core of the polar vortex over the hemisphere (cold colors). The jet stream is usually found on the boundary between the warm and the cold air masses. 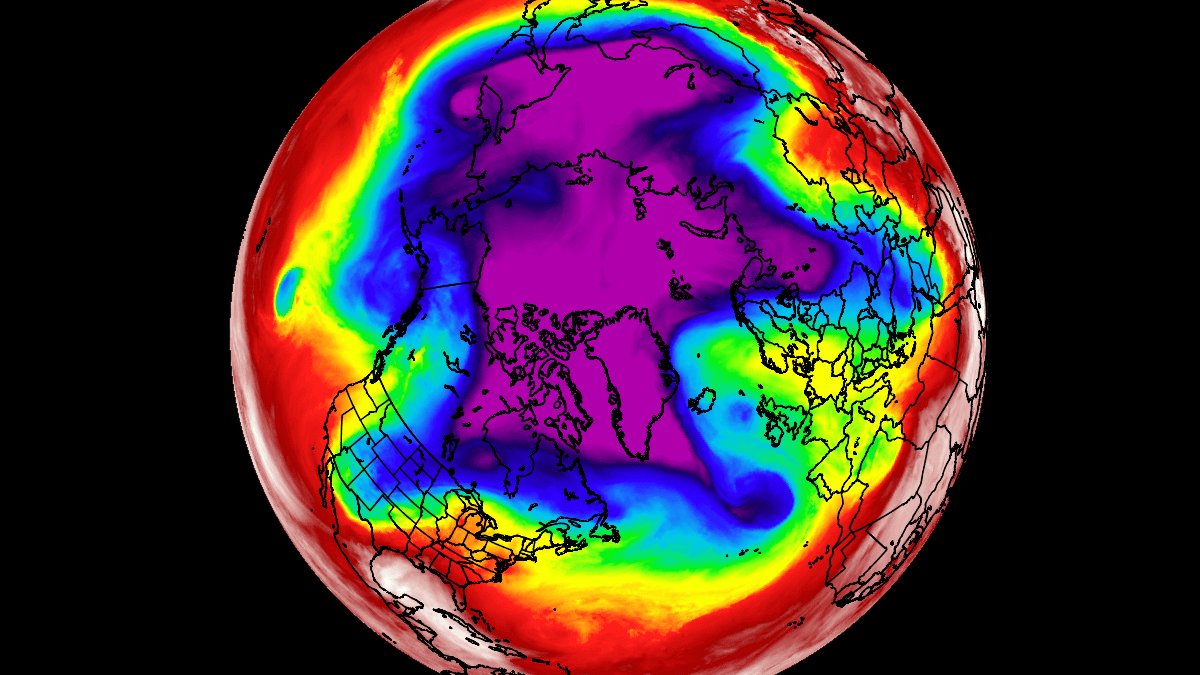 We produced a high-resolution video forecast of this polar circulation, where you can see it in much more detail, how this large system works, driving the pressure systems, the jet stream, and our weather.

To keep a better track of all these processes, a simple weather index was invented, called the Arctic Oscillation (AO). This is very similar to a stock market index on Wall Street, as it also goes (oscillates) up and down.

Below we have a very simple schematic of the Arctic Oscillation (AO). The positive AO means a strong jet stream and strong circulation. It locks the colder air into the Polar regions, with mild/warm conditions usually prevailing in the mid-latitudes. It is opposite in the negative AO mode, where colder air has an easier way of escaping the polar regions and moving down into Europe or parts of the United States. 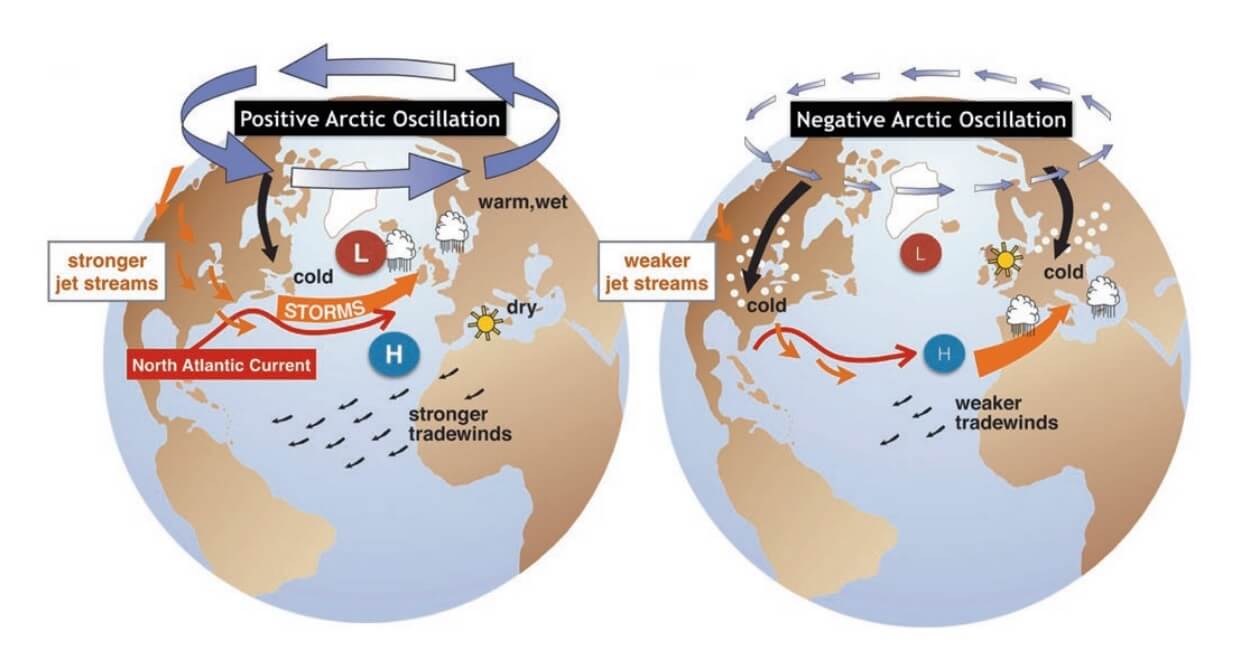 The image below shows the typical pressure anomaly during a negative polar circulation (AO) mode. You can see high pressure dominating the North Pole. That unlocks the cold air out of the Arctic and down into Europe and the United States. 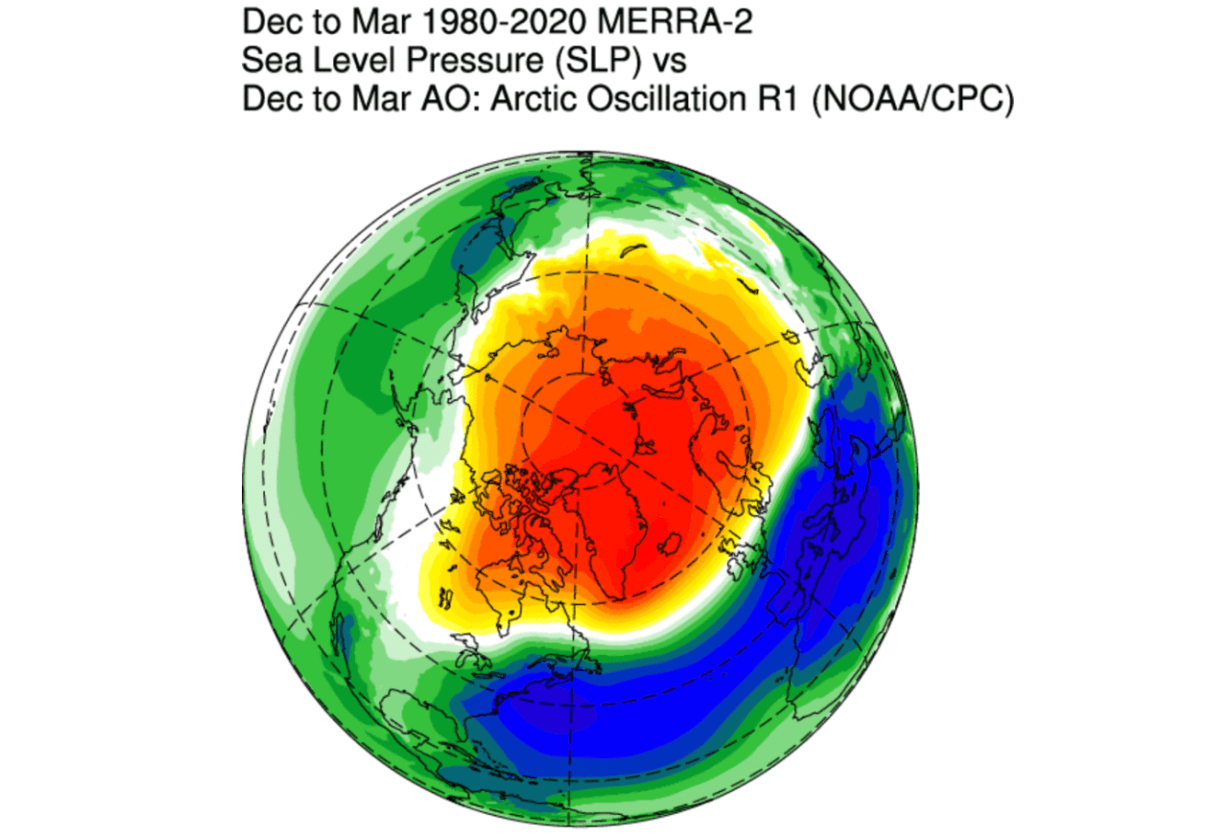 Looking at the temperature pattern during a negative polar circulation, you can see the displaced cold air. We have colder than normal air over central and eastern United States, northern and central Europe, and Siberia. 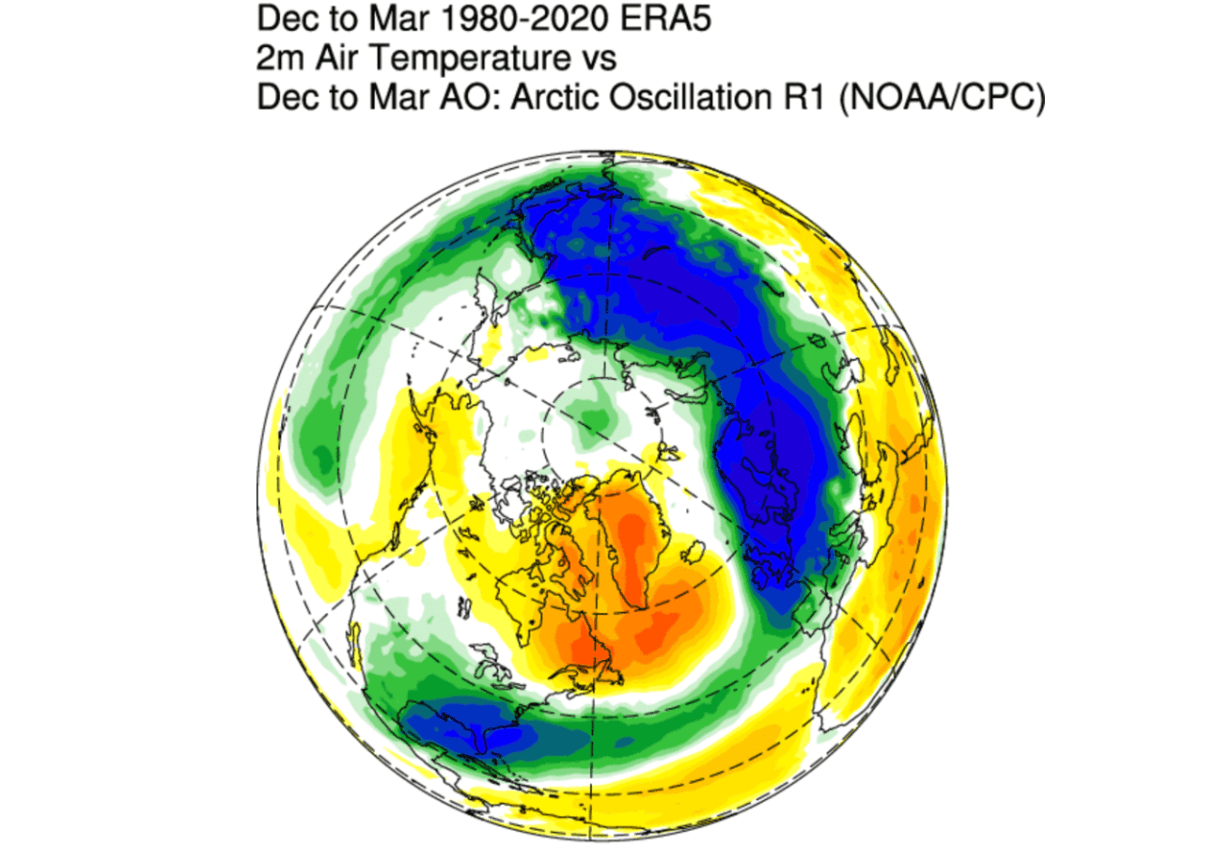 Below is the sea-level pressure anomaly for winter 2020/2021. We can nicely see the exact pattern as the negative Arctic Oscillation shows above. High pressure over the North Pole and low-pressure displaced towards the lower latitudes.

The temperature anomalies in winter 2020/2021 are also similar to the negative polar circulation. Very cold Eurasia, with colder temperatures also over western Europe and most of the southern and eastern half of the United States. This is almost a 3-month average, so individual cold outbreaks are not seen, except for the southern United States, which was very intense.

Below we have the forecast of the Arctic Oscillation (AO), which also shows the historic values since mid-November. The AO is currently positive, after being negative for much of the winter, as we have seen above. The forecast keeps it positive, after a brief weather pattern re-adjustment in the coming days.

FROM WINTER TO SPRING…

This winter was perhaps a bit unusual as far as the polar circulation goes. For most of the winter season, the polar weather circulation was persistently in the negative mode.

The image below shows two graphs. On the bottom, we have the polar circulation (AO) index, which is strongly negative for much of the winter season. Above it, we have the pressure anomaly in the lower 30km of the atmosphere.

What stands out, are the strong high-pressure anomalies coming down from the higher layers of the atmosphere in January. That was due to a strong Stratospheric Warming event and the Polar Vortex collapse. A lot was written already about this event, and we will include a link on the bottom to a more detailed analysis of these events and how they impacted our weather.

The stratospheric warming event has strongly disputed the circulation, first in the stratosphere, end then also lower down, influencing our weather in January and February. But in the last three weeks, we can see the lower pressure began taking over. Some of it is from the recovering Polar Vortex, which is connecting down to the surface (blue arrows).

The image below is another analysis of pressure anomalies but in the lower 50km of the atmosphere. You can see the strong positive anomalies starting in early January, quickly making their way down to the surface, and impacting our weather. That was the strong Stratospheric Warming event. 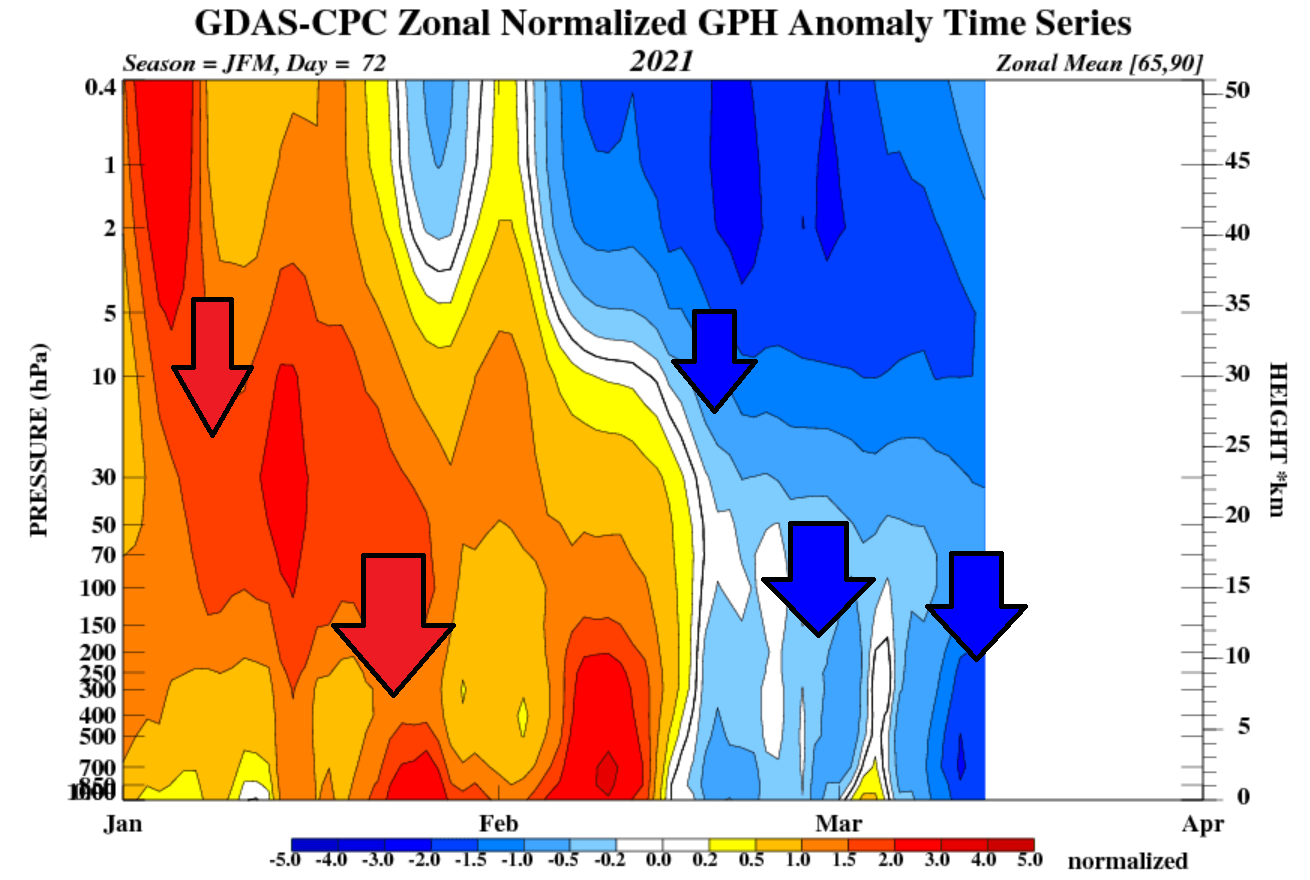 But you can also see on the image above, that low-pressure anomalies are now dominating higher up in the atmosphere. This is a sign that the polar circulation at that level is now recovering, extending its influence downwards, and amplifying the polar circulation, pushing it into the positive mode.

Taking a look at the forecast, we can see this low-pressure area extending downward from the higher levels of the atmosphere, towards the surface, and impacting our weather. This trend is set to continue into late March and also early April 2021.

These higher levels are the domain of the stratospheric Polar Vortex. Seeing these low-pressure anomalies extending down can only mean that the Polar Vortex has strengthened again, trying to take control of the weather patterns.

Below is an image of the polar vortex at around 30km altitude. You can see its shape and temperature. It is now displaced towards the Siberian sector. It is in a good shape, with the core temperature down to -70°C.

But towards the end of March, there will be a high-pressure system emerging over the Pacific sector, pushing against the Polar vortex. Some minor warming is seen over east Asia, but it should not disrupt the Polar Vortex too much, as it will maintain its composure.

One way to measure the strength of the Stratospheric Polar Vortex is by looking at the wind speeds around it. Think of this like the jet stream at a higher altitude. The forecast image below by Simon Lee, shows the wind speeds increasing slightly into late March. But going into April, the Polar Vortex will start to lose strength. 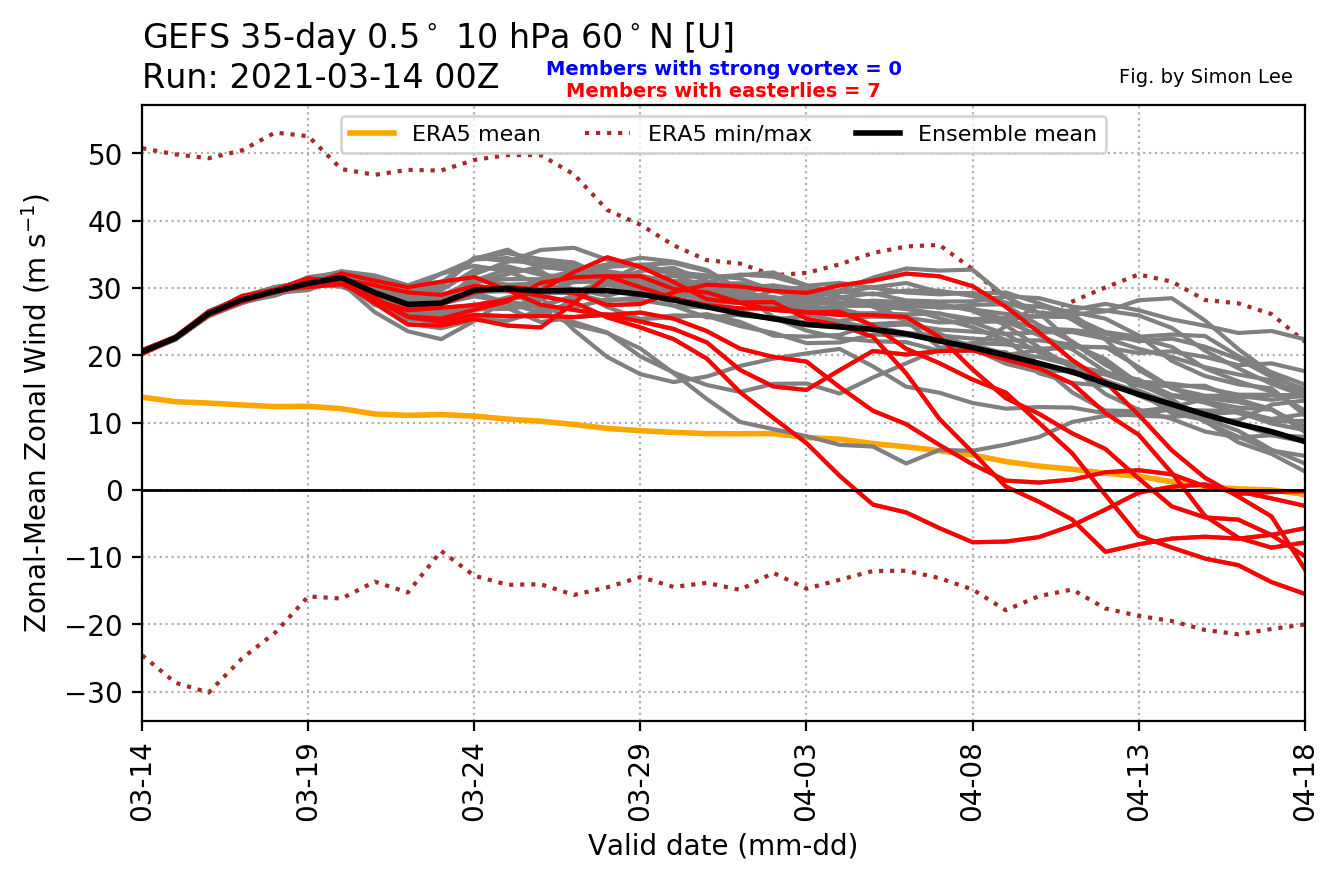 The ECMWF extended forecast also calls for the start of the shutdown sequence of the Polar Vortex into April. An end of the polar vortex is considered when the zonal wind speeds reach 0. By this forecast, that would occur in the second half of April 2021. 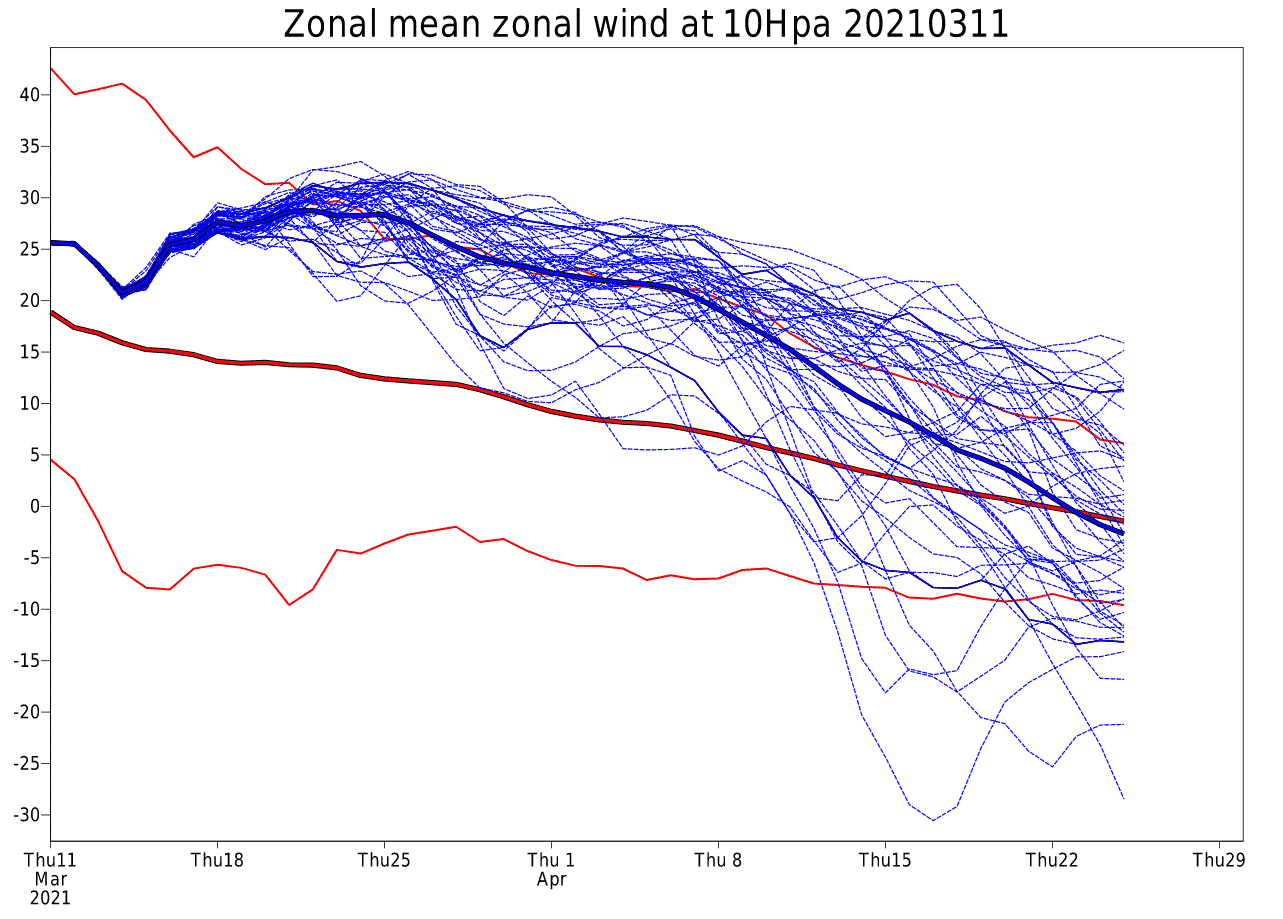 Currently, we have a low-pressure system transiting over the United States, while a ridge sits above it in Canada. The low-pressure system has brought a large amount of snowfall and also a severe weather outbreak, which will continue in the coming days.

A high-pressure system is advancing over the North Atlantic, temporarily helping to transport colder air down from the north into Europe. This is currently the slightly weakened polar circulation that we have seen on the forecast earlier in the article. 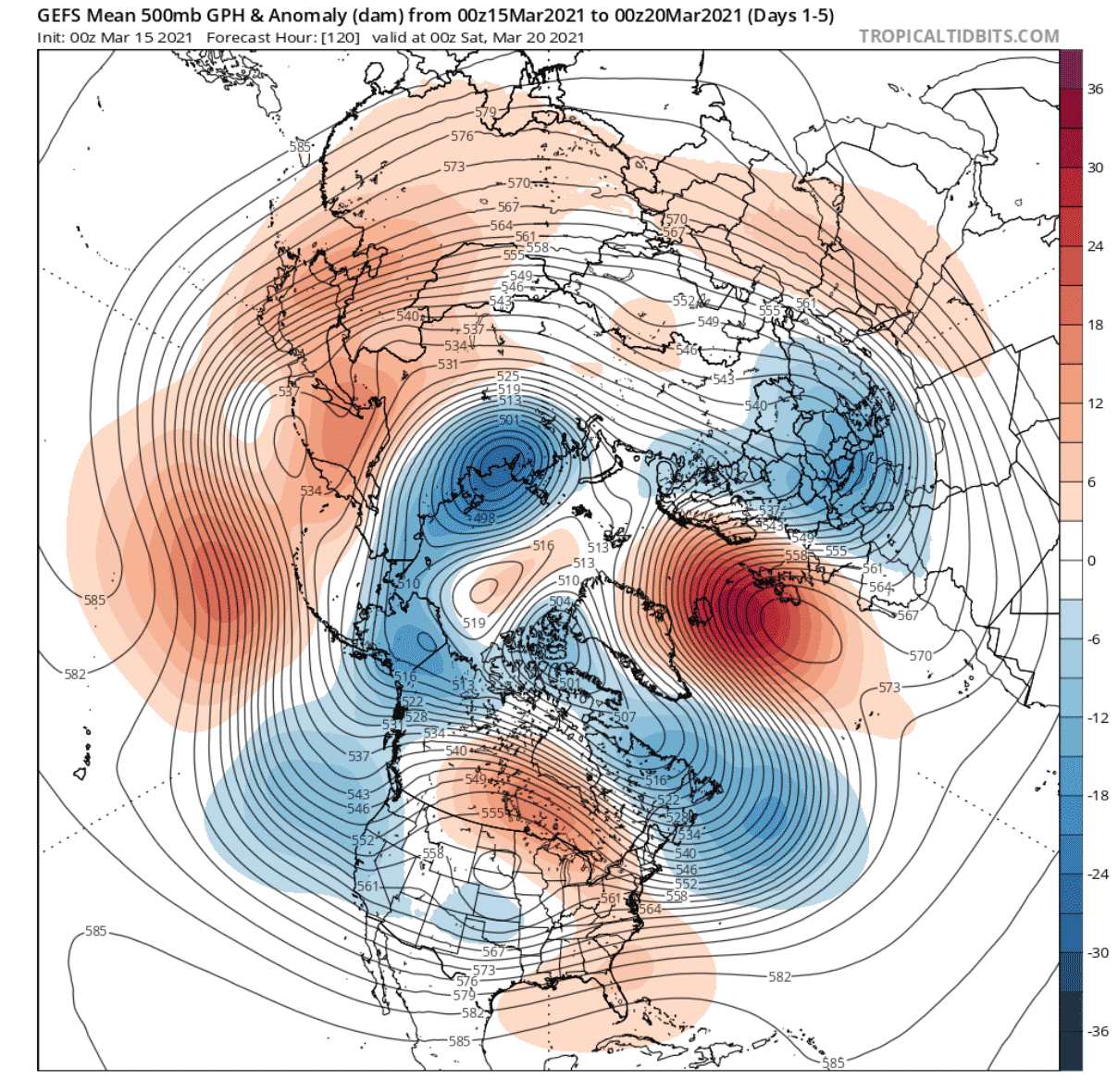 Temperature anomalies reveal the passing of the cold system over the central United States. At the same time, the southerly flow brings unseasonally warm temperatures into central Canada. Alaska and northeastern Canada are under more northerly flow, with colder air outbreaks.

On the other side of the Atlantic, Europe will be under a cold air intrusion from the north, brought down by the high-pressure system in the North Atlantic. 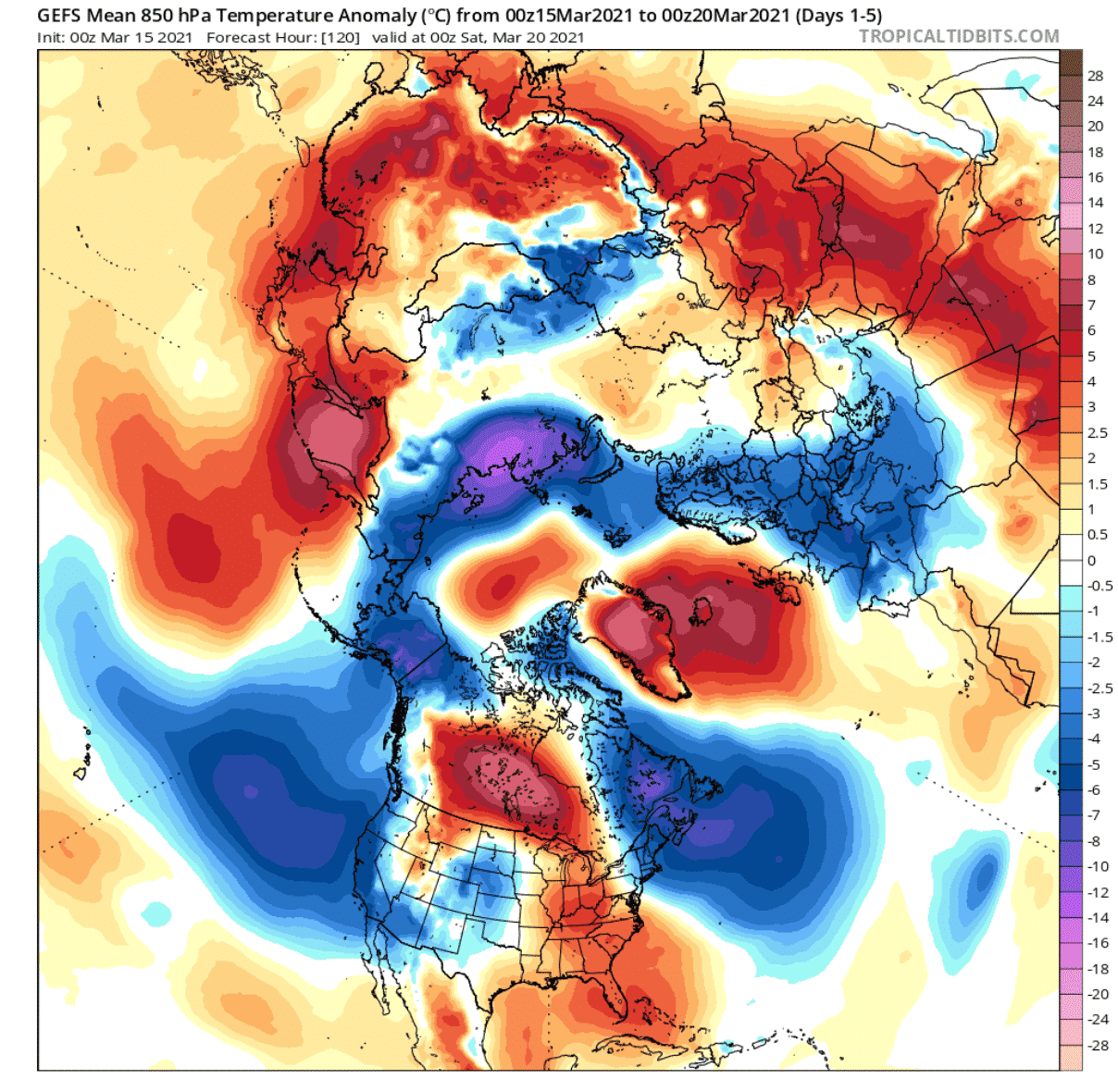 The transition into the final week of March will see pressure dropping over the North Pole. As seen earlier in the article, this is a likely connection of the stratospheric Polar Vortex downwards, trying to reorganize the polar circulation. A low-pressure extension will be over western Canada and the western United States, while a high-pressure system builds over east Canada and the eastern United States.

In the meantime, the high-pressure system will move from the Atlantic over to northwest Europe, maintaining a northerly to easterly flow over the continent. 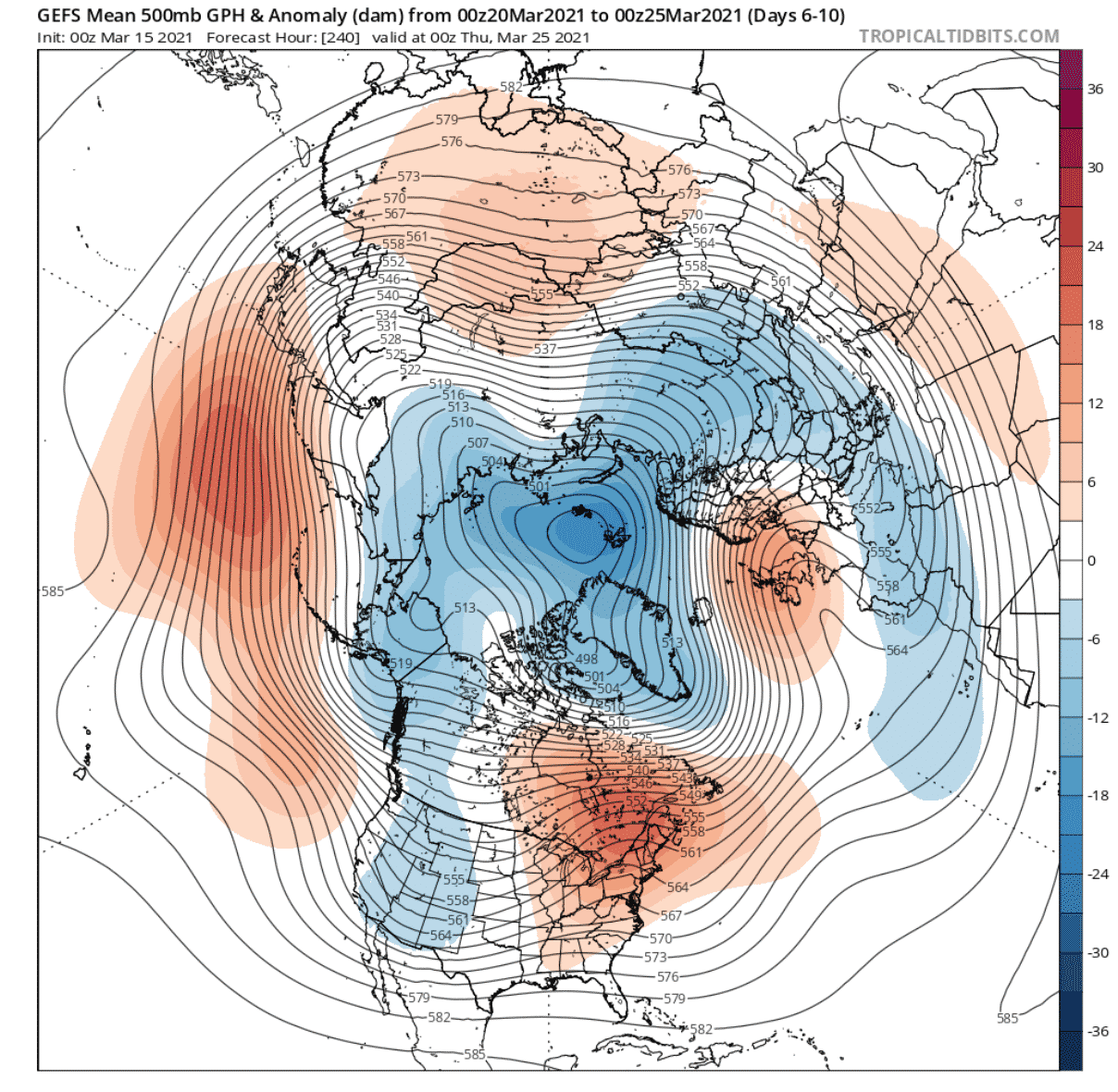 Looking at the temperature forecast below, we see the main bulk of the arctic airmass being confined more to the North Pole. Colder than normal airmass is expected over the western United States, as the low-pressure system moves in. Over north-central and the northeastern United States and eastern Canada, unseasonably warmer temperatures will prevail.

Over Europe, the high-pressure system will hold a warmer airmass over the British Isles and parts of Scandinavia, but also cooler air over the continent and towards the east.

The low-pressure area over the North Pole will strengthen due to the stratospheric Polar Vortex, which will be at its peak strength in late March, before starting its slowdown sequence.

You can see on the two images below, where the position of the Polar Vortex will be. The first image is at around 20km altitude (50mb level), showing the core of the vortex over the Arctic. The second image shows the pressure pattern in the lower levels (5km), with the strong low-pressure system directly under the core of the stratospheric vortex. 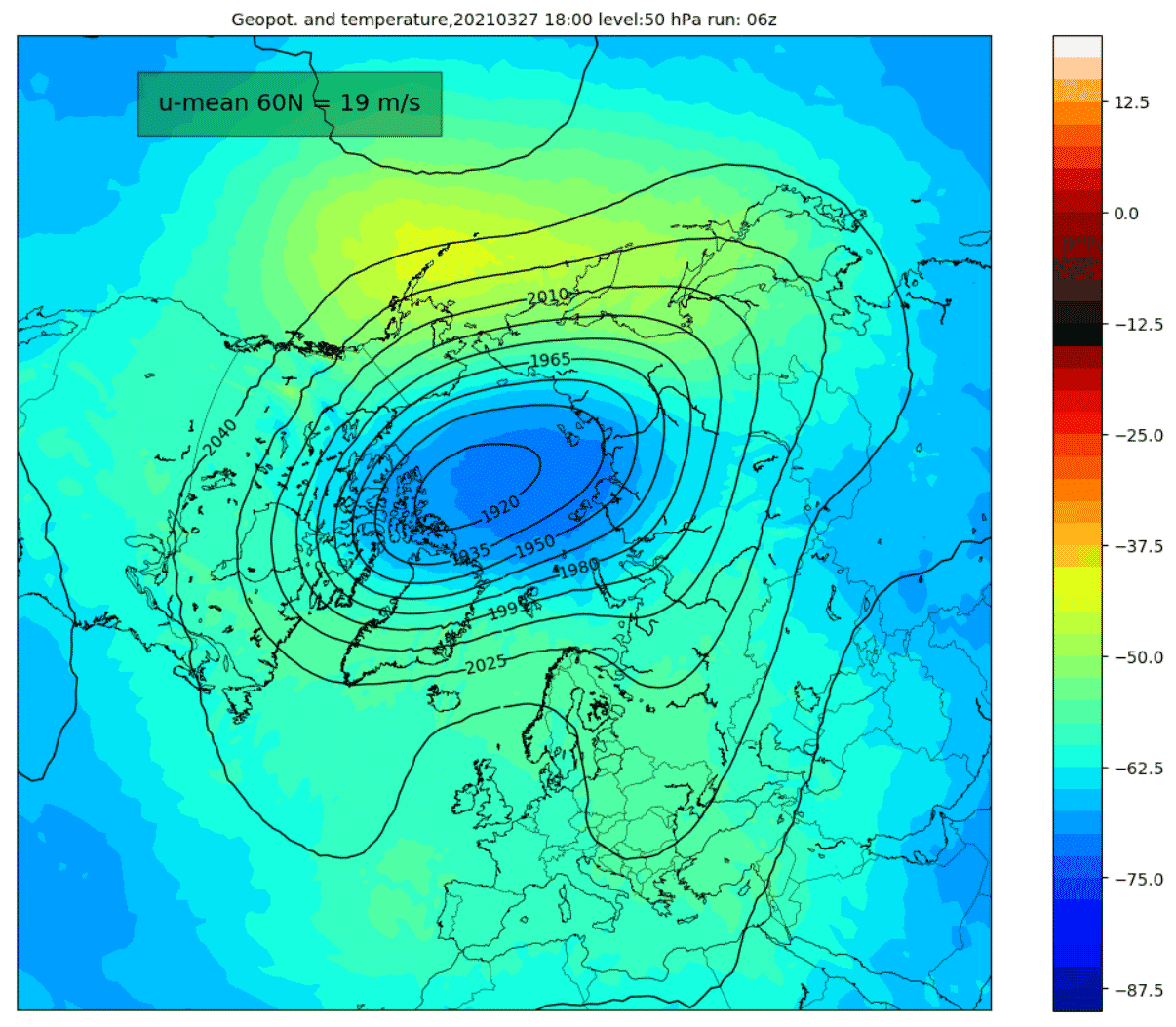 But early April will likely see some minor adjustment. The high-pressure area over northwestern Europe will crawl further northeast over Scandinavia. Behind it, a low-pressure area will prevail in the North Atlantic.

The temperature forecast below shows the coldest air remaining closer to the polar regions. Warmer than normal conditions will prevail over the northeastern United States and eastern Canada under the high-pressure system.

The rest of the continent remains under fairly normal conditions. The exception is the southern and partially southeastern region of the United States. There we could see some cooler conditions and also more severe weather potential, as a low-pressure system transits from west to east.

Despite transitioning into a stronger polar circulation mode, with activation of Spring weather, cold fronts in transition can be a common occurrence in the early weeks of Spring.

Looking at some ensemble forecast trends for the United States and Europe, we can see the temperatures are seasonally increasing. Temperature trends do not indicate major long-term cold periods developing, with only transitional cold fronts likely. Forecast show trends for Milwaukee and Dallas in the United States, and Hamburg in Germany, Europe.

The temperatures on these images are at the 850mb pressure level, which is around 1500m (5000ft) altitude. This gives un an idea of the type of air mass (colder/warmer). Temperatures at the surface are in most cases a few degrees warmer. 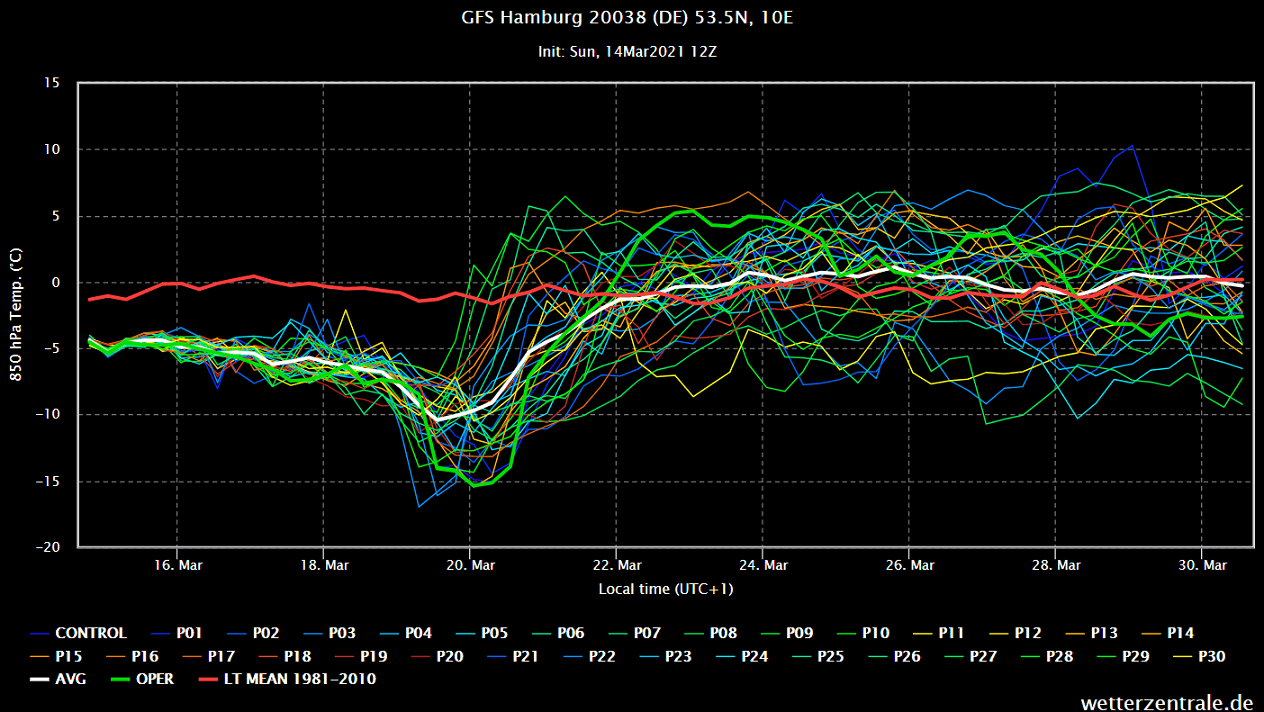 Each line represents one calculation from the ensemble. Running so many forecasts at the same time allows us to see more likely scenarios and the strength of the developing trends. Each calculation has a slightly different starting condition, to compensate for the uncertainty in the model analysis.

Looking ahead over the entire month of April, the pressure forecast from CFSv2 does show strong high-pressure areas over northwestern Europe and the North Pacific. We do not see any high-pressure zones present over the North Pole, signaling the Polar Circulation will be in a more prevailing positive mode this month. 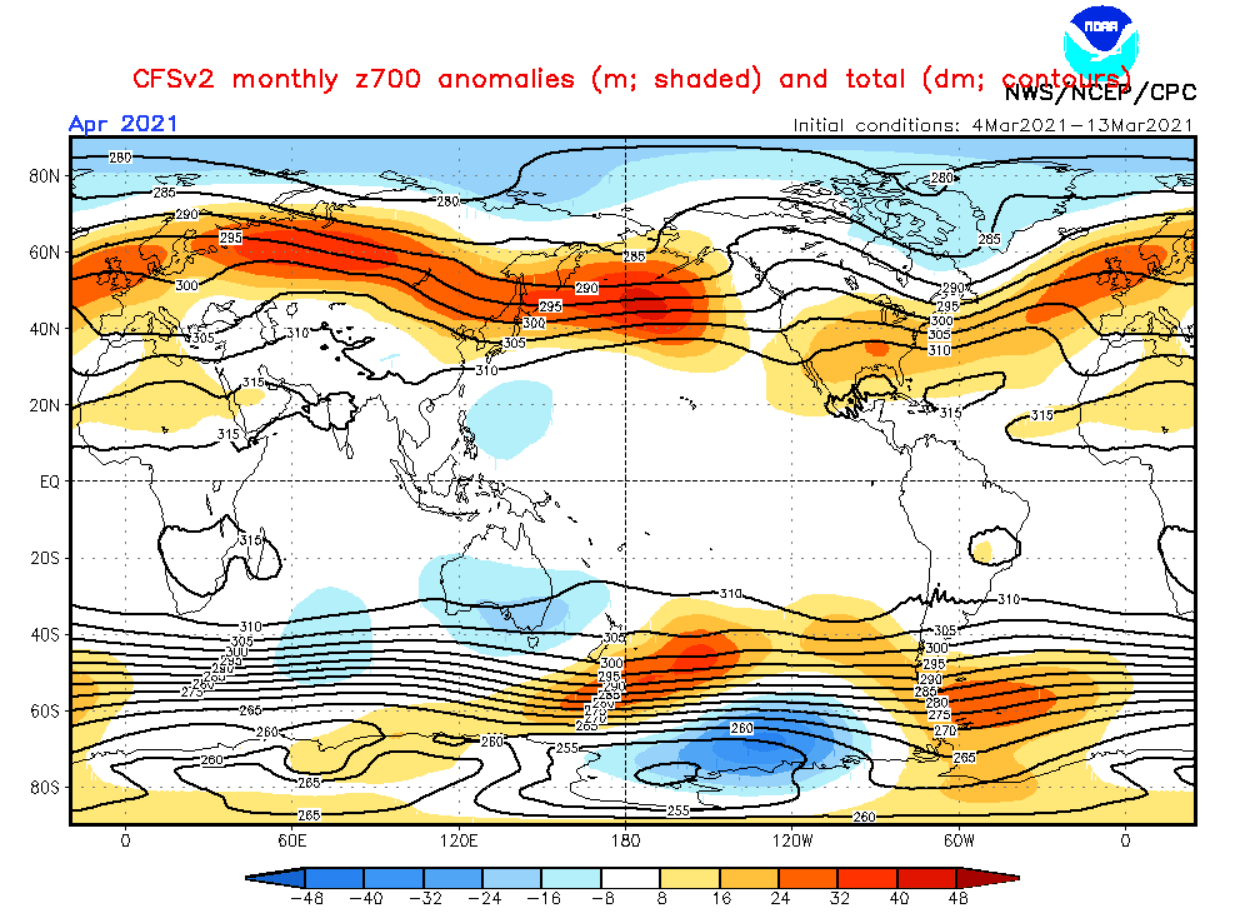 The prevailing positive mode means cold air is locked up in the Polar regions, with fewer cold outbreaks than normal. But with strong high-pressure anomalies over northwestern Europe and the North Pacific, there can be exceptions.

As the temperature forecast below shows, there is no strong warm air anomaly over Europe. That is due to the high-pressure area over northwestern Europe, which can pump cooler air from the north and east down on its eastern side, as it spins clockwise. We do see positive temperature anomalies over central Europe, but much of Europe is around normal temperatures, except Scandinavia and towards Russia. 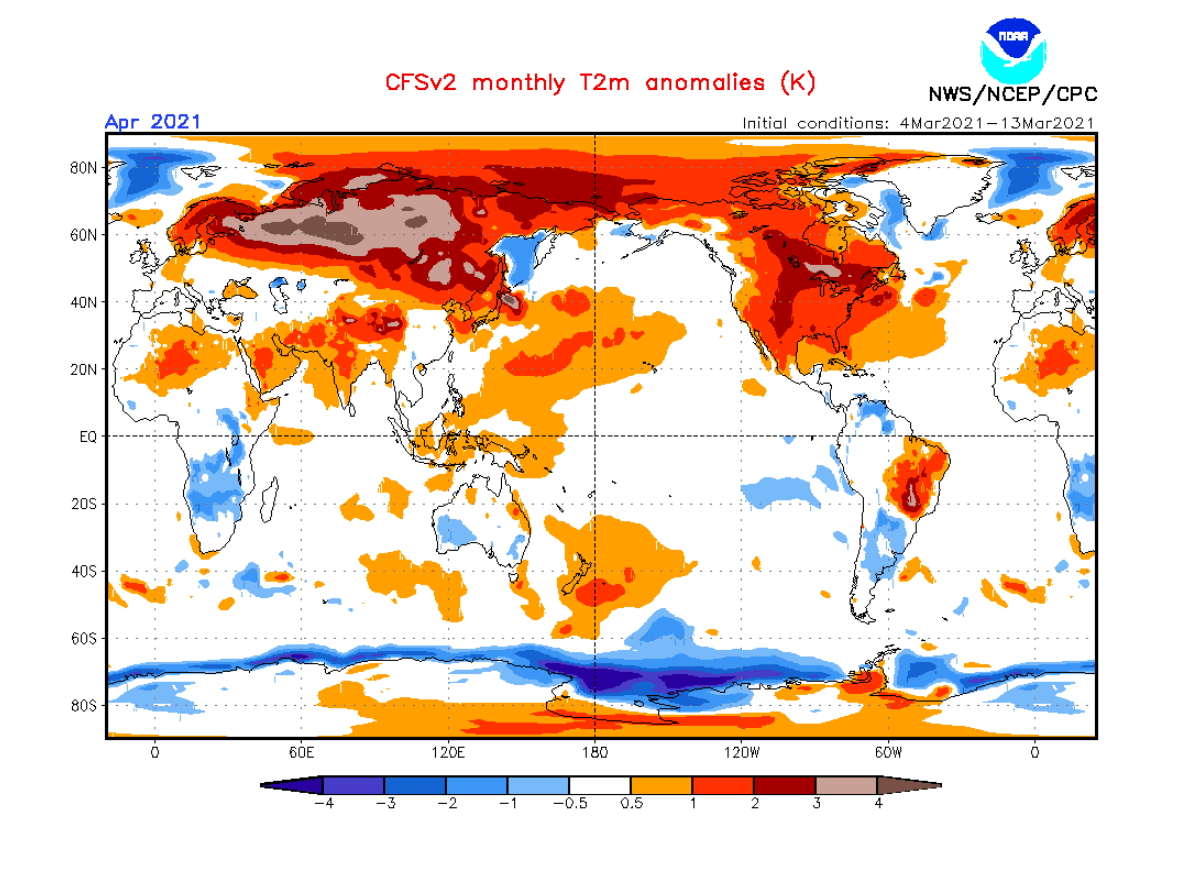 We will keep you updated as fresh data is available, and more reliable forecasts are released for the coming weeks. So make sure to bookmark our page, and activate the “show more” button on this article if you are reading us from the Google Discover feed.