It’s been a while since there were serious North Atlantic storms ongoing. Today, two deep and rapidly intensifying storms are underway, one is nearing the Faroe Islands tonight, while a large one is on its way for Ireland and the UK through Thursday.

The North Atlantic is now turning into a more progressive pattern this week, thanks to the NAO index turning into a positive phase. There are two intense extratropical storms ongoing, both with rapid intensification underway. Violent wind gusts and major waves will gradually spread into western and northwestern Europe over the next two days.

Below is an animation of both rapidly developing systems today, with a textbook formation of the cyclonic structure. A good eye could see how they are connected together, with a frontal boundary extending between both storms. The animation is provided by the Icelandic meteorological office Vedur.

Thanks to the NAO staying in a positive phase through mid-March, the activity over the North Atlantic will continue over the weekend and possibly into the next week as well. With additional extratropical storms likely to form.

What most often has an effect on a greater extent in Europe – most noticeably in the autumn and winter months, are the different phases of the North Atlantic Oscillation (NAO). The NAO index is used to represent the surface sea-level pressure difference between the Subtropical (Azores) High and the Subpolar Low.

As we can see from the chart above, the Positive NAO index phase is indicative of a stronger than usual subtropical high pressure and a deeper than normal surface pressure further north – an Icelandic low. The increased pressure difference between the two large-scale features results in more and stronger winter storms crossing the North Atlantic Ocean, often reaching western and northwestern Europe.

While the negative NAO index is the opposite. It normally brings fewer storms than normal over the North Atlantic, but wetter conditions across the southern portions of Europe. When the NAO index is negative, the Icelandic low and the Azores High are both weaker.

RAPID INTENSIFICATION OF BOTH STORMS

The satellite image over the North Atlantic reveals that both systems are very well-organized, both having a typical appearance of rapid strengthening and a classic comma cloud structure. The western, larger system, might be developing a so-called ‘sting jet’ wind maximum. 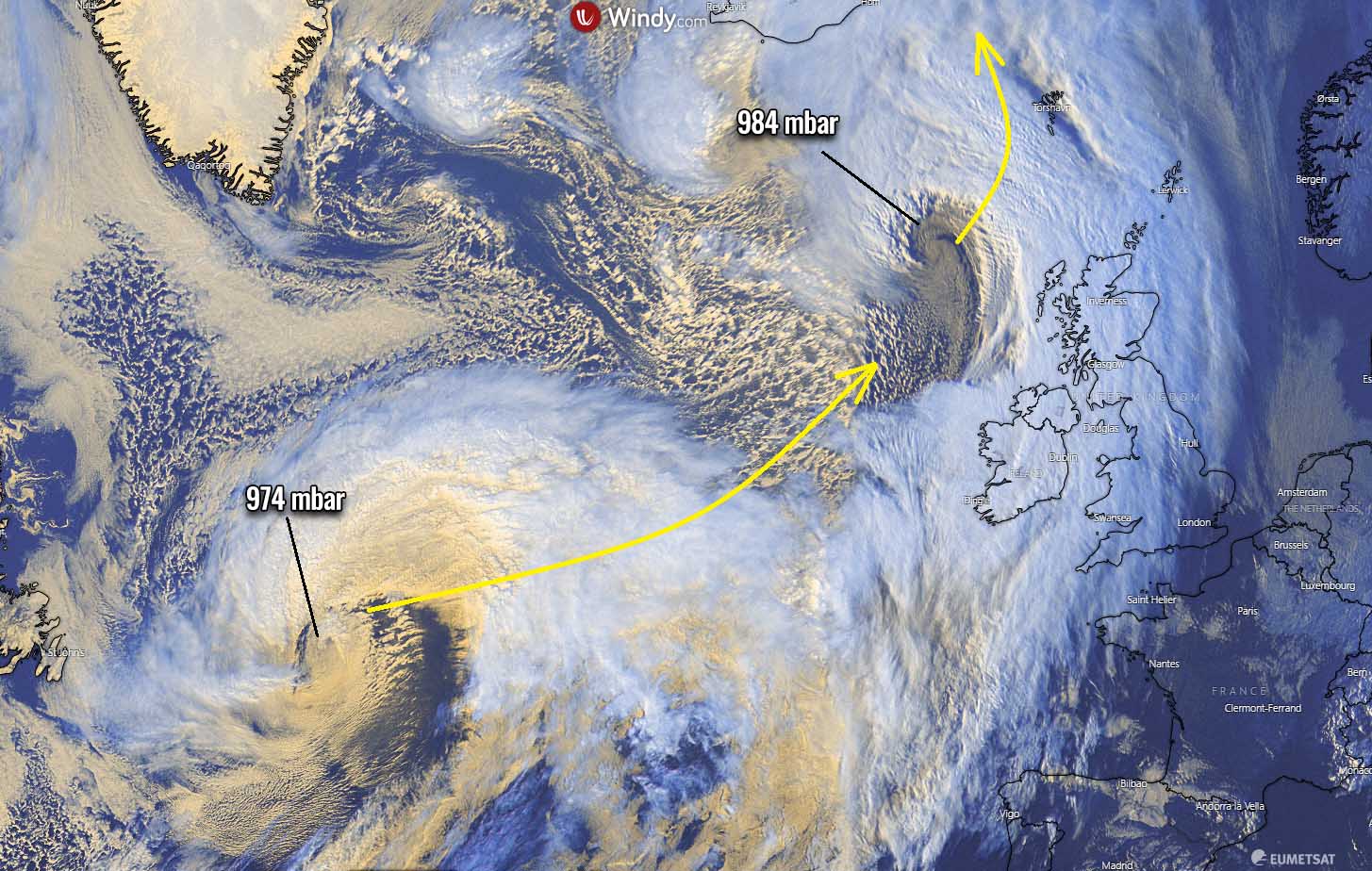 Below are the estimated surface analysis data for the mean sea-level pressure by the NOAA Ocean Prediction Center (OPC).

The extratropical storm was born in the central North Atlantic on Tuesday, soon getting into a rapid intensification mode and exploding its intensity while heading towards the Faroe Islands today. Violent sea waves are being generated while close-up satellite imagery reveals an impressive, textbook structure of the storm.

Although the pressure data doesn’t show more than 22 mbar change over the last 24 hours, the past 12 hours have taken a higher gear. The pressure drop from midnight to noon today (12 hours) was 13 mbar, so the system is in rapid intensification mode now.

Based on the global models and the OPC forecast, it will deepen into low 950s mbar, so another 25-30 mbar over the next 24 hours. Its center will travel to the immediate west of the Faroe Islands tonight through Wednesday morning. Winds will be severe with locally hurricane-force gusts over the Faroes. 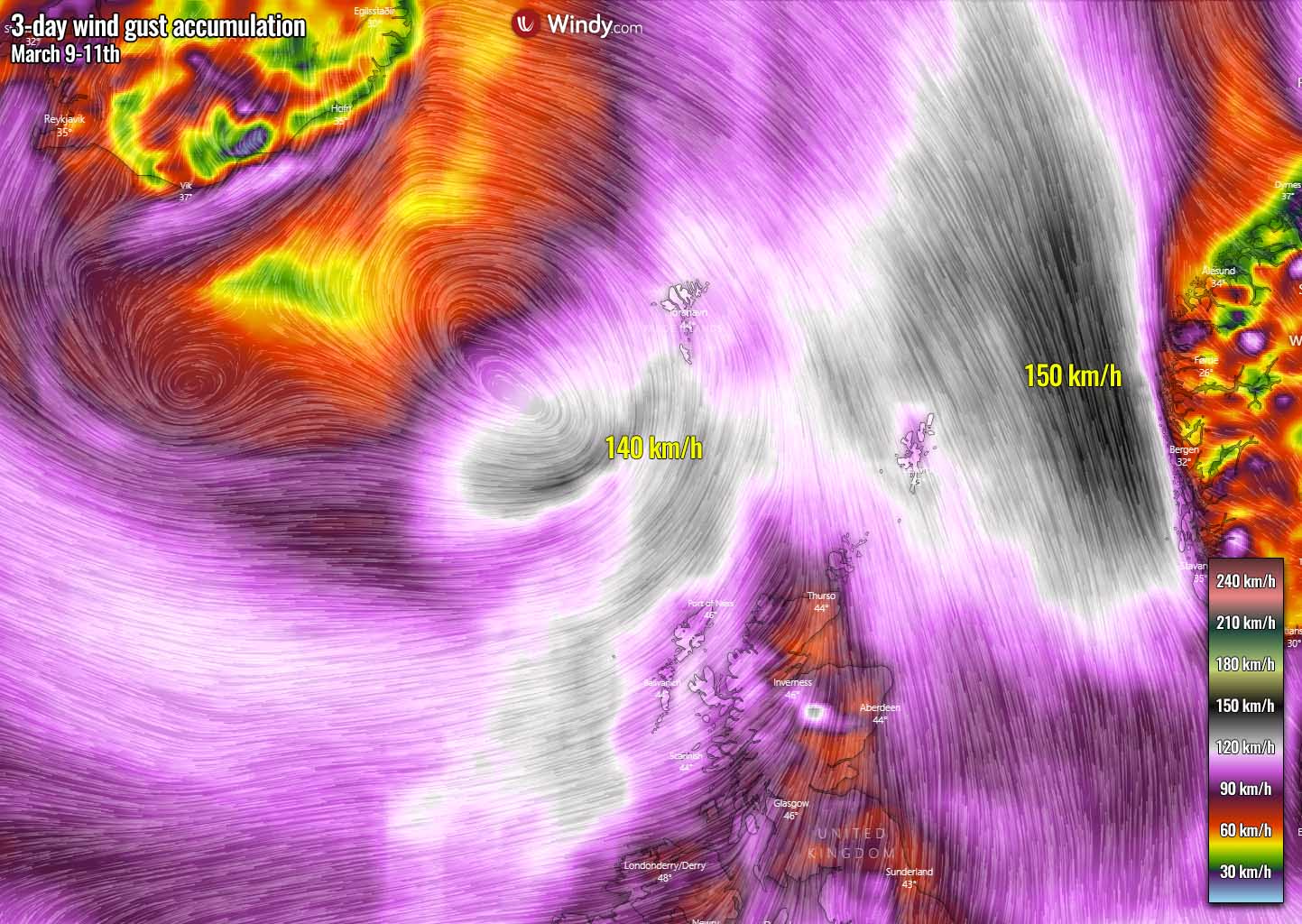 As we can see from the pressure analysis chart below, the second low further west is taking almost the same trajectory and is turning towards the UK and Ireland. It also has violent, hurricane-force winds developed while it continues rapidly intensifying. Its central pressure has dropped for at least 26 mbar since yesterday, so beyond the threshold for explosive cyclogenesis.

The system has developed from the upper wave ejecting off the eastern United States trough, associated with the cold blast across the Northeast portions of the country. By Tuesday morning, the system has already taken a rapid intensification phase and turned towards Europe.

It is quite possible that a sting jet* is being generated tonight, given the explosive development of the intense low. High-resolution weather models are hinting up at around 190 km/h are possible over the open North Atlantic there. The attached map covers the wind gusts accumulation over the next three days, where we can see the wind swath with 130-150 km/h reaching southwestern Ireland and England as well. 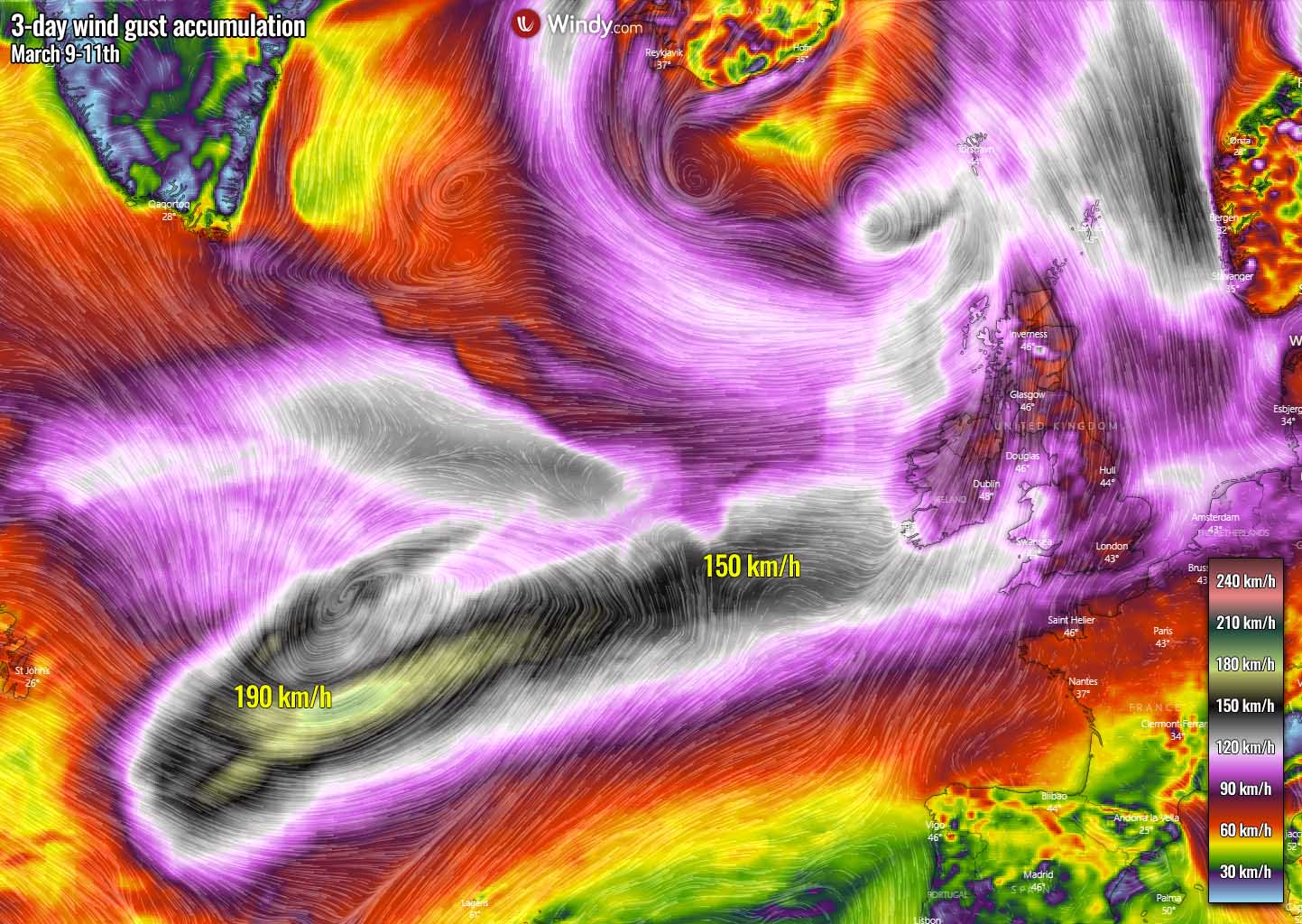 A rapidly deepening central pressure and violent wind field normally generate huge waves. Those are expected to be higher than 15 meters tonight through most of Wednesday while the system will be tracking further northeast towards western Europe.

These waves will gradually become lower when reaching Ireland but will remain close to 10-12 meters when arriving at the southwestern coast of Ireland and southwest England into Thursday morning.

LOTS OF RAIN LIKELY, DEEP SNOW FOR NORWAY AND ICELAND

Western and northern Europe both experience a higher amount of rain when a positive NAO phase occurs. That is because the zonal winds are stronger from the west, delivering higher moisture from the North Atlantic and especially as the flow usually persists for days.

There will likely be 50-150 mm precipitation in some areas over the next 5-7 days, across the UK, Ireland, Wales, and also towards Scandinavia.

While the troughs remain very deep and the environment rather cold, conditions will be also quite favorable for snowfall to occur. Some good amount of fresh snow will be likely across the Scottish Highlands, 20-40 cm seems possible until Monday. High moisture transport into Scandinavia will dump additional snow into southwestern Norway, with 50-80 cm of fresh snow possible.

A special concern is also the northern half of Iceland where extreme amounts of snow are expected. While the deep storms travel across the North Atlantic between western Europe and Iceland, the flow over Iceland remains north-northeasterly and cold. This means a persistent and heavy snowfall will develop across the northern half of the country. 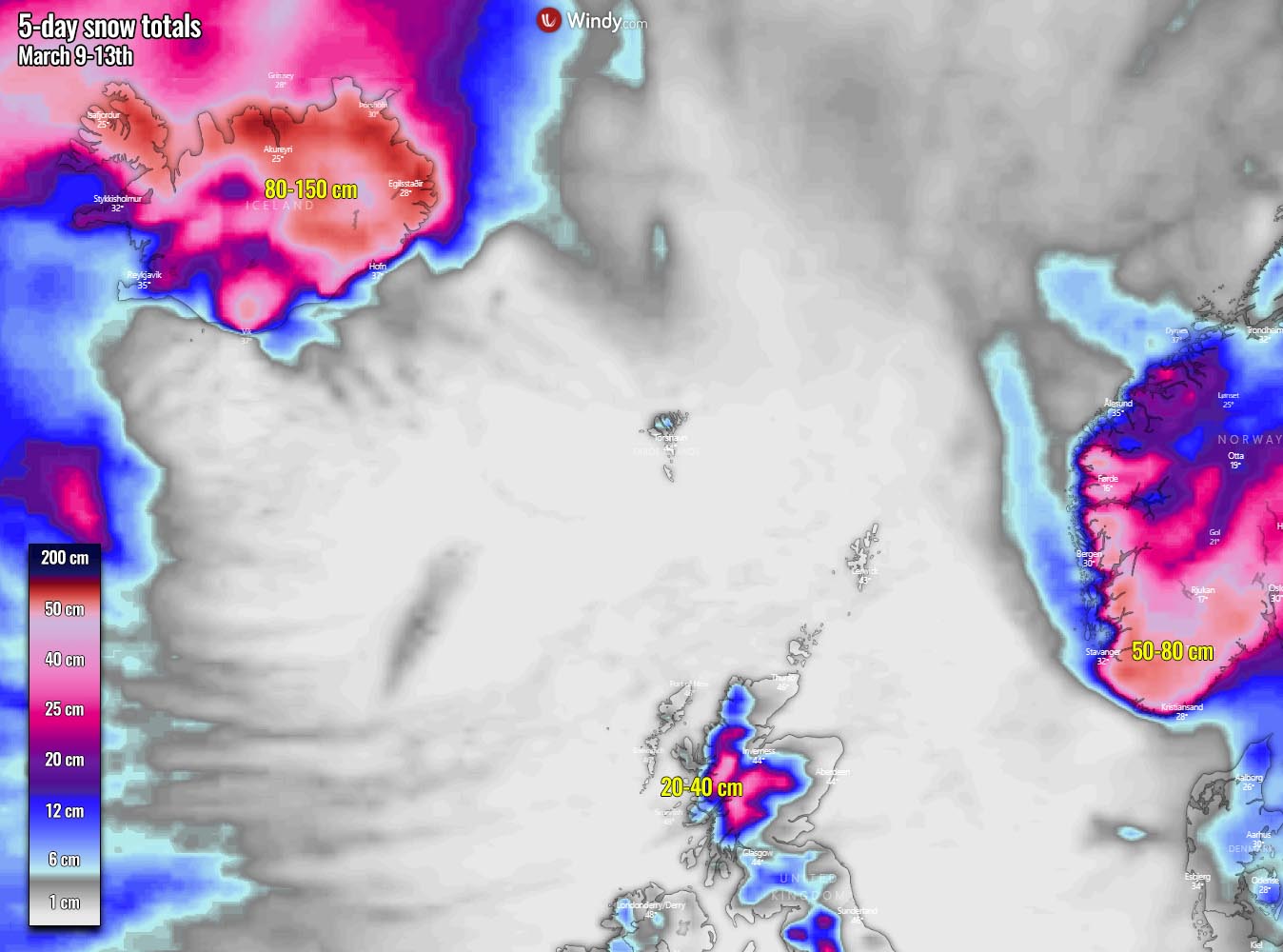 Both the global models GFS, ECMWF, and the High-Resolution models are hinting at locally more than 100 cm of fresh snow over the next five days. This could enhance avalanche threat into the fjord valleys across the northern and eastern portions of Iceland.

***The images used in this article were provided by NOAA, Wxcharts, and Windy.

Iceland is also being under a threat for volcanic eruptions lately, see details:

Earthquake swarm in Iceland continues, now with over 20.000 earthquakes detected since the start, facing an even higher eruption risk in the next few days