There is a substantial amount of Sahara desert Dust forecast to spread Europe Sunday this weekend, extending into Monday. Large plumes of dust particles collecting over Algeria and turning north into the western Mediterranean and are on their way towards western Europe, reaching as far north as southern Scandinavia over the next two days. At the same time, a warm wave with spring-like weather develops over Europe through the remainder of February.

Basically, this means the pattern change happening now turns the flow to bring the air mass directly from the Sahara desert. And it normally raises the potential to receive Sahara Dust particles across the European continent.

This weekend, we are expecting a significant advection of Sahara Dust into the Mediterranean region and towards Western Europe. The dust is then expected to spread towards western Europe and continue up to Scandinavia. It will significantly affect air quality in Spain, France, and possibly the UK and Benelux countries through Monday. 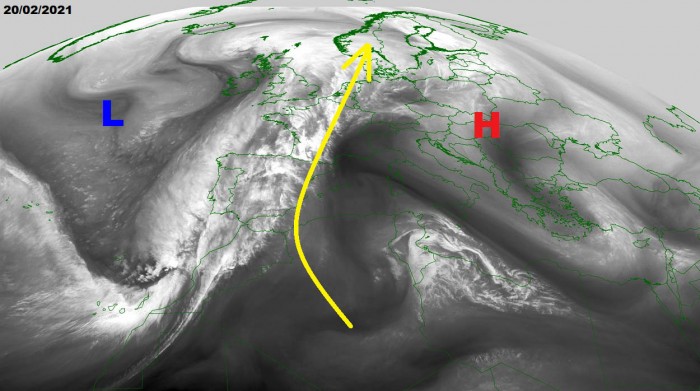 Let us remember early February this year when there was a huge amount of Sahara Dust advected across the Mediterranean into central Europe. Very high dust concentrations have turned skies and snow to orange across southern and central parts of Europe, creating an apocalyptic scenery.

Such a pattern also means a different weather picture across Europe than we had lately. After the prolonged period of very cold winter weather and snow over the past few weeks, warmer relief is coming up. A very warm period is expected after Sunday, likely lasting through the rest of February. Attached below is the video animation of the much warmer air mass coming up across Europe this week.

This will bring spring-like weather for many, with afternoon temperatures approaching +20 °C or even exceeding it locally. While the weather models are also hinting at the extension of this warm wave pattern into early March.

The pattern has begun its change this Friday, with the strengthening of the ridge and rising surface pressure over continental Europe. At the same time, the deepening troughs are establishing over the North Atlantic, with a southerly jet stream in between.

This Saturday, these changes have brought attention to the ongoing activity over north Africa. The below NASA MODIS satellite image indicates the initial start of the Sahara Dust advection into the southwestern Mediterranean.

The dust is now gradually spreading into eastern Iberia (Spain), on its way farther north on Sunday into Monday. The favorable strong jet stream (marked with yellow arrow) will push the dust into western Europe, and also towards southern Scandinavia through Monday. 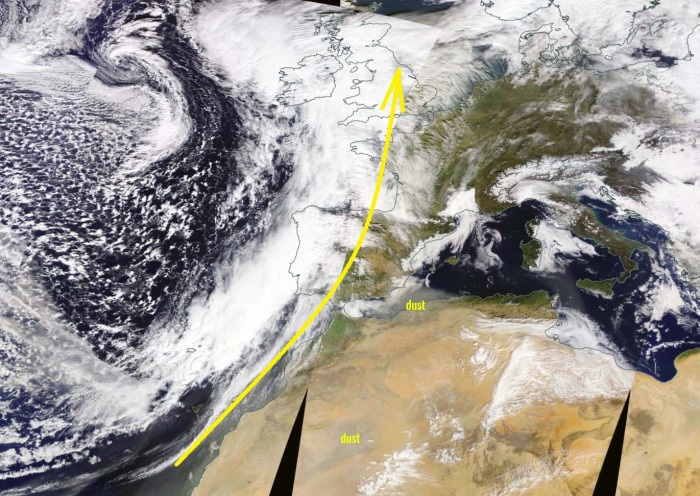 Notice also a well-defined frontal boundary extending from the deep low to the west of Ireland, curving south across the Bay of Biscay into western Iberia towards the Canary Islands. With the help of strengthening high-pressure system further east (see the low cloudiness across the northern Mediterranean), the prevailing flow turns southerly.

The general weather pattern across Europe is changing quite fast this weekend and will continue into the coming final week of February. Strong south-southwesterly winds have developed between the European ridge and the North Atlantic deep trough and will be persisting for a few days.

This will help the advection of Sahara Dust further north across the continent. As we could see from the 250 mbar (jet stream) chart below, the dust will travel from the Sahara desert to the Iberian peninsula and the western Mediterranean first, then turning north-northeast across western and central towards northern Europe. 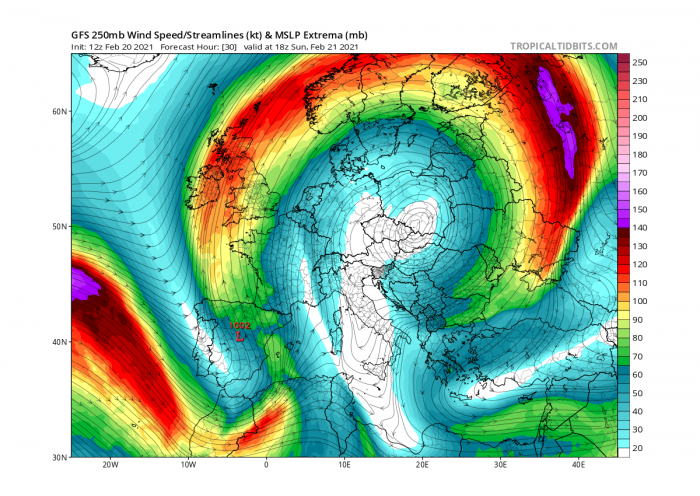 The highest concentrations of the Sahara Dust will first spread into Spain and western France on Sunday. Possibly also extend across the English Channel into southern England by the afternoon/evening hours.

Part of the huge and dense dust clouds over Algeria and Tunisia will also spread into the southern Mediterranean tomorrow, probably reaching the southern portions of Sardinia island, Italy as well. 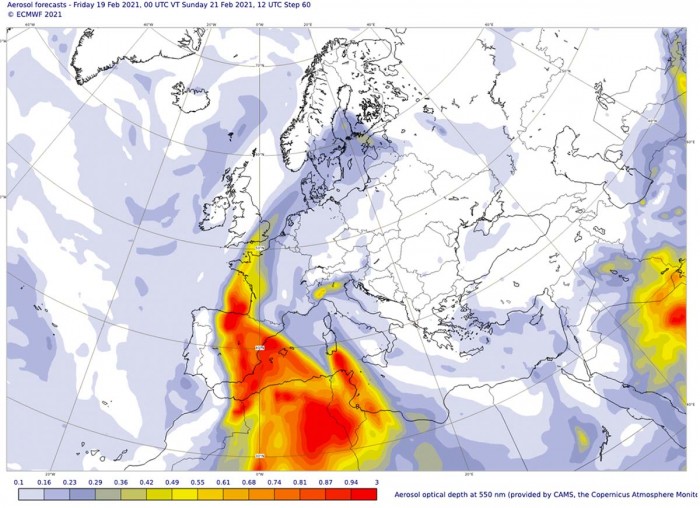 The Copernicus Atmosphere Monitoring Service (CAMS), warns that high concentrations of dust can have health impacts on the respiratory systems of all people in the affected regions and add to particulate matter air pollution from local sources.

Given the number of dust particles being quite significant again this time, it could lead to skies turning red/orange with limited visibility and dust deposits on the cars and other objects outside.

Note: Sahara Dust comes from the Sahara desert. When the winds in the upper part of the atmosphere are blowing north or northeast, the dust particles can be carried far north into central Europe. Sometimes even into east, west or even north Europe.

When such an event occurs during a frontal system and therefore rain, the dust will be brought to the ground. Then, we can observe the dust deposited on objects. We notice a layer of dust, dusty drops on the car, etc.

Besides gaseous pollutants, the atmosphere can also be polluted by different particles. These particles (either in suspension, fluid, or in solid-state), have a divergent composition and size and are sometimes called aerosols.

They are often cataloged as ‘floating dust’ but are best known as PM particles. PM is an abbreviation for Particulate Matter. This floating dust is most often categorized based on its aerodynamic diameter.

Particulate matter such as PM10, PM2.5, PM1, and PM0.1 is defined as the fraction of particles with an aerodynamic diameter smaller than respectively 10, 2.5, 1, and 0.1 µm (for your information: 1 µm = 1 millionth of a meter or 1 thousandth of a millimeter).

In comparison, the average diameter of human hair equals 50-70 µm.

On Monday, the general weather pattern supports further southerly advection of the Sahara Dust towards the north. Quite significant dust concentrations seem likely to develop across France, Benelux, and far southeast England into the North Sea.

Part of the dust could also extend into southern Scandinavia, precisely into far southern Norway and Sweden. Dust deposits could also be seen there. 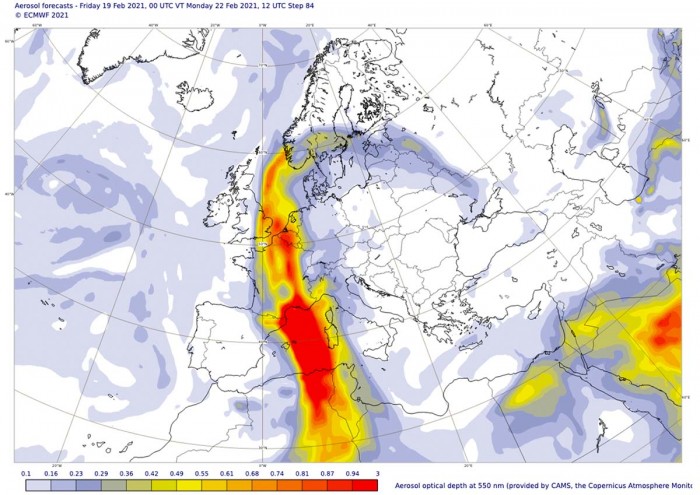 Notice how intense the dust cloud will be over the western Mediterranean on Monday. Also reaching southern France. Significant dust deposits are likely to be observed. If you encounter the dust, feel free to report us via our Facebook reporting group.

Further west, over the Iberia, the east shift of the jet stream will put the peninsula out of any significant dust amounts, so conditions will improve fast in the wake of surface front moving across Spain.

Although not always, such a pattern evolution seems quite typical to develop Sahara Dust advection towards Europe. With this dust storm event, ending on Tuesday, another feature of interest is also a very warm period developing across the European continent next week.

Coming up into the last week of February, much of the European continent will experience very warm weather. With the Sahara Dust ongoing on Sunday and Monday, the much warmer air mass also advects to its east. Becoming quite significant already on Monday. With more than 15 °C above normal temperatures across a large part of central Europe, extending to the Baltic region and southern Scandinavia. 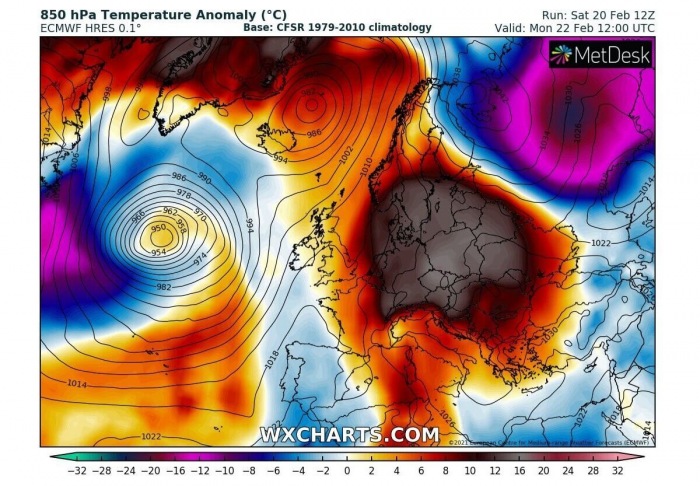 Further east, west-northwest Russia remains in extremely cold air mass, with temperatures close to 25 °C below average. This means daily temperatures will likely stay below -20 °C with nighttime temperatures dropping even below -35 °C in some areas. Those are actually the remnants of the continental Polar air mass we have been experiencing in the last weeks.

Below is a very impressive comparison of the ensemble GEFS model forecast for two places – Prague (Czech Republic) and Yurla (Russia). The first, Prague chart (bottom left) will be near the core of the warm wave while Yurla (bottom right) will be in the core of the extreme cold. The difference is remarkable. 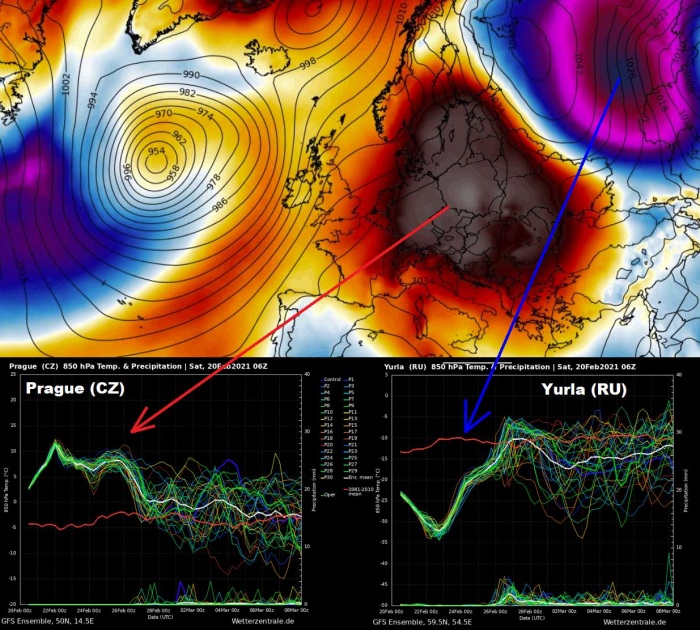 While Prague will experience 12-15 °C warmer weather than normal, Yurla will experience nearly 25 °C below normal temperatures. The actual temperature will be 15-18 °C in Prague through mid this week, while it will be around -35 °C in Yurla. So around 50 degrees Celsius difference between those two.

The warm wave period happens in response to the development of a very large and powerful upper-level ridge these days. The attached 500 mbar heights anomaly chart below is the forecast for Wednesday, with the ridge covering much of the continent. A deep trough can be seen over the North Atlantic further west. 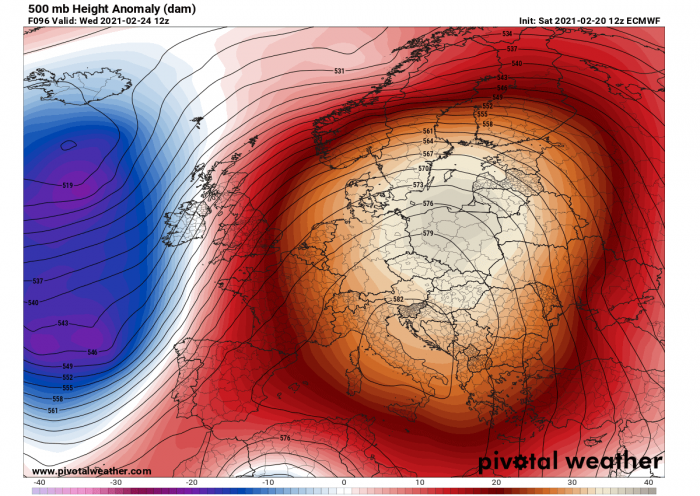 This is nothing else than much higher temperatures over the continent with daytime peaks near +20 °C, potentially even into the low 20s in some areas. The overall temperatures will be quite well-above the average for late February, even more than 10-12 degrees warmer than normal. Therefore giving a real early Spring feel for many experiencing those in the coming week. 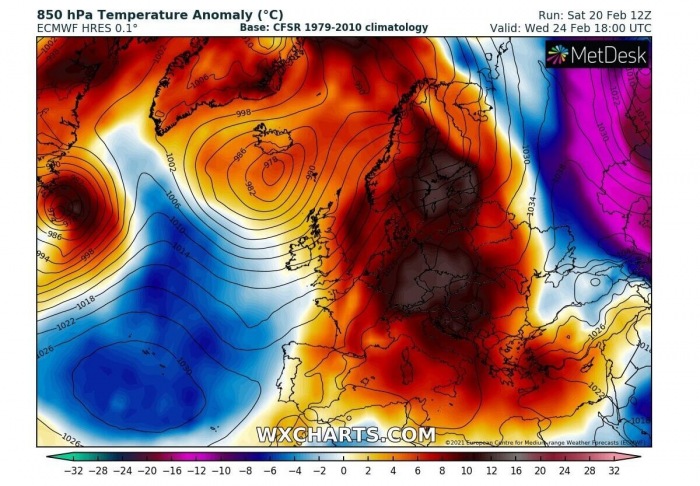 We can also see that the huge frigid cold pool over northwestern Russia finally weakens and moves further east-southeast. So, the temperatures are likely to rise there as well through mid-week. Thanks to the deep trough with lows over the North Atlantic, the advection of air mass from the south will bring warmer weather into Scandinavia as well. With temperatures close to 12 degrees C above the average over Scandinavia. 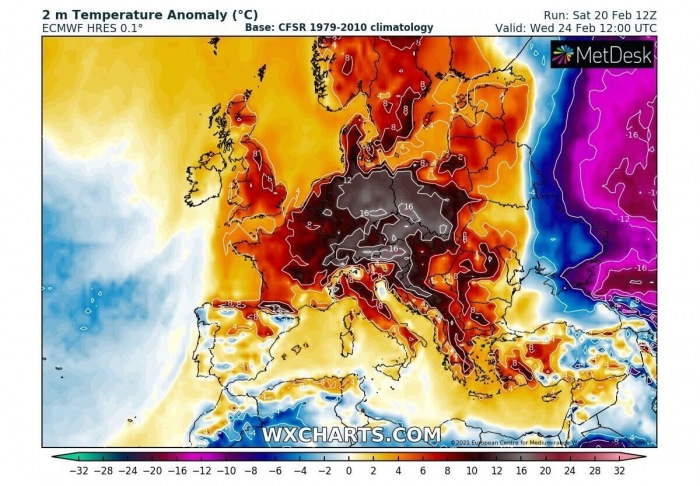 Then, weather models also hint that warm weather will extend into early March as the high-pressure seem to be dominating the European weather for more than a week. Trends are towards an extensive blocking ridge with a large high-pressure system across the south-central parts of the continent. With only disturbances remaining to the north of the ridge, from far North Atlantic moving towards northern Europe. 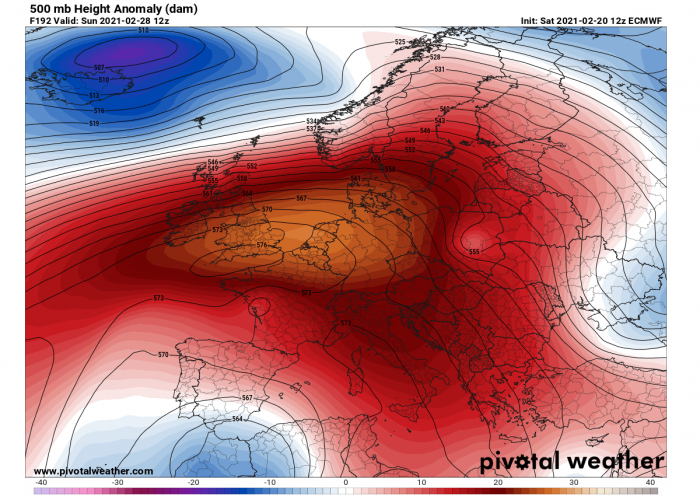 This should allow the early spring-like weather over a large part of Europe. But indeed it will strongly depend on the surface high-pressure systems allowing thermal inversions to build up. As some areas could be trapped in cooler, more dense air and therefore not allowing the temperatures to go very high in those valleys.

Such a pattern developing through the rest of February will also contribute to a below-normal amount of precipitation for a large part of Europe. Indeed as stable weather is expected under the ridge and high-pressure system. There will be some 50-100 mm of rainfall across the Iberian peninsula, Ireland, the UK, and western Scandinavia where fronts will bring unsettled conditions in the coming days. 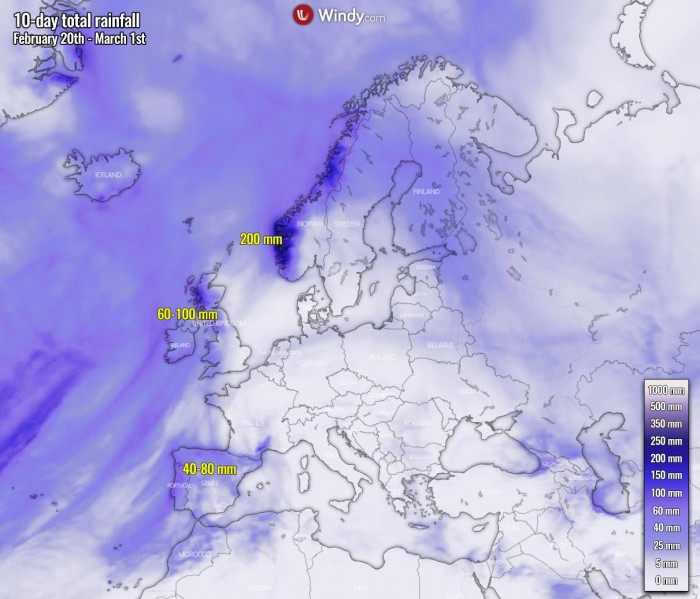 Similar events in the past:

Huge Saharan dust load over south-central Europe, also towards the UK and Ireland (May 14th, 2020)