As the worst of the coronavirus outbreak is not enough, a monster Tropical Cyclone Tauktae is impacting western India today. While passing just west of Maharashtra’s capital Mumbai this Monday morning, Tauktae heads for a destructive impact along the coast of Gujarat state tonight. Major, catastrophic flooding, storm surge, and damaging winds are expected.

As per the official tropical cyclone scale by India Meteorological Department (IMD), the Tauktae has been classified as an Extremely Severe Cyclonic Storm, meaning the maximum 3-min sustained winds are between 90 and 120 knots. But the system has not reached its peak yet, as the rapid intensification is underway while moving north. 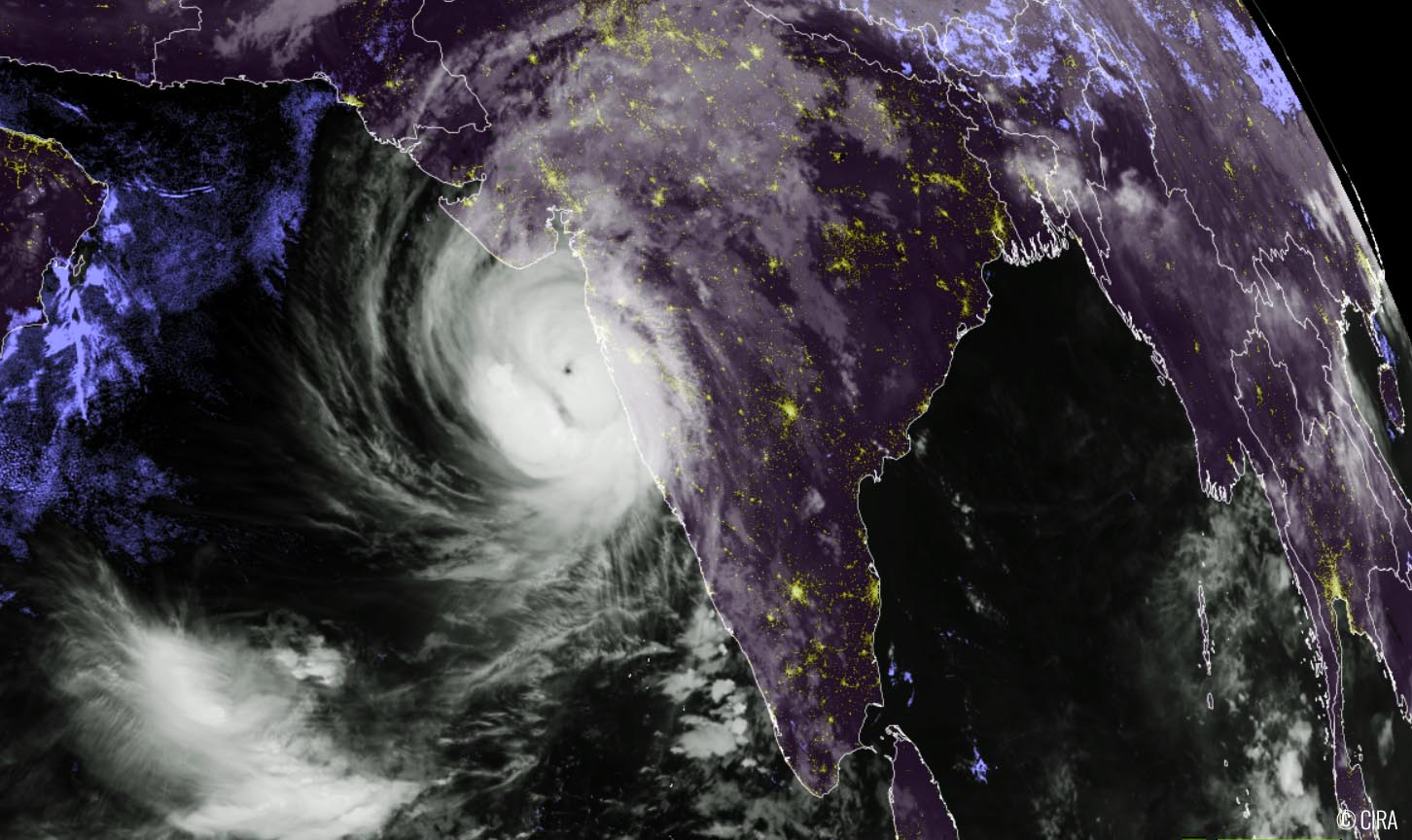 Sadly, at least 2 deaths and 1 injured person have already been reported after a tree falls on a hut in Maharashtra’s Jalgaon on Sunday.

This Monday morning, Tauktae was located approximately 80 miles south-southwest of Mumbai, India, and has been tracking north-northwestward at the speed of around 11 knots over the past six hours.

Tropical Cyclone Tauktae is the first Arabian Sea tropical storm of the 2021 season. The tropical season in this region has no specific period of occurrence but does have, however, two periods that normally see a higher number of tropical cyclones. The first peak is just now, from April to June and the second one is after the monsoon season from September to December.

According to the Advanced Dvorak Technique (ADT) analysis, reporting near 135 knots winds, the Tropical Cyclone Tauktae could have intensified into the highest level already. Tauktae is now likely a Super Cyclone Storm of a borderline Category 5 strength, passing uncomfortably close to the west coast of India. Super Cyclone Storm means the maximum sustained winds are above 120 knots. 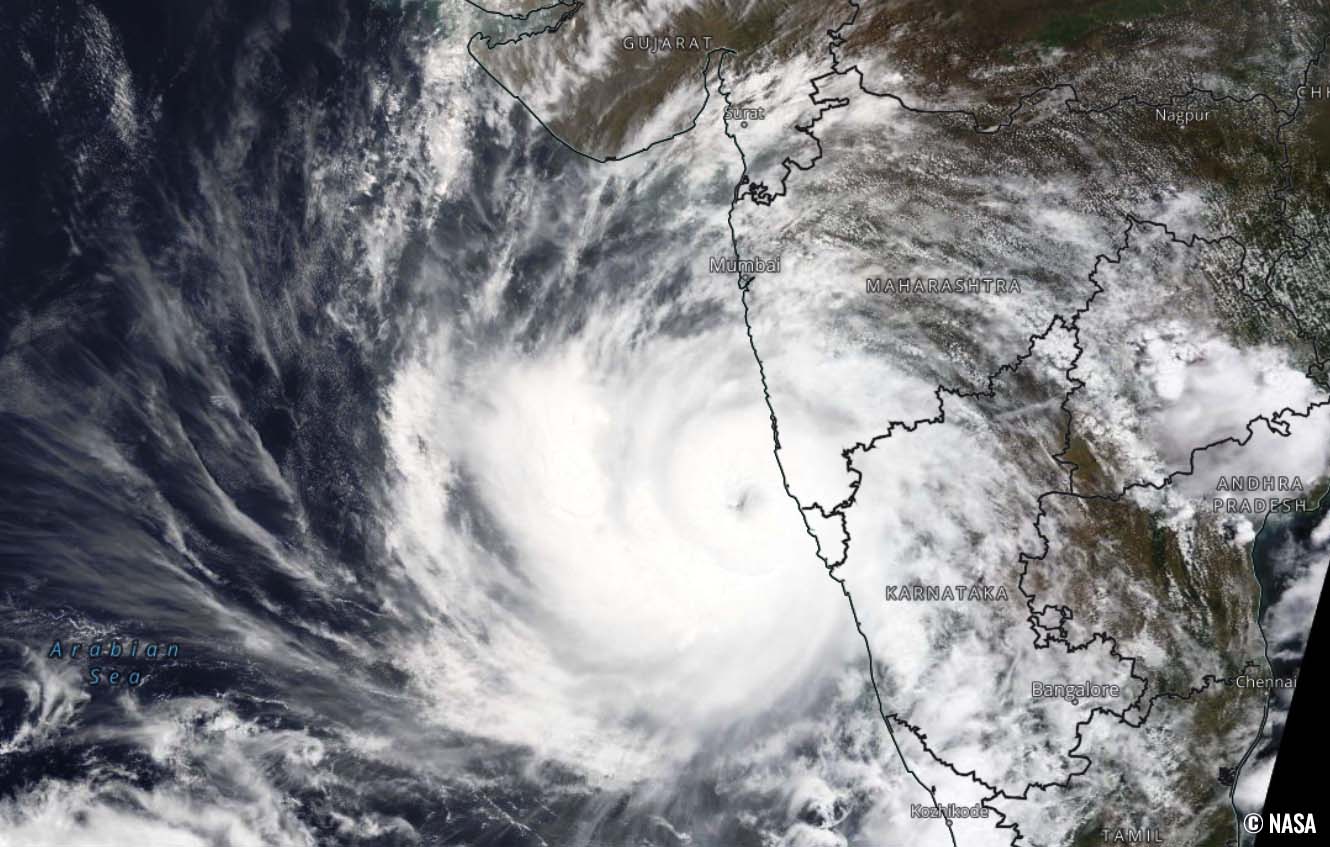 Although the strongest winds and most intense rains remain just offshore western India, tropical cyclone Tauktae makes its closest pass to the city of Mumbai, the capital of Maharashtra region, taking its impact this morning. But the worst is yet to come further north later today into tomorrow.

The India Meteorological Department is predicting that the tropical cyclone Tauktae will make landfall tonight, May 17th along the coast of Gujarat with a massive storm surge, heavy rains, and flooding onshore to the east of the storm’s center.

The worst impact by this storm will be a huge amount of flooding rains, flooding by high storm surge severe damaging winds. It appears likely that the storm’s worst hit will be the city of Ahmedabad, with a population of more than 5 million people, coming on the system’s track soon after the landfall.

Tropical Cyclone Tauktae is very likely to intensify even further today until it makes a catastrophic landfall over the next 24 hours. The latest model guidance suggests the storm will likely cross the Gujarat coast between Porbandar and Mahuva (the Bhavnagar district), northwest India tonight into early morning tomorrow, May 18th.

The storm surge could exceed 3-4 meters (10-15 feet), and it seems that the worst coastal flooding may not affect highly populated areas as the center of Tauktae will pass in between.

Once the tropical cyclone Tauktae makes landfall, its heavy and excessive rain swath will spread further inland with additional flooding threat. Eventually, heavy rains and flooding threats could also make it all the way northeastward towards the city of New Delhi.

The latest Advanced Dvorak Technique (ADT) analysis calls for an impressive and very concerning intensity of the Tauktae. Based on the latest satellite scans, the central pressure has dropped to around 925 mbar with destructive winds of maximum speeds up to 135 knots. That is equivalent to nearly a Category 5 hurricane!

The Final T number has been set to 6.3, while it was even slightly higher in recent hours. While the storm might not yet be reaching its peak, as rapid intensification continues. The strength of Tauktae has significantly increased on Sunday, with winds going from around 90 knots to nearly 140 knots this Monday morning.

As we can see from the chart above, the maximum sustained winds of 64-knots are spread across 50-60 miles (90 km) radii around the center and are just touching the western coast of India. Precisely across the Mumbai area in the Maharashtra region. Tropical-storm-force winds are spread even farther away, up to 100 miles (150 km/h) radius from the storm’s center.

Tauktae has become quite a large cyclone after its birth on Saturday, revealing an impressive cyclonic structure this last Saturday. Very deep convective storms around the clearing eye have pointed out to a healthy storm which undergoing rapid intensification and building eyewall. 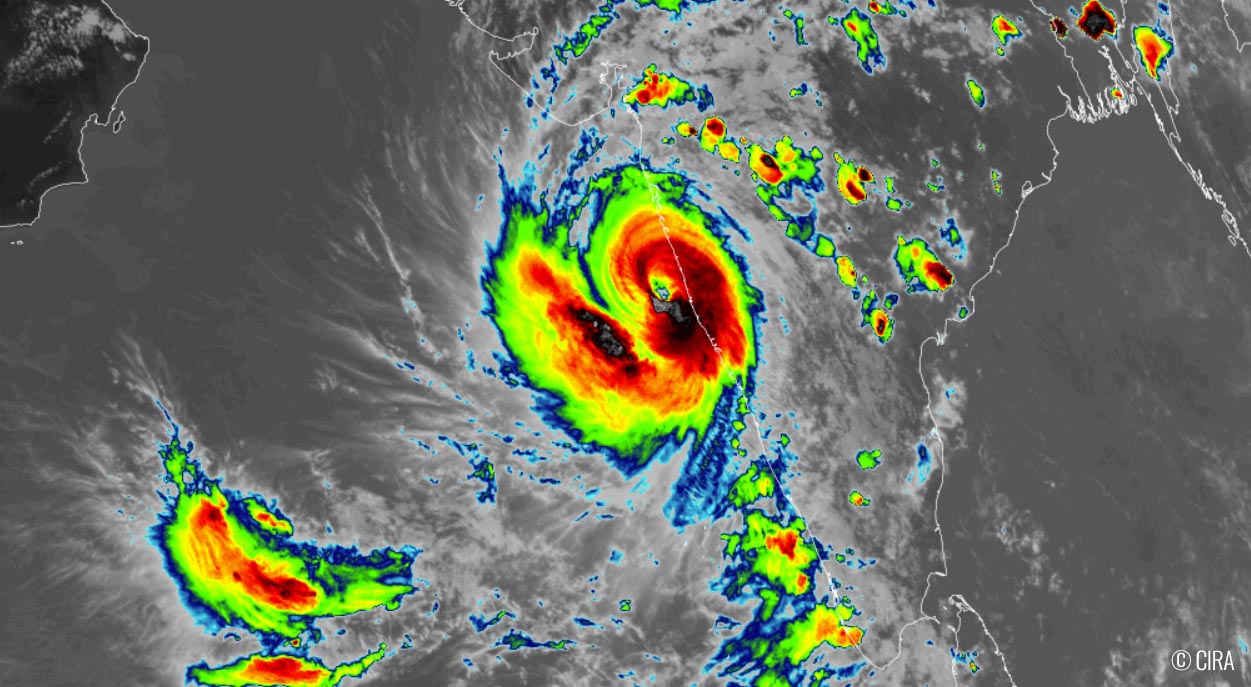 The enhanced infrared satellite imagery reveals that the tropical cyclone has become more symmetrical and compact with convective bands wrapped tighter into the central convection. This convection has maintained a well-developed, sharply outlined 10 miles wide eye. 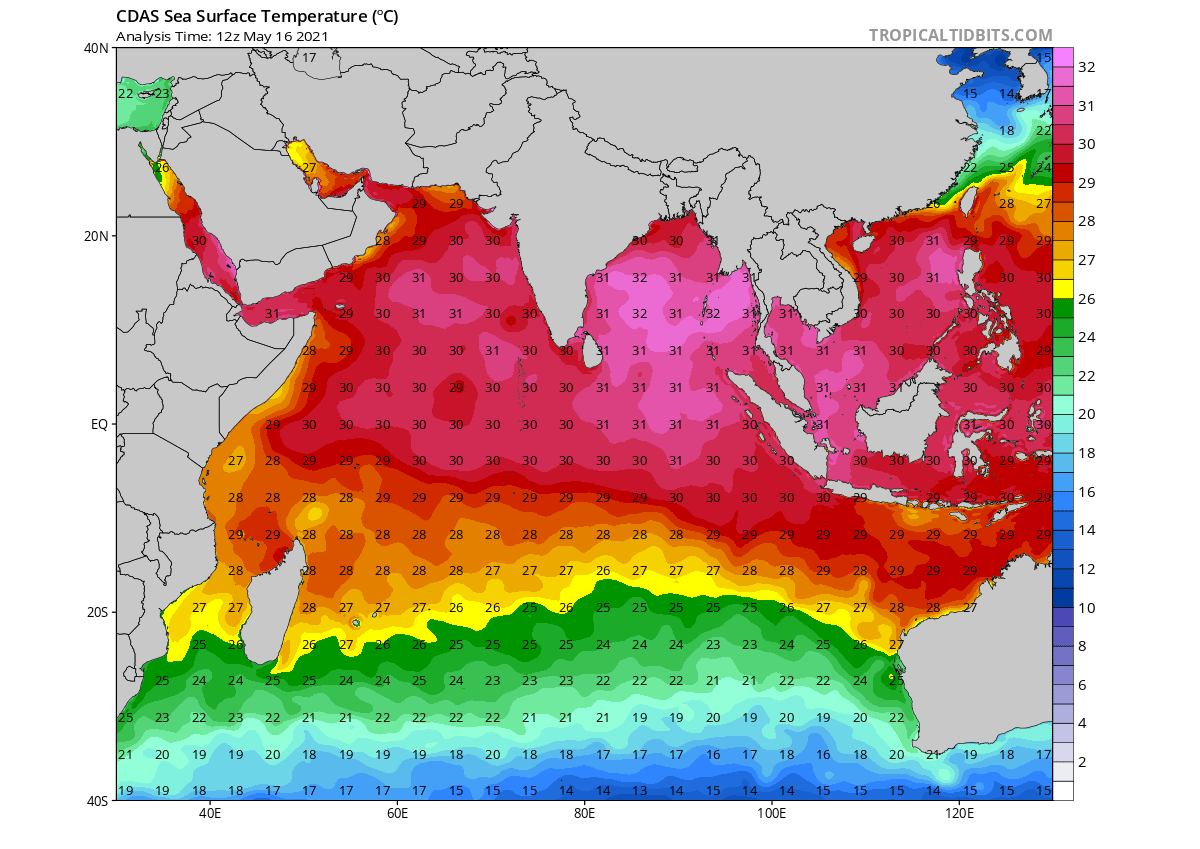 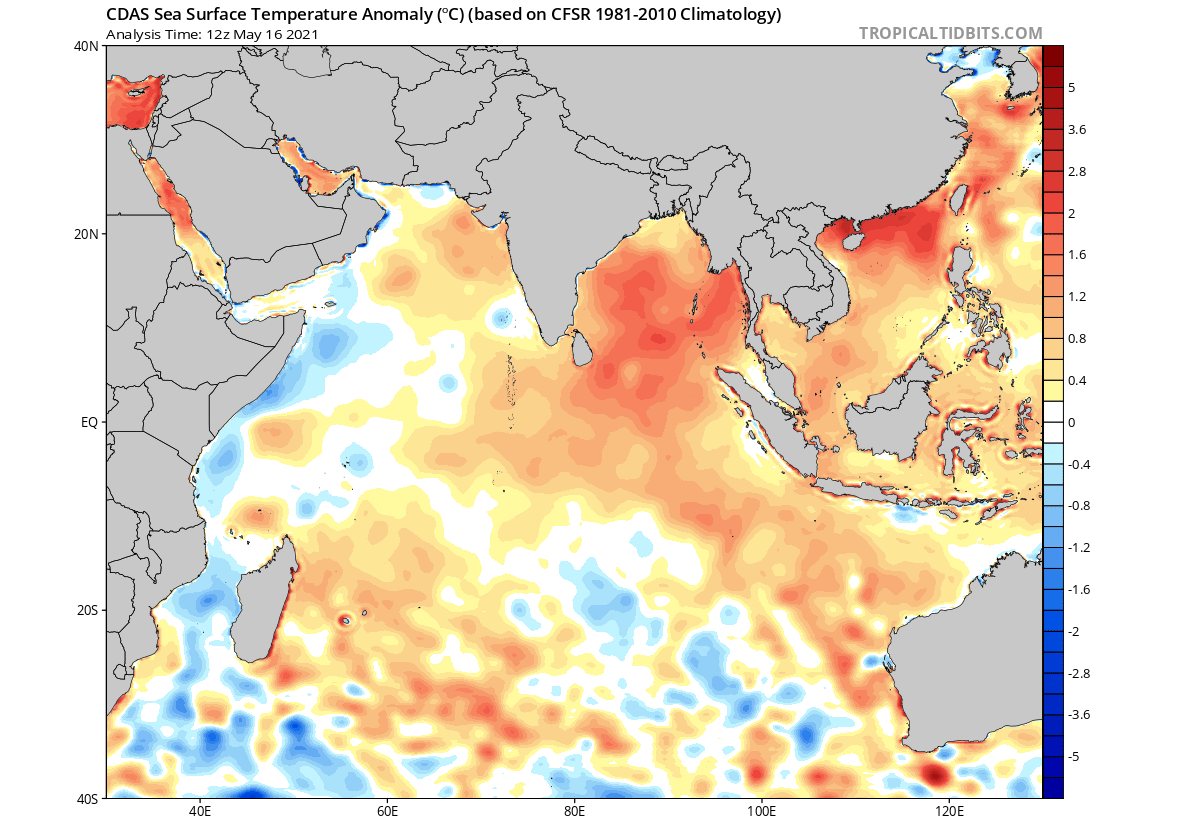 Basically, if we take a closer look, the overall Indian Ocean has mostly above normal sea temperatures recently. In other words, this means that frontal systems or tropical cyclones have more energy available to feed the storms and become more violent and destructive.

While the Tropical Cyclone Tauktae is passing due north, about 200-300 km west of Mumbai, the conditions in the densely populated Mumbai area (about 20 million people in the metro area) will likely bring power outages, downed trees down due to sustained winds near the hurricane force.

Moreover, more than 60 million people are expected to be within the swath of tropical-storm-force winds, and especially potentially catastrophic storm surge near and to the right of the landfall point along the coast of Gujarat state. Just something India surely doesn’t need during the ongoing outbreak of the coronavirus pandemic at this moment.

Tropical Cyclone Tauktae could bring a large swath of 200-300 mm (8-15 inches) of total rainfall along its path over the next 3-5 days. With a combination of high storm surge around 3-4 meters, catastrophic flooding along the coastal areas is possible. Along with the mudslides as land is already soaked from the recent excessive rains. 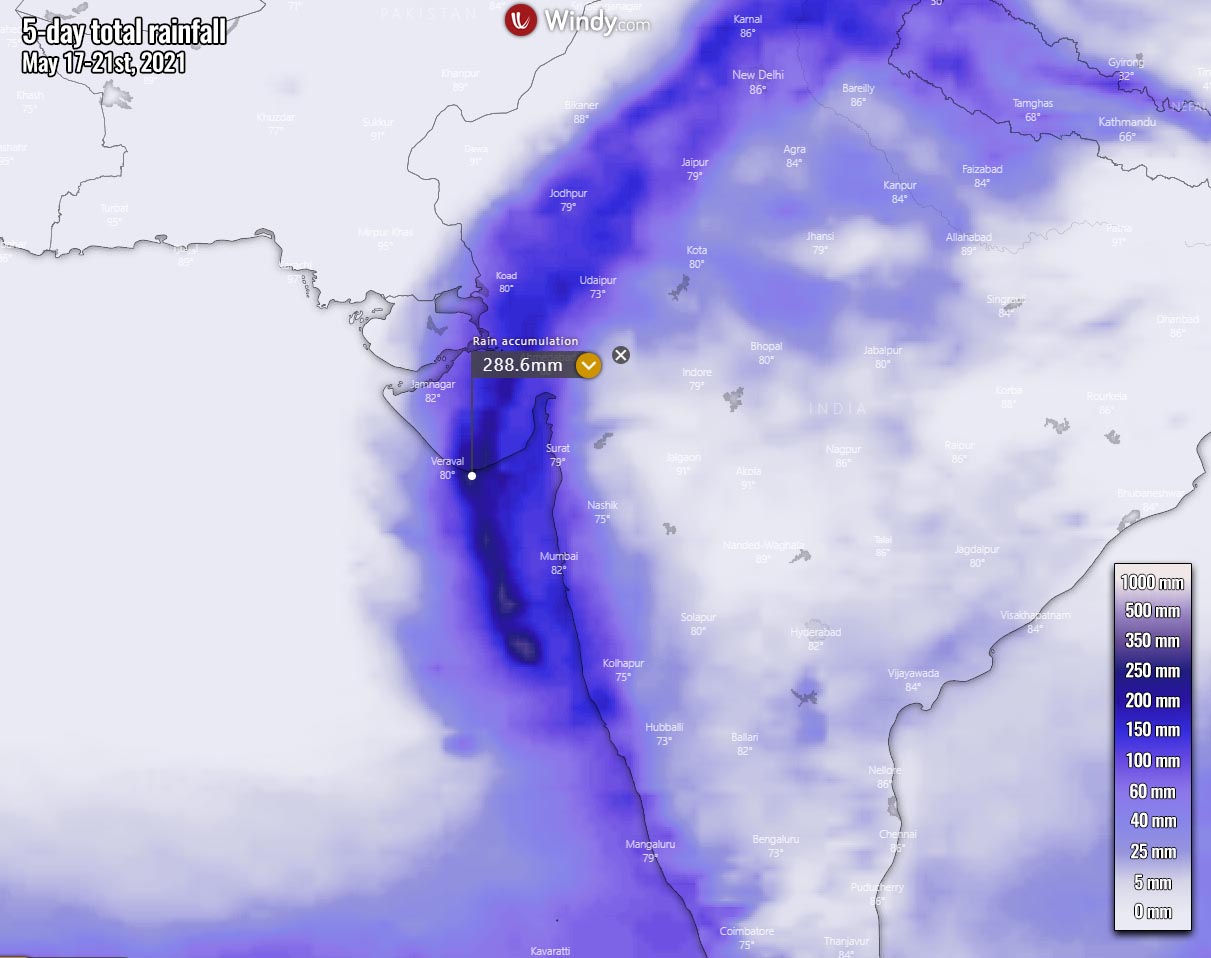 The wind swath of this large storm is also pretty wide, grazing the western coast of India, and will be damaging along the coast of Gujarat where landfall is expected tonight into Tuesday morning. While the worst might stay just to the south of the Gujarat coast, the impact of the cyclone will be significant.

Peak gusts 150-180 km/h will be possible to the east of the landfall point, even more just to the south of the coast. Weather models are pointing at around 200 km/h peak wind gusts there. Nevertheless, these winds will be destructive for the coastal region of Gujarat state. 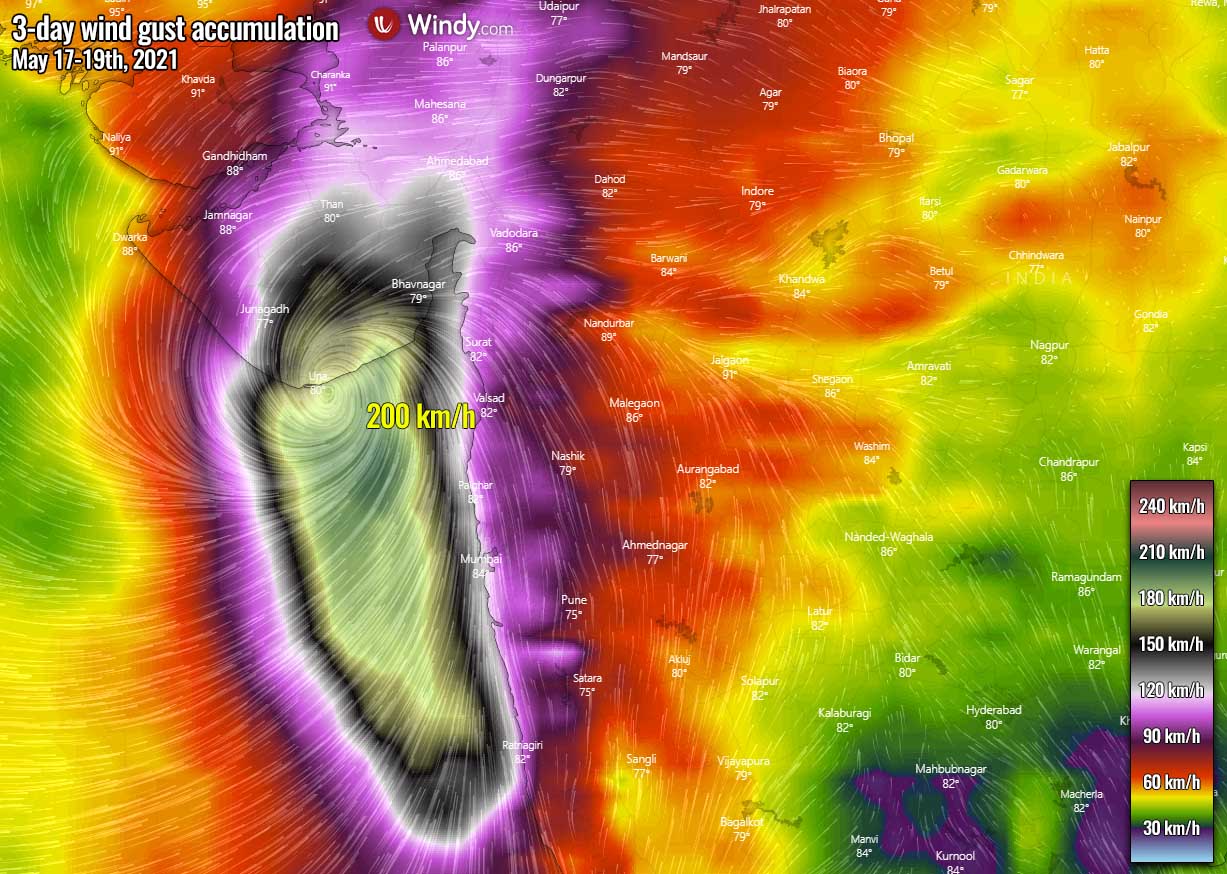 The worst impact across the southern portions of Gujarat will be widespread power outages that could last for several days.

While Tauktae approaches Gujarat today, it will track more northward and round the ridge axis before making landfall near Jafarabad, India tonight. During the landfall, the system is expected to decrease in strength as it tracks north due to terrain interaction and slightly cooler sea surface temperatures along the Gujarat shores.

After the landfall, the cyclone Tauktae will rapidly erode as it tracks across the rugged terrain, leading to dissipation about 48 hours afterward. And could eventually also bring heavy rains with flooding up to New Delhi as well.

A Category 5 Super Typhoon Surigae peaks at 190 mph and 888 mbar, becoming the most intense April tropical cyclone on record, heads further northwest across the Philippine Sea