The Atlantic Ocean is one of the key global areas, that greatly affects the weather and climate in the United States and Europe. In the past weeks, warmer than normal ocean waters were detected in the subtropical North Atlantic ocean, which is known historically to have an important connection to the Atlantic hurricane season.

Global weather is in a constant flow, connected through space and time. Using satellites, we can track the motion of clouds and pressure systems around the world. All of this motion is caused by pressure changes and winds, which play a crucial role in the connection between the oceans and the atmosphere.

Trade winds are the prevailing easterly winds that circle the Earth near the equator. They are stronger and more consistent over the oceans than over the land. Trade winds often produce partly cloudy sky conditions, characterized by shallow cumulus clouds, or clear skies that make trade-wind islands popular tourist resorts.

The image below shows the main near-surface wind directions, with global trade winds in yellow and red color. In the North Atlantic, the circulation pattern is clockwise, as a high-pressure system is present in that region.

Below you can see an image that shows the average surface winds in the past 40 years. This nicely reveals the prevailing easterly trade winds. You can also see the clockwise circulation in the North Atlantic. 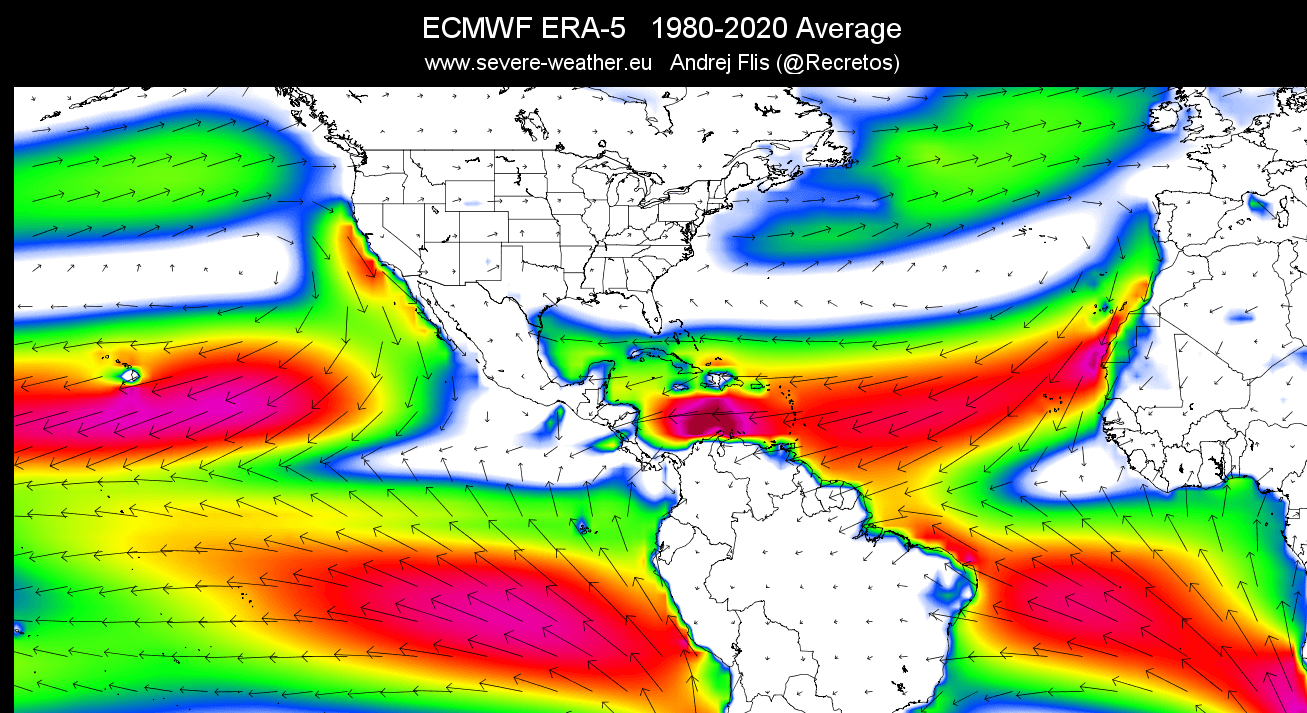 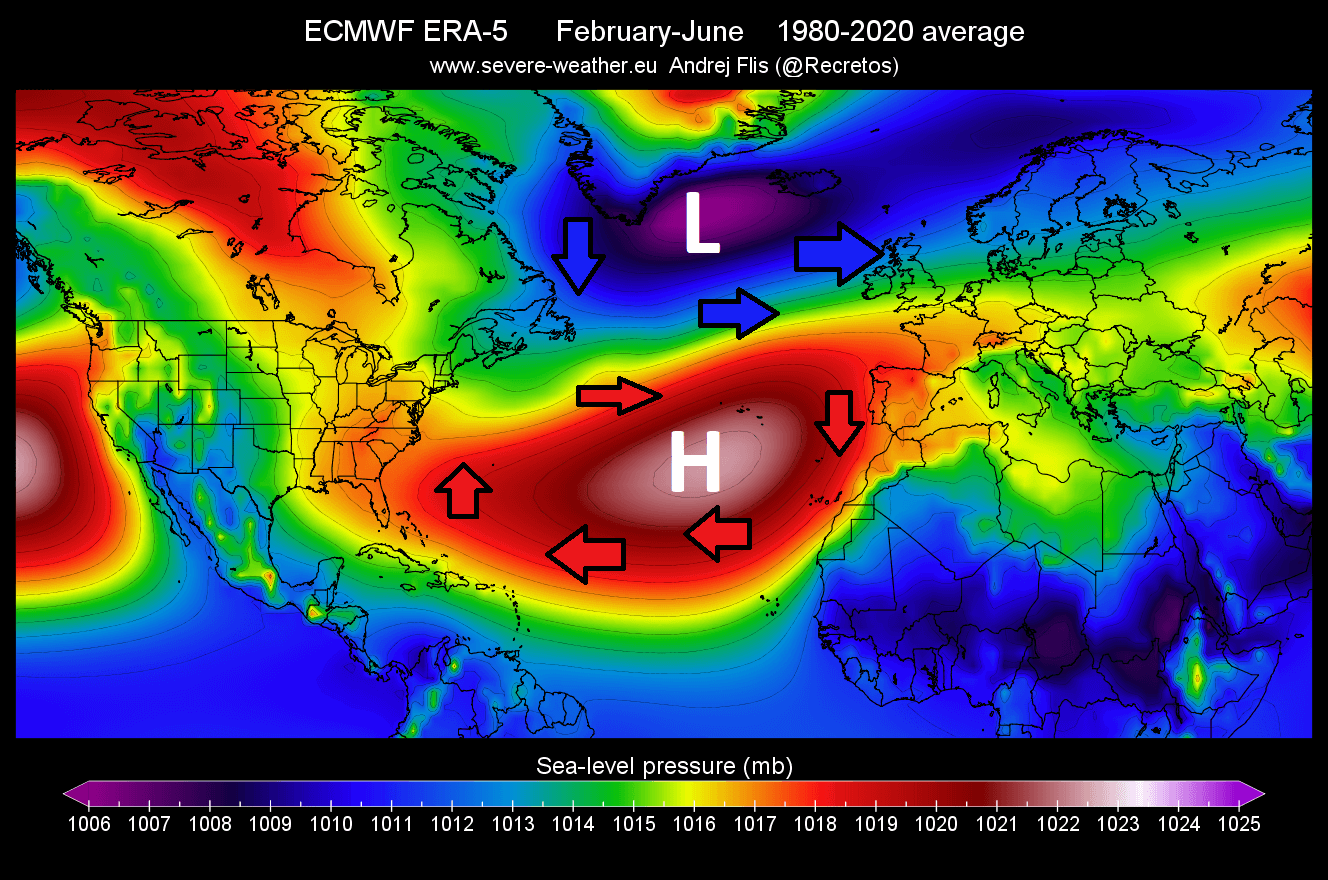 Below you can see the ocean surface temperature analysis from around a week ago. Notice how the ocean temperatures are quite cooler in the eastern Atlantic, compared to the western side. The trade winds cool the ocean surface from West Africa down towards the tropical Atlantic. Notice the strong warm ocean current up the eastern coast of the United States. That is the famous Gulf Stream. 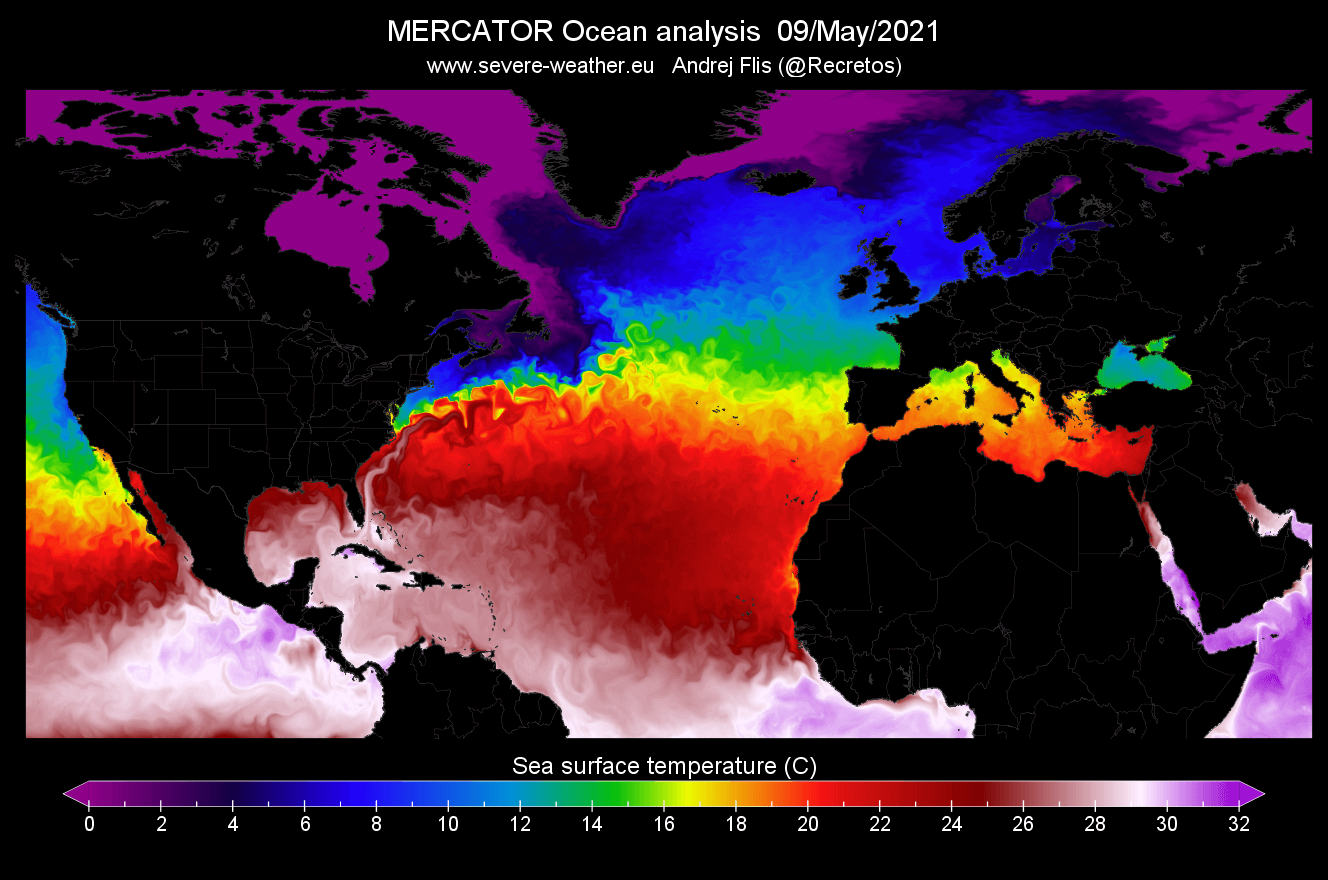 In April 2021, changes in pressure patterns have initiated a change in the strength of the trade winds. As a result, the trade winds were weaker across the subtropical North Atlantic ocean, allowing an onset of a stronger than usual warming of the ocean surface.

Winds are driven by the changes in air pressure, so it is important that we look at the pressure patterns in the North Atlantic since April. This way, it will be easier to understand how pressure changes can affect ocean temperatures.

On the image below we have the early April pressure anomalies in the North Atlantic. You can see that this looks quite different from the average pressure map we have shown earlier up in the article. The pressure systems are reversed, with a dominant high now in the far North Atlantic, and a low-pressure system down in the subtropics.

Looking at the ocean temperature anomalies for this period, we can see the onset of an oceanic warming event in the image below. Warmer than normal waters emerged around the coast of Spain and northwest Africa. The low-pressure system in the subtropics has weakened the trade winds, limiting its usual cooling effect, and allowing for higher than normal temperatures. 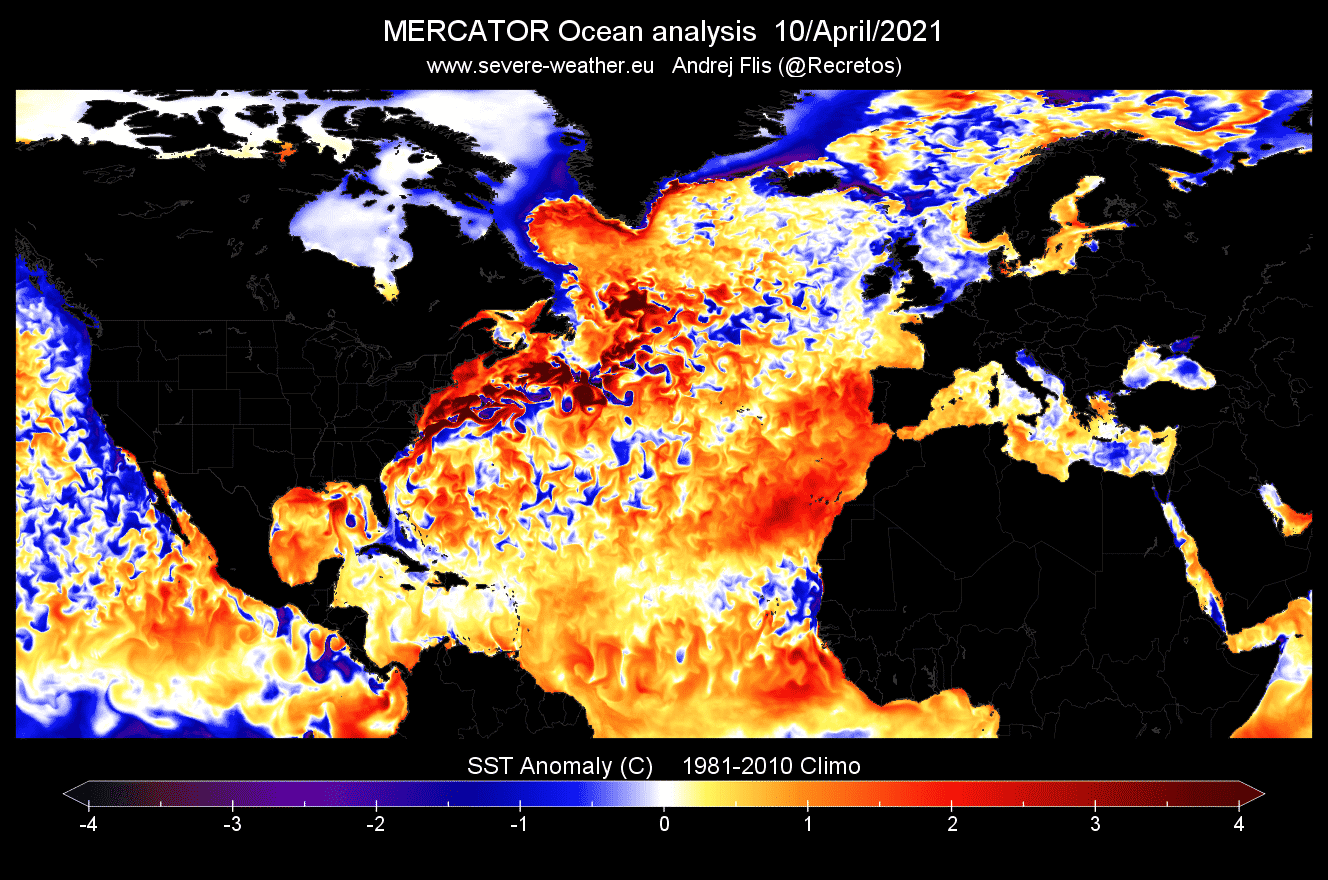 Going into mid-April, the low-pressure area in the subtropics intensified. Low-pressure areas spin counter-clockwise, so this forces an opposite wind pattern, weakening the easterly winds and their cooling effect.

The ocean temperature response was quite strong. With weaker easterly winds, the ocean cooling effect was also limited. This allowed the ocean surface temperatures to rise higher than normal, extending the ocean warming event from northwestern Africa further into the subtropical Atlantic and towards North America. 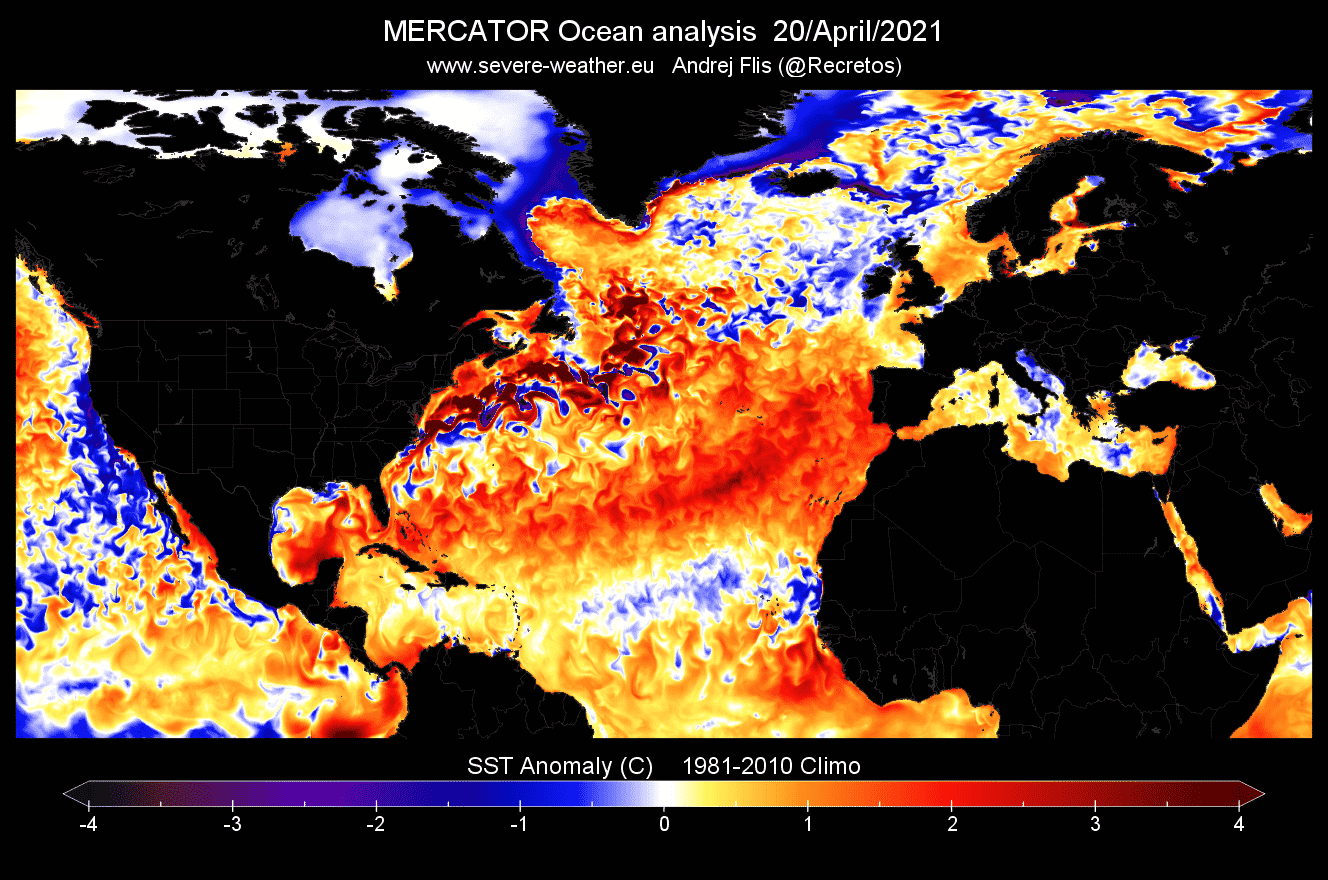 By early May, the low-pressure area was shifting slightly towards the north. But it still had an influence on the subtropical wind patterns, as it was large and strong enough. Its main influence was reaching from the coast of the southeastern United States, into the subtropical Atlantic ocean.

As the easterly winds and their cooling effect were still weakened in the subtropical Atlantic, the warm anomalies have moved further into the central Atlantic. Ocean temperatures were quite higher than normal across a large area, extending from Europe to the southeastern United States. 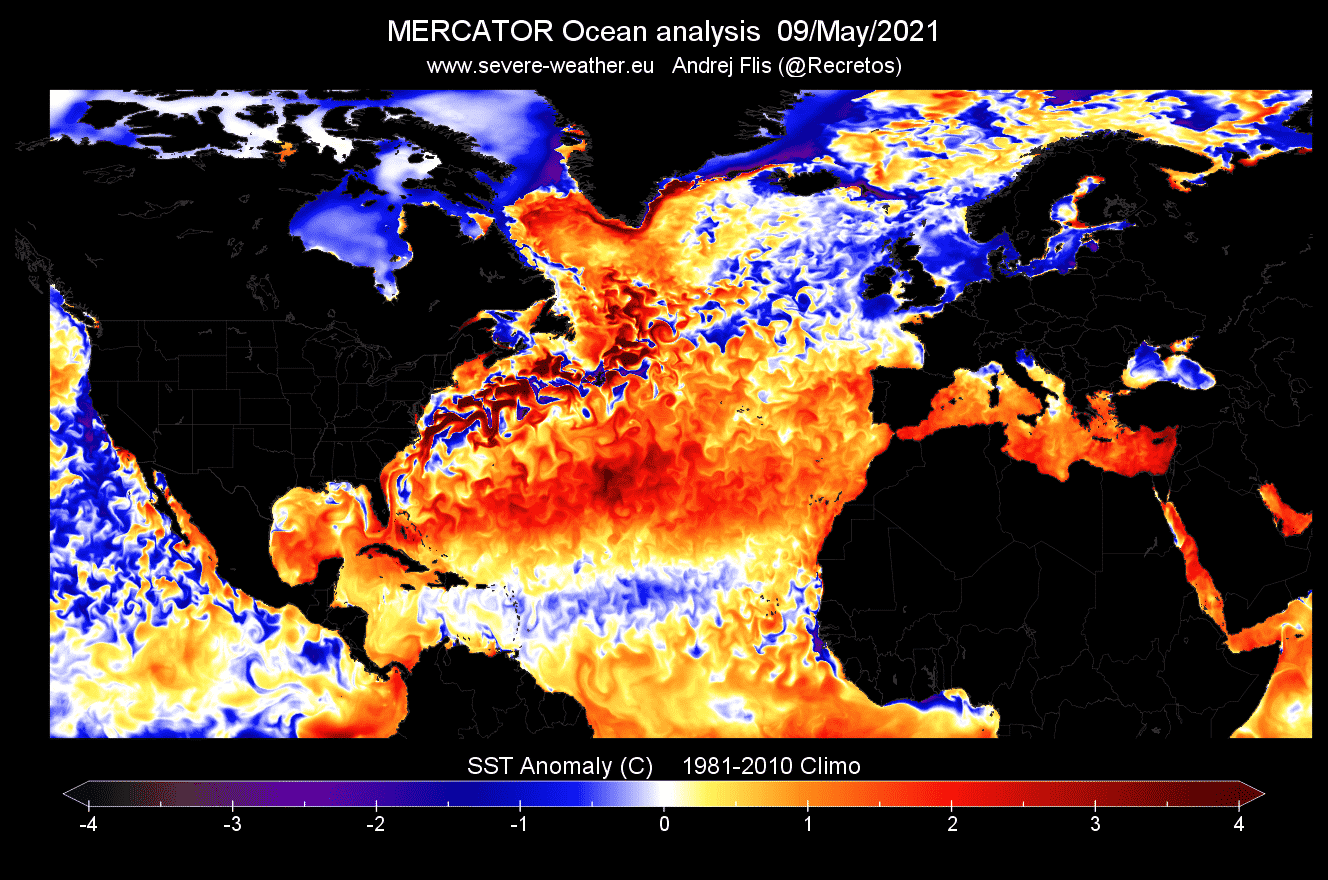 Looking at the latest analysis, we can see that the warming has continued, with much warmer than normal temperatures now being detected in the subtropical North Atlantic. 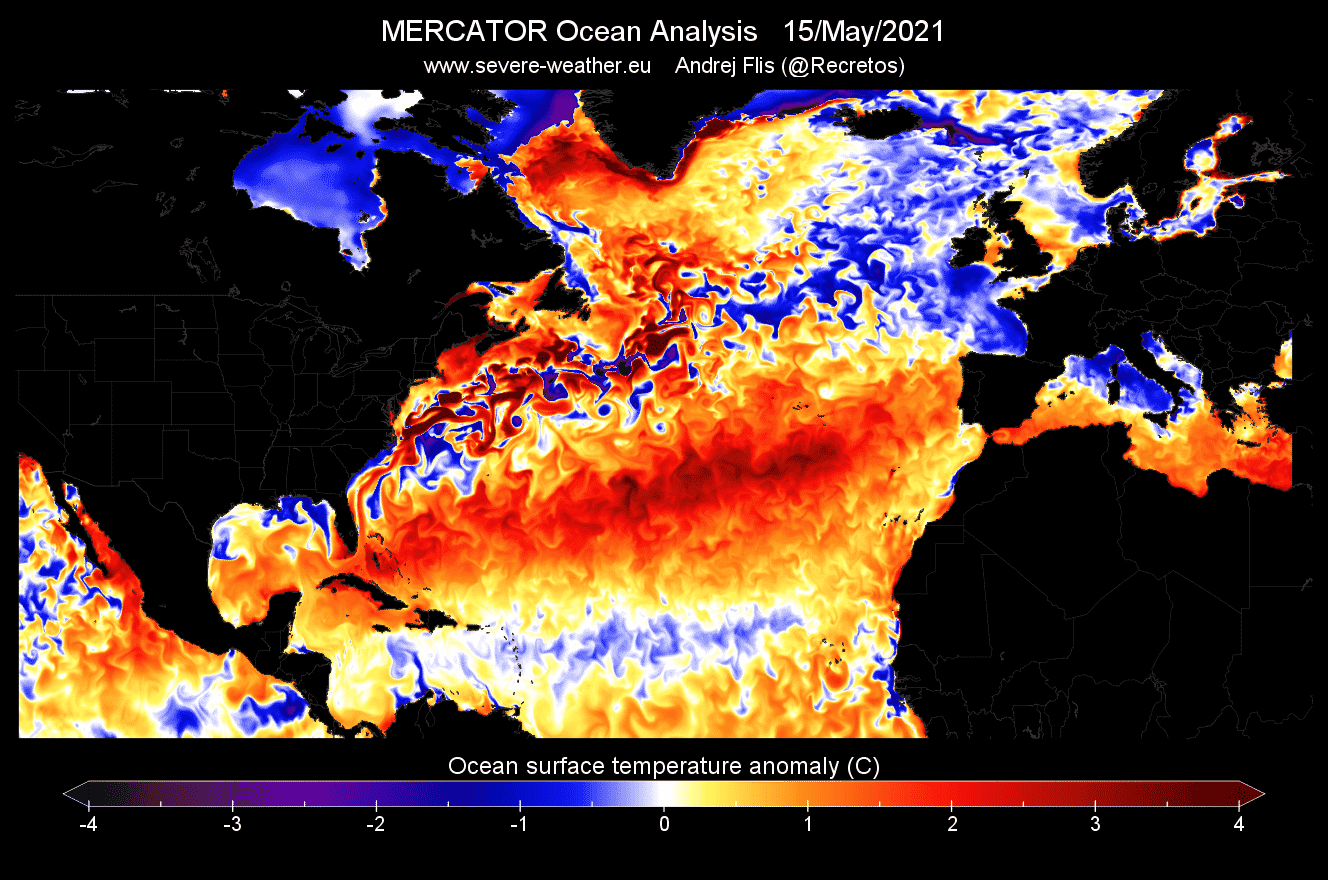 On the image below, you can see the 15-day change in ocean surface anomalies. It reveals a huge area of warmer than normal ocean temperatures. The warm anomaly area has intensified and has also grown in size. This was enabled because the cooling effect from the trade winds was limited, thanks to the pressure changes in the Atlantic Ocean. 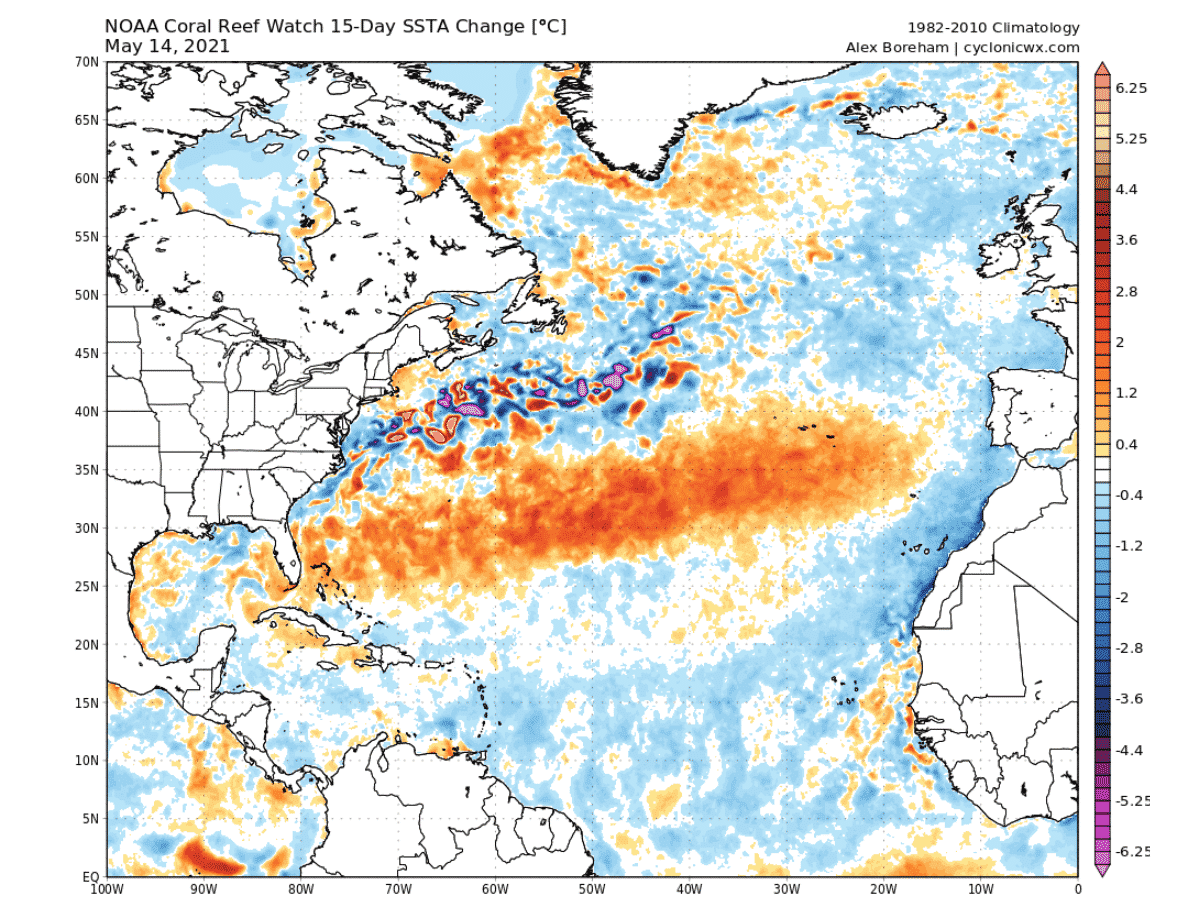 The graph below by Alex Boreham shows the temperature progression in the subtropical Atlantic, showing a fast and steady temperature increase. These are of course the raw values, and we need to remove the seasonal warming that happens every year, to get the real picture. 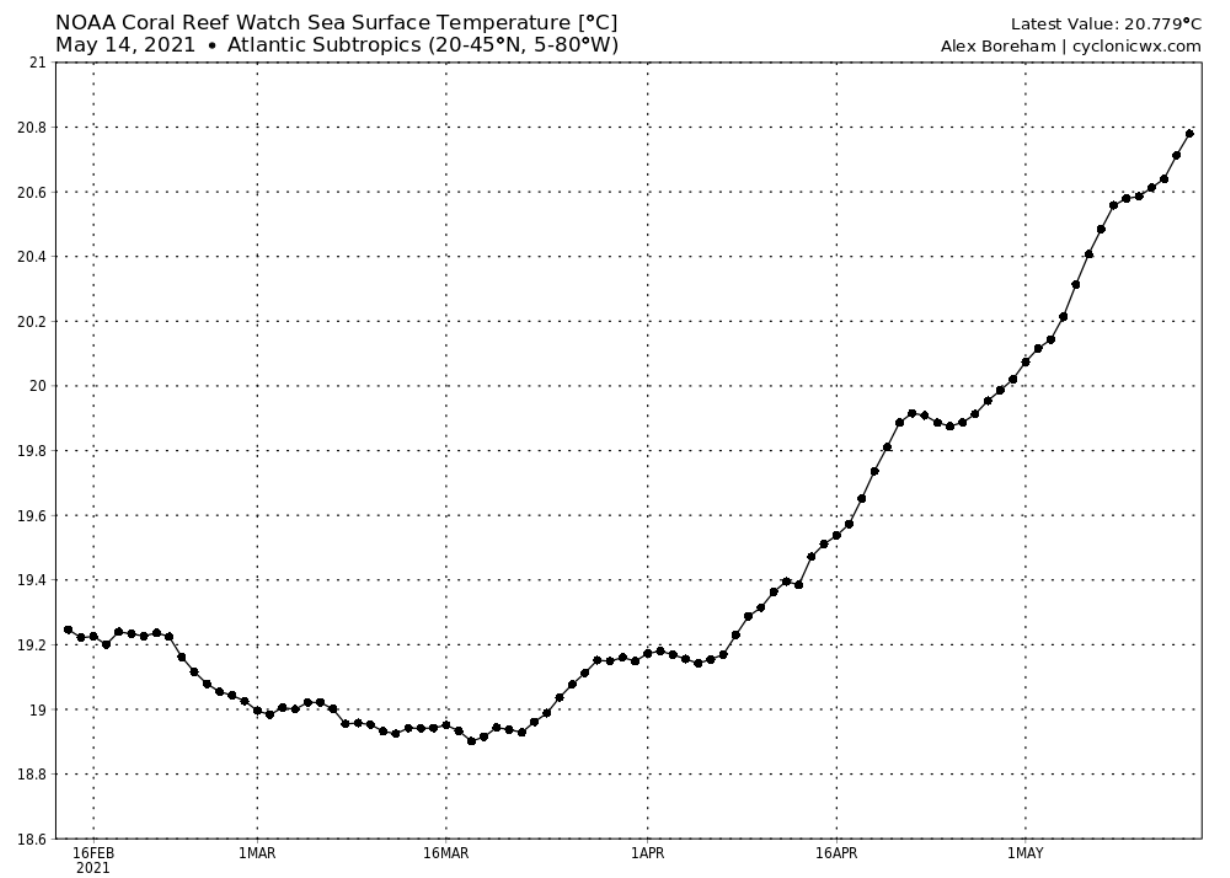 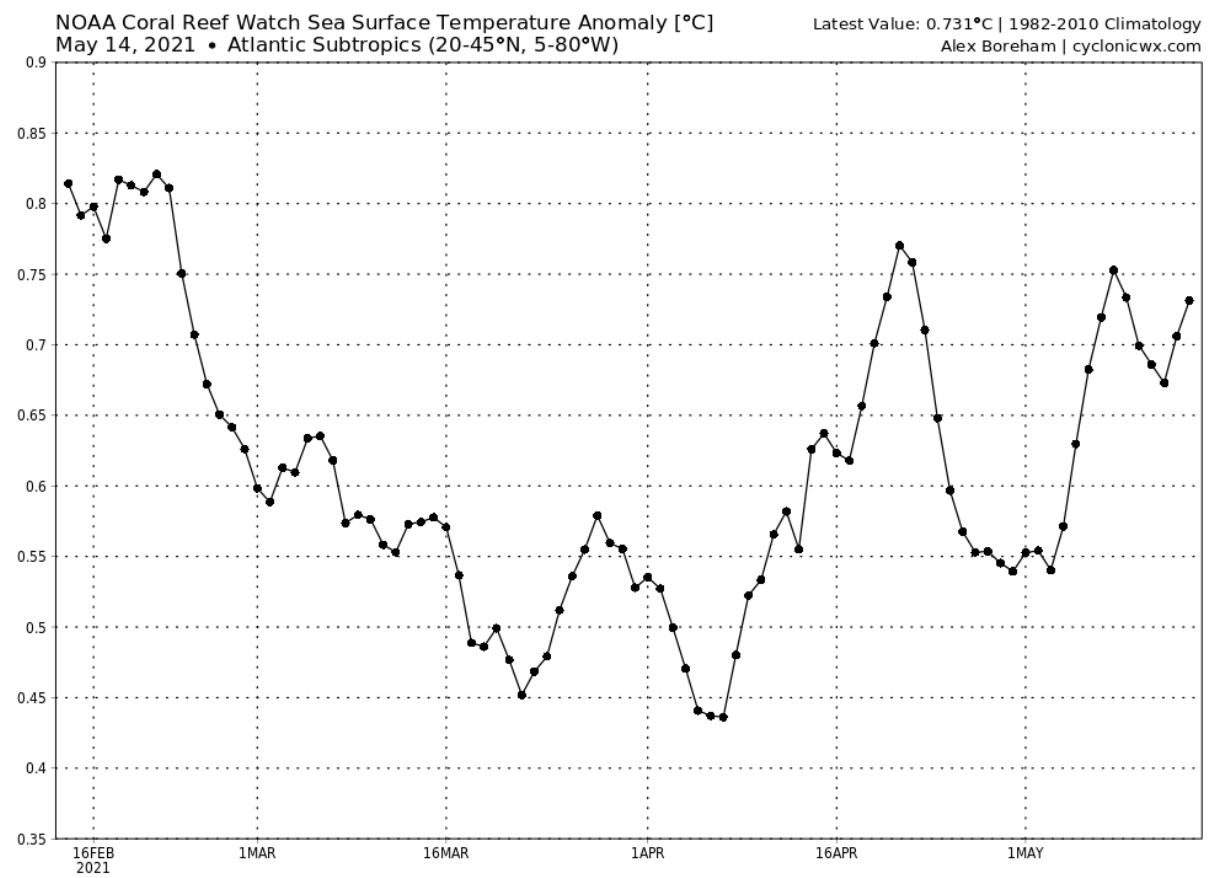 Forecasting ocean temperatures is not an easy task. Because the connection between the ocean and the atmosphere is so strong, it is crucial to have a good weather forecast, before models can calculate the oceanic response.

Below we have a 10-day ocean temperature change forecast, initiated on Friday, 14 May. The ocean model takes the information from the weather forecast, trying to calculate how it will affect the ocean temperatures. We can see how the central and eastern subtropics will continue to warm. But a surface ocean cooling will occur from the western subtropics up towards the northeast. 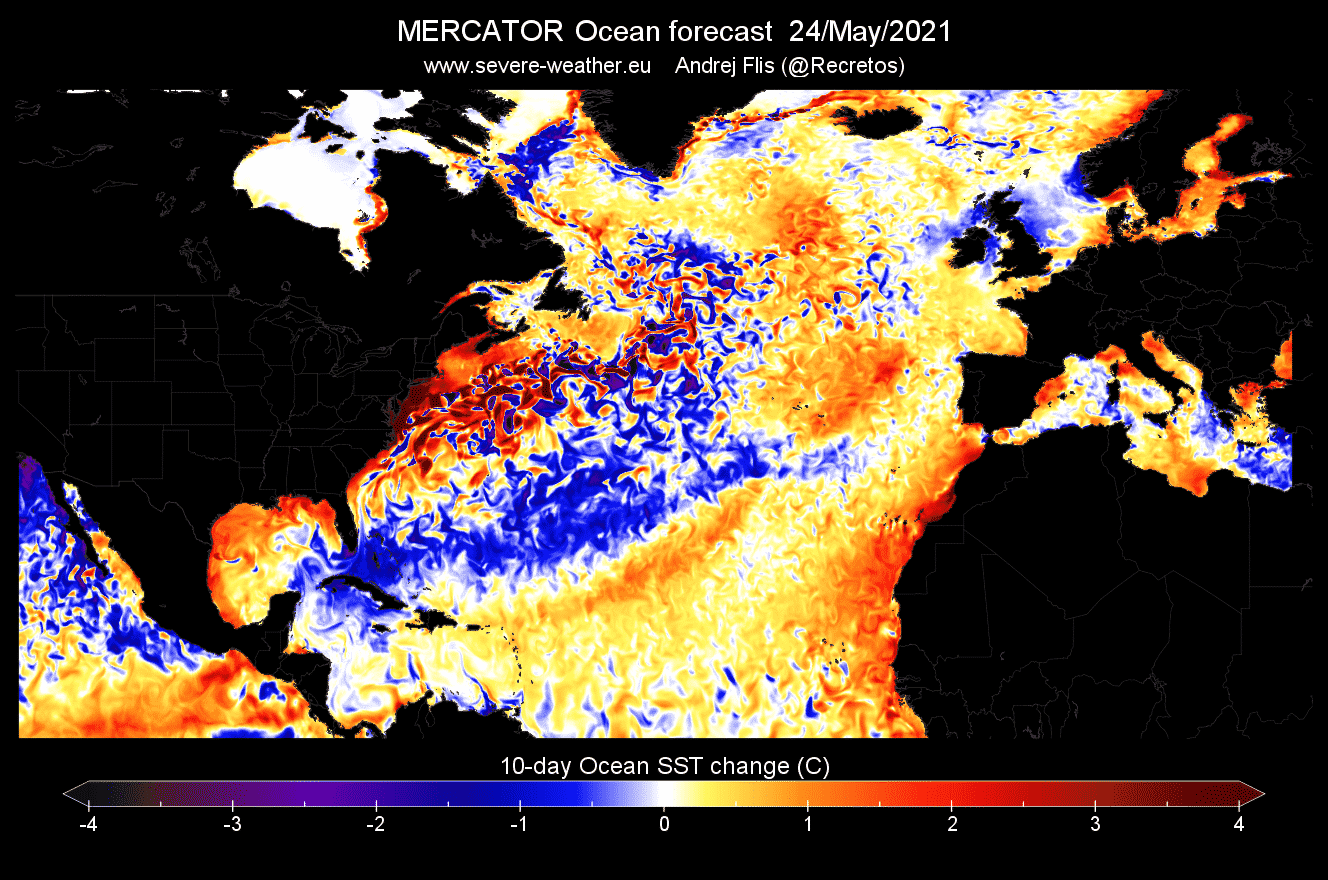 As we know already, the weather can influence ocean temperatures, and vice-versa. The cooling that is forecasted above, has its roots in the pressure patterns. In the coming week, a high-pressure area will move from the eastern United States into the North Atlantic, changing the wind patterns in the Atlantic. 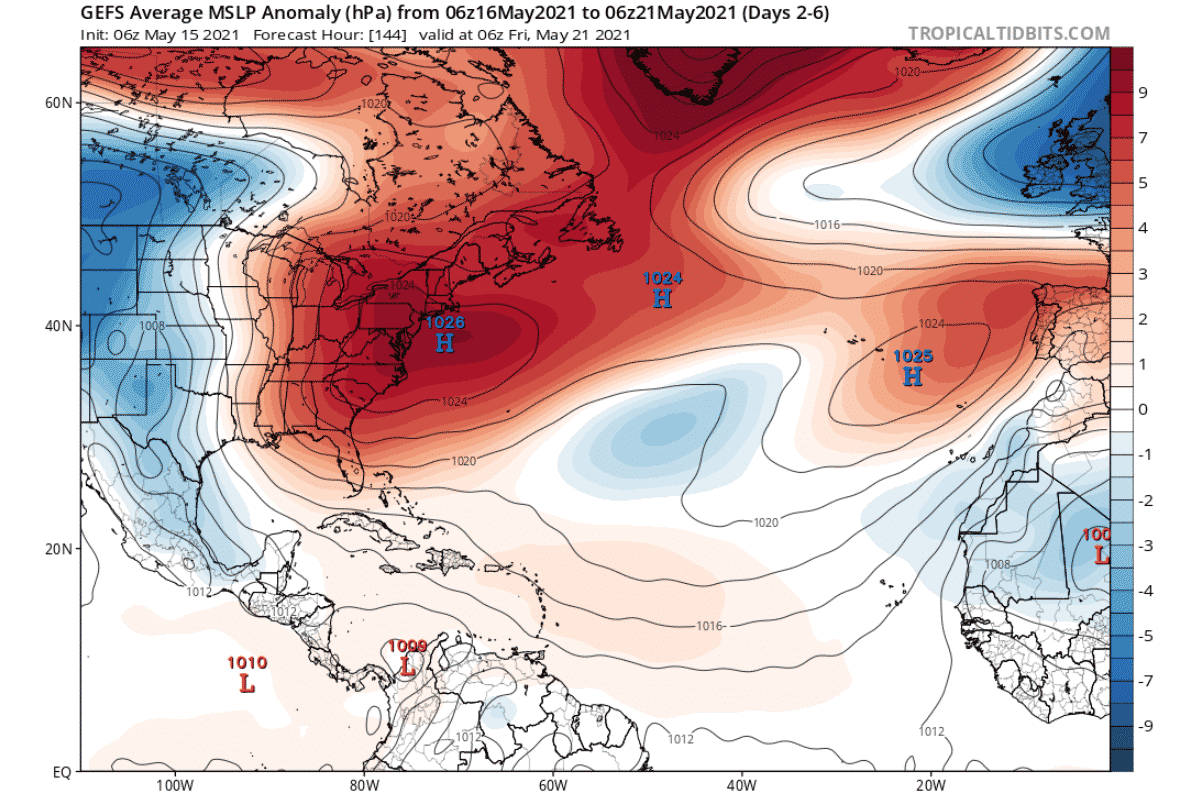 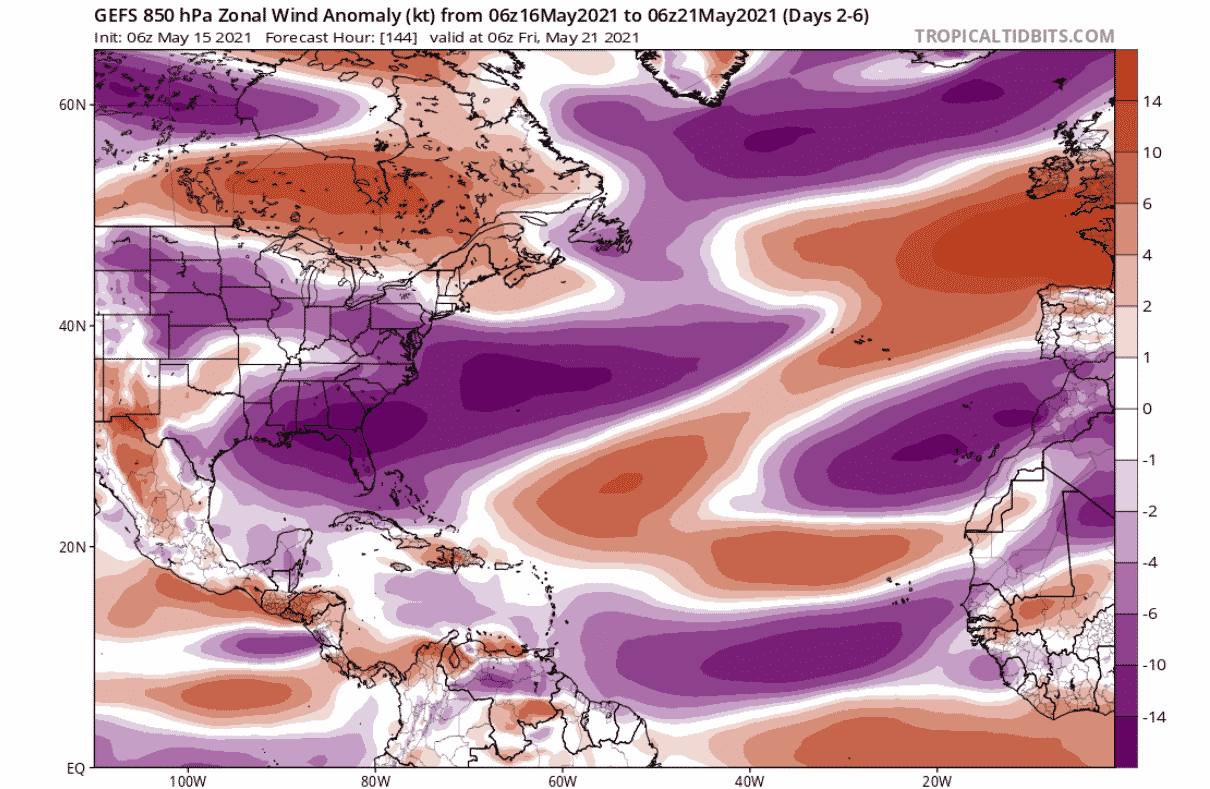 We can see in the image, that there is a large area of easterly winds over the southeastern United States, expanding out into the western subtropical Atlantic and towards the northeast. This is the region that we have seen on the ocean temperature forecast to cool, and these stronger easterly winds are one of the main reasons.

Towards the end of May, a high-pressure system is expected to establish over western and northwestern Europe. The subtropical high-pressure area will be weaker, with negative anomalies from the North Atlantic down into northwestern Africa. 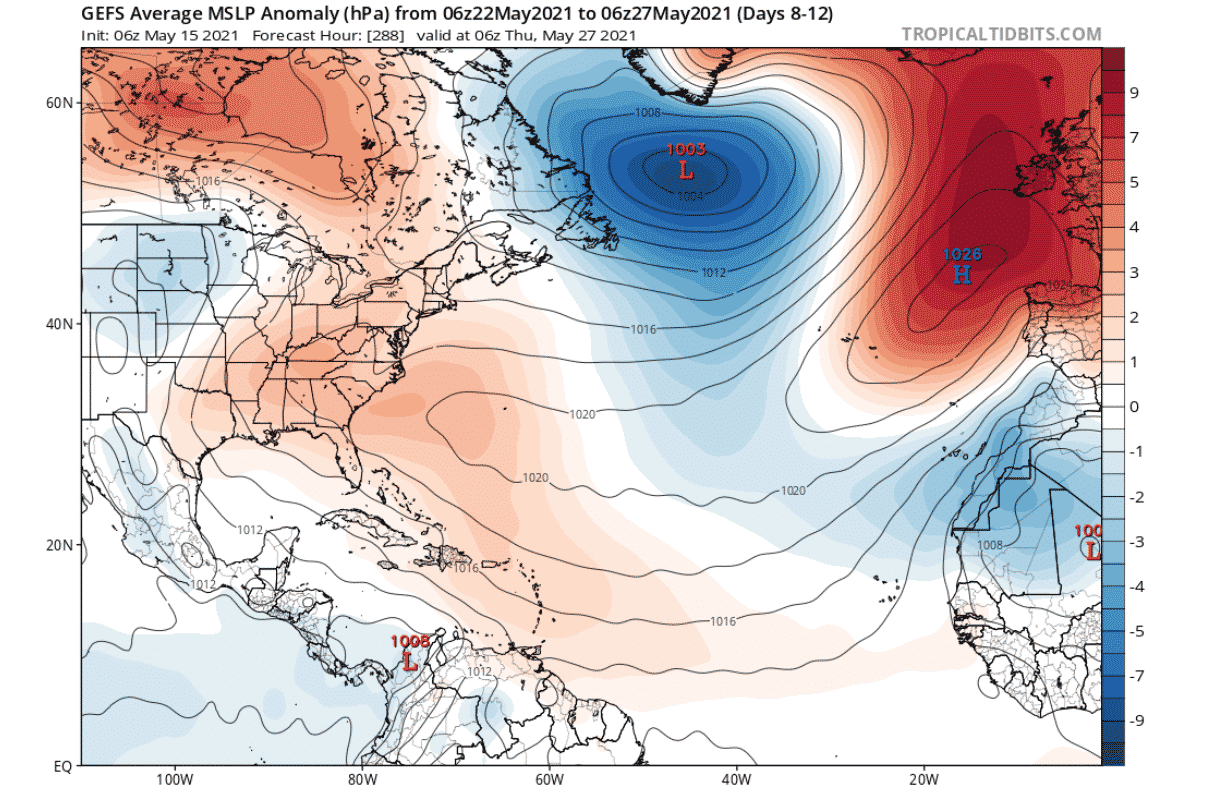 The wind forecast for this period shows westerly wind anomalies in the central Atlantic, while there are easterly anomalies over the southeastern United States and in the eastern subtropics. Ocean temperatures will likely have a cooling tendency around the eastern and southeastern coast of the United States and off the coast of Spain and northwestern Africa. Central Atlantic will likely see continued above-normal temperatures. 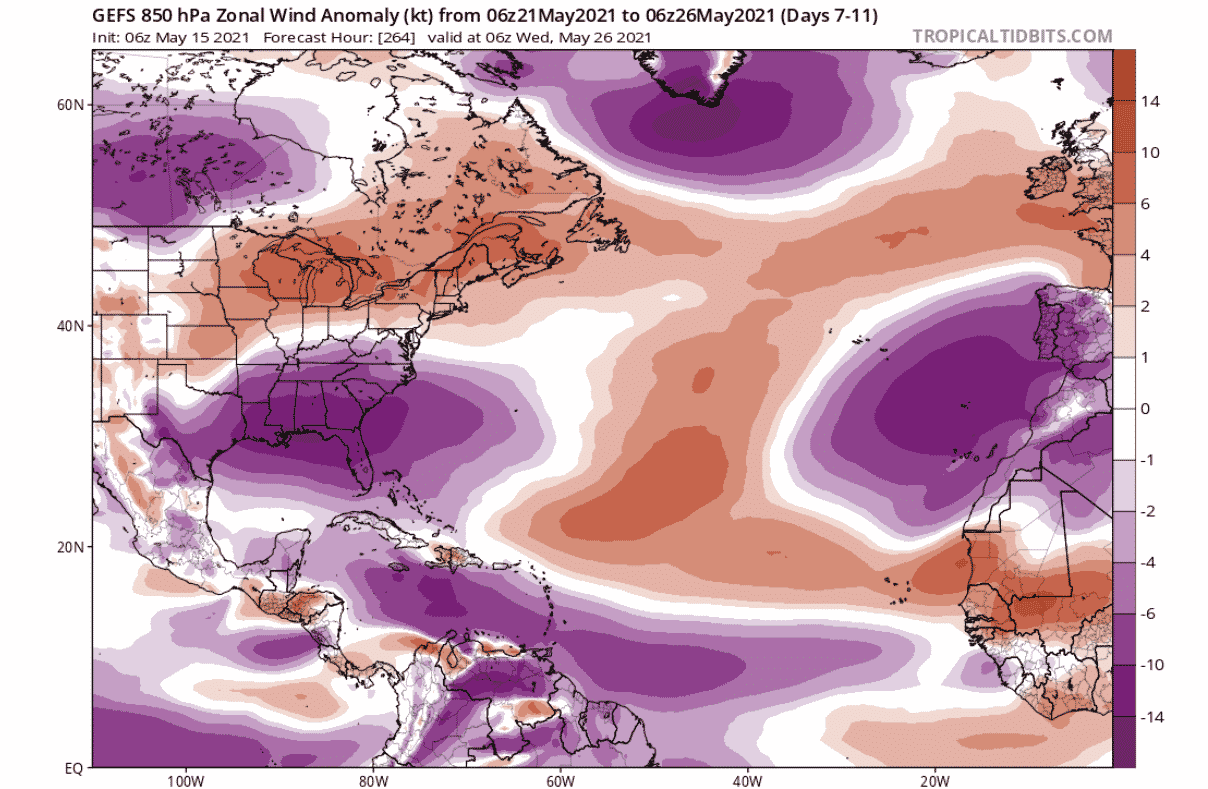 Below is a monthly ocean temperature forecast for June, from the United States CFSv2 long-range model. We can see that the subtropical North Atlantic ocean will remain quite warmer than normal, due to the weaker subtropical high-pressure system and thus weaker trade winds.

Below we have an interesting graphic, which shows the correlation/connection between the spring ocean temperatures and the energy of the Atlantic hurricane season. The image basically shows the spring ocean temperatures that correspond to the more active hurricane season. What stands out is of course the warmer tropical and subtropical North Atlantic ocean. 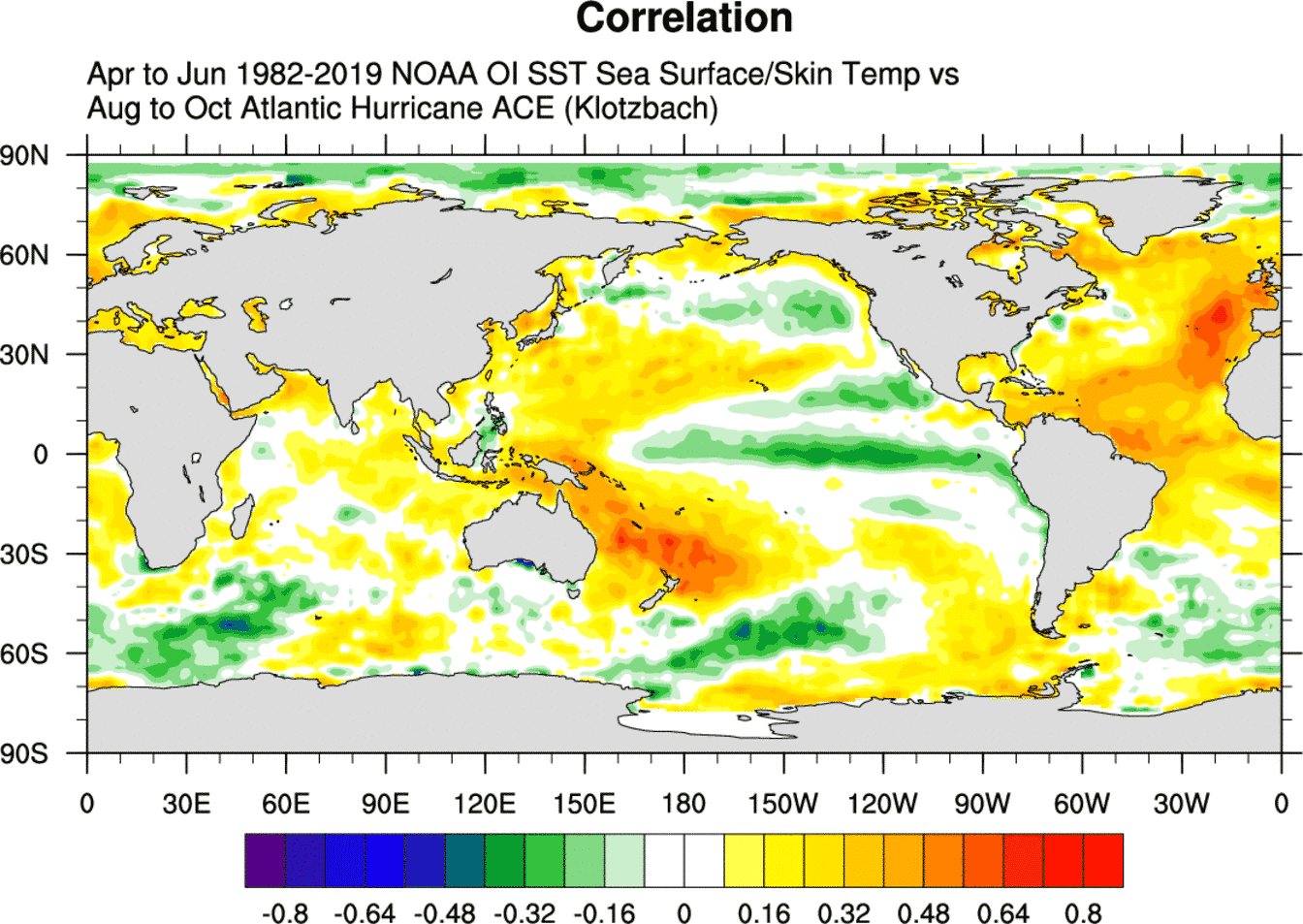 We produced two special graphics, which directly compare the May and June subtropical North Atlantic ocean temperatures with the activity of the hurricane season in the past 40 years. The bottom axis shows ocean temperature anomaly, and the vertical axis shows the Atlantic ACE index, which is an index of total hurricane energy released.

The first image shows the May ocean temperatures. You can see that the more we go to the right (warmer spring ocean), the more the Atlantic hurricane energy increases. This corresponds to more storms or stronger storms. Each dot represents one year or one season. 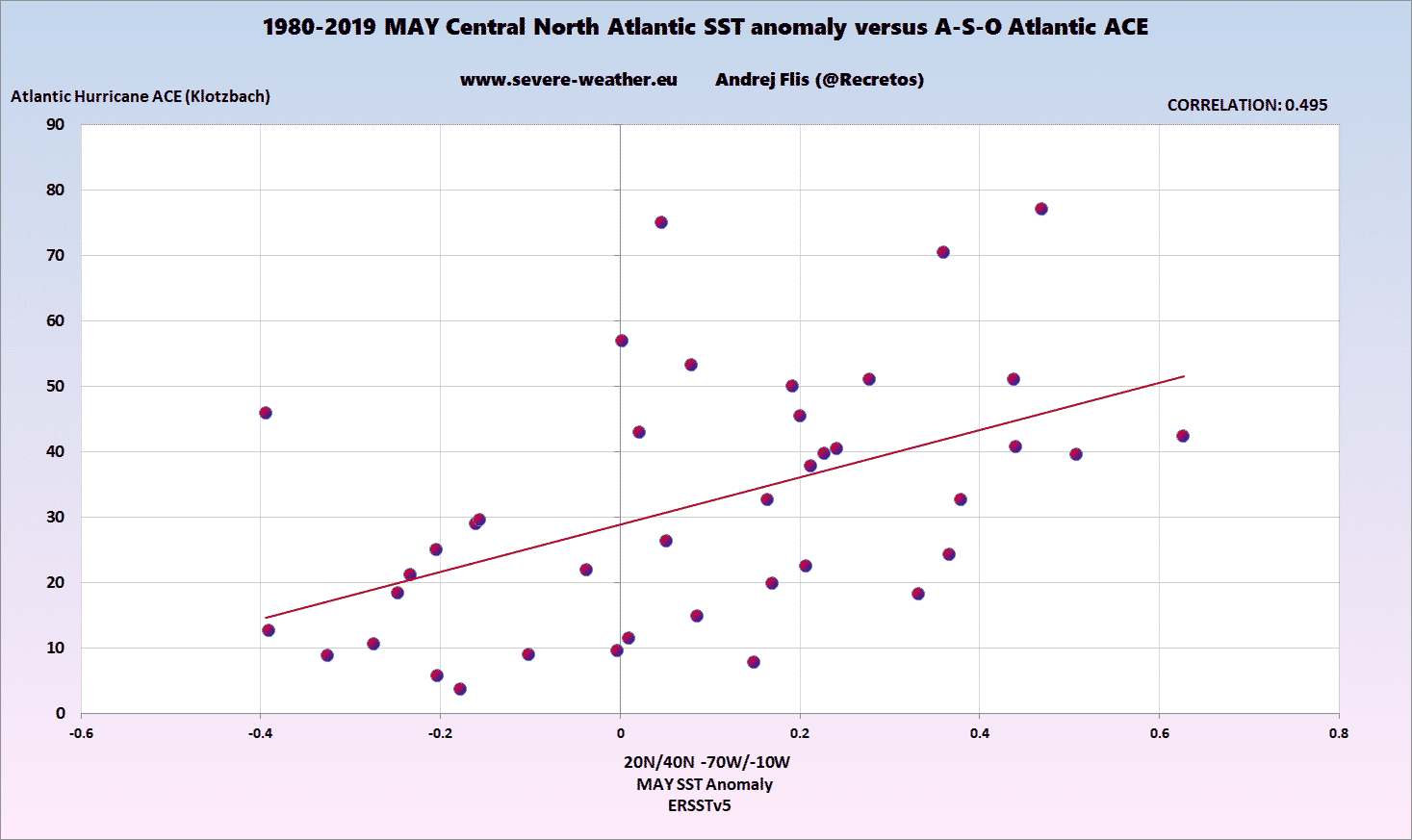 The second image shows the relationship between the June ocean temperatures and the hurricane season. Here, the relationship is perhaps even more obvious. Warmer than normal June subtropical Atlantic is now a strong signal for more storms or stronger storms. 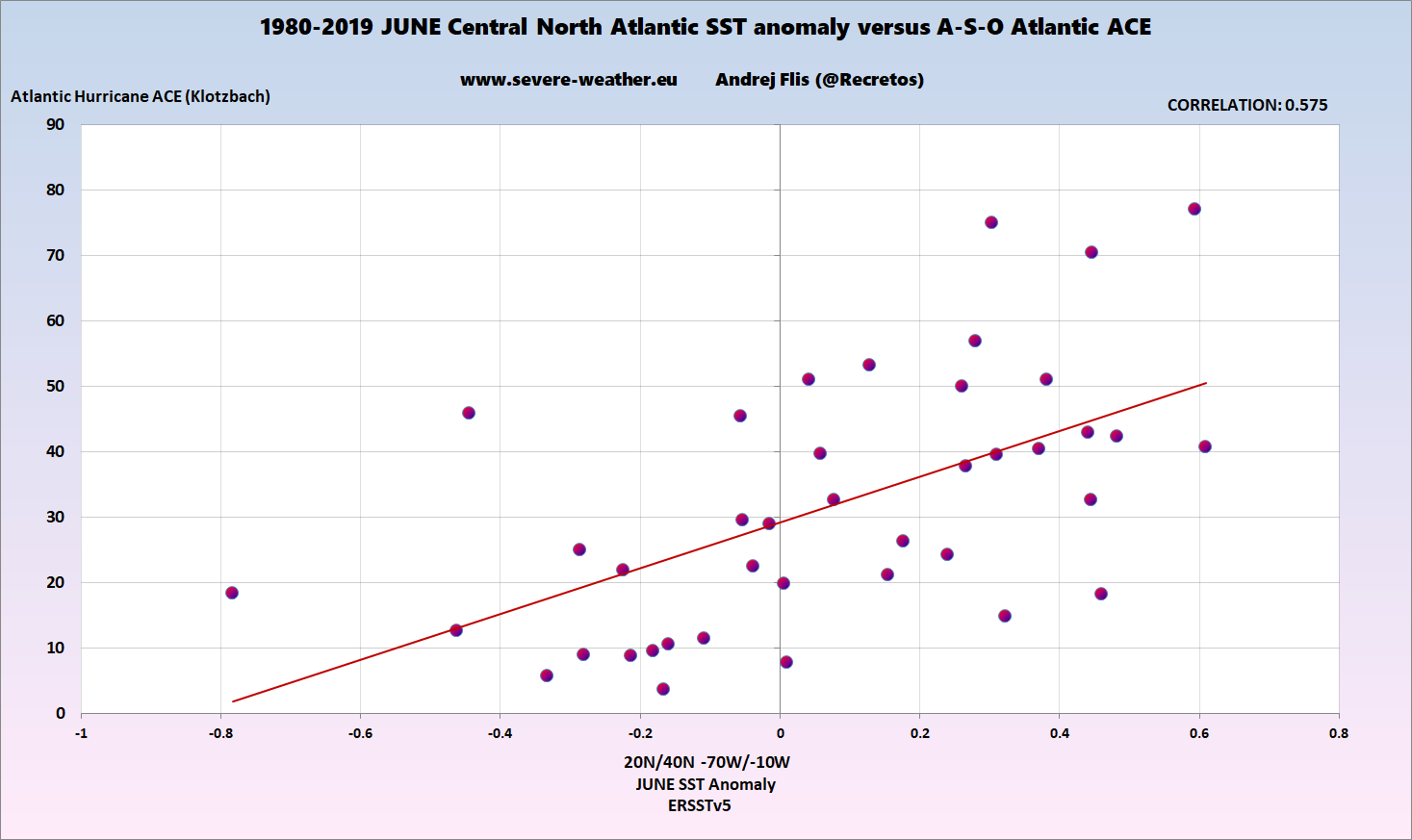 The reason for this connection is perhaps quite simple. As the oceans get warmer than normal in spring and into summer, it is very likely they will stay warmer into Autumn. It is harder to massively cool down the entire tropical and subtropical ocean in summer.

Warmer oceans provide more available energy for the tropical systems and can cause stronger storms if other factors allow it. This of course does not mean that we can have more landfalls, as that depends on the overall pressure patterns and steering mechanisms.

Below we have a practical example, looking at the sping 2020 period. The subtropical Atlantic was quite warmer than normal, all the way from the Gulf of Mexico up towards Europe. 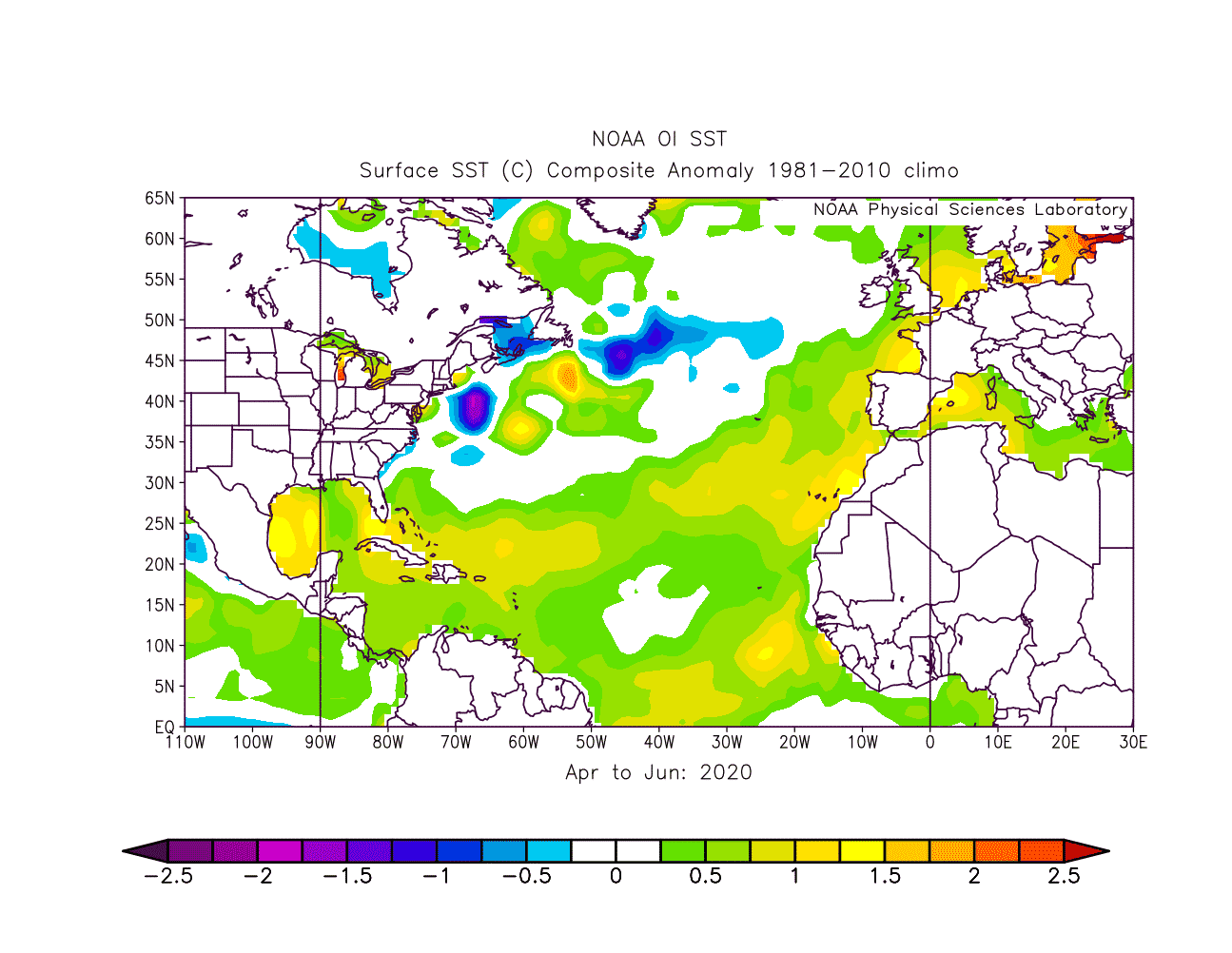 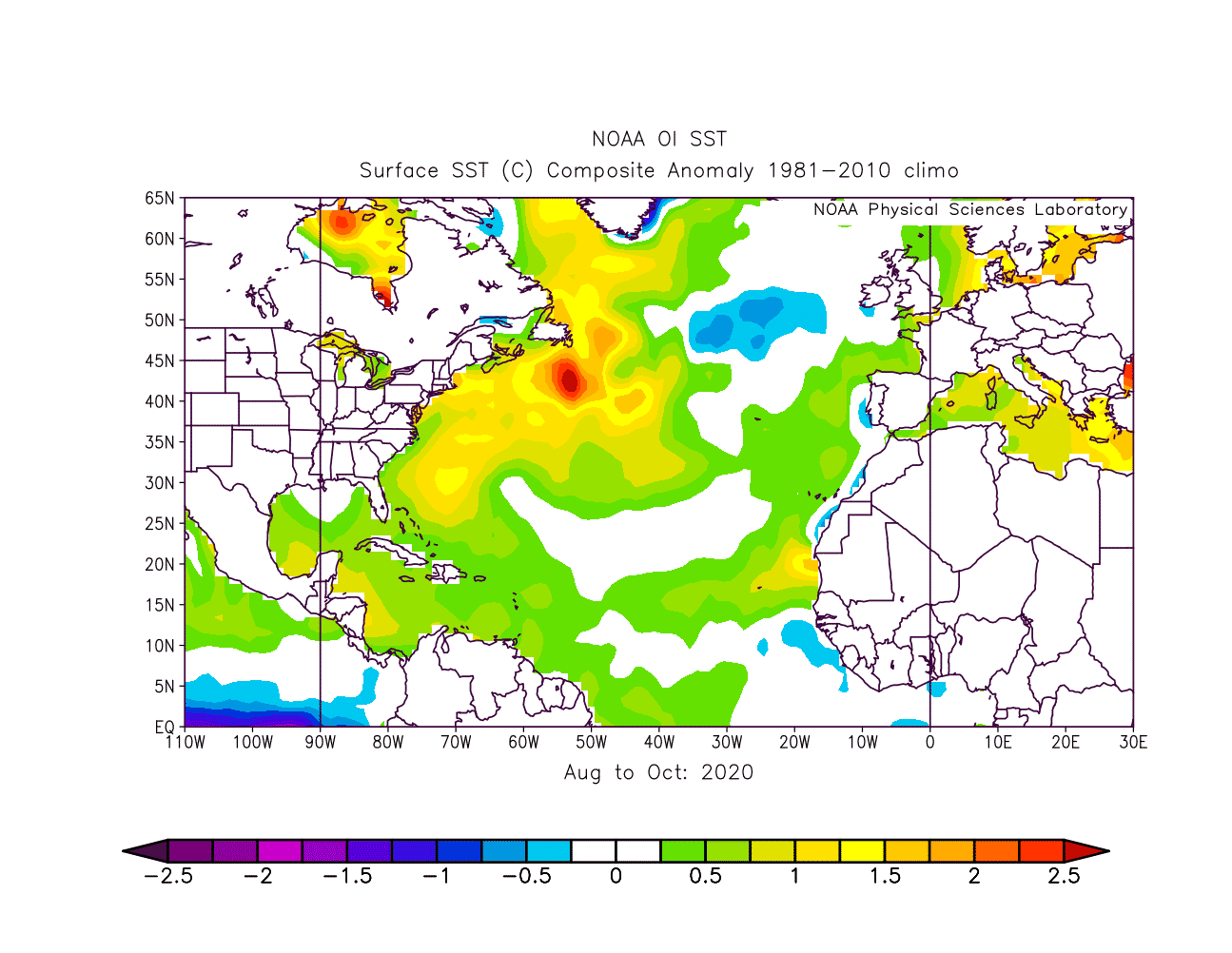 The current ocean temperature forecast for the tropical season shows a concerning picture yet again. warmer development region and the subtropical Atlantic. It is not yet known how supportive the atmospheric conditions will be, but the ocean will be warmer than normal, and able to support stronger and/or longer-lived storms.

Looking at the precipitation forecast from the European ECMWF model, we can actually see less precipitation during the tropical season in the main development region. This could indicate that despite the supportive ocean conditions, the atmosphere might not allow a super active tropical storm season. 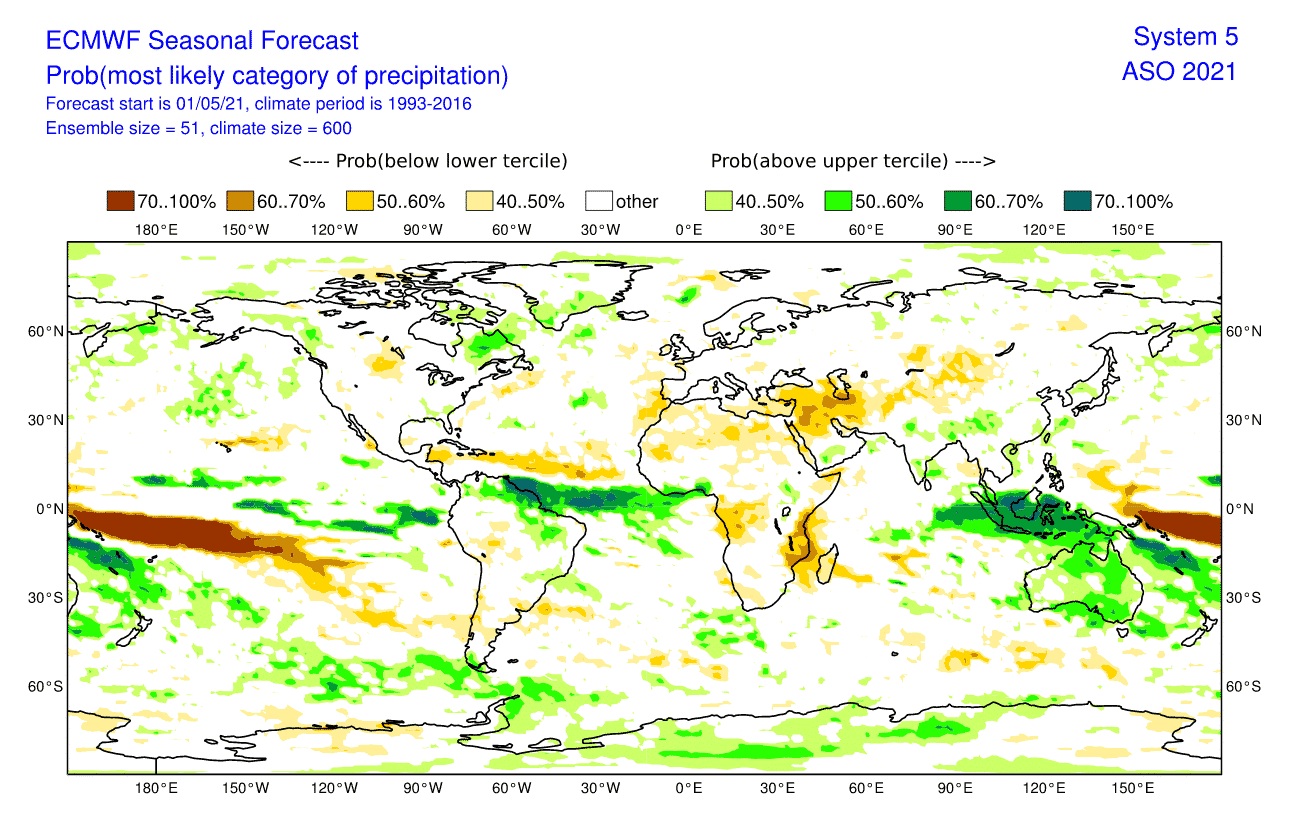 But, the North American NMME forecast contains several different models, to combine more ideas for the main forecast. It shows more precipitation during the tropical season, from western Africa out into the Atlantic. This can indicate more tropical activity, but not necessarily stronger storms. 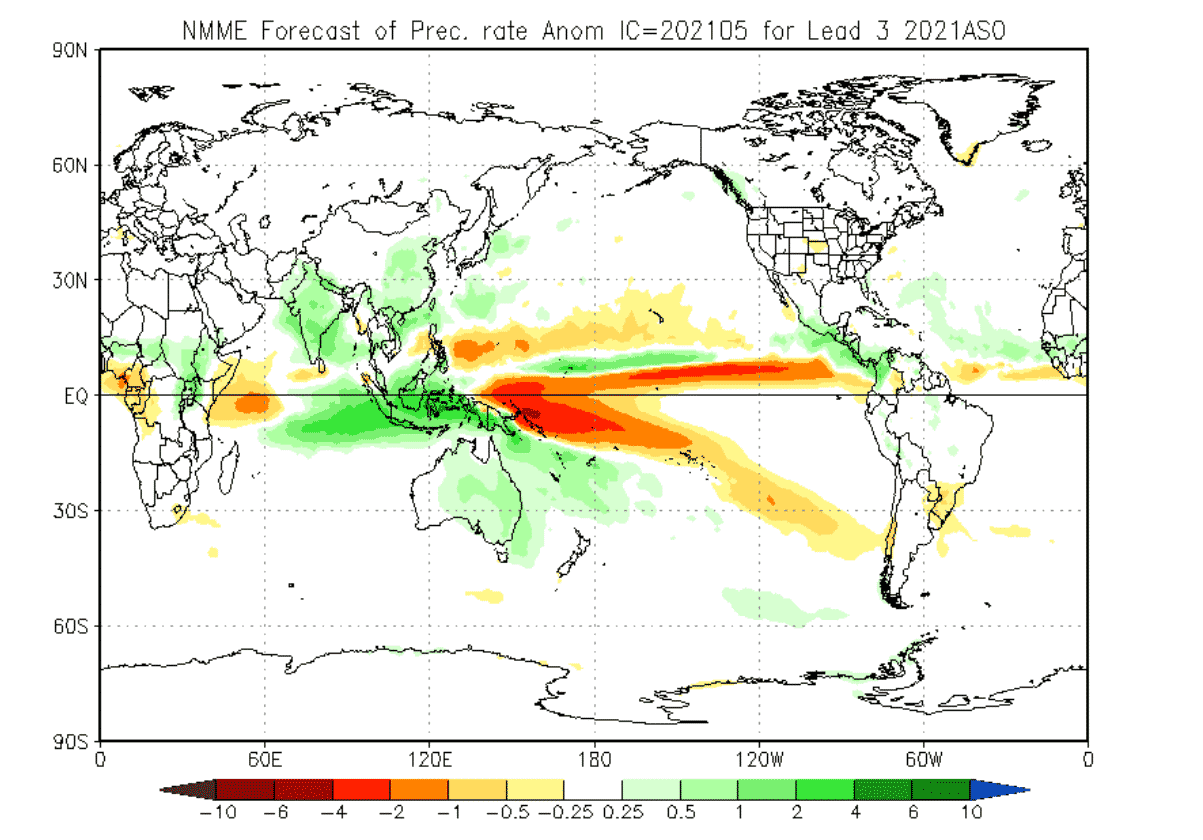 Based on all the historical data, there is a high chance that the current warmer than normal subtropical Atlantic ocean will translate into supportive conditions for the tropical season. A lot depends on the atmospheric conditions, but having warmer than normal ocean temperatures is never a good sign when going towards the next tropical storm season.

We will keep you updated as fresh data is available, and more reliable projections can be made. Make sure to bookmark our page, or click on “show more” if you are reading this article from the Google Discover feed.