It’s been a while since there was a proper North Atlantic storm on its way towards western Europe. This week, a quite impressive development of an extratropical low is expected on Wednesday, drifting into Ireland, Wales, and England through Thursday. It will bring a rather severe windstorm and major waves along the coastal areas to the south.

While the weather across the western half of Europe is rather stable lately, there are some quite significant changes coming up late this Wednesday into the night. A rather deep North Atlantic storm will develop and blast into western Europe with unsettled weather conditions expected on Thursday.

This new Atlantic low will develop a quite strong windstorm with severe winds quite likely along the southern coast of Ireland, Wales, and southwest England on Thursday. And indeed generating major waves that could be as close as 10-12 meters while the storm travels across Ireland. 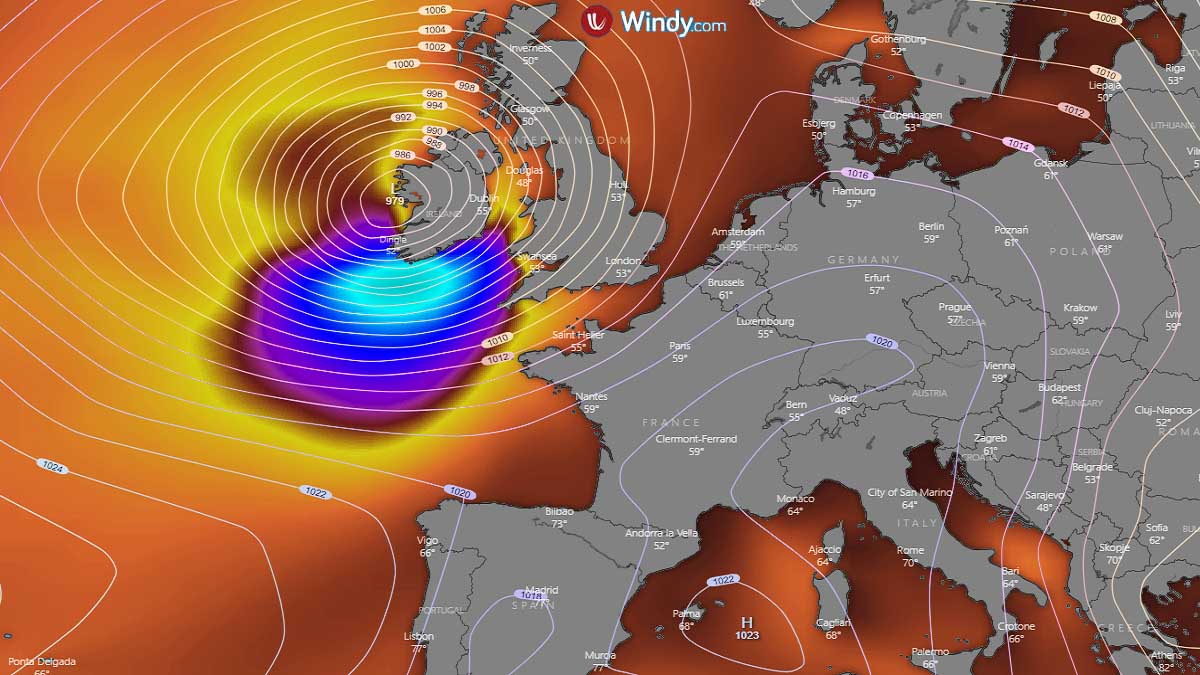 Here is a quick video animation overview of the approaching surface depression from the Atlantic, spreading across western Europe while intensifying on Thursday. While showery weather remains around the center low, a windstorm develops to its south.

Let’s take a look into some more details. On the recent satellite observations over the North Atlantic, we can already see the birth of this potentially damaging windstorm on Thursday.

After the storm, colder air will spread towards western Europe over the weekend.

EXTRATROPICAL STORM FORMATION IN THE ATLANTIC

On Tuesday afternoon, May 18th, a look over the water vapor satellite image across the North Atlantic indicates a rather stable condition spread from Iceland to western Europe, as well as further south across the Iberian peninsula.

While also the Azores are under a high-pressure system and stable weather, hints of a newly developing Atlantic storm are visible to the north of the Azores. A classic development of an extratropical low with a frontal fracture and a large warm sector ahead of the intrusion of drier air behind the cold front. 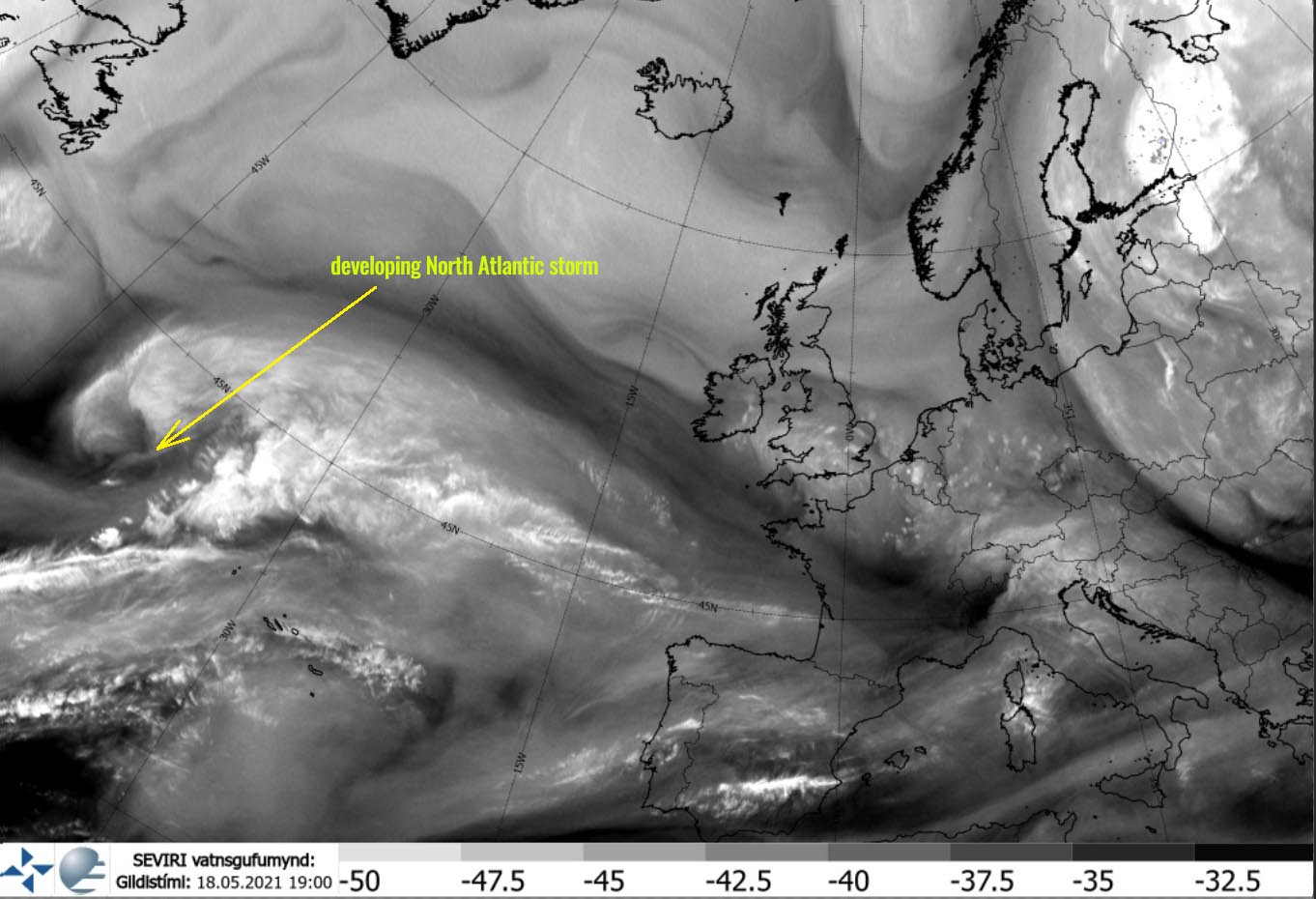 This also hints that late Wednesday into Thursday morning could be a quite spectacular satellite presentation with the surface low deepening and organizing towards western Europe.

As of Tuesday 12 UTC afternoon surface analysis, we can see the open wave deepening around 40W, this is our featured developing storm. It should deepen to around 995 mbar by Wednesday afternoon, then begin deepening with a faster rate coming closer to Europe. 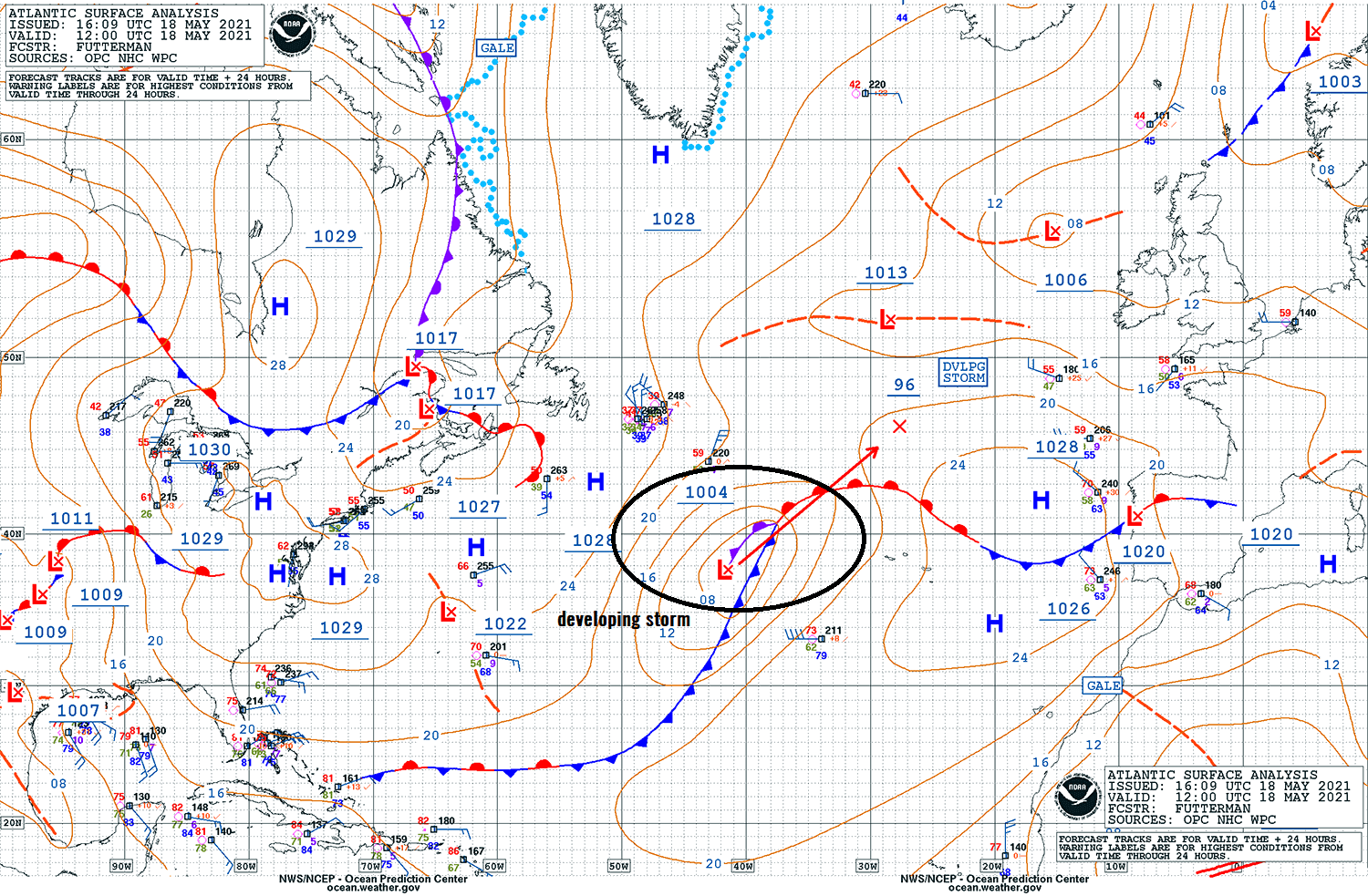 This interesting pressure analysis also shows how this new Atlantic depression is basically an alone system in the middle of high-pressure systems. One over the Arctic region, another across the eastern half of North America, and the third one from the Azores to western and southwestern Europe.

On Wednesday, May 19th, the general pattern across the western half of Europe reveals a large Azoric high-pressure system, extending into the western and southwestern parts of the European continent. The newly developing North Atlantic storm can be spotted to the west of the Bay of Biscay.

The extratropical low will be gaining strength quite rapidly and should deepen into the mid 980s by the afternoon and evening hours. Although looking rather small compared to the higher pressure surrounding it, its strength should combine both windy and rainy weather conditions towards Ireland and the UK later on. 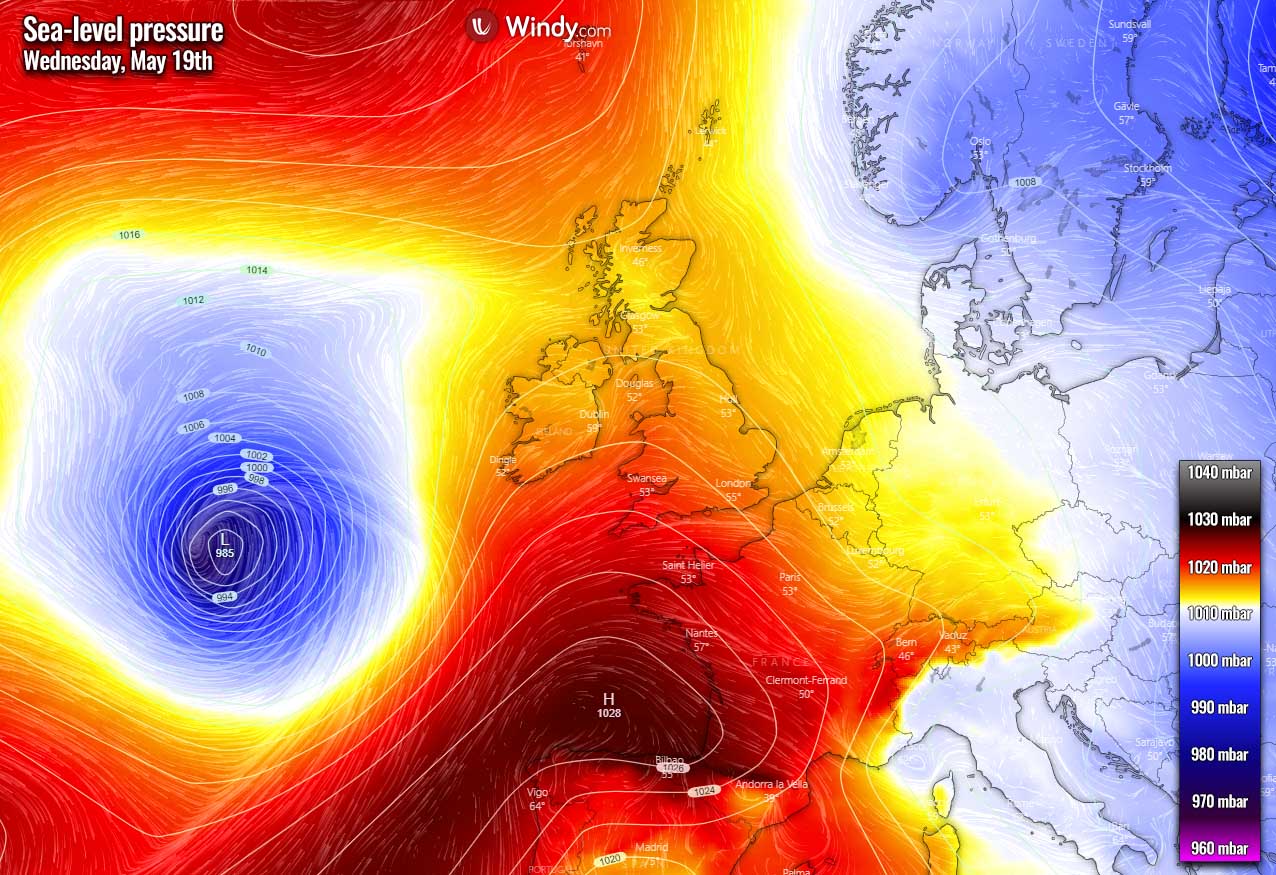 But at the same time, the pattern will be changing as the upper-level ridge and surface High across southwestern Europe vanishes. Allowing the new Atlantic depression to continue straight towards western Europe.

When the deepening low approaches western Europe on early Thursday, it keeps gaining strength and intensity. While its central pressure continues deepening, reaching below 980 mbar when the center arrives closer to Ireland. The general wind pattern over western Europe is indeed influenced by the storm.

The isobars (lines connecting the same surface pressure) tighten up throughout the day on Thursday, gearing the storm’s wind intensity. 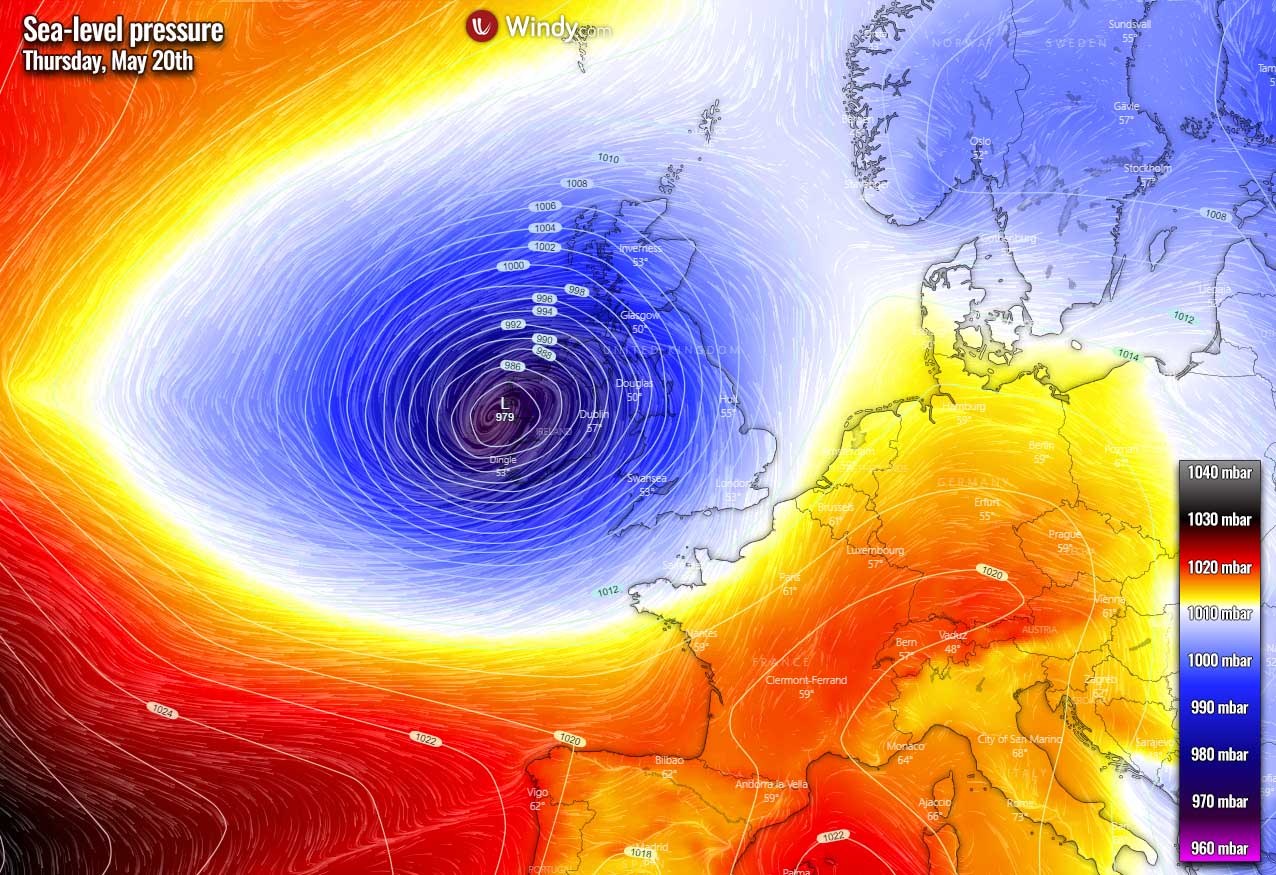 The wind swath of this North Atlantic storm will introduce quite a severe windstorm, spreading across southern Ireland, Wales, and southwestern England. Peak gusts should reach up to 130 km/h (80 mph / 70 kt) and could be damaging as trees now can withstand less wind force than during winter months with missing tree vegetation.

The strongest and most intense wind gusts will remain to the south-southwest of the traveling low, with peak gusts reaching up to 150 km/h (90+ mph) there. 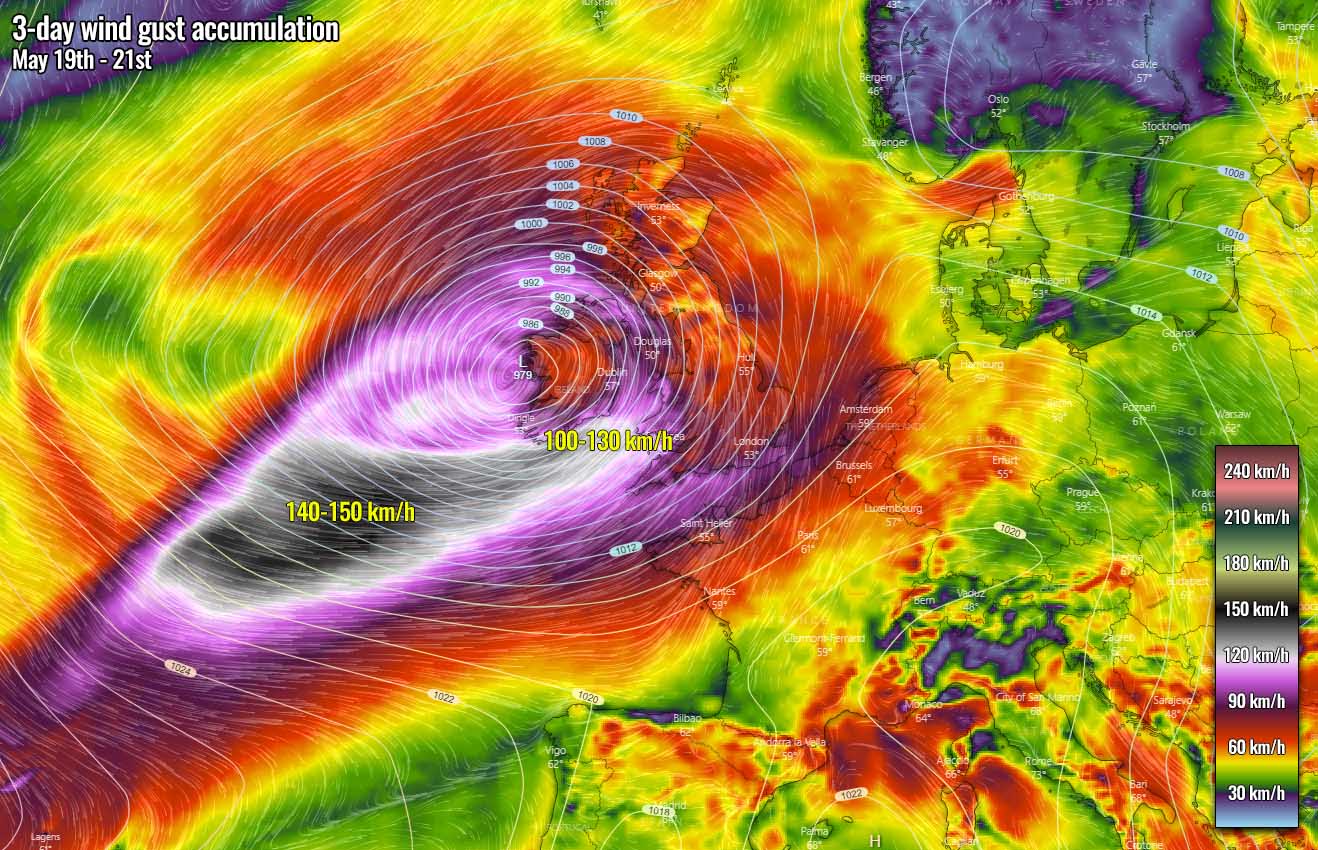 Such a large Atlantic storm and an associated windstorm also lead to waves that will likely generate major heights. Those could be close to 10-12 meters until they reach the southern coast of Ireland, Wales, and southwest England on Thursday. They will be coming from the west-southwest. 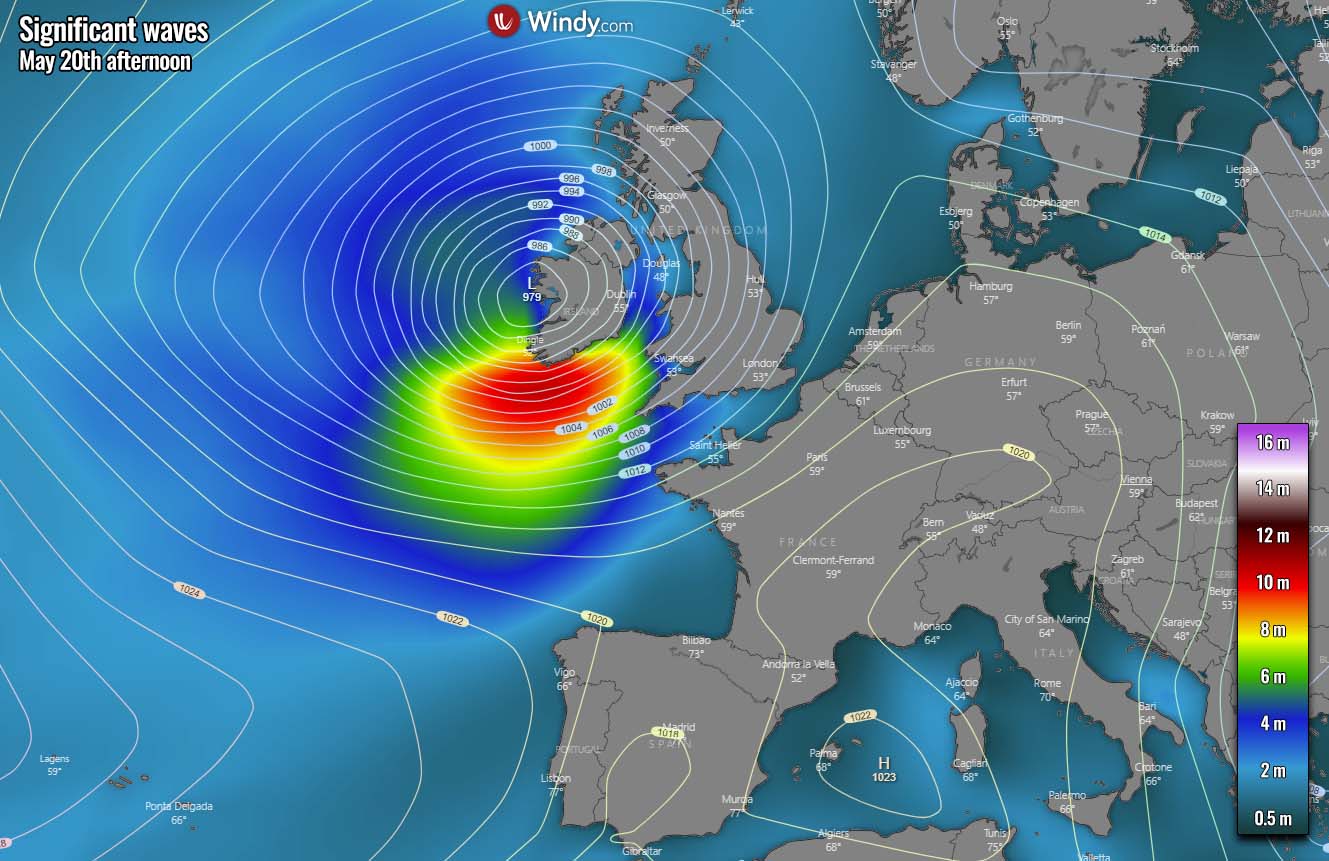 COLD WAVE FOLLOWS IN THE WAKE OF THE LOW

Once the North Atlantic storm matures over western Europe on Friday, it grows quite a lot bigger than during its passage a day before. It basically expands across the whole western and northern Europe, making a connection with the cooler air mass farther north.

The central pressure stays near or just slightly above 980 mbar, centered over England on Friday afternoon. 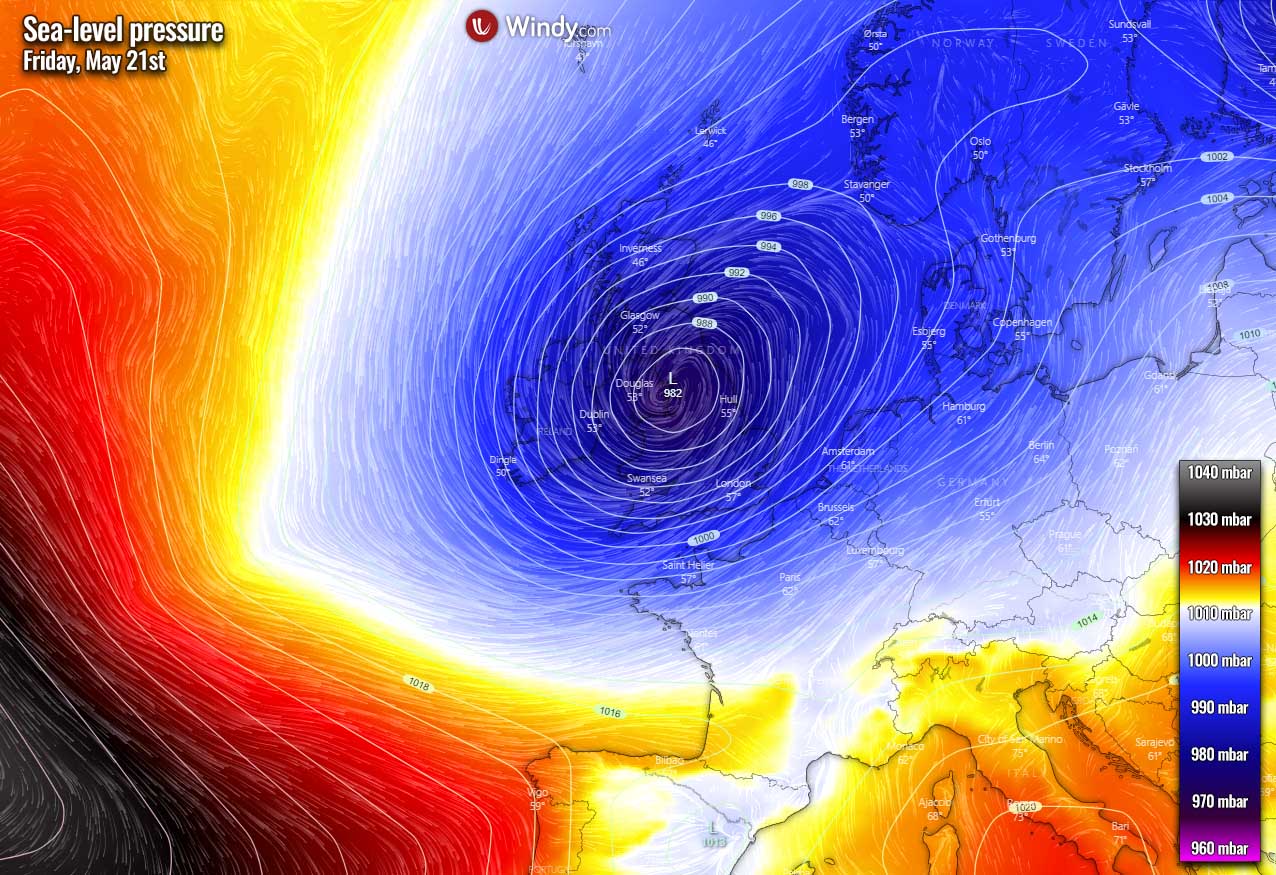 This large low with strong cyclonic circulation brings a lot colder air mass with the north-northeasterly winds between Iceland and northern Europe, gradually spreading across most of the North Atlantic and also across the UK and Ireland on Friday into the weekend.

It doesn’t look particularly warm across the rest of the continent either. A rather near or slightly below the long-term average for the late May period. As we can remember from the recent weeks, it was pretty cool after all. Actually, both April and now also the month of May keep temperatures below normal. For now. 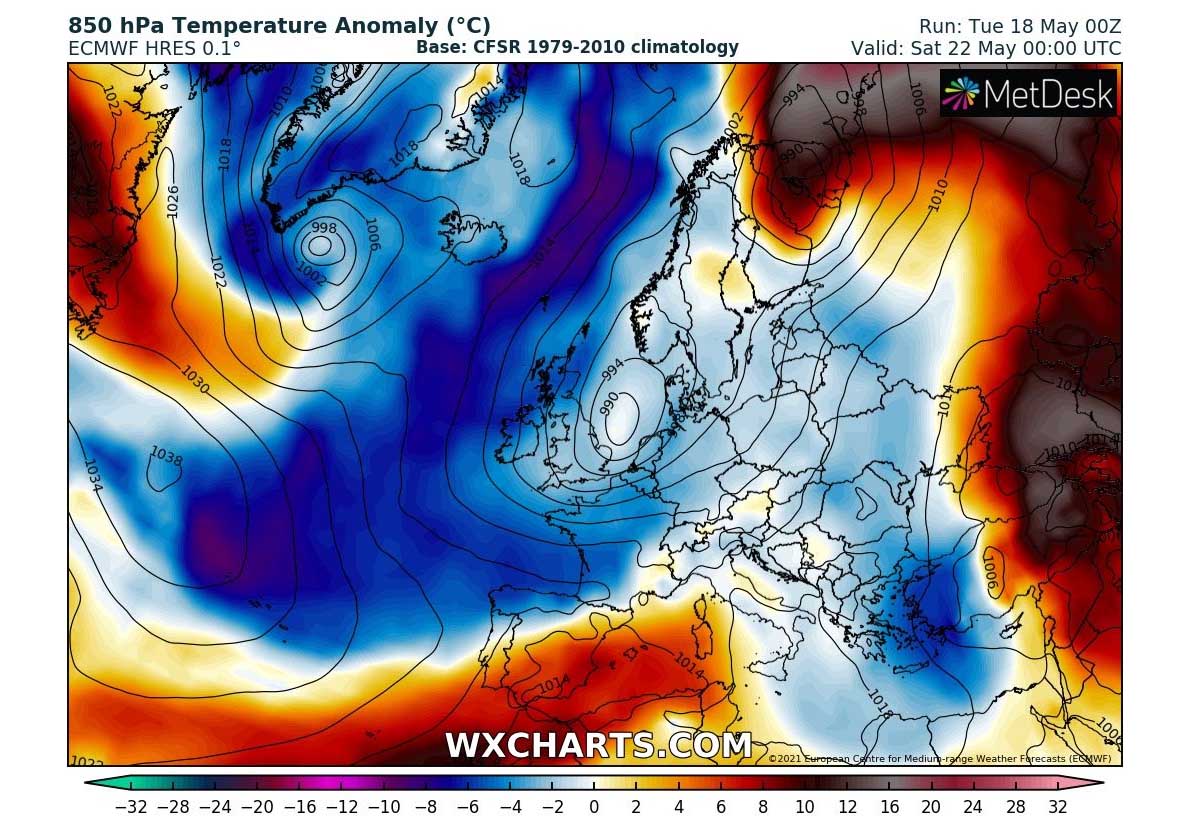 So as we can see, the ongoing weather pattern over Europe surely doesn’t look any close to the early summer touch as one would expect for late May.

However, with some re-positioning of the general upper-level pattern, there might be some hints of a more stable hot weather to develop further south across continental Europe next week. But these are only some minor trends in the distance. Pattern situation needs to be further monitored to see how it evolves across the European continent. 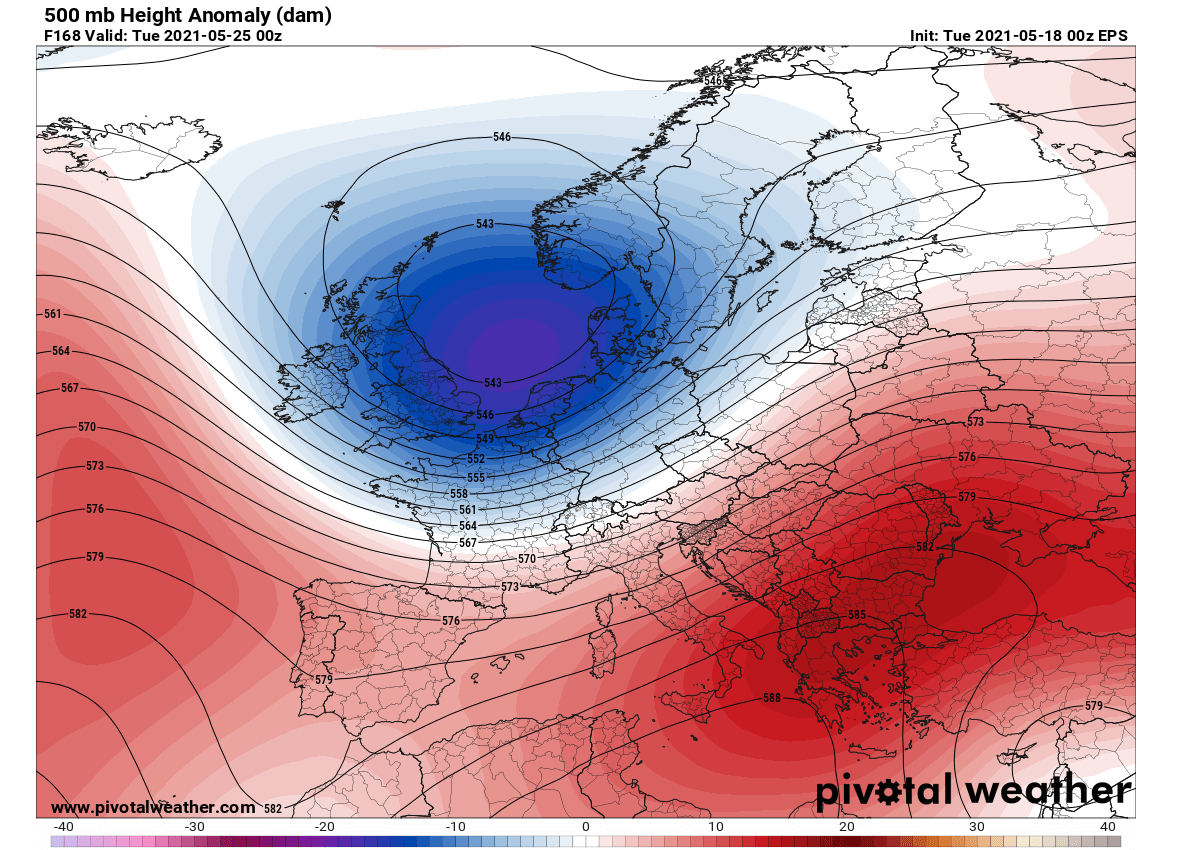