Tropical low #19P (former #99P) which formed in the Gulf of Carpentaria north of Australia, has been upgraded to a Category 1 Tropical Cyclone #Esther today. The system is currently making landfall over the Mornington Island, with maximum sustained winds of 40 knots and 995 mbar central pressure. Esther will continue southwest towards the Northern Territory in the next few hours, gradually weakening back to a tropical depression. It will deliver huge amounts of rain over the northern part of the state, but the main concern is now its potential significant increase once it ejects back to the sea over the weekend.

Satellite imagery reveals a quite impressive structure of the cyclone, severe storms are already brushing the coastal Northern Territory. Esther has grown quite large, having a compact cluster of storms gradually spreading inland.

Cyclone #Esther is currently churning in the gulf of Carpentaria (GOC) working w/ favorable water temps (ssts >30°c) and a evident ULAC ventilating the system. Shouldn’t have to much time to significantly strengthen further before landfall. pic.twitter.com/7rxsngnAxz

Advanced Dvorak Technique (ADT) analysis indicates the area of 34-knot winds is expanded across 50-140 miles radii around the virtual center of Esther (NE, SE and SW quadrants). The analysis is supporting a Category 1 strength.

Tropical Cyclone Esther is now expected to move further inland into Northern Territory and turn due west over the next few days. It is expected to weaken back to a tropical depression, but its main threat will huge amounts of rain and flooding potential.

As said earlier, Esther will now be moving across the northern parts of the Northern Territory state. But its future potential could lead it to a re-intensification over the weekend when the system ejects back to the sea north of Western Australia. Attached are ECMWF and GFS model guidance for the weekend: 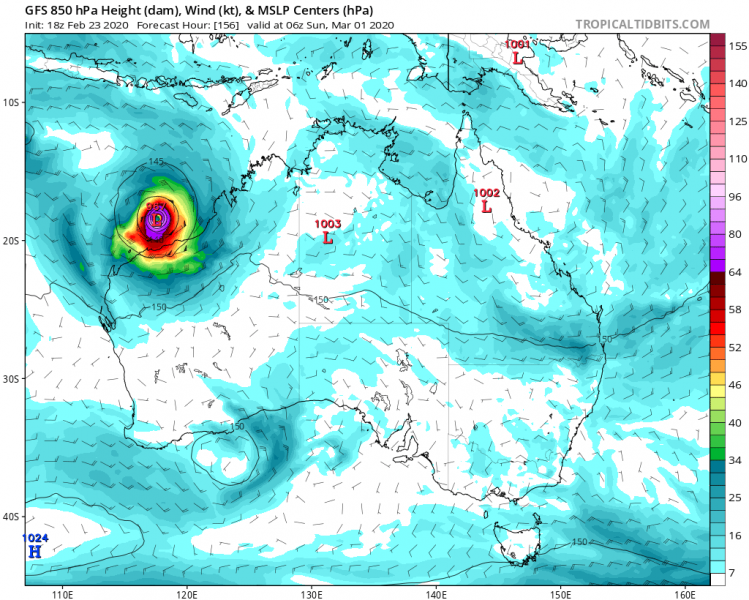 We will continue monitoring Esther’s evolution and will keep you updated – stay tuned!