The new Atlantic depression 92L has intensified into a Potential Tropical Cyclone Nine on Tuesday. It is now located over the Leeward Islands, indicating explosive storms. Models are in a good agreement the conditions should support further development into a Tropical Storm Isaias. The system is on its way towards Hispaniola, Cuba, Bahamas and Florida.

The potential tropical cyclone Nine is currently packing maximum sustained winds of 40 knots (50 mph), gusting to 50 knots. The minimum central pressure is around 1005 mbar, the system is gradually deepening. Environmental conditions are expected to become increasingly conducive for further development of this system and support a Tropical Storm formation within the next 24 hours.

Tropical storm conditions are likely across portions of the Leeward Islands, the Virgin Islands, and Puerto Rico today and spreading westward to portions of the Dominican Republic and Haiti on Thursday. Tropical Storm Warnings are in effect for these areas. Do not focus on the details of the track forecast, as rainfall and wind hazards will extend far from the center of the system.

The details of the long-range track and intensity forecasts are more uncertain than usual since the system does not have a well-defined center and it could move over portions of the Greater Antilles later this week. However, this system could bring some rainfall and wind impacts to portions of Cuba, the Bahamas, and Florida by the end of the week. Interests there should monitor its progress and updates to the forecast over the next few days.

The satellite imagery indicates there are large bursts of convective storms near the virtual center of the low. Further intensification is likely today, the system could become Tropical Storm Isaias. It is quite large in size already. 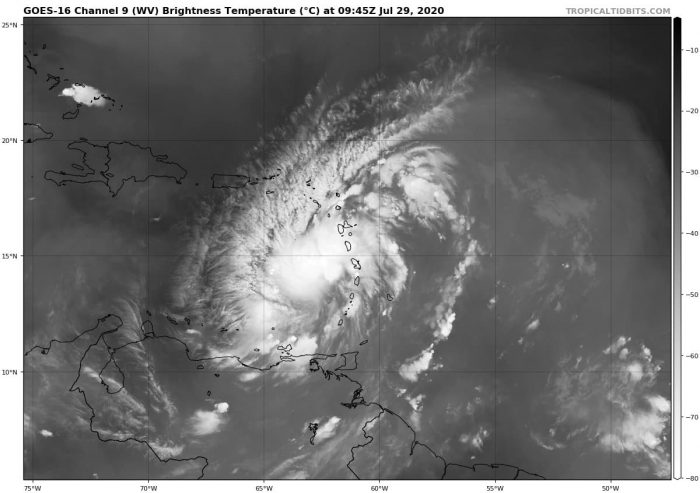 A storm should then head for landfall in the Dominican Republic on Thursday. Explosive storms and very cold cloud tops suggest dangerous flooding threat is developing. 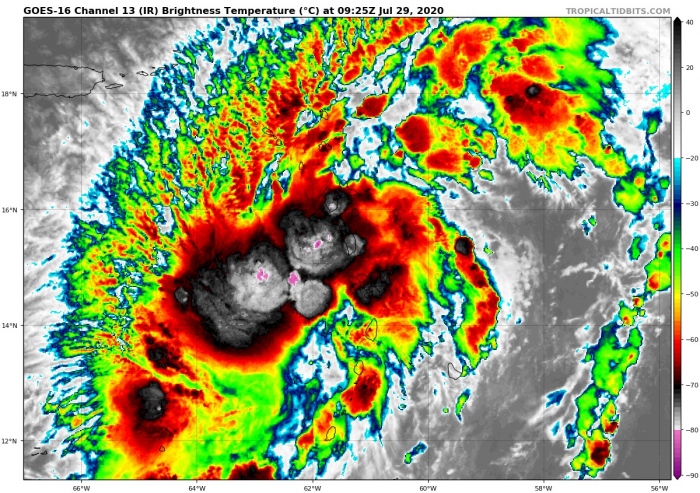 The National Hurricane Center (NHC) is forecasting Tropical cyclone Nine to become a Tropical storm over the next day. The track forecast is towards the northwest, into the Hispaniola first. Then, tropical storm Isaias could head towards Bahamas an Florida over the weekend. 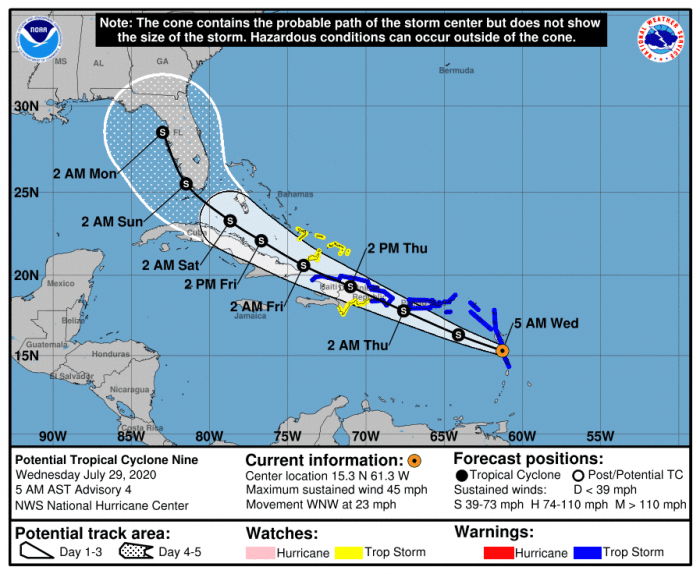 What is important to note is that the future track and system’s intensity is not well-defined yet. Global models are hinting many solutions. Isaias will first impact the Caribbean and Hispaniola. But then, it could get for Cuba, for the Bahamas or Florida. Even the Gulf of Mexico is in the game. Attached is the GEFS (ensemble GFS model) forecast – it is tracking it across the Bahamas north towards US East Coast: 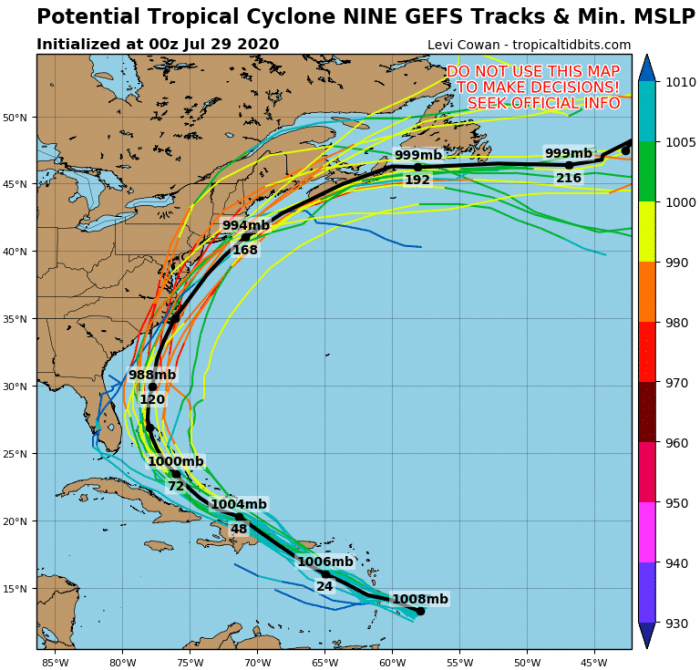 However, models are not in good agreement regarding the storm’s intensity yet. Some are maintaining the tropical storm strength, some are hinting a hurricane strength to develop. Further monitoring is needed, NOAA is already investigating the system with Hurricane Hunters aircraft.

The Ocean Heat content (OHC) chart indicates conditions ahead of the cyclone is very conducive for additional strengthening. It indeed depends on how the system’s core interacts with the crossing of Hispaniola topography. There are high mountains which could prevent significant intensification at some stage.

Storm could turn towards the Bahamas and Florida

While we can see that the GFS model is tracking Isaias towards Bahamas and then the East Coast, other models are not. In majority, they are actually pushing the system along northern Cuba and then curving the track towards Florida or even the eastern Gulf of Mexico: 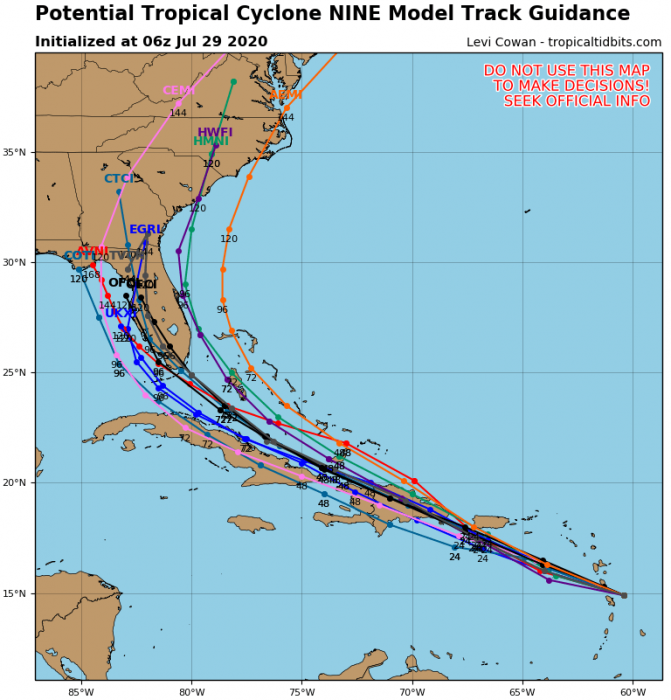 First, the focus is on the developing heavy rain and potentially life-threatening flash flooding and mudslides across the northern Leeward Islands, the Virgin Islands, Puerto Rico, and the Dominican Republic. A lot of rain is expected.

The impact of storm Isaias would then spread towards Cuba, the Bahamas, and Florida. The arrival of the system to Cuba is Friday morning, while Florida or the Bahamas could be reached a day later. 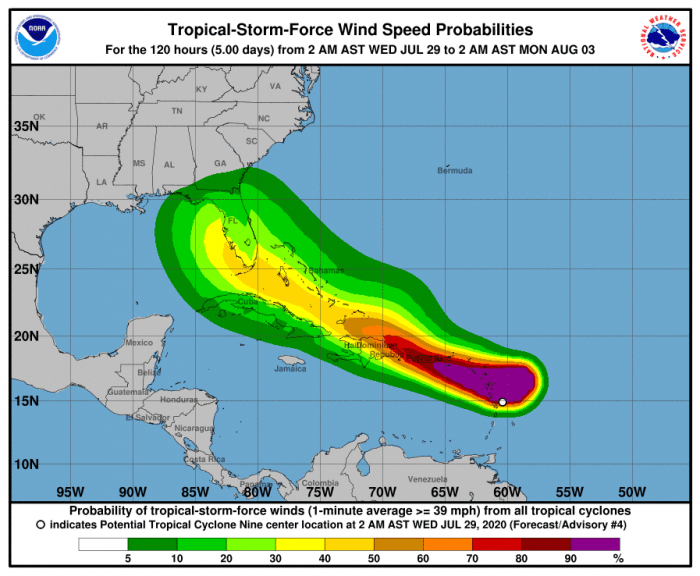 We continue monitoring the evolution of Isaias – stay tuned for updates!